Search the history of over 406 billion web pages on the Internet. 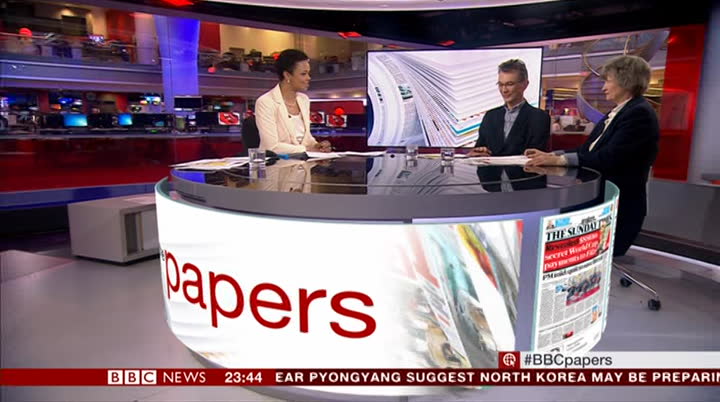 from the outset, it is clear welcome to bbc news. that the real story isn't to do i'm samantha simmonds. very assertive. with what is happening, our top stories: but who knows about what has that's it for the papers tonight. happened and whilst the search for the girl goes on, which is really chilling and very thank you for that. thousands join rival intense, what start to happen rallies in venezuela in support of both the president don't forget you can see the front and opposition leader pages of the papers online as the country's crisis continues. is this community falls apart, dozens of civilians flee the last on the bbc news website. people discover hidden secrets, stronghold of the islamic state it's all there for you — family struggles start to resurface. seven days a week at what i really liked about this is, group ahead of a final assault bbc.co.uk/papers — by western—backed forces. and if you miss the programme any on the one hand, it is a really rescuers find the bodies of two evening you can watch it gripping thriller with an icy chill climbers missing for almost later on bbc iplayer. to it, but on the other hand, a fortnight on a mountain thank you, john and ruth. next on bbc news — the film review. like so many of the films in the himalayas. from asghar farhadi, and american singer r kelly it is about people in close intimate contact, very quietly falling apart is released from jail in chicago and coming apart at the seams. after the payment of $160,000 owed in child support. and it has this mysterious air to it, the title is everybody knows, the question that hangs over the whole film is what does everybody know and who is not saying what they know. i don't think it is his best work, i think a separation is a really extraordinary film, hello, and welcome to but it is very confident, the film review on bbc news. to take us through this week's a very good cast, very well played, cinema releases is mark kermode. but done with the right air of mystery and intrigue, so, mark, what do we have this week? very mixed bunch. and some genuinely chilling moments. we have everybody knows, a spanish language thriller. let's go to border.
11:46 pm

we have border, sweden's entry for the foreign language film oscar. and captain marvel, we've had a spanish drama, now a swedish drama. a female customs officer who can smell fear. the next superhero movie. well done. that is a brilliant synopsis. the less beyond that you know, the better. a story by the writer well, everybody knows, of let the right one in, which tells you there may be some a spectacular cast for a start. supernatural elements. from the director of a separation, comes with great pedigree. which was good. penelope cruz is laura, absolutely brilliant. who lives in buenos aires and comes back to spain, to her hometown for a celebration, she's a border guard, and she brings her teenage daughter, she can smell trouble, who very quickly starts hanging she feels like she is an outsider, considered all her life there's around with a young boy something wrong with her, then she meets a man who seems to be a kindred spirit. who tells her that many years ago, and together, they discover that actually, the world may not be her mother was in love with paco, as they thought it was. played by javier ba rdem. she asks who knows, and he says everybody knows. shortly after, during the celebration, the daughter i don't want to say any more disappears. than that, other to say if you are a fan of the films has she run away? has she been kidnapped? of david cronenberg, text messages suggest have enjoyed things like splice, that the latter is true. but there is also immediately a concern about who knows what. if you like that norwegian film here is a clip. by andre, a strange mixture of documentary and fantasy,
11:47 pm 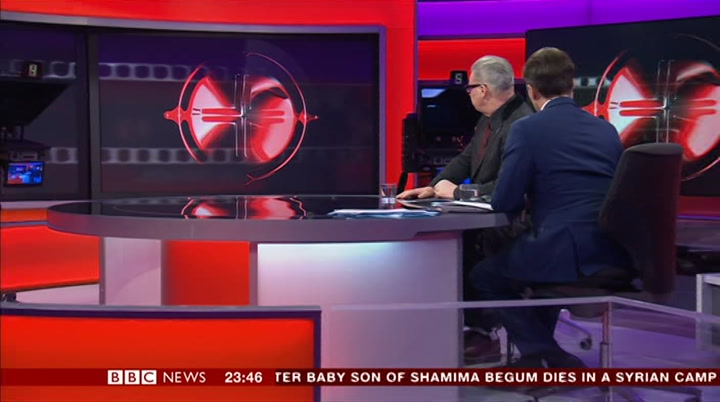 this has all of these things, but the most important thing is the less you know about where the story is going, the better because halfway through, people have used the term fairy tale, it is like a dark fairy tale but grounded, rooted in reality, and it's really about identity. the same way that moonlight was full of that question, "who are you?", this begins with "who am i?" and it is a fantastical story about identity that is grounded in reality. although it is not perfect, there are things in it that genuinely i did not see coming. i was really surprised. and impressed by being surprised. fantastic. captain marvel. many different incarnations of captain marvel over the years. brie larson is the intergalactic warrior with human memories who crash lands on earth in the 1990s, an age of blockbuster video and cd—roms, computers where you go away and make a cup of tea and come back and they are still turning on. she goes head—to—head with ben mendelsohn as a shape shifting alien and she crosses paths
11:48 pm 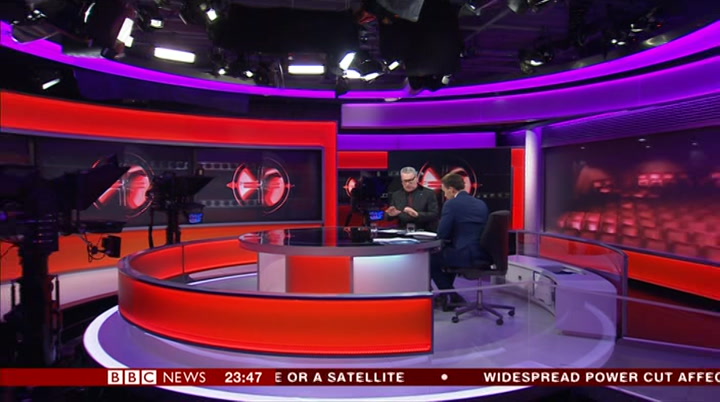 with a younger nick fury. the directors for this, co—directed, they come from a very indie background, but of course, since it's a marvel picture, there has to be action. here is a clip. the train is heading for a tunnel up ahead. let's greet them at the station.
11:49 pm 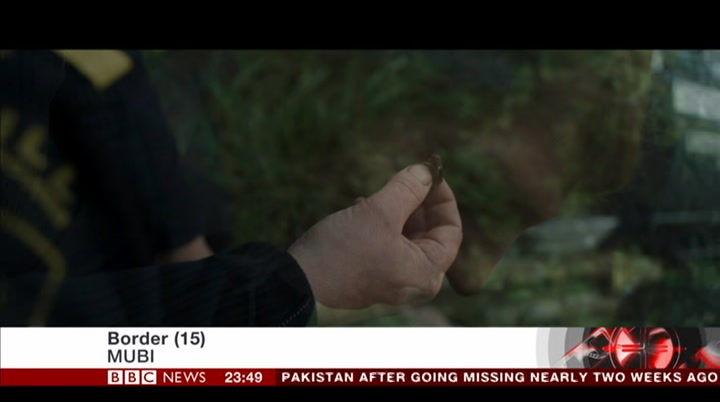 i was thinking how many films have there been featuring a fight on the top of a train. i can think of at least three. but here's the thing. you have to have the action sequences, that is what the marvel movies do. this was made by the directors of half nelson and mississippi grind. you look at these kind of movies directed by the indie directors, they bring some of that indie sensibility into the film. you get a great big blockbuster, but it has something else. i think the co—writers and directors have done that to some extent. i would have liked to have been odder and more indie. i think there are some problems with the narrative. it is an establishing story and there are a lot of beats you have to hit. that said, brie larson is terrific in the title role. great to see here. it is a good cinematic role model,
11:50 pm 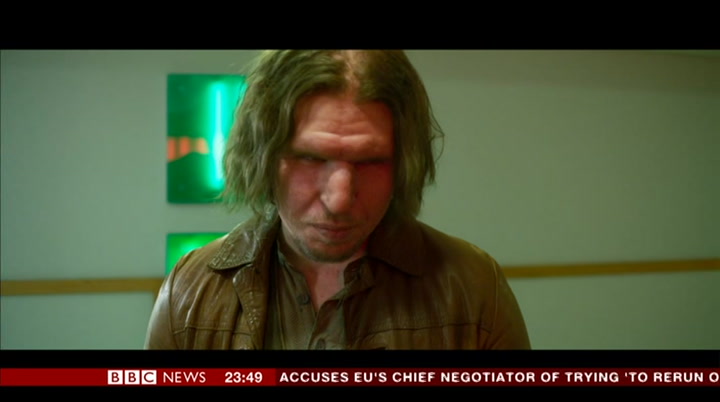 the times are changing. sam jackson, brilliantly de—aged digitally by 25 years, something i would really not mind if they could do that to me. you and me both. back in my mid—305, it was fine. it is fun. i wanted it to be darker and stranger, but it is not that kind of film. it feels very upbeat and fun, and brie larson is really terrific. it is fine, enjoyable, i know many people who really loved it. i liked it. i didn't love it, but i liked it. it is fine. when you say it like that... it is fine. honestly. best out. fighting with my family is great. i really like it. based on the true story of a wrestling family from norwich. a young girl goes to america the join the wwe. florence pugh is dynamite as paige. the rock is in it. he's also the producer. he was sitting at home in the uk,
11:51 pm 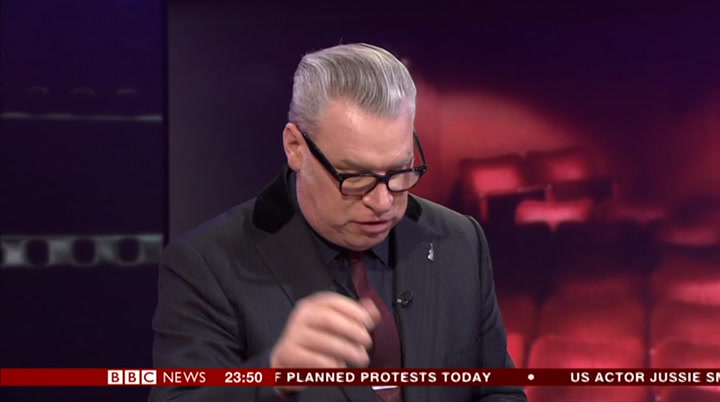 and he watched a channel 4 documentary about the family and thought that would make a feature film and it really has. it went to number one at the box office. my best out. i thought the aftermath was really good, which you really didn't like. that goes to show you all criticism is different. it'sjust opinion. i think the aftermath looked great, itjust didn't have quite the substance. not amazing, but good. best dvd. at the end of awards season, rami malek winning all the awards for bohemian rhapsody and whatever else one may think of the film, this performance is terrific. i saw queen at hyde park in 1975. you see him on the screen. he wasn't even born then. i think it is a brilliant performance. there are other things wrong with the film. hats off to dexter fletcher for saving it. it takes liberty with the stories. the criticism is they kind of slightly whitewashed this version of freddie. i think it takes a story and then
11:52 pm

bends it to its own dramatic purposes. certainly moving things around in terms of the chronological narrative. but find a recent biopic that hasn't. i think the dramatic liberties are ok. i do know the real story because i was quite a queen obsessive for a while. i think his performance was great. and the music is astonishing. the live aid, 20 minutes at the end. it is funny because the first five queen albums were great, and i tailed off, but you watch it and you think, this is like the abba songbook, every single one of these are hits. it was fun. very enjoyable. that's it for this week, though. thanks for watching. goodbye.
11:53 pm 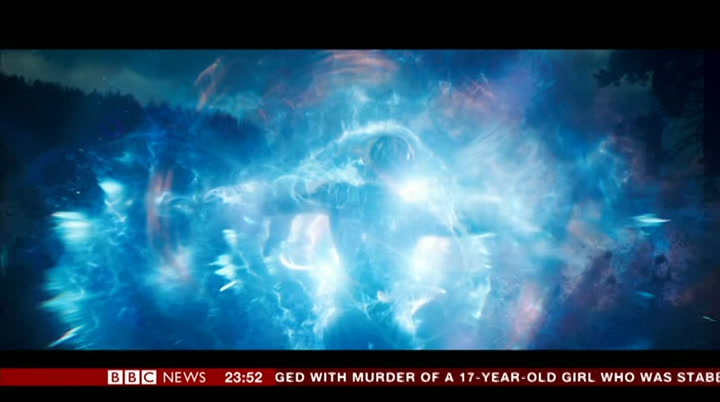 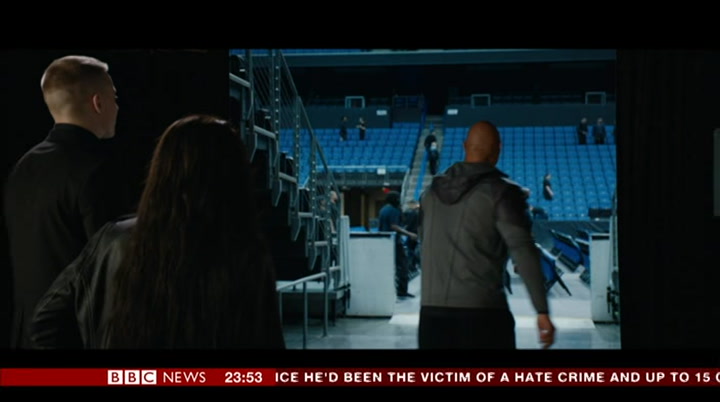 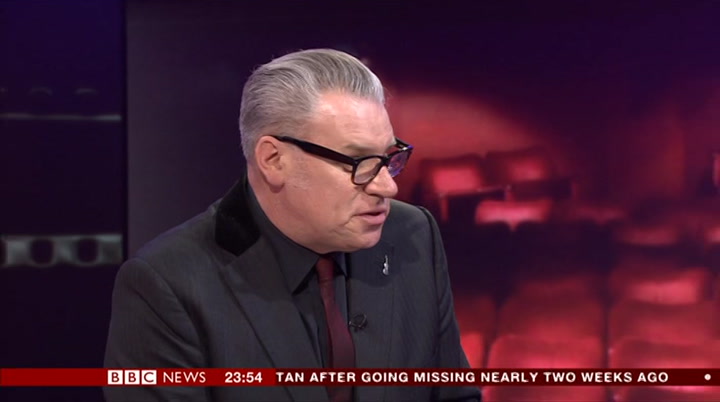 temperatures widely into single figures. the showers will have a wintry flavour mixed in as well. a chilly start to our monday morning but a relatively quiet one. they will be some decent spells of sunshine coming through, northern england not looking too bad but by the end of the day on monday we will start to see some wet and windy weather pushing in from the atlantic. so a deep area of low pressure. this could potentially become a named storm and if that happens it will be gareth. it will bring some wet and windy weather across the country. the rain moving its way south and east during tuesday morning, leaving a trail of wintry showers behind, and not particularly warm with it. maximum temperatures on tuesday look likely to be in single figures at around seven — nine degrees. it will be increasingly unsettled over the next few days, rain and wind very much a feature.
11:56 pm 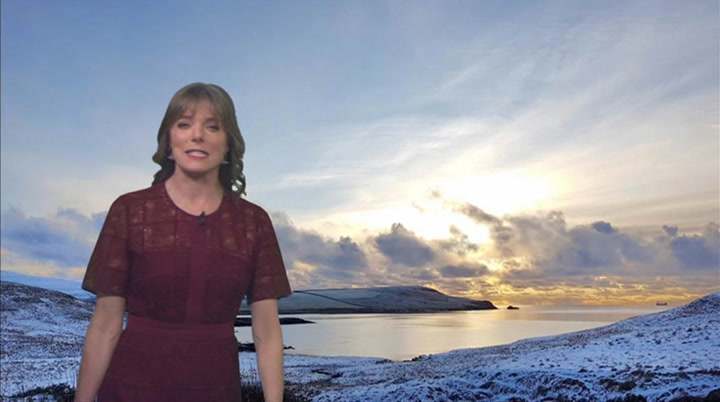 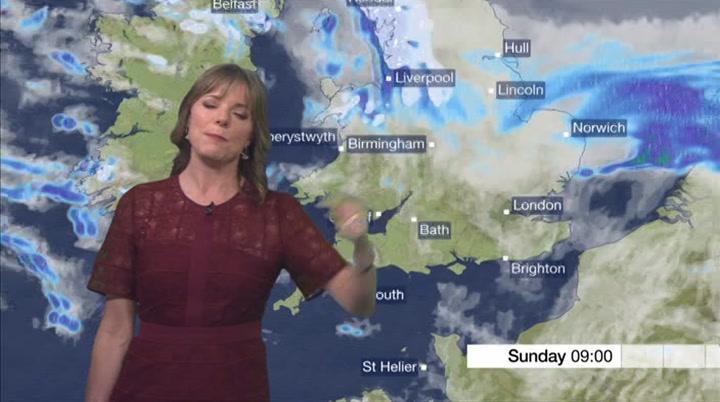 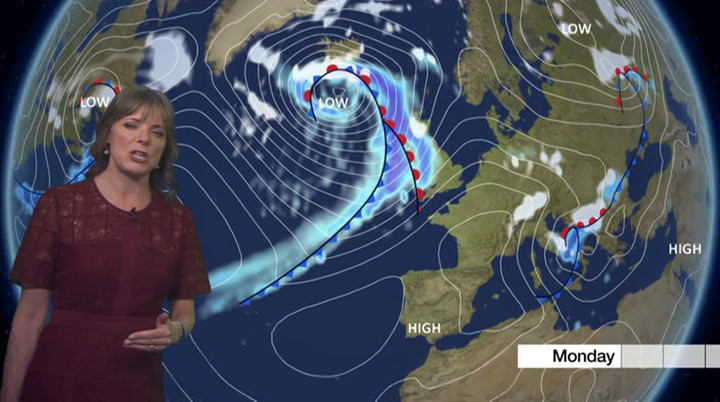 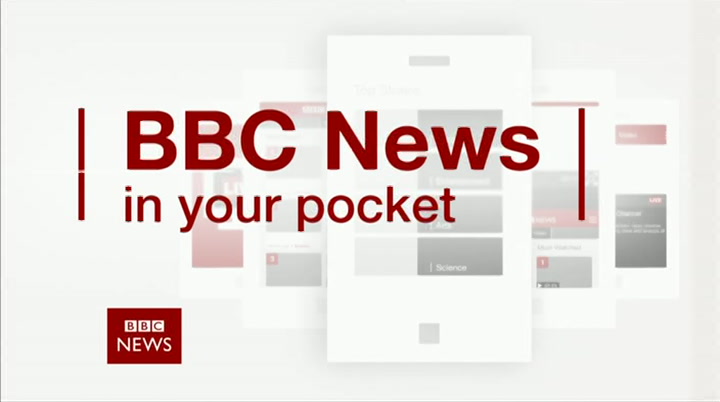 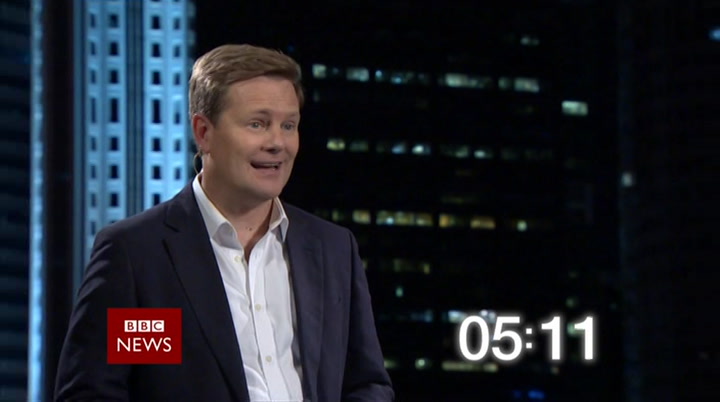