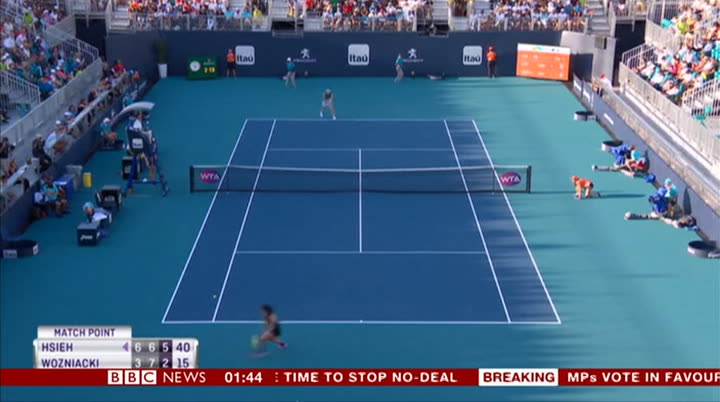 welcome to bbc news, broadcasting to viewers in north america and around the globe. my name is duncan golestani. our top stories: and hseih shines once again in miami, beating former world number one caroline wozniacki in a three—set thriller. british mps vote to take control over brexit. the ayes to the right — 329. the noes to the left — 302. hello and welcome to the programme. we start with football, and there were seven european championship qualifiers on monday. they'll now consider a series they included another comprehensive of alternative plans — with critics condemning win for england who followed up the prime minister's approach friday's 5—nil win against as a "national embarrassment". the czech republic with a 5—1 victory in montenegro. it was the home side explosion. who score first, after just 17 minutes, with a fine curling shot after israeli airstrikes across gaza, palestinian militants retaliate, firing a barrage of from marko vesovic. rockets into israel. but after that, it yemen's humanitarian was one—way traffic. catastrophe worsens, michael keane equalised for the visitors, before ross barkley scored either as the civil war enters its fifth year. side of the break to make it 3—1. there were further goals for harry kane and raheem sterling — his fourth in two games — as england made it two wins out of two, scoring 10 goals in the process.
1:46 am 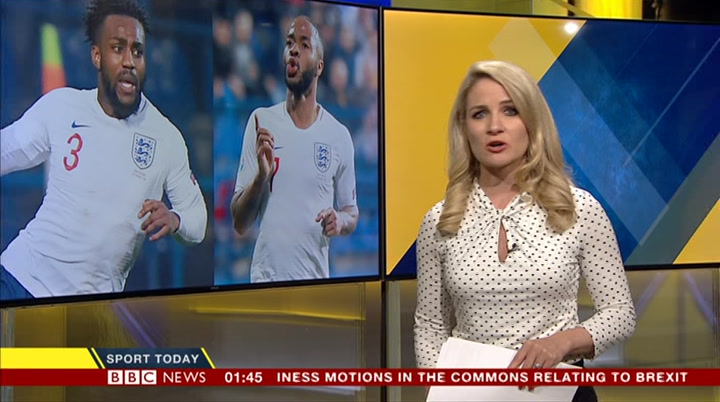 england's victory was marred by racial abuse directed at danny rose and raheem sterling by a section of montenegrin supporters. the england manager gareth southgate said the incidents would be reported to uefa. sterling, himself, says it overshadowed the result of the match. it was a shame really because it massive performance on a difficult ground. there were some great performances today. but, you know, a couple of idiots — mind my language — buta couple of idiots — mind my language — but a couple of idiots ruined the night. it is a shame we're talking about this. it is 2019 and they should be a real punishment for this, whoever they sue people were need to be bad but it needs to be a collective thing.
1:47 am 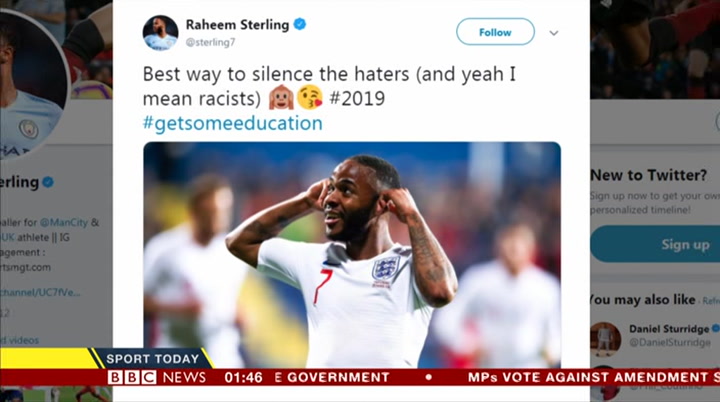 sterling later tweeted a picture of his goal celebration with the words "the best way to silence the haters — and, yes, i mean racists". he added the hashtag "get some education". england's win in montenegro means they're four points clear of bulgaria who had to settle for a 1—1 draw in kosovo. elsewhere, it was a frustating night for the defending champions portugal. they lost cristiano ronaldo to a suspected hamstring injury in the first half of their group b game against serbia, and needed an equaliser from danilo pereira to salvage a 1—1 draw. ukraine are the new leaders of that group after a 2—1 win in luxembourg. in group h, the world champions france thrashed iceland 4—0 with goals from umtiti, giroud, mbappe and griezmann. cenk tosun scored twice as turkey beat moldova also 4—0. and albania won 3—nil in andorra. on to tennis — and there's been a shock defeat for caroline wozniacki at the miami 0pen. the number 13 seed was beaten in three sets by hsieh su—wei of taiwan.
1:48 am 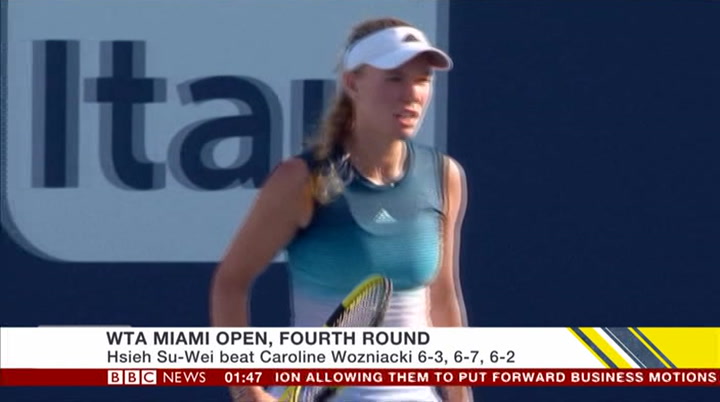 wozniacki battled back from losing the first set, to take the second on a tie—break. but hsieh, who reached the semi—finals in dubai in the year, raced through the decider 6—2 to seal her place in the last eight. and she'll now play estonia's anett kontaveit who beat bianca andreescu. the estonian was a set and 2—love up against andreescu when the canadian who won the indian wells title two weeks ago as a wildcard, was forced to retire with a shoulder injury. it brought an and to her 10—match wining streak. the number 2 seed simona halep is also through to the quarter—finals. halep, who's never got beyond the semi—finals in miami, came through in straight sets against venus williams, who's won the title there three times. the romanian won 6—3, 6—3, to seal her place in the last eight for the third time in four years.
1:49 am 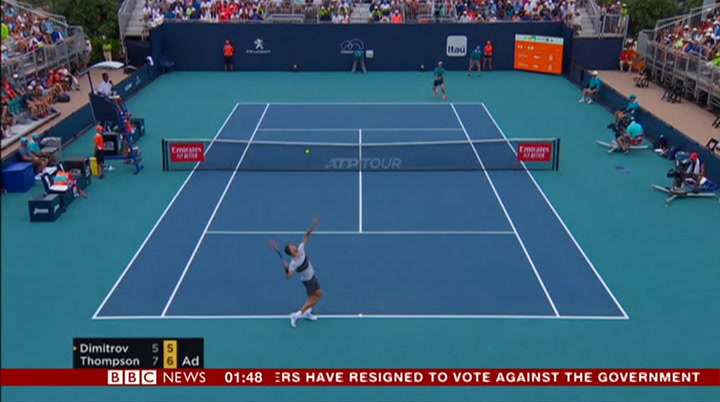 in the men's singles, there was a shock defeat for the number 2a seed grigor dimitrov. the bulgarian was beaten in straight sets byjordan thompson. the australian, ranked 77 in the world, won 7—5, 7—5, to reach the last 16. meanwhile, roger federer remains on course for a fourth miami masters title. the number 4 seed is through to the fourth round after beating serbia's filip krajinovic in straight sets. federer, who last won the title there two years ago, recovered from being a break down in the first set, to win 7—5, 6—3, and he'll now face russia's daniil medvedev in the last 16. he's the nfl star with the party boy persona but rob gronkowski has called time on his nine year career at the age of 29. his announcement came
1:50 am 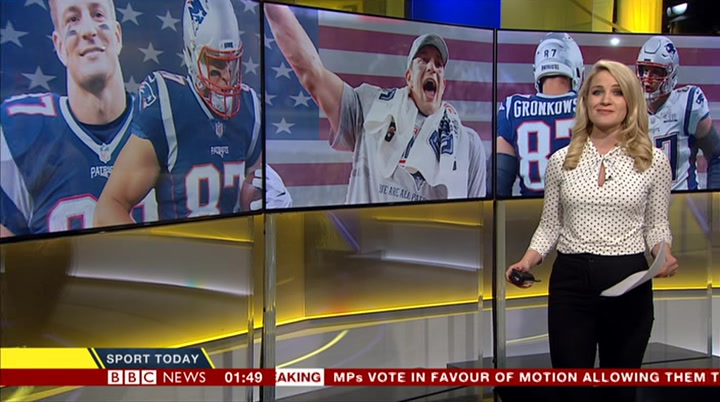 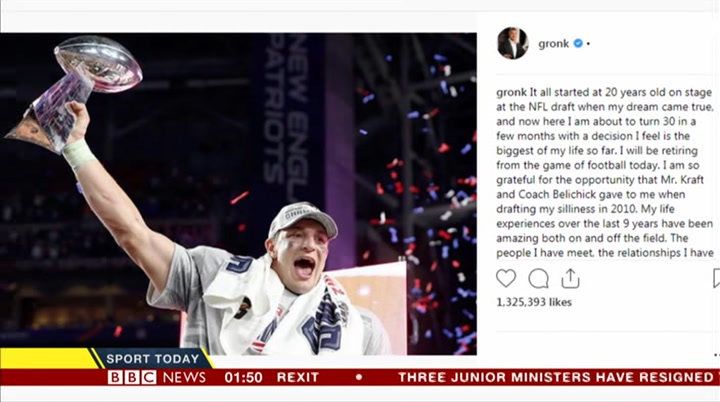 true. his draft brought a life changing experience. a sentiment typical of this player's approach of life at the top. parties, dancing, tv commercials, he has made headlines on and off the field. some believe his next move could be into pro wrestling but his fun loving character made for menace on the field. quick feet in the finish saw him score 73 touchdown in his career. he says that these incredible memories make way for an uncertain future. now he fans around the world wait to see what is next. mike trout has signed his 12—year contract. you might have heard about it — it's worth over $426 million he appeared before fans on sunday outside the los angeles angels' stadium in anaheim to celebrate. and emotions were bared
1:52 am 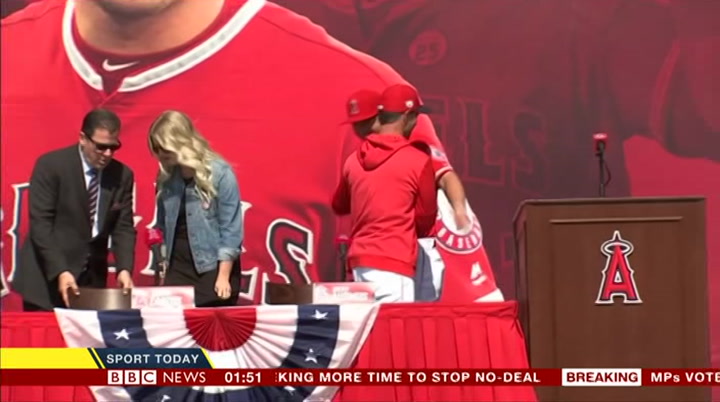 as claire thornton reports. when you have just signed a contract for almost $427 million, it is understandable to get a little choked up. the last couple of weeks, three weeks, we got it done. my wife, family... cheering and applause. i love you guys, thank you for all the support. i'm losing it. not much talk of losing it in los angeles. the angels fans without a world series title since 2002 are in ra ptu res over a deal world series title since 2002 are in raptures over a deal which is landed trout for the rest of his career. he is so down to earth and humble. he just wants to win and he is a mental
1:53 am 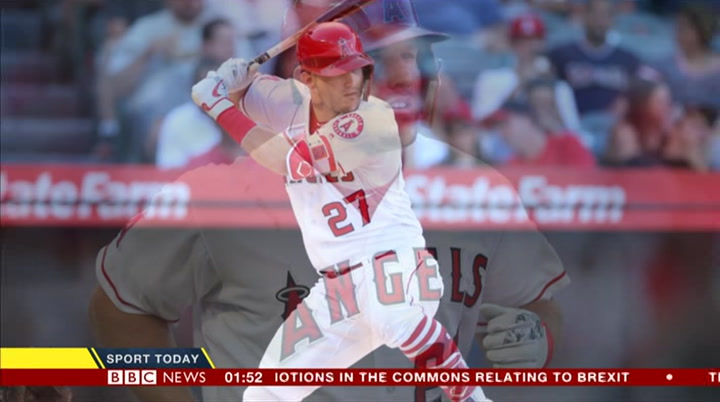 and leader to his team and the way he reaches out to the fans and kids is incredible, you will never find another mild trout. his numbers are exceptional. a seven time all—star. a major header in baseball. coming from newjersey, was lured away to philadelphia. obviously a lot of talk about going back east and back to philly... but i enjoyed every minute being here and this is my home. cheering and applause. i love it. a lot of things went into it. i think the direction of the franchise is big for me, if it was going the other way i would have considered going but it never crossed my mind. i was going but it never crossed my mind. iwas an going but it never crossed my mind. i was an angel for life. now the challenge is to make the angels are consistent contenders in the player.
1:54 am 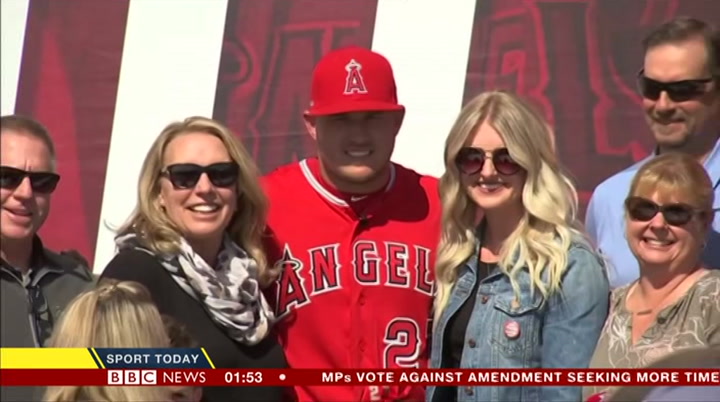 just one pro season appearance in the last nine years does not make happy reading for the fans but now they have the most expensive sportsman in the sport they will be looking forward to success. $426 million! that is hard to believe. the belgian cyclist thomas de gendt won monday's opening stage of the volta a catalunya. the lotto—soudal rider launched a solo attack to take victory by a massive two minutes and 38 seconds. the victory was de gendt‘s fourth career stage win in the event. germany's maximillian schachmann finished in second place. you can get all the latest sports news at our website. — that's bbc.com/sport. but from me and the rest of the sport today team, goodbye.
1:55 am 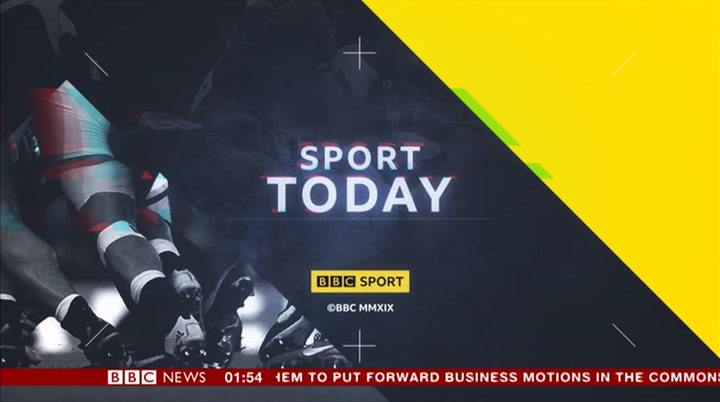 hello there. if you like your spring weather dry, i think you will find plenty to like about this weather forecast. very little rain in the forecast for most of us. we will see dry weather. sunshine amounts will vary. often i think there'll be quite large amounts of cloud but the temperatures as we head towards the end of the week will start to creep upwards. high pressure in charge of the scene which is what's keeping things settled and as i run the sequence through the next few days, this high—pressure barely moves. so for most of us, things stay dry and quiet. up to the north, notice frontal systems scraping into northern scotland so here we'll see patchy rains at times and it will be breezy. we start tuesday for many on a chilly note and towards the south with the lion's share of the clear skies but also the best of the sunshine through tuesday morning. the further north and west you are, the more cloud there is likely to be and across the north—west of scotland, outbreaks of patchy
1:56 am 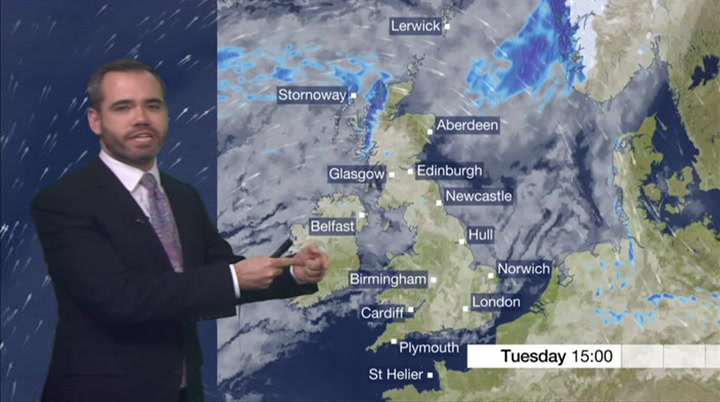 rain, quite breezy in northern scotland as well. elsewhere cloud thicken up to squeeze out the odd large shower but the vast majority dry. the afternoon brings a mixture of patchy cloud and sunny spells and temperatures generally between 11 and 14. get into some sunshine, that will feel quite pleasant. into tuesday night, we will see fairly large amounts of cloud and where it breaks up for any length of time, we are likely to see mist and fog patches developing. as a consequence of all the cloud, it's probably not going to get particularly cold. but if you do keep clear starry skies overhead for a time, don't be surprised if we do get a touch of frost. wednesday, very similar day. a mixture of cloudy areas and sunny areas. probably brightening up for many places. for scotland, again, we will see some outbreaks of rain. those temperatures may be up by a degree also. 12—15 degrees. high pressure still with us as we move out of wednesday into thursday. not many white lines or isobars on the chart but what wind
1:57 am 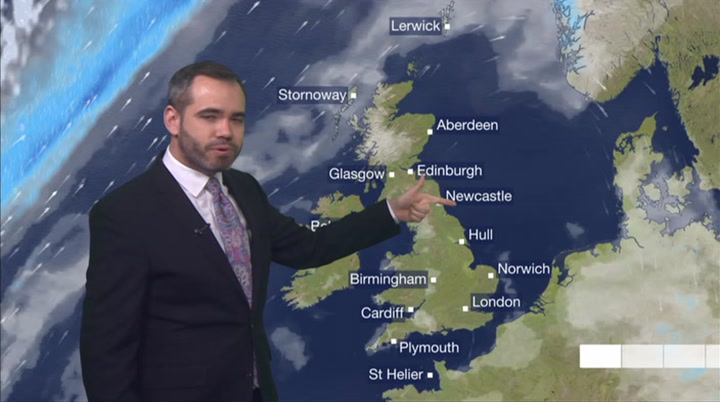 there is will be moving in a clockwise direction. that will introduce a south or south—westerly flow across much of the uk, bringing some slightly milder air. a mixture of patchy cloud and sunny spells once any early morning fog clears. sea breezes developing around the coast of eastern or southern england and those temperatures, by this stage, up to 16 or possibly 17 degrees. as we look further ahead, friday is going to be another mild if not warm day. again, we should see long spells of sunshine. as we get on into the weekend, it looks like thing will turn a little bit cooler. but most of us, it will be predominantly dry. that's all from me for now.
1:58 am 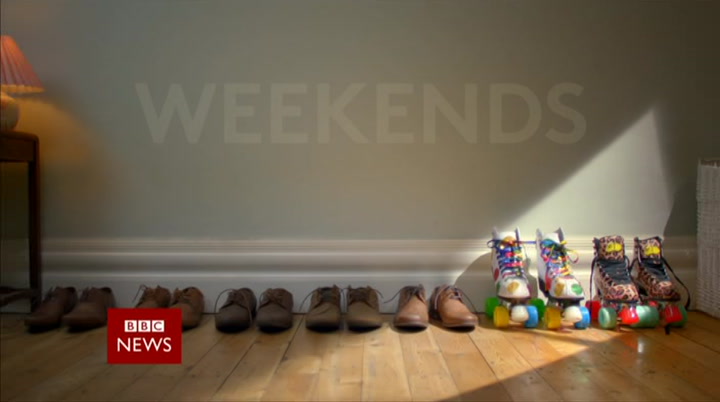 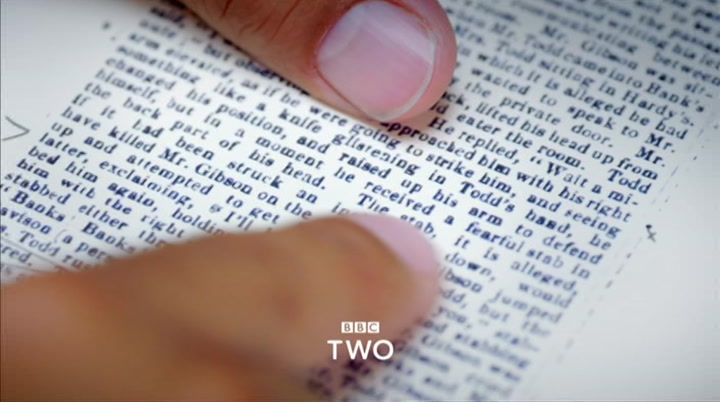 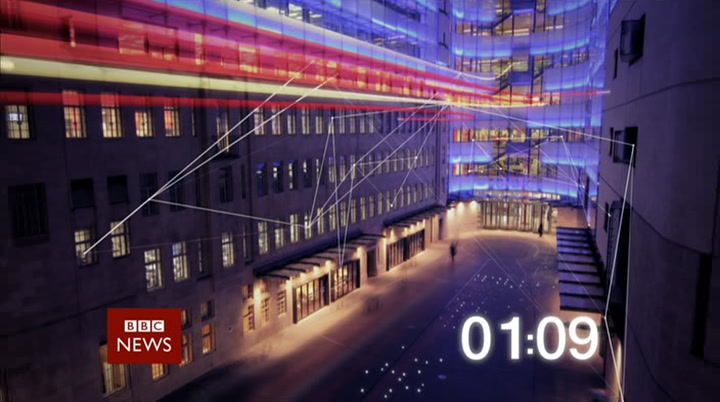