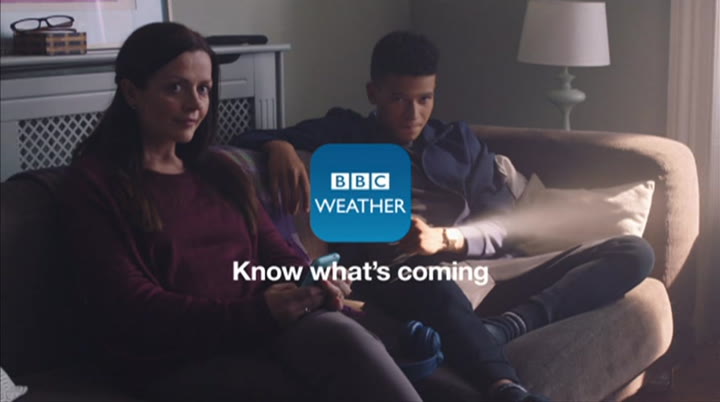 this is the business briefing. i'm sally bundock. continental drift. fears grow for the state of the european economy as german exports prepare to/ growth forecast. plus back to jail. the exit nissan boss carlos ghosn is rea rrested at exit nissan boss carlos ghosn is rearrested at his home in tokyo after new financial misconduct allegations. he had been out on bail since last month. and asian shares are holding an eight month high as investors wait optimistically for news on the china us trade talks upon reports that roadsides are
5:31 am 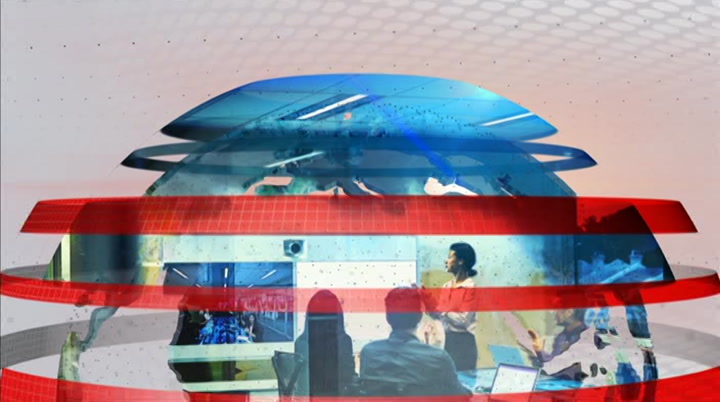 close to a deal. we begin with germany where prospects for growth will be slashed. adding to growing concerns about the state of the european economy. manufacturers across the region are slowing with a —— struggling with a slowdown in emerging markets, trade tension with the us and the uncertainty over brexit. factories in countries that share the euro had their worst month in almost six years in march according to the monthly survey. the survey for german factories in particular was even worse, at the wea kest level since particular was even worse, at the weakest level since the height of the eurozone debt crisis in february
5:32 am 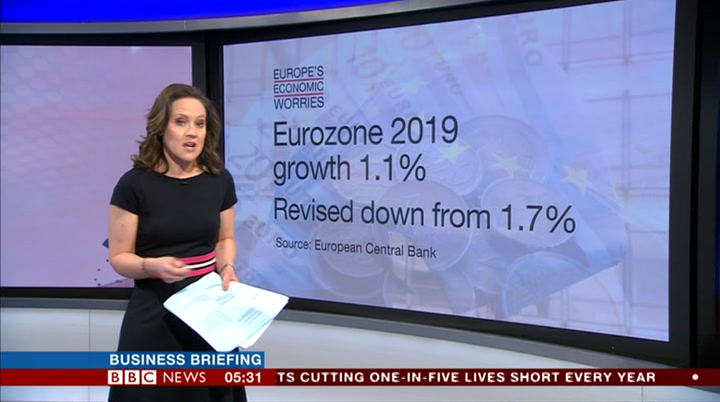 2012. the eurozone central bank has slashed predictions for growth gci’oss slashed predictions for growth across the region this year to just 1.196. across the region this year to just 1.1%. back in december it predict that 1.7%. it has signalled that already record low interest rates will stay on hold for the rest of the year as well as announcing stimulus measures to encourage banks to lend more. the vice president this week warned that britain leaving under a hard brexit could make things much worse for the reason. the absences of clarity continues to lead to policy uncertainty. thanks to the private secretary —— sector a no deal scenario poses risks. other scenarios remain which could generate adverse effects if they
5:33 am 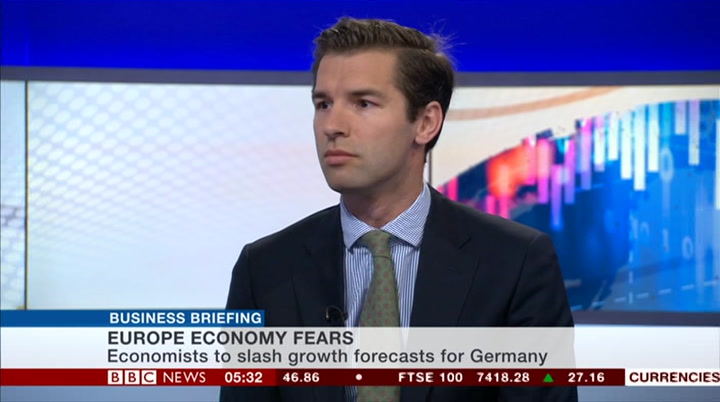 interact with risks. with us we have florian hense. we already mentioned angela merkel meeting with the irish prime minister today. she as well as the ecb are concerned about how brexit is going but what is your take on the german economy and the numbers we will get today. it is struggling, isn't it? yes. german industry is in a recession. is that the german economy is not in a recession. it is a mixed picture if you look at germany. manufacturing sectors are suffering badly with the trade tensions and a hard brexit risk but the service side of the economy, which is driving more consumption, the labour market has shown to be relatively resilient which is encouraging. the question is how long this can continue for. to what
5:34 am 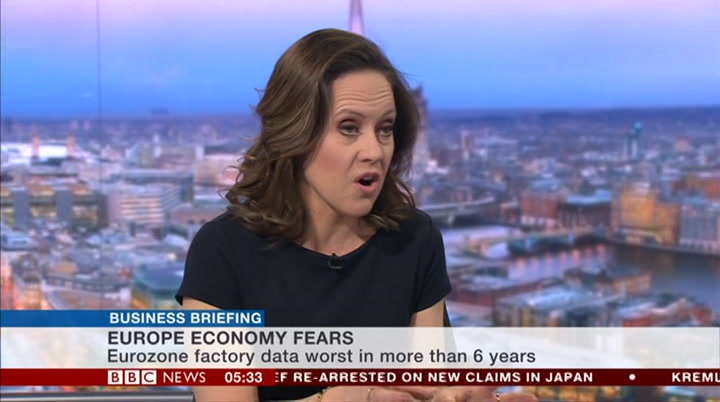 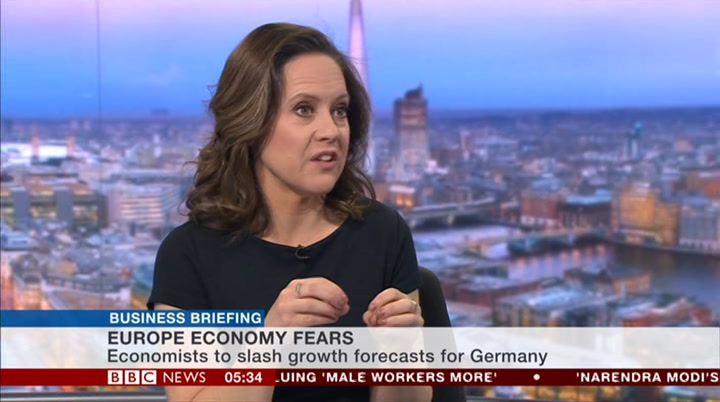 authorities may actually manage to boost the economy. you mention some keyissues boost the economy. you mention some key issues there but also they are watching closely talks and discussions between the eu and us regarding trade. that could have serious indications for germany if it went against the europeans. atley. there may be improvement on the us china front but we are still waiting for donald trump's decision by the end of may to respond to this commerce department report which could say german exports, car exports, are a national security threat to the us economy. obviously that would make things much worse and you would crash that kind of positive sign that we have seen in some leading indicators to the other side. thank you so much for coming in. there are many headwinds for germany and some of the other key economies in europe. let's move now
5:36 am 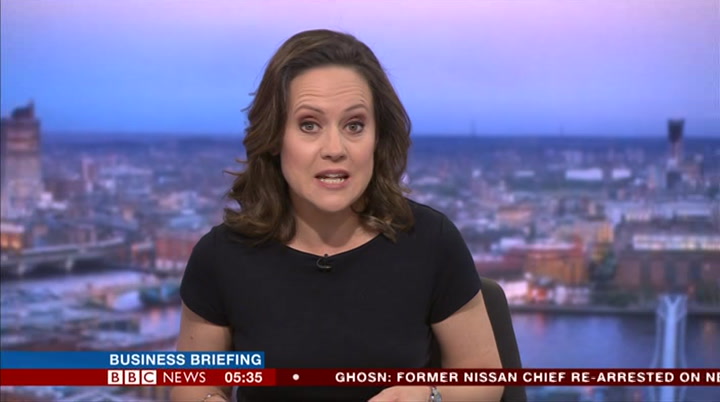 to boeing. in a few hours time the ethiopian transport authority is expected to give an initial resort on the crash of an ethiopian airlines boeing 737 last month. aviation regulators around the world have granted the jet following the crash which came less than five months after another involving the same model belonging to an indonesian airline. investigations have centred on the plane's anti— stall software and they're already report that it may have been to blame. what seems to be emerging thus far, you are talking about the ethiopian crash, the pilots initially seem to have turned off the anti— stall system that was pushing the nose of the aeroplane down. this was shortly after it took off from the ethiopian capital. the pilots then took over manual control and tried to stabilise the plane but that did not seem stabilise the plane but that did not seem to work. perhaps, we don't entirely know. so they decided to
5:37 am 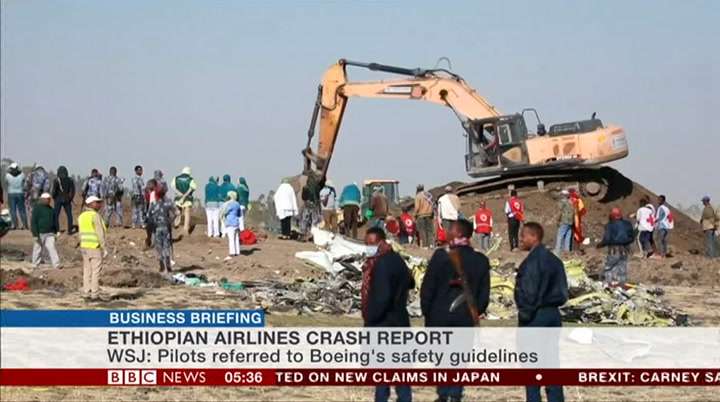 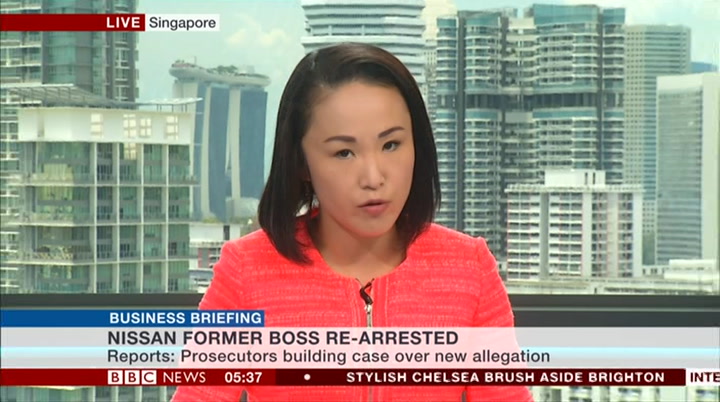 came out and we got confirmation he was rea rrested. came out and we got confirmation he was rearrested. he has since released a statement criticising his rea rrest released a statement criticising his rearrest calling it outrageous and he said it was part of another attempt by some individuals at nissan to silence him by misleading the prosecutors because it comes within 2a hours since he made his first ever tweed in which he said that he will be holding a press conference next thursday on april 11, which i assume will no longer be taking place, to tell the truth about what has been happening. it has been reported that amid the new allegations he faces is about a payment he made from nissan to a businessman in oman but again he has been denying all the charges. let's go now to tesla, the electric carmakers saying it delivered almost one third fewer vehicles in the month of march compared to the previous quarter. it warns that
5:39 am 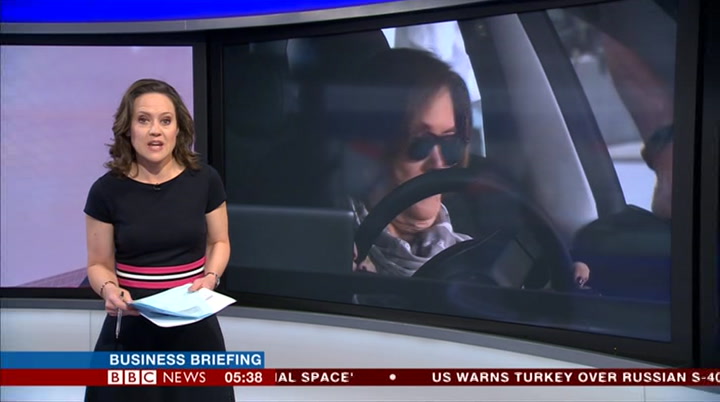 earnings will be hit either disappointing delivery numbers. i have been looking through some of these numbers and the sales, particularly of the model three, the delivery of the model free are of huge importance to investors because thatis huge importance to investors because that is the car they hope will bring tesla into the mainstream success. its success is quite important. looking at what they managed to achieve in the last quarter, between january and the end of march, only 63,000 cars were delivered by tesla to its customers. that was down 31% on the previous quarter. investors had inspected those deliveries to be down on the last quarter because of a variety of factors including new ta riffs a variety of factors including new tariffs being introduced, or credits, rather, being removed as an incentive. however investors had hoped that the impact would not be this big. they were hoping for
5:40 am 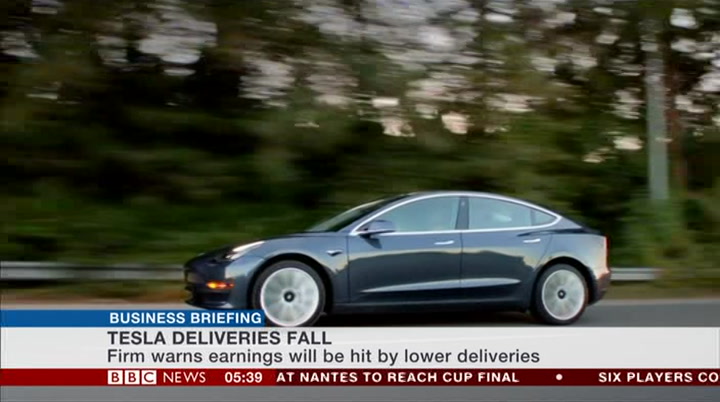 around 70,000 deliveries, tesla has managed only 63,000. the company blames that on teething problems caused by high demand and problems in europe and china. but it is a problem for them. they looked at the reaction of markets after hours and the stock of tesla has gone down a little bit which suggest investors are not too worried. if that has not gone up considerably by the next quarter, they could be in real trouble. and that was dave leave with the latest on tesla. —— dave leave. checking the markets now, a slow day for wall street where people are waiting for news from wall street where we have trade representatives from china and the us busy talking at the moment. hoping for a resolution to the ongoing trade dispute between the world ‘s two biggest economies.
5:41 am 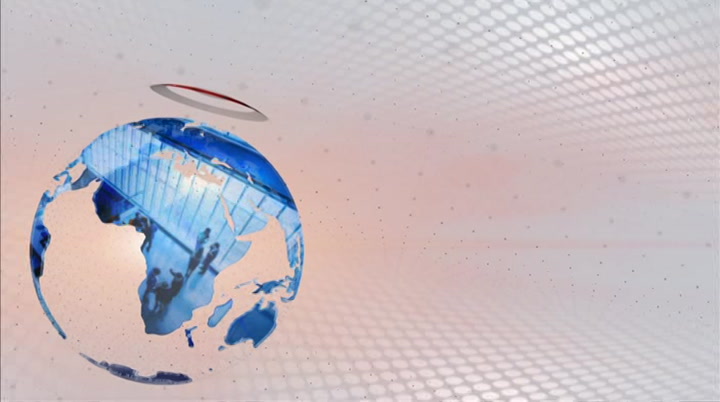 senior police officers have called for politicians and others with a public platform to use temperate language and not inflame the febrile atmosphere around brexit. police forces say as part their preparations for a no—deal brexit, they have more than 10,000 officers ready to be deployed anywhere in the country at 2a hour's notice if there's unrest. our home affairs correspondent daniel sandford reports. as the brexit debate has raged in parliament and around parliament and across the uk, passions have been inflamed. so much so that senior police officers are asking everyone
5:42 am 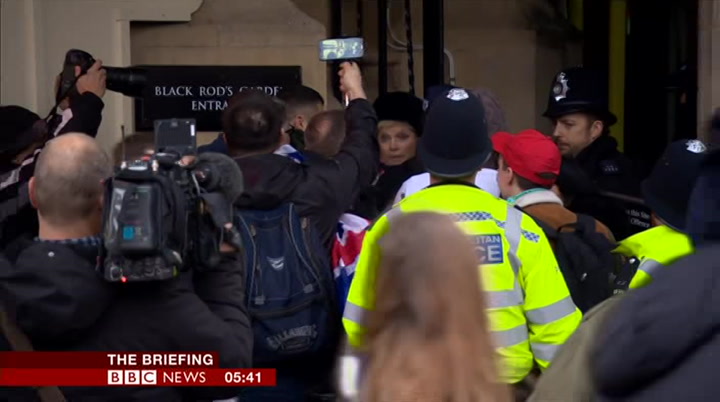 in what they call the febrile atmosphere to think carefully about how they express their views and to make sure their words do not incite others to violence. we would urge people to be measured and think about what you are saying and the impactand about what you are saying and the impact and what it might lead to before it is led. the confident in what you are saying that it is something you want to be heard and will not be misconstrued and acted uponin will not be misconstrued and acted upon ina will not be misconstrued and acted upon in a different way. with preparations well under way now for a possible no deal eu exit, chief co nsta bles a possible no deal eu exit, chief constables have been keen to stress that they are not expect major problems in any brexit scenario but they have been making contingency plans. to deploy thousands of officers within an hours notice and well over 10,000 within 2a hours stop they will be drawn from forces across england and wales and will be used to do with anything that arises, from problems on the roads to major protest and even writing. officers worn they have —— say they
5:43 am 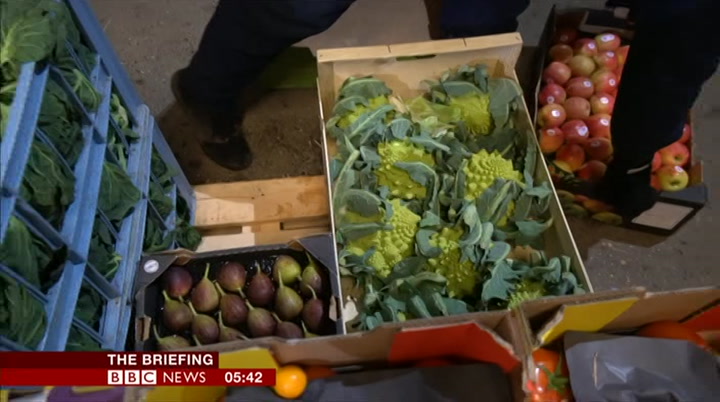 have worn those in charge of supply chains to make their own arrangements and to not rely on police forces who wish to stick to their core job police forces who wish to stick to their corejob of keeping community safe. for that story and more, breakfast is coming up at six . this is the briefing on bbc news. let's remind you of the headlines. dish mps have voted to force the prime minister to ask for an extension to the brexit process. in a bid to avoid leaving the eu without a deal. german chancellor angela merkel is due to meet the irish leader in dublin today as concerns over brexit intensify. so let's look at how the media is interpreting all of this. we begin with the mailonline which carries a warning from brexit minister robin walker that last night's votes by mps to kill off a no deal brexit could increase the risk of it
5:44 am 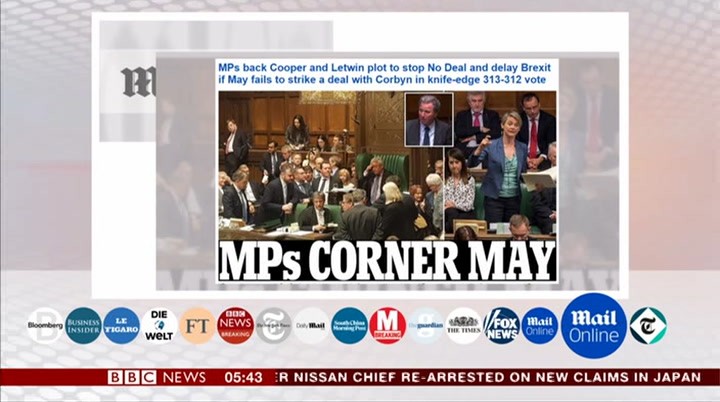 ‘accidentally‘ happening, because the new timetable does not allow enough time to sign it off. meanwhile the telegraph says uk pm theresa may appears to be moving towards opposition leaderjeremy corbyn's soft brexit demands as her top law officer claimed a customs union with the eu would not be "a sell—out". in the guardian, the international monetary fund has warned that the market power of a small number of global tech companies threatens to stifle innovation and greater competition is needed. the mirror focuses on recent comments made by prince harry who has warned how social media is "more addictive than alcohol and drugs." his remarks were made only 2a hours after launching his own record breaking instagram page. the daily mail leads with an alarming headline claiming nearly one—in—six deaths are now linked to unhealthy eating in the uk, which is similar
5:45 am 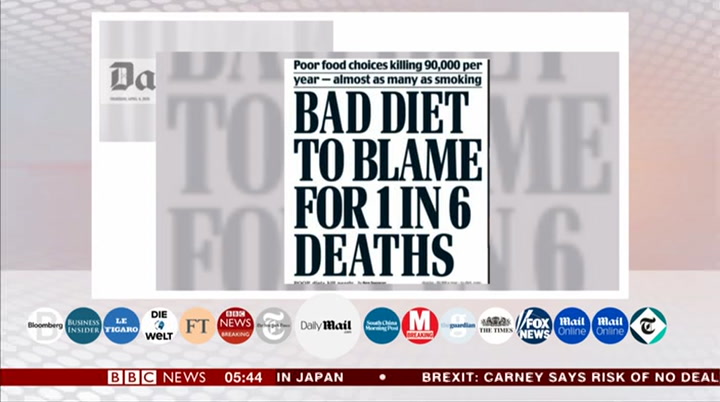 to the cost in lives resulting from smoking related diseases. and finally on the bbc website, dame helen mirren has criticised netflix as the debate over cinema and streaming services continues. the british actor, whose film roles include the queen and gosford park, was attending a cinema conference in las vegas when she used expletives to criticise netflix, and then saying "there's nothing like sitting in a cinema." you are saying it depends who is around you. we have eileen burridge here with us, good to see you. let's start with the mail online. this story broke at 11pm last night, it did not make the print press but it is being widely discussed in social media. this is the warning from one particular mp who
left
right
email Borrow Program
tv

The latest economic and financial news, market updates and interviews with the key news-makers in the business world.