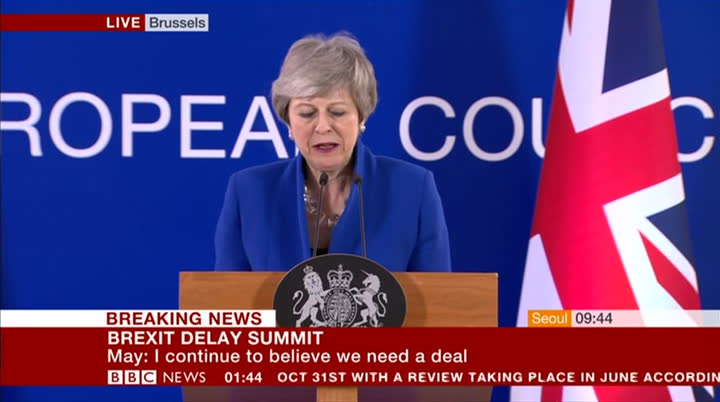 welcome to bbc news, broadcasting to viewers in north america request of ratified which was my key request of my fellow leaders. for example, this and around the globe. means that if we are able to pass a my name is mike embley. deal in the first three weeks of our top stories: donald tusk confirms there will be may, we will not have to take part another delay to brexit until the end of october — in european elections and will but there's still widespread officially leave the eu on saturday frustration. the first of june. officially leave the eu on saturday the first ofjune. during the course of the extension the european council is clear that the uk will continue to hold full mentorship rates as well as its obligations. as please do not waste this time. isaid in rates as well as its obligations. as i said in the room tonight, there is only a single tear of eu membership the british pm remains defiant, but has she done enough to calm her critics back home? with no conditionality attached beyond existing treaty obligations. let me conclude by saying this, i know that there is huge frustration from many people at that i had to we have a duty as politicians to request this extension. the uk should have left the eu by now and i fill the democratic decision of the referendum. deliver brexit and move sincerely regret the fact that i our country forward. nothing is more have not yet been able to persuade pressing on more vital. parliaments to approve a deal which would allow the uk to leave in a smooth and orderly way. but the choices we now face are stark and the timetable is clear. so we must i'iow press on the timetable is clear. so we must now press on and the timetable is clear. so we must i'iow press on and a
1:46 am 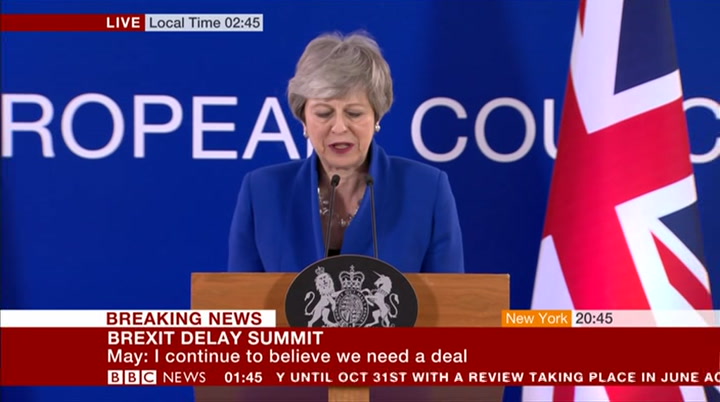 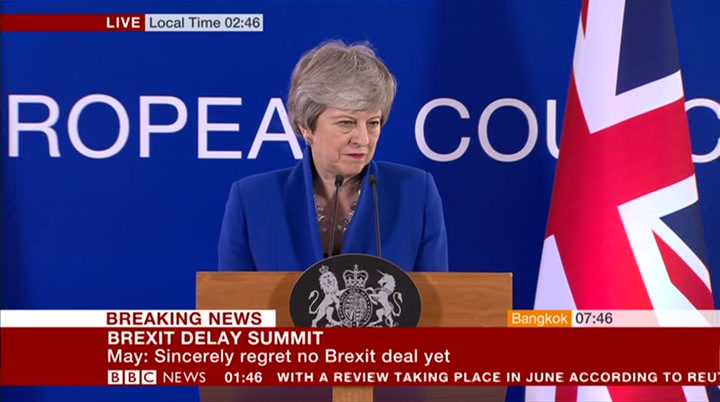 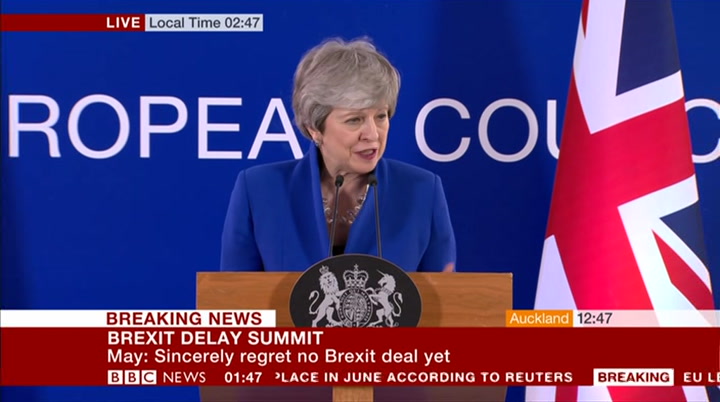 conservative party in government, we deliver on the result of the referendum, deliver brexit for the people of the united kingdom. what this extension enables us to do is to go through the process that we have set up, to enable parliament to come to a majority opinion on the way forward so that we can get that deal ratified and delete the european union and i want to do that as soon as possible. if we are able to do that before the 22nd of may, then we will not have to hold those parliament reelections. anything else, jason? report—macro: —— reporter macro... -- reporter: premise, you promised that we could leave in april. they said we might be for halloween. —— prime minister, you promised for sub don't feel you of the country and apology? over the la st of the country and apology? over the last three months, i have voted three times to leave the european union. if sufficient rivers of parliament had voted with me in january, we would already be out of
1:49 am 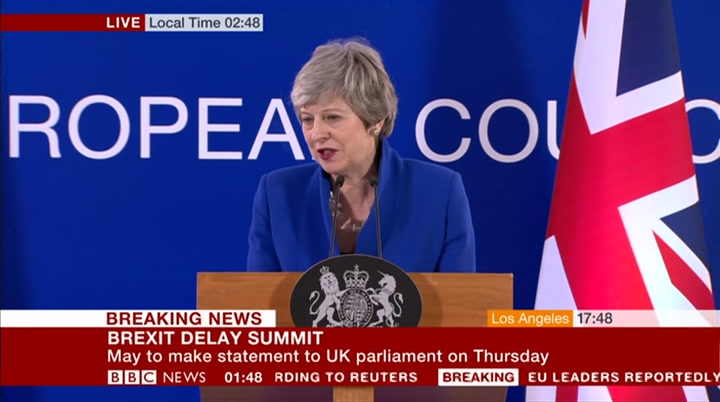 the european union. we have not been able to get that majority in parliament. as you know, i have now been reaching out to find a way in which we can get an agreement that will command a majority across the house of commons to ensure that we can put the legislation through, we can put the legislation through, we can ratify the withdrawal agreement, have the withdrawal agreement bill through the house of commons and the house of lords so that we can ratified this agreement and be the european union. i want to do that as soon as possible. that's what i will continue to work for. george. reporter: george parkerfrom the financial times. a very quick question. can the deadline of october 31 be extended again? i think donald tusk said it could be. and you said there is only a single tear of eu mentorship. what were the kind of conditions at the other member states wanted to attach our continued membership? as you will have seen from the decision that is come out of the council tonight it
1:50 am 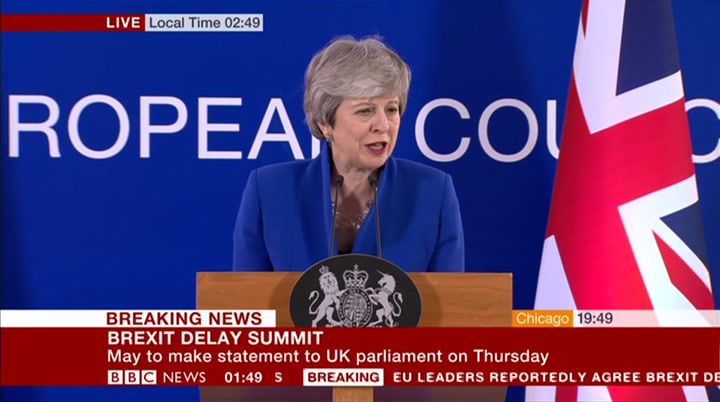 is very clear that we will continue to abide by our obligations and as i wrote to my letter to donald tusk la st wrote to my letter to donald tusk last week, we will continue to abide by our duty is sincere cooperation as members of the european union. the council and the agreement that we have come to tonight is for that extension to the 31st of october as i say, i am clear that we should all be working now in the uk to make sure we can find a way forward in parliaments, get a majority in parliament, ratified the withdrawal agreement, and make sure we leave as soon as possible. paul. reporter: . first relieving on the 21st of march, the 22nd of may, are your party back i'm going to consider this a trick or treat? what i say is we could've left on the 29th of march and be out of the european union now. if parliament had agreed with the matured and permit to agree that withdrawal agreement. i had
1:51 am 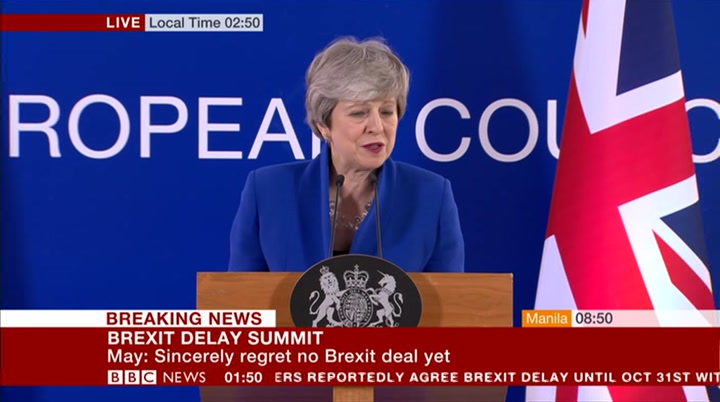 hoped that apartments would have agreed to ratify the withdrawal agreement so that we could have left oi'i agreement so that we could have left on the 22nd of may. if we can now find an agreement implement and put the legislation through in time we could still leave on the 22nd of may and not hold those european punditry elections. what we must all be working for is to find a way we can get the majority in parliament so we can leave the european union, deliver on the referendum, and do it as soon as possible. pippa? reporter: yes, i was looking. donald yes, iwas looking. donald tusk yes, i was looking. donald tusk was suggesting that we could keep on coming back and asked for sentience. what can you give the british people and your own party that breaths it will actually happen? i'm very clear that we must deliver as a government oi'i that we must deliver as a government on brexit. the parliaments gave the choice to people in the referendum. the government said that we would abide by the decision the british people talk. it is now our duty to deliver on that decision. we could
1:52 am 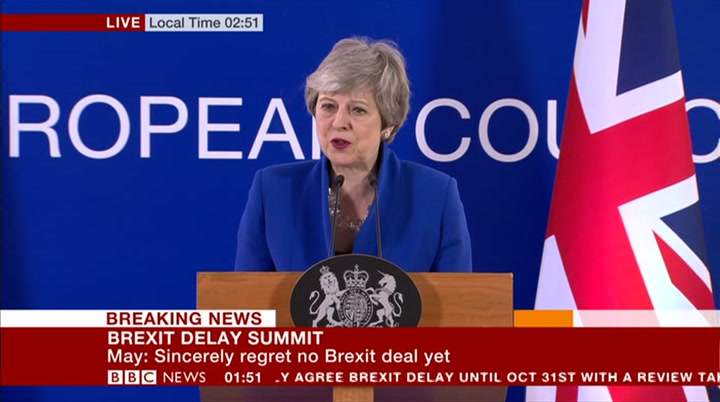 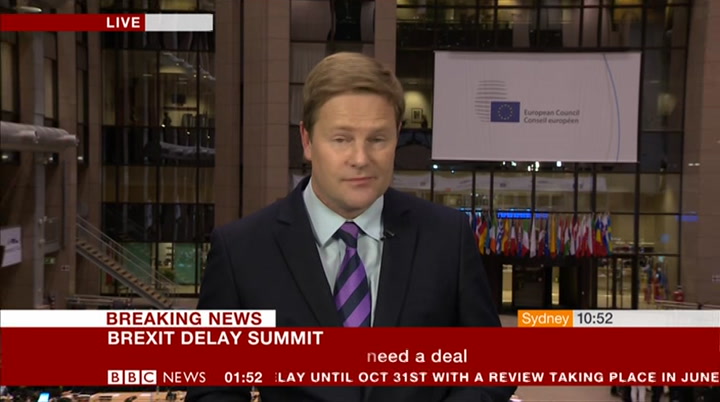 would be huge frustration among certainly her backbenchers, that this is not going to go on until october, there is that flexibility within the extension, the guillotine because that if the deal is ratified and passed, then the uk could weave on the first day of the following month. was caulked —— talk to chris morris now, our correspondent. what do you take out of what she was saying there? we fight on, we fight for another day. that question about weaving and time to go, she said that this buys us more time if we can geta that this buys us more time if we can get a deal done before the 22nd of may, we don't have european elections and leave. so if you like she still has that window. i think the rest of the eu are already looking beyond that and thinking that there is a six—month extension period. "let's see what happens throughout that". there is an idea
1:54 am 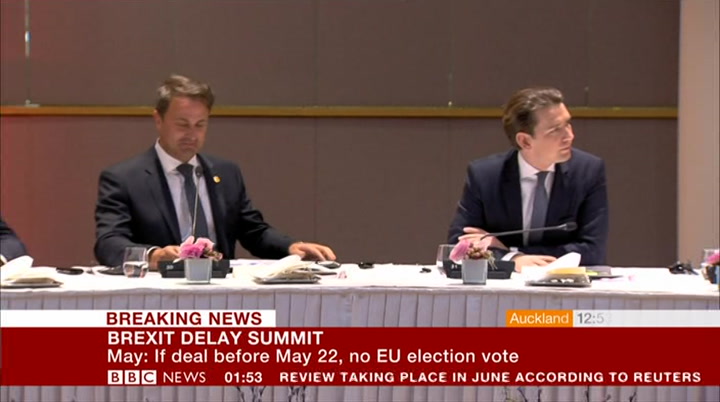 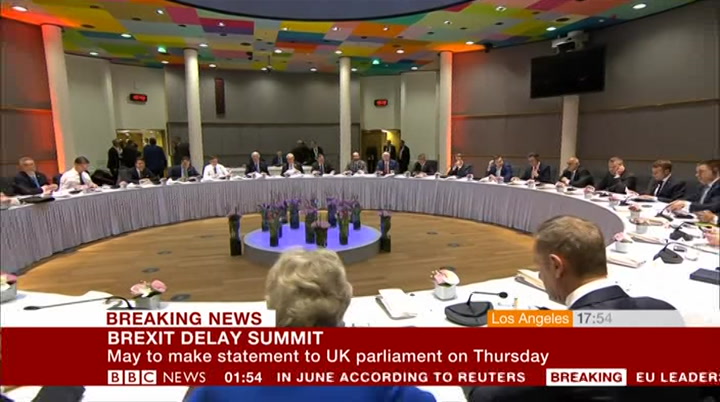 in what has been agreed today that says october the 31st is the final deadline? and he said "no, there isn't". another scenario is possible because article 50, the bit of the lisbon treaty that sets on how you negotiate, says nothing about the fa ct negotiate, says nothing about the fact that you can extend and extend and extend. there are bound to be questions, could we get to late septemberand questions, could we get to late september and early october? we will be in the same position we are now. still deadlocked and no agreement in the united kingdom for some frustration in the rest of europe and a decision that has to be taken. chris morris from our reality check tv. -- chris morris from our reality check tv. —— thank you very much for that the one thing to take is that the uk will not be leaving the european union in two days' time. the cliff edge has been avoided, kicked down the road again towards october 31. the uk will be retaining all its membership rights, it may well be taking part in the european parliamentary elections and may even be taking decisions on the next
1:56 am 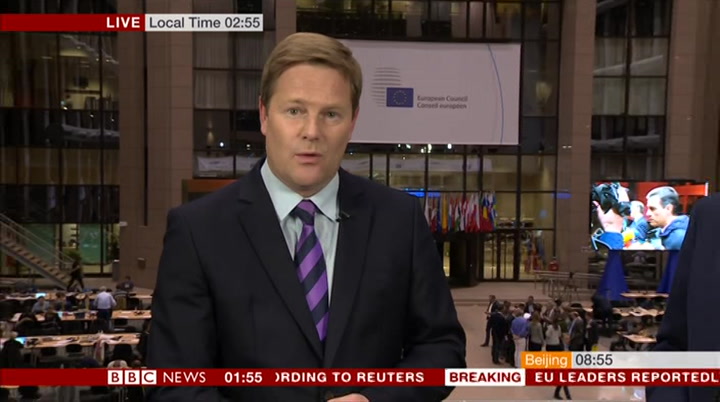 european commissioners. all those things will remain in place while the uk remains a member of the european union. you are watching bbc news. no sign of spring warrants in the immediate forecast. it is looking colder. we will look at that and just a moment. first of all how thursday is shaping up and talking about cold weather, a widespread frost to begin the day but a fine day ahead for most places with some sunny spells. high pressure in control at the moment that is blocking with assistance from coming oui’ blocking with assistance from coming our way from the atlantic. also block them out there air from coming oui’ block them out there air from coming our way as well because the high pressure will bring in this chilly breeze from the east and h of the air with blue showing up as thursday begins. a widespread frost away from northern scotland and along with the north sea coast. the breeze and cloud will hold temperatures just above freezing. but there will be a good deal of sunshine in that they
1:57 am 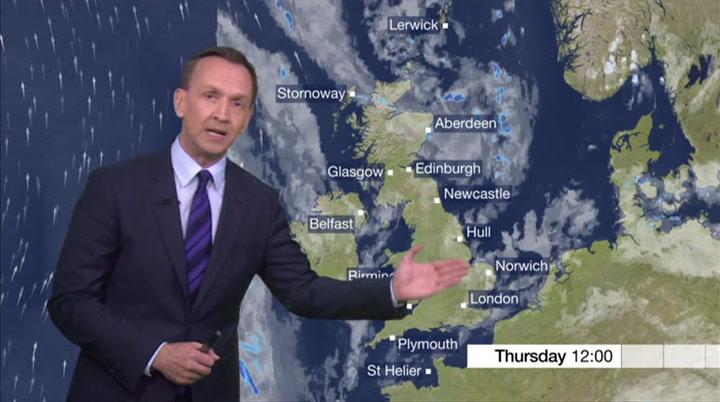 have had but for some of us perhaps not as much as we had on wednesday. parts of eastern england will see a bit more caught around. the week where the front close to scotland, cloud, patchy rain and the odd have your shower could be possible. plenty of cloud moving into northern ireland. it's the easterly breeze and most of us it is light and it will pick up over the weekend but not much going... this is where we are adjusting to single figures. elsewhere in the range of ten and 12 degrees and if we get some sunshine it still will not feel too bad at this time of year. as a go through the night into friday morning, some areas of cloud around and clear spells but the clear weather isn't as widespread so the frost is not as widespread heading into friday morning. just pockets especially in parts of scotland and northeast england. temperatures higher as friday begins. and then on friday there will be more cloud around generally whilst most places will be staying dry, parts of scotland maybe toward the north—east will see a
1:58 am 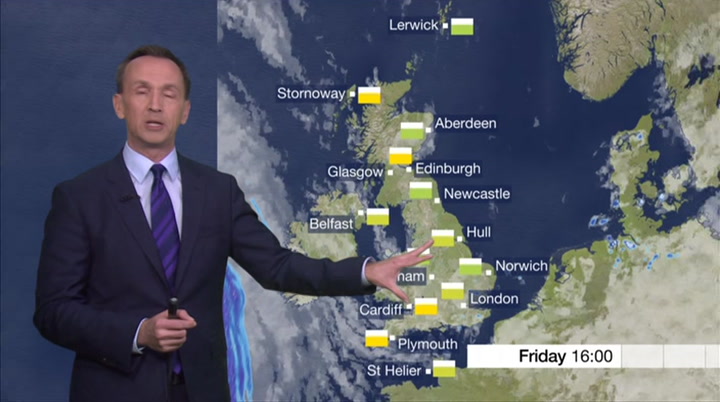 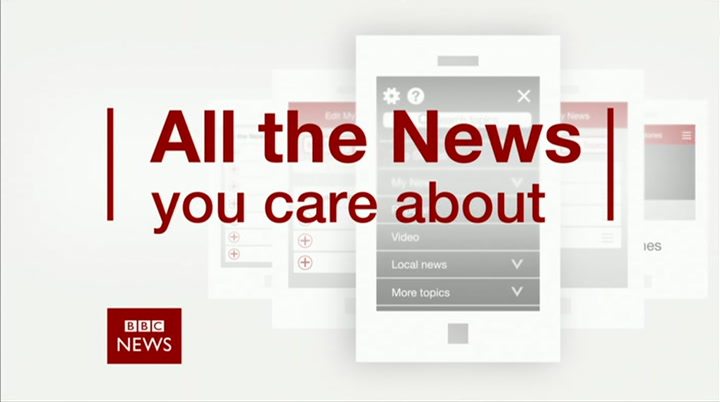 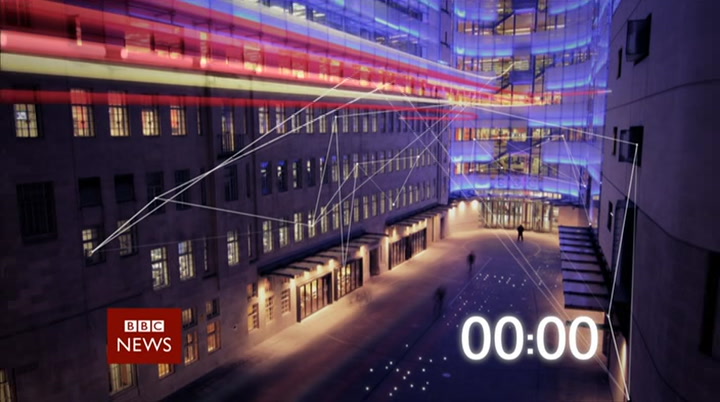