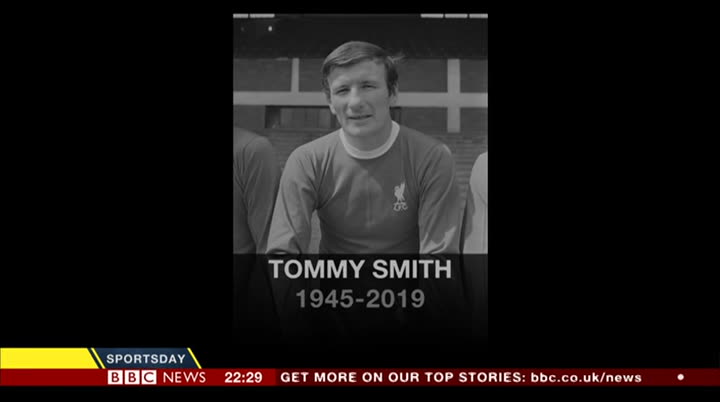 the liverpool managerjurgen klopp has called for life bans for fans found guilty of racist abuse. it follows the emergence of a video where six chelsea supporters appeared to chant an islamophobic song on their way to the club's europa league match at slavia prague last night. three of the six people involved were identified by chelsea and barred from the game. these guys... it's not always, it happens in other parts of life as well, but these guys are football fans so if you do something like that, you should not be allowed to enter a stadium again, from my point of view, in your life. arsenal, meanwhile, have started an investigation after a video emerged online where a supporter can be heard allegedly racially abusing the napoli defender kalidou koulibaly during their europa league quarter final last night.
10:31 pm 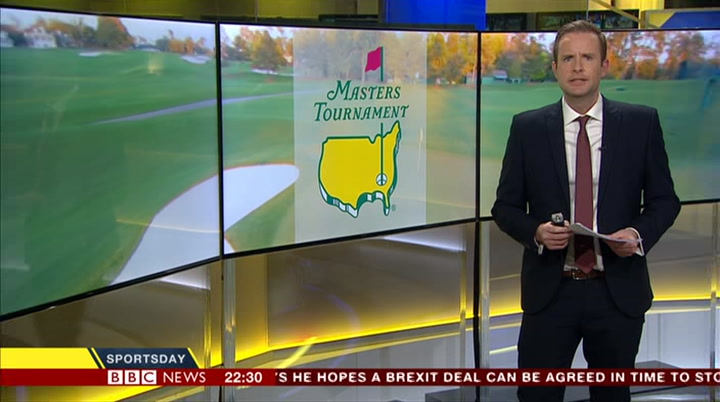 lets head to augusta then, where the second round of the masters has been suspended because of the threat of lightneing. there is a three way tie at the top of the leaderboard. ian poulter is the leading brit, he went round in one under today, leaving him two shots of the lead which is shared by brooks koepka, jason day and last years open winner francesco molinari. all those three are in the clubhouse on seven under par. tiger woods though, remains in contention. he is just a few shots behind on 3 under. let's get the latest from bbc sport's eilidh barbour whojoins us live from georgia. yes, hello. you might be able to see some pretty dark clouds behind me we've had a very interesting day's play, but the players were taken off the court and they are all screaming out because there is a suspected
10:32 pm 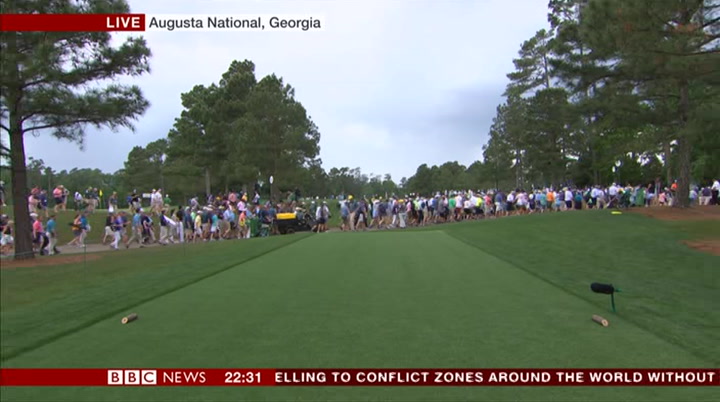 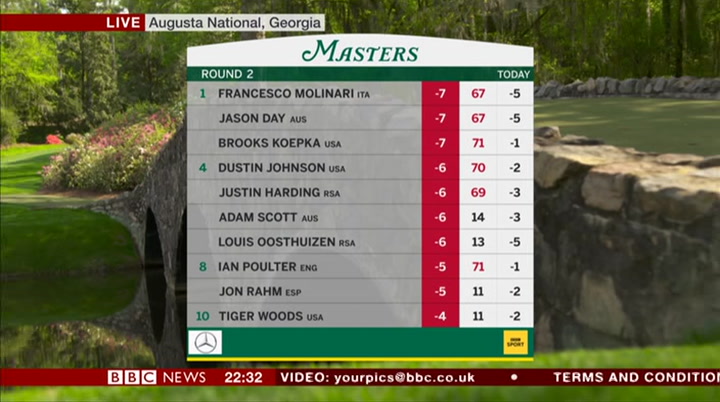 ian poulter put together another solid round, the projected cut is currently three over par which does meanjustin currently three over par which does mean justin want to currently three over par which does meanjustin want to be here for the weekend as things stand. we do expect play to resume around 50 minutes of the storm moving on as expected, it may be a struggle to get every player in today. tiger woods is currently one under par, amongst those and the last group, we do have highlights off today and on saturday, quarter past one the afternoon i bbc one from nine o'clock in the morning on iplayer and then we will be live and uninterrupted tomorrow evening on half past seven. you canjoin uninterrupted tomorrow evening on half past seven. you can join us then. leicister tigers have boosted their hopes of staving off relegation in rugby union's premiership with a thrilling 27 — 22 win at newcastle. defeat leaves the falcons bottom of the premiership with three games remaining. jonny may's early try helped put the tigers 13—nil up. but quickfire scores from chris harris and tane takulua
10:34 pm 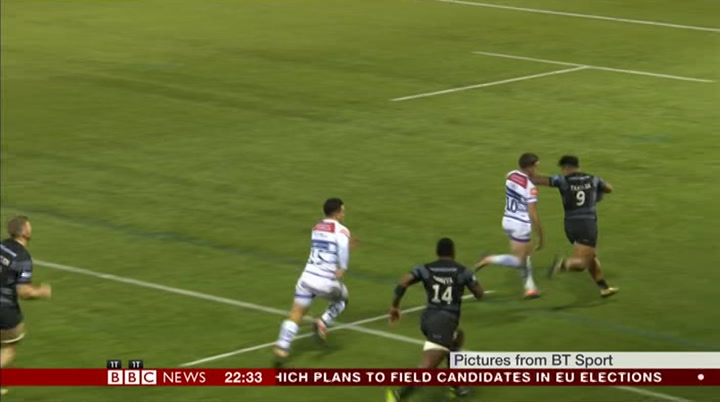 cut falcons‘ half—time deficit tojust one point. the winning try though coming from guy thompson. that win lifting them up to ninth, eight points above newcastle. there were three games this evening in the pro 1a. ulster secured a play—off spot and dealt edinburgh's end—of—season aspirations a huge blow with a bonus—point win at murrayfield. robert balacoon amongst the try scorers there. the defeat means edinburgh must beat rivals glasgow at scotstoun in a fortnights time — and hope benetton lose — to clinch the final play—off spot. elsewhere ospreys ran in seven tries as they beat southern kings by 43 points to seven in port elizabeth. dan evans‘ hat—trick keeping the welsh side's title play—off bid alive by climbing above cardiff blues in the conference a table. now... the rfu say they will meet england international billy vunipola, after he appeared to show support for australia's
10:35 pm

israel folau today... earlier this week folau suggested "hell awaits gay people" on social media, which has led to him facing the sack. our rugby union correspondent chrisjones reports now on vunipola's own social media post earlier today, in which the saracens forward called for people to "live their lives how god intended" it's a really big topic, and really opened up a can of worms because there will be those who say that the likes of him are entitled to their religious views and of course eve ryo ne religious views and of course everyone is entitled to his or her views, but the issue we have here is that a player like folau is using their platform to spread belief that many people will find offensive and harmful. that is the big issue here. it is not a case of they can't practise their christianity, but
10:36 pm 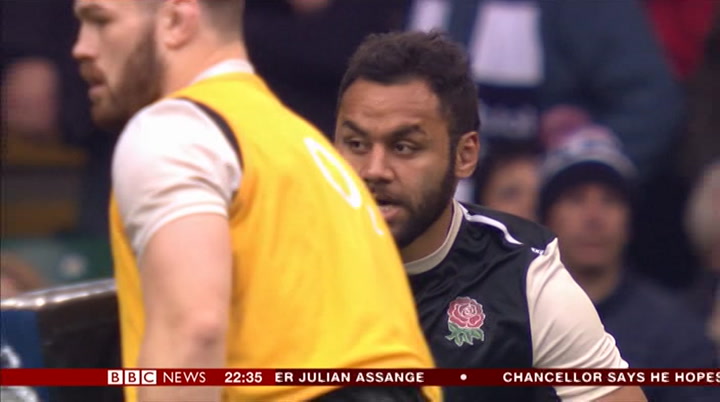 should they be using the social media platforms to spread a form of belief or interpretation of their religion, that is clearly offensive to some people and that is the big topic here and that is why it has caused such a storm and services is investigating it. no indications at this moment that vunipola is going to get the same treatment but if need be, he could be charged by saracens for bringing the game into disrepute. but it very noticeable how both club and the union have acted pretty quickly to condemn what vunipola had to say and will act further. st helens have gone back to the top of superleague tonight after a 38—12 victory over warrington. the wolves had begun the evening ahead of saints on points difference but six trys from 6 different scorers did the damage for saints. mark percival and winger regan grace amongst the scorers.
10:37 pm

in the nights other match, wakefield continued their good form as they beat wigan warriors 30 points to 20. the challenge cup is also back underway this weekend. two games tonight, and two big wins for the superleague sides. leeds beating workington town by 78 points to 6. whilst salford beat rochdale hornets 76 poitns to 6. rochdale hornets 76 points to 6. ellie downie has just missed out on another european all round gymnastics title in poland. she has though taken silver. downie led going into the floor routine, but was eventually pipped in the final discipline by france's melanie dejesus dos santos, who snatched gold. angelina melnikova of russia was third. afterwards downie wasn't disheartened by her second place i'm actually ecstatic! coming in yesterday, i honestly didn't think i
10:38 pm 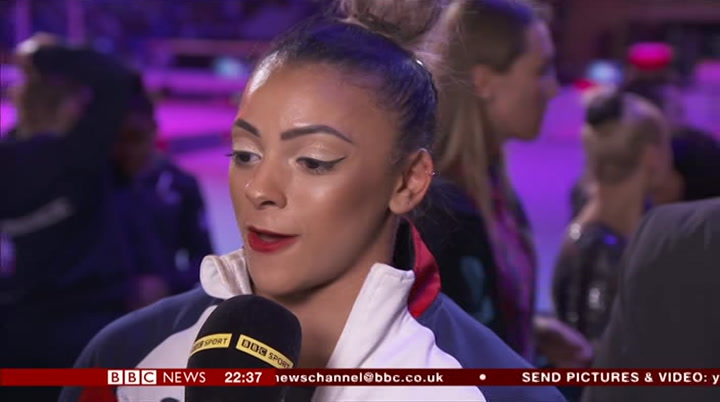 as you want to, and that's motivation for me, i see it. i get more motivation for my family and friends, the team that put so much effort into me, people who want to come out and support me. the already three—weight world champion lomachenko made his debut in 2013 after a massive 397 amateur fights. he's already a world champion of course, with just 12 wins from 13 bouts — including 9 knockouts. crolla is the more seasoned professional coming into this fight — he'll need to draw on all of the experience from his 43 fights and 285 rounds in the ring. that's all from sportsday. we'll have more sport throughout the weekend.
10:40 pm 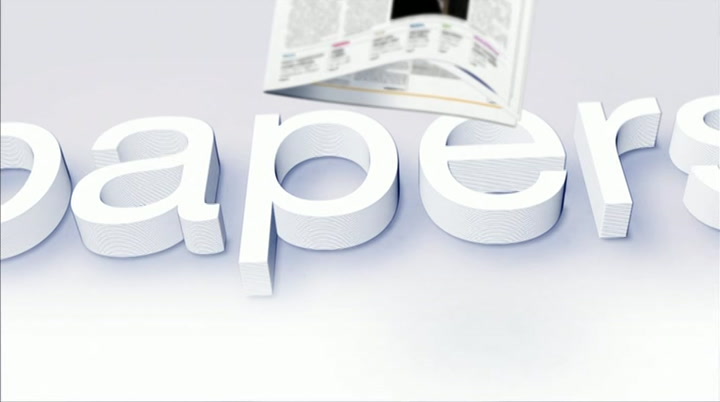 hello. this is bbc news. we'll be taking a look at tomorrow mornings papers in a moment — first the headlines. hello and welcome to our look ahead to what the the papers will be bringing us tomorrow. with me arejoe twyman, director at the opinion poll deltapoll and benedicte paviot the president of the foreign press association and uk correspondent for france 24. many of tomorrow's front pages are already in. headline, facing a tug—of—war between the united states and sweden. swedish prosecutors are considering reopening a rape investigation into the wikileaks co—founder while the us wants to extradite him for leaked government secrets according to the guardian, political pressure is intensifying on sajid javid to allowjulian assange, and it could
left
right
email Borrow Program
tv