Search the history of over 424 billion web pages on the Internet. 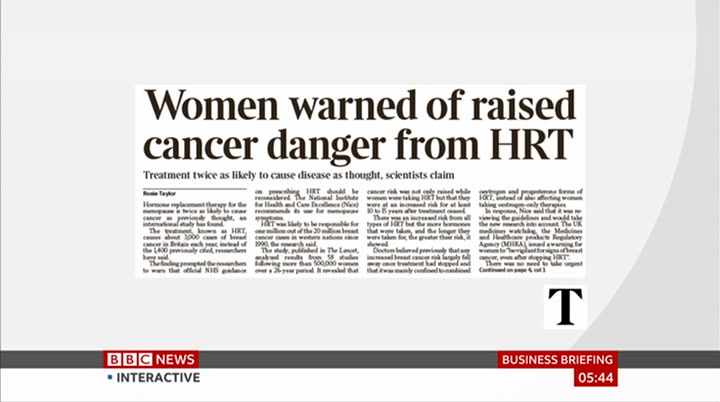 those winds generally lighter further south and east, thanks to that area of high pressure. but the air still on the cool side moving on to the times new but perhaps a little below average. and a story that's in several again, the low to mid team of today's papers: celsius in the north. the hormone replacement therapy for the menopause, or ‘menopausal hormone therapy‘ as it's known, is twice as likely to cause cancer than previously thought. online tech publication, techradar, is looking at the ongoing dispute between the us and china. google says because of the us government ban on sales it cannot licence its apps to the chinese phone company. that means huawei customers will be left without access to some of the world's most popular apps. and finally onto the ft, and news that formula one world champion, lewis hamilton, is investing in ‘neat burger‘ the first plant—based sustainable burger chain of its kind. working with teams of chefs from beyond meat the new restaurant will open in london on monday and will be serving up 3 core burgers — all meat—free — and water and soya—based milkshakes to drink!
5:46 am 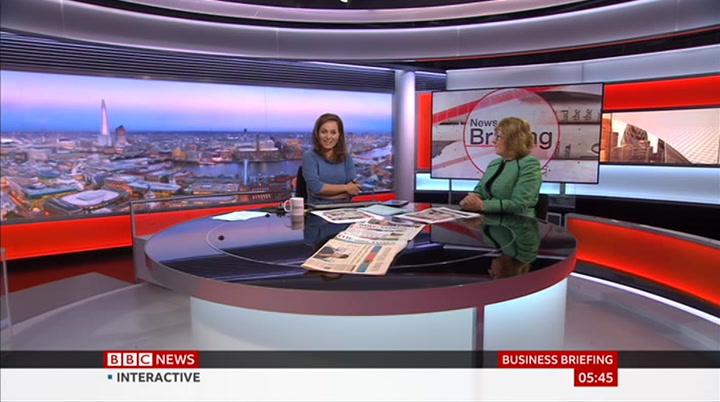 wright did you know that lewis hamilton was a vegan? —— did you know that lewis hamilton was a vegan? so let's begin. with me is fiona reynolds, chief executive officer of pri — principles for responsible investment. let's look at what is going on in british politics. the i is leading with the three main points. johnson heading for the defeat in the commons next week. opposition parties coalescing around this idea. they want to avoid an ideal outcome if they can and get in there before such time it is too late. ruth davidson in a picture sending a parting shot to number ten as she stands down. jeremy corbyn saying mps can block the suspension of parliament. where do you stand on all of this? do you think that the words of some of the politicians who said they were outraged this week will turn into deeds in terms of
5:47 am 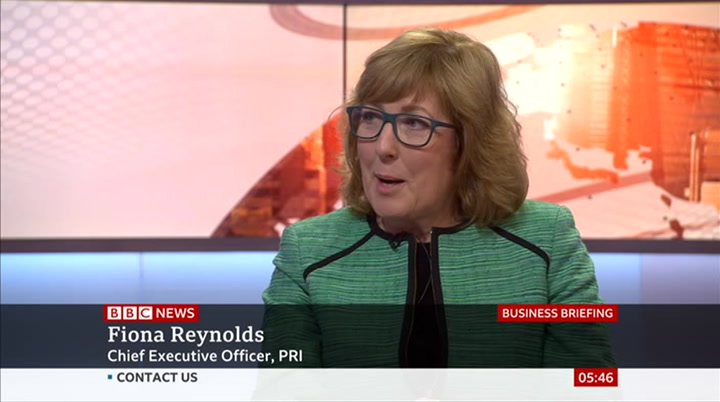 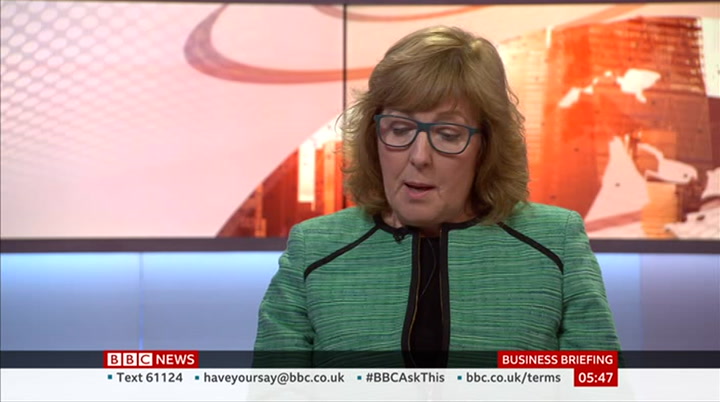 no deal will drop the biggest investment since the financial crisis. many economists are saying we are heading for a recession. i think that it is time for parliament good morning. welcome to breakfast to come together and resolve this with steph mcgovern and jon kay. our headlines today: for the good of the country. surely intensifying talks with the eu — the government promises negotiations with the eu twice a week from now they should have been doing this on in the hope of securing a brexit deal. the risk of breast cancer when taking hrt during the menopause three years ago? absolutely and it can last years longer than previously thought, has been going on and on. no—one is saying they will be any good coming out of a no—deal brexit. saying they will be any good coming out of a no-deal brexit. exiting the eu without a deal. some people would turn around and say that is some certainty because at least we are out. it is a certainty we are out but not certainty about the rules. it is not certainty the business about how we're going to operate and
5:49 am 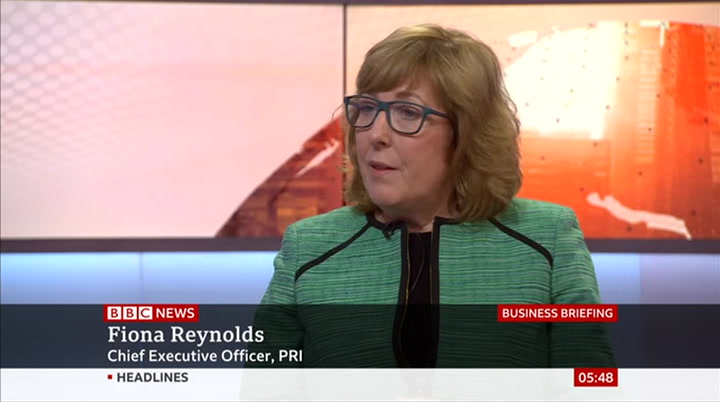 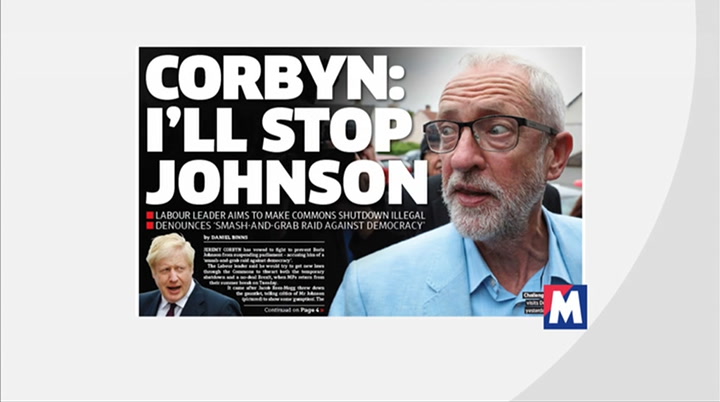 leader of their party or are they going to support the opposition? i think we will have to see what happens on tuesday. it will be interesting to see what happens this morning with the court case in scotla nd morning with the court case in scotland and the legal challenges that are there as well. let's talk about the story in quite a few of the papers today but certainly the front page of the times. women warned of raised cancer dangerfrom hrt,by warned of raised cancer dangerfrom hrt, by mitch me mean ——by which we mean, hormone replacement therapy. the cancer risk is twice as high as previously thought. this is this international study that has come out from university of oxford. did we know this sort of thing i did we not really know the quantity? has this changed the debate in any way? people know the risks but did they
5:51 am 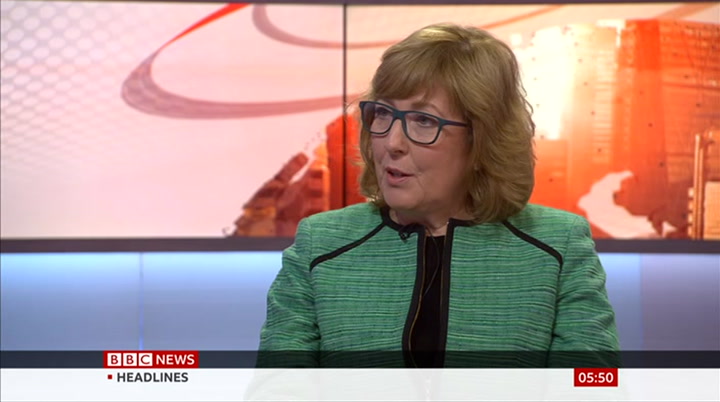 know how bad ? people know the risks but did they know how bad? i think it is really confusing and this story adds to the confusion because first of all, women were encouraged to take hrt and then there was the link to breast cancer and most doctors were then saying ok, don't take hrt. then there was a study done, actually, there was a study done, actually, the link was very small and it all had to be monitored. now reading things like this, we will be back into the situation where women are not sure, really, whether this is the right therapy that they should be taking. i really hope there is some more clarification that comes out about this because what we are reading now, as you say, is that you are double the risk of breast cancer. and for longer as well. that
5:52 am 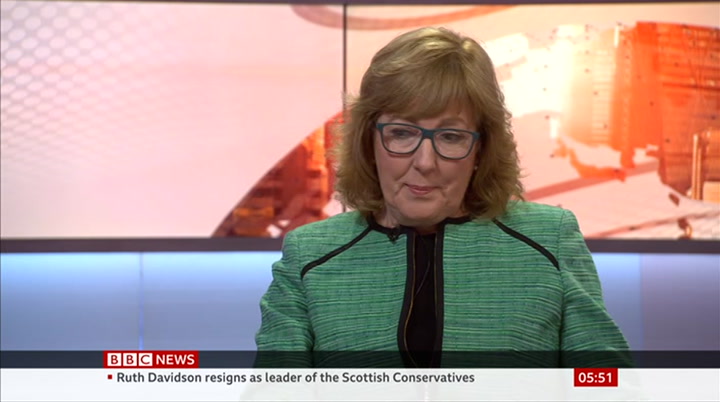 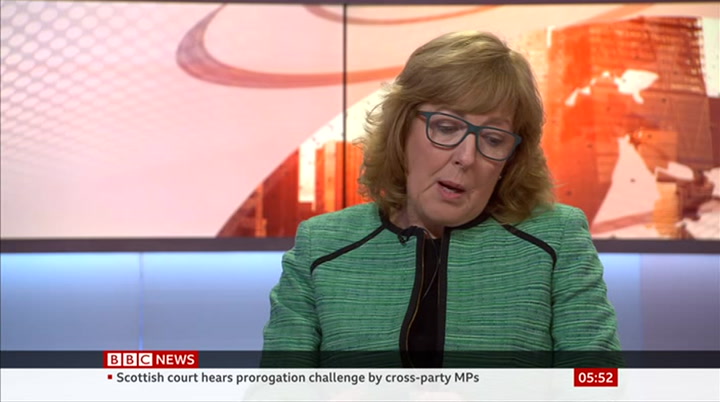 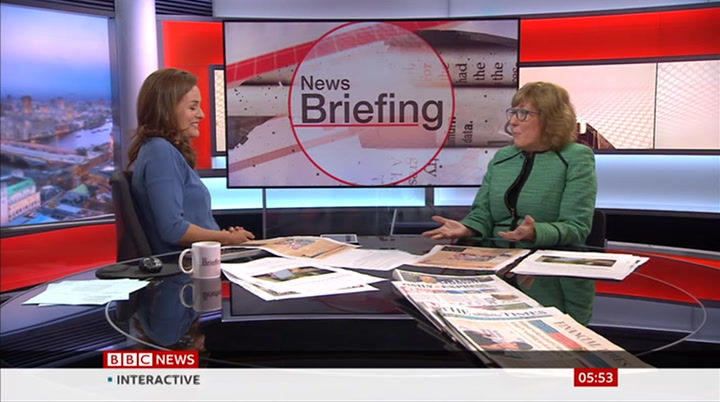 won't meet like products. i have had beyond meat products. did you enjoy it? i personally couldn't tell the difference. i was quite happy with my vegan hamburger and vegan sausages. i think most people were. i think this is great because we need viable alternatives if we are going to eat less meat. you mentioned beyond meat being this us company that floated in may to a real unbelievable share price was not it came in from $25 and launched at 164 so a real growth story for top length very much, really interesting to speak to you about all of these stories. stay with us on bbc news, a lot more is coming.
5:55 am 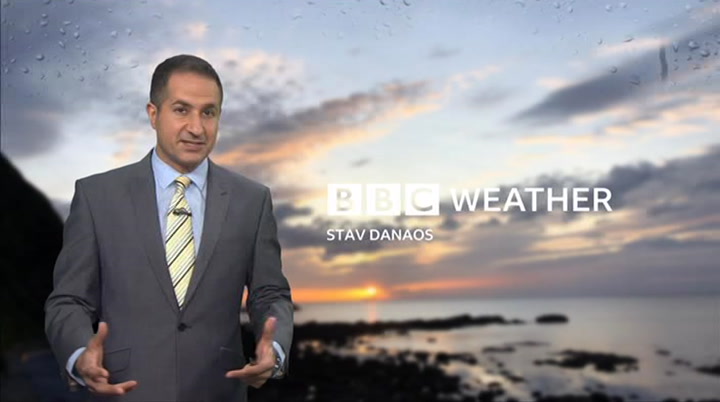 hi there. we saw temperatures reach 25 degrees in the south—east of england on thursday. there was plenty of sunshine across the south and east of the country, closer to this area of high pressure. but into friday, again, low pressure dominates the north and the west, where it will remain pretty windy and there will be further outbreaks of rain and, as a result, it will feel a bit cooler than it will across the south and the east. so outbreaks of rain on—and—off for scotland, northern ireland, into north—west england, perhaps the far north—west of wales, where it will be pretty windy — gusts of 30—40mph. but again, across the south—east, close to that area of high pressure, another fine afternoon with sunny spells, probably around 25 degrees or so. mid to high teens further north. now, it stays very wet through friday night across scotland, northern ireland. this weather front is not going anywhere fast. further south and east, overnight, it should actually be generally dry with clear spells, variable cloud, fairly breezy too, so that will stop temperatures from falling much below 11—14 degrees. so as we had on into saturday, it starts off very wet across northern and western areas, but this whether front will pivot round, moves across the rest of england and wales
5:56 am 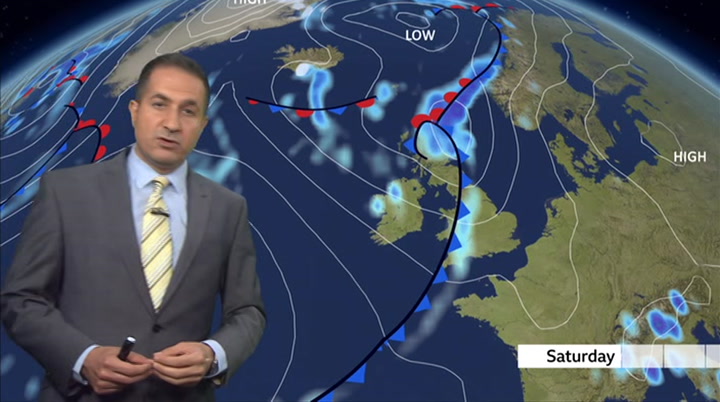 through saturday into saturday night, but it will be a dying feature as it reaches eastern areas. so a lot of rain falling across parts of northern ireland, south—west scotland. by the time saturday's out, we could see some minor flooding in places. but as that weather front clears through, skies will brighten up behind it, with sunshine and showers, but it will be notably cooler here but, again, the last of the warm days across the south—east until that weather front arrives. but that weather front will move through during saturday night, and it will open the floodgates to a much cooler north—westerly, this is polar maritime air — remember sunday is the first day of the meteorological autumn and it will certainly feel pretty autumnal out there. it will start off chilly. there will be plenty of sunshine around and then lots of showers will spread down from the north—west. some of these could be heavy and thundery and it will feel quite chilly when the showers turn up, with temperatures into the low to mid teens celsius for many. the high tweens, perhaps 20 or 21, across the south—east. as we head on into monday, it looks like high—pressure still wants to build in from the south—west. it will still have further fronts affecting scotland and northern ireland.
5:57 am 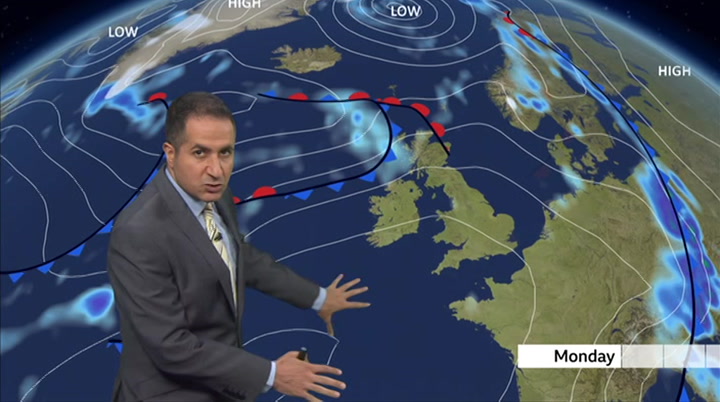 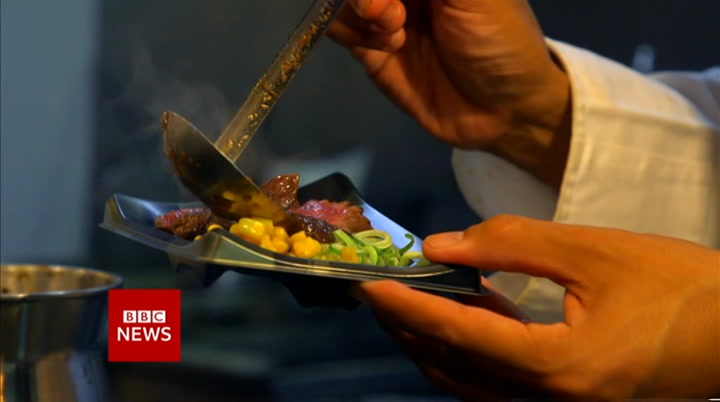 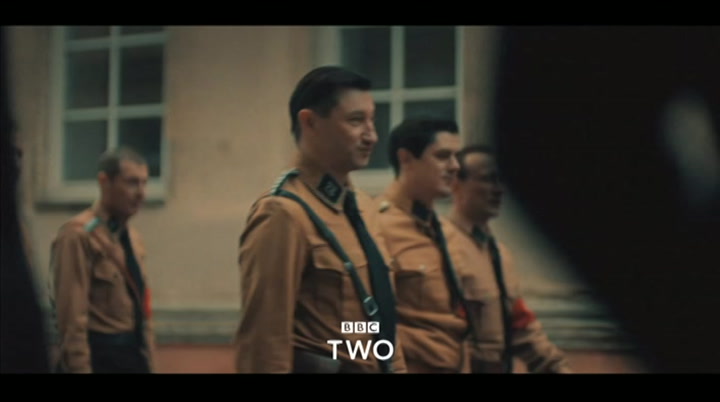 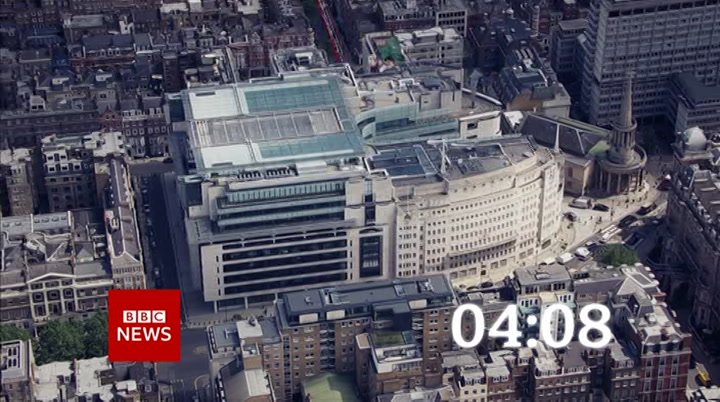