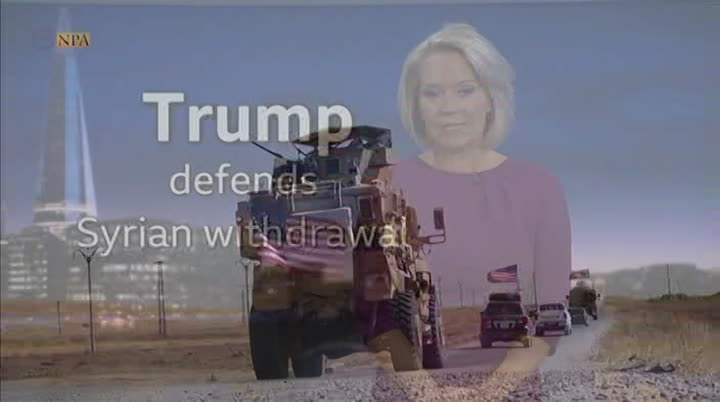 president trump defends his decision to pull us troops out of northern syria. the move would leave the road open for turkey to launch its long—threatened attack on kurdish forces, who are allied to america, but regarded by the turkish government as terrorists. hundreds of climate activists from the extinction rebellion movement are arrested in cities around the world at the start of a two—week campaign to demand government action on limiting global warming. and this story is getting a lot of attention on bbc.com israeli archaeologists unveil the ruins of a 5,0000—year—old city in the centre of the country. they say it is one of the largest in the region for that period, and was home to around 6,000 people. that's all. stay with bbc world news. and don't forget there's more
1:31 am 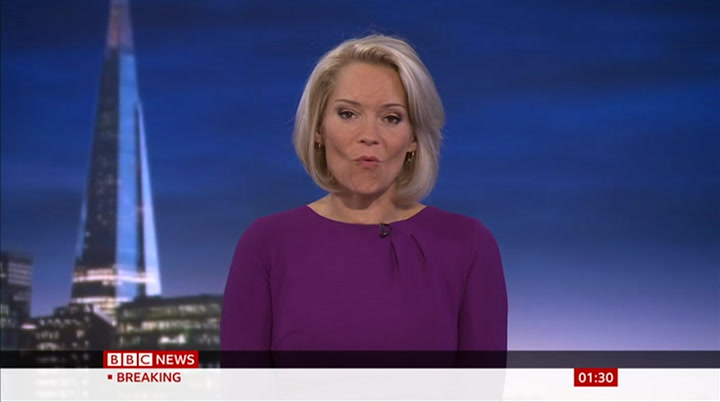 on all our stories on our website. it is all there. and you can get in touch with me by social media. now on bbc news live to singapore for asia business report. us blacklist revisions. more than two d oze n us blacklist revisions. more than two dozen chinese companies are added. the nba is bringing basketball to india but is it the cricket obsessed nation ready to welcome another spot? good morning, asia, hello, world. glad you could join us this tuesday.
1:32 am 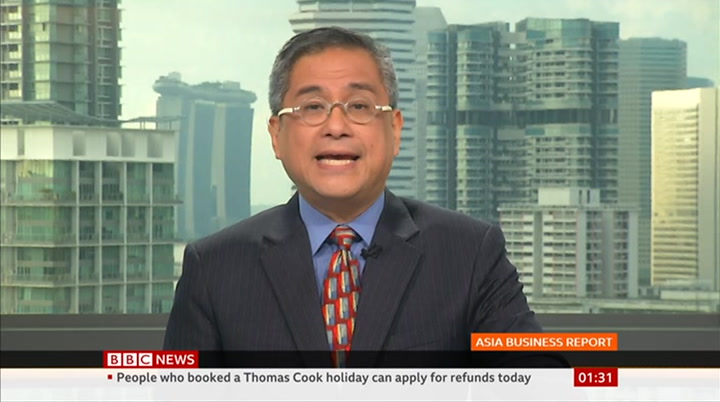 the world's two superpowers will be meeting in washington on thursday is the latest rows of trade negotiations kicks off but these togs come against the backdrop of the american decision to place 28 chinese entities effectively banning them to using ending us technology. according to the commerce department, they are acting contrary to american foreign policy interests. what is this ban all about? it happen in the late hours of monday. the us commerce department announced it was placing 28 chinese entities on an entity list which effectively they cannot buy american technology without the american firm getting a license from the us commerce department. the us says it is doing this because he believes these entities have broken
1:33 am 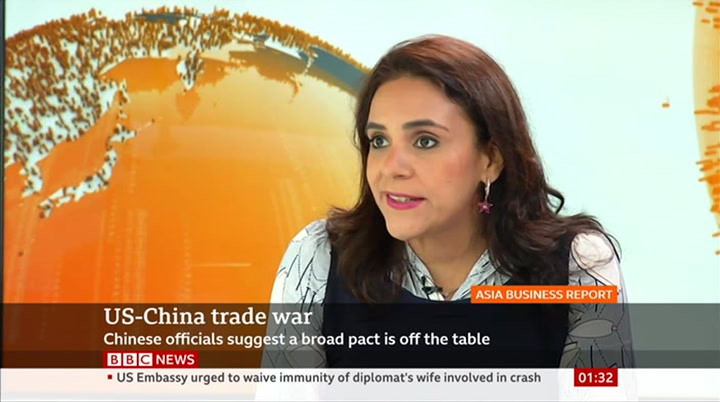 human rights in xinjiang where it is alleged millions have input and attention and treated badly by the chinese government. interestingly, there are eight technology firms, some of china's biggest artificial intelligence, video surveillance foams and really at the forefront to try to push china's national strategy forward of getting ahead in these technology areas so i expect we will see some very angry reaction from the chinese and possibly some retaliation. the timing is significant and the americans will be using these as leveraged in the ongoing negotiations? it comes with the 13th round of trade talks expected to take place in washington this thursday between the chinese and the united states. this will be front and centre. it will be seen by the chinese as a very bold move at a
1:34 am 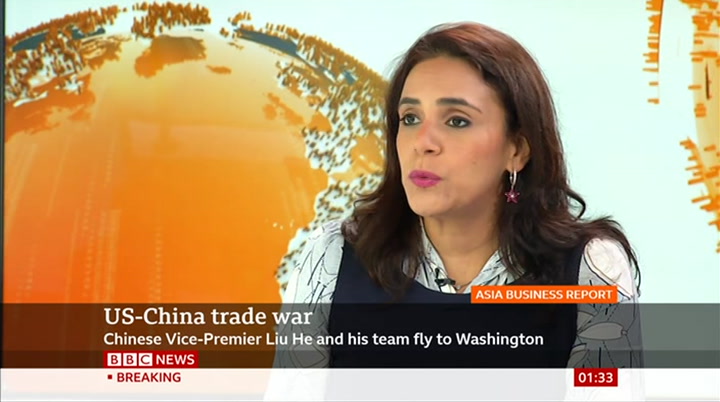 time when they have increased agricultural purchases in a gesture of good will and also at a time when the us is under pressure and the economy is under pressure with many companies saying increased tariffs are hurting their bottom line. one of the major sticking points has been forced technology transfers, what does this mean? american companies in china i was say that, in order to get market access, the deal they have to do with chinese companies is to hand over that technology. beijing says that is not true and it is completely voluntary and nothing falls about this that if you take a look at some of these statistics, into thousand i8, 20 i% of american firms that were interviewed by the us chamber of commerce said they felt some pressure to hand over their technology to chinese firms and it is particularly in the high—tech
1:35 am 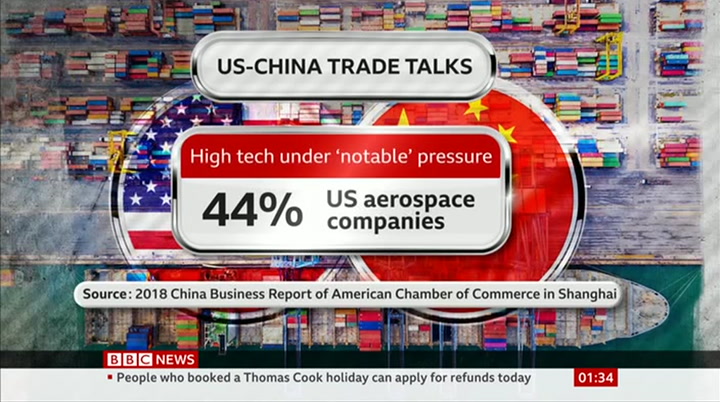 industry. 44% of american aerospace companies felt notable pressure while 41% of chemical foams felt pressure. china consistently says that fast technology transfer is something americans go on about but it is not a reality but according to this data, it is something american firms feel strongly about. 13th round of negotiation and this will be denser than all the others. thank you very much. from one asian trade deal to another, the us and japan have signed a limited agreement that president trump says will keep economic ties in agriculture and digital commerce but one industry has been left out. this trade agreement is a big winnerfor american farmers who lost out on other markets when the us pulled out the tra ns—pacific partnership.
1:36 am 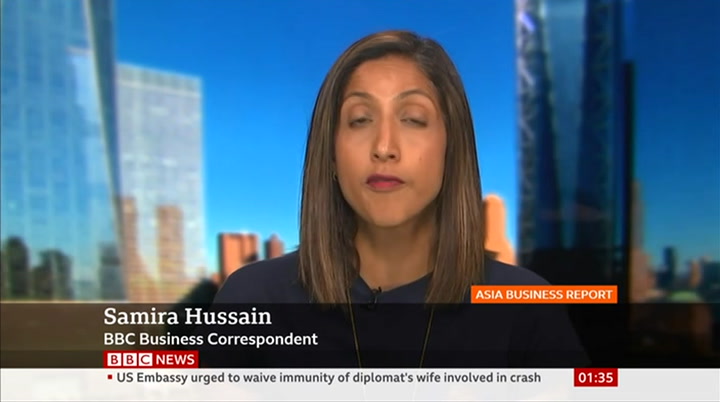 other markets when the us pulled out the trans—pacific partnership. japan already in pots around $14 billion worth of farm goods from the us. under this new agreement, japan will open new markets to about $7 billion in american agricultural products and japanese terrace of beef, wheat, cheese and other imports from the us will either be significantly reduced 01’ will either be significantly reduced or eliminated completely. however, absent from this trade deal was any mention of the auto sector. that is the big sticking point between the two countries. japanese cars already face a 2.5% tariff and mr trump has threatened to impose more duties on all foreign—made cars, wiring japan's auto industry. shinzo abe says he received assurances it would be spared from any additional penalties. south korean tech giant samsung says its profits likely felt
1:37 am 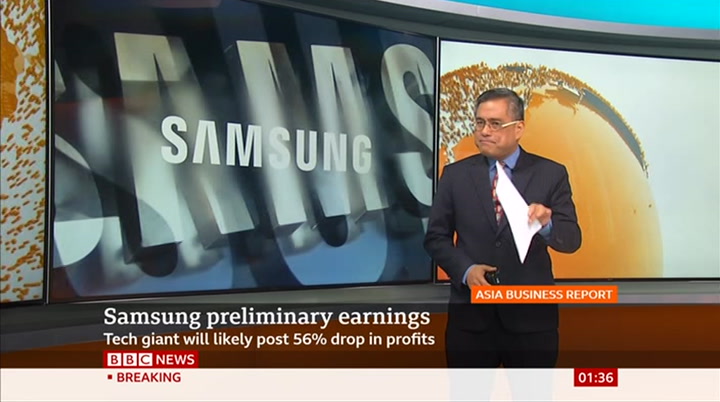 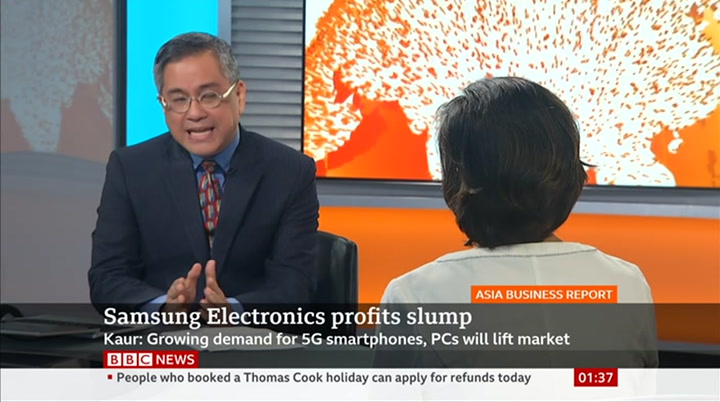 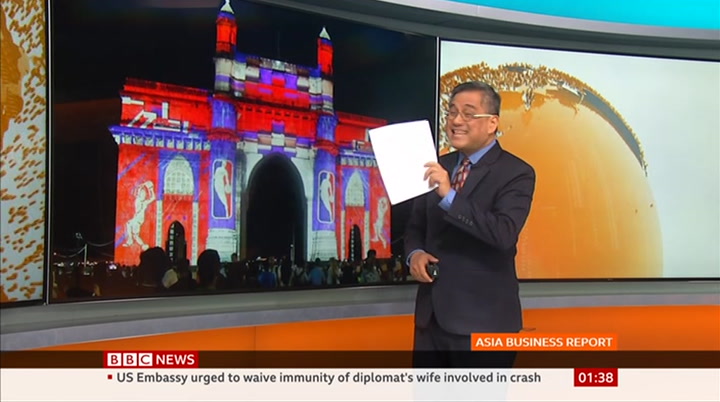 weekend wanting to turn young indians into fans and find talent in the country, with india being such a big cricketing nation and with the rise of other sporting links, can it develop an appetite for basketball? we went to the basketball courts in mumbai. i cannot stop dreaming about it every night. i wanted to be part of history. india has been a priority market for the nba for a number of years now. it is young, massive, very tech savvy.
1:40 am 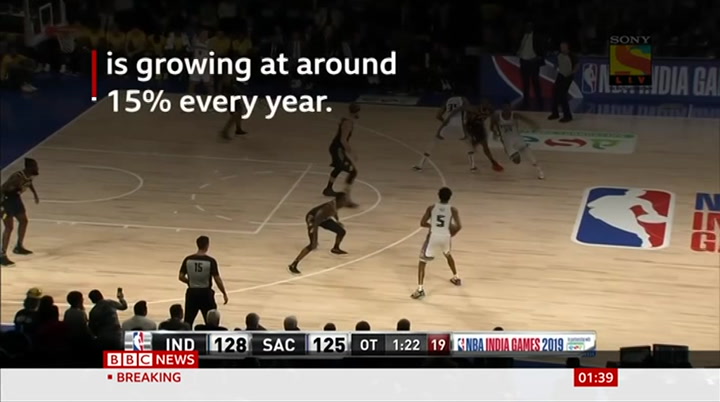 if someone comes to their first game and it is exciting, become a fan. indians love to celebrate, a spectacle, great movie, great dance, thatis spectacle, great movie, great dance, that is what basketball is. realistically, india is always going to bea realistically, india is always going to be a cricket loving nation but we think there are great factors to make basketball the number two spot in this country stop —— sport. 0ur our two most immediate goals are to see the development of some top tier talent and serious consideration of the launch of a
1:41 am 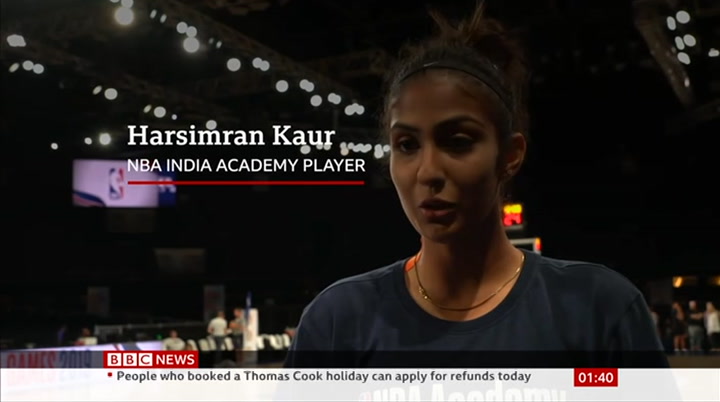 my aim is to make an in the wnba and i know it is very, very difficult. let's have a quick look at the markets. as you can see, the nikkei is up by about 1% due to the positive us— japan trade deal forged after the market close. thank you so much for investing your time with us. much for investing your time with us. sport today coming up next. our main headline: president trump is accused of abandoning america's kurdish allies, as he withdraws us troops from northern syria
1:42 am 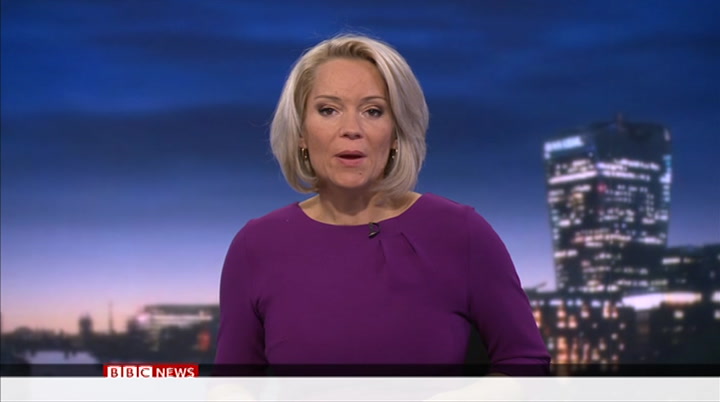 a major new exhibition, exploring how western artists have been influenced by the islamic world. is opening at the british museum. will gompertz reports. laid out before us, 500 years of inspiration, continuous appropriation and exchange between the islamic world on the west. a near conversation between two cultures, whose artists were intrigued and influenced by each other. so, this room demonstrates the cultural exchange between the west and the east, or the west and the orient. two dishes, which you would think are made at the same time, because they're nearly identical. but this one, here, was actually made in the 19th century. this was made by a french ceramicist and his name was theodore deck. this one here was made in turkey, and this was actually made in the 16th century. so, you can see that theodore deck, here, nearly 300 years later, has done a very good
1:43 am 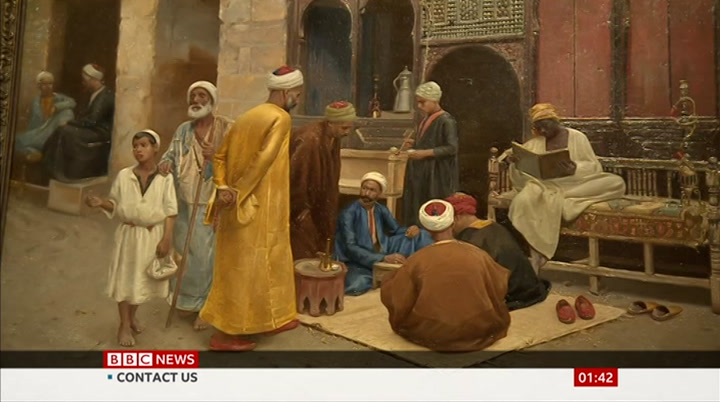 job at imitating this. the central room in the exhibition confronts a central issue in the show, which is the way that western artists controversially painted the islamic world in the 19th century — depicting it as the romantic orient, exotic and quaint. depicting it as the romantic 0rient, exotic and quaint. colonial powers like great britain were seeking to expand the empire, and sustain it. and one of the strategies of doing so was to derogatise or belittle other cultures. while they look romantic at first glance, actually, if they were truly romantic, they'd be romanticising islamic civilisation as a whole. which, as we know, contributed tremendously to art, culture, science, philosophy and beyond. bringing us up to the 21st century perspective, here we an artist who's from palestine, and she's directly referencing traditional harem scenes that we might have seen in 19th century 0rientalist paintings, done by generally male westerners.
1:44 am 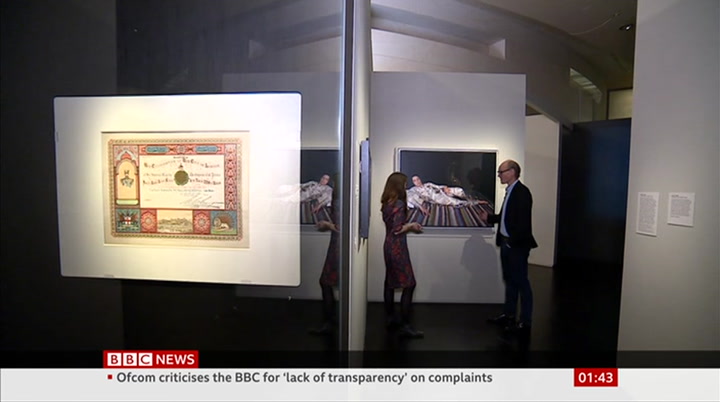 but also isn't it in conversation with western art? i mean, the reclining nude? absolutely, absolutely. coming from the perspective of somebody from the middle east and critiquing traditional western art, their view of the east. it's a great play back and forth. the conversation continues? it does. it is the way of artists, whether from the east or the west, to explore, exchange and reinterpret ideas and experiences. that is the history and future of art. will gompertz, bbc news. now on bbc news, sport today. it is not every day you see something like this, a humpback whales in the river thames at nearly 30 metres long, it was described as not being in any distress. scientists monitoring the animal saying it was behaving perfectly normally.
1:45 am 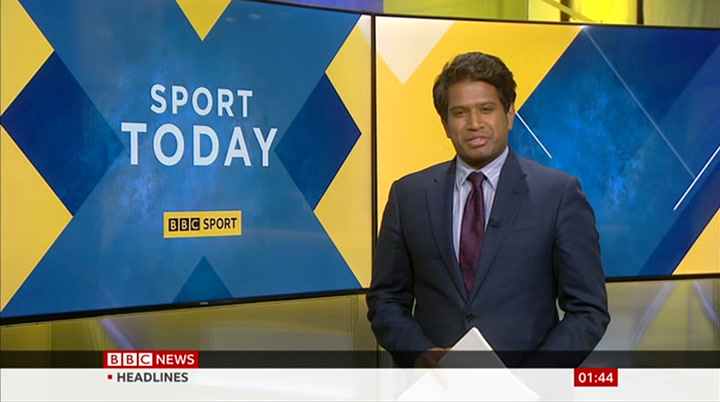 hello, i'm gavin ramjaun and this is sport today, live from the bbc sport centre. coming up on this programme: murray marches on — the former world number one continues his remarkable comeback from hip surgery in china. the super typhoon that threatens to cause mayhem at the rugby world cup injapan. we'll be charting its path. and making history, a second string sri lanka defeat the world's number one ranked t20 side in their backyard. hello and welcome to the programme. andy murray's through to the second round of the shanghai masters after coming from behind to beat juan ignacio londero. the win means he'll climb inside the world's top 250. joe lynskey reports. the comeback continues, but the matches aren't getting any easier for andy murray. after reaching the quarterfinals of the china open, the former world number one will have
1:46 am