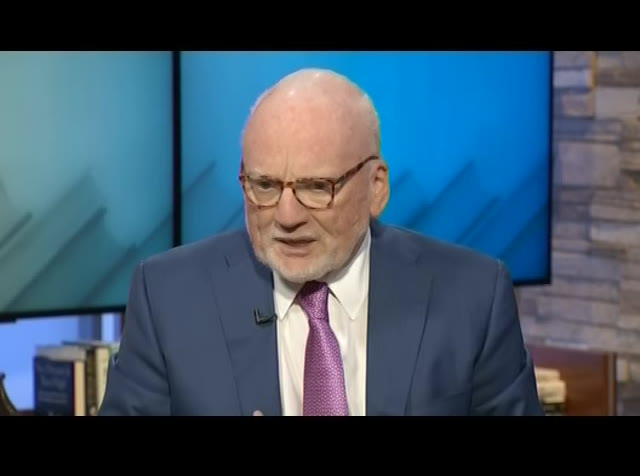 attack? now but they are resilient. can someone penetrate their network? not sure because there is no perimeter anymore but can they do damage to those companies and the answer is no. >> watch booktv every weekend on c-span2. >> one of the things we like to do at booktv is preview the books, we want to introduce you to james poniewozik, the author of this book, "audience of 1: donald trump, television, and the politics of illusion". tell us about your day job. >> i'm the chief television critic for the new york times.
10:47 am 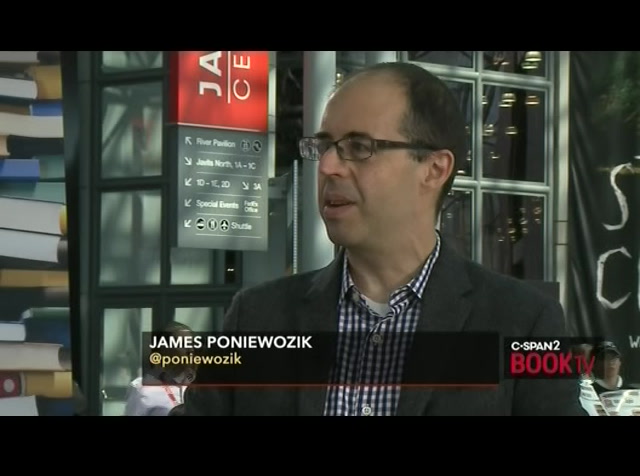 i like to say the television critic has become more like a book critic in that there is so much sifting rather than attempting to cover everything, but it is fantastic work in the television is a great excuse to write about everything because tv is the nervous system of america and it reflects whatever people are interested in or obsessed with. i write about sitcoms and reality tv and the circumstances were right. a pretty vast field. >> how much time do you spend with the networks as opposed to amazon, who lou etc.?
10:48 am 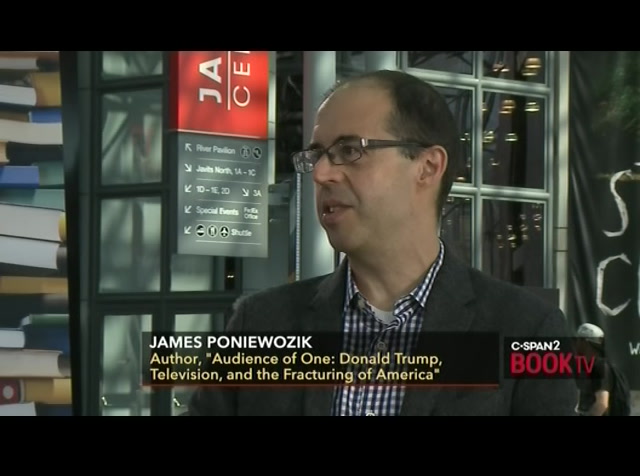 >> the old traditional networks, part of the subject of the book, a vast drop through that content ocean and it used to be every fall, three or four networks would release the shows they were going to premiere the coming season, that is what we were concerned and fall television is one thing among many, so much on amazon. hbo, showtime, basic cable, premium cable. what we used to think of as tv is a tiny amount of what constitutes television and a lot of television is not on what we strictly call television, it is not cable, not broadcast, it is piped into your home over the internet. >> this is a quote from your new book which is coming out this fall, donald trump, the
10:49 am

television character, was born on august 21, 1980. what does that mean? >> that was the date of donald trump's first major national television appearance, on the today show with tom brokaw talking about the incipient building of trump tower and other projects and what i mean, for the purposes of my book is my book is not biography. say though it follows donald trump's life. it is the study of a character, a long time, decades long performance in the media that donald trump sought out, kept himself in play for years. speaking -- nobody recognized it at the time speaking to the host of today on a network where he would later host the
10:50 am 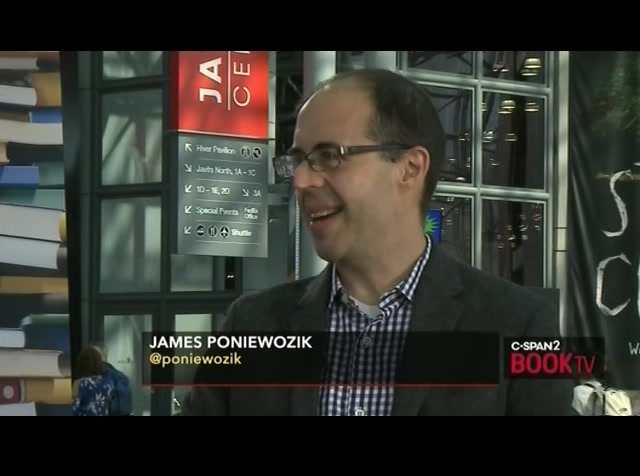 apprentice, presidential debates, be revealed on access hollywood, that was really the birth of a television character and long time performance that would become hugely significant. >> host: was a purposeful performance in your view? >> i sort of say in the book it is difficult to get into the question, what is the real donald trump and what is not? people wonder about that cute you is what he does in the media and on television a fiction? is it the real him? as it himself but amplified when he notices tension on him to do i tend to believe the latter is closer. you present an extreme form of your self or depending on the circumstances a modulated form
10:51 am 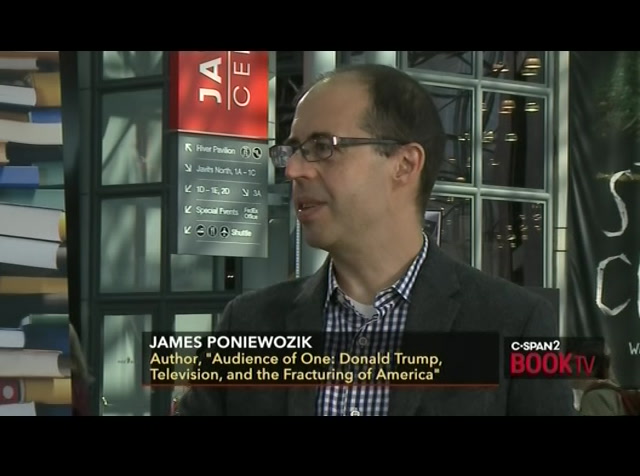 of your self depending on what the audience, the camera eyeball that is on you requires. i think there was always something performative about donald trump from the very beginning. the manner of the performance, what he was trying to get across in it, the tenor, the tone of the performance shift time, with his goals of the time and in the temperament of the media which changed tremendously from 1980 until the time he was able to become less impressive. >> host: has he been consistent in his use of the media? >> guest: he has been consistent in that he has used the media. one thing i say, an inspiration to me for writing the book is i have seen a lot of how did we get donald trump, treat him as a politician or businessman for
10:52 am 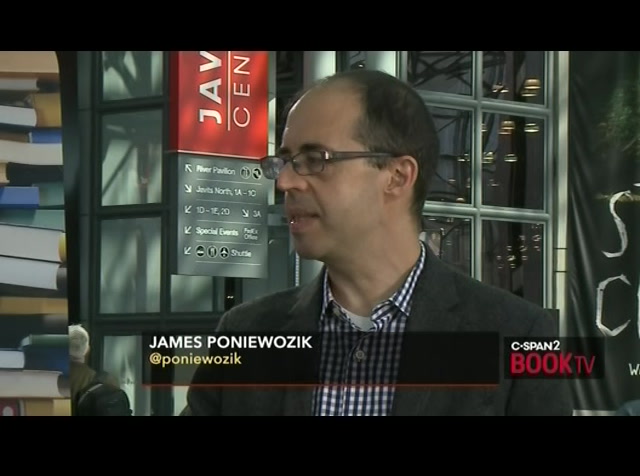 whom media is ancillary and that is backwards. the celebrity always came first. even in the 1970s when he was on national television he was getting himself -- according gossip columns. he came from a notion that he wanted to bring show business into his work. he felt his work was show business and he eventually figured out how to leverage that into a brand of success etc. etc.. when you go back to the first tv appearances, it sounds like a very different donald trump. >> what does it tell my? >> guest: sort of unctuous. speaks in little sentences and paragraphs.
10:53 am 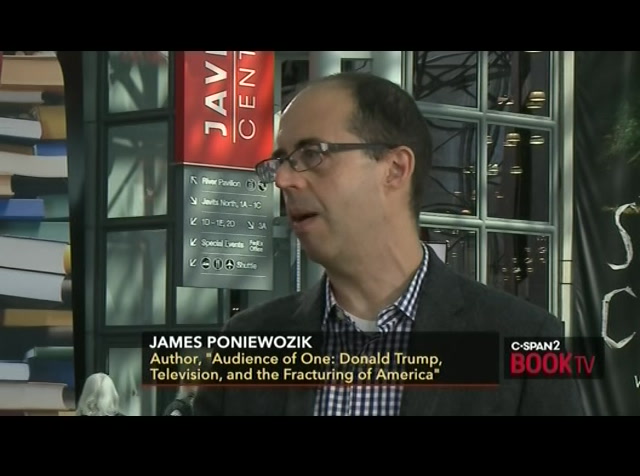 concerned with there is sort of a tone of insouciance and entertainingly ambitious businessman but not the sort of pugilistic kind of staccato trump the we saw on the campaign trail. as i say in the book there are many explanations, people change over time, mental circuitry changes, the way we speak may change but very much in 1980 were hearing the voice of mainstream media which was the pre-network area in which millions of people walked stage shows and one had to present a performance that was not targeted as you say in the television context or the political context. >> in your view, the news we get from tv has improved or
10:54 am 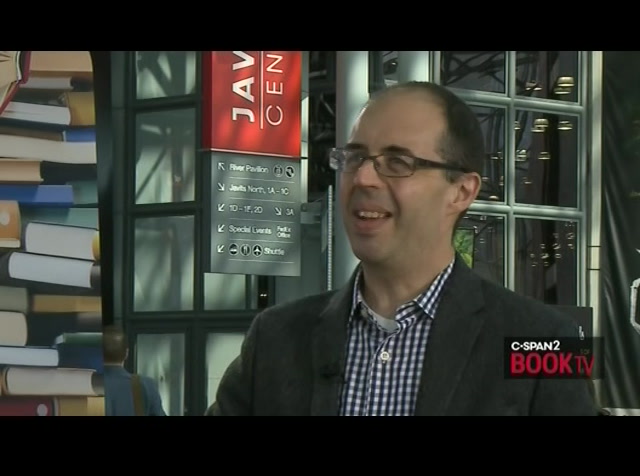 degraded over the years? >> i will give you the question, a good question, although i am very critical of the 24 hour news cycle, it is great that there is a lot, you can turn on big news happening and find out immediately rather than waiting for 6:30 or the next morning paper things that happened. if one is a selective media consumer you have access to a lot more information. and that is a very good thing in theory. and practice, i also think while even going back to the 1980s there is always been an entertainment element to tv news, in cable news particularly that has been
10:55 am 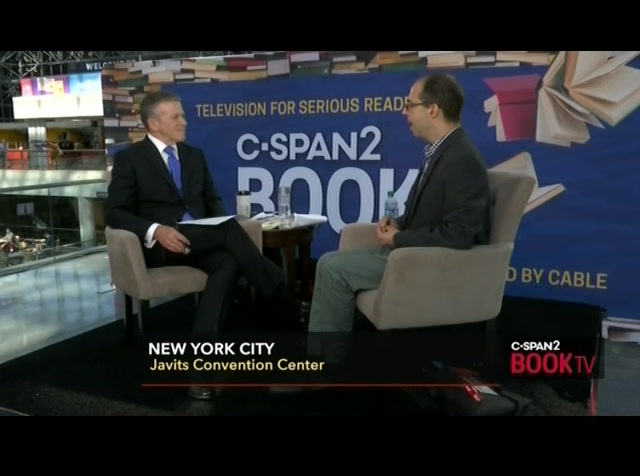 exaggerated because you are putting out a news product 24 hours a day, you have a business imperative of how you agitate people, whether there are things happen or not and keep them watching and often that is with sensationalism, controversy, anger. he did not just make himself a star and reality tv but made himself a star on fox news when he ran for president and i really think because we and television are always in a feedback loop that affects public discourse and how we relate to each other. it makes the temperature and the heartbeat of our conversation that much more heated and agitated so that
10:56 am 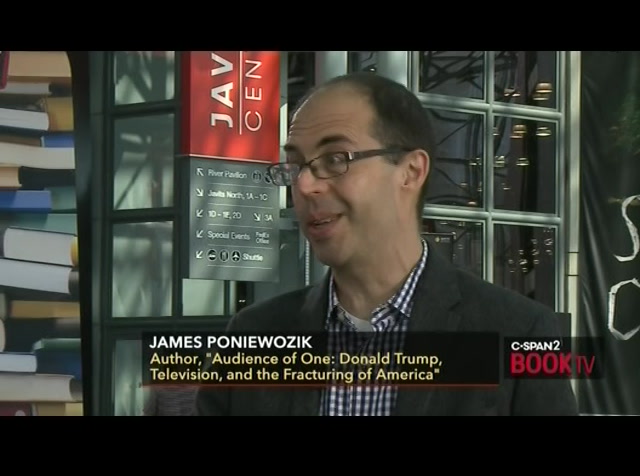 part -- >> host: how do you become a television critic? >> guest: practice practice practice. i will honestly say for all you kids out there who get into the business almost everybody who does this job has done it accidentally. i have always -- tv junkie as a kid like a lot of kids. i had older brothers and sisters, i watched things that were age inappropriate. i got a very broad education in tv but i was always interested in media and how it reflects larger society and what we care about but i didn't set out with a 5-year plan to be a television critic. i was a freelance writer in the 90s working on my first time journalism job, writing about the media and related subjects and got phoned up by time
10:57 am 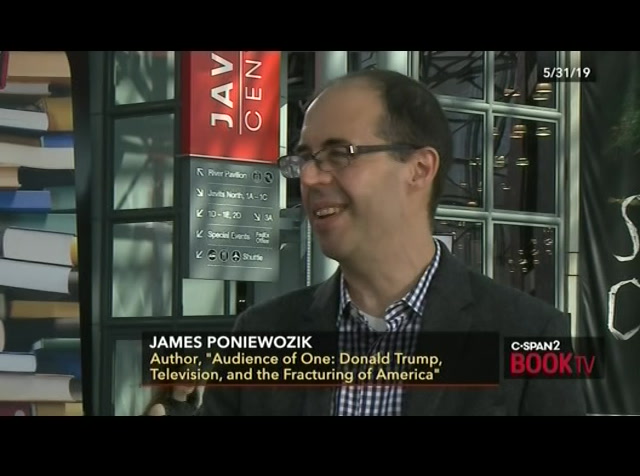 magazine at one point who had an opening and i fell into it a little bit. i think it is like a lot of specialized jobs in journalism, you have something you are interested in and every job you had used year toward what you are interested in and a little more until you are doing that. >> host: where did the title >> host: where did the title "audience of 1: donald trump, television, and the politics of illusion" come from? >> guest: that is talking about donald trump's presidency, not talking about just how donald trump used television but as president he has been used by it which is to say he is an avid cable news the or, wakes up with fox and friends, gets agitated by television, tweets about it, those tweets become the news, he watches the news reaction to his tweets, tweets
10:58 am 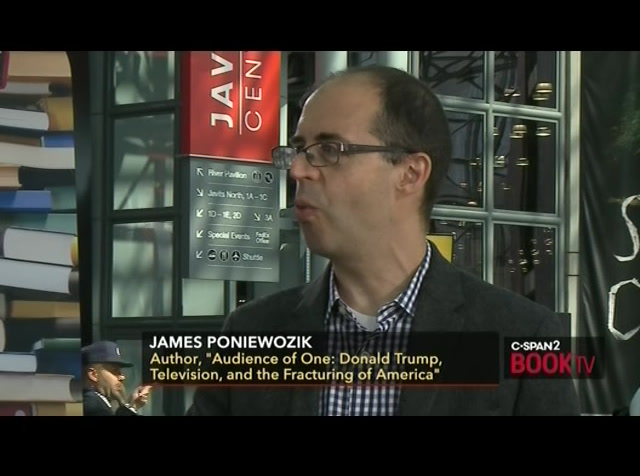 further. there is something in the modern media culture where it is like we are living in a show that is being produced for one viewer in chief. the title has larger resonance because one thing the book is talking about as well as donald trump is the tendency in media to move from this monoculture, smooth tones mass media audience to this internet bubble audience where we are broken into smaller and smaller groups until each of us is an audience of one. >> host: do you find yourself with a grudging respect for donald trump's manipulation of television? >> guest: you don't become president without being good at something and donald trump became president because he is
10:59 am 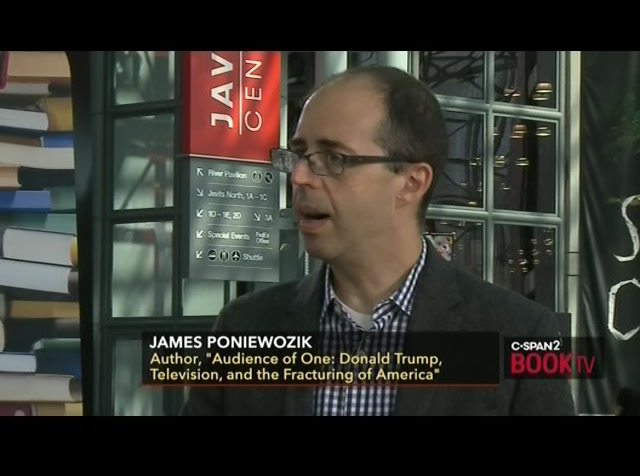 very good at directing attention to himself and using attention. television is biased from my profession, one of the most powerful or the most powerful forces in our culture and he instinctually ends purposely, merged with him, he think like a cable news television camera, he has this sort of instinctual hunger for conflict and for knowing the pressure point of his audience and what line will get a response and what will send the meter into the red. call it respect, call it whatever you want it is hard not to be odd by that if you study it in any way. >> host: that is a quick preview of "audience of 1: donald trump, television, and the politics of illusion," new york times chief television critic james poniewozik's first
11:00 am 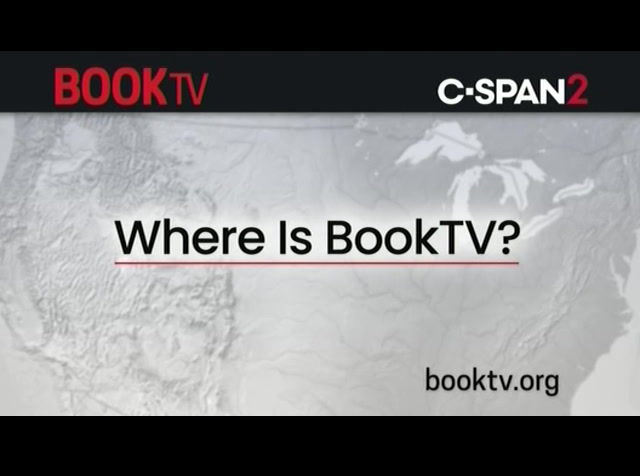 book, thanks for joining us on booktv. >> here's a look at some of the events booktv will cover this week. monday on washington dc's east bookshop, david epstein argues a person with a general background is more likely to succeed than someone with a specialized skill set. nixon presidential library in california, casey pipes recounts the post white house years of president nixon. tuesday, look for us at the st. louis county library where john mc manis will talk about the pacific theater during world war ii. all of these events are open to the public. if you are in attendance take a picture and tag us at booktv, facebook, or instagram.
left
right
disc Borrow a DVD of this show DVD
tv