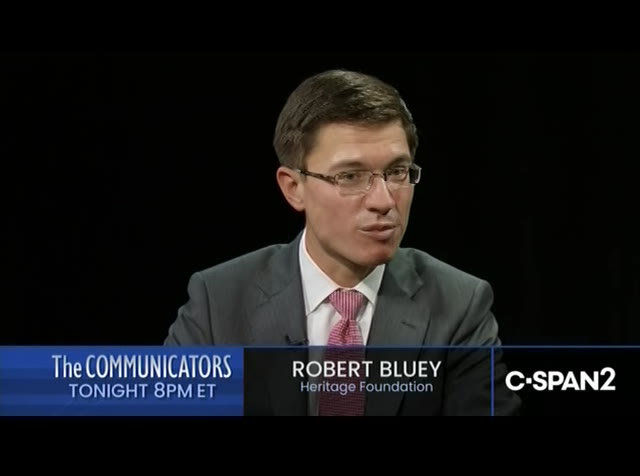 heritage foundation and patrick hedger from the competitive enterprise institute . >> as consumers we can demand that of users of facebook on twitter and google that if we're going to be on that platform we expect that they will respect our ability to mitigate. if we don't like it, we can quit. it seems hard to levy an acquisition that big tech is a net negative in any way or form when somebody like dennis prager is getting 1 billion views on the products and the videos that he's putting out. >> watch the communicators tonight at 8 pm eastern on cspan2. >> when it comes to potential for gun legislation passing through the senate and house and being signed by the president, joining us to talk about what some have to go go this way in order to make this happen is scott along with the hill, the covers capitol hill, senior staff writer. good morning to you . a story that you posted this morning on the five factors
11:40 am 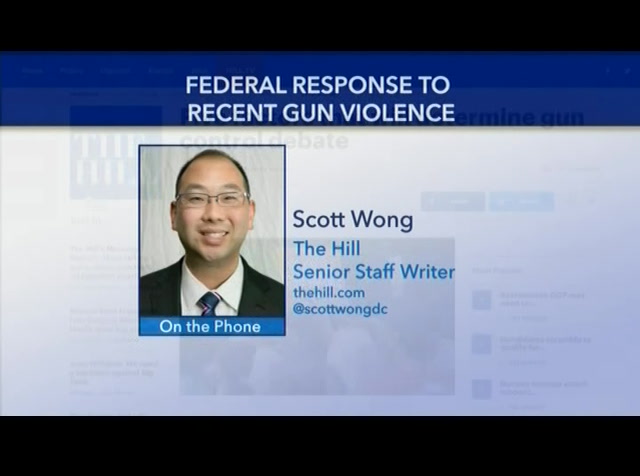 that will determine the gun control debate going forward, of that list, what's the strongest factor? >> the strongest factor is president trump himself as well as mitch mcconnell who runs the united states senate . without those two men, without the support from t those two men, no gun control measure will move through the congress and get to the president's desk and be signed into law a lot of this have to depend on how serious president trump is when he says he supports and endorses background checks because we've heard in the past after the parkland shooting in eflorida the president say exactly that, and he supports background checks and of course as we know, that was not backed up by any sort of action on capitol hill. it was uttered but never followed up on. instead, after lobbying strong lobbying on behalf of the nra, president trump and his administration shifted
11:41 am 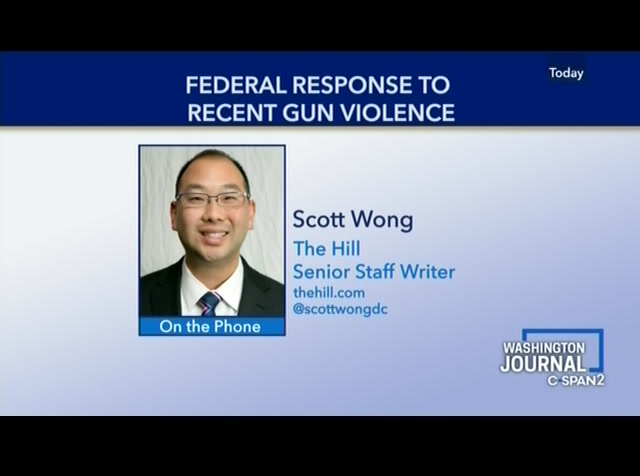 towards what they said was a hardening of schools, really boosting or ramping up security of the public school system and that became the focus rather than any sort of background check so it remains to be seen whether the president is going to put some teeth behind his words. >> host: what is the most comfortable approach senator mcconnell is taking? is it background checks or are there other avenues the senator could be comfortable pushing in the senate ? >> guest: reporters and i were surprised that mitch mcconnell who has been a staunch nra ally and is up for reelection in 2020 and obviously needs the support of his conservative base to turn out, to push him over the top for another six years in office, we were surprised on friday when mitch mcconnell said he was open to the idea of background checks
11:42 am 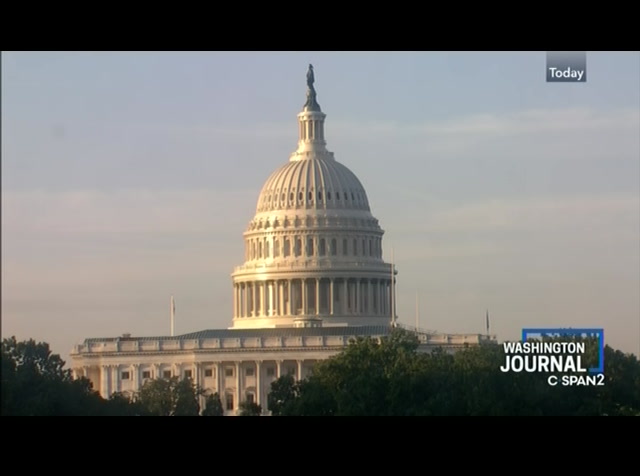 . among other measures including red flag legislation. that was encouraging to some, although as i mentioned before, until we start to see this process into motion and start to see activity on capitol hill, there is a lot of skepticism, especially on the part of democrats who feel like they seen this movie before and seen a lot of inaction in the past. >> we heard over the weekend about the president talking about these issues with senator pat toomey, senator joe manchin, what are they endorsing when it comes to legislation? >> guest: to me and manchin are known for theirbackground checks legislation . this would be legislation close gun show loophole, close loopholes regarding internet firearms sales. right now you can purchase guns at those two venues and
11:43 am 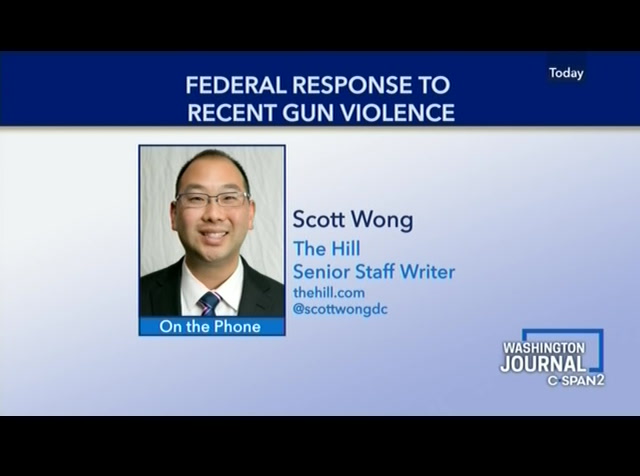 without going through a background check whereas if you go to a regular gun store, you need to go through a federal background check process and so these two senators, bipartisan senators in the wake of the sandy hook shooting and i believe it was 2012, these two senators came awful close to pushing something through the united states senate. a fellow six votes shy when it was all said and done and we have not seen real movement on any sort of major done reform legislation in the remaining years, even as we've seen a number of high profile shootings ranging from parkland to orlando to las vegas where the most lives were lost and so this is seen as a critical moment because it seems a number of
11:44 am 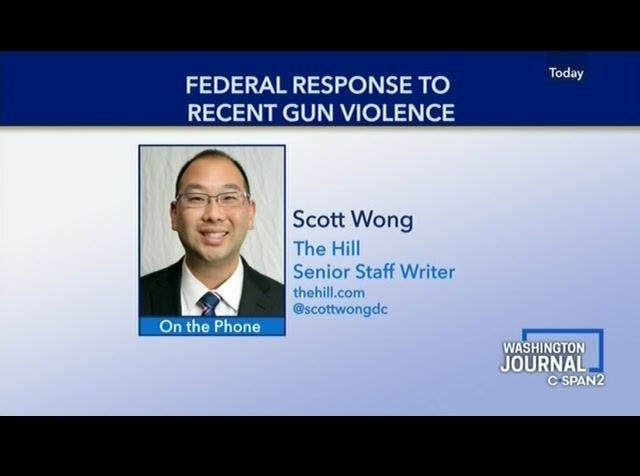 americans are simply frustrated this year volume of lives that have been lost and are really looking to our leaders for help to sort of stop the bloodshed. >> host: at the top of the list is a store you can find on the hill. you put publicsentiment as a major driver on whether something gets done or not . >> guest: exactly, the washington post over the weekend had a jarring image of the faces of the victims, 1100, more than 1100 victims of mass shootings in the course of our nations history over the past 50years . when you have that many people who have been lost to mass shootings, it seems after a while that everybody had some kind of connection, every american has some kind of connection whether those are all communities, those are all family were broken apart.
11:45 am 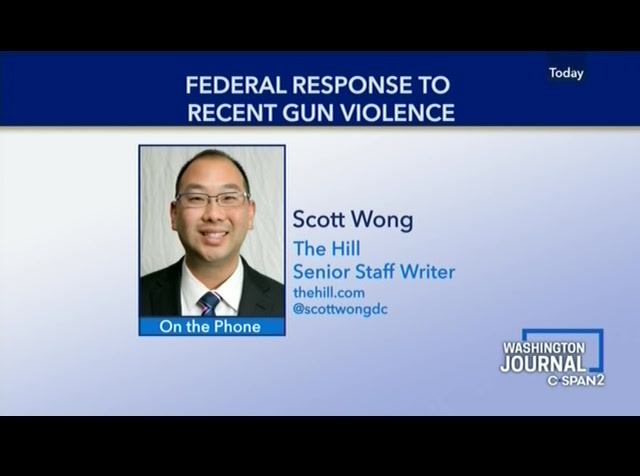 and even thinking about my own family, thinking back to an uncle who survived a mass shooting in the 80s . i've seen some of the victims of that mass shooting everyone has a connection now to something that happened . regarding these mass shootings and i think that's really driving a lot of this frustration and anger, so whereas in the past, a lot of americans turned to grief and sadness in the wakeof these events , people are just d, have grown so frustrated and really are looking to united tostates congress and to this president to do something and that was a chance that we heard at the mic line, the audio governor event last week and might the line or that message, a republican governor was a staunch nra ally and he quickly, the very next day heard that message mefrom his constituents and endorse more done reform that
11:46 am 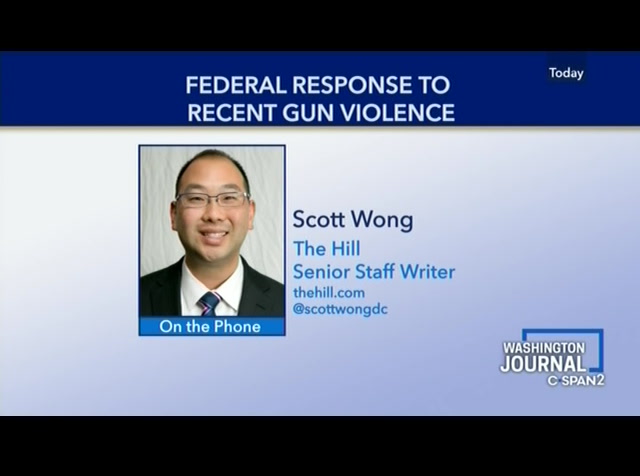 he had never in fact endorsed in the past so it seems like that frustration is boiling over and if having in effect on some allocations. >> host: here's a story that our guest reference from the washingtonpost, pictures from those lives lost . long, pompous just started their summer break. by the time it concludes back in september, what's the likelihood this issue will be front and center even with that much time passing ? >> guest: that's exactly right. with this president and in this trump era where it seems like we go through 10 different news cycles in the course of one week, we have four weeks remaining of this congressional recess and that's a long time before congress reconvenes in washington and starts to begin to have a real genuine
11:47 am 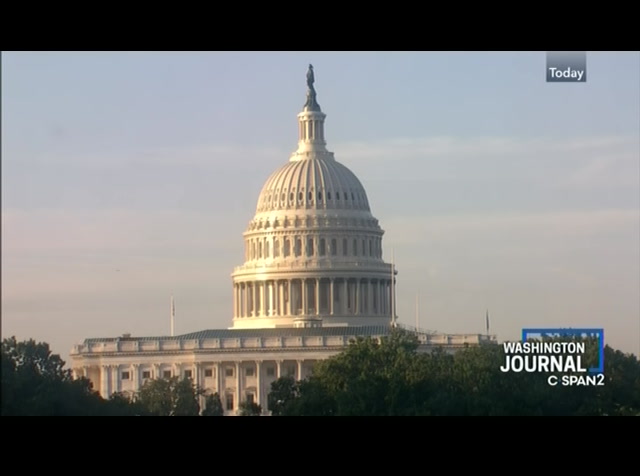 debate about done reform so everyone'ssort of scattered across the country right now in their respective districts . the lawmakers were on a weeklongtrip to israel . led by e steny hoyer and kevin mccarthy. everyone's across the country and the world during this recess so the real test will be what happens, whether there is any sort of momentum that is able to be preserved after this long 4 week recess and my earlier point was it seems like the media, the american public has often been distracted in this trump administration by controversy after controversy. and so it will be a real test to see if the american public and the media can stay focused on the issue of done reform by the time that congress reconvenes on september 7.
11:48 am 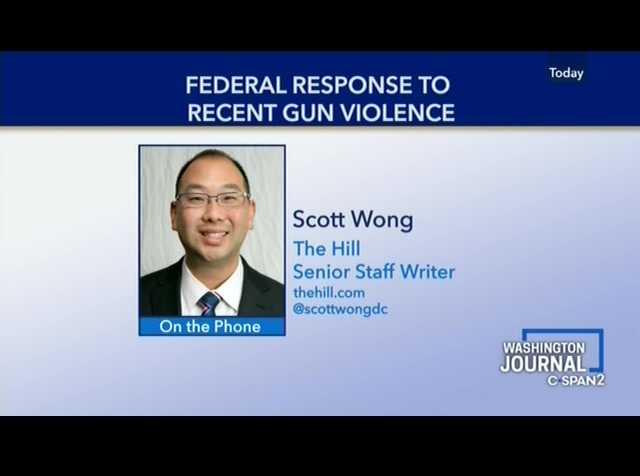 >> host: that story appears this morning thehill.com, taking a look at those factors that determine the future of new gun legislation . scott long,thanks for your time this morning . >> thanks so much.>> the house will be in order. >> for 40 years, c-span has been providing america unfiltered congress coverage of congress, the white house and public policy events from washington and around the country so you can make up your own mind. created by people in 1979, c-span is brought to you by your cable or satellite provider. c-span, your unfiltered view of governments. >> the president's nominee to be the next director of the bureau of alcohol tobacco firearms and explosives testified before the senate judiciary committee. the answer questions from lawmakers
left
right
disc Borrow a DVD of this show DVD
tv