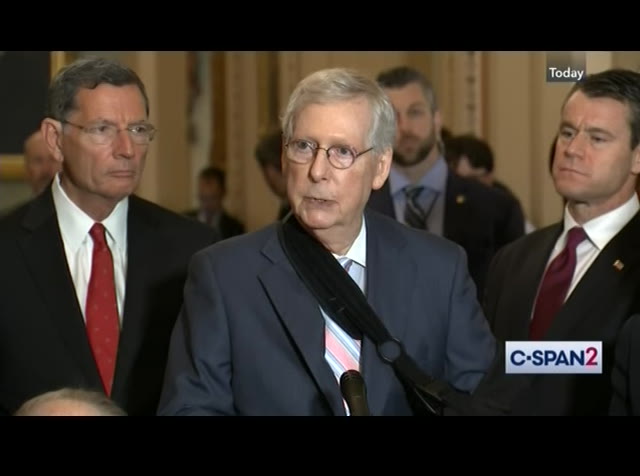 much we can actually achieve on this issue. i'm going to wait and assess the proposal that could actually become law at that.i will be happy to explain my vote one way or another but we were engaged here we put the level of seriousness that is completely nonexistent on the other side. it is all about trying to scare people and create crafts conferences. we need to try to make a lock. these were in this shootings in my opinion divert deserve a response. i hope we can get something that weekend actually become the law of the united states of america. [inaudible conversation] >> okay good afternoon everyone. thank you for coming and i am proud to be joined buy colleagues i sign in her honor. nella, we know what happened last month.
6:04 pm 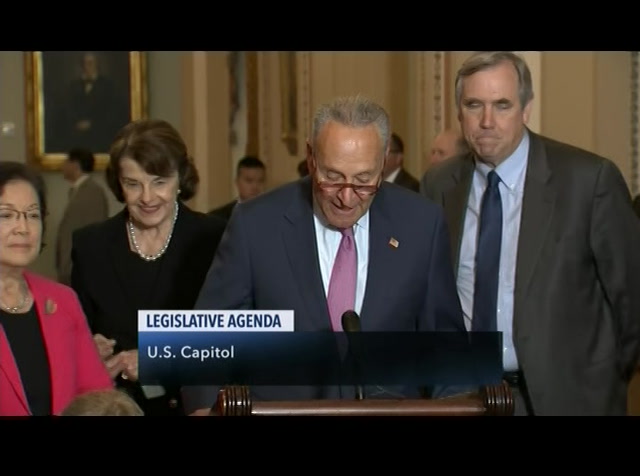 mass shootings claimed 51 lives in el paso dayton odessa. to say nothing of the dozens of lives lost every day and every single day, to gun violence here in america. we just wrapped up our lunch, we heard a powerfully moving spee speech, she drove home the point of how gun violence as scared is it too many communities across the country. overall this recess, the senate would hold a debate on gun violence when we turn to washington. we were ready to have a debate right now. enough is enough. is it too many americans were losing their lives to gun violence. it is time to bring the health house universal background check so to the floor for about, past the house we put a hundred and
6:05 pm 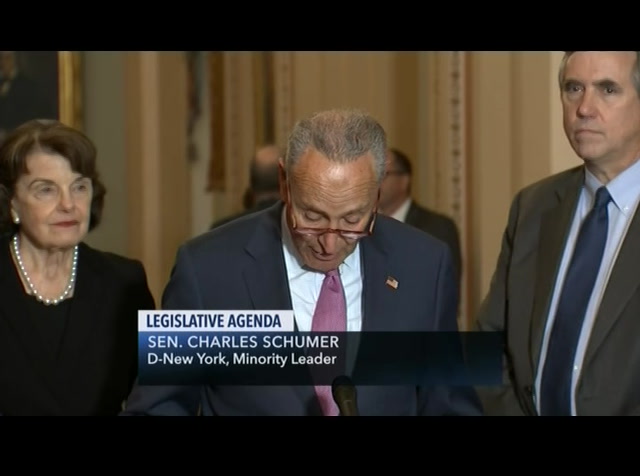 95 days ago and legislation graveyard ever since. we have to have a strong background check so preventing guns to fall into the strong hands in the first place. there were two people i can make that happen, president trump and later mcconnell. later today republican leaders will meet we put president trump. i strongly urge my republican colleagues to prevail in the present to support universal background checks. later mcconnell said to bring it bill to the floor it has the president support. this means that the historic opportunity for president trump to lead his party finally towards passing sensible gun safety laws. 93 percent of americans support background checks. the vast majority of gunowners and republicans support akron checks. so the president can provide republicans we put important
6:06 pm 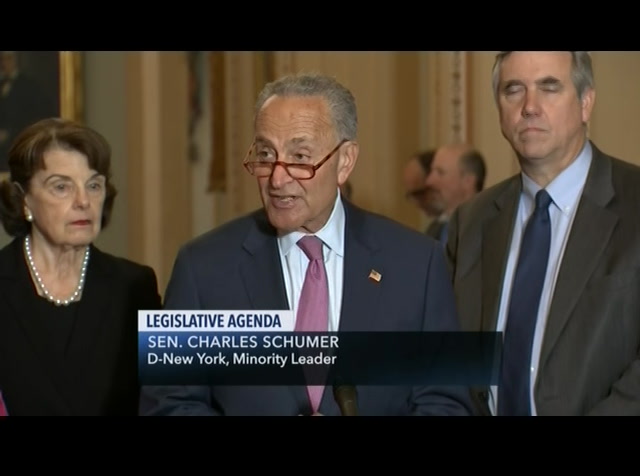 political cover, to finally block the nra and save lives and do the right thing. the question now is both of or not later mcconnell will allow the senate to consider house pass background checks on the senate floor. it's now. before more lives were lost. >> thank you very much leader. when i was in san francisco, i went down to northern playstation to see the new ammunition feeding device which is double barrel and contains hundred bullets. i sought a glock, and i also saw how it would be positioned on an assault weapon. the realization struck, of what these methods do in our society and our caucus we just finished, we had an opportunity to hear from a number of senators from different states and is just remarkable that something as simple as a universal background
6:07 pm 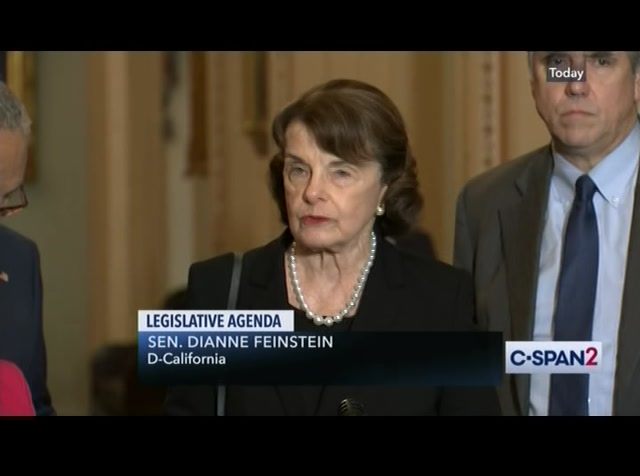 check would it be something that everyone welcomes. this morning i picked up the washington post and ice on page six, a poll that had been done buy the post. shows virtually 90 percent of the american people supporting universal background checks. why can't it happen. how is it not in the best interest of every man woman and child in this great country. to be protected that way. thank you. >> i'm coming here as a senator from a powerful second amendment state. citizens of oregon value the guns there gun collecting for target practice in hunting and defense but it's also state where the citizens, say we do
6:08 pm 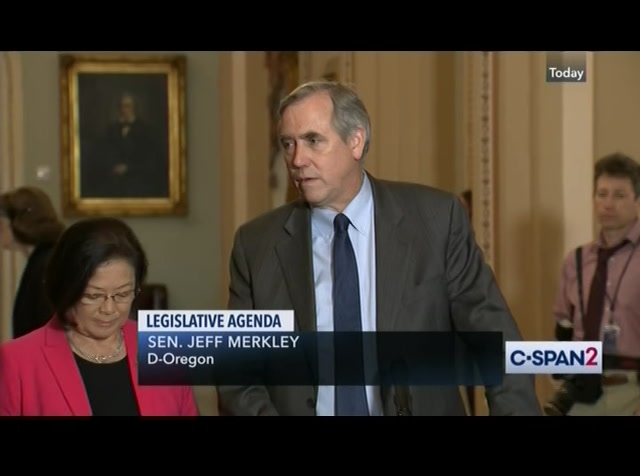 not want individuals who were deeply disturbed or who have valid backgrounds to have guns. we have a responsibility to make sure they don't fall into the right strong hands. in the they were not misused. it was near 2000, that the legislature close gun the pole. it was in the year 2015, they closed the craigslist level. and it was in 2018, this last year that they closed the boyfriend the old staying and sin if an individual has a restraining order against them, or stocking conviction that they don't have access to be able to buy a gun in our state. i do a lot of town halls. every county every year, 22 of my counties were a student extremely red. that issue comes up all the time and people strongly support a national system and has
6:09 pm 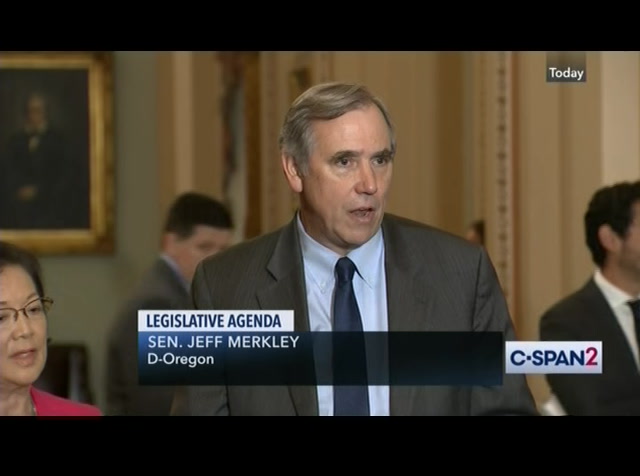 developed. because that went out a national system, oregon's laws, it's not effective. people can just go across the border to another state and people can use a straw buyer to buy in other states and then sell them. we need a national system. i think about the fact that we have cities names ringing in our ears like dayton and 27 wounded, nine dead, el paso, 22 dead in some dead, but let's understand this, there is a mass shooting more than once a day in 2019 in the united states of america. a mass shooting where more than four people were shot.
6:10 pm 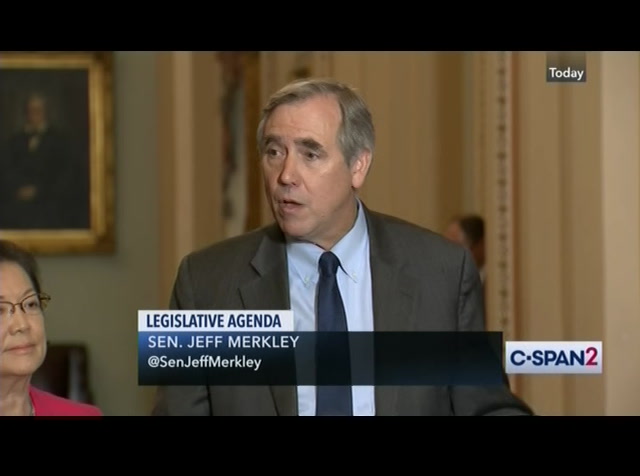 so it is time to act now. moments ago, the majority leader came out to this podium and when it said when it is waiting for the president. in the constitution there is a vision of congress that is leading the legislation body. the president is one phone call away from the nra any is strong-willed is fine collapses. we need to give the president is fine to sign the bill buy passing hr eight here in the u.s. senate that went out delay. >> thank you very much. we have 100 deaths buy firearms everything a day in this country. think about it. men and women and children. one hundred people die everything obey in our country. these were not normal times. we have present who lies everything obey and surrounds
6:11 pm 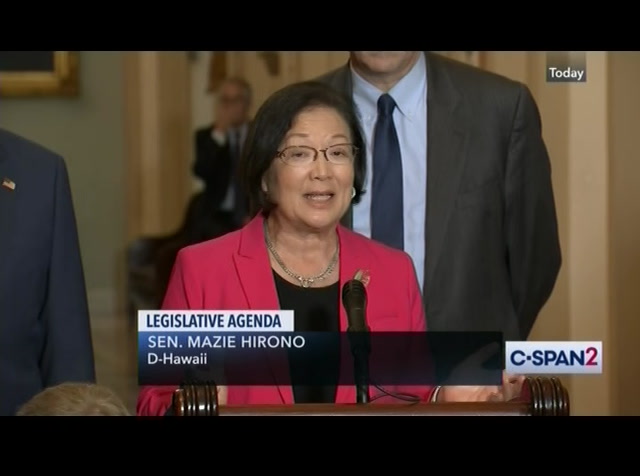 himself we put yes-men including apparently mitch mcconnell in a country that is so deeply divided on seven issues, as you heard, there is one issue which 90 percent of the american people agree and that is background checks. so i ask mitch mcconnell who you just heard from, staying when it has to wait for the president. to tell him what to do. this is the president who changes his mind from moment to moment. we're going to wait on him rather than to act on this. congress is to and enact hr eight, 200 days ago this happened. one hundred people dying everything obey in our country. do the math. this is very typical of mitch mcconnell. there were bills they should be bringing to the floor but when it won't because he's waiting brown for the president to see
6:12 pm 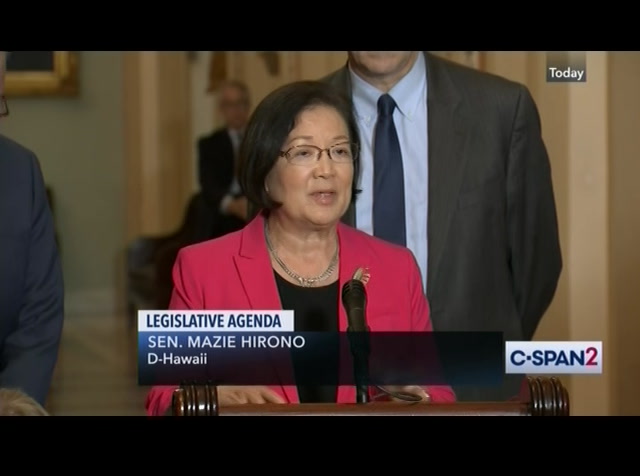 what when it will tell him what to do. this happened we put the shut down and now we were 90 percent of the american people support akron checks, when it is doing it on gun safety. we were standing here asking mitch mcconnell, telling him do your job. let's pass hr eight. we should not be seeing 100 more people die in our country everything obey. do something. >> i was safe there is one word that describes mitch mcconnell his attitude on this vital issue and life-and-death. in that is duck. doctor because when it is staying let the president decide. when it was asking you do you support it for commercial sales and when it ducked again. when it is afraid of this issue. that's not what a leader should be doing. [inaudible conversation]
6:13 pm 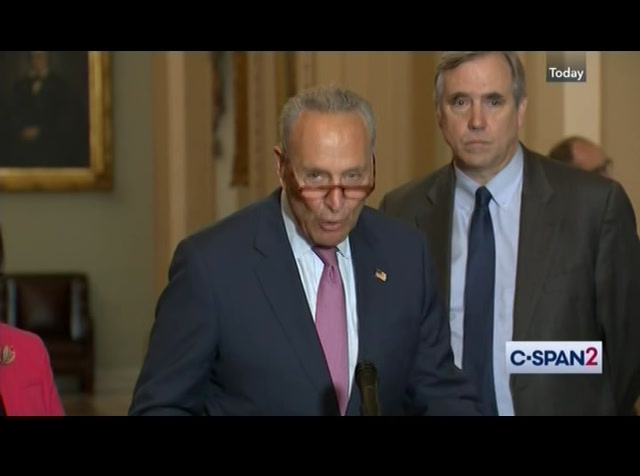 our goal is to get a goal on hr eight law. we don't want to call it a red flag over the words we were using. er extreme risk protection. we want to call that. this house is the very strong bill, we don't know where these negotiations between senator bromley, and senator graham. but we were insisting on a boat on background checks. if you have an extreme protection law, and someone let's mr. jones has a background check, you need it bait ground check to make this red flag law work. [inaudible conversation]
6:14 pm 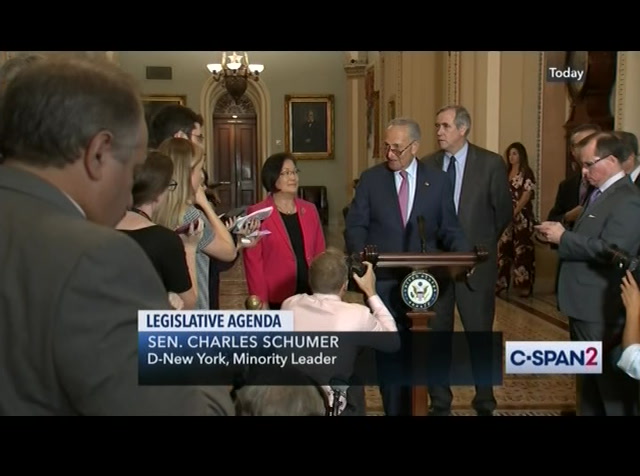 >> i heard mcconnell said the reason is poisonous pills. that's not the reason. their proposal which didn't work out. it puts $12 billion more for the ball. that's not going to happen. that's what's causing all of the problems. they how did 5 billion and the ticket out of hss and put it into dhs. they took 3.6 billion in backfill and the other one that they had used before and 3.6 new reprograms. they know darn well that a 12 billion-dollar additional monies for the wall it's not going to fly we put senate democrats or we put the house. so they were to get some serious that they've shown the president that they were particular markey. >> mayor of dayton, theatrical. >> came on him. there were people who die.
6:15 pm

put the bill on the floor. stop ducking the issue and calling names. shame on him. thank you everybody. [inaudible conversation] ♪ >> house will be in order. for 40 years cspan2 has been providing america of an lighthouse, the supreme court, and public policy events from washington dc and around the country. you make up your mind. created buy cable in 1979, cspan2 has brought to you buy your local cable or satellite provider. cspan2 your unfiltered view of government. cspan2 his washington journal life everyday. issues that impact you. coming up wednesday morning,
6:16 pm 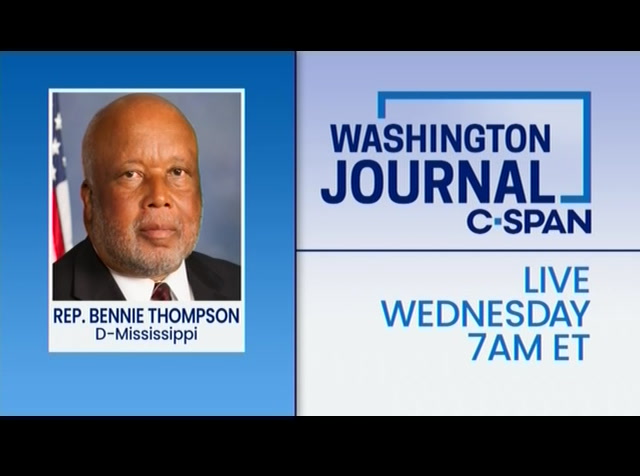 will discuss the 18th anniversary of the 911 terrorist attacks, or members of congress. first, mississippi congresswoman and homeland security benny thompson. then mississippi republican congressman michael guest. later, telework democratic senator and homeland security government committee member and wisconsin publican and homeland security affairs chair ron johnson. join the conversation all morning. be sure to watch cspan2 his washington journal life at 7:00 a.m. eastern on wednesday morning. ♪ at a confronts that historically talked about universities. president trump talked about hp use is at well as other issues like criminal justice reform and vesting opportunities down to
left
right
email Borrow Program
tv