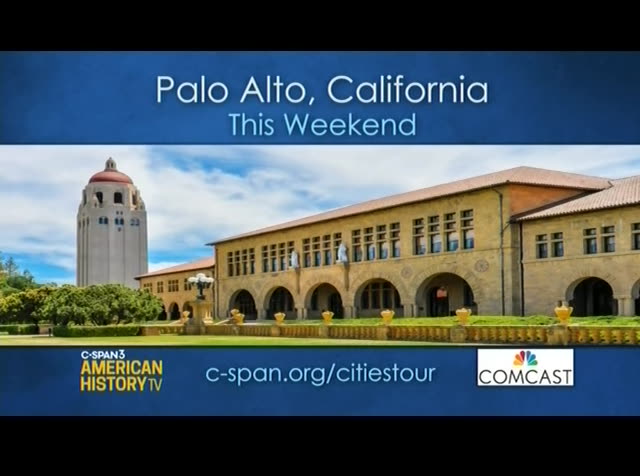 history of palo alto california. to watch more video from the cities on our tour visit .-span.org/cities tour we continue with a look at the history of palo alto. >> the following program has images some viewers may find disturbing. you are discretion is advised. the subtitle is the american relief exposition to soviet russia in the famine of 1921. and first thing i realize there 1921, 1922 about the famine in english. no one had a serious book. i would have to do double duty, the famine and the relief. it happens to a lot of people, i get into the archives i opened up an archival box and doing that opened up an entire world
10:39 am 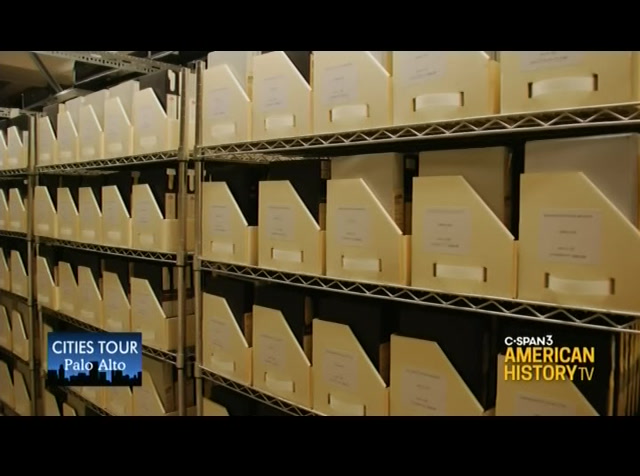 to me. i realized when hoover's men were keeping records of their humanitarian activities it was not simply the amount of food going him, people fed lives saved, where the kitchens were set up, those americans documented everything. also shineslection a light on this new thing called soviet russia. give politics. -- it's politics. it is turning russian society upside down. the changes that have taken place. the suffering. the winners. the losers. those that starved because they were on the wrong side of history. the russian-american cultural contrast, which americans had not expected it but was extreme , two different mentalities. these are young american men,
10:40 am 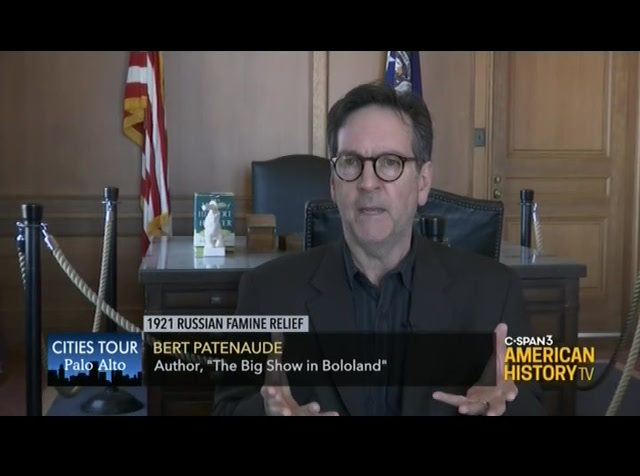 former doughboys. who had fought in the great war. out for great adventure. they wanted to continue the adventure they begun in the world war. a lot of them were not prepared for the scenes of horrific suffering they encountered. there were few people left to be sent out. breakdowns, nervous breakdowns. there were others that deal with the catastrophe, step up, and have the right mentality about it. they have the stamina and they have become among the heroes of the story. these americans were spread out across the heartland. they were stationed in remote villages and provincial towns. the recording to what was going some of the most
10:41 am 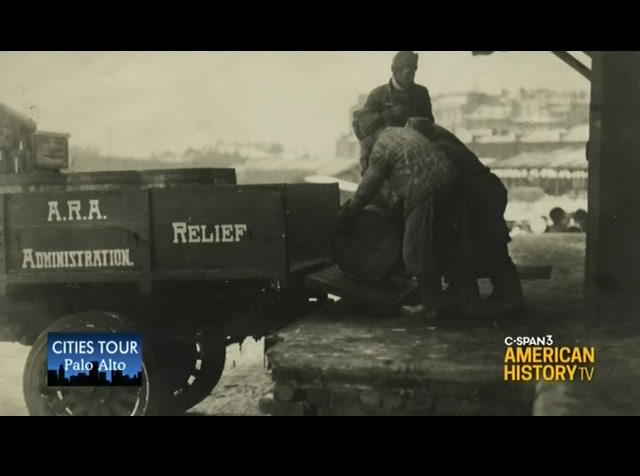 detailed reporting about soviet life in the period -- we say the aftermath of the revolution that was still can't going on in this -- you really can't understand the obstacles facing the americans unless you see the famine up close. these are the kinds of images, and when i give book talks, i'm always careful about which ones to use. these americans are posing and smiling, but behind them is a mass grave. these are three corpses of children. and this is a horrific scene, the famine centered in the region. what triggered the famine was a drought. two years of drought. two failed harvests in a row will produce a famine no matter what you do to try to counter it. in the background, don't forget
10:42 am 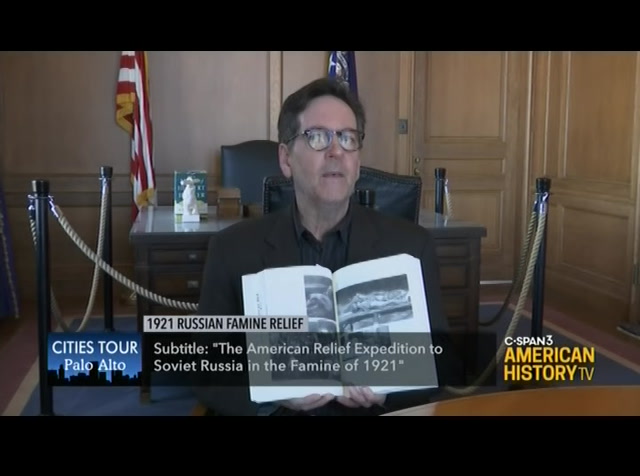 that we have a world war that caused tremendous economic dislocation in russia and in soviet russia, 1914 to 1917. we have two revolutions in 1917. russia is becoming a failed state, in a sense, by 1917 and 1918. in 1918, the inevitable civil war. the bolsheviks were trying to hold onto power. the reds. and on the periphery, the white armies are trying to dislodge them from power. the lights will inevitably or eventually be unsuccessful. for a time the whites control the grain growing regions of russia and the reds led by lenin
10:43 am 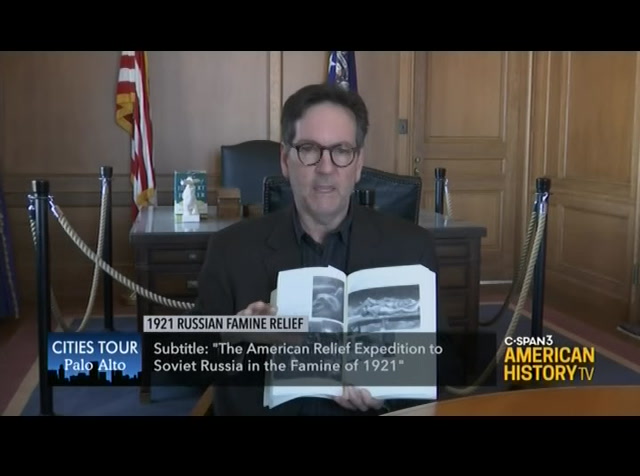 and trotsky, control a small piece of territory. people in the cities of soviet russia starved in 1918 and particularly 1920. to add all of these problems the war revolution and civil war, the bolsheviks have an idea when they come in to wipe out the free market. in other words to prevent peasants from trading their surplus grain. the bolsheviks began requisitioning grain. the idea is they are a communist government. trade should be outlawed under a communist regime. so this as well forces peasants to stop planting grain because they know it's going to be confiscated. the hazards, russia has known famines over the centuries and about every seven years there are pockets of famines.
10:44 am 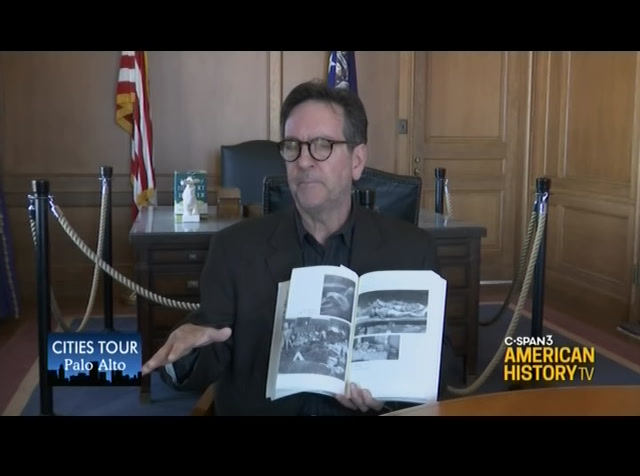 but the peasants are prepared. they have something they have put away for a rainy day. they have the surplus. in 1921, they have nothing. the summer of 1921, probably upwards of 20, 25 or 30 million people are threatened with starvation in soviet russia and very briefly this is a soviet government. it does not want to ask the outside world for health. the writer maxim gorky issues a call for help. the only country that was
10:45 am 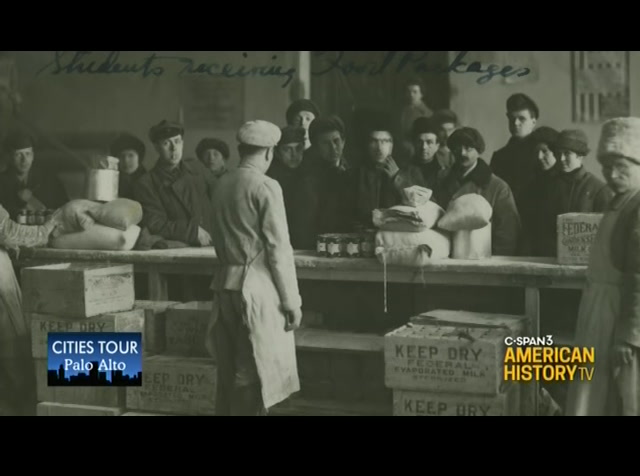 capable of doing havele of similar to what we had across europe. and then a scouting party of american relief workers gets to the region and sees scenes of horror. you can see they do the equivalent of waving their hands to moscow. this is inside a children's home and these children are still going. these are among the toughest to look at. this is a wizened, you might think is an old person. person. a
10:46 am 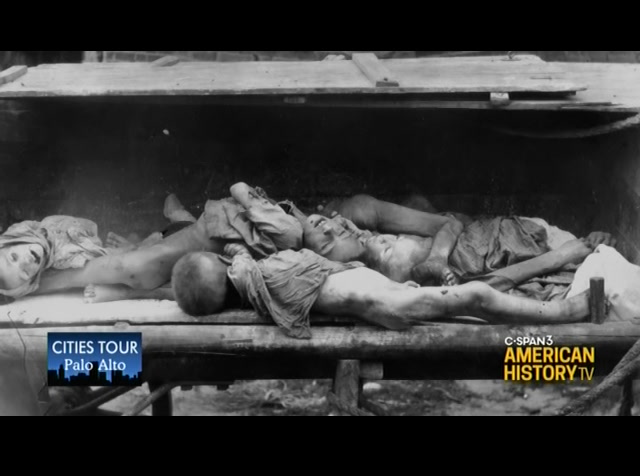 actually a girl. victims of the famine. so that is one. two, very important, the americans will have to feed adults as well as children. the original plan was to feed 3 million children. they established a medical program because they realized food alone won't do it. there's typhus, cholera, all types of diseases going on. what they need to do is begin an inoculation program. they need to bring the medications because russia has nothing. i like showing a photo of the young, dynamic hoover. it is hard for americans to imagine but this hoover has , certain charisma and was adored by the people that worked under him. he was called the chief.
10:47 am 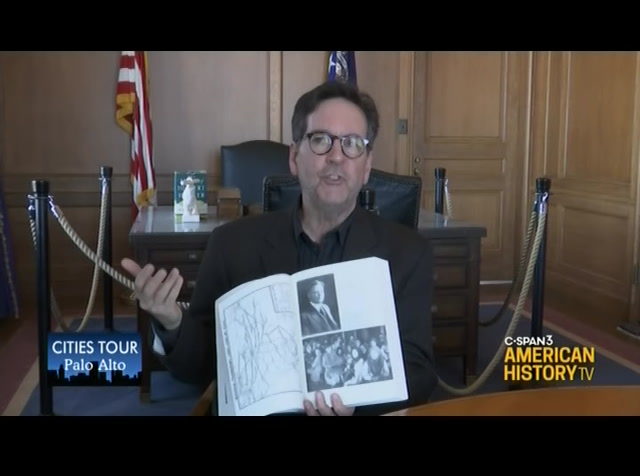 most of the men would not call him that to his name, but a lot of letters to hoover by his associates. great loyalty by the men under him to hoover. do it for hoover was the slogan of the american relief workers in russia for example. he is already at this time in 1921 considered presidential material. he had both parties wanting to draft him for president in 1920. so the kind of photographs herbert hoover wanted americans to see, it's one of my favorite photographs in all the ara records, this photograph of the provincial kitchen. these happen to be all-girls. this is out along one of the
10:48 am 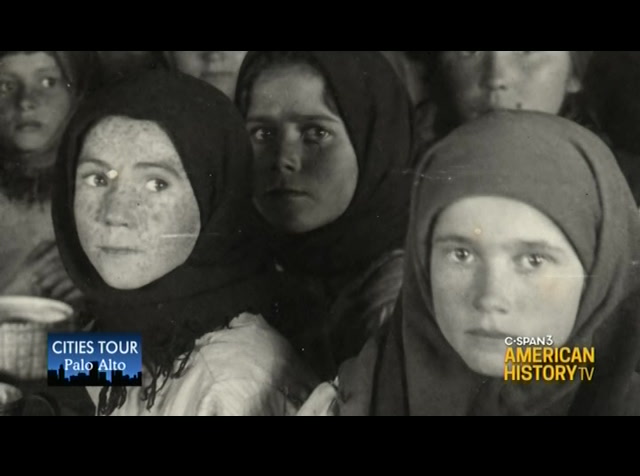 volga towns. photo.ces in this this was the kind of photograph herbert hoover wanted to publicize across the united states. by late spring of 1922, the seed has arrived and the food is beginning to arrive. american corn is arriving in large quantities. the skeletal figures, the piles of corpses, those are the horrible early days. those are gone. i was surprised to find as the american relief workers were surprised to find that in the towns, the cities and towns, there were camels that were doing duty as beasts of burden. it was the site of camel caravan taking off from various cities and heading into the provinces,
10:49 am 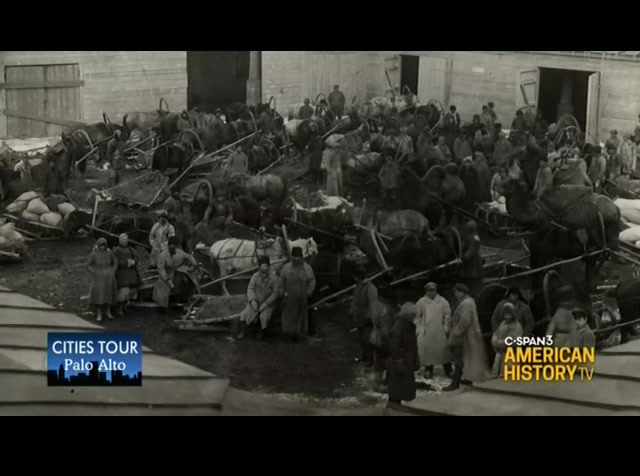 into the interior, that became, for the americans and for me as well, symbol of the relief mission. improvised, there is a heroic exoticon, and also very and that is what the americans felt about it. provides a book window into soviet society at the time that really gets across the point. but the bolsheviks were true believers in their communist ideology. reading these accounts of these americans tells you they were dealing with, and i'm using the word in a neutral fashion, fanatics. these were fanatical marxists-leninists. they believed in the coming utopia. they believed capitalism was doomed.
10:50 am 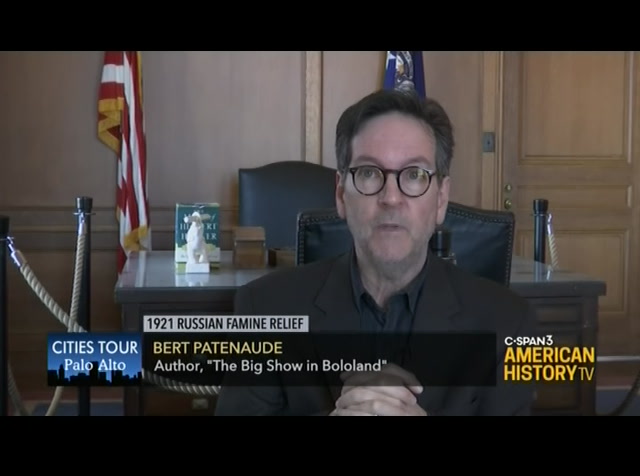 they felt they could lord it over these americans even though there was poverty and want all around. history is on our side. so there is that dimension of this story. two, herbert hoover really did hope that by bringing food into soviet russia, he could help overturn the soviet government. by the end of the mission, it is pretty clear that hoover is disappointed. for me one of the surprises is that the chief americans on the ground, hoover did not go to soviet russia during this mission. he was in washington at the time , but the chief americans who were administering relief actually wanted the united states to grant soviet russia official diplomatic relations. u.s. soviet relations.
10:51 am 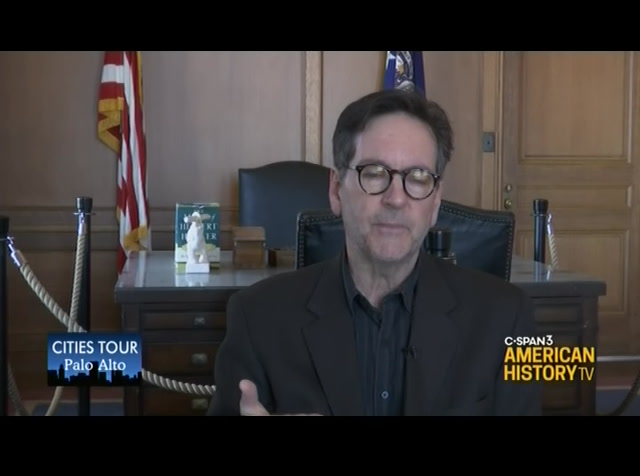 hoover was against this. officially you are soviet relations would not be introduced until hoover left white house. franklin delano roosevelt would introduce that. the americans who were saying this had seen bolshevism up close. they were not friends of lenin. their idea was if you want to undermine the bolshevik government, kill it with kindness. engagement is what we would call this in later days. here is the third unpleasant surprise. the americans leave. those russians, particularly those that work with americans suspect.offices, were they were vulnerable. the american protectors were leaving and they were seen as having sided with the americans against the soviets in the great terror of the 1930's and the were -- thatthey
10:52 am 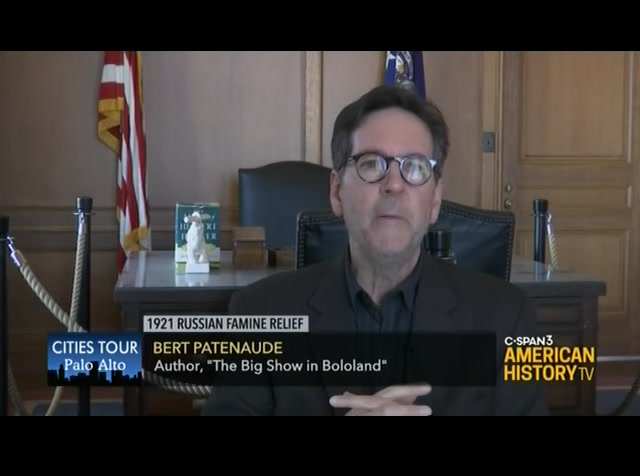 we documented, several victims of the terror who had worked for ara in russia, this was used against them in their trial. they must be spies of some kind. they must have engaged in some kind of espionage. on the soviet side, while they initially celebrated the american relief and tried to be nice about it, try to be civil as long as the americans were there, within a few years you can see the soviets history history and gets completed under stoll and in the 1930's -- under stalin. in a 1930's. it was not humanitarianism, it was espionage under the cloak of humanitarianism. these were spies.
10:53 am 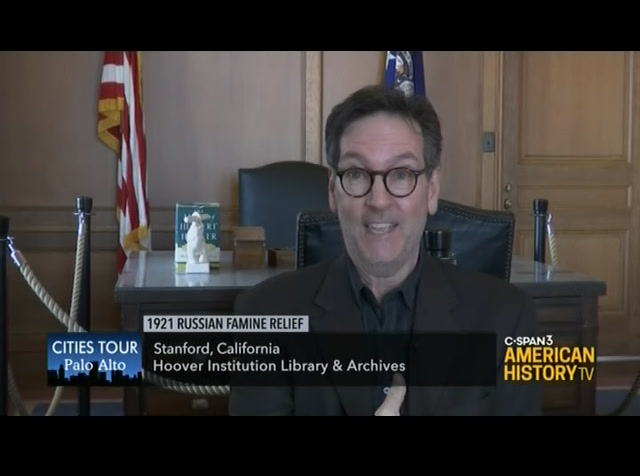 the types of records i told you i studied in the hoover is in part that record-keeping that lends credibility to the charge that this was some kind of espionage or testing the ground for american business down the road. 1950's,but the 1940's, the episode is forgotten. history ining soviet the 1970's for the first time and i'm reading soviet history books you would never see the ara, you would never see the hoover relief mission. it is not there. that is one factor on the soviet side. on the american side, it is because of herbert hoover's disgrace. the failing reputation after the great depression. and after he leaves office that his work as the great humanitarian becomes obscured by the great depression. americans don't want to hear
10:54 am 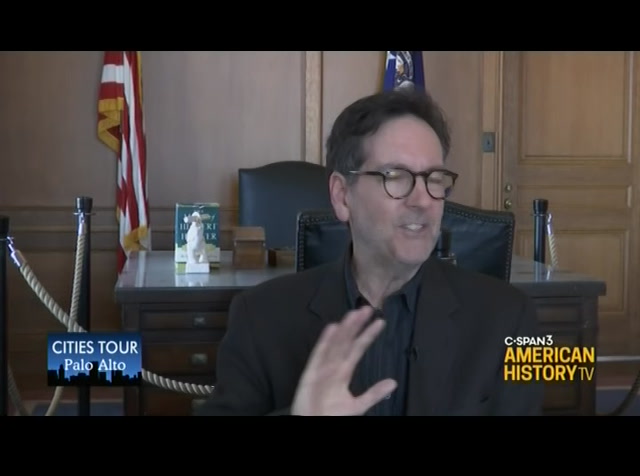 about it anymore. say, by the 1950's and 1960's, people can barely remember this. if you brought up herbert hoover it was an awkward topic because he was the great depression guy. this story was in the archives waiting to be brought out and brought to life in a book, and a film, that was my mission. >> our cities staff toured to palo alto. to learn about its rich history. watch more video from palo alto and other stops on the tour, visit c-span.org/citiestour. you are watching american history tv all weekend, every weekend on c-span3. next, cassandra newby-alexander
10:55 am 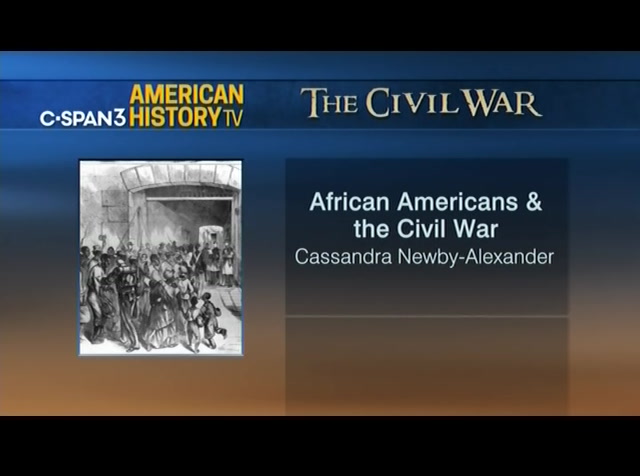 talks about her book "standing on the precipice of change: virginia's african american fighters in the civil war." she explains the term "contraband," often used for slaves who escape the protection of the union army and explains the importance of fort monroe in virginia to the contraband story. this talk was part of the american civil war museum's annual symposium at the library of virginia and cohosted by the university of virginia center for civil war history.
left
right
disc Borrow a DVD of this show DVD
tv

Author Bertrand Patenaude shared the story of a US famine relief mission to Bolshevik Russia in 1921 that saved millions of lives in his book, "The Big Show in Bololand: The American Relief Expedition to Soviet Russia in the Famine of 1921."