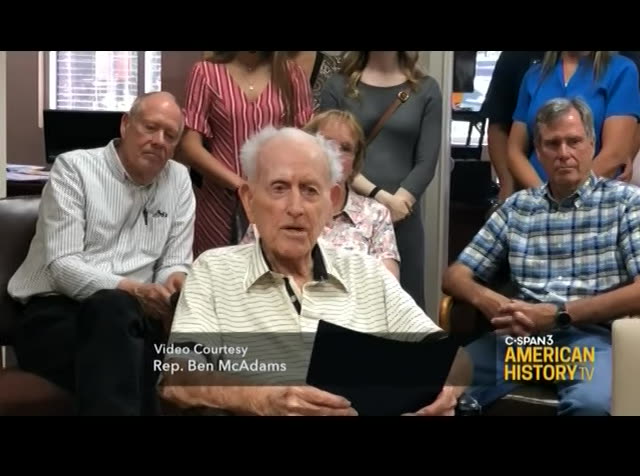 and so, if one mother or one new bride was spared putting a gold star in their front window, we were successful. leeann state professor reflects on the 100th anniversary of women's suffrage and talks about the tactics women used to get the 19th amendment passed in ratified. this interview was recorded at the meeting in philadelphia. >> wended women begin the public campaign for the vote in america? and what? was it that triggered of the movement? >> an interesting question. the traditional date we look at is 1848, the seneca falls convention for women's rights. in truth, it started a little bit earlier than that with women who were interested in the abolitionist movement that were excluded from inventions in london and elsewhere deciding
9:44 pm 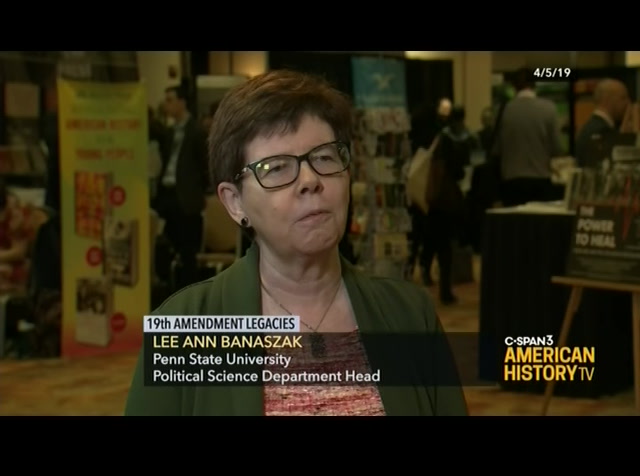 that they also thought it was important for women to talk about their own rights. , the question of the right to vote in 1848 was probably of the many items on the agenda was the most controversial. it was a very close vote. people were women at the focused onwere more other aspects of women's rights at the time but that really is the date that we highlight as the start of the women's movement. >> what is happening in other countries at this time? start i would say it is important to note that women in new jersey voted from 1776 until about 1807. women in at least part of the united states had a right to vote. it was taken away as the constitution was revised. in point of fact, the first country to give women the right
9:45 pm 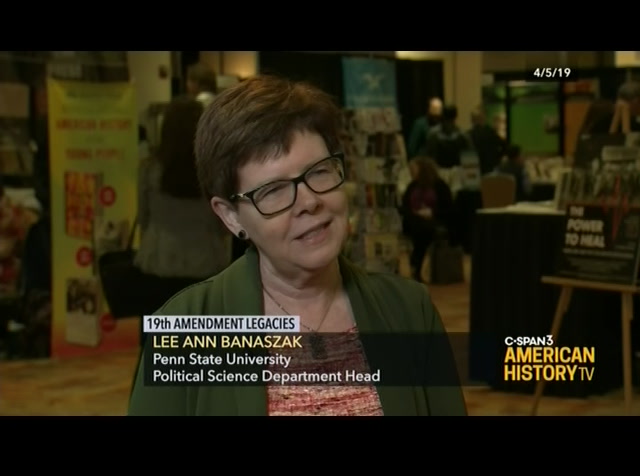 used. probably the most important to mention though is the use of the segregation of african-american women from the suffrage movement and ignoring american -- of african-americans women's rights to vote. was important to convincing congress to pass the 19th amendment. but what it did mean was that when the 19th amendment to the past, it only enfranchised a portion of women. not all women. if we speak about the 100 years, we have to take a realistic look at what the 19th amendment did and did not do. was to usetactics racism as a tactic in terms of getting the right to vote. there were other tactics also that were important.
9:47 pm 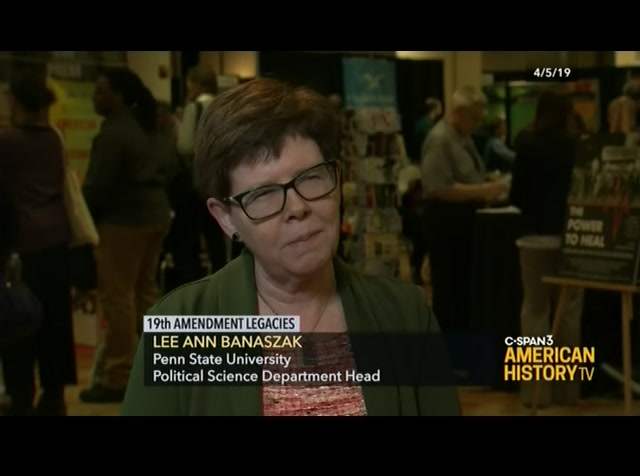 one of the interesting things from my perspective is that women were some of the first groups to lobby effectively and efficiently congress in a way that we think about lobbying today. so that the national women's extensive cardry catalog of every member of recorded who they were, what their interests were, when they were visited. they were visited regularly by a constituent. they would be lobbied extensively. whenever a vote came up, they would go to the card catalog and revisit every congressperson that was important to the vote. and then the last tactic that is worth talking about is the use of making sure that you publicize the importance of women getting the vote. and that really happened in a series of suffrage parades, ticketing -- picketing the white
9:48 pm 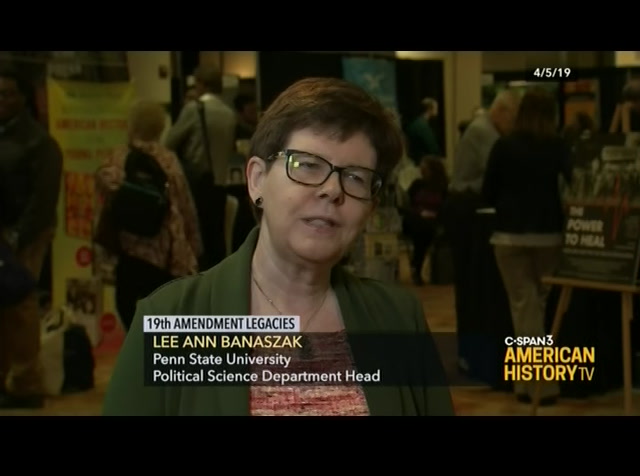 house. these sorts of tactics that we used for todaya -- 1913 suffrage parade. it occurred around the inauguration of the woodrow wilson. day before ase woodrow was arriving in washington, d.c. in point of fact, it was such a also suffrage parade and there was a lot of violence by bystanders. that overshadowed woodrow wilson's inauguration. interaction between the women marching and the parade goers is what makes headlines. does it help their cause? >> certainly alice paul, the head of the national women's party, she thought it did. what it certainly does is raise in the consciousness of all
9:49 pm 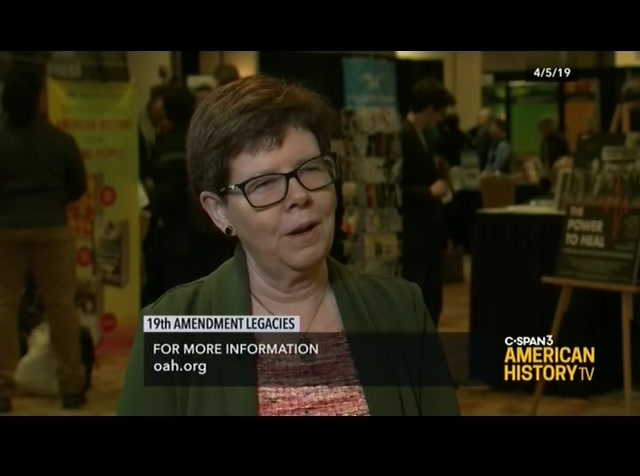 citizens the fact that this is a concern an issue of women. thether aspect of it was -- certainly the violence that occurred in the parade made people think about women and the protections they needed. that violence could happen to a set of women walking peacefully through the streets. that really raised consciousness in an important way. >> you mentioned picketing outside of the white house. , theyrest of these women were held in prison, and some decide to do a hunger strike. and then they are force fed. what do you think the impact of learning about that was on the american conscious? brought thenly
9:50 pm 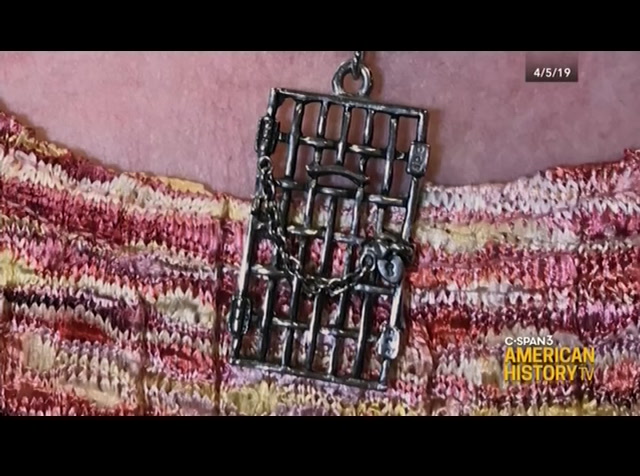 public to a position of opposition against not only the local leaders who had arrested women but also put pressure on woodrow wilson in terms of supporting the right to vote. the necklace i'm wearing today is actually a commemoration of that. prison,en came out of aey were given something with piece of the jail door on it. to remind them. >> who came up with the idea of the pen? -- the pin? >> the national women's party. that was their way of commemorating it as the women came out. >> what were the expectations once the 19th amendment was passed and ratified, what were the expectations of these female voters? >> there were a lot of debates.
9:51 pm 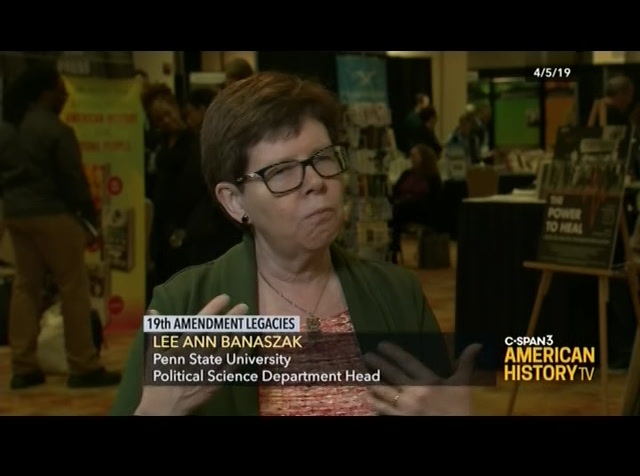 the first question was what they even bother to register and turn out to vote? certainly, there were people that argued they would be uninformed voters and they would not be interested in politics. that they would simply follow their husbands in terms of voting. on the other hand, in 1920 -- others noted a real interest in women voting so the st. paul newspaper for example in 1920 wrote a whole article about how women were going to register to vote and how important that was. the second question was how they would vote. what would they do when they walked into the voting booth. there was an expectation or one they would follow the progressive movement. there were prominent women addams, lauren
9:52 pm

kelly, they were part of that movement. they supported a lot of progressive causes. political parties were hoping to incorporate women and women would vote the same way their husbands did. early on, they organized women's divisions and try to bring women into the party. >> and what was the outcome? >> it is hard to say because we do not know what women did in the voting booth. we had the secret ballot. there have been some political scientists who have tried to estimate what the women's vote was based on a statistical analysis. they have uncovered is really not much different from men in the early elections. women were not the progressive voters that many politicians thought they would be but they did vote with a regular party.
9:53 pm 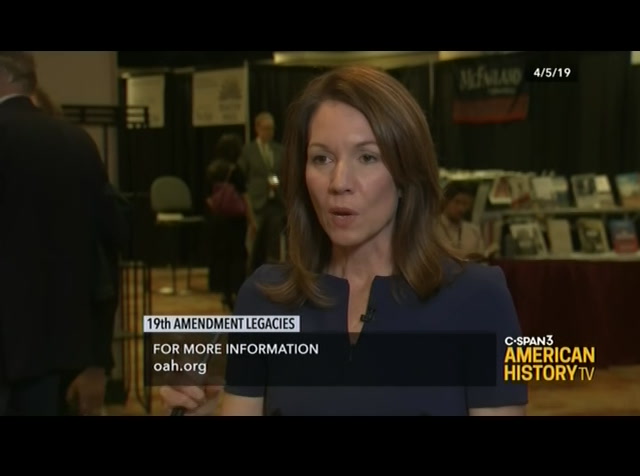 >> when could women go from being voters to participating in politics? and then running for office themselves? would argue women were participating in politics from the very beginning but not necessarily in the electoral politics that we think of. women ran for office really early. forabeth caddy staton ran office. she only got 12 votes. the first woman to run for president was victoria woodhall four years later in 1870 two. women candidates were there from the very beginning. what you do see is that the number of women in clinical office rose very slowly after the 19th amendment. if we look at just where women served in state legislatures or where they served in congress,
9:54 pm 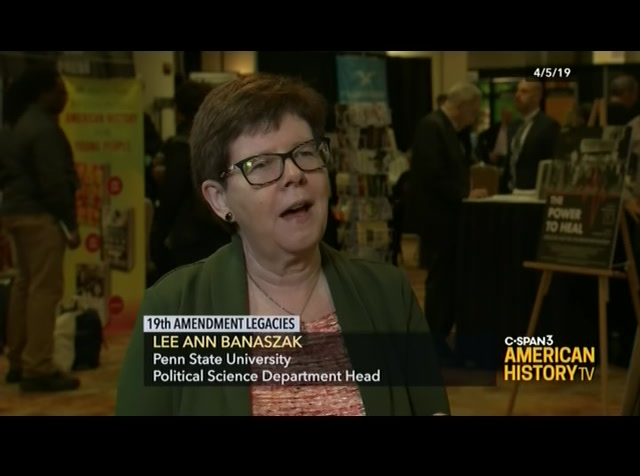 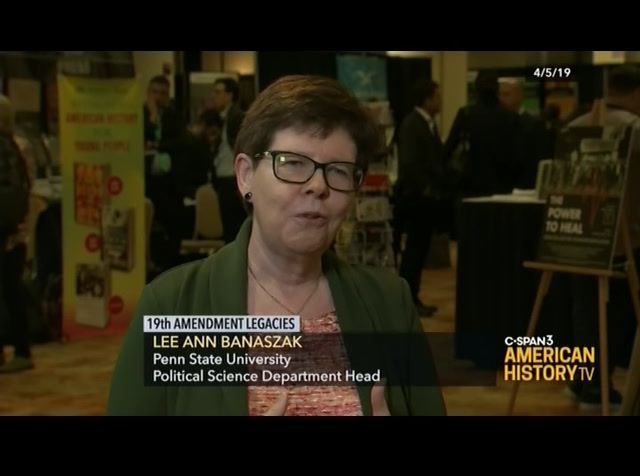 representation at the national or local level. of women'sh in terms representation. you think the legacy of the 19th amendment is for different ethnic groups? who were the leaders for women's rights in those different groups? >> one legacy of the 19th amendment for african-american women and for latino women was that they still had to fight for the right to vote. senses, you see white women saying -- we are done. we have the vote. now, we will focus on other issues. but for african-american women, that was not true. 19 30's, 1940's, 1950's, african-american women are still fighting for the right to vote. and many had been act of in the
9:56 pm 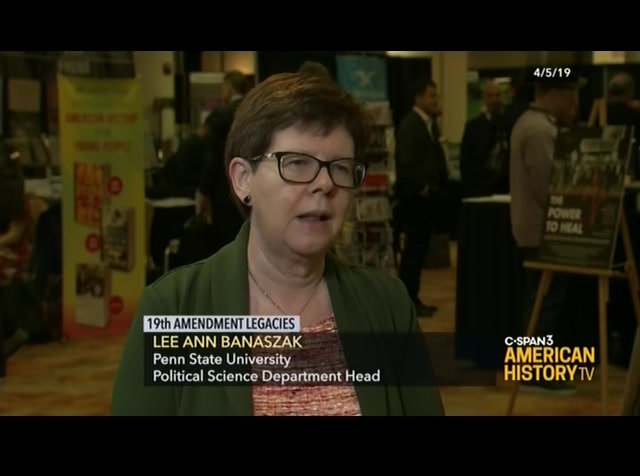 suffrage movement. ida b well. i was talking to a colleague before i come -- before i came here about local women in pennsylvania. is of the interesting things we focus on those we know the best but there were a lot of women all over the country fighting for the right to vote. daisytsburgh, there was elizabeth adams lampkin who in equal --ed the all around the country there are stories like that of women who in ourt been recognized history books because they have part of thenot traditional story we tell or who were fighting at the local
9:57 pm 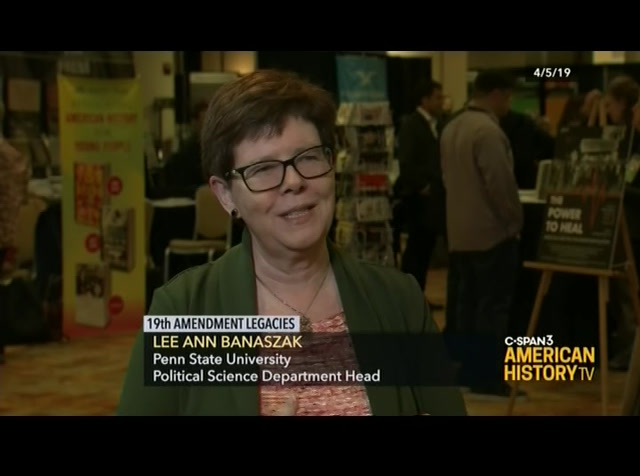 level. thisf the things i hope is 100th anniversary will allow us intolebrate them and take those who were a part of the movement wherever they lived. there were -- there are many opportunities as the celebration occurs for groups to explore their own history and to see those women who may not have been written into the history books but were nonetheless really important in the right to vote. lastingdo you think the legacy of the 19th amendment is? >> there are a lot. i certainly think we need to recognize that much of our politics today feeds back to the way the suffrage movement worked and the battles that were fought then. and i do think, for example, the
9:58 pm 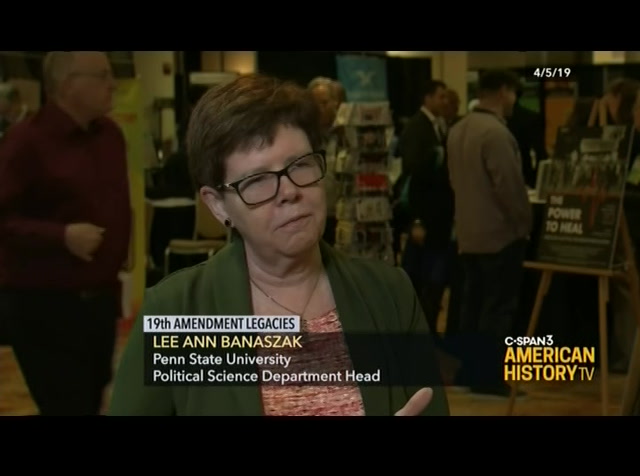 importance of race continually in our politics and the way it plays out in the current women's , looks back to that legacy of what happened in the suffrage movement. that is the one i would stick with. thinking back on your research of these women, what do you think their reaction would women thatmount of ran and won in the 2018 election cycle, having a female speaker of the house for the second time , and right now as we talk, four women running for president? >> on the one hand, i think they would say -- this is what we fought so hard for. with a word of caution.
9:59 pm 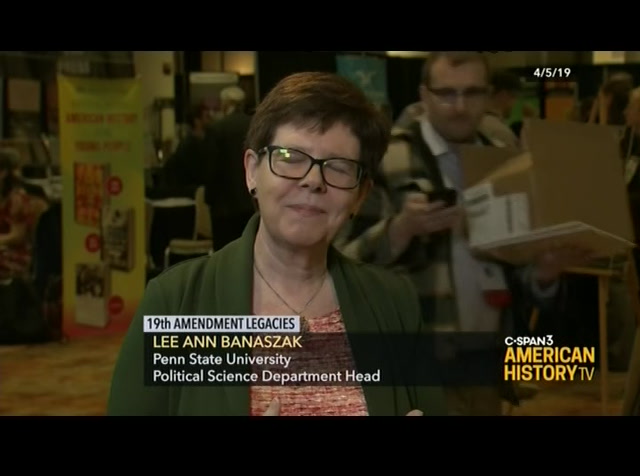 -- thers is a long time bottle of suffrage was 70 years. and to know that even at this point, women are still underrepresented in those venues. that would be a note of caution. >> thank you. >> my pleasure. american history tv products are now available at the new season and online store. .org to seen store what is new for american history tv and check out all of the c-span products. >> you are watching american history tv. weekend, beginning saturday at 8:00 a.m. eastern, we bring you 48 hours of unique program exploring our nations hast -- nations past.
10:00 pm

american history tv is only on c-span3. much like the high desert of the united states. it is different but very pretty out here. >> hi, i am corinne porter, i am a curator at the national archives museum. i'm going to show you around the exhibition today. before we head into the gallery i want to talk about this lenticular out in the lobby. it has a photograph of the 1913 women's suffrage march, looking up pennsylvania avenue toward the united states capital. it is overlaid with a photograph from the 2017 women's march from pennsylvania avenue as well.
left
right
email Borrow Program
tv

Penn State professor Lee Ann Banaszak reflected on the 100th anniversary of women's suffrage and talks about the tactics women used to get the 19th amendment passed and ratified. This interview was recorded at the Organization of American Historians annual meeting in Philadelphia.