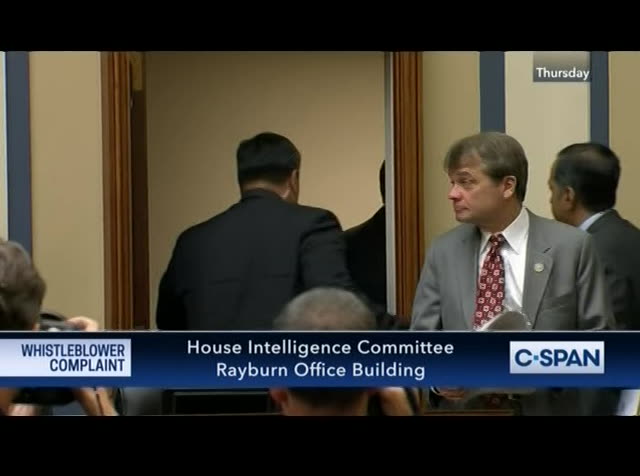 announcer 1: immediately after the hearing, president trump reacted to testimony from the acting on the was a blower complaint. -- the whistleblower complaint. [airplane engine noise] pres. trump: hello, everybody. i just watched a little bit of this on television. it's a disgrace to our country. it's another witch hunt.
2:20 pm 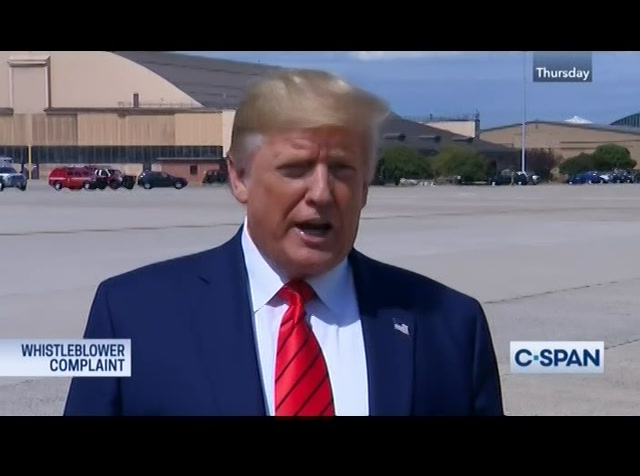 here we go again. it's adam schiff and his crew making up stories and sitting there like pious whatever you want to call them. it's just a really, it's a disgrace. it's a terrible thing for our country. they can't do any work. they're frozen, the democrats. they're going to lose the election. they know it. that's why they're doing it. and it should never be allowed, what's happened to this president. and despite that, i think i've done just about more than any president in his first two and a half years in office. if you look, i think you'll see very few could compete with the things we've done for our military, for the economy. we have the best economy anywhere in the world, by far. we've rebuilt our military. we've done so many things that are so incredible with tax cuts and regulations. and i have to put up with adam schiff on a per -- on an absolutely perfect phone call to the new president of ukraine. that was a perfect call. but adam schiff doesn't talk about joe biden and his son walking away with millions of
2:21 pm 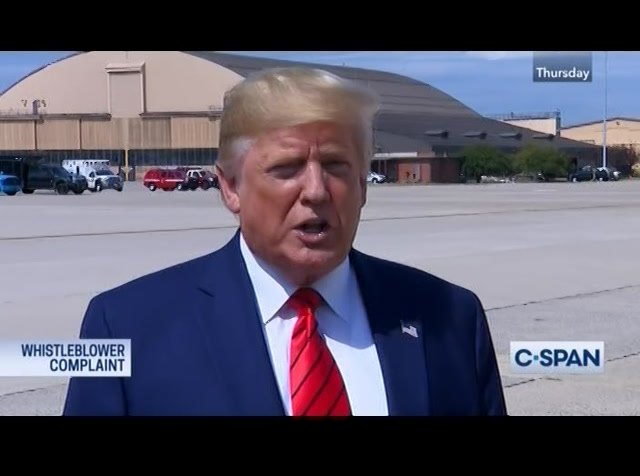 dollars from ukraine, and then millions of dollars from china. walking away, in a quick meeting, walking away with millions of dollars. he doesn't talk about joe biden firing a prosecutor, and if that prosecutor is not fired, he's not going to give him money from the united states of america. they don't talk about that. my call was perfect. the president, yesterday, of ukraine said there was no pressure put on him whatsoever. none whatsoever. and he said it loud and clear for the press. what these guys are doing, democrats, are doing to this country is a disgrace and it shouldn't be allowed. there should be a way of stopping it maybe legally, through the courts. but they're going to tie up our country. we can't talk about gun regulation. we can't talk about anything because, frankly, they're so tied up. they're so screwed up, nothing gets done except for when i do it. i'm using mexico to protect our
2:22 pm 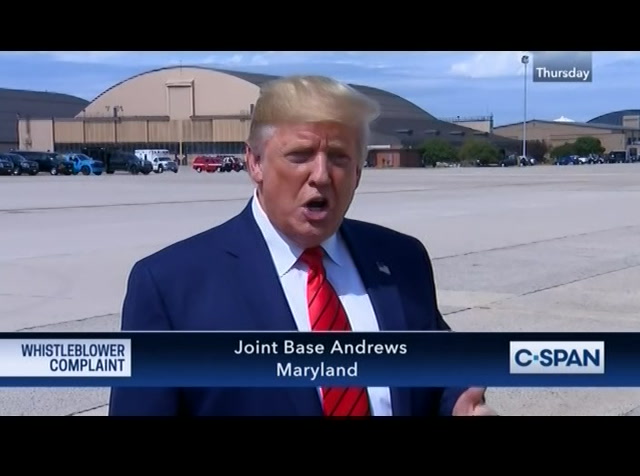 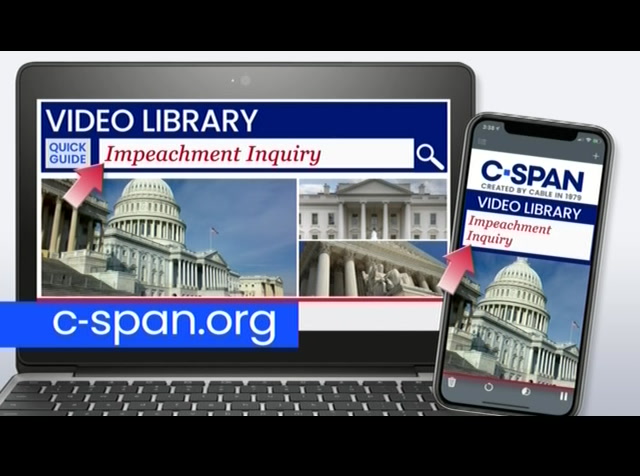 impeachment inquiry at c-span.org. type in impeachment inquiry. for hearings, briefings, events and more. the programs are also available on our radio app. the role of rudy giuliani and president trump's efforts to have ukraine investigate joe biden's son dominated sunday news shows. in a call revealed by a whistleblower complaint, president trump told ukraine's president that mr. giuliani, the president's personal lawyer, could help investigate joe biden's son. rudy giuliani was asked by a tv show if he would help investigate. we will hear from the chair of that committee and get congressional and administration reaction. i would not cooperate with adam schiff. i think adam schiff should be
2:24 pm 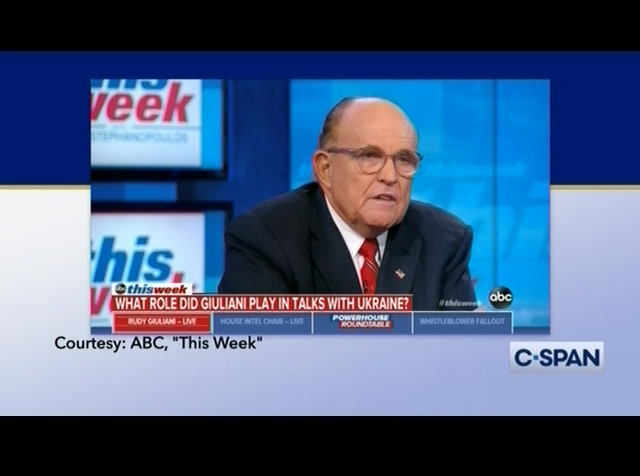 removed. they prejudge the case, put someone in who hasn't expressed an opinion yet, so i had a judge in the case and he already announced i am going to impeach, then went ahead and did a whole false episode, would i recuse -- i said i will consider it. [speaking simultaneously] >> you said you would not do it. mr. giuliani: i said i will consider it. i am a lawyer. it is his privilege, not mine. if he decides he wants me to testify, of course i will. i think adam schiff is an illegitimate chairman. he has prejudged the case. if you want fairness, you got to put somebody in charge of that committee who has an open mind, not someone who wants to hang the president and says i have evidence of russian collusion. adam, where is the evidence? [speaking simultaneously] >> i give you plenty of chances
2:25 pm 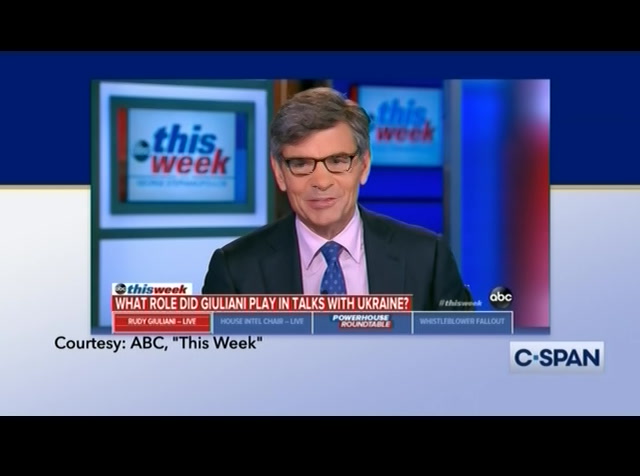 to -- mr. giuliani: let's see how the interview goes. >> you seem to think i am the judge and jury here. my role is to do the investigation and make sure the facts come out. if it were to lead to an impeachment, and i don't want to get ahead of ourselves, it will be the senate that will determine whether the president's conduct should remove him from office. i intend to do a thorough investigation. ngat we have seen is damni because we have seen a president of united states use the full weight of his office with a country beholden to america for its defense as russian troops occupy a part of its land and the president used that to course the leader to manufacture dirt on his opponent and interfere in our election. it is hard to imagine a series of facts more damming than that. we will get to the bottom of it.
2:26 pm 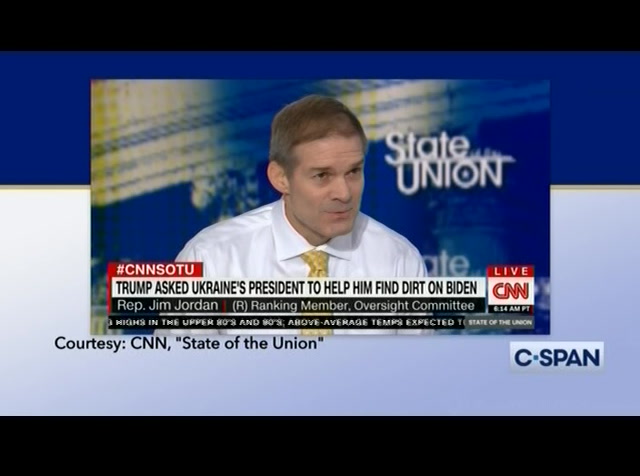 >> if democrats want to impeach because rudy giuliani talked to ukrainians, good luck. i don't think the american people think that is the right course. they see it is one of the many and unending attacks democrats have leveled against this president. the democrats put us through three years of this phony collusion investigation and now they come back with this? we have all seen the transcript. there is nothing there. i agree with my colleagues. >> the president of the united states is the whistleblower. this individual is a sen. teur.r: -- a sabo credible but you don't need it because you have it because you have a transcript of a conversation in which the president tried to convince a foreign leader to interfere in the 2020 election and you had rudy giuliani on tv every morning and every night
2:27 pm 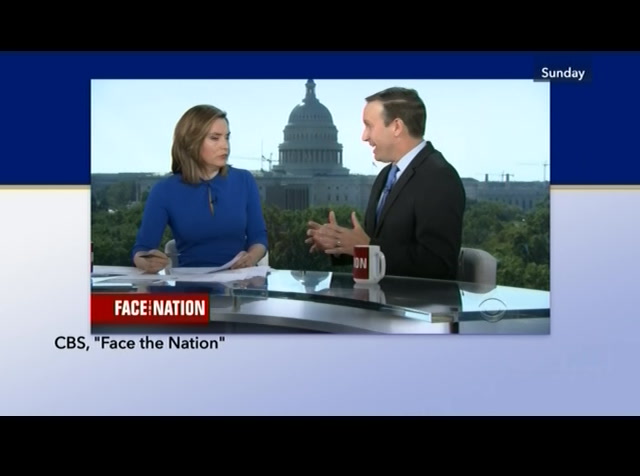 admitting as an agent of the president's campaign he was coordinating with the state department to perpetuate the president's political agenda. this will not allow him in democracy and it is frightening republicans are standing up and defending the president. if he gets away with this, what is to stop him from integrating the entirety of foreign policy, the state department, into his reelection campaign? >> removal of a president is a serious deal but the removal of a president in a democracy, the biggest in the world, is a weighty matter and we hope everyone can sift through the evidence and be careful. i have seen a rush to judgment it is a badat said day and week for this president and country if he is asking for political dirt on an opponent. it looks like the other matter that is far from proven is
2:28 pm 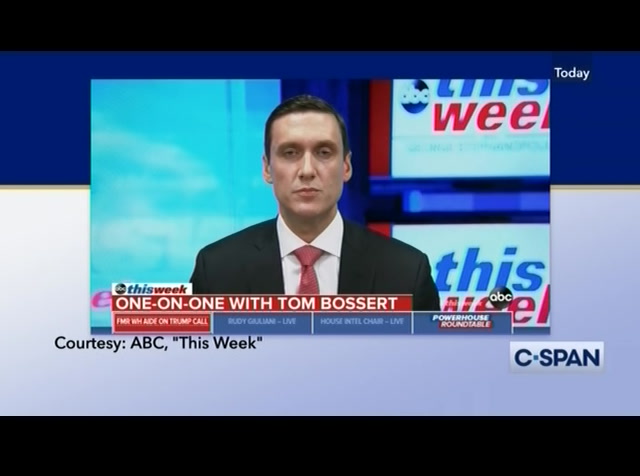 whether he was doing anything to abuse his power and withhold aid to solicit such a thing. that seems to be far from proven and it will be the focus of our congress to the next year. announcer 1: representative mark pocan, talking about democratic steps to impeach president trump. here is what he had to say on "newsmakers." >> only get to articles of impeachment, would you like to focus on the ukraine allegations that came out this week or be broader in scope to include emoluments, his taxes, aspects of the mueller report? >> i think we want to get this done in an expeditious manner and that means i think taking the bombshell allegations and really confession by the president this week to what happened in dealing with this monthly. i think it will be the focus. we have had adam schiff and jerry nadler in the caucus
2:29 pm 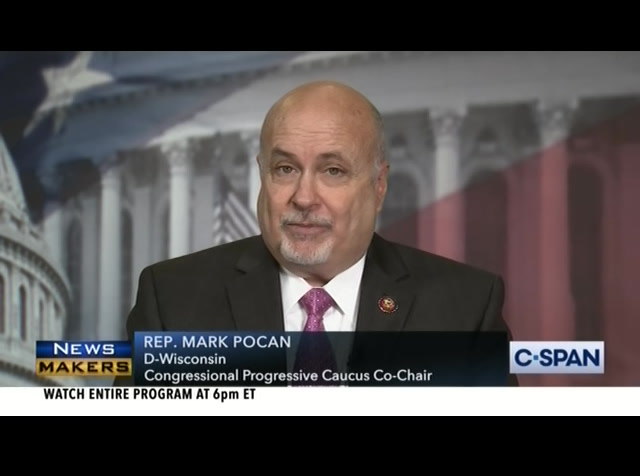 meeting yesterday, great conversation about next steps and you will see the intelligence committee do his work with what has happened this week, the president asking and other torrent -- governments to get dirt on his opponent. the fact he withheld money from a country days prior, that wegress had approved, and have seen the whistleblower report, there has been a cover-up in the white house, it is serious allegations and that alone is what people are focused on. we want to deal with this as quickly as possible. >> how long will this process take? >> i don't care about the amount of time it takes, but it is important it is the room enough. if the white house does what they did throughout the mueller report, blocking witnesses, we will move ahead. we want play games. we won't let them continue to stonewall getting information to stonewall in getting information to us.
2:30 pm 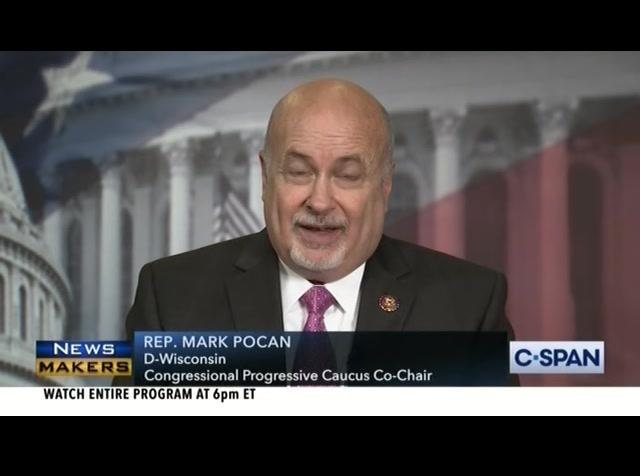 we have a smoking gun and that smoking gun is called donald trump. and we already have him saying he did the call, we have the notes from the call that very clearly show he did something illegal. and i think now it is a matter of getting those key witnesses in, and whatever time that takes is what it takes. announcer: congressman kopan talks about the democratic leadership in younger members. 2020 politics, and u.s.-mexico border issues. newsmakers today at 6:00 p.m. eastern on c-span. tonight on q&a, as the house launches a formal impeachment inquiry into president trump, hear from james banner, editor of the book "presidential misconduct." in one of the historians who worked on the report commissioned by the house judiciary committee back in 1974 on the impeachment inquiry into president richard nixon. >> john doerr who had been appointed the general counsel of
2:31 pm 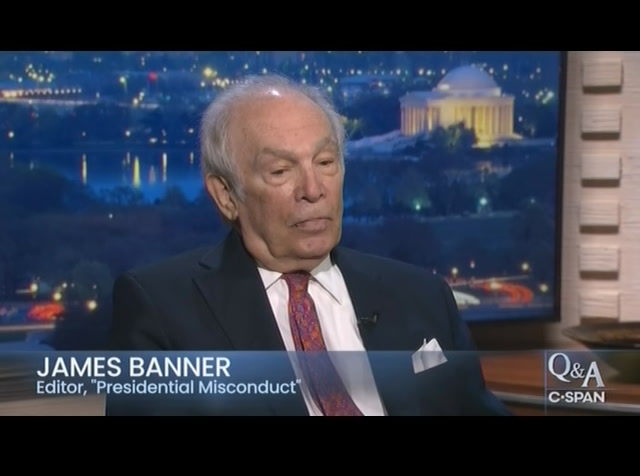 the house impeachment inquiry, thought of the utility of a report like this and turned to his friend, member of the l faculty, and asked woodward to be the kind of commander-in-chief of a project of preparing such a report, which was unprecedented as he said. in the introduction to the original volume. >> 1974. >> he has three people to be his field generals and identify and recruit about 12 historians to write a one, two, or three sketches of that many presidencies. and i was chosen to be one. we had eight weeks to do it. it was a day before facts, before email, due to seshan. it was done by telephone and mail. we managed to do in in eight weeks and we submitted it to john doerr, and that is the last we heard of it. six weeks later, the president resigned. announcer: watch tonight at 8:00
2:32 pm 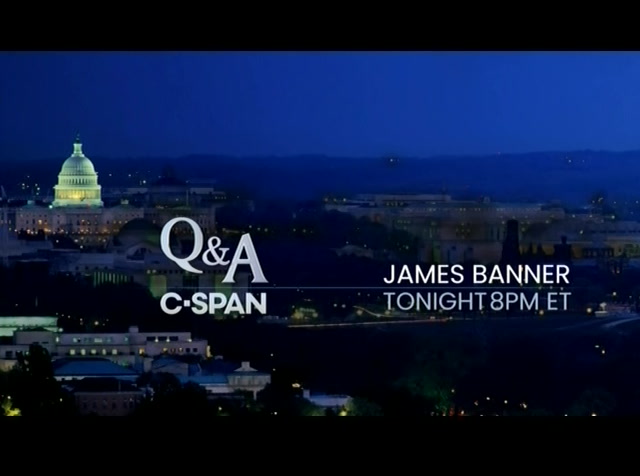 eastern on c-span's q&a. morning, a form on the whistleblower complaint against president trump and the impeachment inquiry. watch live from the brookings institution at 10:00 eastern. 16-year-old swedish activist greta thunberg delivered remarks at the opening of the climate summit at the united nations. she chastised world leaders saying they had failed the world's young people by not acting fast enough to address climate change. greta: my message is that we'll be watching you. [applause] greta: this is all wrong. i shouldn't be up here.
left
right
disc Borrow a DVD of this show DVD
tv

President Trump reacted to the DNA Director Testimony on the Whistleblower complaint.