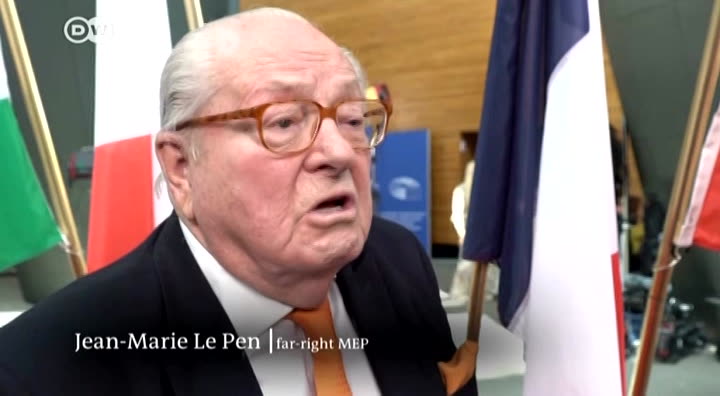 rio tinto supports patriots with views close to his of course he's defending his country then 8. we set out on a tour of several european cities together daughter bella and its french partner station france $24.00 investigated russian influence on europe's far right. the russian embassy in berlin which dominated the then socialist east germany more than 30 years ago. and how much influence does the kremlin try to wield behind the scenes today germany's bundestag regards the right wing populist party alternative for germany the a.f.d. as especially open to russia its lead candidate for the upcoming european elections
8:46 am 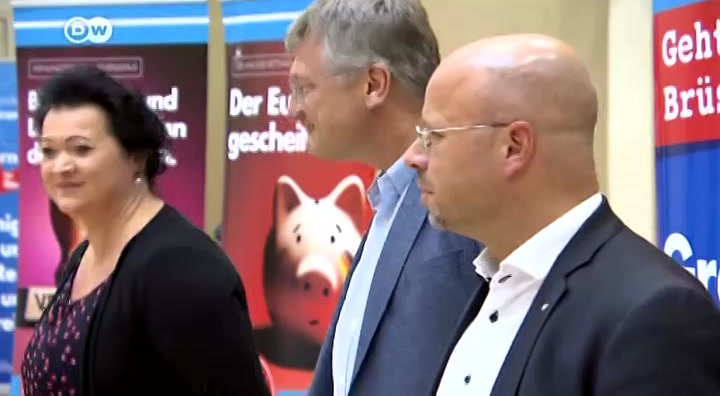 is york morton. we see good neighborly relations with russia and with the united states we want a thoroughly pragmatic approach i don't represent russian interests or american interests i'm a german politician representing german interests and it's in our german and european interests to maintain good and open relations with russia and with other nations to understand. and yet one particular a.f.d. representative has been cultivating more than good relations with russia markets. and he's been reaping scorn from other parliamentarians. marcus phone my own has long presented himself as a friend of moscow whenever possible with his close confidant manuel ox and vita many photos of the 2 friends can be found on the internet. box and vita is known as
8:47 am 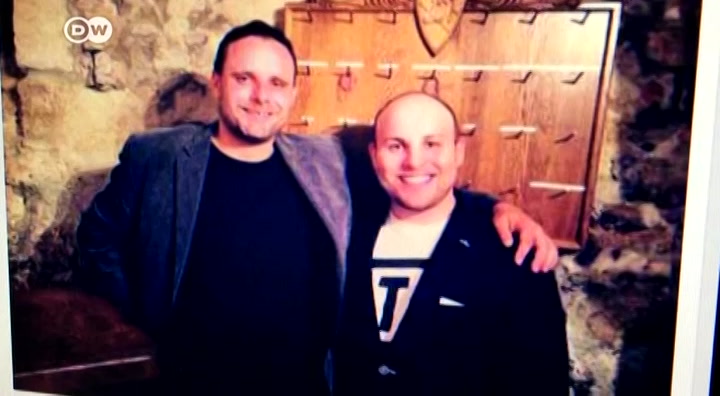 a right wing populist who aggressively seeks closer relations with moscow even more so now since the ukraine conflict he often gives interviews to russian nationalist media we need to plan for the future and i hope that we start with planning that we can leave nato in 5 to 10 years when hostilities commenced in eastern ukraine oxon vitae was seen in the company of the separatists leaning toward russian president putin he started himself an election observer posing for photos with other foreigners such as a group of french fighters. the conflict in ukraine caused a rift between moscow and the european union it began with russia's annexation of crimea in march 24th teen and deepened when moscow was found to be arming the separatists in eastern ukraine. this proved to be
8:48 am 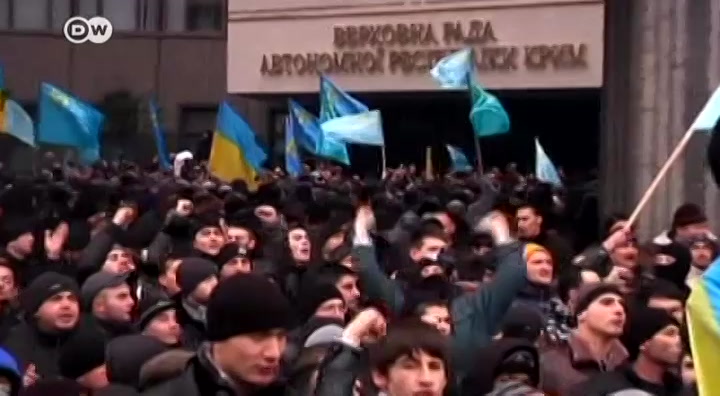 a geopolitical turning point. for the philippines and because i've seen especially trained they mobilized or they made relations between the european far right and moscow more active after the start of the russian and. russia will sanction and as a response to the same russia would try to interfere in the elections. even at that time putin was establishing contact with the head of italy's far right leg a north party my tail so the me now in a high position in the italian government. 5 years later with the european election approaching salvini is promoting closer cooperation between the rightwing populous parties including germany's a.f.d. . and remember if we join salvini staffer le pen and others in one big group will have the political clout that a lone warrior doesn't have to form policy for confront. the f.t.
8:49 am 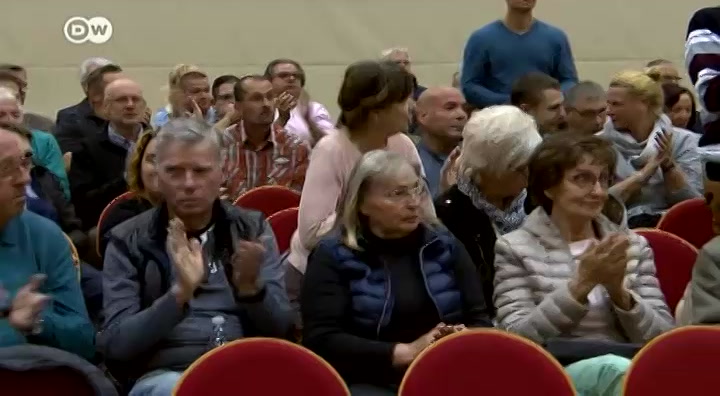 decided to take a pro russian stance falling in line with all other european right wing populist they rejected western sanctions against russia over its interference in the conflict in eastern ukraine and after 5 years of building alliances with europe's right wing extremists moscow scored a victory among the key operators were various shadowy figures such as manual oxen . in november 2014 he was photographed in eastern ukraine together with a frenchman victoria lanta an expert soldier posing with sympathizers from france. they all share right wing views and hatred for liberal democratic values far right organizations and passes. some of the few. political forces in europe that are still ready to cooperate with the kremlin the kremlin needs. in the west.
8:50 am 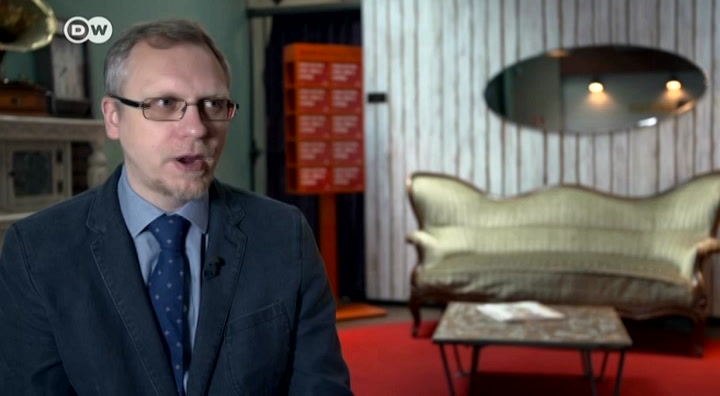 in 2018 france's yellow vests movement took their protests to the streets in the spring the former soldier and mercenary in eastern ukraine they turned up again he was a member of a self-appointed security team. where the marshals the prefecture asked for when it required every demonstration must have an internal security service the minister and you're also a yellow vest yes of course what's your goal this time is it going well. you're going to listen as i said we here because the prefecture call for a security service when the prevent any and all violence internally. we want to show the french people the prime minister and the government to divide doesn't come from us we would usually from a provocation by the police who. you are cannot.
8:51 am 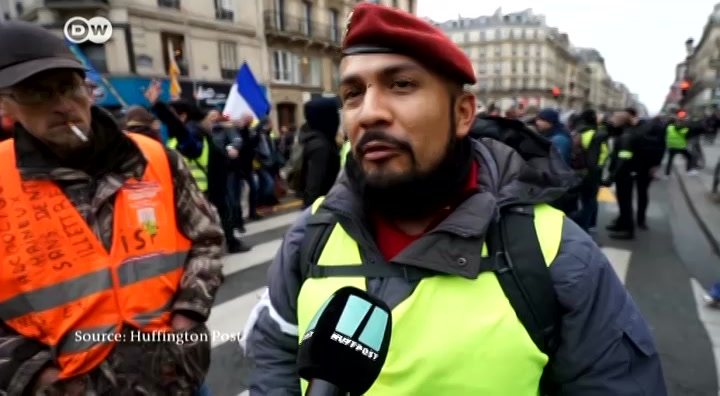 french right wing extremist they call enter transitioned from the war in eastern ukraine to the streets of paris. but in both cases as a hatchet man for putin's interests. here. publicly the russian president cultivate his relations with the heads of europe's far right groups like marine le pen of the national rally. you know so i know that you represent quite a fast growing element of european political forces. it's a very profitable contact the pen's party has taken out a total of 11000000 euros in loans from banks close to the kremlin as funding for recent presidential election campaigns and she maintains very high level contacts with moscow such as to any expert secretary of state for transport he has switched to the national rally and supports russia's annexation of crimea. region i've been
8:52 am 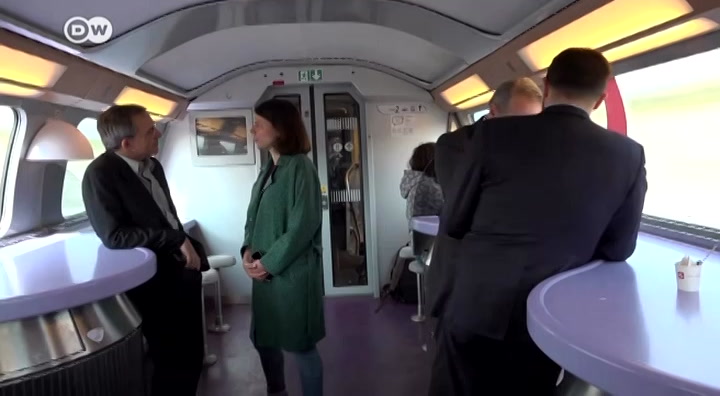 there more than 10 times so nobody can seriously doubt that the people there would rather live under russian control. thought it was now he's running for the e.u. parliament and takes a clear stance on russia. continuing the policy of sanctions punishes europe and our own farmers as much as russia but suicide. observers say russia seeks to expand its influence in europe by supporting right wing populist leaders as well as their extremist voter base. into the state the idea is to fan the flames constantly with gasoline and his people who already stirred up against each other well it's by remaining propaganda propaganda aimed at fracturing our society. in france the yellow vests protests against the populists room to maneuver almost
8:53 am 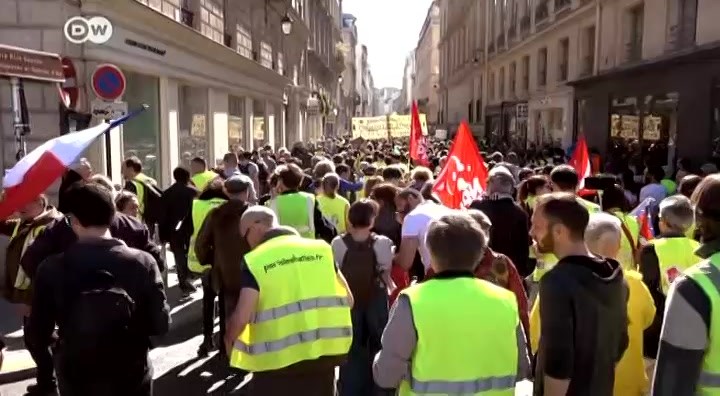 every weekend people take to the streets of france to demonstrate. a court proceeding in this southern polish city has thrown unexpected light on russia's suppose that methods of peddling its influence to europe's right wing base the defendant is michelle p. a right wing radical on trial for terrorism since early 2019. he's accused of having organized an arson attack in the neighboring ukraine. specifically in who's who thought western ukraine home of many ukrainian citizens from the hungary an ethnic minority on the night of february 4th 2018 a surveillance camera recorded 2 men trying to throw molotov cocktails at a building used by a hug area an association. they caused only minor damage. the defense attorney explains his client's motives. competition of the controlled
8:54 am 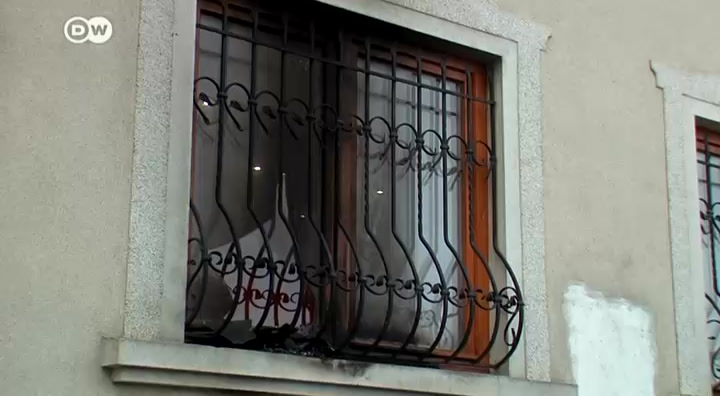 operation was planned to inflame ethnic tensions in the western ukraine in province . if you go on you're. talking turkey it was calculated to trigger hostility between the hungary and minority on one side and the ethnic ukrainians in the other part of the region pinching out of the bush typical and i suppose a couple of quid much of it coincides with moscow's long cherished hope that ukraine might be further destabilized by ethnic conflict and its western tip on the border with hungary. right at the start of the trial in krakow took an interesting turn. implicated a german as having incited him to perpetrate the attack. on the world and he has views in common with money they've taken part in conferences together. but. it was
8:55 am 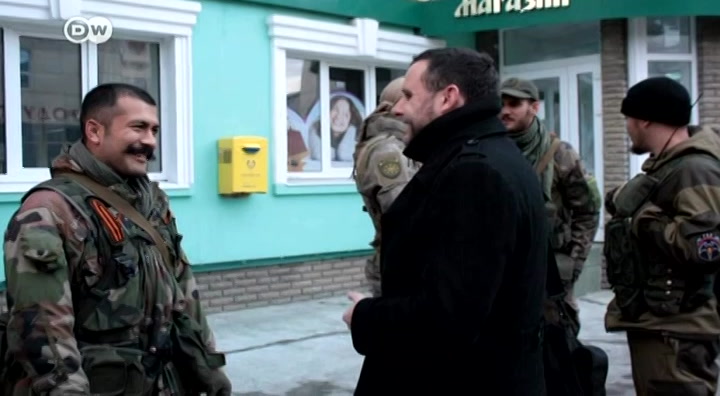 manual. the right wing journalist who had been supporting the separatists in eastern ukraine. another right wing extremist has been called as a witness in krakow are tossed back here he refused to give our camera team an interview. becky or might have some vital information. he knows both the defendant and. he's known them from the start of hostilities in the ukraine when they spoke out at a conference in support of putin leaving separatists for weeks after the 1st attempted attack in. another took place at the one garion cultural center and it was successful several ukrainians are accused of carrying it out but it's unclear who instigated it apparently it wasn't the same people who organized the 1st attempt. there is no one in russia a decision about interference which would take place there are people around the
8:56 am 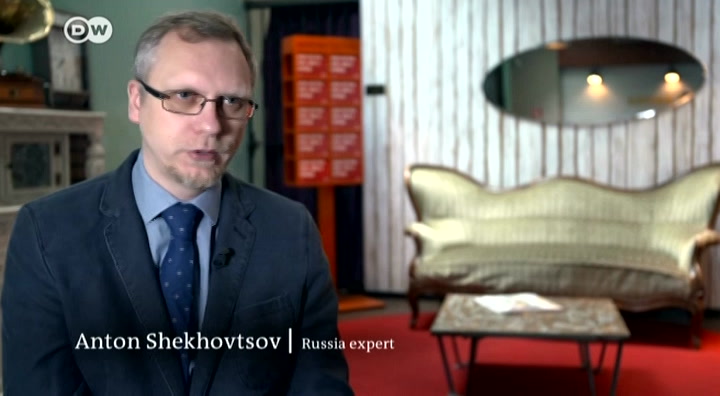 kremlin. think institutions. interest groups that want some reward from the kremlin. ember live within view of the brandenburg gate the soviet war memorial commemorates the red army troops who fell in the battles against nazi germany. in the aftermath of that war germany and europe were divided until the berlin wall came down. but the hopes for a peaceful coexistence in a united europe have yet to be realized. nearly 30 years later russia seems bent on dividing europe again but this time with the help of right wing extremists.
8:57 am 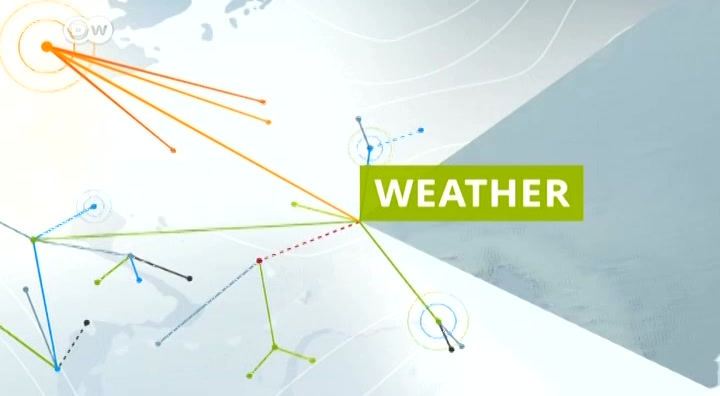 a mysterious disease has. spread. the ball bob g.'s of south africa. some of them are over 2000. is suddenly my cousin scientist. a south african research has set out to find the polls. tomorrow today. don't.
8:58 am 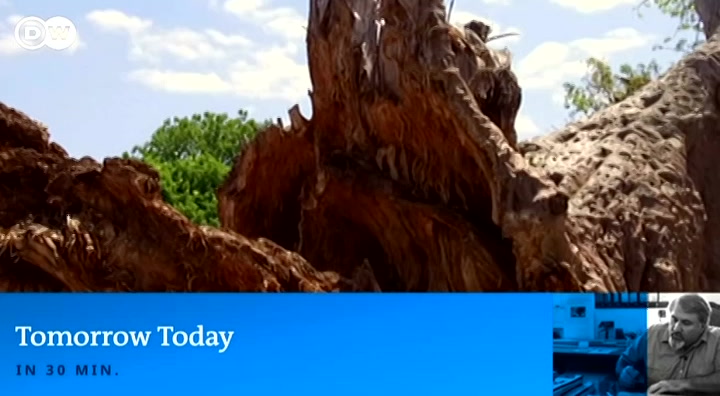 hijacking the news. where i come from the news is being hijacked journalism itself has become a scripted reality show it's not just good vs evil us forces them black and white. in countries like russia china church people are told it says nothing and if you're a journalist there and you try to get beyond that you are facing scare tactics intimidation. and i wonder is that where we're heading as well. my responsibility as a journalist is to get me on the smoke and mirrors it's not just about the fear and balance or being neutral it's about being truthful. i mean as for golf and i were getting up and.
8:59 am 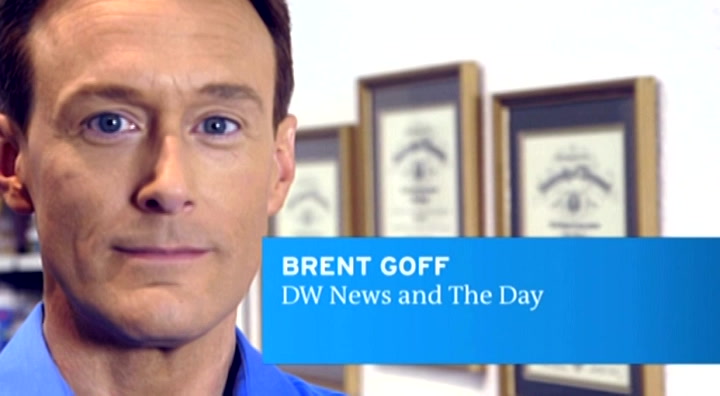 it could be green. very green. old as believed. to be yes. wind. watches from nothing. and definitely red. ball just yet if that's what you present. couple couples very special bunch of georgia choose your favorite come cheap.
9:00 am 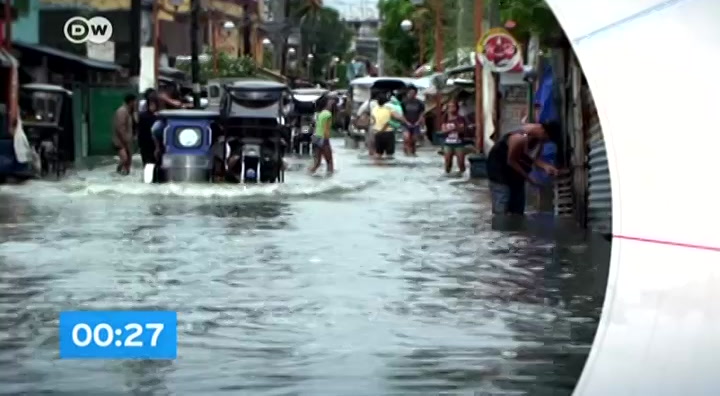 this is news coming to you live from berlin he played the president in a t.v. show now he's set to become president for real comedian of. is taking the oath of office to officially start his term as ukraine new leader he has no political experience so what's his plan for the country we'll go live to.
left
right
email Borrow Program
tv