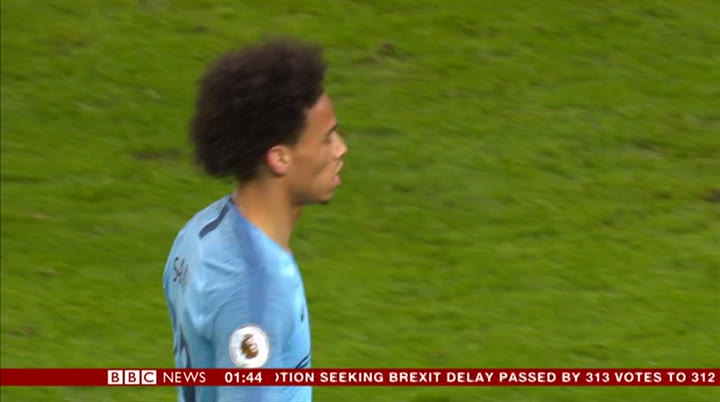 welcome to bbc news — broadcasting to viewers in north america wind over cardiff leaving them a point clear of liverpool and around the globe. with six games to play. my name is duncan golestani. our top stories: bayern munich are through to the semi—finals of the german cup after edging out second division heidenheim by the odd goal in nine... prosecutors raid the tokyo home of and sabalenka sees off kozlova to seal her place in the last 16 of the charleston open. former nissan chairman carlos ghosn, arresting him for an fourth time. to the right, 313. to the left, 312. hello and welcome to the programme where we start with the footballing a close call as british mps vote to news that manchester city have moved force the prime minister to ask for back to the top of the premier an extension to the brexit process league thanks to a 2—0 win ina bid at home over cardiff. first half goals from kevin de bruyne and leroy sane sealed the wind that means they're leaving the eu without a deal. one point ahead of liverpool with six games remaining and the bbc‘s john murray was watching. tokyo's attempts to purchase a never at any stage that distant like russian air defence system because a being anything other than a whole diplomatic row with the us. and a victory. the champions made 17 hunt for salvage from changes, 18 garoppolo philfoldable is giving his first premier league start. but city were straight into
1:46 am 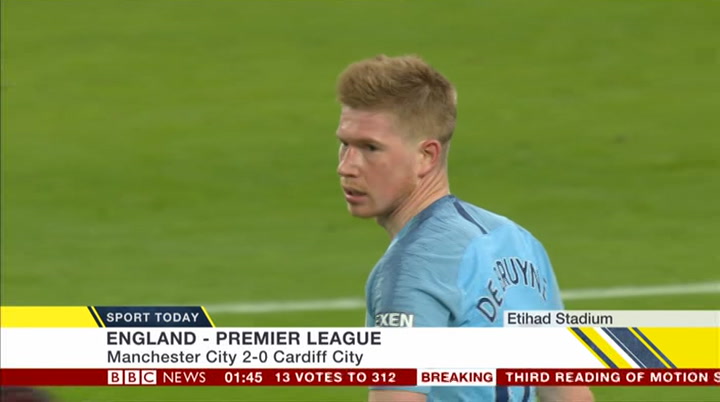 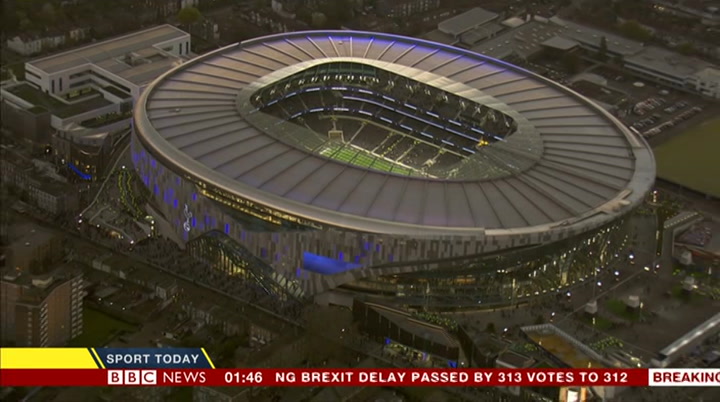 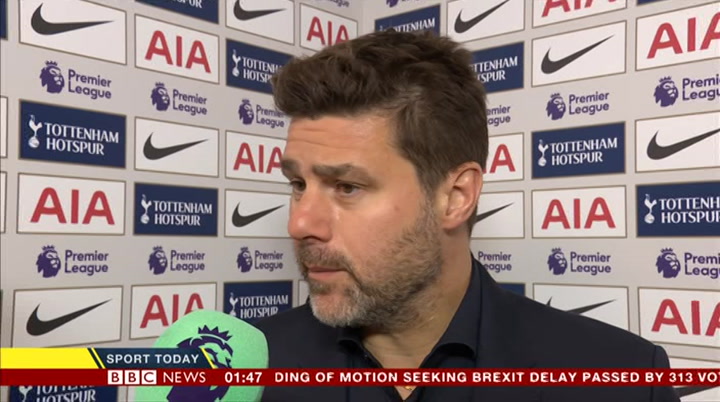 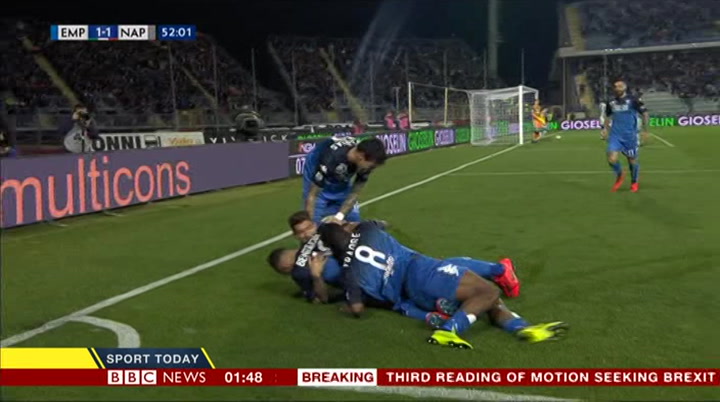 17 and happily well behind the runaway leaders. in other news, the two month hiatus contract is over. he scored a penalty in the wind. taken down by christian romer and the referee strata of red. that's called a red. he did lay it on a lovely pass for the score in the when taken them four points clear on the fourth—place rivals. elsewhere roma were held 2—2 at home by fiorentina and lazio were stunned by spal which lifts them five points clear of the drop zone while there were also winds for torino and second from bottom frosinone. in spain, real madrid suffered their first loss under zinedine zidane since his return to los blancos. real lost 2—1 at valencia leaving them third, 13 points behind leaders barcelona and five behind second placed atletico madrid. elsewhere there were winds for athletic bilbao and eibar while huesca and celta vigo remain in the bottom three
1:50 am 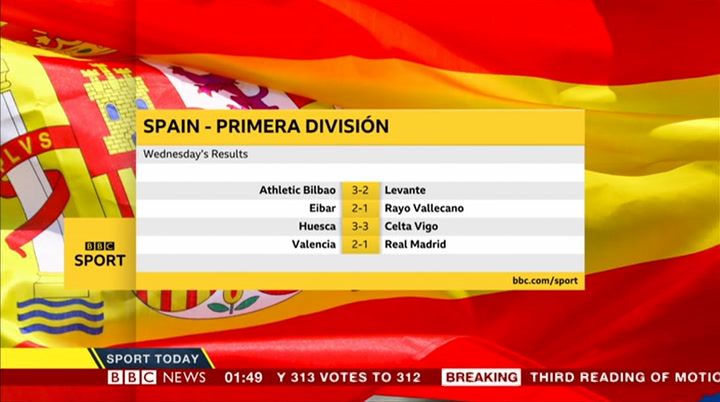 after a 3—3 draw. bayern munich are through to the semi—finals of the german cup. they remain on course to wind the title for a record—extending 19th time — but they left it late to beat second division side heidenheim in a nine—goal thriller. and they played most of the match with only ten men. colm harrison reports... wound the corner was headed in by leon after just 12 wound the corner was headed in by leon afterjust 12 minutes, a routine win for the champions by their second division opponents looked on the cards. yet, three minutes later, byron were down to ten men. he was going to be booked for this challenge, but the referee changed the decision from a yellow ca rd to everyone changed the decision from a yellow card to everyone after a va our review. suddenly, high to high and turned the game on his head. courtesy of robert and then this call finish from mark. the visitors turned a deficit into a lead at the break. byron coach ring the changes
1:51 am 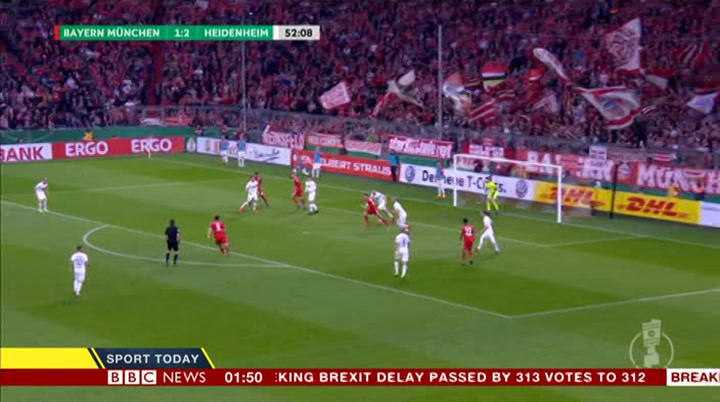 at half—time and brought on robert who made an immediate impact. that's biker after setting up thomas for the equaliser, they then tapped in from close range himself to restore the home side lead. the surge got in on the act, three goals in 12 minutes, and they were back in charge. they were not done. they struck back twice in a three minutes bell midway through. both goals scored by robert. making it 4—4. they had the final word. six minutes from time come and with extra time limit,, there was a penalty for handball. they put away the spy to claim the second goal of the night. tackle one pass fifth any place in the last four. —— bayernfor. also through to semifinals. the international by them with their long ranger.
1:52 am 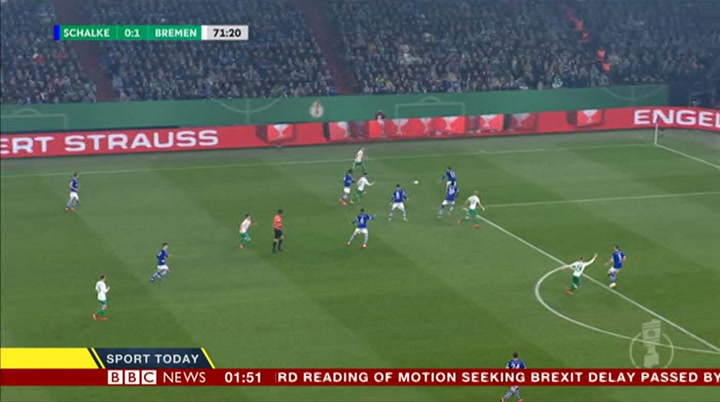 seven minutes later, the second. a 2-0 seven minutes later, the second. a 2—0 victory. theyjoin the semifinals. in france — paris saint—germain will play rennes in the coupe de france final. kylian mbappe was among the scorers as they beat nantes 3—0 in their semifinal — and will now go in search of a fourth successive title in the competition. celtic took another step towards an eighth consecutive scottish premiership crown following a win at relegation. paris st—germain alone timothy got the visitors on their way after 1a minutes, his head are following a goalmouth scramble had bulimic at the crossbar and bounced over the line. ryan christie put the result beyond doubt by following that, a fire brick throw onto the pitch disrupted the match, before it raced out a few minutes later as the hooks maintain their or ten point lead at the top of the steps. after tennis,. 3—6, 6—3,
1:53 am 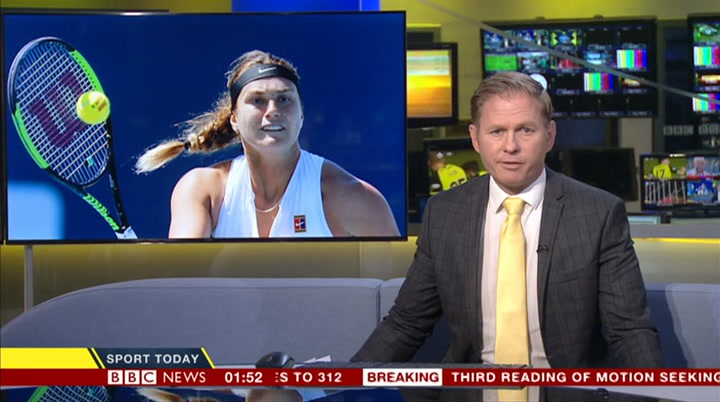 aftertennis,. 3—6, 6—3, four after tennis,. 3—6, 6—3, four have a advancing to the last 16. well number ten have won the only previous meeting. —— the well number ten had one only. she lost the first set to the ukrainian qualifier. but after winning the second set, the russian stormed into a 5—1 lead, only to let her opponent back into the match. the 20—year—old will cover it to seal a victory and will cover it to seal a victory and will now play the olympic champion monica puig. former french champion ostapenko also survived a scare. the let it be the pairs only previous meeting two years ago. and she eventually won out. —— the let the windy and previously. she will play the madison keys. in major league
1:54 am 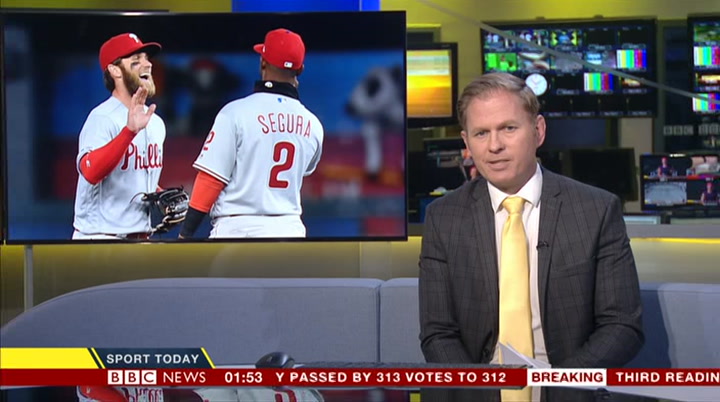 baseball, the washington nationals avoided back to back defeats against the philadelphia phillies, as they one and 9—80 home on wednesday. former player bryce harper was once again and booed by the crowd, but after taking a game starring role of the day before, help 2a hours later his first run, hitting a two run homer by zimmerman, this three run effort saw the nationals build up a 6- effort saw the nationals build up a 6— to lead at the bottom of the third inning. and with the game then tied at eight in the final any, the picture walking him. with the bases—loaded excellent there in washington! with the victory. in the nba, 12 games taking place, culminates with the final game between the houston rockets in the la clippers. cracking games coming up la clippers. cracking games coming up heading towards the postseason. also on the website, you can get all
1:55 am 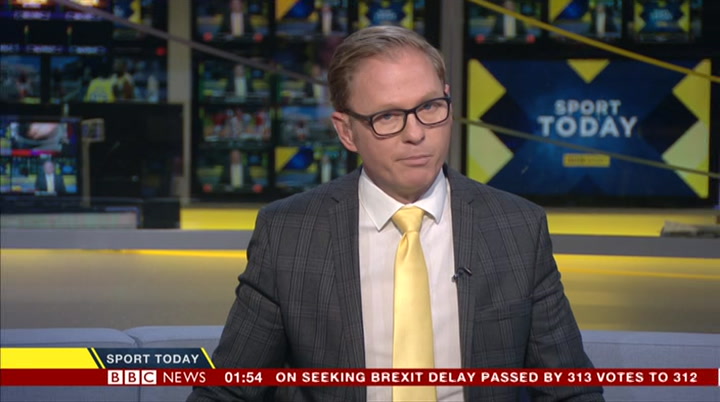 of the latest on manchester city. back to the top of the premier league now. for much more. till next time, goodbye. hello there. it's certainly been quite a turbulent start to the month of april. let's look back at wednesday's weather under an area of low pressure, we had clouds spiralling across the british isles, gale force gusty winds in the far north. for some, it brought a classic april day. sunny spells and scattered showers. not feeling too bad and the sunshine, some of the showers quite heavy with hail, but for others, this is what we were greeted with the first thing in the morning. some lying snow, several centimetres in places across parts of scotland and north englad. it does look like this is a potential for further snow over the next few hours, but in a slightly different air. it is worth bearing in mind there could be a little bit
1:56 am 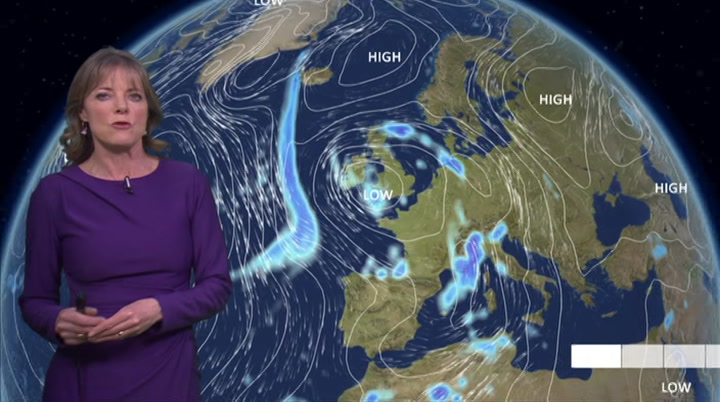 of disruption on minor roads. that area of low pressure is slipping this southwest and that is where we are likely to see the most unsubtle weather over the next few hours. any snow is likely to be to higher ground across wales but it is worth bearing in mind we could see slushy deposits at lower levels and may be for a time into west midlands as well. circulating around that low is a band of showers, it'll be a pretty miserable early morning rush hour. elsewhere, some clearer skies and sunshine coming through. this area around scotland slowly edging its way westwards as we go through the day. into the afternoon, the best of the sunshine looks likely to be the further east you are, underneath that area of low pressure, we still see the bands of rain circulating around. by friday, the low starts to lose its grip a little. it sinks further south and west, weakens slightly and the one direction starts to come in from southeasterly, a slightly mild source and that will be a noticeable change across the country.
1:57 am 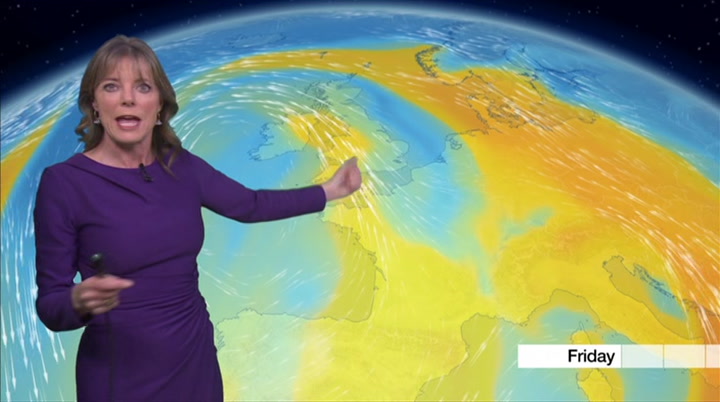 it means that the showers are likely to be if you far between in comparison to what we have seen for the there is impotence on friday starting gun for the showers but they will fade away perhaps northern ireland seeing the heaviest into the afternoon. and elsewhere, some sunny spells coming through. and it will feel a degree or so milder back into double digits, ten to 13 degrees. that looks likely to be the scene as we move into the weekend. because that southeasterly flow will continue to drag and milder air from the near continent, the only issue with that is it could bring a little bit more in the way of cloud and some moisture. it could be quite a murky weekend. that is worth bearing in mind. in comparison to what we have seen this week, it is not going to be anywhere near as cold. take care.
1:58 am 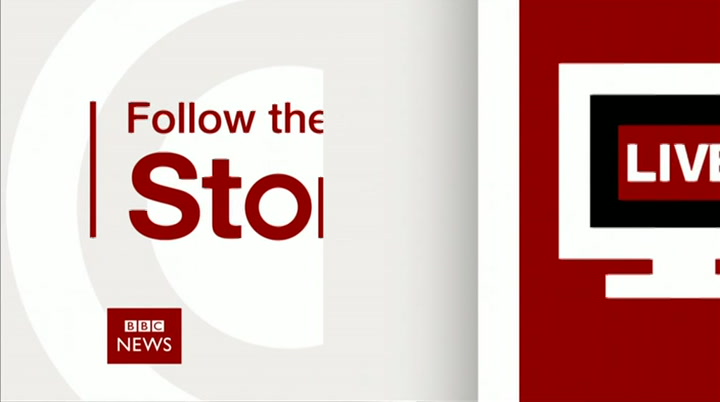 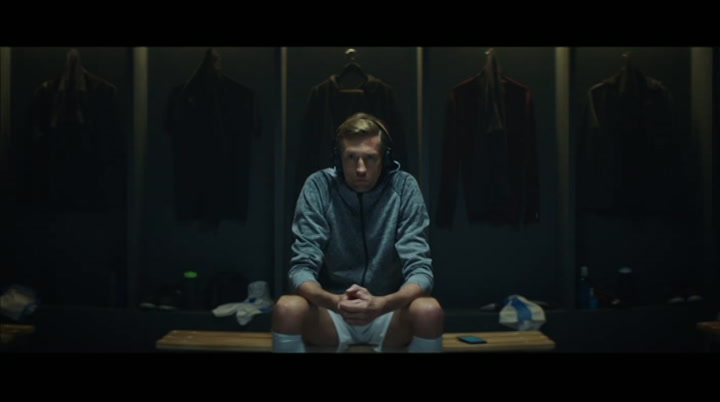 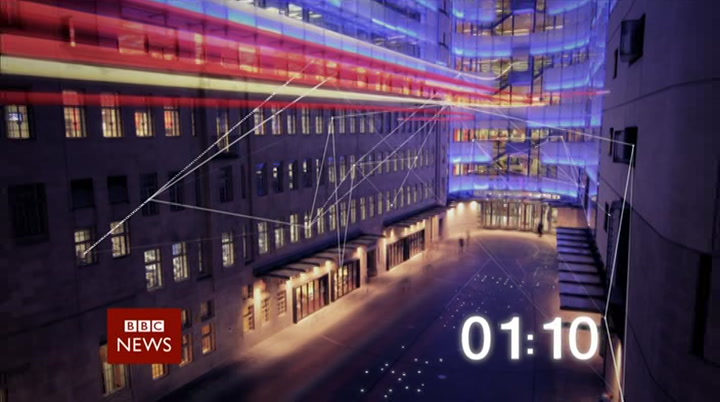 All the latest sports news and results from around the globe.
quote Contains 1 quote, shared 1 times, with 14 plays.