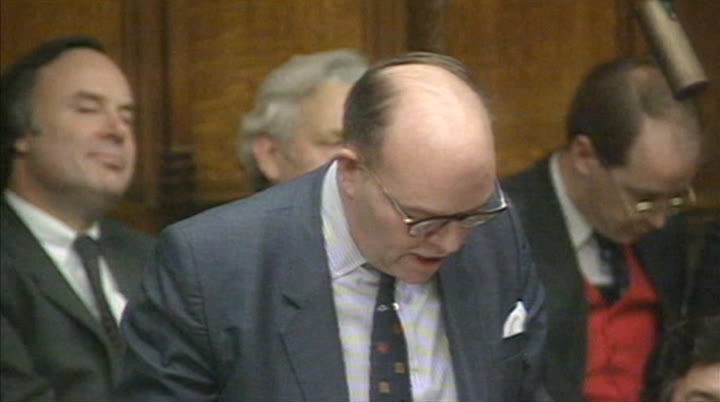 welcome to bbc news, broadcasting to viewers in history, he related in north america tongue firmly in history, he related and around the globe. advice offered to him and other mp5 i'm lewis vaughan jones. bya pr our top stories: advice offered to him and other mp5 by a pr expert. the impression you make on television depends mainly on fears of a major military confrontation in libya. your image, 55%. with your voice and un talks with the country's most powerful warlord fail as his forces advance on the capital. body language accounting for 38% of after easing threats to close the your impact. only 7% depends on what mexico border, president trump visits what he says is the first pa rt visits what he says is the first part of his wall. your impact. only 7% depends on what you are actually saying. laughter. theresa may asks the eu for another delay to brexit, but will european leaders agree? that suspicion of the cameras having the prime minister requests another brexit extension until the end style over su bsta nce that suspicion of the cameras having style over substance persist today. since bbc parliament started and the defender waiting to quit a broadcasting in 1998 it has dream job. england's danny rose says established itself as a fixture of the landscape. le sommer the bbc said the channel would no longer racism makes him want to quit show bespoke programmes and would be on our only when parliament was sitting. in october, that decision was reversed after protests politicians, including, gasuna, one of its stars, speakerjohn bercow.
3:46 am 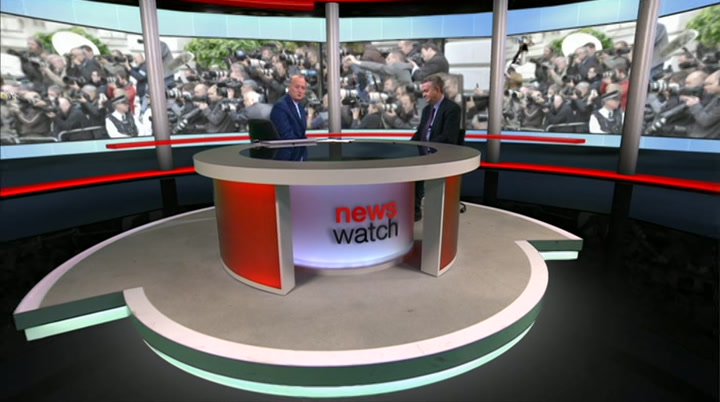 order! peter nelson has come in just two peter knowles. what is your explanation for these bumper audiences that your channel has been enjoying? the audience knows there isa enjoying? the audience knows there is a lot at stake. they can see it unfolding in front of their eyes. there is an excitement that we don't know, they don't know what's going to happen next. and that makes it really compelling viewing. so you have drama, you have a certain amount of entry going on... jeopardy. certainly plenty of that. you are explaining world for a lot of the audience, particularly new viewers, is quite an alien one, and arcane on. we don't intervene in a big way. on screen we have useful captions to guide you as to what is happening. what we have done through this, because we recognise it as a complex and difficult, is that in the divisions on the really big
3:47 am 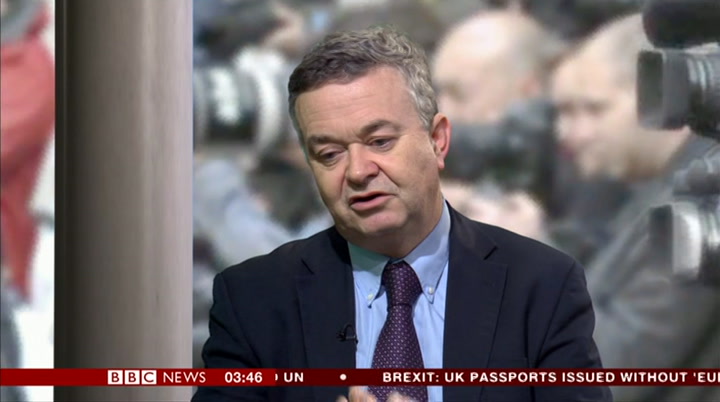 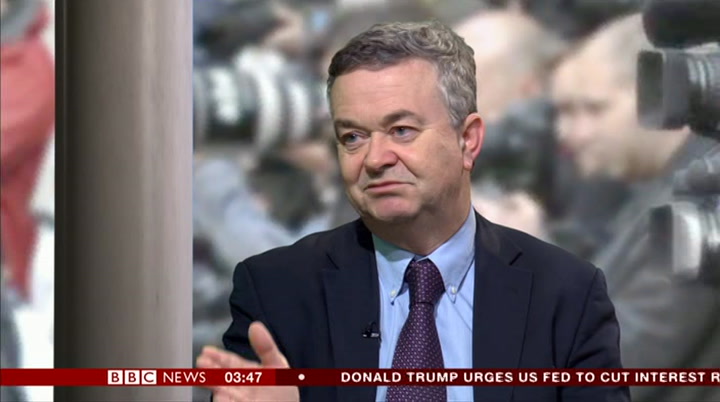 they have to back off another cover parliament? if you turn it round like that you can see why we end up sometimes with, briefly, with the same pictures being seen in several places. but i do understand the audience wondering what is going on. what about the question of restrictions? they clearly are limits to what you are allowed to show. because you only have the pictures that are supplied. some of it has changed over time. how has it changed and what are the continuing frustrations mozela has changed a lot. there is a much more flexible understanding of the rules. very importantly, we can see mps understanding of the rules. very importantly, we can see mp5 or peers listening and taking part in debates without necessarily being on their feet and speaking. so it is a much more natural way of seeing, it is more natural way of seeing, it is more like the experience of being in the chamber and watching it unfold. the other thing that has made an incredible difference is we have got cameras either side of the speaker that looked down the barrel of the
3:49 am 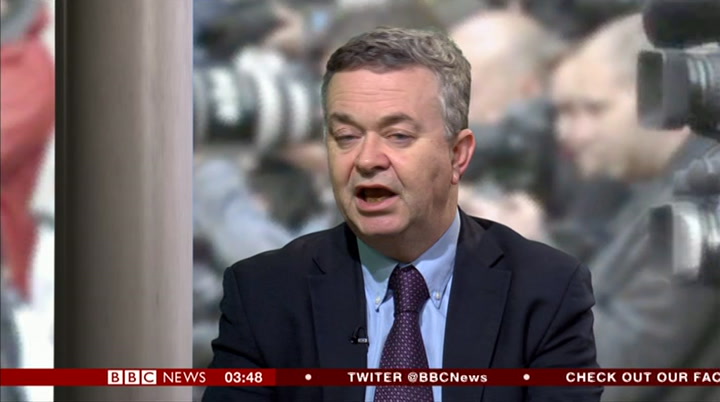 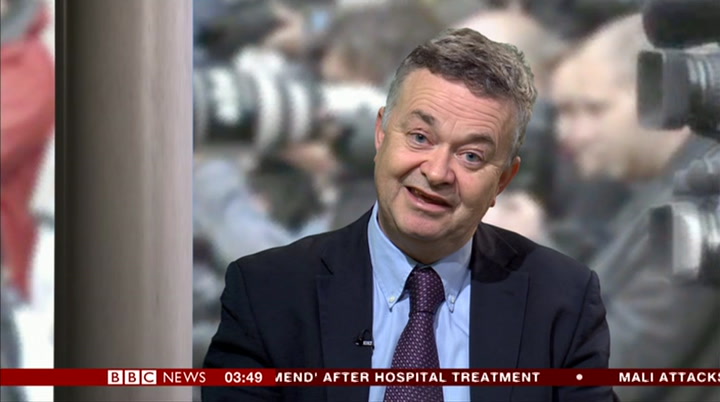 to report that. it is on social media, in the papers. it is still my instinct. therefore, in the reported coverage later, we have a day in parliaments, we have the image taken by an mp of the protest that that mp tweeted out —— day in parliament. we still have a journalistic instincts. it seemed legitimate to use that because it had been put in the public domain by an mp. without any fla k public domain by an mp. without any flak from the health authorities. they are very sensible. we ask you about the question ian gow asked all those years ago, when he talked about the pr that was being given to mps to encourage them to look and sound of their best. do you ever worry a bit that there is an element of grandstanding, may be an element that has crept in as a result of televising, that the cameras have attracted that kind of behaviour or encouraged it? i don't think there
3:51 am 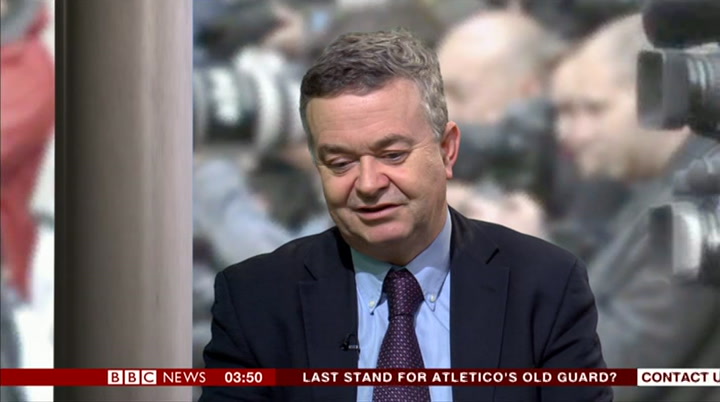 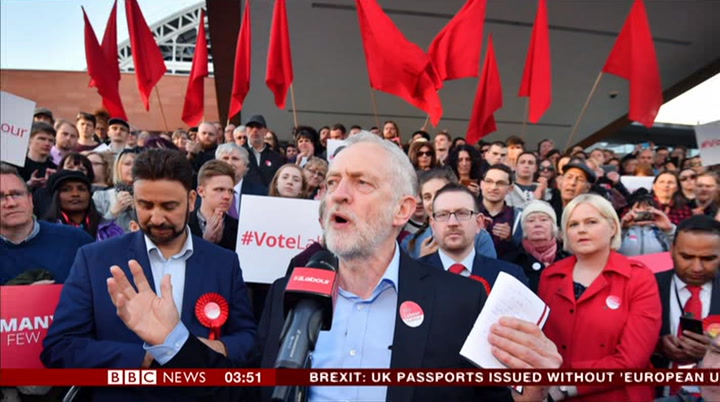 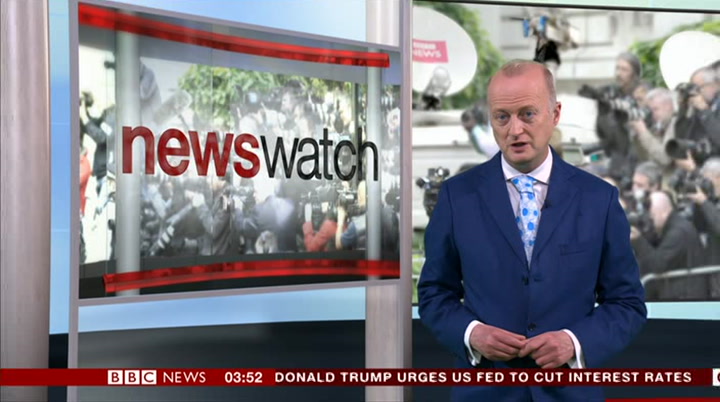 there was an angry response from some members of the wider tv audience to the inclusion in the programme of the question which was then posted on twitter by the question time team. one of those expressing views in a forthright way was ben thompson. others agreed. well, the bbc issued the following explanation. "
3:54 am 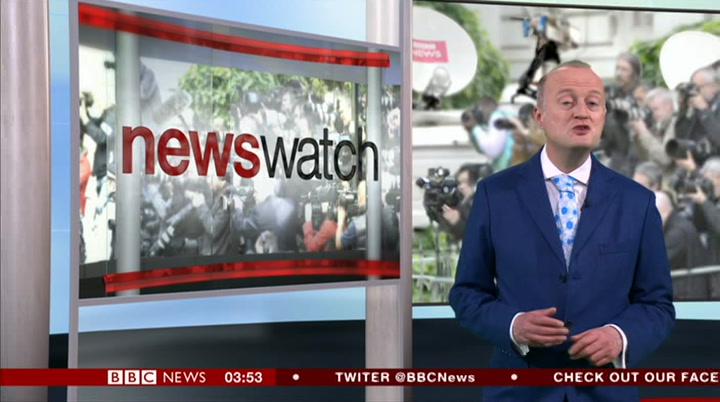 we had a general reminder of the use of social media in news which found its way into the public domain. it advised we all have personal views, but it is part of our role with the bbc to keep those views private. thank you for all your comments this week. if you want to share your opinions on bbc news and current affairs or appear on the programme then please e—mail newswatch. or you can find us on twitter. you can call us.
3:55 am 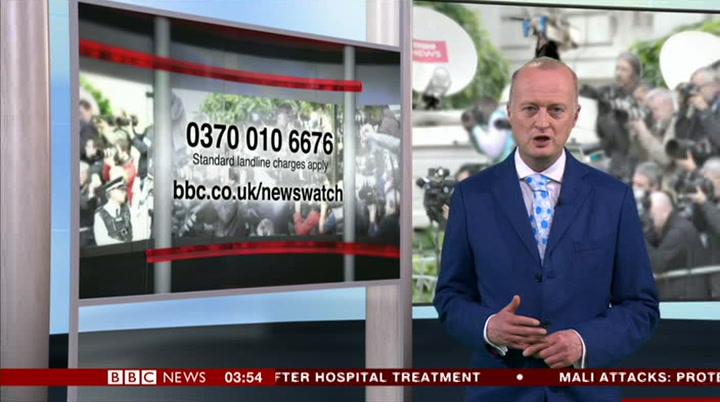 can find us on twitter. you can call us. and do have a look at our website. that is all from us. i will be back to hear your thoughts on bbc news coverage at the same time again next week. goodbye. hello there, it's looking like a pretty mild weekend across most parts of the uk, but, as i'll show you in a moment, sunshine amounts will vary. now, the last few days have been characterised by heavy downpours, areas of cloud circulating around an area of low pressure, but as we start the weekend, that low is retreating southwards, taking a lot of the rain with it and leaving us with easterly winds. where you are exposed to that easterly wind, parts of eastern england, a good part of scotland, we will have cloud and patchy rain at times. the further west you are with some shelter from the easterly wind, that is where we will see the driest of the weather and the best of the sunshine. the rain associated with that low pressure continues to pull away south—westwards through the early part of saturday. more patchy rain pushing into the north—east of scotland. in between some clear spells, most temperatures holding above freezing, but some areas starting with a touch of frost.
3:56 am 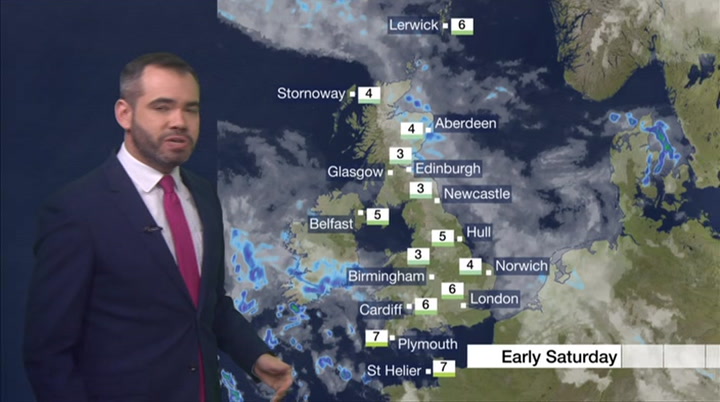 through the day there will be some spells of sunshine but generally more cloud coming in from the north sea into eastern parts of england. cloud spinning across scotland, some outbreaks of rain sometimes, in the north sea coast the wind coming off the sea. elsewhere, particularly where sunshine further west, it will be a mild day, 11—14 degrees, and at aintree for the grand national, blue skies overhead and a bit of patchy cloud here and there. temperatures as the race gets going, and around 5:15, around 13 degrees. it will be western areas that hold onto the clearest of the skies as we go through saturday night, so much so that parts of northern ireland could see a touch of frost. elsewhere, more and more cloud feeding in from the north sea, a spot of drizzle and blanket of cloud holding temperatures between 5—7. it does mean a grey start on sunday for many of us, and still a bit of patchy rain across north—east england and scotland. moving through the day signs things will brighten up down towards the south, but that could just serve to kick off one or two hefty showers, particularly to the south of the m4 corridor.
3:57 am 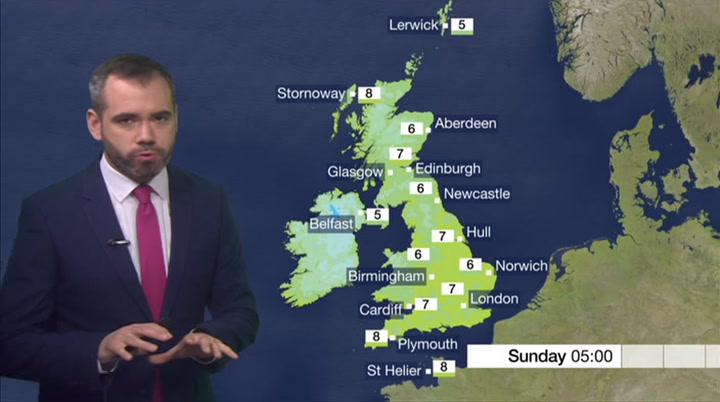 some hit and miss thunderstorms by the end of the day. 17 degrees in london, a little bit cooler further north and east. next week gets off to a mild start, but it looks increasingly likely that cold air will come back in from the north—east as the week wears on. the forecast looks like this. showers towards the south on monday and tuesday, a mild start to the week, but from the north—east things are expected to turn cooler, temperatures beginning to dip away.
3:58 am 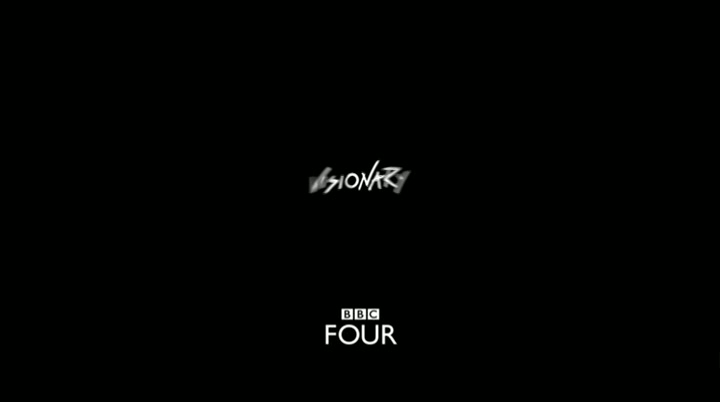 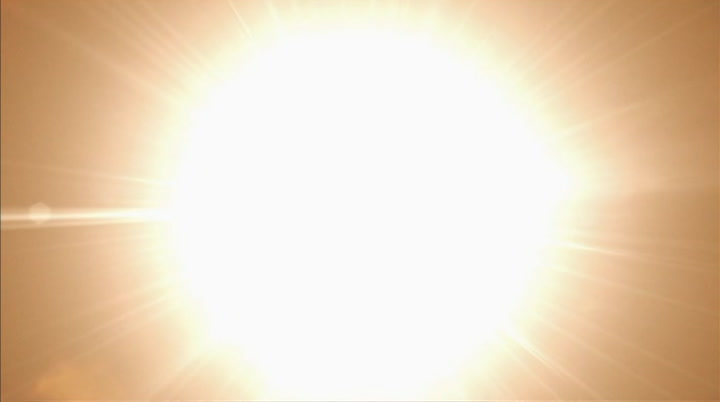 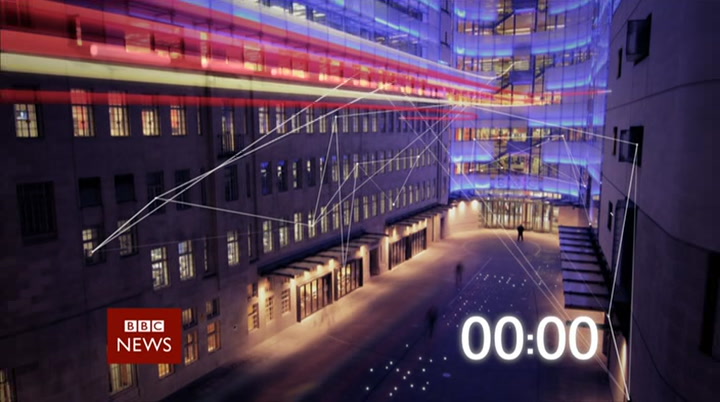 How the BBC Parliament channel has relayed the twists and turns of Brexit. Plus why last week's Question Time offended some of the LGBT community.