Due to a planned power outage, our services will be reduced today (June 15) starting at 8:30am PDT until the work is complete. We apologize for the inconvenience. 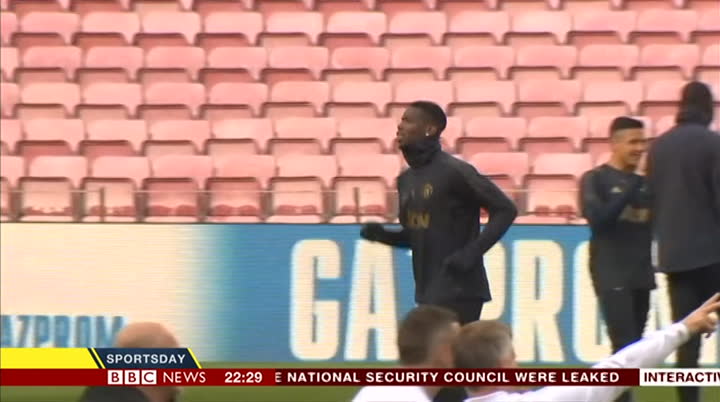 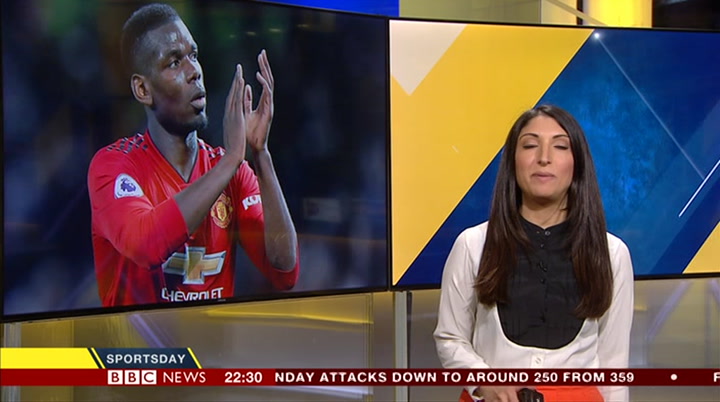 place in the pfa team of the year on the premier league show‘ earlier this evening. and if you missed the programme you can catch it on the bbc iplayer. there's been so much reaction to pogba's inclusion on social media — we've gathered some of them for you. dan graham has tweeted: "pogba has made the pfa team of the year over hazard, eriksen, wijnaldum, david silva, de bruyne among others. let's just all let that sink in for a while." oliver kay of the times agrees: "pogba in pfa team of the year! played very well for two months after mourinho left, but somewhere been poor and awful for most of the season — & yes i'm aware of the stats that make it look like he's played better than eriksen, bernardo etc". but chris winterburn feels pogba deserves his place: "surely the wider point about paul pogba's inclusion in the team of the year is that, a player who has scored 13 league goals and has nine assists as a midfielder is considered to have had a bad season by a large number of people."
10:32 pm 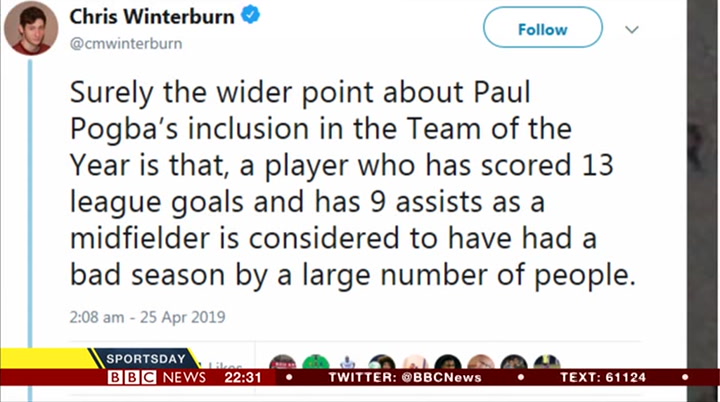 but tonight their under 18's were bidding for glory in the fa youth cup final. and things were just as tight as with the senior teens. it ended one all after extra time and liverpool won it 5—3 on penalties with captain paul glat—zell scoring the winning spot kick at city's academy ground. rangers might have ended up second best to celtic in the scottish premiership, but their youngsters got one over their glasgow rivals to win the scottish fa youth cup. nathan young—coombes was the match winner at hampden park. the former chelsea youngster heading home in the second half to secure a 3—2 win. it's rangers' first triumph in the final since 201a. now onto some of the day's other sports stories for you. following recent incidents of racist abuse in football — including to raheem sterling — the pfa is now asking for players to send any evidence to them ahead of a meeting with the government and football stake holders next month. chelsea manager maurizio sarri has
10:34 pm 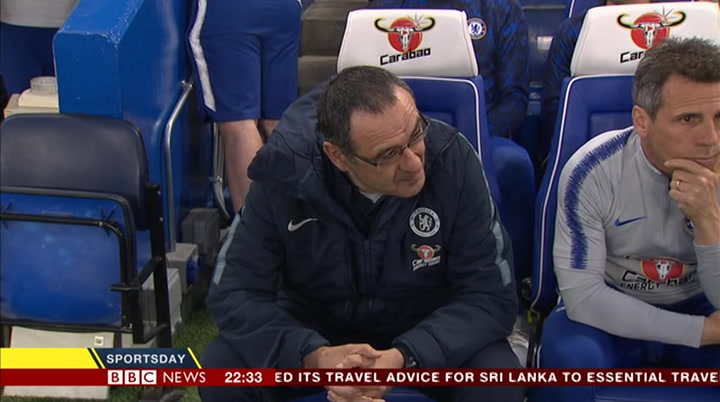 been fined eight thousand pounds after admitting a misconduct charge from the fa — but he escaped a touchline ban. it follows an argument with members of burnley‘s backroom staff in their premier league draw on monday. and british cyclist tao gayganhart has won his second stage at the tour of the alps. the team sky rider won the fourth stage in a four way sprint. russian pavel siva kov is the race—leader. sir mo farah will attempt to win his first london marathon this sunday, but instead of preparing quietly for the big race, he's become embroiled in a row with the former long distance great — haile gebresallasie — saying he'd been robbed at a hotel owned by the ethiopian. gebresallasie immediately hit back — alleging "multiple reports of disgraceful conduct" which farah denies. the bbc‘s athletics commentator and former 1500 metre world record holder steve cram says the timing of this row is far from ideal.
10:35 pm 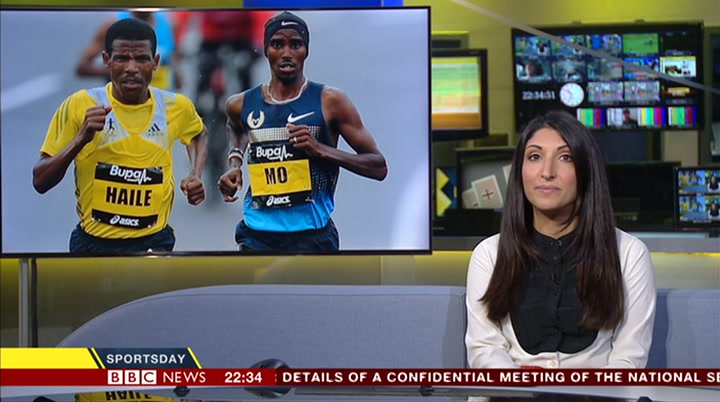 it's a bit of an unseen spot between the two of them, mo was not happy with how the situation was resolved out there, and he has responded publicly as well because they chose a public platform to let us know about it, i think it die down hopefully, two teens hopefully get together and sorted out but the meantime, mo will be heating —— heading for a great clash on sunday i think he still incredibly focused, i was chatting with them yesterday, is one thought was about the weekend and you know, he's got a great opportunity in front of big crowds to put a great performance i don't think it'll affect in. at the world snooker championship in sheffield — the last first round matches are taking place while the second round gets under way. in the last hour or so england's kyren wilson has made it through to round two at the crucible. he eased past scotland's scott donaldson, winning ten frames to a. two time finallist ali carter
10:36 pm 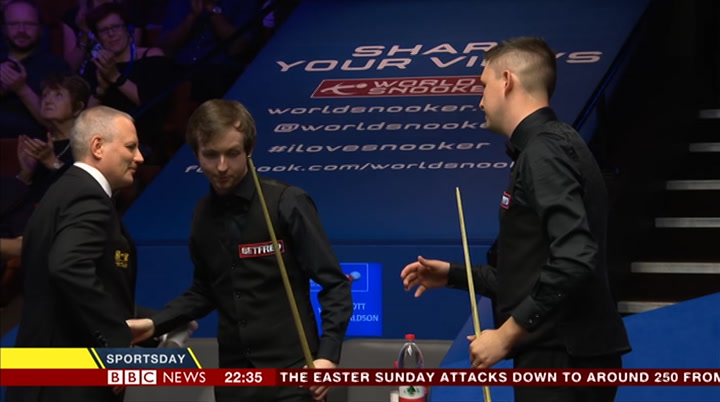 is through to the second round. he withstood a gutsy fightback from fellow englishmanjack lisowski before finally winning ten frames to six. carter will play china's zhou yuelong next. meanwhile — shaun murphy fought back in his second round match against neil robertson to trail five frames to three. murphy was on course for a maximum i—a—7 in the final frame of the session but missed the last red — the break ending on 112. another former champion mark selby trails 5—3 to gary wilson alex hales willjoin the england squad for their pre—world cup training camp in cardiff on saturday. hales has missed nottinghamshire's first three one—day cup games for what the county described as "personal reasons". the world cup begins in england and wales on the 30th of may. jofra archer has given a glimpse of what he might offer england
10:37 pm

in the coming months. the all rounder is in the one day squad for the series against pakistan next month. earlier today he hit a sparkling 27 not out with this six in the final over to seal a dramatic win for rajasthan royals against kolkata knight riders in the indian premier league. despite the victory, the royals are still second from bottom of the table. now voting is open for this year's — bbc women's footballer of the year award and all week we're hearing from the five nominees — today it's the turn of australia's star striker — sam kerr —the all time top scorer in both the us and australian leagues. i'm only one player at my life changed a little bit, most of the grouse and myself included are getting my noticed, so it's something you've dreamed about as a
10:38 pm 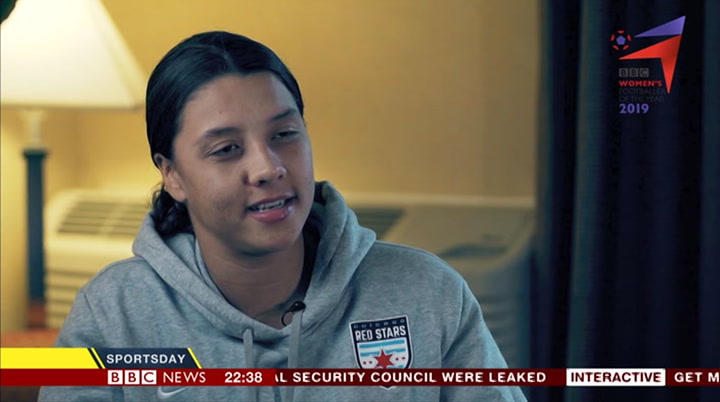 kid to be a role model and be a famous sports star. hi, i a striker andi famous sports star. hi, i a striker and i play for chicago red styles in australia. are you kidding me with that goal? probably the most rewarding for me was winning back to back and then the w leak and i kind of needed axes and to prove to myself i could continue and score and prove to others but mostly myself and again he gave me lots of confidence going for it and it's my proudest moment but then also leading the team out as captain for first time is amazing also. my sporting hero of our favourite athlete is lebronjames. ijust love that he's been so consistent over 70 yea rs, that he's been so consistent over 70 years, he has a lot of haters but he
10:39 pm 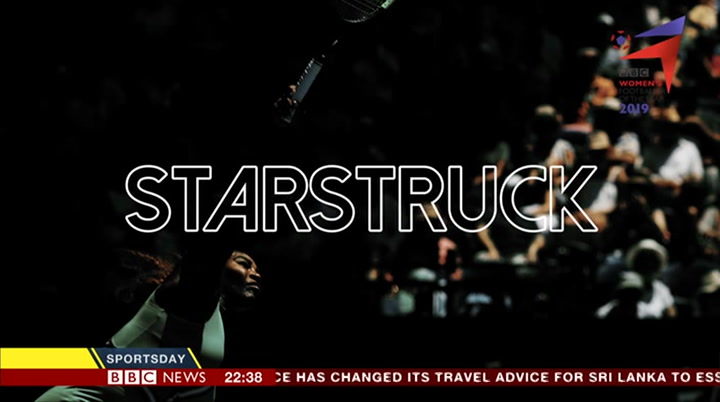 still seems to play well and that's a tough england is like the pressure on you. i don't really get sta rstruck on you. i don't really get starstruck but i did meet serena williams the other day and i was really nervous before because she's obviously the greatest athlete of all time probably male orfemale, she's right up there. she was like one of us she was chilling chided and hung out and it was like i think she may be the most nervous but i still was myself and not starstruck but i was sweaty pond before. when air. ithink but i was sweaty pond before. when air. i think my favourite celebration is definitely the backflip, i kind and always delayed but when it comes out, it's good for a good photo. i'm only one player and my life has changed a little bit, there's more to do than football and most of the girls and myself included are getting noticed more on the streets has been nice and kind of that thing you've always dreamed about is the intent to be around model and the fms brightstar and now that happening.
10:40 pm 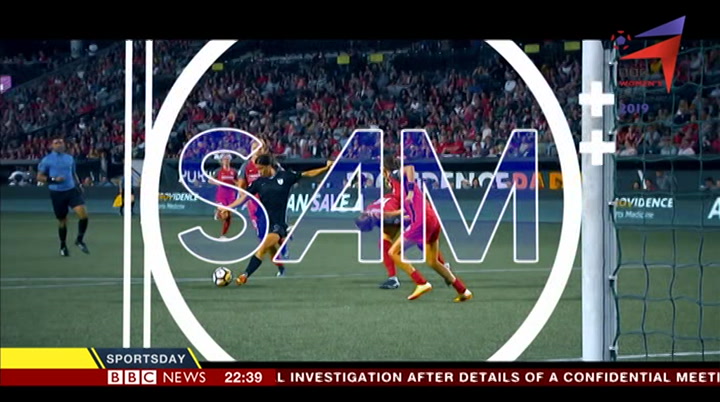 you can find details of all the nominees and cast your vote on the bbc sport website — voting closes on thursday the 2nd of may. and finally, who doesn't like a cheeky penalty. what about this from brisbane roar‘s eric bau—teac? his penalty gave them a 3—2 lead, although they did go on to lose 5—3 in the end. adelaide united's goalkeeper paul izzo was completely fooled by what is being called a faux panenka. absolutely audacious penalty. that's all from sportsday. coming up in a moment, the papers.
left
right
disc Borrow a DVD of this show DVD
tv