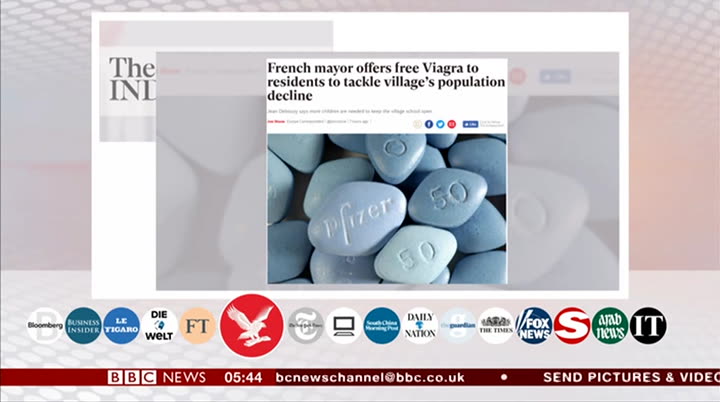 village is hoping to reverse the decline of its population through an unusual method, handing out free viagra. jean debouzy, mayor of montereau, hopes the proposed policy will help start a baby boom by producing enough children to keep the community's local school open. with me is iain anderson who's founder of the international communications agency, cicero group. we touched on this already. the sun had lined as a classic, you will be goodin had lined as a classic, you will be good in the morning with some images of theresa may, not very flattering all over the front pages. the daily telegraph ‘s got the snapshots of her. we probably need to explain gardening. basically, annual competitions that take place across
5:46 am

britain where people put on this very strange base. i watched the speech. she did a speech in the atrium of the global business. i spend a lot of time advising people. it looks like you're doing divine inspiration. well maybe theresa may is looking for some divine inspiration right now she might need that divine inspiration because she is facing a pretty serious challenge from the conservative backbench committee that is going to meet this evening. will she be facing intense pressure from her own ministers to quitand pressure from her own ministers to quit and allow a new leader to deliver brexit. that is what the sun
5:47 am

is implying by this headline, and also that's the question the telegraph asks. they say desperate, deluded, doomed. this is the endgame. we've said this a while now but what theresa may has tried to do the last three years is keep the conservative family together. between the left on the right of the conservative party. she is also try to reach out at the very end of this process over the last couple of months across the house of commons. and it's proving impossible. what you think, quickly before we move on, what would happen if she reached out across parliament three years ago. i'm writing about this for a minute. actually, she had a huge amount of purchase, she had a majority, the majority of the david
5:48 am 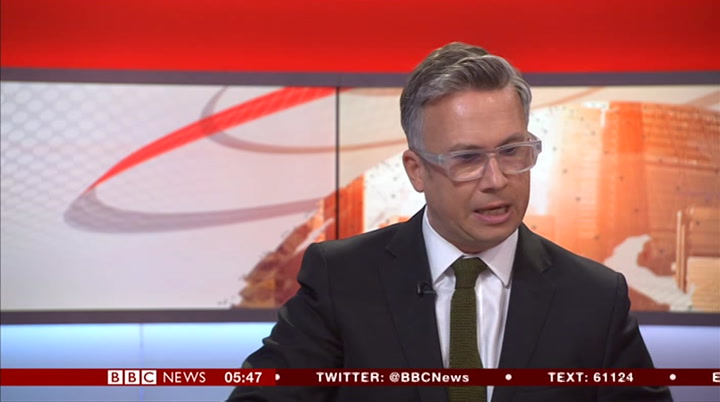 cameron left back in 2016. and there was a plan. cameron basically left her a plan to reach out across the house of commons. she decided not to do that. she decided to do much to try and do the deal with conservative mps on their own and i think we are now seeing the effect of that which is actually, she then loses a majority in the general election of 2017 and it's proved, i think it's proved impossible to do. we shall watch this space. british steel. my guest earlier, marcel, pricing analyst, couldn't really talk about the politics of it now complicated. british steel on the brink of collapse, thousands ofjobs at risk. this is a huge story for the uk, for business in britain. it's an historic story as well. it's very emotive. what will the
5:49 am

government doing this situation? this is kinda related to the previous story in a way. very strict rules within the eu about whether or not governments can use state aid to keep certain businesses alive. that will be while britain remains part of the eu. that will be high on the government's thinking. but one of theissues government's thinking. but one of the issues right now is that because the issues right now is that because the uk government is so gummed up with talking about the brexit issue, normally this actually should be the front page story absolutely everywhere and will be demanding all of government attention right now. labour is saying nationalise it. they are and that will be very, very attractive as an idea to a lot of people out there. i'm not one
5:50 am 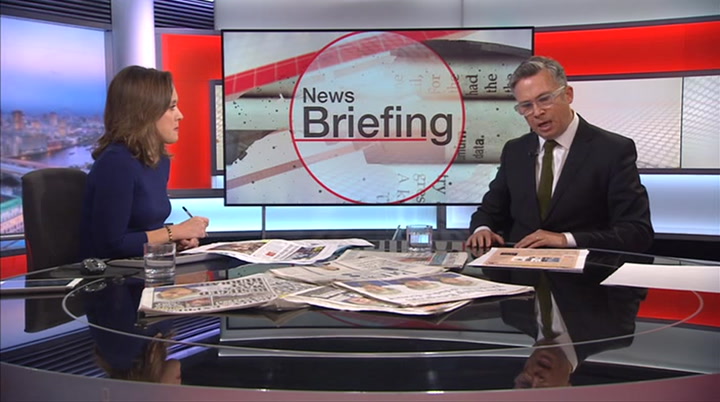 personally that does believe that is the right way to go. i see overnight the right way to go. i see overnight the company is talking about reducing the amount of money that it might want to get from the uk government in 75 million down to 30 million. time is running out on this deal. pretty much today, the uk government needs to put up or potentially british steel in scunthorpe will have to shut. on a similar theme, jamie oliver, his restau ra nt similar theme, jamie oliver, his restaurant empire has collapsed. this is got some international traction. being reported quite widely in the united states because he is well—known. he says he is heartbroken but again, this is one of many restaurant chains in the uk who are in this position. he's not alone. you are right, jamie is a
5:51 am 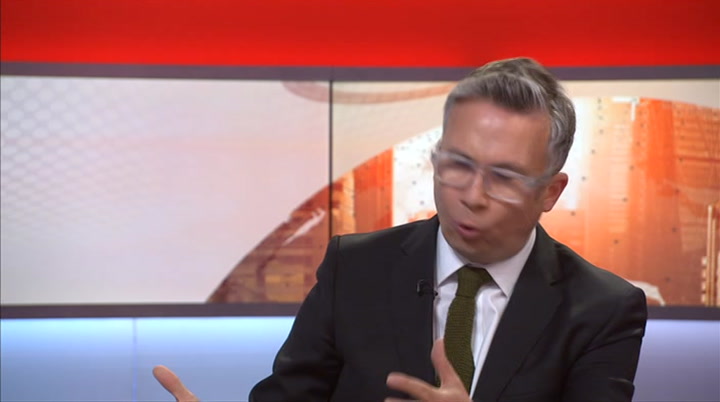 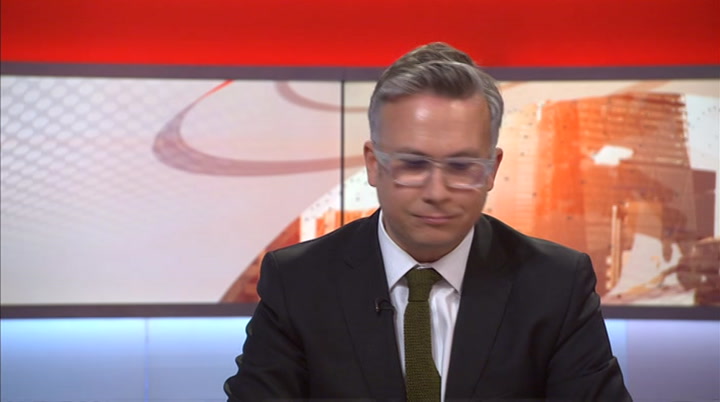 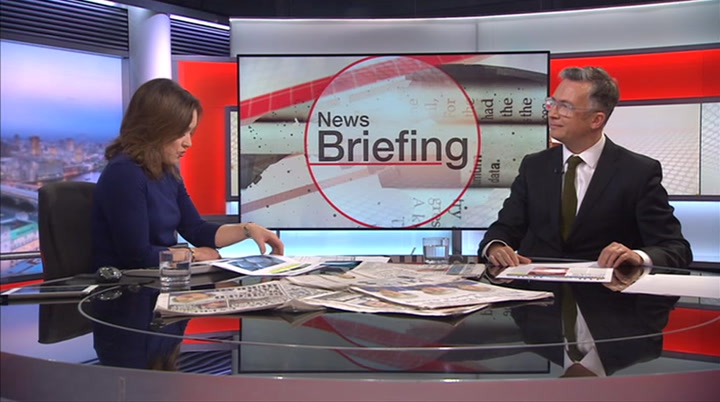 the voice you want, how you want it, you can have a shouting man. do we need a gender neutral voice or not? is this a real issue or the un going a little bit too far? i don't know if we need any of this stuff. what it does remind us of course is that the phone is probably listening to you all the time which raises a whole bunch of other issues. it's the previous issues that i'm actually more concerned about. that's why the one that was given to us asa that's why the one that was given to us as a family is unplugged and in my drawer and never plugged in. my sons were getting all their homework questions answered and not doing any work and ordering pizza. let's look then at this story about the town, little village in france whether mary is handing out free viagra, jean debusy, apparently the school
5:54 am

is facing closure. let's all rush down to the village. there is a question as to whether or not this is legal. what about the health issues? what if someone has a bad reaction? as far as i know, i am told, that you have to get viagra on prescription so unless the mayor has become a medic. a huge question as to whether or not this is actually viable. maybe we will send someone there to find out more. it's great to have you with us. thank you for your company. we will see you soon. goodbye.
5:55 am 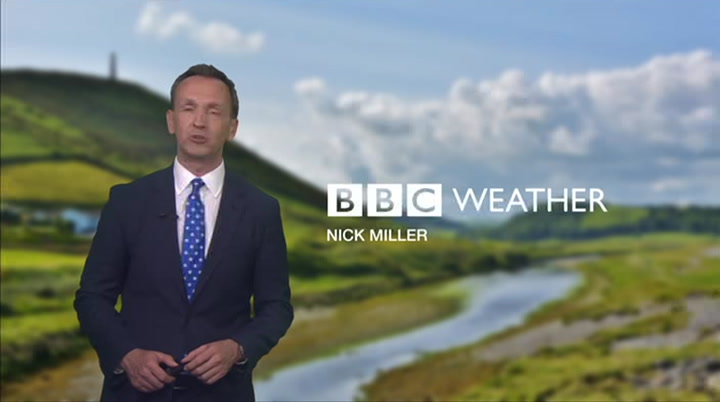 there's predominantly fine weather, with the gardens looking drier, the sight of rain bouncing off the ground could be viewed by some with envy, but that's what we had in the edinburgh area for a time on tuesday as the thundery shower moved through. but for much of the uk, tuesday was sunnier and warmer compared with monday, and it was dry. and there's more dry weather around for most parts of the uk in the day ahead. big exception, though, northern isles and northern scotland. here, we are going to see a weather system close by, with cloud and some outbreaks of rain. in fact, some persistent spells of rain, some heavier bursts as well, and a stronger, cooler northerly breeze. and you see this area of cloud from north wales, southernmost parts of northern england into the north midlands, that mayjust produce a shower as most other places are dry, a good deal of sunshine. it feels every bit as warm as it did on tuesday, that means high teens, and a few spots into the low 20s. now, on through wednesday night and into thursday morning, you'll notice that the rain
5:56 am 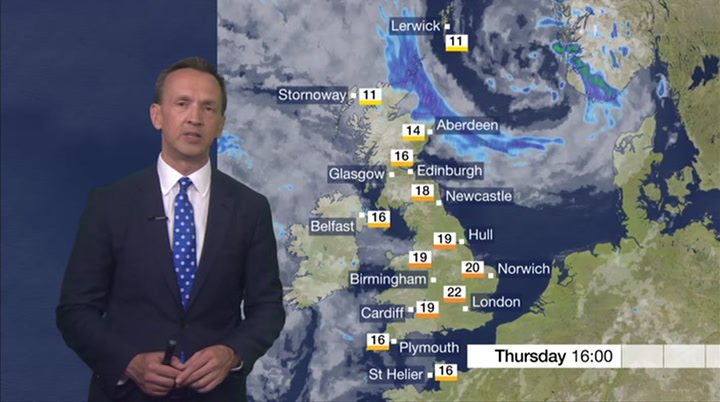 still hanging around northern scotland, 0rkney, though clearing away from shetland. this strip of cloud probably doesn't have any rain associated with it. for many, it's clear skies and for the clearer parts of northern england and northern ireland, temperatures in the coldest spots ending up close to freezing. now, for many of us, thursday is going to start with some sunshine. there's still some outbreaks of rain, though, with the cloud in the breeze in northern scotland, and the cloud increasing for northern ireland. towards the western coasts of england and wales mayjust produce a little patchy rain, whereas most areas will stay dry and clearly, if you've got the sunshine, still the warmth as well. still a few spots into the low 20s. by friday, we're expecting a bit more in the way of widespread cloud, though the rain has eased from northern scotland. but from northern ireland and through england and wales, as the cloud thickens, a bit of patchy rain moves its way further south. could start to turn more showery into the afternoon as it does so the further south it gets. but still where you get to see some sunshine, there's still some warmth out there. but there are some weather changes
5:57 am 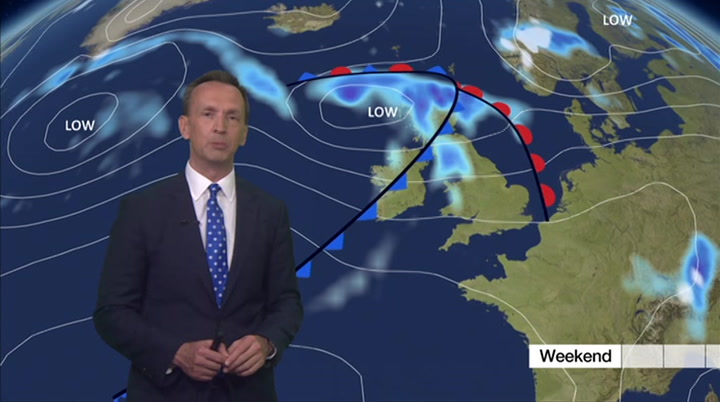 on the way, just in time for the bank holiday weekend, as our atlantic weather takes over once again with an area of low pressure moving in. and that does mean there'll be a bit more cloud around, the potentialfor seeing a bit of wet weather at times, not a washout by any stretch of the imagination. there'll still be some sunshine occasionally but notice temperatures just edge off a few degrees. it'll feel slightly cooler, probably more so because the breeze starts to pick up and there's less sunshine to be had, and the chance of rain. now, the chance of any substantial rain, at least across southern parts of the uk, remains low. and that's your latest forecast — bye bye.
5:58 am 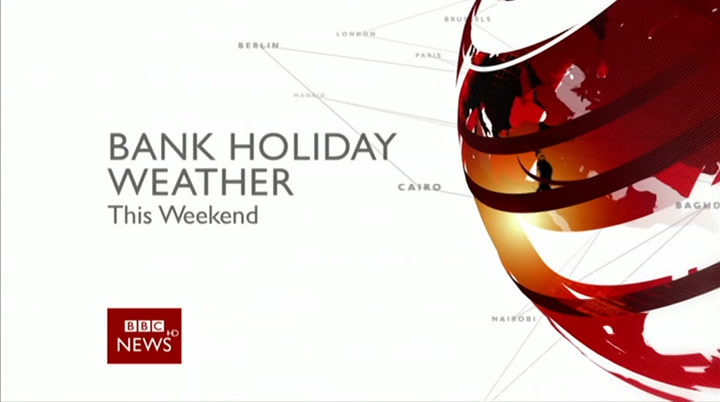 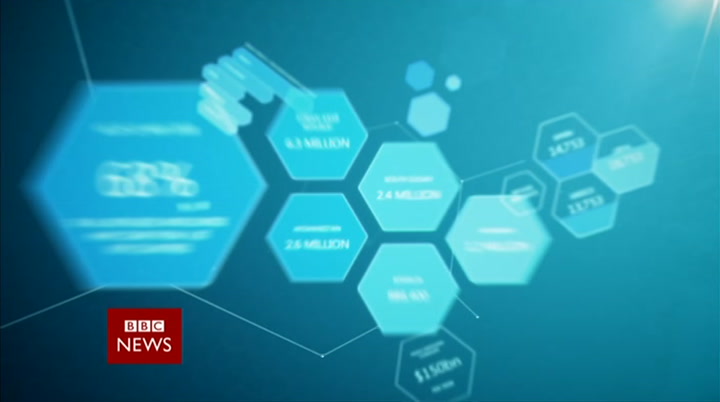 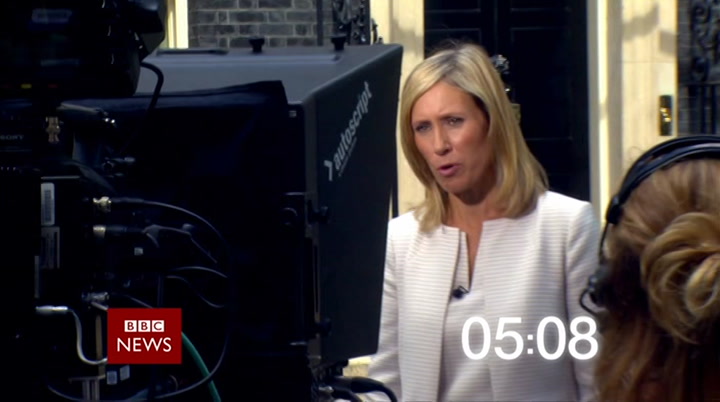 good morning. welcome to breakfast, with dan walker and louise minchin. 0ur headlines today: 0pposition hardens to theresa may's brexit compromise. this letter, released this morning, urges the labour leader to back her deal. last—ditch talks are continuing to save british steel. the firm says it will collapse without an emergency government loan. clothes store closures. will marks & spencer speed up its shop—shutting plan? we find out this morning how plans to turnaround the business are going. arsenal say they're furious with uefa after henrikh mkhitaryan decides not to play in the europa league final in azerbaijan because of fears over his safety.
left
right
disc Borrow a DVD of this show DVD
tv