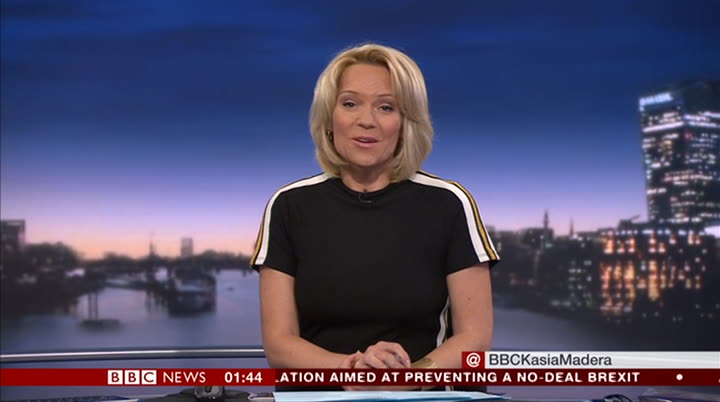 lam on i am on social media. mike website. i am on social media. mike is here at the top of the hour but now it is time for hello, i'm tulsen tollett and this is sport today, live from the bbc sport centre. coming up on this programme: a new world cup record and five for alex morgan as defending champions usa beat thailand 13—0 in their opening game france get back on track as they win in andorra to move top of their group in euro 2020 qualifying. and the weather strikes for the second successive day as bangladesh and sri lanka this time see their cricket world cup match abandoned. hello and welcome to the programme where we start with the footballing news that defending champions usa set a new tournament record
1:46 am 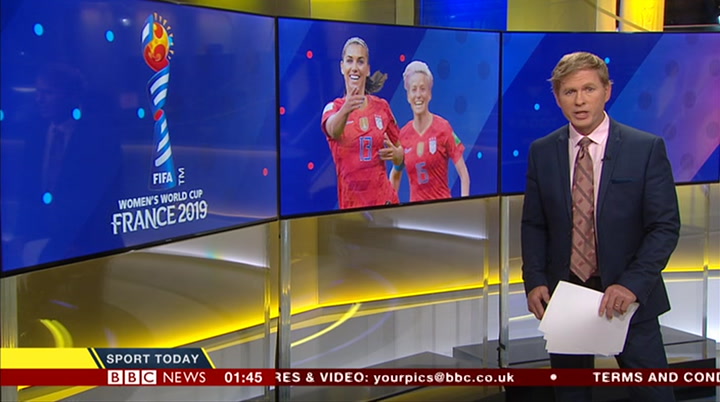 at the women's world cup in france. they were 13—0 winners over thailand beating the previous record when germany beat argentina 11—0 in 2007. alex morgan also equalled the goals in one game record at this tournament set in 1991, by scoring five. with news of that and the other two games played on tuesday here's colm harrison. the united states could not have wished for an easier start to their title defence in the writing was on the wall for thailand from the moment alex morgan headed in the opening goal after 12 minutes. this rout included two goals each from the veil and lewis but morgan surpassed them both. morgan scored her fourth of the game sending the americans into double figures in the process. after the reigning champions equalled the world cup record of ii champions equalled the world cup record of 11 goals in one match, morgan made sure they broke it as she scored her fifth of the game. the substitute completed the scoring
1:47 am 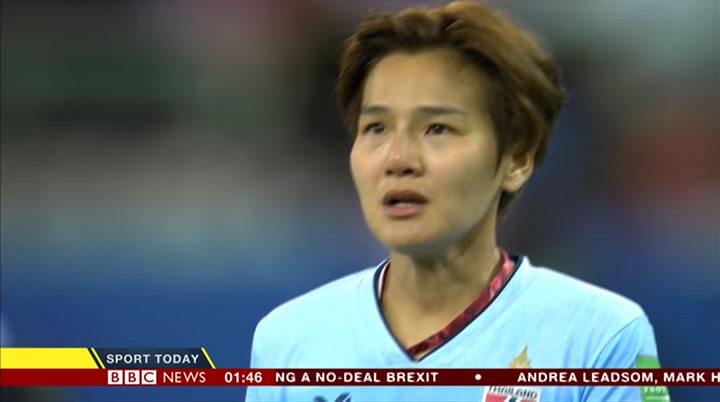 in stoppage time with 13 overall. unlucky for some. elsewhere on tuesday late goals with the order of the day after a lengthy delay for rain, sweden finally saw off debutantes chilli. —— chile. a fine solo effort in stoppage time made sure. earlier in the day, the netherlands began their campaign with a victory but they also left it late to defeat new zealand. gill scored the only goal of the game in stoppage time to give the reigning european champions a start in group e. well the big story of the day at the women's world cup is the usa's record—breaking13—0 thrashing of thailand. our reporter in france, sarah mulkerrins, says people may now question fifa's decision back in 2015 to expand the tournament to 2a teams.
1:48 am 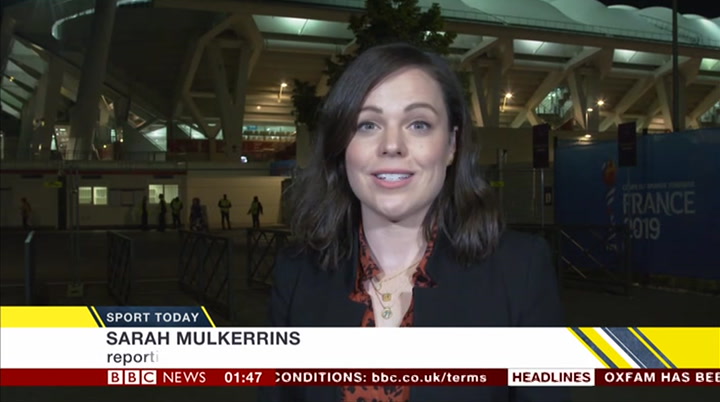 i think the big question being asked about this record making result for the usa tonight is how good or how bad a result like this, a comprehensive win for the usa like this is for the game. i think you would have to say that you go about four years when fifa introduced new teams to the tournament and expanded the number of teams to 2a, they did that in order to offer incentives to federations around the world to invest money in the women's game and to support the fledgling teams and leagues in the different nations. so at this stage with the women's game being so disparate around the world in terms of the haves and have not you are going to get match ups like this which does expose that golf. thailand with 33 places below the usa, arguably the most dominant team
1:49 am

in the most invested in team in women's football. i think the hope is that down the line in future tournaments to come that this little bit of pain now will start to ease as the game grows in areas and the gap will start to meet closer in the middle. there are three more games on wednesday — hosts france take on norway in the late game in nice, with both sides looking for back to back wins, while nigeria go up against south korea in grenoble. in group b — germany continue their bid for a first world cup since 2007 when they play spain in valenciennes. in men's euro 2020 qualifiers it was world champions france who got their group h campaign back on track. after losing to turkey on saturday they won 4—0 in andorra, with kylian mbappe picking up the first in the 11th minute and his side scored twice more before the half time interval while kurt zouma made sure of the result on the hour mark as he got the fourth in a result that puts france top of the group due to turkey losing 2—1
1:50 am 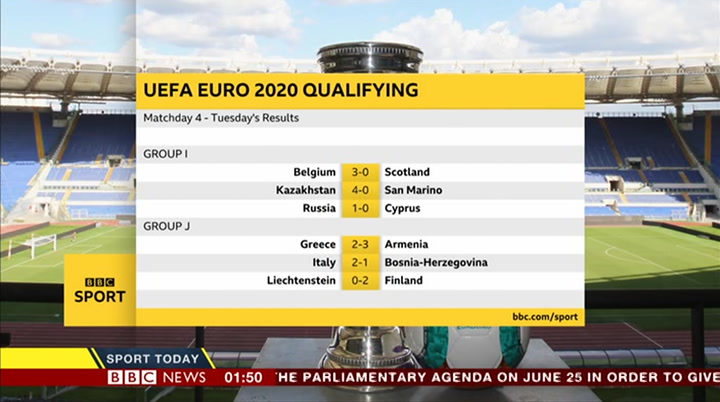 to iceland in reykjavik. germany were the night's big winners — with marco reus and serge gnabry each scoring twice as they thrashed estonia 8—0 in mainz. northern ireland are still three points clear at the top after winning in belarus where paddy mcnair scored the only goal of the game in the 86th minute. in group e, there were wins for hungary and slovakia who both push croatia into third place with hungary three points clear at the top. in group i, romelu lu ka ku scored twice for belgium as they beat scotland 3—nil in brussels. kevin de bruyne scored the other — as they made it four wins out four. there were also wins for russia and kazakhstan. italy have four wins from four games in group] — but they had to come from behind to beat bosnia—herzegovina in turin, with marco verratti getting the winner four minutes from time. there were also wins for finland and armenia. once again, rain was the winner at the cricket world cup in england — with a "no result" for the second day in a row. on monday, just seven overs were possible in the match
1:51 am 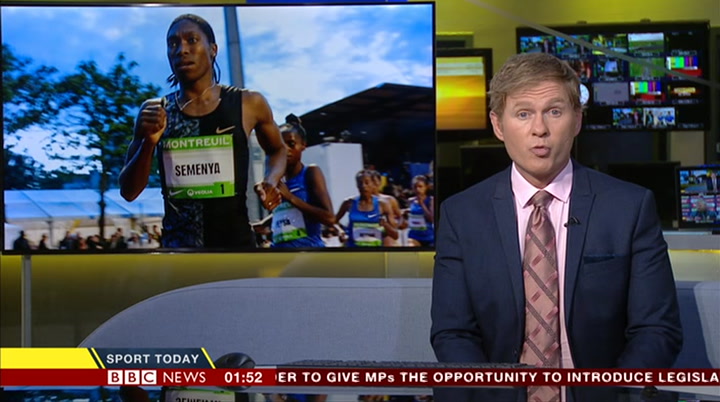 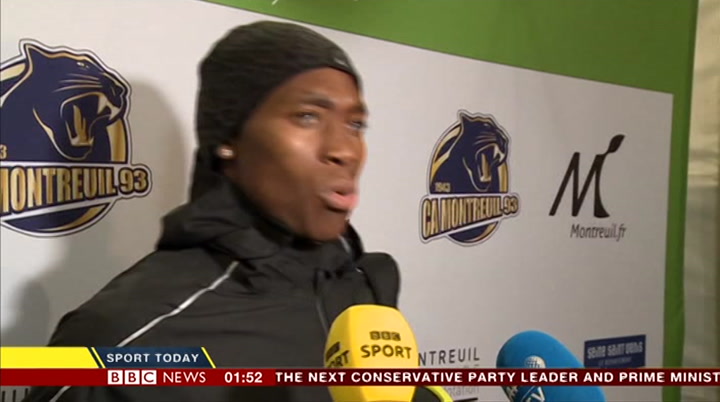 iama i am a talented athlete so i am not worried about anything else. even if i have to withdraw it no longer matters. i think i have one everything i ever wanted. now to tennis where fifth seed gael monfils struggled through to the second round of germany's stuttgart open on tuesday beating steve johnson in three sets. after trading blows in the first two sets it came down to the decider as frenchman monfils saved a match point withjohnson 6—5 up in the third set, before then claiming victory himself after two and—a—half hours on court to set up a match against another american in world number 85 denis kudla. also through to the second round but in easierfashion is 18 year—old canadian felix auger—aliassime who recorded his first win on grass at atp tour level beating latvian veteran ernests gulbis 7—5, 6—3 and will next face france's gilles simon. not such good news for
1:54 am 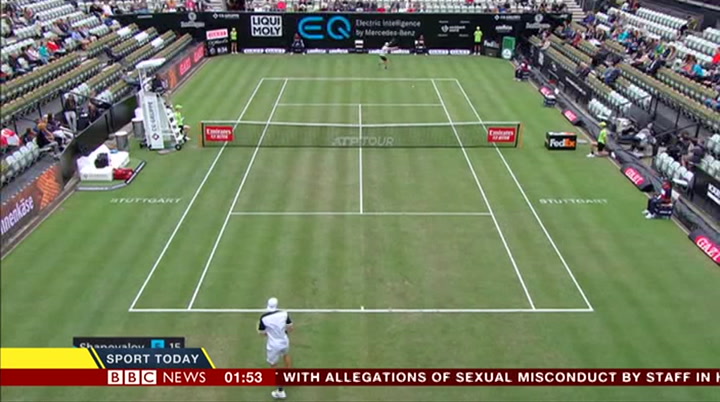 another canadian though as denis shapovalov was beaten by germany's jan—lennard struff. the 8th seed lost five successive games at the end of the first set and into the second — with struff winning 7—5, 6—4 to set up a match against serbia's miomir kecmanovic. and nick kyrgios was beaten by matteo berrettini — the italian won 6—3, 6—4 and moves on to play russian number two seed karen khachanov. the irish cyclist sam bennett won tuesday's 3rd stage of the criterium du dauphine. bennett — who won three stages in last year's giro d'italia — edged out the belgian wout van aert in a sprint for the line at the end of the 172—kilometre stage. the two riders were given the same time while belgium's dylan turns finished safely in the pack to retain the race leader's yellow jersey. at the last moment he was up there
1:55 am 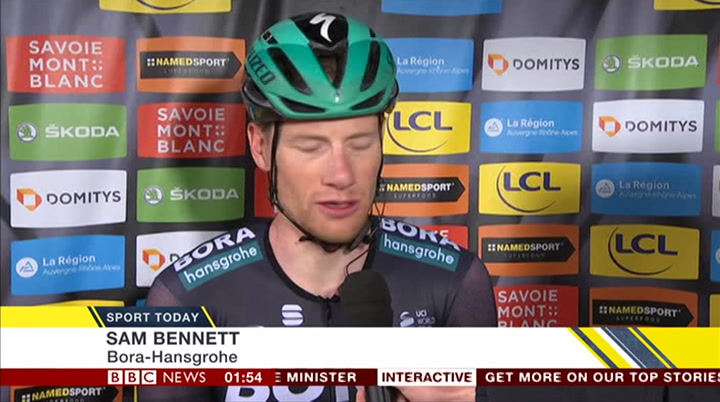 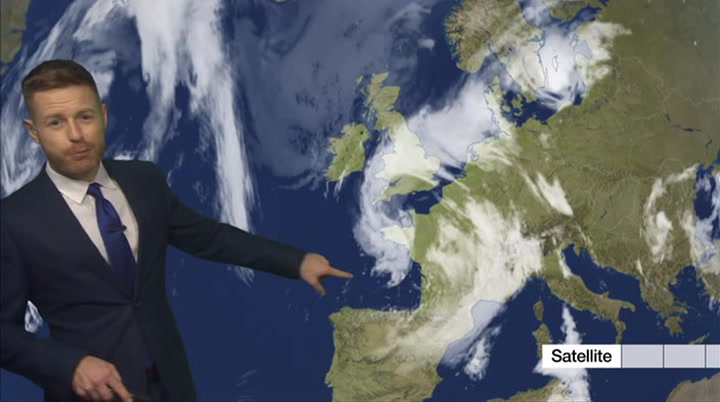 and quite changeable weather. now there's a big low pressure is stuck across northern france, around the channel here, and as long as there is low pressure here things aren't going to change. it will remain very, very unsettled. winds coming in across the north of europe but the winds will have to swing back around again. and they are blowing out of the south around central and eastern parts of the continent. that's the yin and yang of weather. one side of europe is hot and sunny and the other side is paying for it and it is cool and very, very wet. so here's the rain, early hours of wednesday morning. the low pressure, we've already established that, it's parked across this part of europe. so you can see spells of unsettled weather there across parts of germany as well. also we'll see thunderstorms
1:57 am 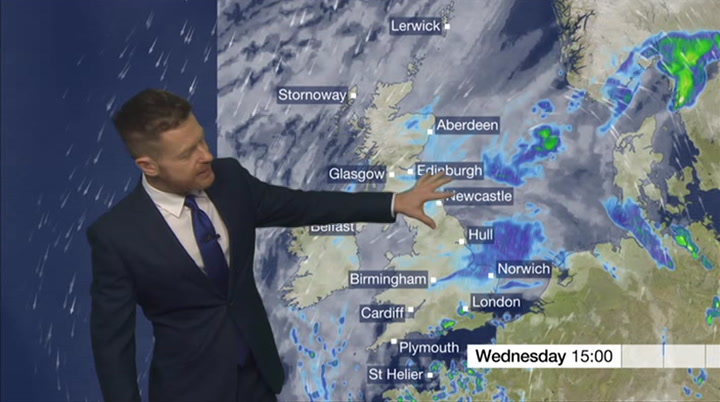 drifting out of the south and they will affect southern portions of the uk. notice a bit of a lull in the intensity in the rain over in the north, but that will get heavier later on wednesday. these blobs here, these are showers. thunderstorms developing almost anywhere across the southern portion of the uk. there could be some really nasty downpours. notice how this rain gets heavier as we go into the afternoon, quite menacing, threatening rain clouds. all of that is going to come in and bring a real deluge to parts of northern england, reaching parts of scotland and north—eastern england as well. a wet wednesday on the way. here's a look at thursday. the winds are blowing around like so, that low pressure's parked itself across the uk. the south, a few sunny spells, yes, but some thunderstorms. the temperatures 14—16 degrees, that's closer to the end of april, sort of may temperatures, really. so the low will wobble around
1:58 am 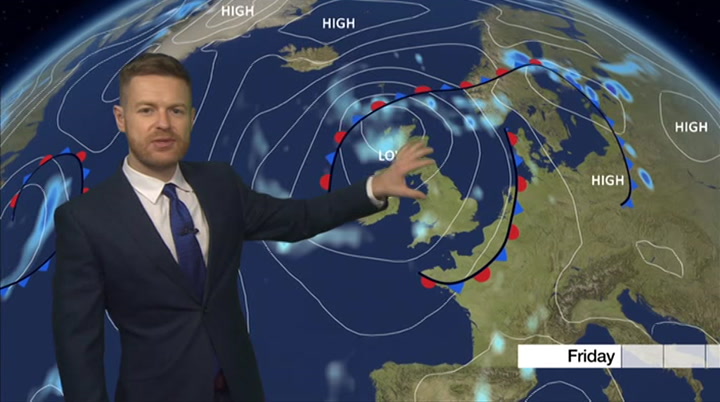 the uk, bringing us again spells of rain and showers as we head towards the end of the week. improving a little bit acorss europe. on balance, unsettled, as we head into the weekend. later there is a sign of things warming up, but not just yet.
1:59 am 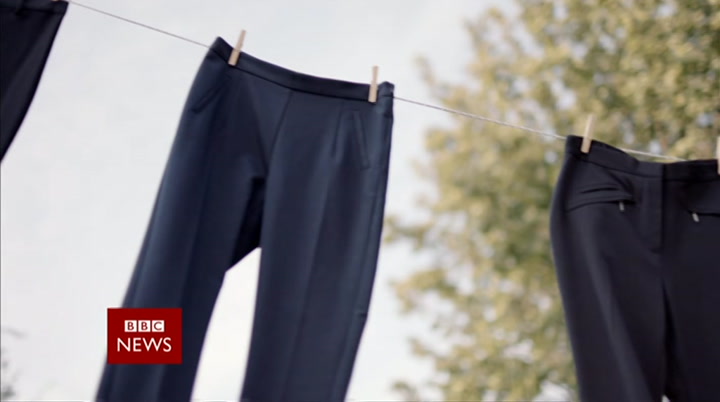 welcome to bbc news. i'm mike embley. our top stories: hong kong heads into another day of disturbance. thousands take to the streets against plans to allow extradition to china. trump and biden trade barbs, as they host campaign events for the 2020 election. a rare move by moscow, as mounting pressure from the media sees a reporter released. the tariff war with china leaves a sour taste for california winemakers as business dries up.
left
right
disc Borrow a DVD of this show DVD
tv