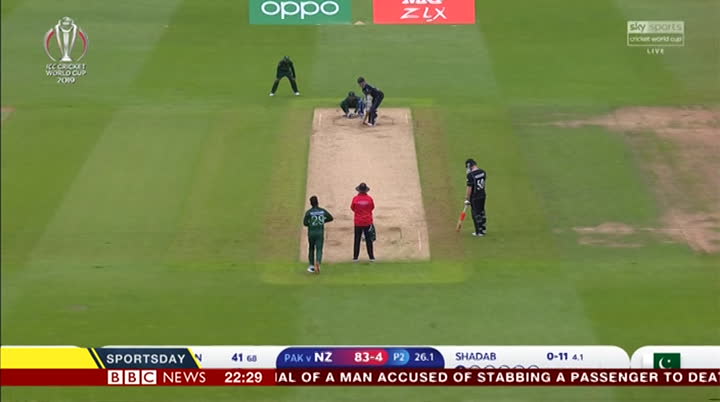 we could see everywhere, grasp. we could see everywhere, movements all over the place. like the sharp spin, kim williamson, the captain out, pakistan and endless time to make england nervous, pakistan could catch them. added, between them the heat new zealand to 237. so, how would pakistan cope when faced with the attack? ferguson made him flinch and let it fly two down. a times for level heads, they called him to the professor but this is an miscalculation, their crickets are most unpredictable and were to blow it. in amongst the chaos, operating in his own bubble of calm. every drive drained the new zealand bowlers in a game so complicated he made a century look simple,
10:31 pm 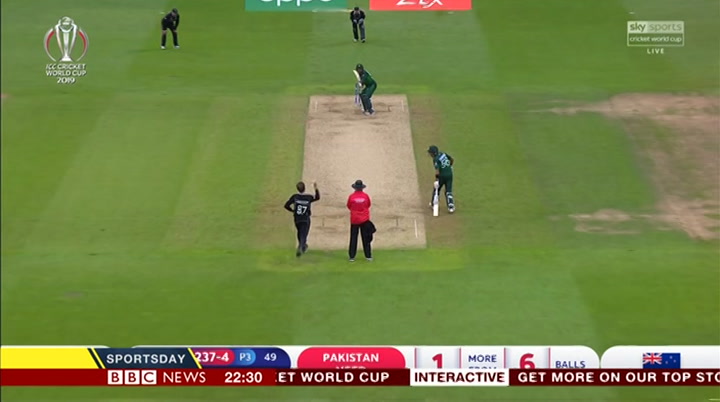 lingering on the moment. not long the match is over. 1992, pakistan won a world cup and watch out england, they are right behind you. so here's how the points table looks after pakistan's win. the top four sides remember go through to the semi finals. as patrick was saying pakistan's victory puts them sixth and right in contention, snapping at the heels of england who would reach the last four if they win their last two games but they're up against two of the strongest sides in thsi tournament — india and new zealand. now at the women's football world cup there's plenty for england to contend with ahead of tomorrow's quarter final against norway in le havre. as well rising temperatures in france there are concerns over central defenders steph houghton and millie bright who are both major doubts. our reporterjane dougall sent this report from deauville ahead of the match
10:32 pm 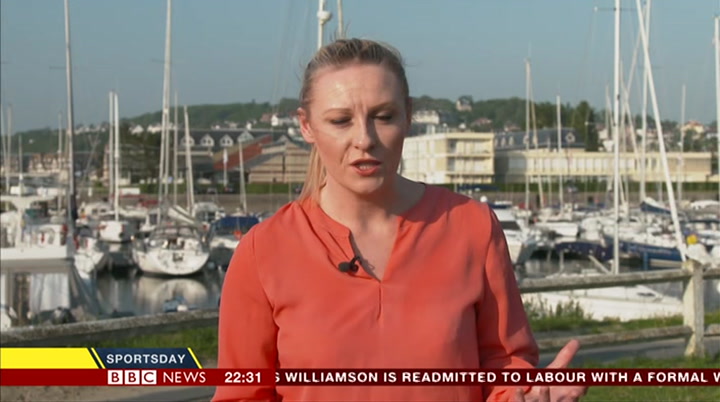 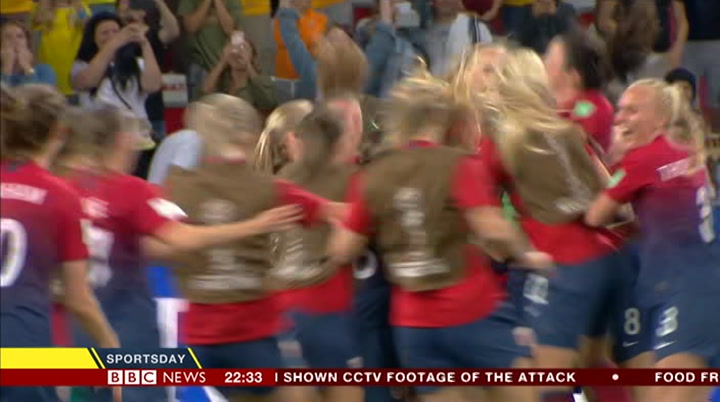 shows a lot of momentum. i think we have grown and grown as a tournament is gone on and we're going to analyse the best we can another's strengths and weaknesses and how to exploit them, and focus on us and what we can do in our priorities and 100% on norway and how we can get the result that is the best for us. talking about the impact of the weather here on this place because it is getting hotter. fifa have a rule that they'll be given drinks brea ks rule that they'll be given drinks breaks for the safety and he also prepared for that saying that there have been no surprises so far in this tournament and there it certainly will not be any tomorrow night against norway. the so these are the remaining quarter final fixtures, england face norway tomorrow night at 8 o'clock — that game will be live on bbc one.. the hosts take on the usa on friday, then on saturdaty italy play the european champions the netherlands and germany take on sweden.
10:35 pm 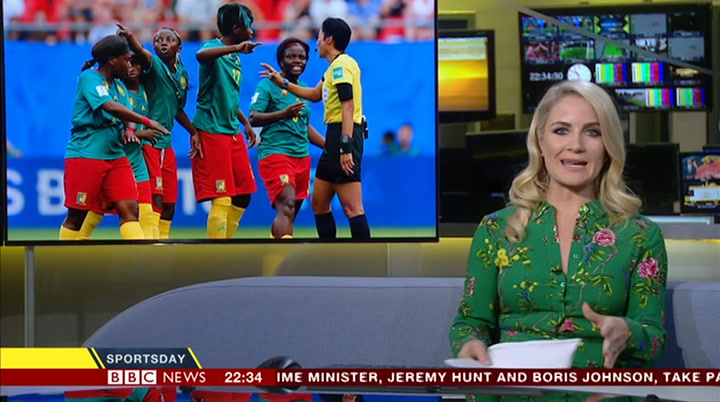 you heard jane mention that game between england and cameroon last sunday — a game with plenty of drama. and now fifa has announced it has opened disciplinary proceedings against cameroon. that game was marred by the team's reaction to two video assistant referee decisions, and by poor challenges. world football's governing body is investigating them for team misconduct, offensive behaviour and fair play breaches. well refereeing was one of the issues raised by that cameroon side along with var — something that's come in for a fair bit of criticism thoughrout this tournament after it led to several long delays and deliberations but legendary former referee pierlugi collina has today defended the use of the technology. the number of mistakes which are in the number of mistakes which are in the past have affected the results of the match and costing losses to
10:36 pm 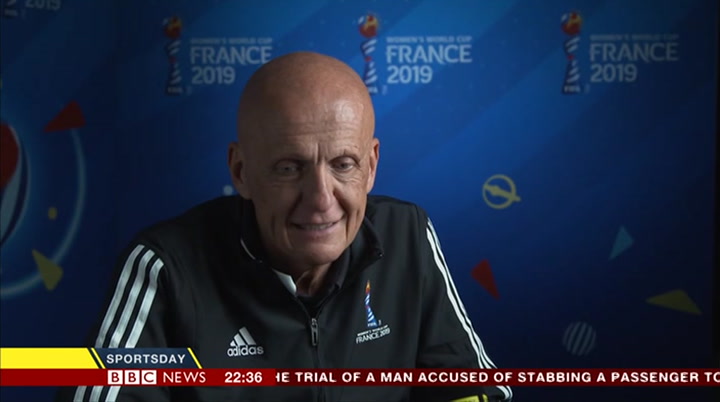 multiple team playing a game are very much reduced. why do you think the reaction to the va are is been less positive than last time, does it seem that way to you? it is something that i would try to investigate, to understand, the numbers, the statistics, to other competition. but to me is whether the decision taken on the field of play will correct and the very few m ista kes play will correct and the very few mistakes which were committed so far did not affect the result of any game. manchester united have reached an agreement with crystal palace to sign right—back aaron wan—bissaka. the deal is worth 50 million pounds and the england under—21 international is set for a medical shortly before going on holiday. united have offered wan—bissaka
10:37 pm

a long—term contract and wages of up to £80,000 a week. he was earning about 10,000 at palace meanwhile leeds' teenage wingerjack clarke is due to undergo a medical at tottenham ahead of a 10 million pound move. it'll be the club's first signing since january last year. at the africa cup of nations, nigeria have become the first team to reach the last 16 after beating guinea 1—0 in alexandria. the super eagles secured their place in the knockout stage thanks to kenneth 0meruo's second—half header. they play madagascar in their final group game on sunday, while guinea must beat burundi in their last match and hope other results go their way. in group a zimbabwe scored their first goal of the tournament as they drew with uganda. khama billiat equalised before the break for zimbabwe but they will have to beat dr congo on sunday to get out of the group.
10:38 pm

and the hosts egypt lead dr congo two—nil at the moment, their second goal was special. a great run from david trezeguet through the congolese midfield, before he set up liverpool's mo salah who did what he does best. a win tonight would put egypt through. to tennis, and preparations for wimbledon are continuing at the nature valley international at eastborne. it was an all british affair this evening as kyle edmund beat cameron norrie in the second round to move through to the quarterfinals. breezed through the match, winning in straight sets 6—2, 6—2. he'll face another brit, dan evans tomorrow for a place in the semi—finals. bad news forjohanna konta though whose patchy grass court form has continued ahead of wimbledon. she was beaten today in the third round of the eastbourne international. 0ns jabeur of tunisia got the better of the british number one in straight sets. konta has just five days to get ready for wimbledon now — where she'll be seeded 19th.
10:39 pm 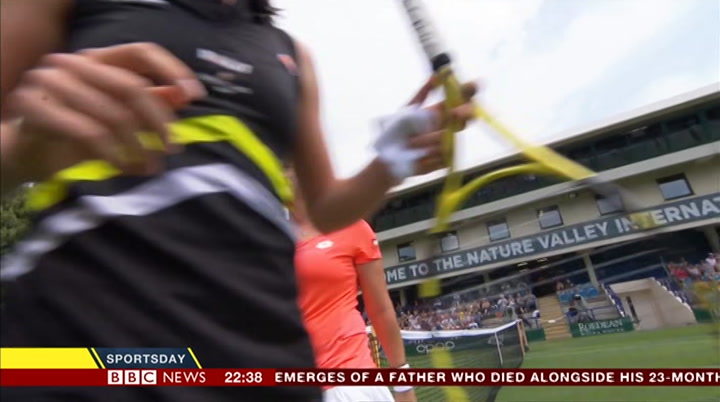 idid quite i did quite a few things well, not too much to feel too down about, disappointed that i would've liked to down about, disappointed that motivators stadia longer but to come to that match and find a way, yeah, i don't dwell too long on matches, i try to see the good things that i can do better and move forward. liam broady is one win away from qualifying for next weeks tournament at the all england club, he won his second round match today — he's bidding to reach the main draw for a fourth time. that's all from sportsday. coming up in a moment, the papers.
10:40 pm 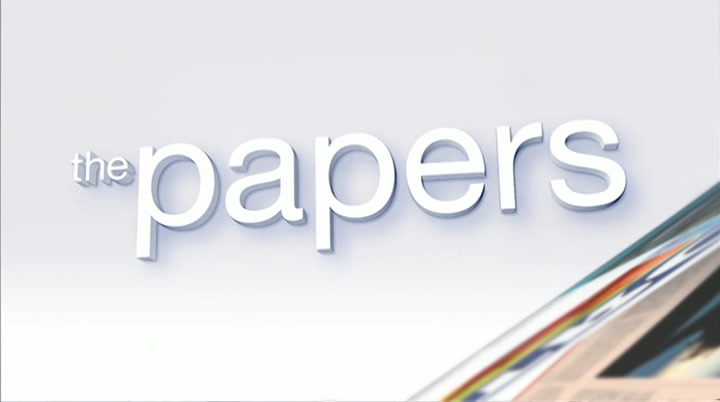 hello and welcome to our look ahead to what the the papers will be bringing us tomorrow. with me are former pensions minister, baroness altmann and mihir bose, the writer and broadcaster. many of tomorrow's front pages are already in. and before we show you them — a warning that some do show the photograph of the bodies of a father and his daughter who drowned attempting to cross into the us. the i leads on the conservative leadership race. it claims that 20 mps are preparing to block borisjohnson‘s plans for a no—deal brexit. but the metro focuses on borisjohnson‘s comments at a hustings event tonight that the chances of a no—deal brexit for the uk are ‘a million to one'.
left
right
email Borrow Program
tv