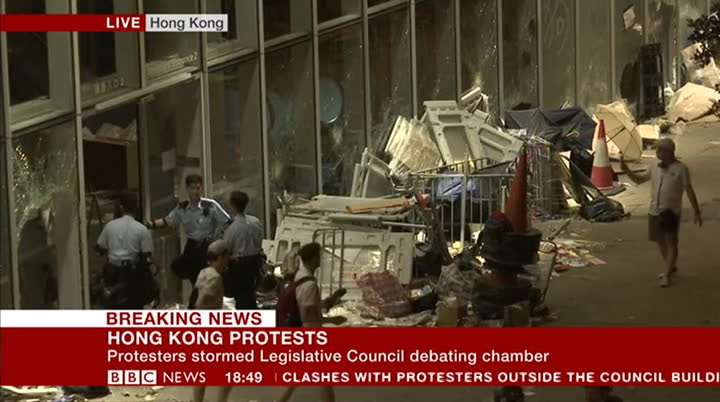 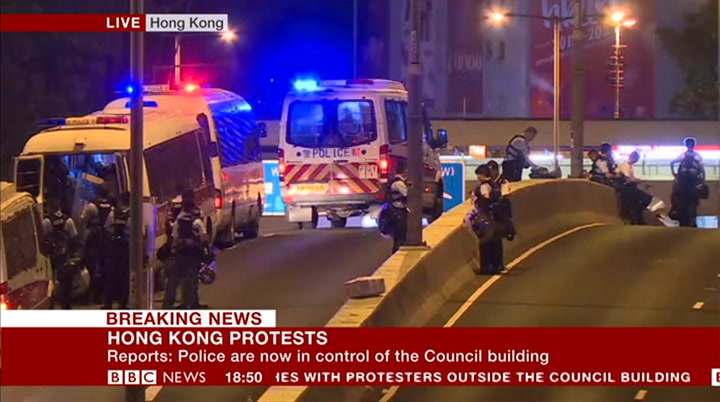 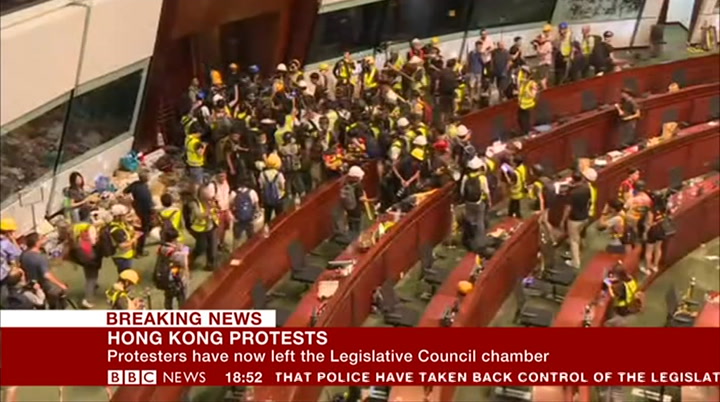 moment, but it could be 2047 by next year if we don't fight. so their pent—up frustration simply snapped. and that is what you saw in hong kong today. we are now seeing pictures of the protest is leaving the chamber. 0nce pictures of the protest is leaving the chamber. once the riot police had arrived they left voluntarily. i think to escape any kind of clash with riot police. what you make of the behaviour of these protesters? 0bviously they are impassioned, they are very angry, but clearly they have also done quite a lot of damage, a lot of graffiti, on the buildings and walls? nobody would endorse vandalism, and they could be facing all kinds of criminal charges, illegal assembly, criminal damage, etc. they are in general
6:53 pm 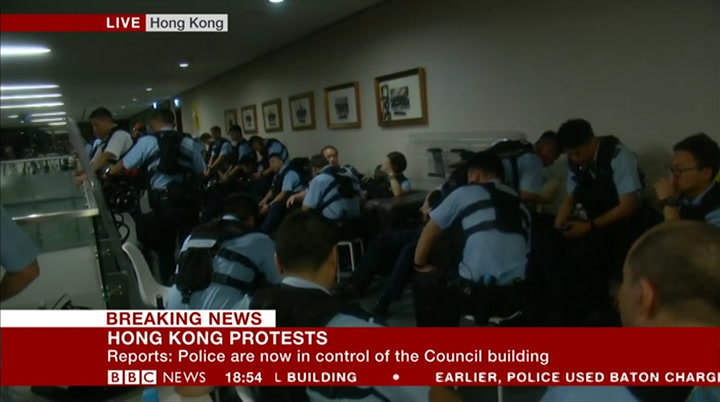 voluntarily within 14 minutes. just a bit more than half an hour —— within 40 minutes. they might be leaderless but they are actually fairly organised amongst themselves, students, groups, via telegram, chat rooms and things. they knew perfectly what they were doing. i tried to talk to a couple of the apparent leaders earlier in the day, and they told me not to worry, they said, i know you are concerned but don't worry about us, the government has pushed us this far, we have to do what we have to do, and they did it. very briefly, because we only have a minute or so left, how worried are you by what beijing will think of what has been happening today? and what will be the response of beijing? are they going to run out of patience? it is worrying,
6:55 pm 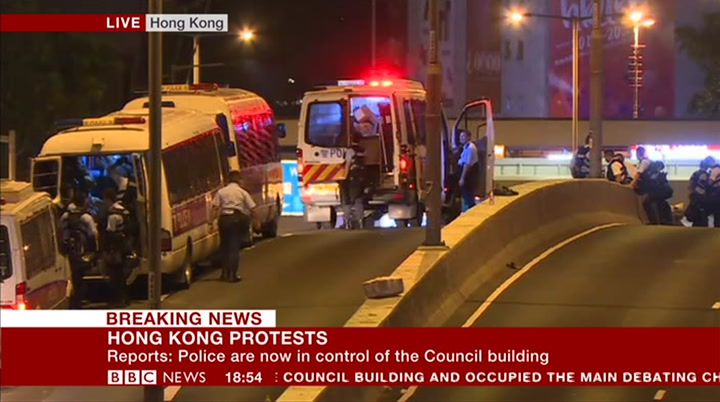 because since our umbrella movement five years ago we can feel the patient has been tightening its grip on hong kong, that they are fed up with hong kong, that we don't know how to be grateful to the mother country. etc, etc. and i am worried that they will tighten the grip even further. but then i hope beijing will also understand a lot has to—do with the city leader, carrie lam, as beijing put it. she started this entire trauma, this saga, whatever you call it, and she should pick up the pieces. and she should come out as soon as possible to tell hong kong people that she is sorry and
6:56 pm 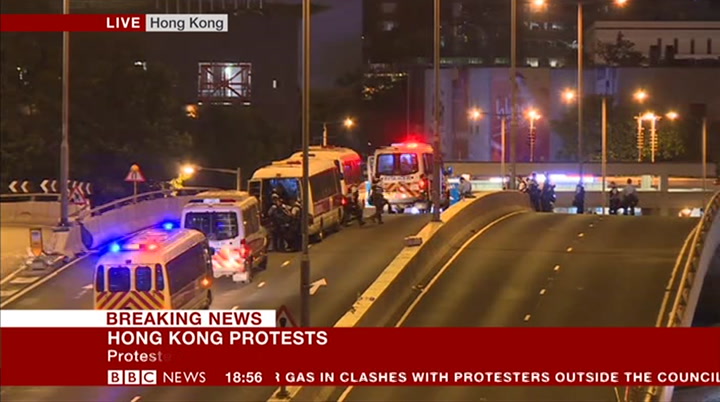 that she will make hong kong better. cloudier, i think we are out of time. thank you for being with us. extraordinary events in hong kong. you're watching bbc news. and as we continue to watch these live pictures, let's talk now to howard from bbc chinese, who is with me. some up how you see today is a really vital, crucial day in the history of modern hong kong, and a very dramatic day. very symbolic day of course. on july very dramatic day. very symbolic day of course. 0njuly one, the 22nd anniversary of hong kong cosmic handover back to chinese control and the chinese sovereignty, and you have a group of youths charging into the government building and defacing it. so that on the symbolism side is
6:57 pm

very much there. secondly, i am actually quite surprised how the police, compared to june 12, actually quite surprised how the police, compared tojune12, the previous protest, when they actually used many accused excessive force. today they were quite well—organised, a tactic of surrounding layer by layer and slowly pushing, forward, then firing tactical rounds of tear gas until they let the protesters leave, either with some type of agreement, which we don't know yet, or some type of arrangement. in a way, they awaited that type of feared bloodshed at least. to those of the two things that struck me as quite different today. the protesters are fighting, they want to keep hong kong's freedoms, such as they are, they don't want the extradition bill. it is the danger that if they go too far they risk real repression from the chinese mainland, from beijing, who will run out of patience for this kind of thing?
6:58 pm 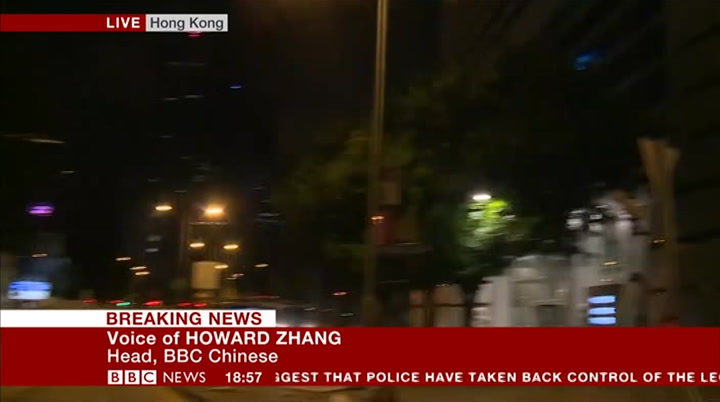 many scholars already are drawing parallels to 30 years ago, the tiananmen protest. at that time the protest started with mass protests and then later on the protesters seems to lose their way a little, demanding various factions come out and make different demands, and it leads to something eventually. but today, from the the way the students and young people were organised, it seems they do have a more nimble approach towards this. so let's hope this stays the way. and from the past few weeks, and from the umbrella movement, we can't quite see how this type of ending will lead to a major crackdown yet. but of course patient‘s encroaching, hardening position towards hong kong, it is gradual one, it is not like tomorrow we will take over hong
6:59 pm 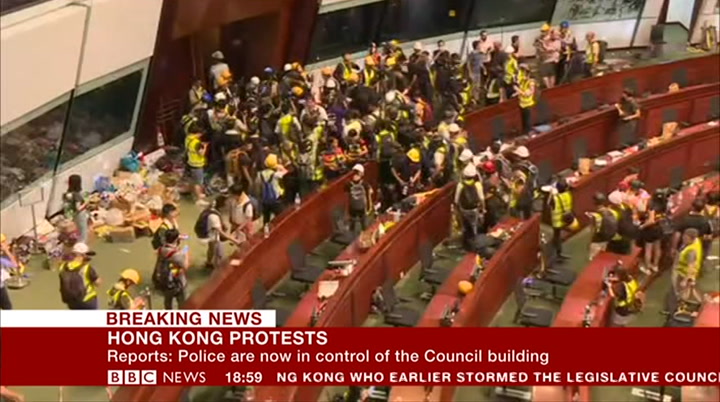 kong immediately, direct control, it is not that. but you can see more and more of a hardening of position. briefly, these protesters, they are very determined and angry, they will not stop soon, are they? tomorrow is the key to see how the police... tomorrow was a day after, how police will deal with those few people. if they have identified or will identify eventually the organisers i today's events. and that perhaps will be a turning point. howard, thank you, for the moment. we are looking again at the pictures from earlier on when the demonstrators who had occupied the legislative council chamber actually melted away, as you can see, council chamber actually melted away, as you can see, because council chamber actually melted away, as you can see, because the riot police had surrounded the building and were going to come inside. so this was a very dramatic day of protest in hong kong, is how it was saying. a pivotal, very symbolic day in modern history of hong kong. these protesters fight
7:00 pm 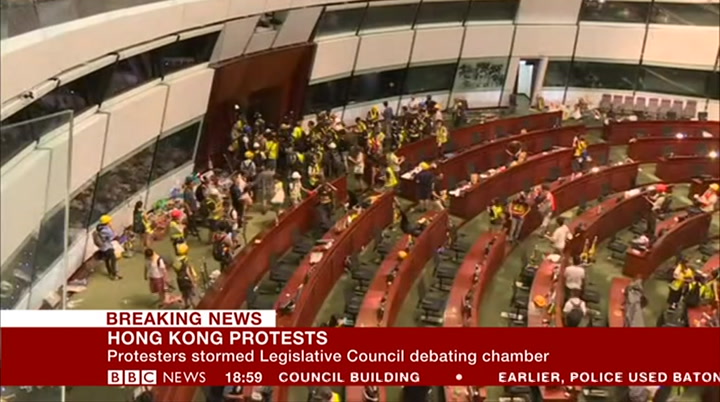 for their freedoms. hong kong. these protesters fight for theirfreedoms. we hong kong. these protesters fight for their freedoms. we will see what unfolds in the coming hours and days. you are watching special coverage on bbc news. you're watching beyond 100 days. police clash with pro democracy protestors in hong kong. demonstrators used a more aggressive approach this time as they took over a key government building. police have entered the parliament building to take back control and clear the protesters. the protestors smashed their way into the building — hundreds then entered and occupied the legislative council, our correspondent was on the scene. graffiti daubed on this particular desk. a computer screen that's been ripped up, papers removed.
left
right
disc Borrow a DVD of this show DVD
tv