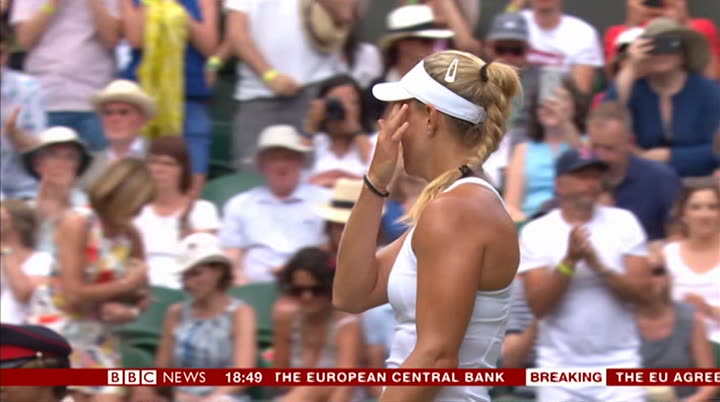 singles last year. the winner of the singles last year. an all—german affair. cuba reached the final at eastbourne last week. she is through. as is ashleigh barty, the current women's world number one, following her french open success. she is through. also coming through in straight sets. she is one of the favourites for the title this year following her success title this year following her success in paris. we have seen plenty of abscess in the men's singles and we saw another today. another of the next generation has gone. dominic thiem beaten by sam querrey. dominic thiem made it through to the french open final, beaten by rafael nadal. he was the only active player under the age of 28 to make it through to a grand slam singles final. with him going,
6:51 pm 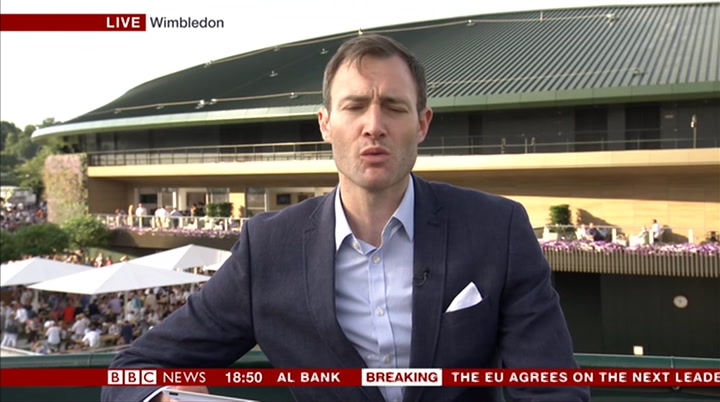 it has certainly opened for the big three. so, their women's world cup and wimbledon aside, it is going to bea and wimbledon aside, it is going to be a big day tomorrow for england's cricketers. after that much—needed win against india at the world cup, they need to produce another against new zealand tomorrow to guarantee themselves a spot in the semifinals of the competition, which is being played on home soil. welcome to the riverside, durham. you can see england's players training for the final time ahead of watches such a crucial match for them. they know that if they beat new zealand tomorrow, they are through to their world cup semifinals, but if they lose, there isa semifinals, but if they lose, there is a real possibility that later in the week they could be out. so it they could be out. so it's a world cup hopes are very much on the line here. that said, they should go into this match with renewed confidence after their impressive win against india at the weekend, but their
6:52 pm 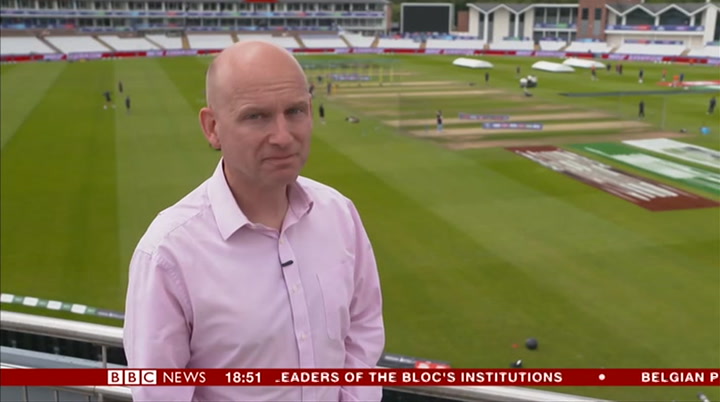 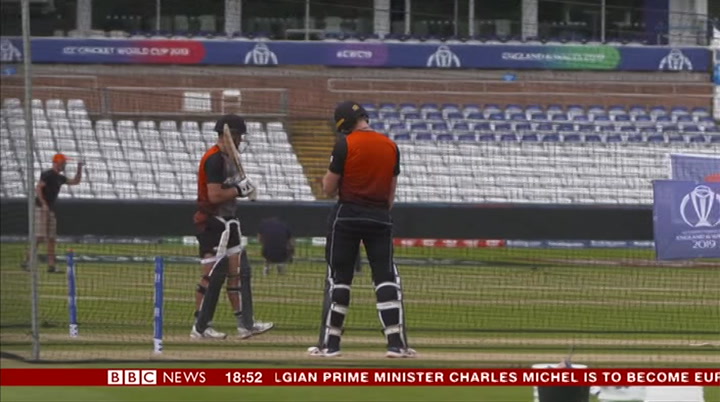 and they know they need to return to winning ways. i think the game was a little closer against australia than it looked. i think we had them under pressure at the start and we probably, you know, it was quite a tough wicket at lord's, but we definitely haven't got the momentum that we would have liked in the last couple of games but tomorrow is a different story against different opposition. new zealand hoping to rediscover their form but the pressure is very much on england. can they get the win they need to secure their place in the world cup semifinals for the fans? it could be a nerve—racking day. absolutely. more to come tomorrow. some worrying news for england ahead of the ashes. james anderson pulled up of the ashes. james anderson pulled up today with a strain. he suffered some tightness in his calf during
6:54 pm 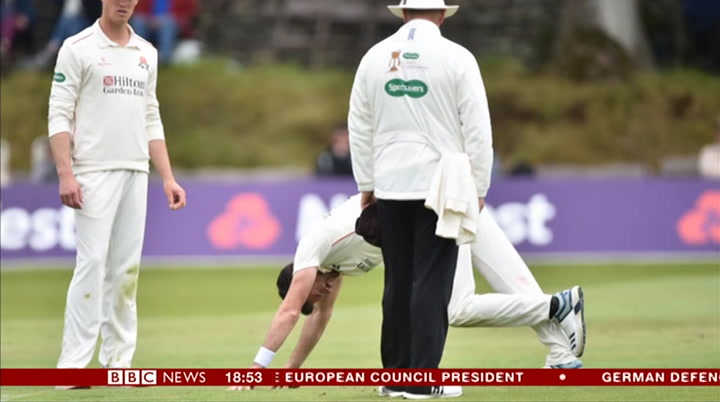 lancashire's county match with durham. he was running into a bowl, he pulled up, he had to leave the field. he will be assessed before the start of the ashes later this summer. the start of the ashes later this summer. let's return to the cricket world cup because india have beaten bangladesh today and that confirms their place in the semifinals. they beat bangladesh by 28 runs. rowe hit sharma hitting a century. bangladesh needed victory to keep their hopes alive but india confirming their place in the semifinals with a 28 run win. their women's ashes under way, the multiformat series started with 31 day is today and england in trouble already. —— one day. they we re trouble already. —— one day. they were 19—1; at one stage so a desperate start at one stage. they did manage to recover, scoring 177.
6:55 pm 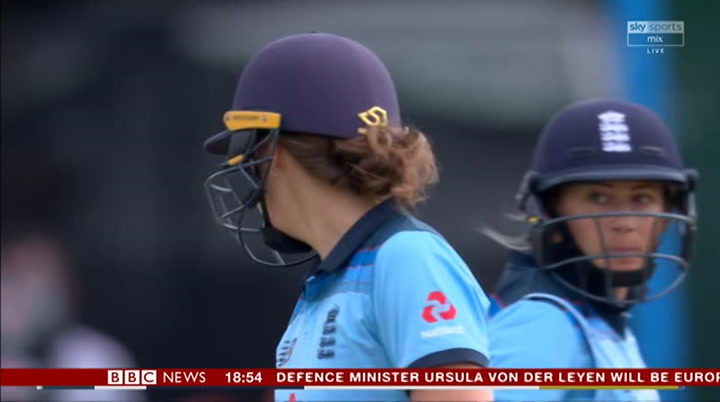 australia are 92—3, so they are looking likely. they should fancy their chances perhaps of beating england in that one. that is it from wimbledon on day two. let's go back to lyon as we edge ever closer to that big match to come. england in the semifinals of the women's world cup and hoping to do something they have never done before and reach the final. yes, just under an hour to go until we find out who will get to that final. will it be the usa or will it be england? we have team news. phil neville has made three changes to the side that beat norway 3—0. he started in goal because he has a drop karen bardsley to the bench and carly telford comes in. this is only her second world cup start. he also dropped fran kirby to the bench. and
6:56 pm 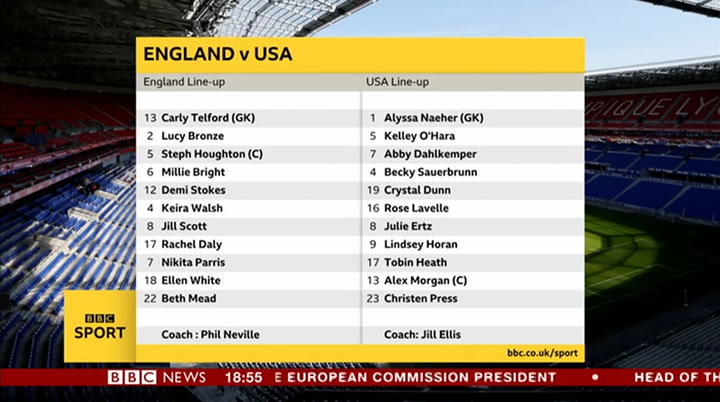 unsurprisingly, he has dropped toni duggan to the bench and brought beth mead and on instead. the big news comes from the usa team because they have made two changes to the side that beat france 2—1. but the big news from the us camp is that their talisman, megan, will not start. instead, kristen press will start. instead, kristen press will start. she has 121 caps but does she have the character and the enigma to match? you can probably see that their seats are starting to fill up
6:57 pm 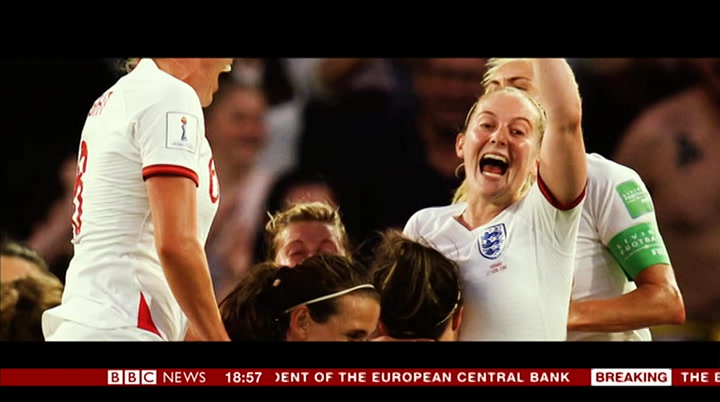 good evening. a lot of fine weather to come across the uk in the next few days. many of us will see the cloud filling in from time to time but it will be fair weather cloud building underan but it will be fair weather cloud building under an extensive area of high pressure. just thursday the chance of seeing some significant rainfall across northern scotland. generally, a dry picture. through this evening and overnight, we stay fine, we will see cloud from the day dissolving, and then turning quite chilly in rural wales, across the hills of northern england, and southern scotland. lows of three or 4 degrees. patchy mist or fog possible first thing. on wednesday,
6:59 pm 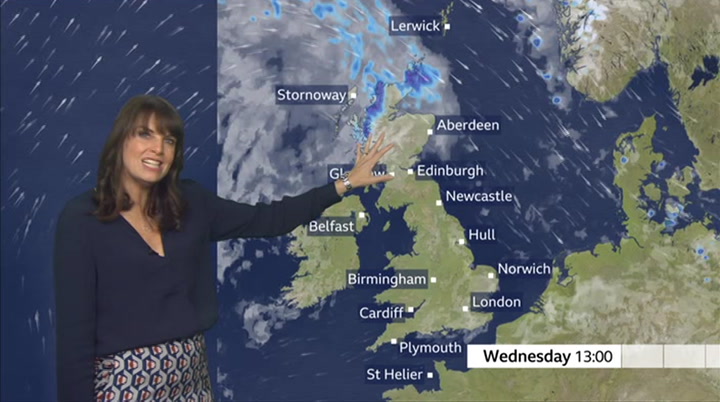 a lot of sunshine from the get go and we will see thicker cloud pushing into northern scotland during the day. more persistent but perhaps not especially heavy rain in the western isles and the highlands. heavy rain to come on thursday.
7:00 pm 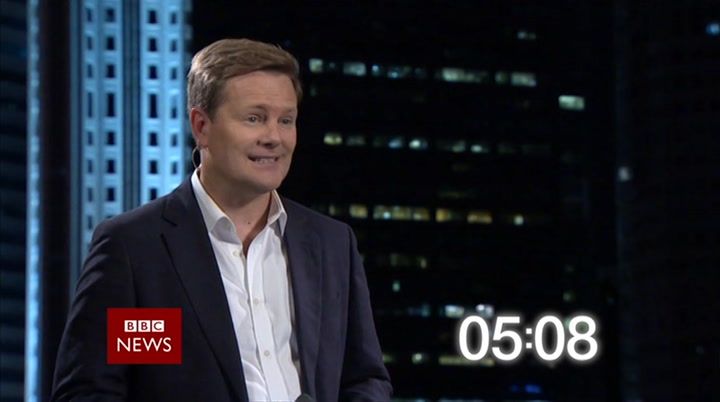 you're watching beyond 100 days. a semifinal showdown. in an hour, england take on the uac in the women's world cup. phil neville says he has been planning for this match since the day he took the job. —— usa. they are two of the best teams in the world, the united states with the firepower and in england's defence, the brilliance of lucy. it's a exciting time for me. i can't wait to go up against the best. after three days of talks, eu leaders have agreed the names that will fill the top posts in the eu institutions. we'll be live in
left
right
email Borrow Program
tv