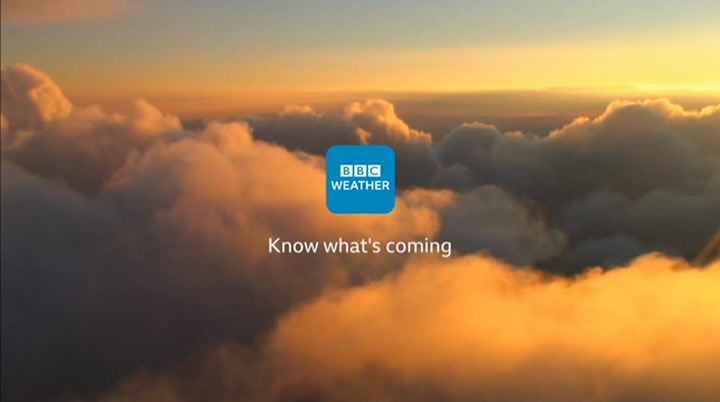 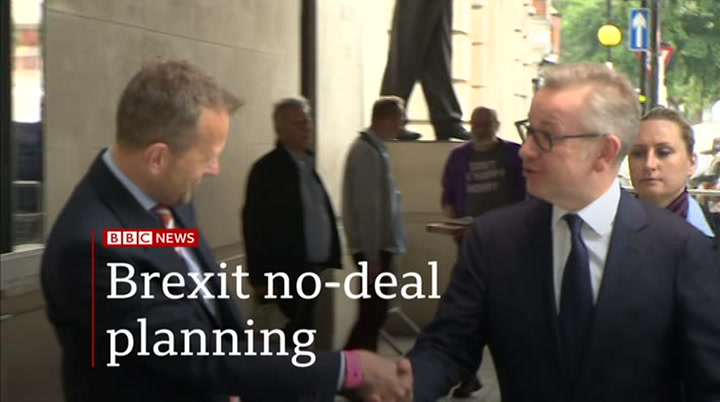 the government says it's ready for a no—deal brexit after claims there could be food, medicine and fuel shortages. ministers say the leaked details don't reflect current plans. this is an old document. since it was published and circulated, the government have taken significant additional steps to ensure that we are prepared to leave on october the 31st, deal or no deal. the search continues for 6—year—old lucas dobson, who's missing after he fell into the river stour in kent. coming up after sport, james king reviews quentin tarantino‘s latest release. now it is time for sportsday.
7:32 pm 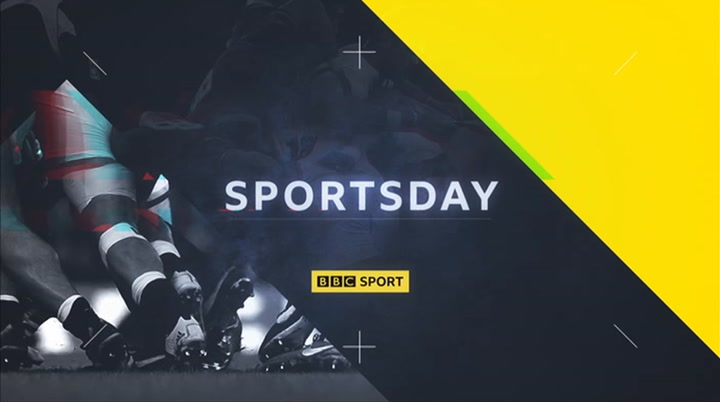 hello and welcome to sportsday. england just ran out of time. a draw in the second test at lord's after a fascinating fifth day's play. frank lampard is yet to win a match as chelsea manager, they could only manage a point in their first home game of the season against leicester. and smiles all round as britain's dina asher—smith holds her own in a star studded field at the birmingham diamond league. welcome to the programme. we start with the ashes where
7:33 pm 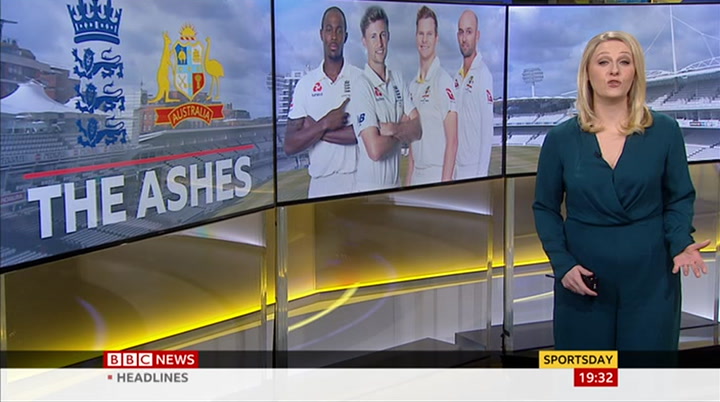 on the final day of the second test. england could not get australia all out. it ended as a draw as england ran out of time. jofra archer was on fire with the ball once again, taking two wickets in quick succession after england put australia into bat. they had declared on 258 for 5. michael redford reports on the day's play. ben stokes celebrating at lord's. deja vu, anybody? five weeks ago he guided england to world cup success. now he was giving them ashes hope. ben stokes resumed on 60 not out, england 96—4, a lead of 104. the plan, dig in. sort of. a plan that was being well executed untiljos buttler did this. a 90—run partnership brought to an end. stokes was far from finished. he went on to get a seventh test
7:34 pm 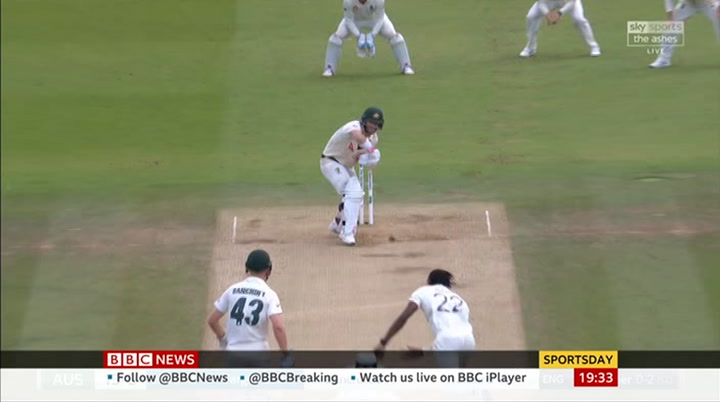 century. step forward another of england's world cup heroes. this summer, jofra archer has gone from relatively unknown to internationally feared. david warner gone early and no steve smith at the crease after he was hit by a archer delivery yesterday. his replacement got the same treatment. just like smith, the replacement managed to stick around, reaching 50. england's hopes of victory setting in the evening sun. when you need wickets, you must take your chances. 0h, dear, jason roy. jody denley showed them how it was done, a stunning catch to remove the australian captain, tim paine. fourwickets neededin captain, tim paine. fourwickets needed in seven overs. it was not to be and australia hung on, time ran out. the match was drawn. the next stop headingley. the australia batsman steve smith is not involved in today's action. he was ruled out after being
7:35 pm 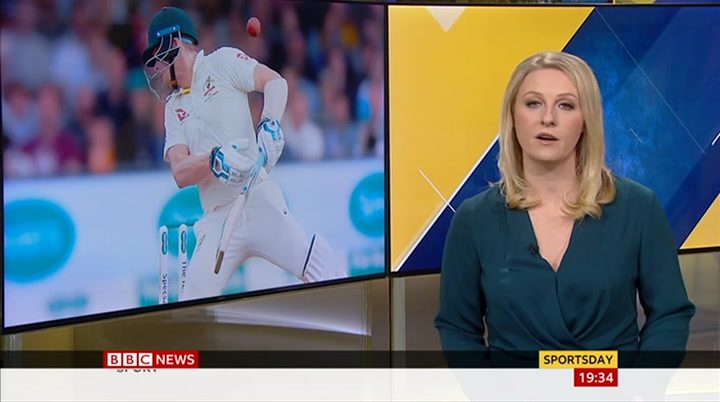 diagnosed with concussion. smith was hit on the neck by a ball delivered by jofra archer yesterday and was forced to retire hurt. he did pass concussion tests and returned to bat, top scoring on 92. tests this morning showed "some deterioration", according to cricket australia. i would obviously love to be out there, trying to keep performing, trying to help australia win another test match, but the right decision has been made. i will obviously be monitored very closely over the next few days, with a pretty quick turnaround in between test matches, and i am hopeful i can make a recovery and be ok for that. i have got to be able to train a couple of days out and then face fast bowling, to make sure my reaction time and all that kind of thing is in place. what about the guard? that was something that lots of people noticed yesterday, you're not wearing a guard? explain why you do not wear one, and whether yesterday's incident will make you reassess?
7:36 pm 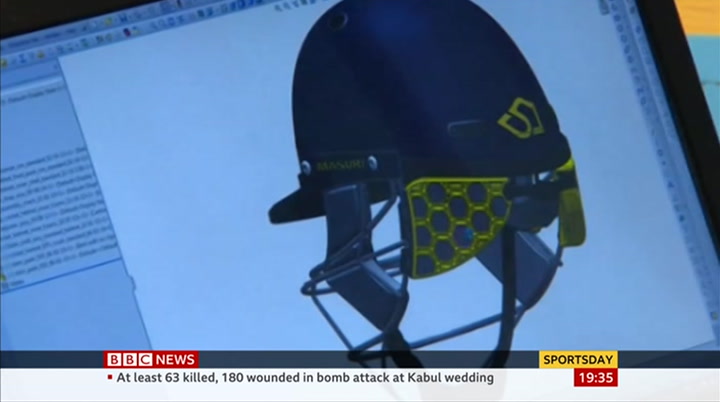 i, along with a few of the other players in the team, find it uncomfortable to what we are used to. ifeel a little bit claustrophobic. it is something i need to have a look at, and perhaps try in the nets, to see if i can find a way to get comfortable with it. football now and leicester took a point from their visit to stamford bridge with a 1—1 draw against chelsea. it was a mistake from leicester's wilfred n'didi which gave chelsea the opening goal but he soon made up for it. adam wild reports. frank lampard's legacy is written large all over stamford bridge. his playing past is unsurpassed but now the architect of chelsea's future. young mason mount may be a big part of that, goal on his home debut quite a start. chelsea should have
7:37 pm 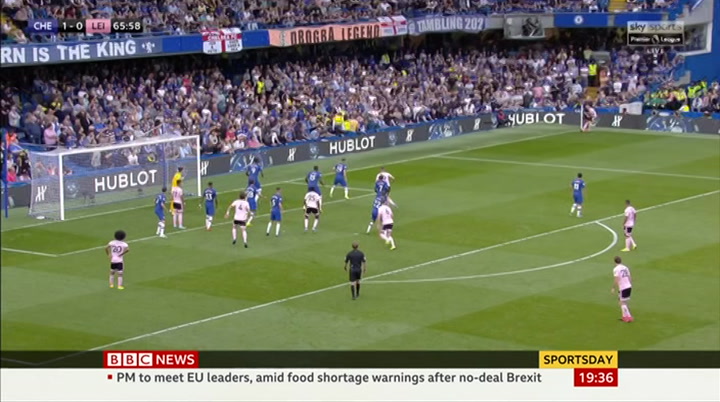 added more in the first—half. n'golo ka nte could not added more in the first—half. n'golo kante could not quite. after the break, leicester city in pink rose to the chelsea challenge. wilfred ndidi at fault for the first goal, making amends with the equaliser. leicester city could have won it had james maddison find the finish this deserved. jamie vardy also had a great opportunity. at times leicester looking the stronger. sharing frustration. for frank lampard, his first home game as manager, a draw at stamford bridge. this is home for me and i am here to doa this is home for me and i am here to do a job. i was very keen to take the moment and enjoy it. i really appreciate them trying to win the game. that will be my focus. i love the fact this is my club, i have played here so long and i want to do a good job. i am disappointed we did not finish the job and get the win but to send the fans home happy, thank you to them and we will keep working. frank will do great. he is
7:38 pm 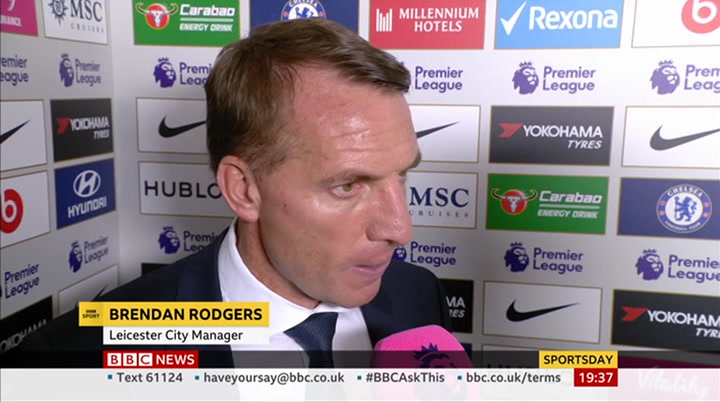 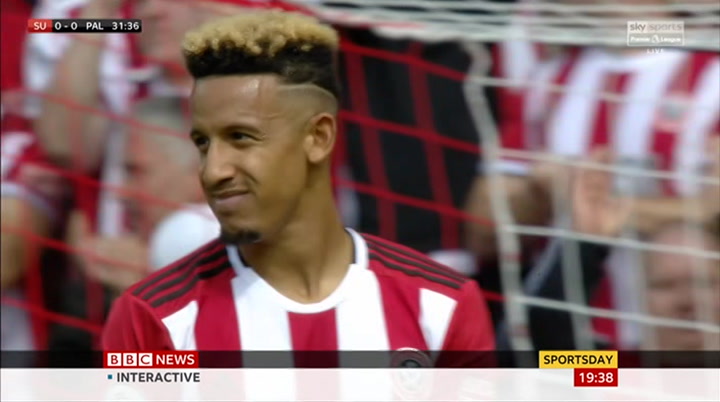 at the core of this team are players who have worked their way through the leagues. after this effort from callum robinson, david mcgoldrick got the next chance. last season he was their player of the year but he will still have to wait for a first top—flight goal. the first half made crystal palace look overwhelmed. soon they would lose sight of the blades altogether. among his former clubs are scunthorpe united and leyton orient. with this, the midfielder has scored in all four english divisions. crystal palace were one of the best away sides in the league last season but in their first two games of this one they have yet to score. as this match ticked away the new boys were holding firm. the man at the helm knows what it means. we have been out of the division for 12 years, it is a fantastic footballing city. we have had a great three years and we
7:40 pm 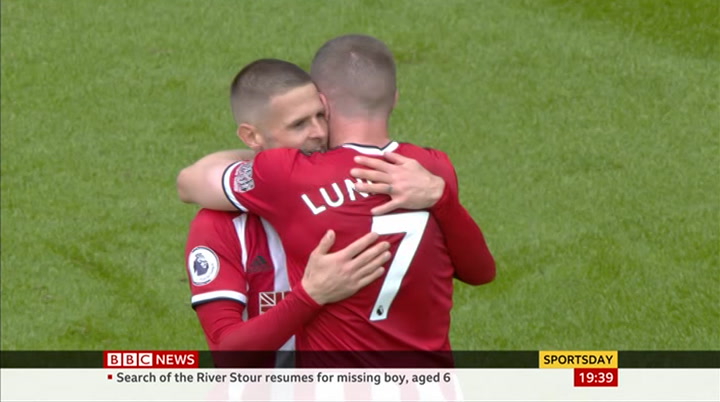 wa nted had a great three years and we wanted to continue but we are here to play and make it difficult for teams. we do not want to be the whipping boys. this team and these players have waited years for their chance. at bramall lane, no top—flight side will get an easy ride. former england, arsenal and chelsea left—back ashley cole has announced his retirement from professional football. the 38—year—old, who earned 107 caps for england, was out of contract at derby county. he is the most decorated footballer in fa cup history, having lifted the trophy seven times. in the championship, reading's first league win of the season came thanks to two goals from george puscas. puscas had signed for the club from inter milan this summer. they beat cardiff city 3—0. john swift with the third on the counter attack. rangers are through to the third round of the scottish league cup after a convincing 3—0 win over east fife.
7:41 pm 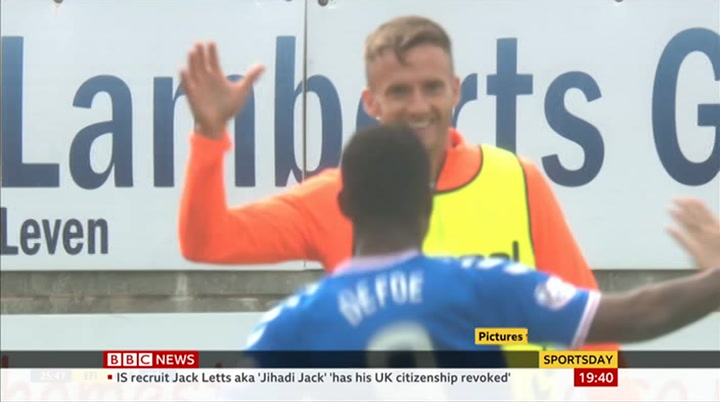 it was jermaine defoe with the first of the goals after 26 minutes. a good ball into him on the edge of the box, he turned and put it past the keeper. filip helander got the second. joe aribo with the third. britain's dina asher—smith has come second in the 200 metres, despite windy conditions at the birmingham grand prix. the double european champion put on an impressive display, beaten only by olympic 400 metre gold medalist shaunae miller—uibo. miriam walker—khan reports. the birmingham diamond league was supposed to be a warm up for next week's british championships, but warm was not the right word for the alexander stadium. at the long jump pit, it was red—hot. katrina johnson thompson and thiam.
7:42 pm 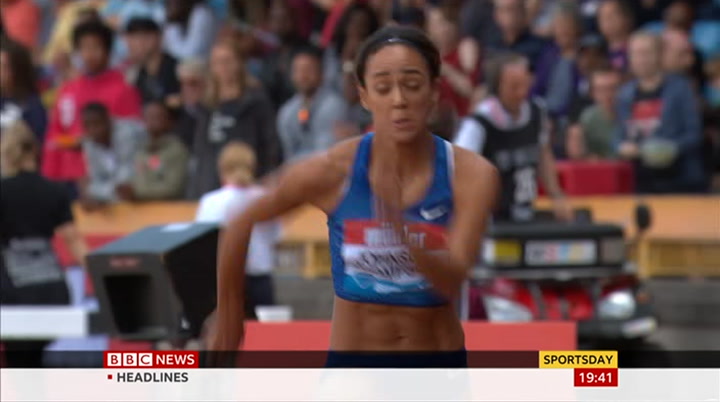 thiam came out on top, beating the olympic medallist. she showed what kind of form she was in. johnson thompson was in third but pushed all the way to a season's best performance. in the men's 800 metres, irishman mark english stormed past a field of six british athletes. in the women's, wilson took the victory from lynsey sharp. in the sprints, there were less british athletes but quality over quantity in the 100 metres. adam gemili was second to former world champion yohan blake. that bodes well for the world championships next month, but it was close to say the least, with only 0.1 seconds between first place and eighth place, about one metre. the event of the day was the women's 200 metres. dina asher—smith headlining a race so full of big names it could have been an olympic final. in the end, shaunae miller—uibo's 400 metre strength sealed it but today she
7:43 pm 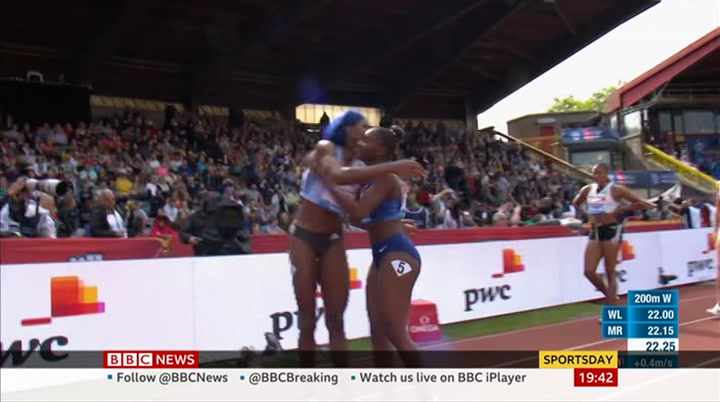 confirmed she will not be running the 200 metres at the world championships. something dina asher—smith and the british fans will be glad to hear. i was happy with howl i was happy with how i ran today. the competitor in me always wants to win but when you take a step back, that could have been a world or olympic final. it is a good thing. england's women have won their opening game at the eurohockey championships in antwerp. they beat ireland 2—1. giselle ansley‘s drag flick giving them their second goal. england's next match is tomorrow against germany, who thrashed belarus 13—0. in the men's game, england lost to belgium. england keeper harry gibson made a good save from a corner but they scored from the rebound. the second goal came in the second half, a smash into the corner.
7:44 pm 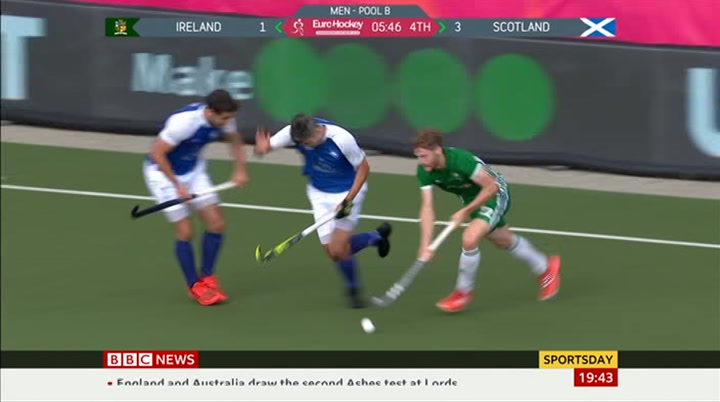 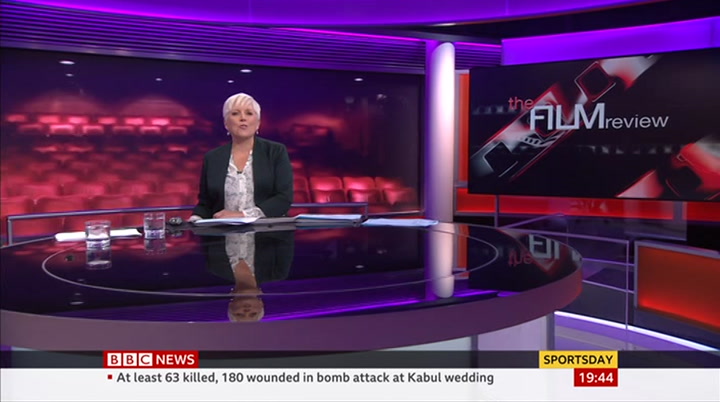 to take us through this week's cinema releases is james king. so james, what have we got? well, we have got leo, brad and margot, as i like to call them, teaming up for quentin tarantino's ninth film, once upon a time in hollywood. and dora the explorer goes from cartoon to live action and searches for the lost city of gold. and if you are desperate for a film where12—year—olds say disgusting things, you are in luck. good boys is also out. well, let us not start with the 12—year—olds, saying disgusting things, let's start in hollywood with quentin tarantino full stop how is it? it is just a lot of film. it is a film i have seen a couple of times, i am desperate to see it again. we go back to 1969 hollywood for this movie, a changing time. it was... we see the youth culture
7:46 pm