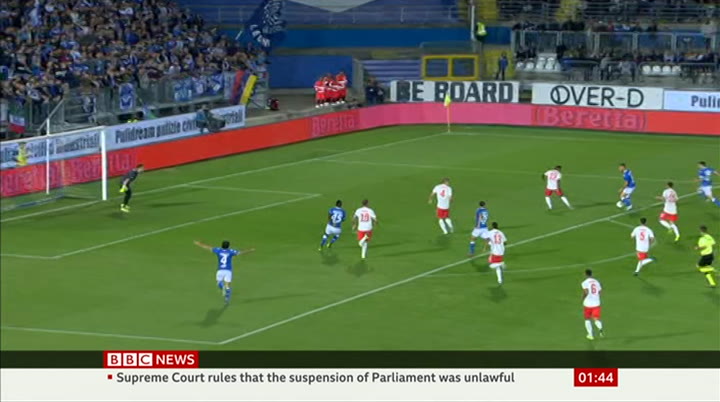 newly—promoted brescia take a shock lead against the mighty juventus, but the old lady fights back. successful start for samoa as they see off russia in their rugby world cup opener. we'll meet the three scandinavian siblings competing at the world athletics championships in doha. hello and thanks forjoining us on sport today. we start with football, and the italian championsjuventus maintained their unbeaten start to the new season by winning at brescia on tuesday night. that's four wins and a draw from their first five games. but they had to come from a goal down, after the home side took a shock lead through alfredo donnarumma after only four minutes. look at that for a finish! by half—time, juve were level when a cornerfrom paulo dybala was deflected in by brescia's venezuelan defenderjhon chancellor. midway through the second half,
1:46 am 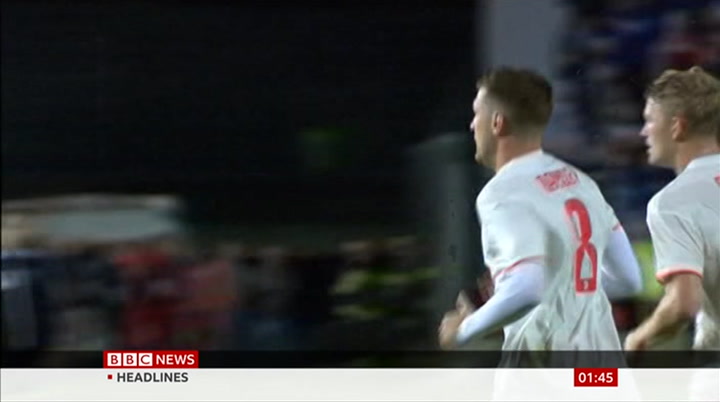 miralem pjanic won it forjuventus with a low drive fromthe edge of the penalty area. the win takes the champions back to the top of the table, a point ahead of inter milan. in the night's other game, verona were held to a goalless draw by udinese. both sides remain in the bottom half of the table. barcelona are back to winning ways following their shock loss to granada at the weekend. they beat villareal 2—1 at home, but something of a pyrrhic victory as they lost lionel messi to injury on his first start of the season. the newly—crowned fifa player of the year set up antoine griezmann for the opening goal but came off at halftime with a thigh injury. arthur had put barca 2—0 up before a santi cazorla goal pulled a goal back for the visitors. so just a third league win in sixmatches so far this season. but that victory drags barca up to fourth, one point behind surprise
1:47 am 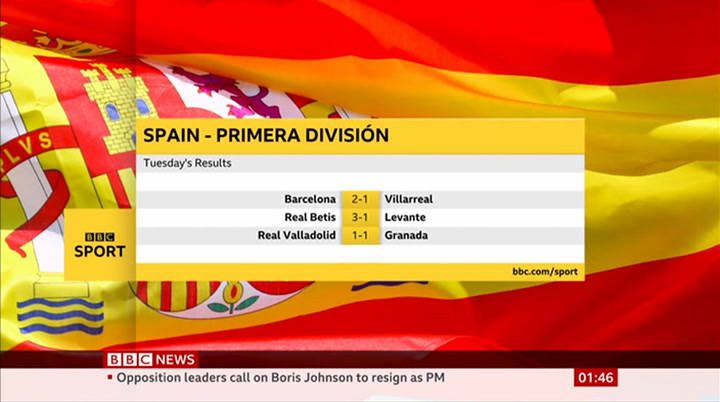 package granada whose draw at real valladolid was enough to send them top. real betis, meanwhile, beat levante 3—1 with two goals from loren moron who has five goals in five games now. a in five games now. shock result in the english leag cup a shock result in the english league cup on tuesday with tottenham hotspur, champions league finalists last season, beaten on penalties by fourth tier colchester united —— fourth tier colchester united —— fourth tier colchester united —— fourth tier tear. samoa have kicked off their rugby world cup campaign with a bonus point victory over russia in kumagaya on tuesday. russia led 6—5 at the break, after two penalties from yury kushnarev. the samoans were down to just 13 men for part of the first half, with rey lee—lo and motu matu'u both sin—binned for dangerous tackles. back to full strength after the break, samoa ran in five more tries, with alapati leiua completing a 3a—9 win. tough game. we knew that russia was going to come in that first a0 and
1:48 am 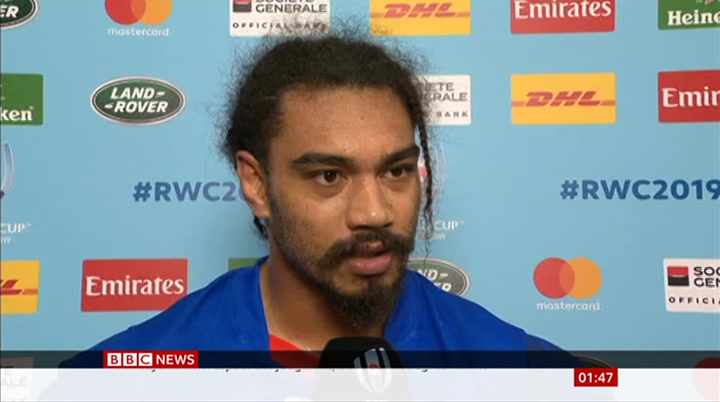 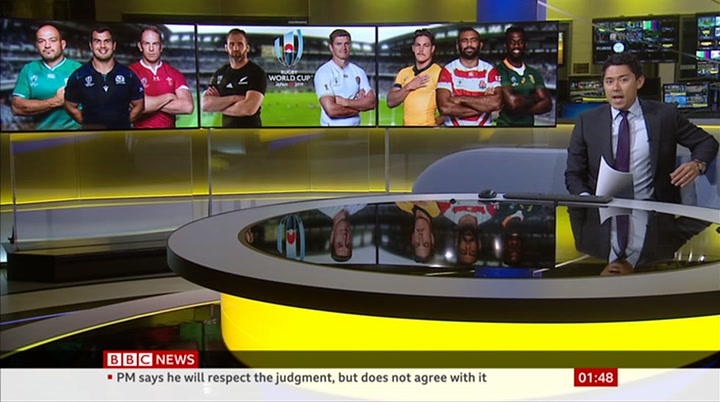 contenders who'll be in action at the rugby world cup when they face the usa in kobe on thursday. england's head coach eddiejones has made seven changes to the side that beat tonga at the weekend, but he'll be looking for a much better performance. andy swiss reports from kobe. well, welcome to england's team hotel here in kobe, where eddie jones hasn't surprisingly rang the changes with that quick turnaround after their opening match. after 15 —— of the 15 players who started against tonga, only five are starting against the usa. joe marler, tom currie, billy vunipola elliot daly and george ford, who ca pta i ns elliot daly and george ford, who captains the team with 0wen farrell starting on the bench stuffy plenty of other interesting names in that that starting xv, winger ruaridh mcconnochie makes his world cup debut, a remarkable feet for a man who was a seven specialist really until last year. also first world cup appearances for fellow winger joe cocker cocina and centre ps
1:50 am 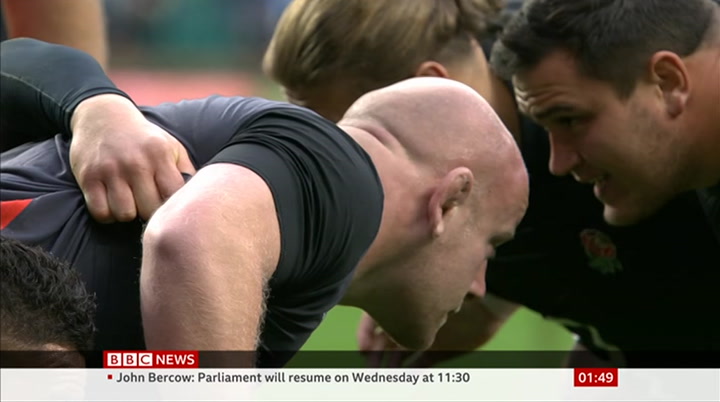 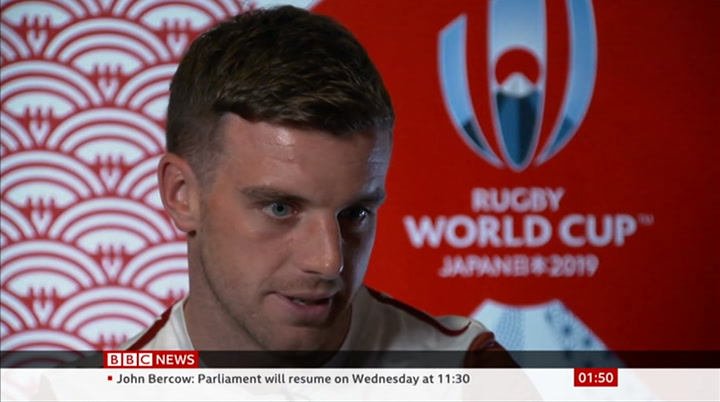 i'll try as always to do the job to the best of my ability on thursday, there's some great leaders in that 23, some starting and some coming off the bench as well. as always as pa rt off the bench as well. as always as part of the leadership group i'll try and guide this team to victory on thursday. despite all the changes, england will be overwhelming favourites to make it two wins out of two at this world cup. they last played the usa at the 2007 world cup where england w011 at the 2007 world cup where england won by 28—10. they'll perhaps be looking for something a bit more convincing than that here in kobe on thursday. now, all this week on sport today we're building towards the world athletics championships in doha, which get underway on friday. we'll have exclusive interviews with some of the stars from around the world, who are set to challenge for medals. we start with three long and middle distance runners. they're all from norway and they're all from one extraordinary family: jakub, filip and henrik ingebritzen. what what does it mean to be an
1:52 am 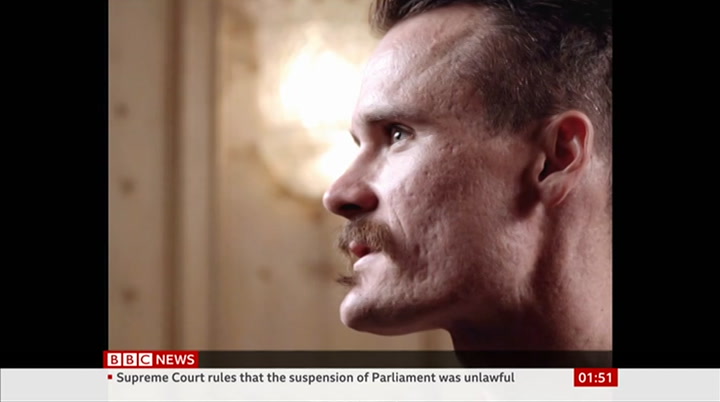 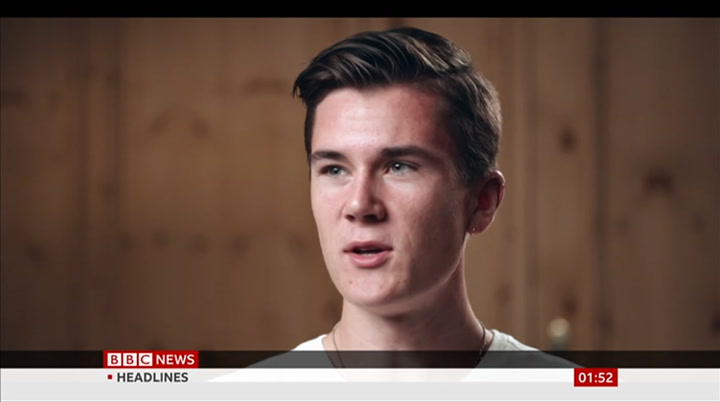 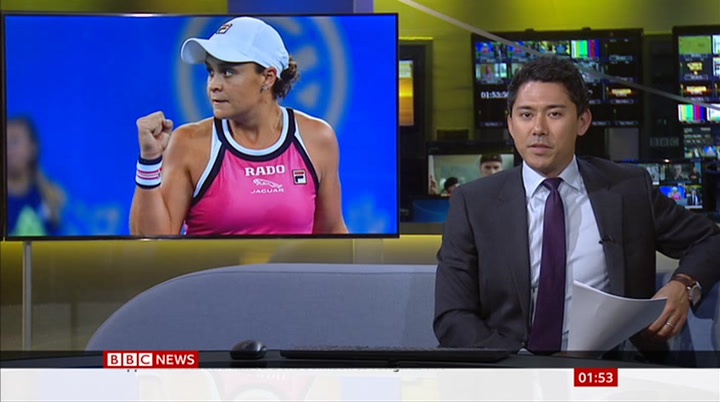 dreaming about medals. a round—up of the tennis now. the top seed ashleigh barty is through to the third round of the wuhan 0pen in china. but she had to come from a set down to beat the 2017 champion caroline garcia. the unseeded frenchwoman, who's ranked 23 in the world, took the first set 6—a, but barty won the second to level the match, and set up a decider. the third set was very one—sided, with barty taking it 6—1. the world number one will now face sofia kenin of the usa in the last 16. the number two seed karolina pliskova is also and staying in china, andy murray claimed his first singles victory on the atp tour since january to reach the second round of the zhuhai championships. murray was up against tennys sandgren, who beat him in winston—salem last month, but murray avenged that defeat with a hard—fought victory in three sets against the american. the former world number 1 winning 6—3, 6—7, 6—1, and will now face australia's alex de minaur.
1:55 am 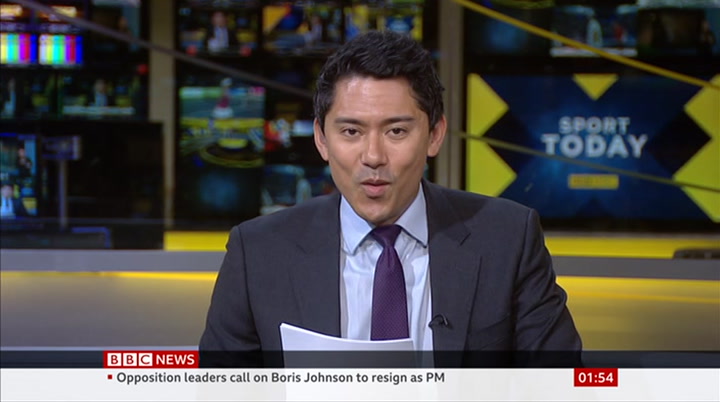 that's all the time we have for now. you can get all the latest sports news at our website, that's bbc.com/sport. but from me, marc edwards, and the rest of the sport today team, goodbye. hello there. well, september had been on course to be a dry—looking month across the south of the uk until our most recent spell of very unsettled weather. now, yesterday we had this area of low pressure bringing heavy rain, some thunderstorms mixed in with that. some really heavy downpours, actually. it caused some localised surface—water flooding. that was just one of the storms, quite near the bbc around the oxford circus area in london. now, in boscombe down in wiltshire, they recorded 59mm of rain over the space of around about the last 2a hours. that's exactly a months worth
1:56 am 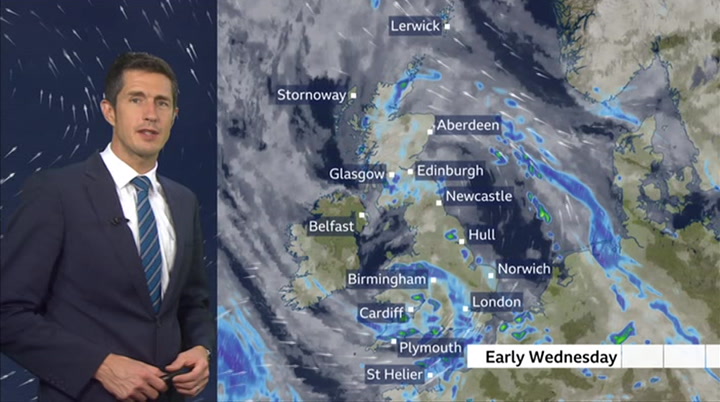 of rain, and with more rain in the forecast, of course, now september, for a number of us it's going to be much wetter than normal. well, here we are. the rain continues to moving across the south of england, southern parts of wales. gusty winds around english channel coast, gusting around 30—a0mph. the winds a little bit lighter for the northern england and scotland but we still have rain around here as well. to wednesday, our area of low pressure will eventually start to pull away and the weather will get a little bit less soggy for a time, although there'll be showers before the next weather system works in from the west through the afternoon. so, rain at times probably best sums up wednesday's weather. the rain with strong winds across southern coastal counties of england initially. the winds eventually calming down through the afternoon. the skies trying to brighten up but again, there will be some heavy showers around. then we've got the next area of rain that's going to work its way into northern ireland as we go through wednesday afternoon. temperatures, 18, 19 degrees, not feeling particularly cold, but on into thursday's forecast now, the next area of low pressure follows in quickly. sets of weather fronts
1:57 am 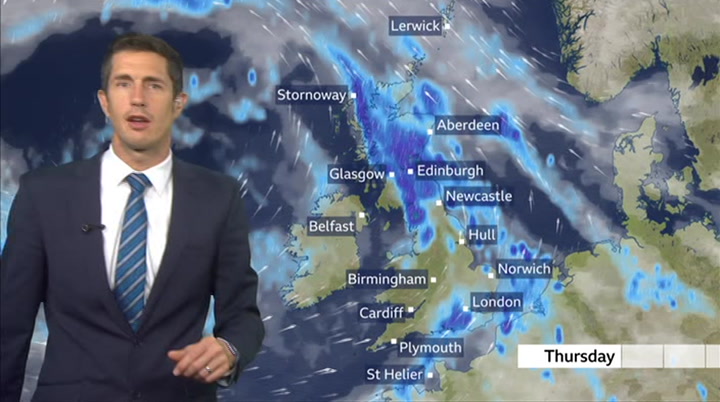 moving across the uk followed by south—westerly winds. those winds still bring a lot of cloud and still a lot of showers, so even as the rain clears its way through, the skies brighten up for a time but further showers come in and those showers again could be heavy with some thunder mixed in, so some heavy downpours to come at times during thursday. temperatures, well, just falling a few degrees across scotland and northern ireland, the air turning a little bit cooler here. england and wales, little overall change, 18 or 19 degrees the top temperature for thursday. friday's weather, well, it's another unsettled day, more rain pushing its way northwards and eastwards across the country again followed by showers through the afternoon, some of those heavy and thundery. temperatures friday afternoon, well, again, the coolest weather across scotland and northern ireland, 1a or 15 degrees celsius here. so feeling a little bit cooler in the wind. further south, england and wales, temperatures coming down a little bit across western areas with highs of 16 in cardiff. 0n into the weekend, well, it stays unsettled, stays quite windy with showers or lengthier spells of rain at times. that's your latest weather.
1:58 am 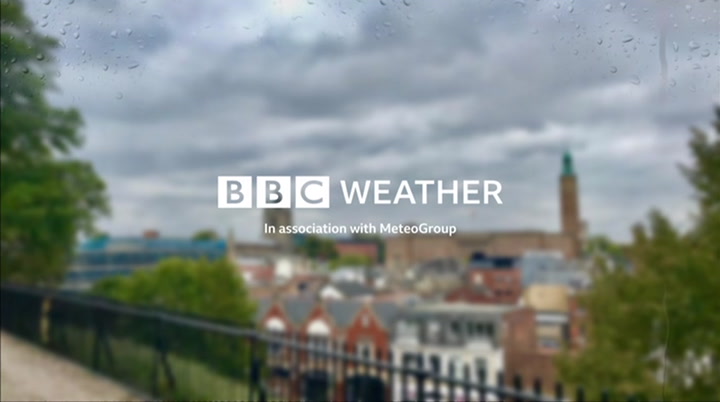 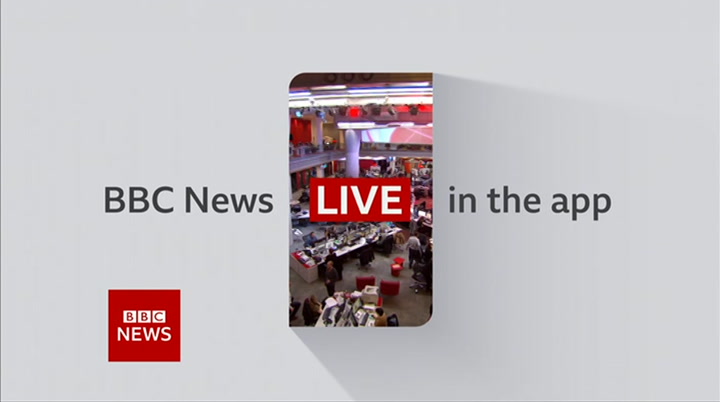 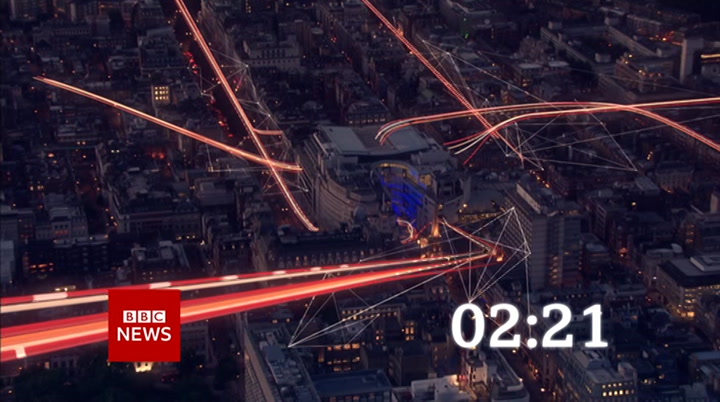 welcome to bbc news, i'm mike embley. our top stories: president trump faces a formal impeachment inquiry over allegations he asked a foreign power to help damage a political rival. senior democrat nancy pelosi says he's violated the constitution. the actions of the trump presidency revealed the dishonourable fact of president trump's betrayal of his oath of office, betrayal of our national security and betrayal of the integrity of our elections. the uk's supreme court rules borisjohnson‘s suspension of parliament is unlawful. he claims the verdict is wrong but says he will respect it. thousands more british holidaymakers are brought home following the collapse of thomas cook. ten more days of emergency flights are planned. and on their tour of south africa, the duke and duchess of sussex visit
left
right
disc Borrow a DVD of this show DVD
tv