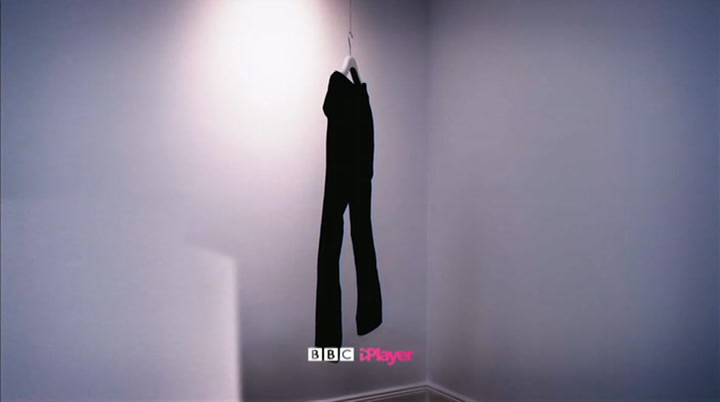 hello, this is bbc news. the headlines: sajid javid tries to steal a march on the labour party by promising a significant rise in the national living wage. it is clear that it is the conservatives who are at the real party of labour. we are at the worker's party. meanwhile the prime minister is forced to deny an allegation that he groped a female journalist at a lunch two decades ago. the saudi crown prince mohammed bin salman accepts some responsibility for the murder ofjournalist jamal khashoggi but says he had no involvement in it.
6:31 pm 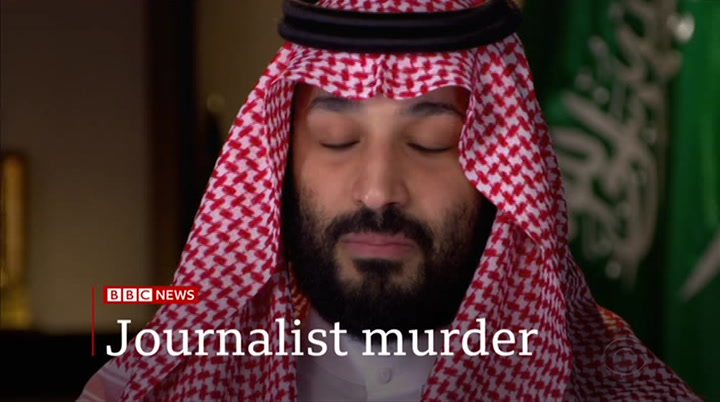 prince harry pays tribute to a british soldier killed trying to stop poaching in malawi. in a moment it will be time for sportsday but first a look at what else is coming up this evening on bbc news... in the next half an hour on beyond 100 days we'll hear from jeff blake, former us senator, over the impeachment inquiry into president trump. at 8.30 we'll be getting reaction to sajid javid's spending announcements from ben zaranko from the institute for fiscal studies and paul waugh from huffpost uk. and at 10.40 and 11.30 we'll be looking at tomorrow's front pages with the brexit commissioning editor at the telegraph, asa bennett and political writier and acedemic, maya goodfellow.
6:32 pm 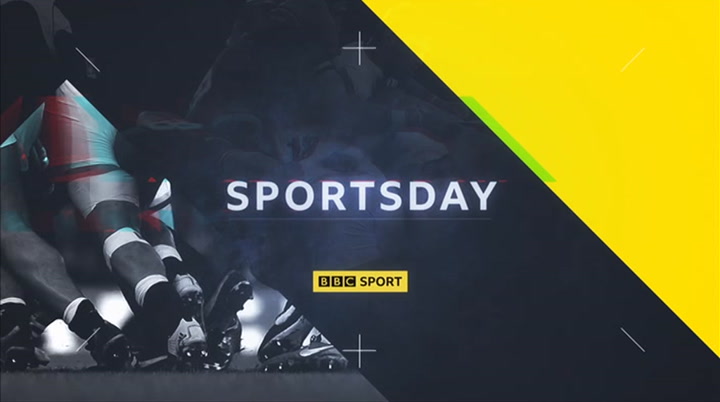 hello, i'm 0lly foster, here's what's coming up on sportsday tonight. the power of scotland. they're too strong for samoa, a bonus point win keeps their rugby world cup alive. dina's at the double in doha, 100 silver last night, now she's quickest in the 200 at the world athletics championships. cardiff are told by fifa that they have to pay the first installmenet of emiliano salas transfer fee. the striker who died in a plane crash shortly after joining the club. also coming up in the programme... big night at old trafford coming up, but manchester united against arsenal isn't as big as it used to be. and johnny be good. rae makes superbikes history with his fifth world title in a row.
6:33 pm 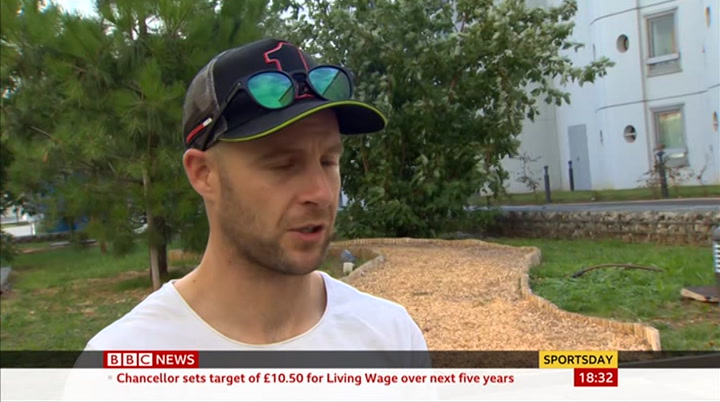 we managed to regain my composure and round by round we have come back, and to do it two rounds out already is mad. evening. 8 days ago, scotland were at an all time low after being taken apart by ireland in their rugby world cup opener. this morning they knew that they had to beat samoa to keep their fate in their own hands. they did that very comfortably, with a bonus point as well. 34-0. our sports correspondent katie gornall was the match in kobe. there was so much pressure on scotla nd there was so much pressure on scotland coming into this game against samoa, defeat was not an option and they knew they had to win and score four tries in the process
6:34 pm 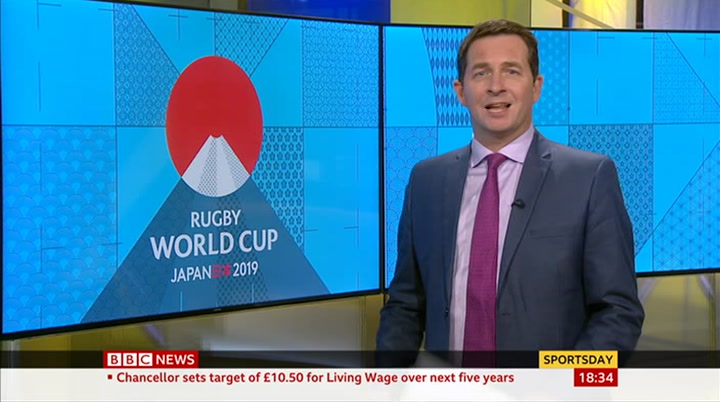 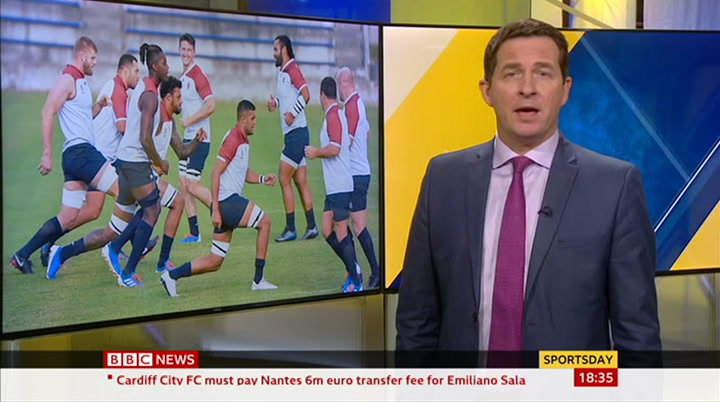 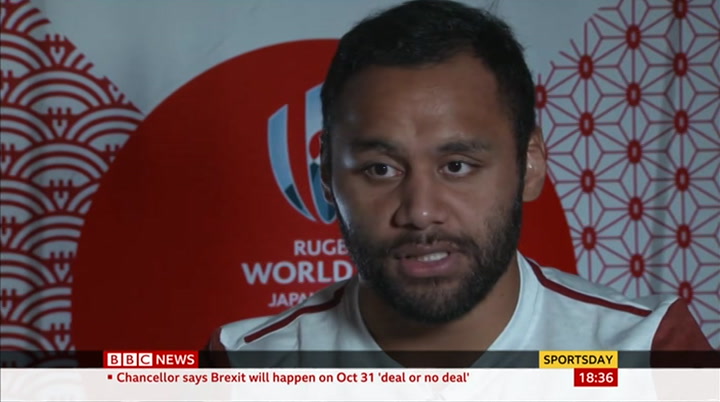 unbelievably well, and i think there is a lesson in that for us. we are pumped after these two games but we know argentina are going to come in hot. they have already lost one so we don't want to be in a position where we are scrapping. this is massively important for us as a group. that japan victory was a real highlight of the tournament so far, u nless highlight of the tournament so far, unless you are in the island camp. —— ireland. they should still go through the the quarters with russia coming up on thursday in kobe, followed by samoa, but how have they reflected on that defeat over the past couple of days. we have to make sure we keep up the process , we have to make sure we keep up the process, when we sit down, the attack plan and make sure we keep consistency. we drive ourselves with our standards and we lost a couple of key moments here and there, and
6:38 pm 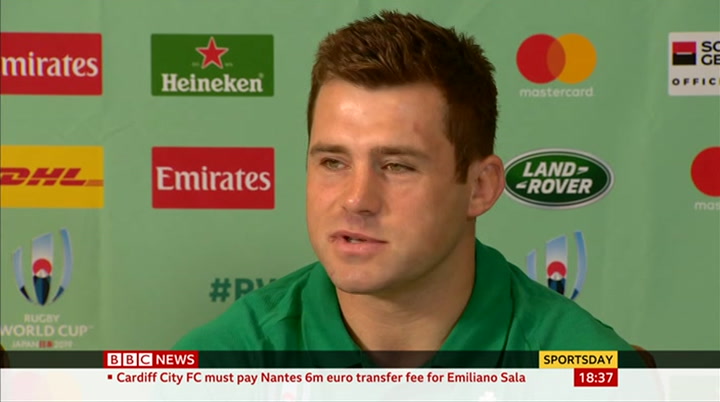 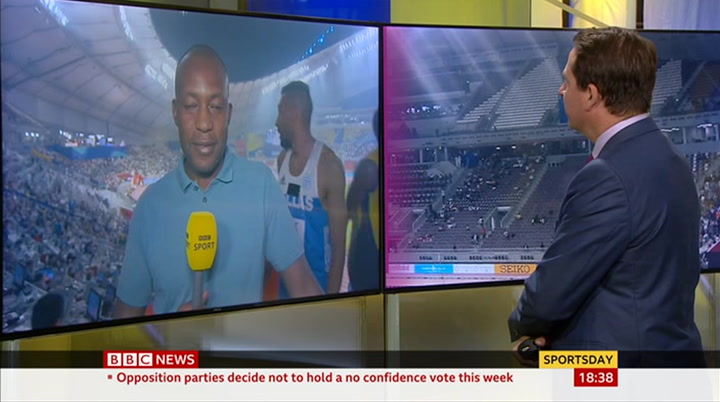 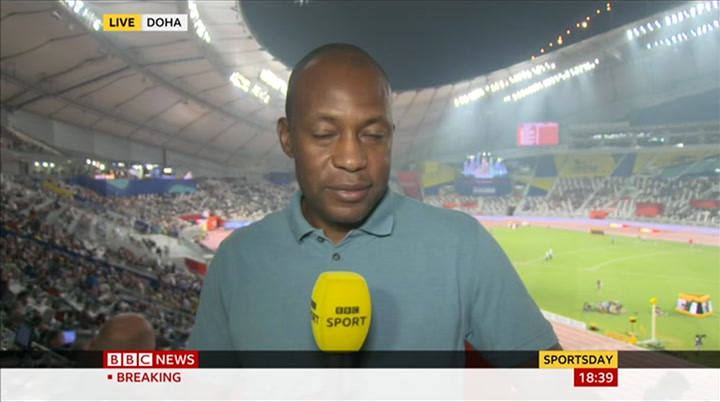 seats but last night, to say the crowds were sparse, that is being quite kind, isn't it? what have the local organisers had to say because it has looked pretty embarrassing. they put out a statement to say they acknowledged the stadium has not been full for the event, the men and women's100 metres. they said a lot to do is with the start of the working week and they have made me need efforts to get more people into the stadium. they say part of the problem is the right times of the events and they say they are hopefully going to have more people in the stadium as the week progresses. the issue is this was a lwa ys progresses. the issue is this was always going to be a factor, they knew this was going to be a problem. i have been to the stadium before and it is neverfull. this is the pinnacle of the sport but yet when shelly—ann fraser—pryce became the first athlete to win four gold medals in a championship, she celebrated in front of empty seats.
6:41 pm 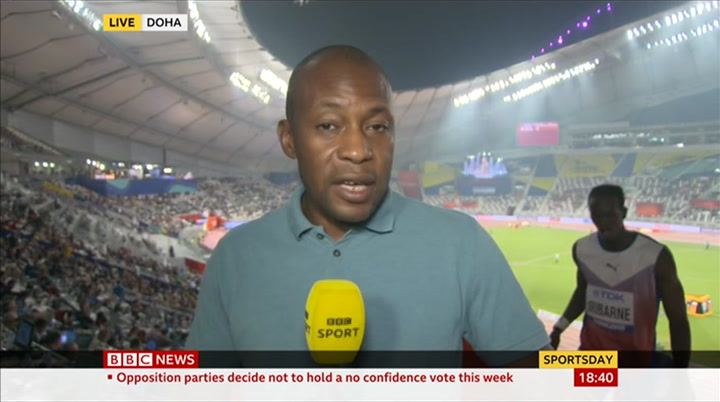 0ne celebrated in front of empty seats. one of the british team member said the situation is very disappointing. we are letting our product down to potential sponsors. this does not look good on television. anybody watching will think what should we support this sport going for it? please take a long hard look at our future because championships like this can be the crux and decided on why people want to invest in it.” think we get into the stadium and you see the pinnacle, men's and women's100 and no one is there, it isa women's100 and no one is there, it is a bad sign. be it diamond league or world challenge meet, it needs to be in places where they are going to sell tickets and make the sport look as good as it can be, because it still is an entertaining sport. there is still a lot to offer and we are shooting ourselves in the foot a little bit. yeah, not great for dina
6:42 pm 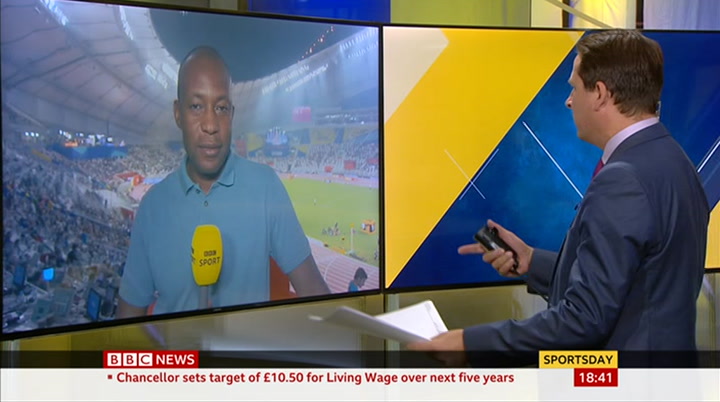 asher—smith and her lap of honour to an empty stand, nor to the champion shelly—ann fraser—pryce from jamaica. and she was written off a couple of years ago when she went away to become a mum. how sweet was it for her son there on her victory lap of honour? you have to start considering shelly—ann fraser—pryce as one of the greatest female sprinters of all time. she was 0lympic sprinters of all time. she was olympic champion in 2008, she didn't compete in london 2017 because she had her son many people wondered whether she would go back to the pinnacle of the support and compete against emerging talent like dina asher—smith and marie—josee ta lou. she talked about the challenges of having to compete on the diamond league circuit and leave her son behind is said to me yesterday, it was sweet to be able to celebrate such a momentous occasion but with her son and her husband. my son has
6:43 pm 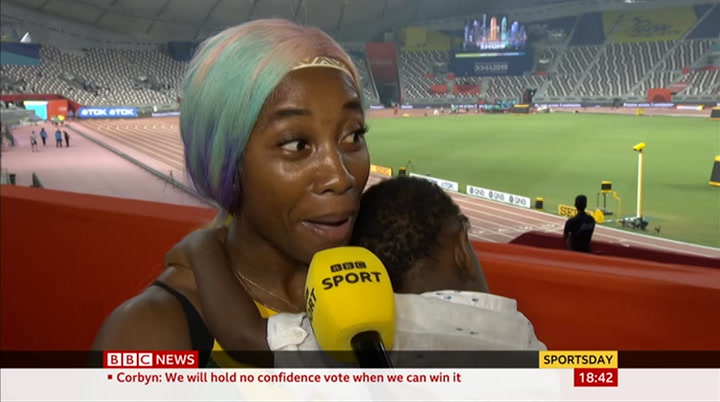 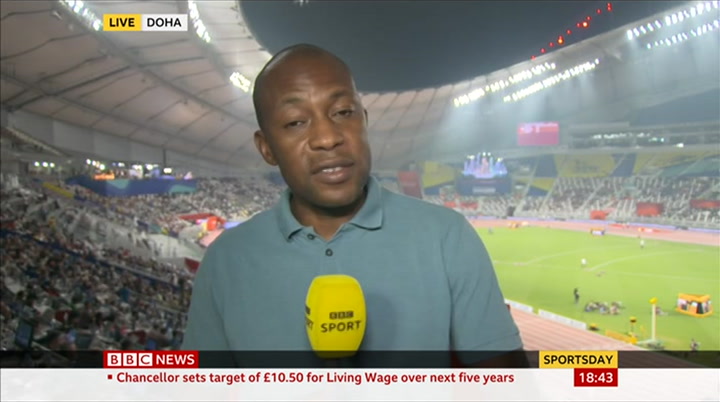 history and action. one of them has a huge home favourite which expose weight we might have more crowds in tonight. —— might explain why we have more crowds. in terms of the crowds, you are saying there my people here, there is also the 5000 metres and there is a big expat communities. canyons turned to tan —— canyons tend to turn up when the athletes are in action and that is what has generated this atmosphere. there is always a huge expat community in the diamond league and they are here in force tonight. thank you very much indeed. coverage continues on bbc two. there's one match in the premier league tonight, it's one that always used to raise the temperature and also have a say in the title. both clubs will hope that those days will come again. both clubs will hope that those it's manchester united against arsenal at old trafford. craig templeton reports it was the rivalry that defined an
6:45 pm

era. ferguson versus banga, keane versus the error, manchester united versus the error, manchester united versus arsenal. games that could side titles, doubles or even troubles. as a result both teams threw everything at each other, including the odd slice of pizza. fast forward 15 years and the power of the fixture has waned. maybe early in the season, but it is a 11th place against eighth. the man in charge of old trafford played in many of those great battles but insists scrutiny of his side does not affect him. i don't worry what the press writes about me or man united because we are focused on what we have to do that is to keep improving, and reading the papers, that doesn't really change my view will stop of course, i see them once ina will stop of course, i see them once in a while and sometimes my kids are asking, what is best about, and all that but that is part and parcel of this club. improvements were made to
6:46 pm 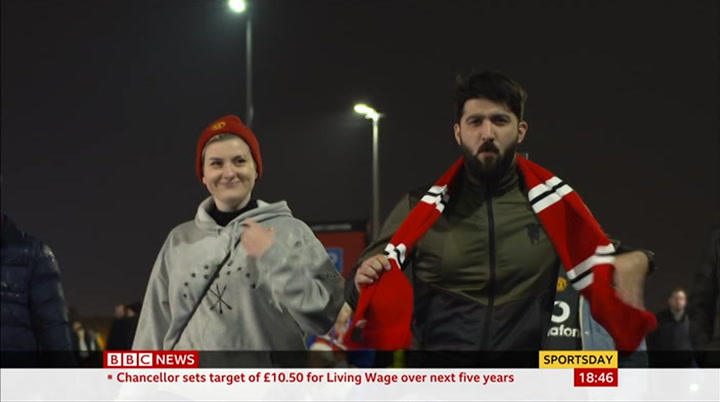 the squad this summer, bringing in the squad this summer, bringing in the likes of harry maguire and danieljames but the results have yet to follow suit. you need support, he needs to be allowed to build his own team but he also has to get results in the short term. this is manchester united. it has got to be better than that football has got to be decent as well. it is one of the biggest clubs in the world. the people in the circumstances may have changed but there can be no doubt it still matters. commentary of the match on 5 live tonight, ali bruce ball and former manchester united midfielder darren fletcher are there. good evening and welcome to old trafford where the rain is tumbling down and although it is not the titanic title deciding tussle it used to be, this fixture very much tantalises those football taste buds. it is manchester united
6:47 pm 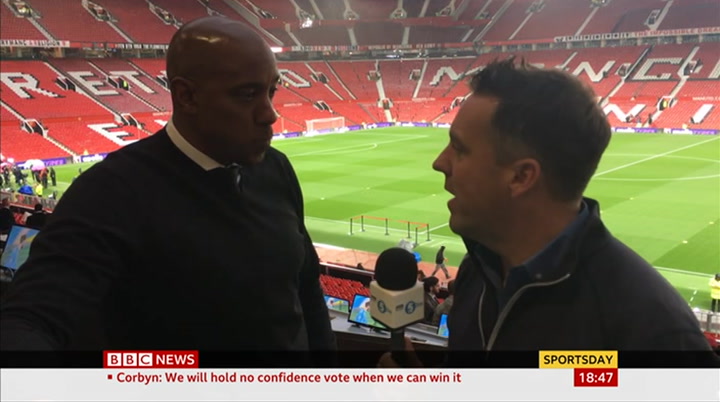 against arsenal. arsenal have not won here for 13 years. i think a lot of people would argue this might be their best chance any long time.” believe it is most teams in the premier league chance to come and get points because man united have been poor of late. arsenal come here and think to themselves, you know what, we have a chance. as bad as they have been, they have got a chance because man united defence has not been what is to be and they score goals. if anyone can say they have a chance. the coach has more -- the manager has more injuries to contend with than unai emery. just go on and enjoy yourself. there is pressure. but i trust you, here is your chance, get us a couple of goals, keep me in a job and i will be happy. it is the bigger picture, the long—term question. at the end
6:48 pm 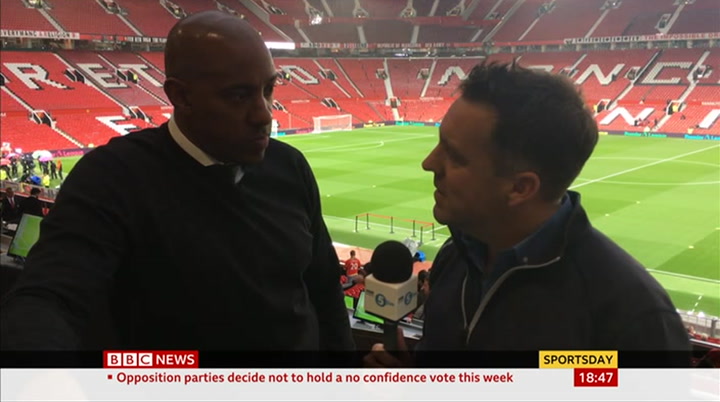 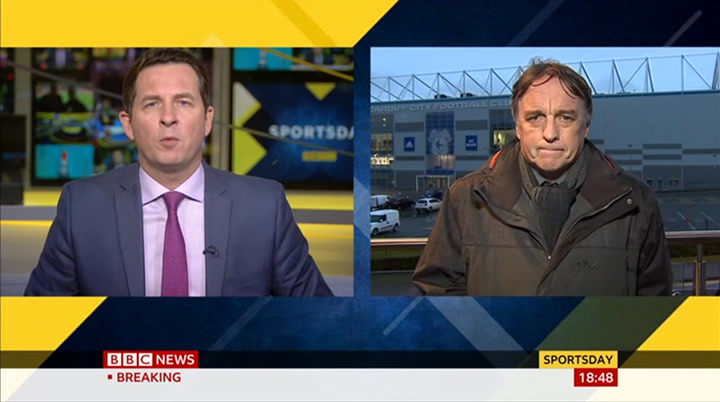 shortly after signing for the club. cardiff had argued long and hard that a revised contract for the player was never finalised so they we re player was never finalised so they were not liable to pay anything. cardiff contended that they do not have to make any payments because certain contractual obligations that we re certain contractual obligations that were requested by nantes were not fulfilled and it made the agreement now and avoid, but nantes contended they did everything, the paperwork was on time and today, a fifa who had asked the club is to negotiate between themselves, the clubs are not able to agree, today the fifa player statement committee decided cardiff city will have to pay the first instalment of £5 million towards the £50 million transfer fee. what we don't know what kind of
6:50 pm 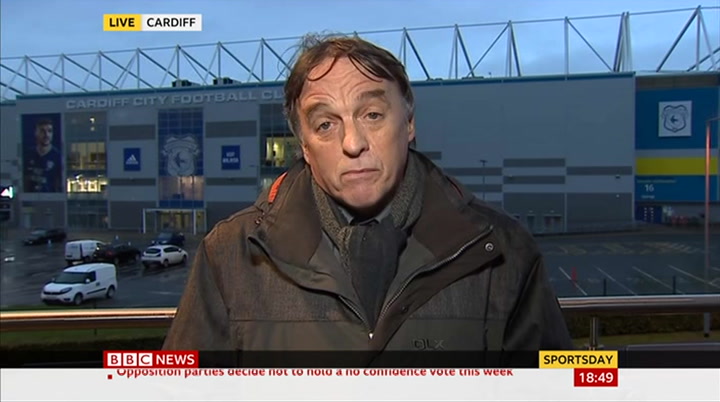