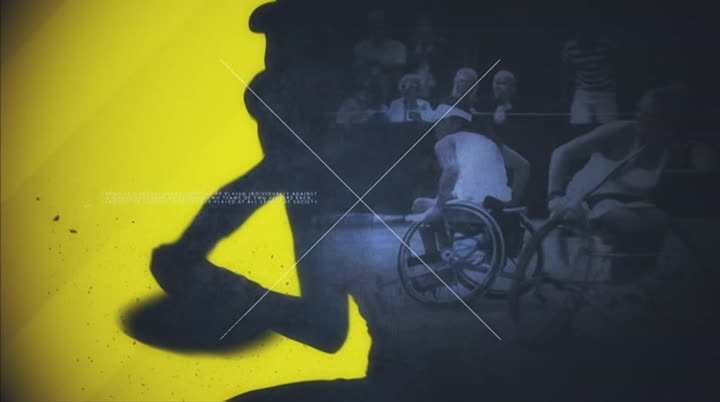 hello and welcome to the programme. it was a wet and miserable night at old trafford for a clash that would once have been billed as one of the highlights of the premier league season. instead, manchester united and arsenal played out a 1—1 draw that was as grim at times as the weather. nick parrott was watching. there was a time when manchester united knew how to get things done. following the... manager ole gunnar solskjaer remains chipper, perhaps because old trafford is arsenal's burma ground. they have not won the
10:31 pm 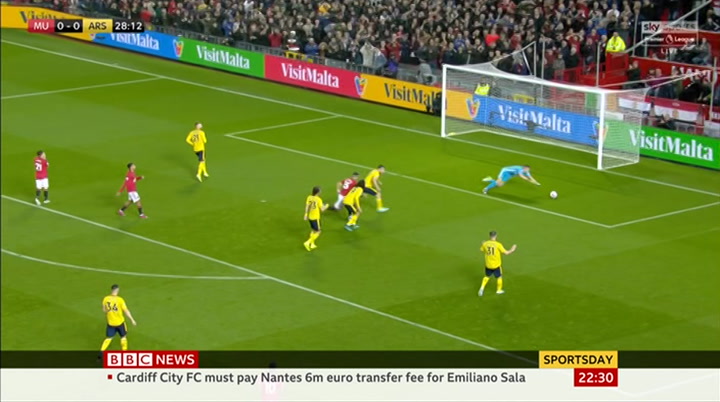 league since solskjaer was playing 13 years ago. the shot on target but the longest in the paris league this season, this slow burner soon warmed up season, this slow burner soon warmed up and true to form, it was united who opened the scoring. united were in the driving seat but were soon thrown into reverse. a sloppy pass and some quick reaction saw pierre—emerick aubameyang get arsenal back on level terms. his goal was initially ruled offside before ver came to the rescue. a point would move arsenal into the top four but arsenal needed more. they threw everything added. harry mcguire... marcus rashford closest of all. but none of them to get the job done. it was far from a classic, but despite still not winning, arsenal will be heading home happiest. nick parrott, bbc news. you wanted to take home three points
10:32 pm 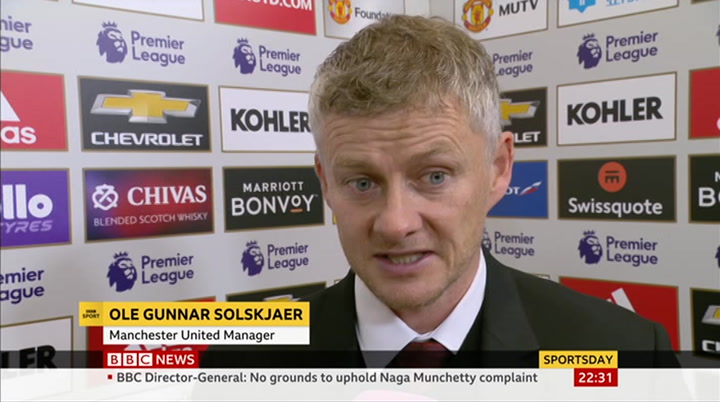 tonight, and you had a great opportunity to get three points because i think you had the game where you wanted to come... how many times this season have we been 1—0 up times this season have we been 1—0 up and not managed to get the second goal, which is the most important thing? can we learn from it. today was a steep learning curve for us. fifa have ruled that cardiff city must pay the first instalment of £5.3 million to nantes for striker emiliano sala. the 28—year—old argentinian died in a plane crash injanuary while travelling from france tojoin his new club. just a warning there is some flash photography coming in these pictures coming up. cardiff have argued they were not liable for any of the full £15 million fee because sala was not officially their player when he died. the second instalment of the agreed fee is due to be paid nextjanuary. cardiff say they are seeking further clarification from fifa
10:33 pm 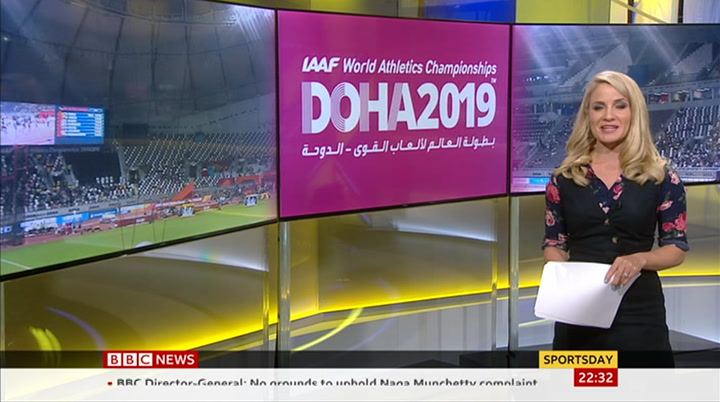 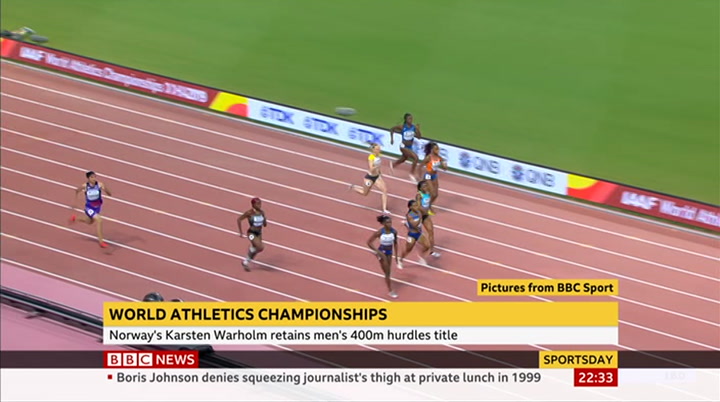 favour to win the gold medal because fraser price, as i say, is out. the defending champion has pulled out because of injury. the silver medallist from london also pulled out. she was a bronze medallist on the 100 metres last night. the only real challenge for dina asher—smith is elaine thompson, the him and pick champion from rio. she will go into the rest of the round, huge confidence, perhaps first sprinkled metal in the modern era. adam... also in action. he was hugely disappointed in the 100 metre final. looks good in qualifying, cruised into the home straight and successfully negotiated his way into the final. he has a strong chance of getting a metal. the strong favourite, the american. going back
10:35 pm 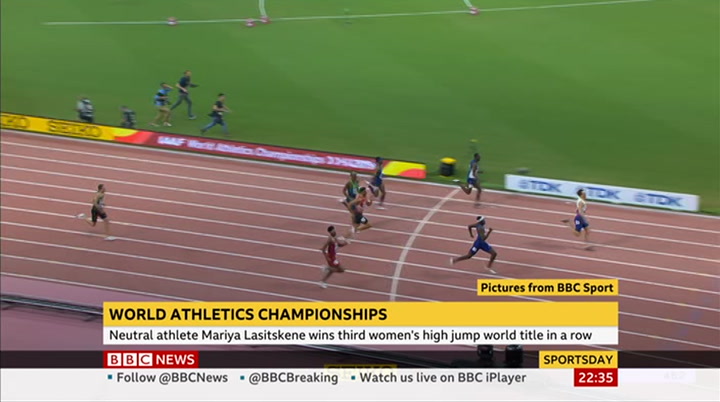 to tonight, loads of drama on the track as the day gone on, including the men's 400 metre hurdles. carsten warholm successfully defended that title again. what a reaction from the viking! quite a reaction from the crowd. the... warholm won the race, defend the title he won in london 2017, but was made to work hard by his rifle. the two of them have been shoulder to shoulder, and in those three men, talking about three of the four fastest man in history. and after the rest, carsten warholm told me it took everything he had to clean that victory. this was a very tough race. actually, it is nojoke! i actually had pain in my chest, i'm going to die but it is going to be worth it!
10:36 pm

herel die but it is going to be worth it! here i am, a champion, and i'm not dead either. something of a surprise and the men's 500 metres. the defending champion from london, had he not got a wild card here, would not be competing. he saved his best for when he really mattered, held office competitor in the home straight, and just like he did in london 2017, when he beat mo farrar, he celebrated with his trademark robot. we have talked about the crowds and the lack of people in the stadium. it is an ex—pat community here. they created a really great atmosphere and the stadium this evening. you just really hope he will continue to attract the crowds. ade adedoyin, thank you forjoining us. tomorrow is another rest day at the rugby world cup, but there'll be renewed confidence from the scotland camp following their victory
10:37 pm 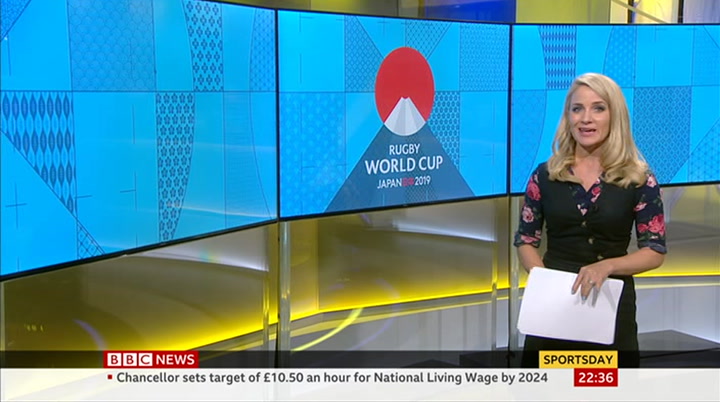 over samoa earlier. they scored four tries in a much—improved performance to secure the 34—0 win and that vital bonus point — one that could prove crucial in their group. our correspondent katie gornall sent us this report from kobe. there was so much pressure on scotland coming into this game against samoa — defeat was not an option and they knew they had to win and score four tries in the process that would yield that all—important bonus point and give them the best chance of progressing from pool a, which is wide open. there were nerves in the stadium, the conditions were against them, it was hot and humid, but just as anxiety was beginning to build, there was finn russell with a wonderful crossfield kick. that got them up and running, greig laidlaw added another try and then after the break, two penalty tries, one in the 75th
10:38 pm 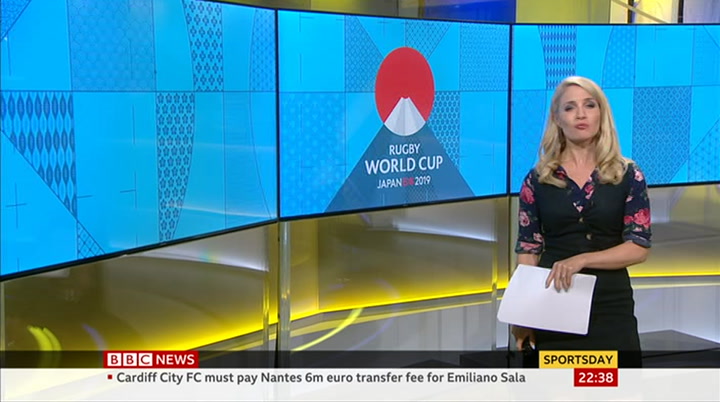 minute, saw them get the four tries they needed and leave kobe with maximum points. there is relief all around here right now and it is not job done yet for scotland. they have to face russia and the host japan. they need to win both games. that will be far from easy but tonight they have won a huge game under pressure. it is a big boost to them and the perfect response after the trauma of that opening game defeat to ireland. katie gornall with the story of the match. let's hear now from the coach and captain — on the day that the real scotland turned up injapan. that was a true reflection of who we are and what we are capable of, and what playing for scotland means for these players. that was a tough challenge, they had to rise up and face knowing that if if we underperform tonight, we are out of the world cup. and we are playing a very dangerous team, such as the effort, it was excellent. —— to see
10:39 pm

the effort. it was tough and the ball was slippery but i think it was the same for both teams, and it was pleasing oui’ for both teams, and it was pleasing our defence managed to get a few over the samoan handling because of the pressure. and obviously the ball is pretty greasy. it was tough but it was tougher for both teams. let's have a quick look at some of the day's other headlines. manchester city women have been drawn against atletico madrid in the last 16 of the champions league. wsl champions arsenal will play slavia prague and glasgow city will take on brondby. those ties will be played next month. west ham's goalkeeper lukas fabianski will be out for up to two months because of a torn hip muscle. he picked up the injury taking a goalkick during their 2—2 draw with bournemouth on saturday. british number one kyle edmund has suffered his fifth straight defeat on tour, this time to wild card zhizhen zhang in three sets at the china open. dan evans and cameron norrie are both through. andy murray plays tomorrow.
10:40 pm

well, it's also the japan open this week. novak djokovic is set to make his return. but beforehand, the world number one has been taking in some of the local culture in tokyo. take a look at this. one of the country's biggest draws is, of course, sumo wrestling — so the serbian decided to have a go for himself. he may be top seed in his sport, but i think he comes up short in the ring with this lot. the locals didn't look too impressed either. he might be better sticking to tennis. what do you think? as usual, ou'll find all the latest on the bbc sport website. that's all from sportsday. coming up in a moment, the papers. buy from me.
left
right
email Borrow Program
tv