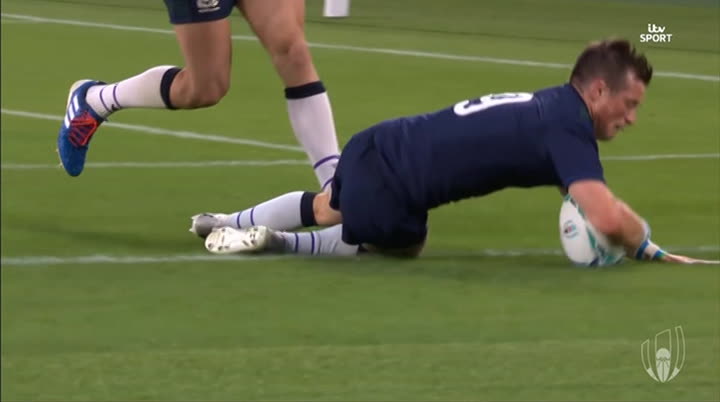 against the hosts japan, after they run in nine tries against russia. and how one tweet has caused a diplomatic row between china and the united states, over basketball. good evening. wales are the latest team through to the quarter—finals of the rugby world cup injapan. but they had to go through a real battle to get there. they were pushed all the way by a ferocious fiji side in oita. eventually coming through as 29—17 winners, thanks to a hat—trick from wing josh adams. our correspondent, katie gornall, watched the action.
10:31 pm

wales always knew that fiji could be dangerous opponents so they were given a real scare, it was a thrilling game. wells had ten days to prepare for this game against fiji, they ran down insidejust four this game against fiji, they ran down inside just four minutes, this game against fiji, they ran down insidejust four minutes, with joshua, the man they call... he was more like a runaway train when he scored fiji's first try, and fiji wasted no time scoring their second, that came just minutes later, so whales were really, at this point, fiji looking at threat, must every time they went forward. but whales did manage to regroup. josh adams scores two tries before the break to get them back on track. they took a narrow lead into half—time. and there was really no let up after the break. this is a bruising physical encounter. fiji were rewarded a penalty try midway through the second half, and just as you thought the momentum was shifting towards the momentum was shifting towards the fijians, josh adams scored his hat trick try. a wonderful off—load from jonathan davis to set them up, diving into the corner. thatjust allowed whales to get a bit of a foothold into this game. liam
10:32 pm

first a horrible slip if gave hastings is another and if that was a touch of bison, well, watch this. george horne handed a try on a plate, barely 20 minutes gone and scotland already out of sight. but crucially, they needed a fourth try and without a vital bonus point. —— with -- with it —— with it to soon after the break, they got it in style. darcy grimes brilliance, setting a pawn once again, it wasjob done. from there, russia was simply run ragged, horn going on to complete an impressive hat trick, a thumping morale boosting win for scotland, and a place in the quarterfinals could still be theirs. and so, to what promises to be some showdown, scotla nd promises to be some showdown, scotland will now have to be the host japan in their final group game, and even then, it could all come down to bonus points, but at least their world cup hopes are still alive. andy swiss, bbc news. while we know england are already through to the last date, but their final pool match against france on saturday could be
10:34 pm

cancelled because of the weather. it's all because of this — typhoon hagibis. it's currently tracking towards toyko and it's expected to make landfall on saturday. that england—france match is in yokohama just south of toyko and it's the most vulnerable to the weather. scotland have their crucial last group match against japan at the same venue on sunday, but the weather is expected to have improved by then. we'll know more in the early hours of tomorrow morning. england's footballers say they're prepared to walk off the pitch if one of their team receives racist abuse in this week's euro 2020 qualifiers. england face the czech republic on friday, before their match against bulgaria on monday takes place in a partially closed stadium, that's due to the racist behaviour of bulgarian fans in two matches earlier this year. it doesn't matter whether it is one player that is being abused or the whole team, we are all one big group.
10:35 pm 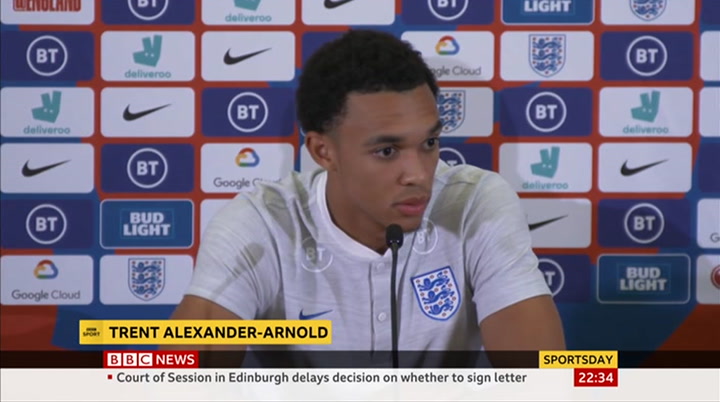 the decision will be made with everyone, if the team does not feel comfortable playing i am sure we have the backing and support of everyone around us that that's the right decision to be made. meanwhile, wales midfielder aaron ramsey won't be fit to play in their qualifier against slovakia on thursday. thejuventus player trained today in wales but didn't travel with the squad because he's suffering from some muscle tightness. manager ryan giggs hopes he'll be back for the home game against croatia in cardiff at the weekend. and northern ireland have a big match of their own this week— they go to rotterdam to take on the netherlands. michael 0'neill‘s side are currently second in their group, but they may need to take at least a point from their game against the dutch. this is a dutch squad that possibly, you know, has a bit more expectation, little bit more pressure, because they have not qualified for the i stress my tournaments. we have to make the game mentally as well, we have to make dow in their play, doubt and the supporters minds
10:36 pm 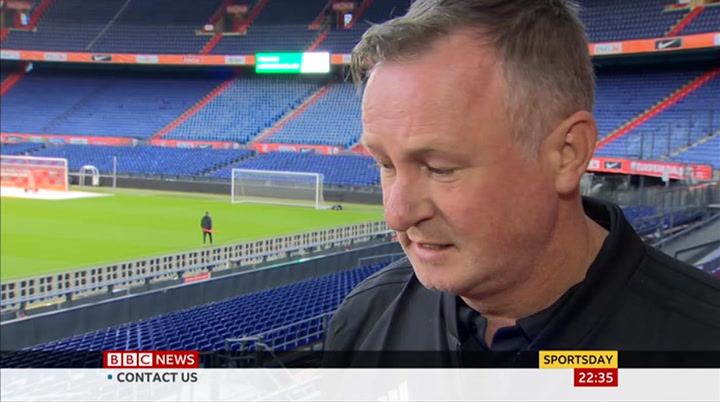 as well, and hopefully, if we can do that, it will give us an opportunity to capitalise on that, and hopefully ta ke to capitalise on that, and hopefully take something from the game. now for a look at some of the day's other sports stories. wolverhampton wanderers will play their next europa league game at slovan bratislava, on the 24th of october, behind closed doors. that's becasue uefa charged the slovakian club after their fans made racist chants in one of their play—off games. fleetwood town bossjoey barton has denied assaulting the then barnsley manager daniel stendel after a match in april. barton appeared at barnsley magistratres court today and pleaded not guilty to assault occasioning actual bodily harm. he's due back in court next month. and england's record wicket taker jimmy anderson is being helped by manchester city as he tries to recover from the calf injury, that ruled him out of most of this summer's ashes series. anderson will train at the club's etihad campus as he hopes to be fit to play in england's winter tours.
10:37 pm

great britian‘s men finished 5th in the team final at gymnastics' world championships in stuttgart. max whitlock was the last member of the team to go on the pommel. the olympic champion knew the team couldn't improve on 5th, but attempting a really difficult routine, he fell off mid—way through. he managed to finish, though, with a score of 111.133. russia won the gold for the first time since the breakup of the soviet union, overtaking china — the top men's gymnastics nation for the last 20 years — on the final rotation. japan took bronze. the usjust missed out on a podium place. next to what's been described by fifa as "a moment for real change". football's world governing body say that it will "stand firm" in ensuring that women have access to all football matches in iran. it follows the death of an activist, sahar kho—day—ari, who set herself on fire after being arrested for trying to watch a match. she later died.
10:38 pm 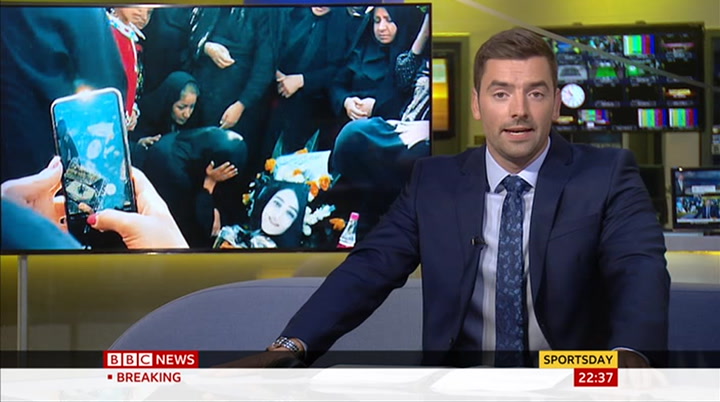 iran have agreed to let women attend their world cup qualifier against cambodia tomorrow. but fifa have been criticised for not acting sooner. we are totally focused on taking sure women can attend this match on the 10th of october, and then just
10:39 pm 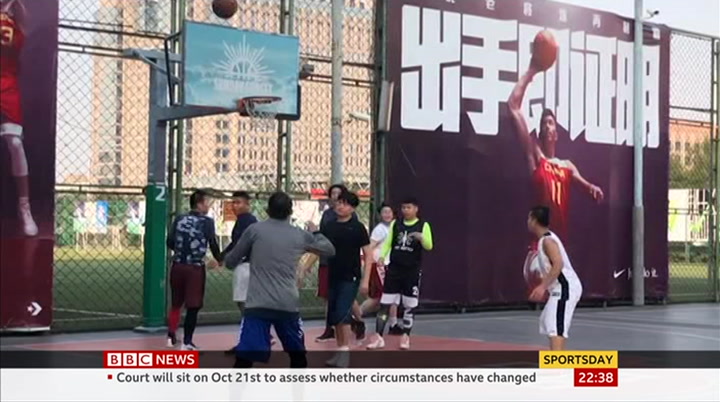 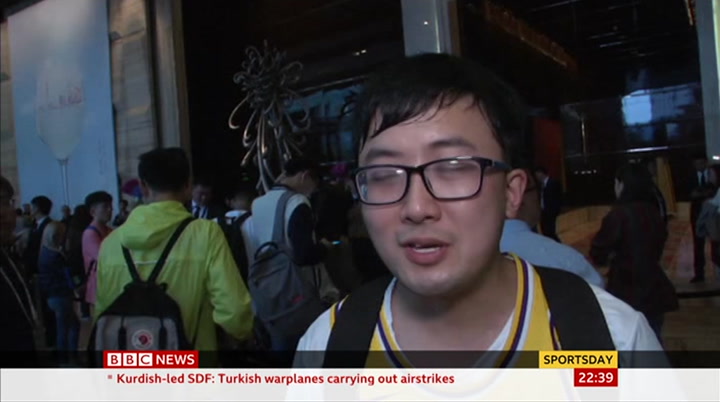