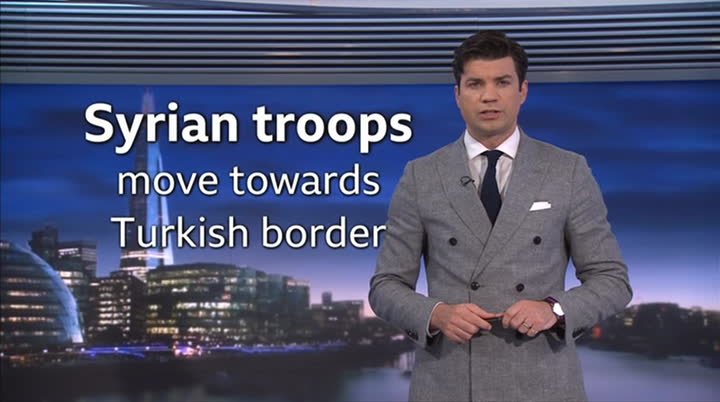 the us vice president says donald trump has asked the turkish leader for an immediate ceasefire in syria. mr trump has faced criticism over his decision to withdraw us troops from syria, opening the way for turkey to attack the kurds who were america's main allies in the fight against is militants. more than 100,000 people have been taking part in rescue operations injapan dealing with the aftermath of typhoon hagibis — the worst storm to hit the country in decades. and this story is getting lots of attention on bbc.com. k—pop fans are grieving the loss of one of their biggest
1:31 am 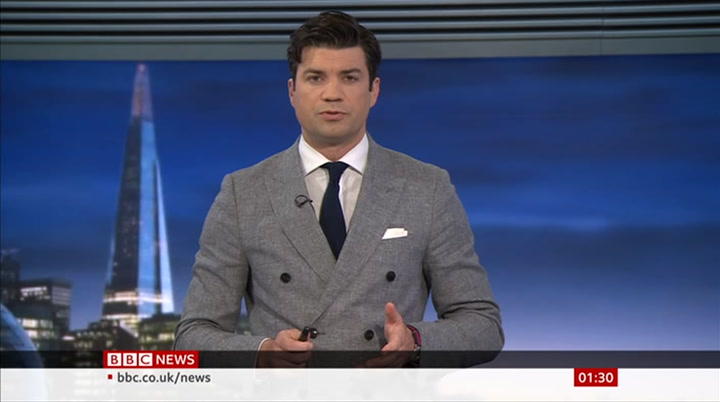 stars sulli found dead in her home, just 25 years old. that's all. stay with bbc world news. there's more on all our stories on the website. now on bbc news live to singapore for asia business report. trade war warning. the us trade secretary threatens china with tarah pike said the dealers instruct by the middle of december. chinese buyers in dubai. by the desert city property market is attracting investors from the people's republic. good morning, asia. hello, world. glad you could join us. let's start off with the us because the treasury secretary has warned that
1:32 am 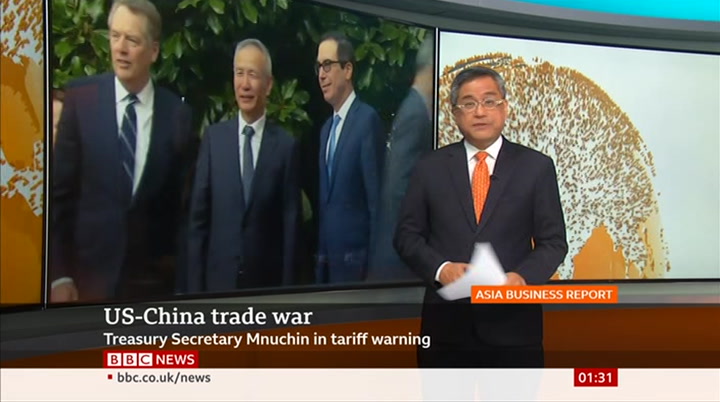 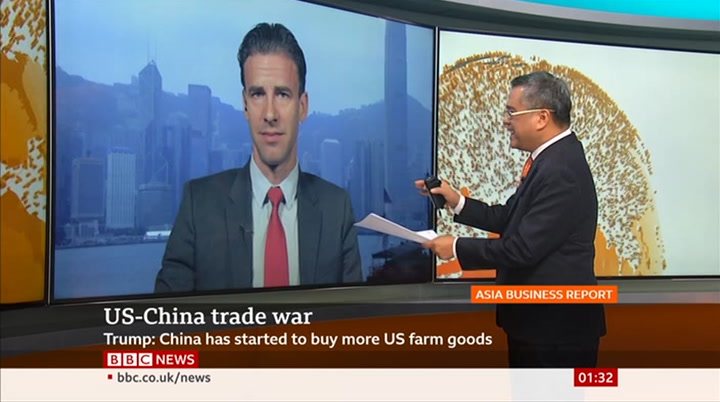 this scripted before from the trump administration claiming progress on similar issues and then afterwards, downplaying and saying that we could still see more tariffs going forward. i think a little perspective is important. you got to remember that the ending of last week, there were sanctions that went into effect in the united states, reports from the south china morning post that china was going to leave early so the fact that there was a positive meeting on friday, an announcement of the delay in tariffs isa announcement of the delay in tariffs is a really good thing and people need to not lose sight of that. besides do need to figure out how to finalise these details. wide when you expected deal to happen?” finalise these details. wide when you expected dealto happen? i think you expected dealto happen? i think you are going to have a couple of different phases. i will give you some perspective. we are not going
1:34 am 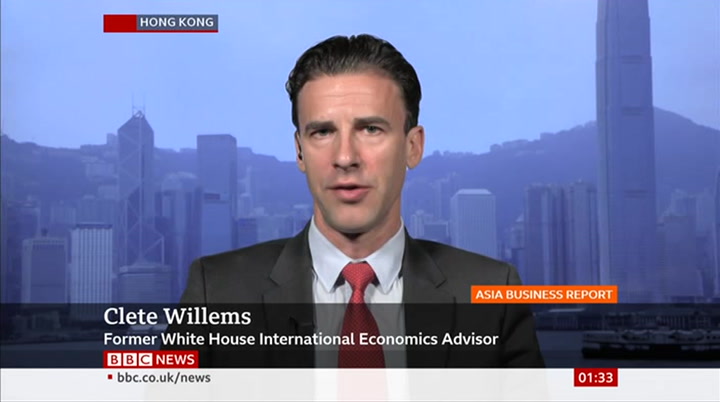 to get a grand bargain, some perspective. we are not going to geta grand bargain, the some perspective. we are not going to get a grand bargain, the big deal. the problems between the us and china are too broad and deep. right now we're talking about doing this phases, incrementally. my estimation is that they will be able to reach an agreement of some nature by aipac, that will hopefully form the basis to have a border agreement. i don't think you have a situation where all the tariffs the us has in place are going to go away before the election. clete willems, a former trade negotiator with the trump administration. us president said washington. negotiating with turkey on a $100 billion trade deal and boost tariffs on the country's steel to 50% after turkey launched the assault on kurdish militia on wednesday after mr trump withdrew
1:35 am 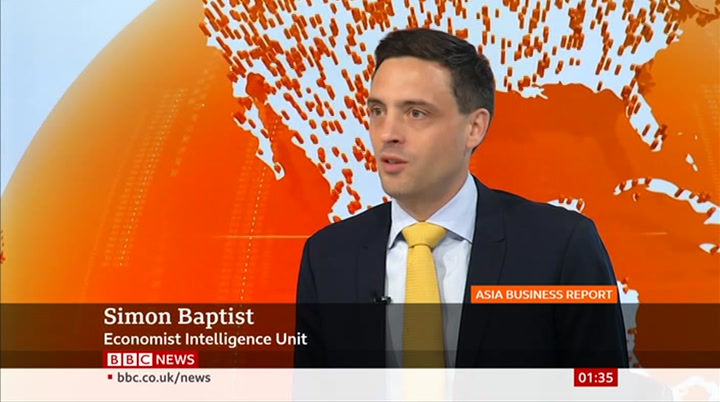 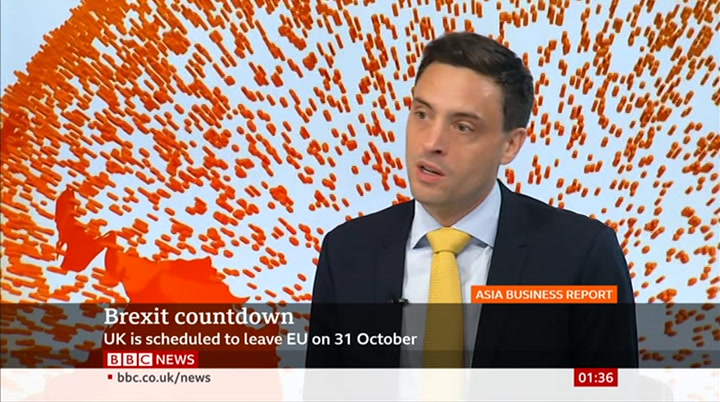 the irish sea, separating northern ireland, from the rest of the uk. it's the only thing i can see that will lead to a deal. whether the uk is willing to make that concession, it's probably unlikely but it's feasible. lieber —— libre cryptocurrency backers pledged to forge ahead despite setbacks in recent days. dave lee gave us all the details from san francisco. that's certainly the impression the libra association wants to give us. government was announced earlier this year, with 28 founding members, that's gone down to 21. seven companies of drop out and within that seminar some of the biggest payment processing firms in the world, mastercard, paypal, striped, all companies that gave this libra cryptocurrency project from facebook
1:38 am 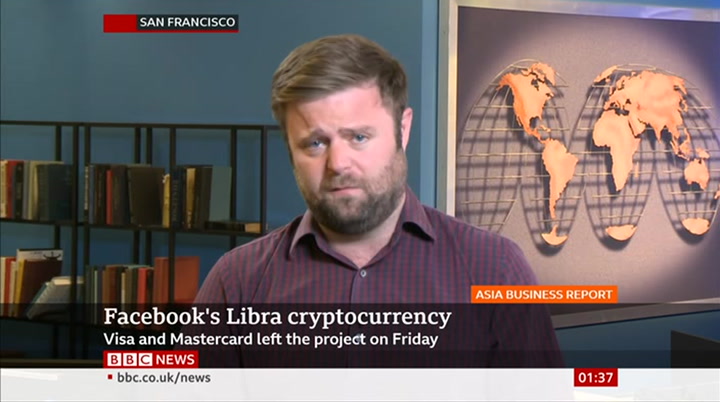 some added credibility. instead they have to go forward without those people. the libra association says they have done that but looking at some of the scrutiny coming down the road at them, it does seem rather difficult. including in the us where there is considerable scrutiny about how this might affect the global financial order. wework has a new problem that could prove costly. it's closed about 2300 phone booths at some of the sites in the us and canada after discovered elevated levels of formaldehyde. the company which abandoned plans for a stock market listing last month has told te na nts market listing last month has told tenants the chemical could pose a cancer risk if there is long—term exposure. dubai property is in a slump. prices are down one third since their peak five years ago and that means some buyers are picking
1:39 am 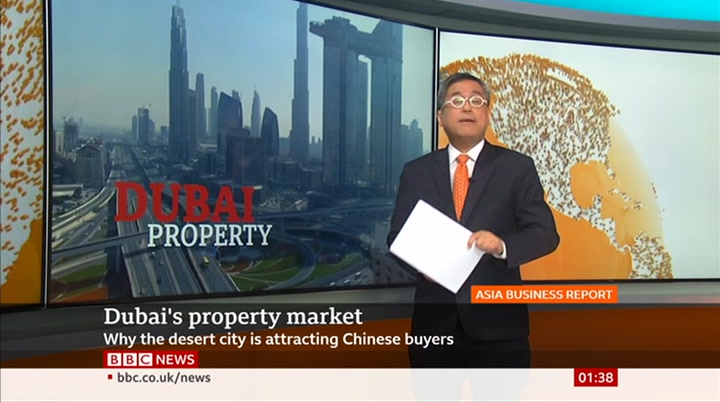 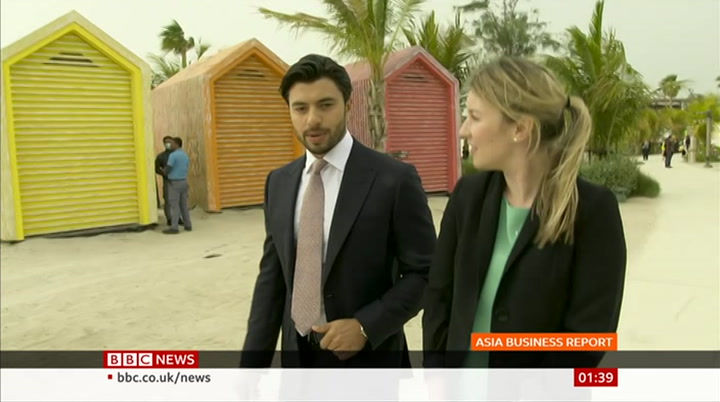 buyers market. faraz al masadi sold more properties than anyone last year. my plan is to bring the same from china in 2019 so another $400 million from china alone so we are starting an office in shanghai but the interest is concrete for us. also encouraging chinese investment has been the uae‘s push to strengthen chart —— ties with beijing. first of all, the visa. we don't need visa to come to dubai so this is a big difference and chinese feel very free to come and also to live here and now you can see, even in dubai mall, you can see the chinese word sign so it's quite easy for them to explore in dubai. as dubai prepares to host expo 2020 next year, chinese investors won't have forgotten the boost the world
1:41 am 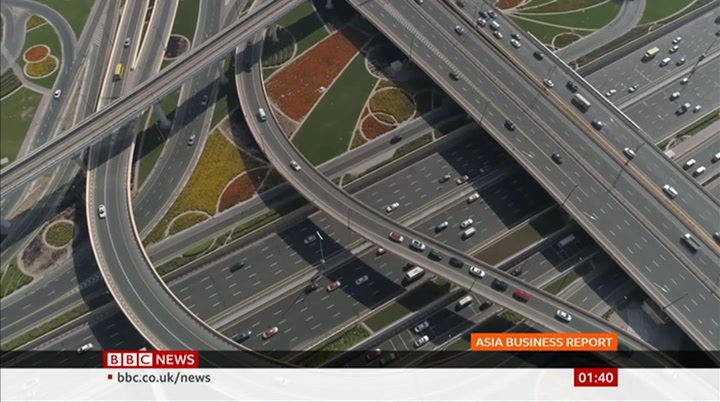 fair have forgotten the boost the world fa i r style have forgotten the boost the world fair style event gave to shanghai property prices a decade ago. chinese investment in this corner of the middle east looks set to keep rising for now. vivian nunes, bbc news, dubai. it's take a look at the asian market. today, japan is playing catch up after yesterday's gains. you have the all 0rdinaries index also up byjust sent them a percent, despite us stocks halting a three day winning streak overnight. sport today is coming up next. his is bbc news the top stories this hour. syrian government forces are on the move towards the border
1:42 am 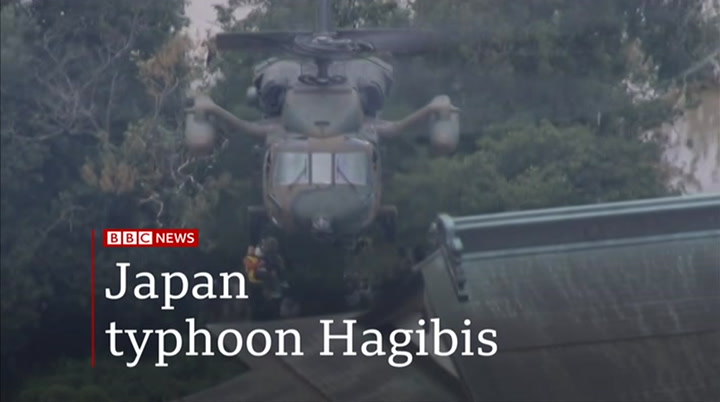 with turkey — risking another dangerous confrontation. more than 100,000 people have been taking part in rescue operations injapan following typhoon hagibis, the worst storm to hit the country in decades. hundreds of colleagues, family and friends have attended the funeral of pc andrew harper in oxford today. the 28 year—old officer — who'd been married forjust four weeks — was killed while responding to a reported burglary in august. three teenagers have been charged with murder. 0ur correspondentjon kay reports. just weeks after his wedding day, the funeral of pc andrew harper. hundreds of his colleagues lined the route. a city silent. to remember the 28—year—old officer killed in the line of duty.
1:43 am 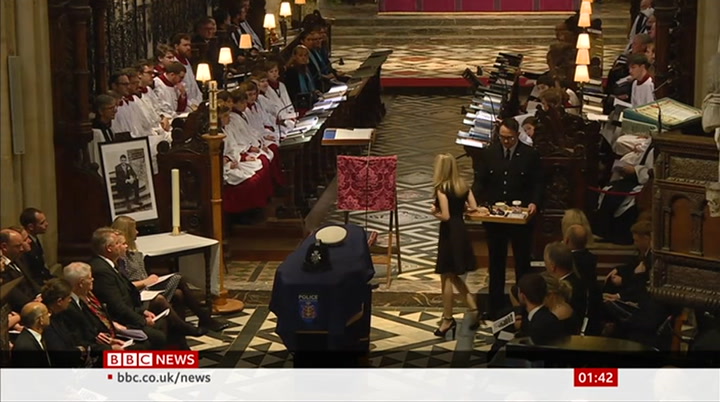 inside the oxford christ church cathedral his widow led the tributes. they met at school and married just 28 days before he was killed. she placed his ceremonial police had upon his coffin, pc harper was killed while responding to reports of a burglary in august. your smile was infectious, your humour relentless. even in the darkest of times you made me laugh. your personality shone through in everything you did
1:44 am 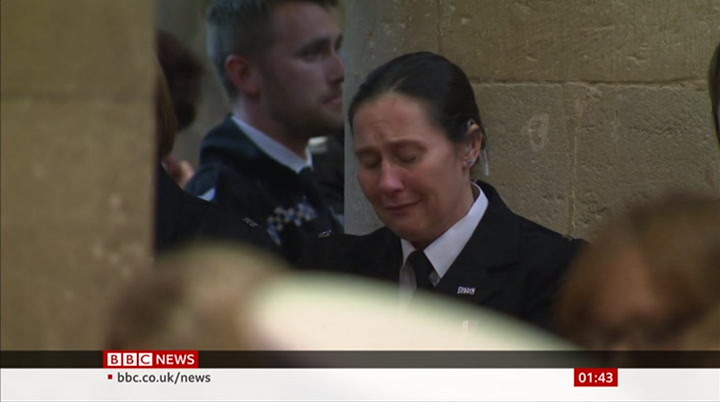 and i am so very proud of you. in the pouring rain, officers from around the country joined members of the public. well, he was so young and he had just got married. he'd got his life in front of him and yeah, it's terrible. how important is it for you to stand and show your respects? very important, because where would we be without the police? jon kay, bbc news, 0xford. let'sjust about let's just about it from me. you can reach me on twitter — i'm @lvaughanjones.
1:45 am 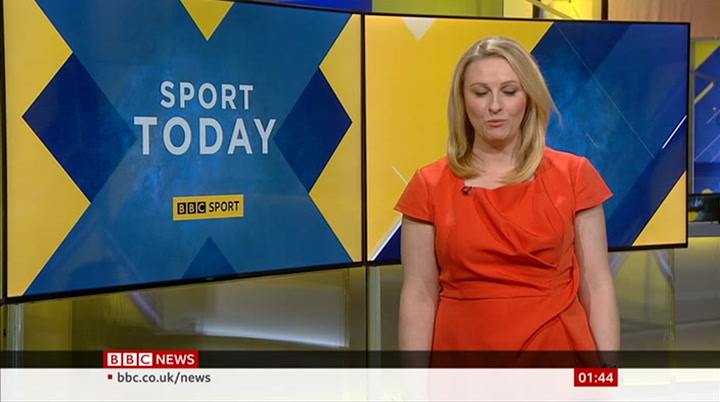 hello, this is sport today, live from the bbc sport centre. coming up: i defiant england put six goals past bulgaria, but did it in the face of ugly. bulgaria, but did it in the face of ugly, racist abuse as the match was almost abandoned because of monkey chanting. it is the international language, so will football breakthrough political barriers as a historic match is scheduled to take place in the middle east. the only major title that eludes him. roger federer confirms his bid for the tokyo 2020 olympics. welcome to the programme. we start with the disturbing story that the euro, euro qualifier match between england and bulgaria had to be stopped twice because of racist cha nts stopped twice because of racist chants from the
left
right
disc Borrow a DVD of this show DVD
tv