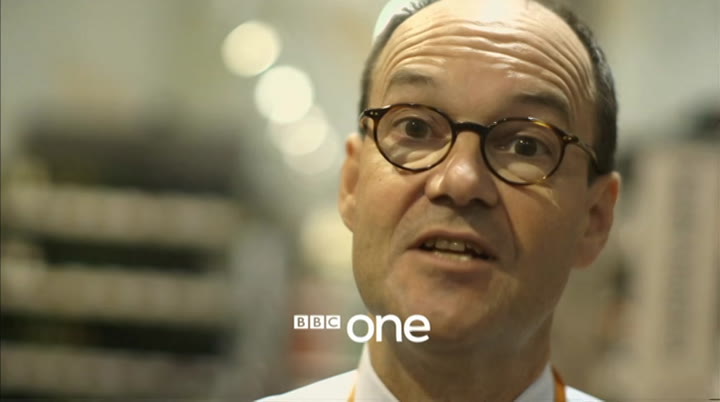 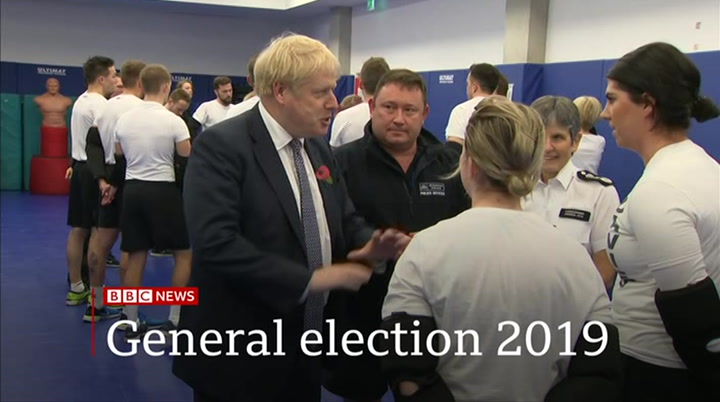 the uk would leave the eu, the prime minister says it's jeremy corbyn‘s fault that brexit hasn't happened and focusses on public services. we are investing in infrastructure, in new technology, and that's the future that we want to build, but at the moment we've got this roadblock, this logjam, and we need to get through it. the us house of representatives passes a resolution to formally proceed with the impeachment inquiry against president trump. the body of missing british backpacker, amelia bambridge, is found in cambodia. more than 70 passengers are killed, as their train catches fire in pakistan. in a moment it will be time for sportsday but first a look at what else is coming up this evening on bbc news. as a number of female mps say abuse is forcing them out of politics, we'll be asking the chief executive of the jo cox foundation, what needs to be done. that's at 8.15pm. at 8.30pm, we'll be taking a look atjohn bercow‘s most memorable moments as he stands down as house of commons speaker.
6:32 pm

and at 10.40 and 11.30, we'll be taking a look at tomorrow's front pages — our reviewers are ruth lea, an economist and adviser to the arbuthnot banking group, and nicola bartlett, political correspondent for the daily mirror. that's all ahead on bbc news. now on bbc news it's time for sportsday. hello and welcome to sportsday. i'm sarah mulkerrins. england take a breather ahead of the biggest game of their lives. just one win all season — now hearts have sacked manager craig levein. and as she attempts to become a two—weight boxing world champion, katie taylor tells us what motivates her. i love being a trailblazer in the sport and being a pioneer in the sport and being a pioneer in the sport is absolutely huge for me.
6:33 pm 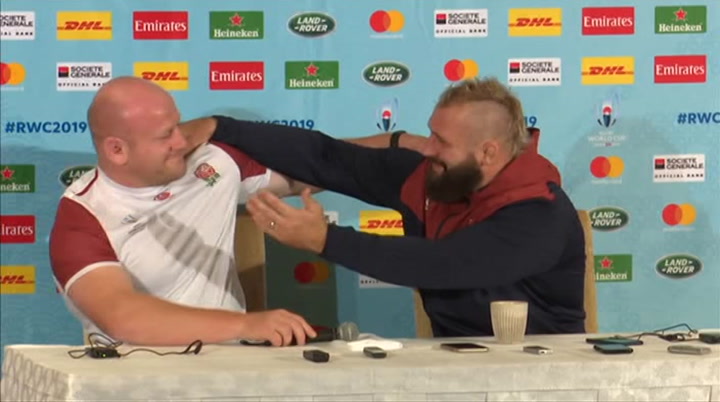 also coming up in the programme... we'll show you just how strong england's rugby team spirit really is. hello and welcome to sportsday. we are inching, hour by hour, minute by minute, ever closer to that rugby world cup final on saturday in japan. about 39 hours to kick—off between england and south africa in a match that could define a generation. and today head coach eddiejones named an unchanged side to the one that beat new zealand, so comprehensively in the semi—final last weekend and he also said his side are ready to produce their finest hour. from tokyo here's our correpsondent andy swiss. it is perhaps hardly surprising that eddiejones is sticking to exactly the same starting team that
6:34 pm 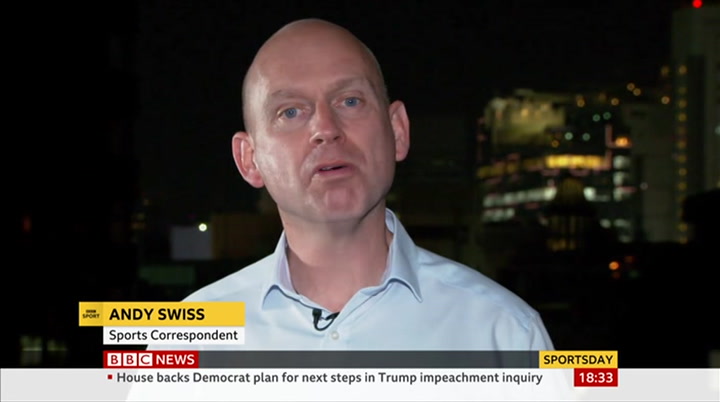 performed so brilliantly against the all blacks in the semifinal so that means that george ford continues at fly—half with a captain 0wen farrell outside and at centre. there is one interesting new name though on the bench, scrum—half ben spencer. now spencer only arrived out injapan on monday, he wasn't in the original squad. he was called out as emergency cover when willi heinz was injured during the game against the all blacks. he is very likely to play a role at some stage, so what a story that could be. england will start the final as favourites. they had a stunning performance against new zealand. eddie jones says stunning performance against new zealand. eddiejones says he is taking nothing for granted. we have spent four years getting ready for this occasion so that is why the players can be relaxed, why ican be why the players can be relaxed, why i can be relaxed, because we know we've done the work. but we are not
6:35 pm 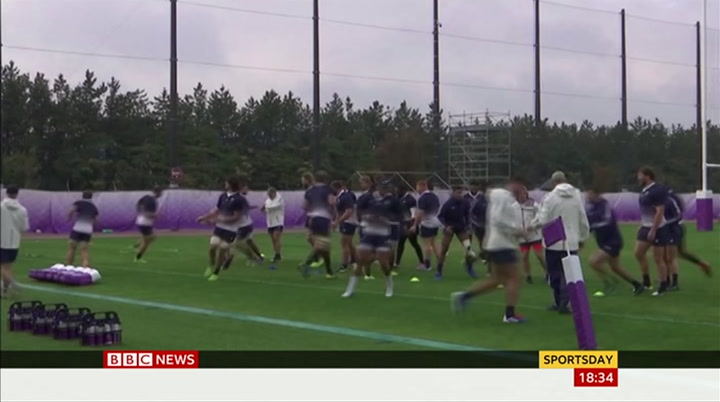 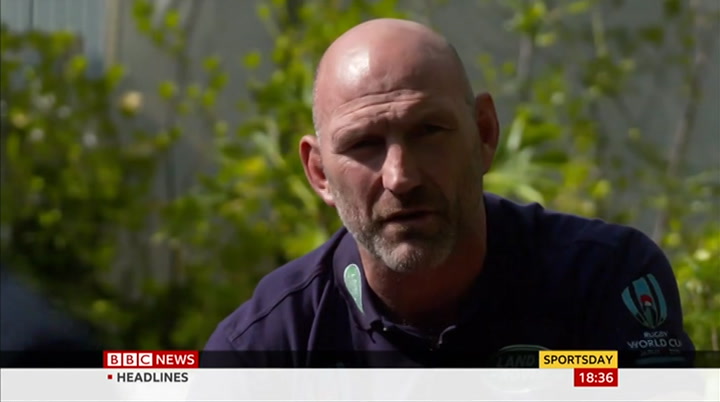 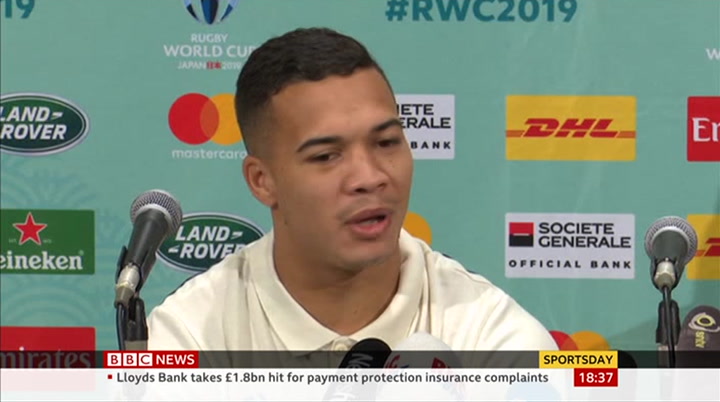 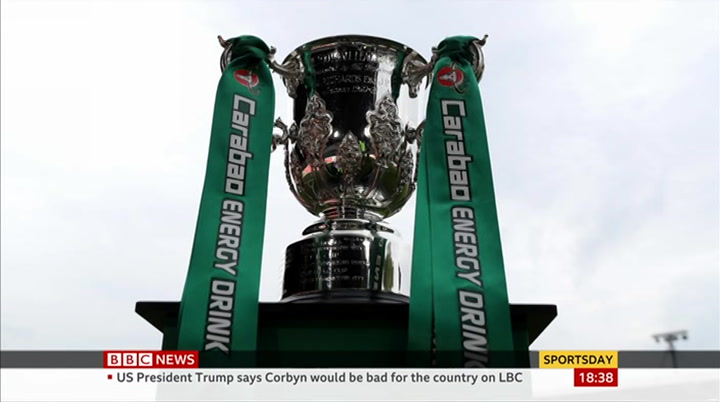 we've had the draw for the quarter—finals of the league cup — and holders manchester city have been drawn away at oxford united of league one. liverpool's tie against aston villa is likely to be rescheduled as they play in the fifa club world cup on the 18th december. everton will be at home to leicester city. league two colchester united, the lowest—ranked side left in the competition, face a trip to five—time winners manchester united. and this is how they reacted to the draw this morning. didn't bat an eyelid, did they? levein has been sacked from hearts. stephen has more. craig levein returned to hearts and he stepped up two years ago for his second spell as manager. initially things went well and this time last
6:40 pm 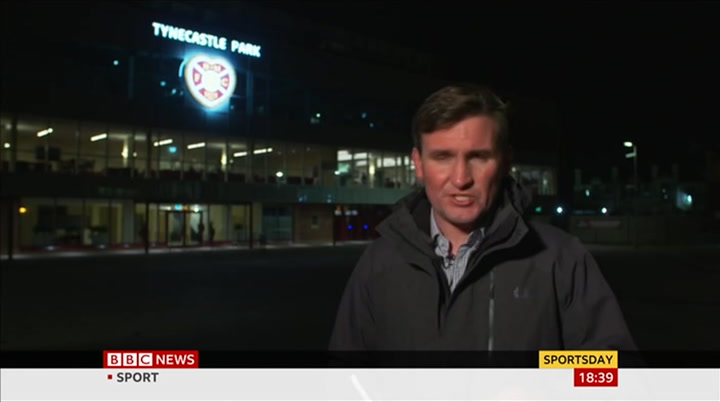 year, hearts were top of the league. since then, there has been a dramatic loss of form and with that has come increasing anger and frustration from the hearts supporters. the final straw came last night following a 1— nil defeat for hearts, leaving them joint bottom. at the end of the game, supporters were calling for levein to be sacked and just after 4pm this afternoon it was confirmed that is what has happened. the club said they thanked him for his efforts, saying levein had worked tirelessly and selflessly around the clock to try and achieve success. the statement confirmed that as well as being sacked as manager, he steps down as director of football and will see out his contract until the end of the season in a behind—the—scenes role. the task for the club now is to find a new
6:41 pm 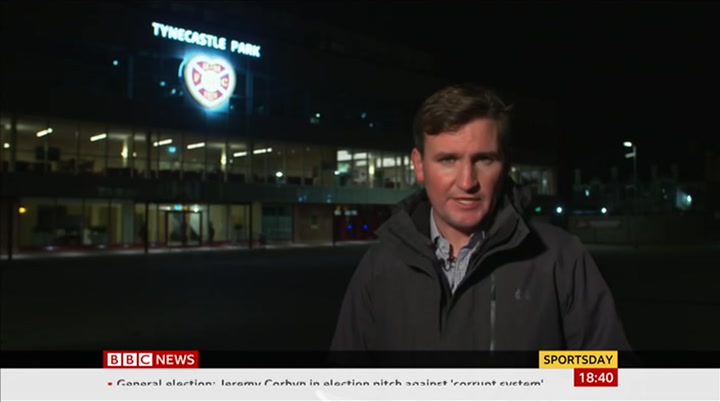 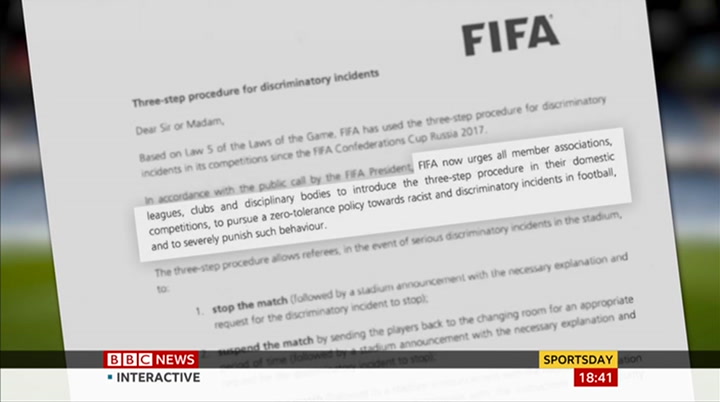 this letter from fifa to all associations. it says fifa urges all member associations and disciplinary bodyis member associations and disciplinary body is to introduce the three step procedure in their domestic competitions... we can't shy away from it. if we wa nt football to we can't shy away from it. if we want football to be having a wider impact in the community then the issues that we have got in football have to be addressed. the main issue in scotland is sectarianism, which fits directly inside these new if he had guidelines, something that scottish football has wrestled with for a long time and always failed to find a solution. could they now be forced to adopt someone else's? the spf l wouldn't comment. the scottish fa
6:43 pm 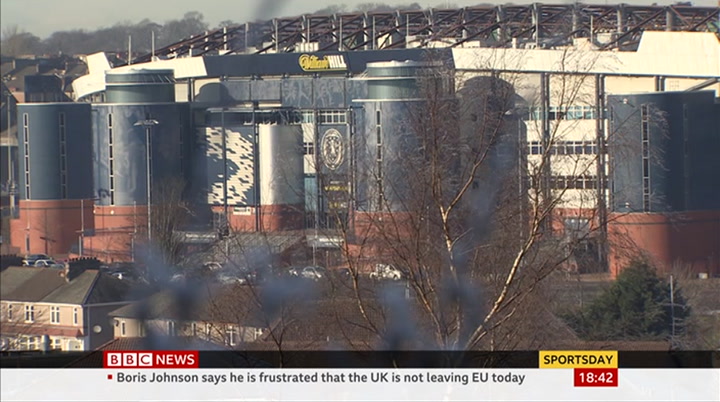 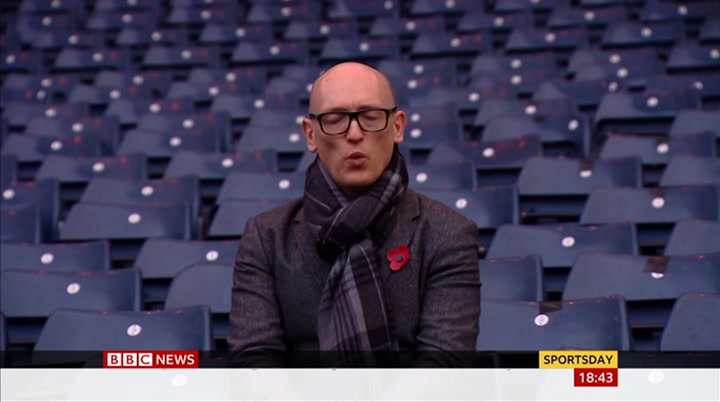 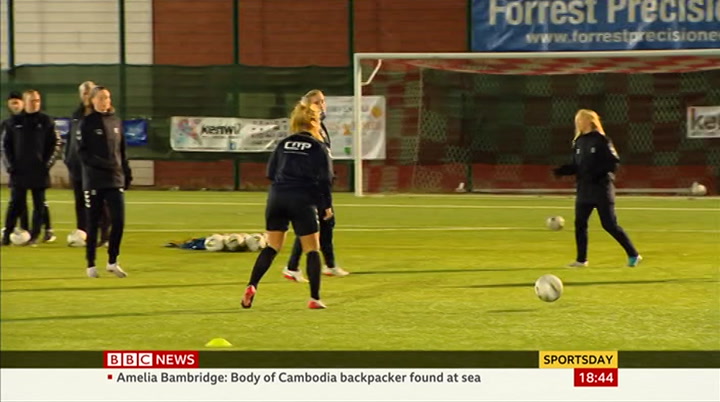 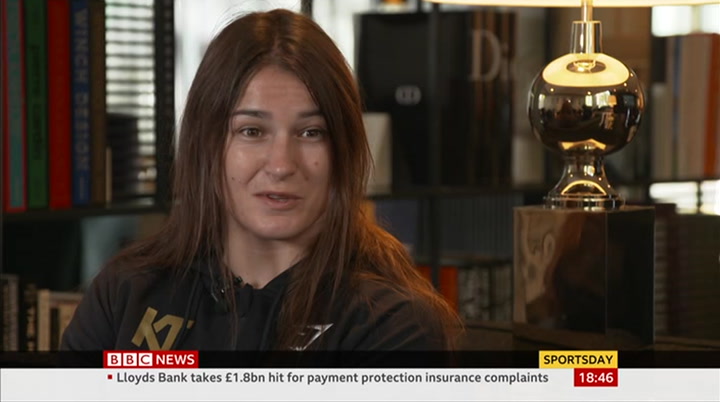 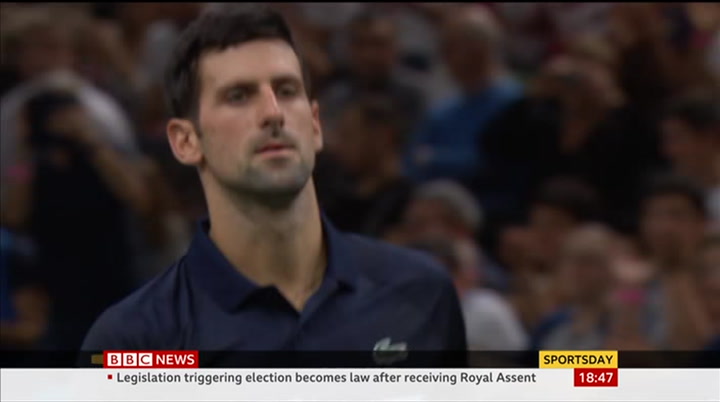 in the third round — with djokovic winning 7—6, 6—1. the serbian will face greek stefanos tsitsipas in the quarterfinals. rory mcilroy is three shots off the lead after his first round at the latest world golf championship event in shanghai. five birdies in six holes helped him finish on 5 under par — with china's haotong li leading the field. 0n the eve of the united states grand prix in formula 1, rule makers have approved new regulations from 2021 designed to make the racing closer and cut costs for teams. ferrari, mercedes and red bull have yet to back them. last night, a 95 year drought came to an end for the capital city of the usa because their baseball team — the washington nationals — won the world series, the pinnacle of the sport in the states. they were taking on the houston astros — a dynsasty — the nationals considered the underdogs in this best of seven series. 0ur reporter tulsen
6:49 pm 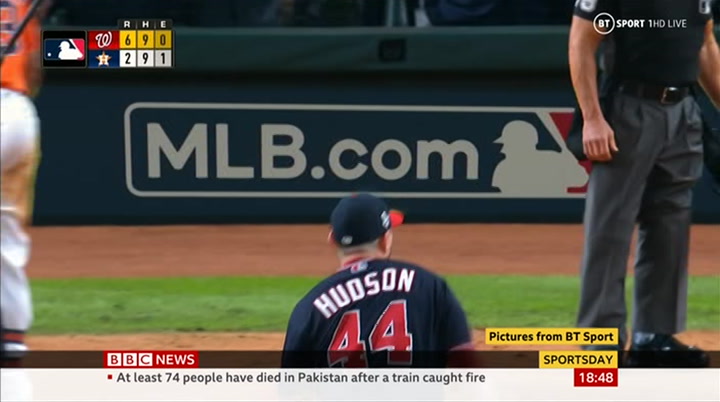 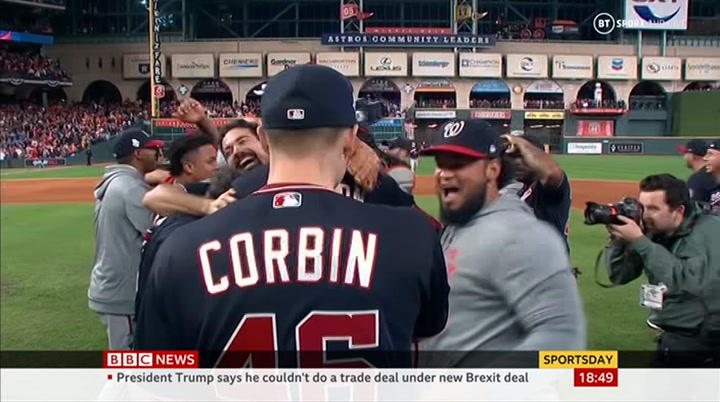 overwhelmed many as they became the third team from washington to win a major league title since the senators. this was meant to be all about the houston astros end it didn't turn out that way after all seven games were won by the visiting team. we are the world champions! well before we go, let's get back to the big story in town. that rugby world cup final on satruday between england and south africa. lots of media duty for the players and this england pair, well, they weren't afraid to show their emotions. it is here in hinckley rugby club when manu tuilagi arrived and
left
right
email Borrow Program
tv