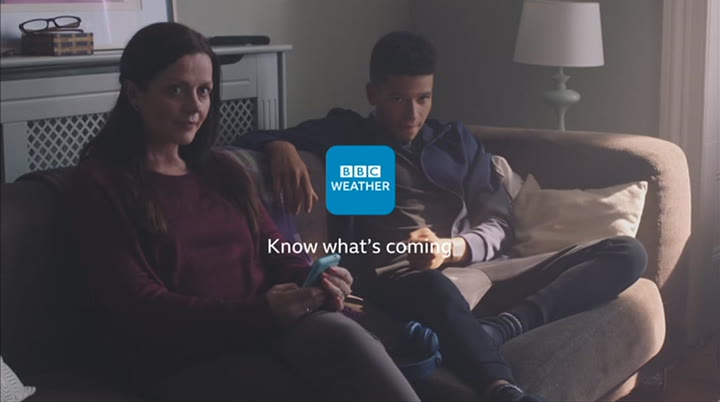 this is the business briefing. i'm sally bundock. british steel is set to announce a $90 million rescue from a chinese company that could save up to 4,000 jobs in the uk. up in smoke. 0nce hailed as the healthier alternative to cigarettes, vaping products are facing a backlash around the globe after their safety has been challenged. and markets in asia are under pressure with the hang seng seeing heavy losses as tensions escalate in hong kong — also the main markets in shanghai are under pressure with demand rising for safe havens such
5:31 am

as the japanese yen and gold. a chinese firm is poised to rescue british steel for close to 90 million dollars — which could safeguard up to 4,000 jobs in the uk. the company has been in liquidation since may and has been kept alive by the british government. sam ryder has more. british steel has been feeling the heat for more than six months. since going into liquidation it's been propped up by the british government. several deals have been on the table, but china'sjingye group is the front runner for the ta ke group is the front runner for the take over. the rescue deal is worth
5:32 am 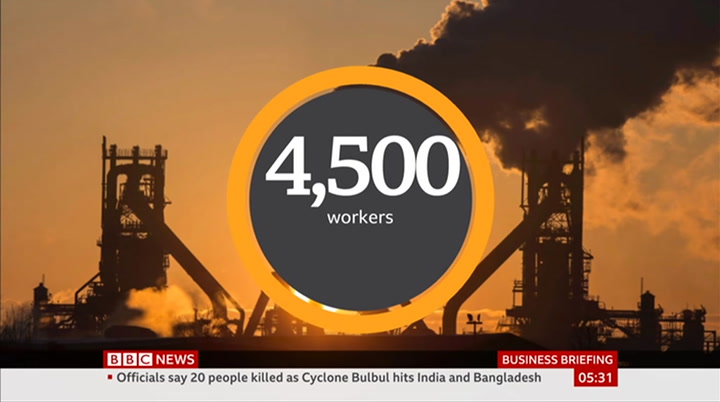 almost 90 million us dollars. news which will no doubt come as some relief to the a500 people employed at the discomfort and his side side is only 20,000 workers in the supply chain rely on british steel. many have been rallying in their communities to save theirjobs. have been rallying in their communities to save theirjobsli feel that the steelworks is the life of the town. basically, it's the heart of the town. if the heart stops beating services, retail, everything else around it will be affected massively. british steel had been in rescue talks with a turkish company, but the deal fell through last month. so it has been a year full of uncertainty for workers and it won't stop anytime soon. it's believed the chinese firm has plans to increase steel production, but has warned costs may need to be cut. that is the latest on british steel. more detail online as well if you look at the business page of the bbc
5:33 am 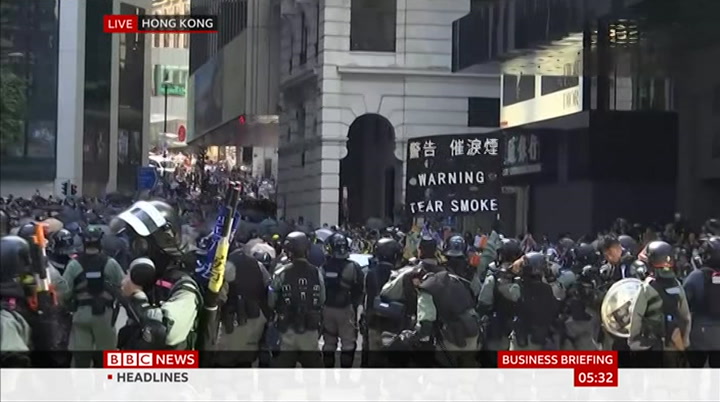 website. now we take you live to hong kong. the central business district. they have just used tear gas, we have been told, to disperse protesters there. the tensions have escalated dramatically today. a policeman shot at least one person earlier during another day of violence and chaos in hong kong. footage shown live on facebook earlier today showed the officer drawing his gun before grappling with a man at a roadblock. another man wearing a facemask approached as the officer shoots him, hitting him in the torso. so there is a lot happening there right now. we are keeping a very close eye on the day as it progresses. but tensions are very heightened in hong kong today in particular. this all as mainland china celebrates one of its most
5:34 am 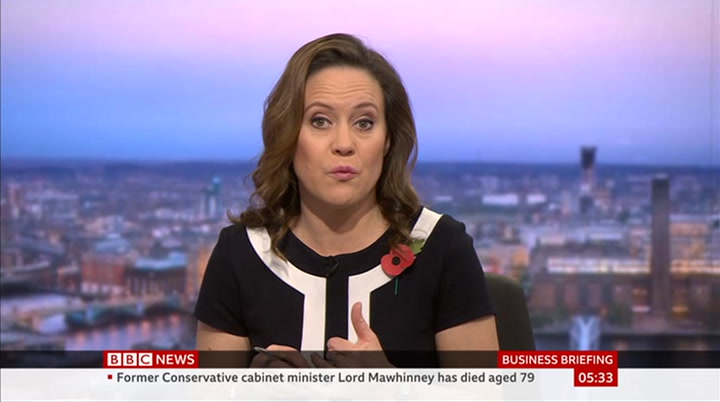 prolific days when it comes to online spending. it's china's singles day, the world's biggest online sales event of the year, bigger in fact than black friday and cyber monday combined. the burning question is "where are the e—cigarettes?" a major crackdown on vaping in china means nine big e—commerce platforms — including alibaba — pulled e—cigs off their shelves ahead of singles day, amid fears that kids are getting hooked. it comes days after the market—leading us e—cigarette maker, juul, decided to stop selling its mint—flavoured nicotine products with immediate effect. mint is a popular flavour among teenagers. in september president trump announced plans to ban all flavoured e—cigarettes, after a spate of vaping—related deaths. the us food and drug administration is finalising a plan to take all non—tobacco flavours off the market there. shane macguill, head of tobacco research at euromonitor joins me now. good morning. this seems to be a
5:35 am

growing trend. we have talked about the two biggest economies in the world taking action to remove e—cigarettes. world taking action to remove e-cigarettes. so we have seen an increasing number of restrictions gci’oss increasing number of restrictions across a number of markets. the commonality i think is concerned about youth access to the products, as you have mentioned, and the safety profile of these products is well compared to cigarettes. there are also specific concerns in the us, we have had a brand in the form ofjuul which is accused of appealing particularly to younger consumers. in china, we should remember as well, where in terms of the traditional tobacco market, big state control of that, it is a monopoly. i think this might be part of wanting to control in a wider sense how people are accessing nicotine in the country as well. this issuing concern about keeping among teenagers and the fact it could lead to addiction, it is almost the opposite of what e—cigarettes are all about. they are supposed to help people get off nicotine, aren't they? nothing is
5:36 am 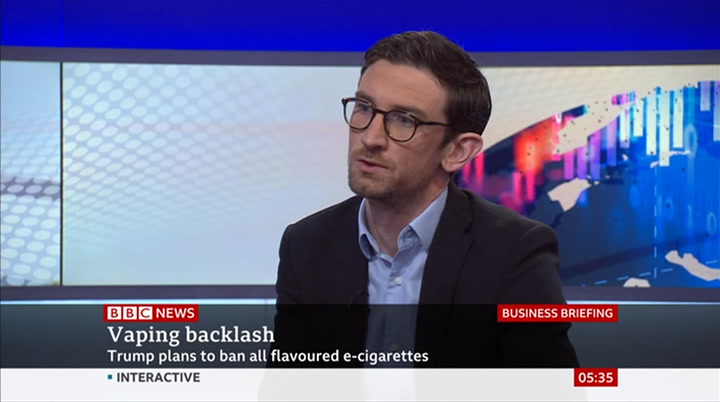 clear and straightforward in the tobacco industry and i think there are two sides to this will stop and think there is a lot of evidence to show people have been able to use e—cigarettes to step away from using combustible cigarettes. 0n the other hand, there is a conversation that i think this be had on society around the role of nicotine and how it several nicotine consumption is an access in terms of youth access as pa rt access in terms of youth access as part of the conversation. the big names within the tobacco industry, this was not the saving grace, that is overtaking it to a degree, but with the huge clampdown on traditional cigarettes this was their way of moving into a safer, healthier environment that was extremely profitable for them. healthier environment that was extremely profitable for themlj think this category is supposed to be the more sustainable long—term nicotine consumption category. if they're not using cigarettes they won't be —— they won't have the health problems. the restrictions are increasing. there is an increasing level and concern in
5:37 am 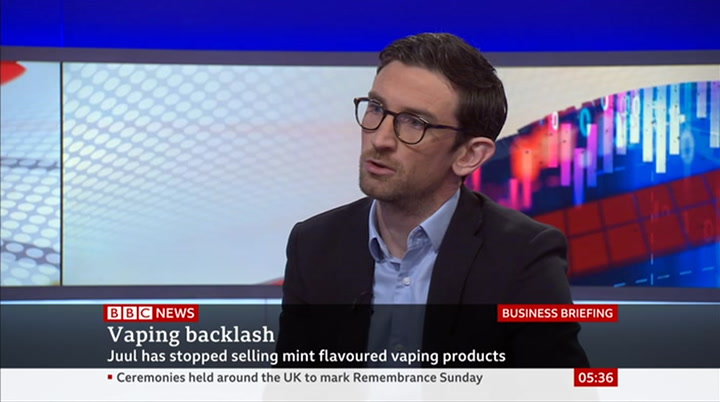 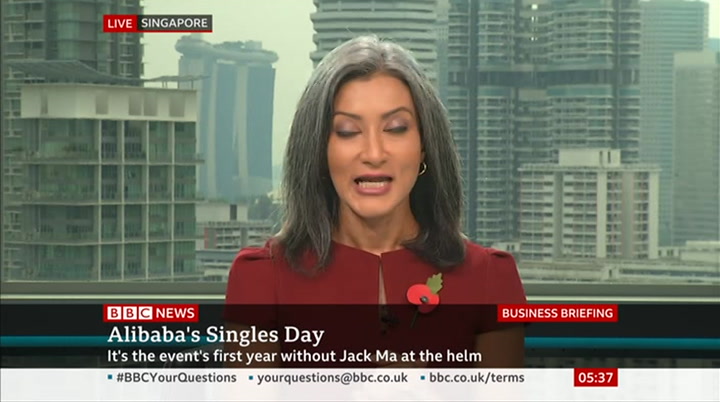 record sales. taylor swift was hired as part of the mega salons. according to reporters, already made about $22 billion in the first nine hours alone, which is well over half of the $30 billion of takings last year. an estimated half a billion shoppers from china to russia to argentina, they are all expected to swim to the e—commerce giant's site to snap up everything from pizza combo deals to luxury cars was began a decade ago as a way for singles to spend on themselves. more merchandise is sold than in the five days the proceeds thanksgiving. the event has been closely watched by investors. they are keen to gauge how willing chinese investors are to spend. we know a survey done less than two weeks ago showed that up to
5:39 am 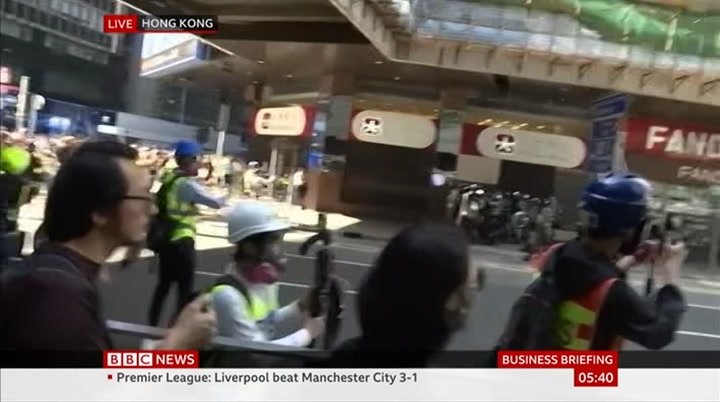 mentioned earlier, a policeman has shot at least one person during today's proteas. that is the very latest from hong kong. and that is your business briefing. new guidance is set to make it easier to get cannabis—based medicines on the nhs in england. the national institute for health and care excellence — nice — has approved two medicines, epidyolex for two rare types of epilepsy, and the spray sativex, which is already available in wales and is for muscle spasms in multiple sclerosis. here's our medical correspondent, fergus walsh. medicine? in the rose has severe epilepsy. but her sieges have reduced dramatically since she has
5:42 am 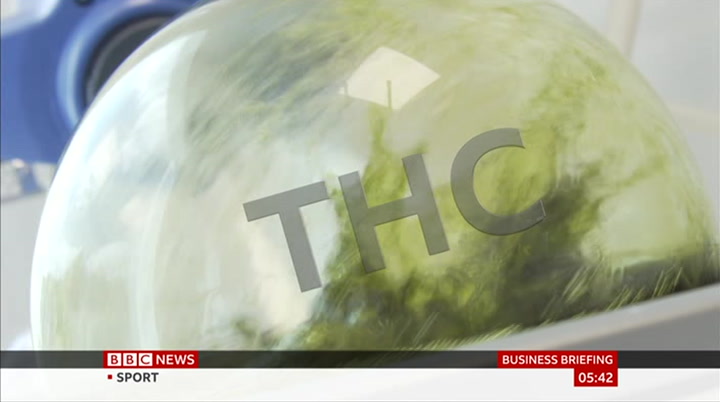 been on medicinal cannabis. her pa rents a re been on medicinal cannabis. her parents are deeply disappointed as her drug will still not be available on the nhs. the epilepsy drug, which has been approved, is called epidyolex. doctors will be able to prescribe it in england, wales, northern ireland for two how to treat forms of epilepsy. scotland may follow later. it contains cbd or coma dial, but no thc, the main psychoactive component of cannabis. many parents spend thousands of pounds per month on getting thc containing cannabis medicines from overseas, despite the law being chased last year to allow specialist doctors to prescribe them here. the other treatment, also derived from cannabis plans, specially cultivated in the uk, is for multiple sclerosis. sativex is a mouth spray which contains a mix of thc and cbd and has been available on the nhs in
5:43 am 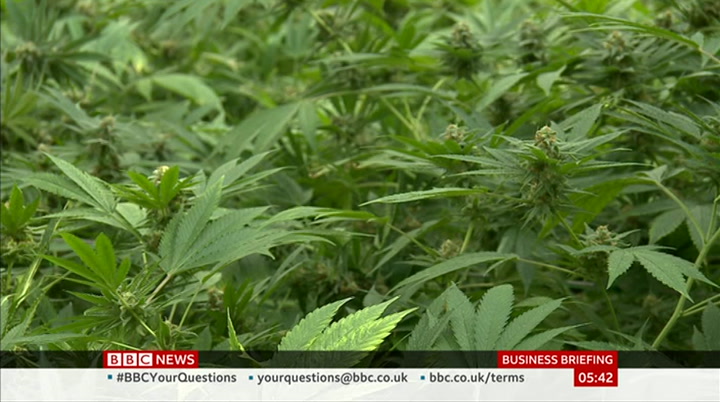 wales since 201a. it's been approved for treating muscle stiffness and spasms. doctors will not be allowed to prescribe it to treat pain, which has disappointed ms patient groups. fergus walsh, bbc news. more on that story another top stories at six o'clock. coming up at six o'clock on breakfast dan walker this is the briefing from bbc news. the latest headlines: a protester is shot at close range by hong kong police using live ammunition. new south wales and now queensland in australia declare a ‘state of emergency‘, with warnings bushfires spreading across the country could pose a ‘catastrophic‘ threat to sydney. political uncertainty in spain, as the socialists win the most seats in sunday's election, but fall short of a majority — and right—wing parties see a surge in support.
5:44 am

now it's time to look at the stories that are making the headlines in the media across the world. we begin with el periodico in spain — it sums up the result of the election nicely with its headline "more difficult" — refering to pm pedro sanchez who, in an attempt to strengthen his hand, has actually lost seats for his party in the country's fourth election in as many years. a bbc investigation features on our website with british airways accused of putting profit before the planet by flying planes with excess fuel, usually to avoid paying higher prices elsewhere. the financial times reports on the upcoming flotation of the saudi state oil firm aramco, saying the pre—launch prospectus is short on vital detail.
5:45 am 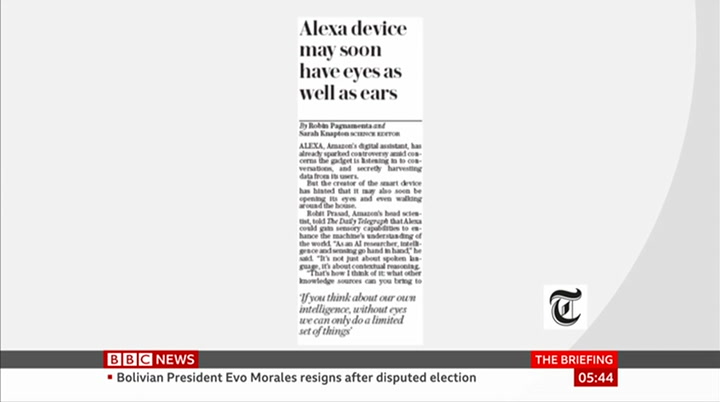 the voice assistant alexa features on the front page of the daily telegraph, after its creator hinted to the newspaper that future versions may be able to see and move around your home. and today is remembrance day, 11 november — yesterday, of course, was remembrance sunday and many of the newspapers, like the daily mirror here, are showing pictures of commemorations led by the queen in london. with me is cornelia meyer who's ceo of mrl corporation, a business consultancy. in spain, a fourth election in as many years and this one it seems has not helped in delivering a government majority. it has not, and we are where we were before, in the uk we would say a hung parliament. the socialist only lost very
5:46 am

marginally, they are at
left
right
disc Borrow a DVD of this show DVD
tv

The latest economic and financial news, market updates and interviews with the key news-makers in the business world.