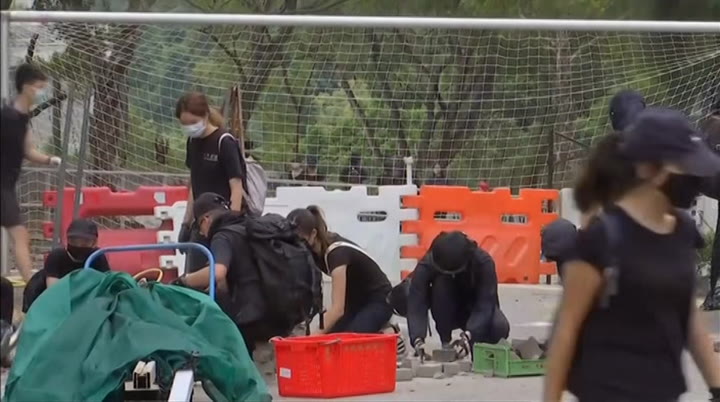 protesters are planning a second day of disruption after monday saw some of the worst unrest in five months of protests. the leader of the territory has warned its taking it "to the brink of no return". hundreds of schools and colleges in australia are closed as people brace themselves for potentially catastrophic bush fires. fire chiefs say the worst danger is to come on tuesday, with serious risk to areas around sydney. and this video is trending on bbc.com: an exhibition by the oscar—winning filmmaker steve mcqueen — in which he photographed over 75, 000 school children across london. it was inspired by his one of his own class photos dating back to 1977. that's all. stay with bbc world news. more on our website bbc.co.uk/news and the news app.
1:31 am 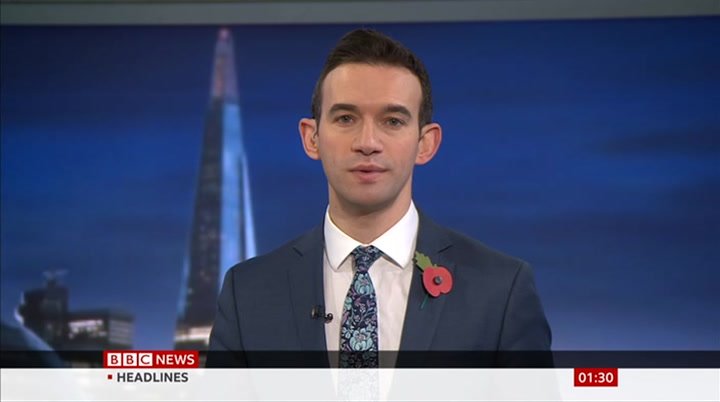 now on bbc news, live to singapore for asia business report the mouse versus the dragon. disney launches its streaming service as it ta kes launches its streaming service as it takes on its chinese rivals. and china's port crisis. how african swine fever is impacting supplies of the country's favourite meat. welcome to asia business report. we start with the streaming war because entertainment giant disney launches its disney plus service later today. it faces fierce competition around the world, not least in china. we have more on the highly competitive
1:32 am 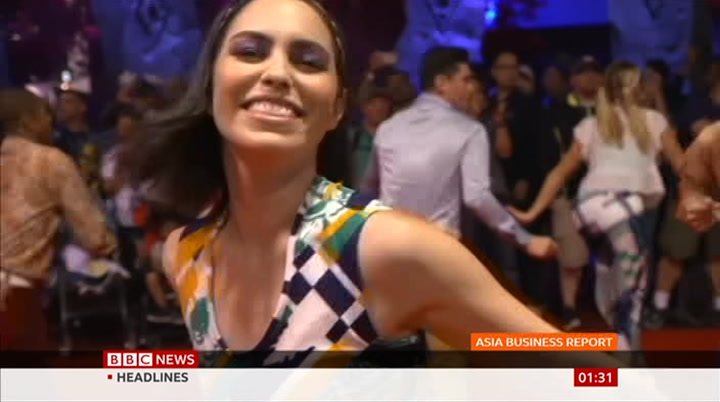 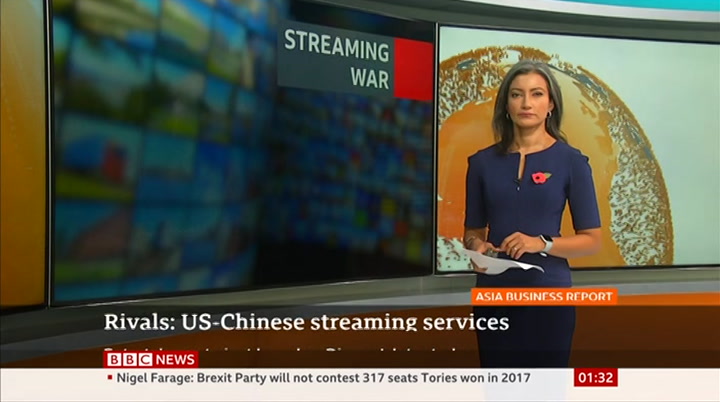 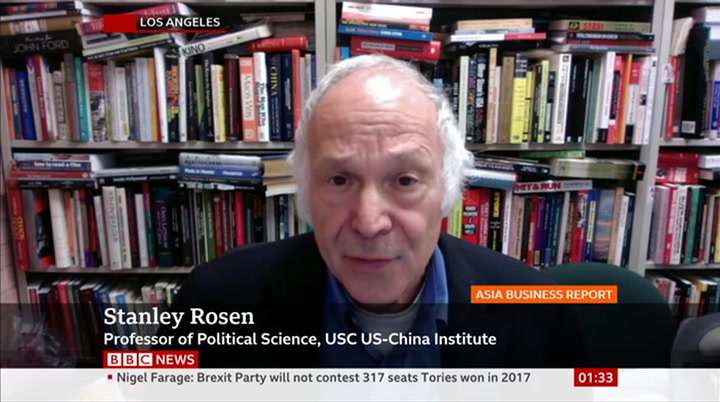 any of the companies but there are many obstacles to their success. primarily, the regulations don't allow a ny primarily, the regulations don't allow any foreign investment in video on demand or streaming and evenif video on demand or streaming and even if they were able to get around that, the streaming services can only have 30% foreign content. that isa only have 30% foreign content. that is a problem right there. disney tried something with elliot barbour in 2016 and after —— something alibaba. netflix has made no headway whatsoever in china after its failed tie—up with another company and that is the crux of the problem, they need to tie—up with a chinese streaming company. how will these
1:35 am 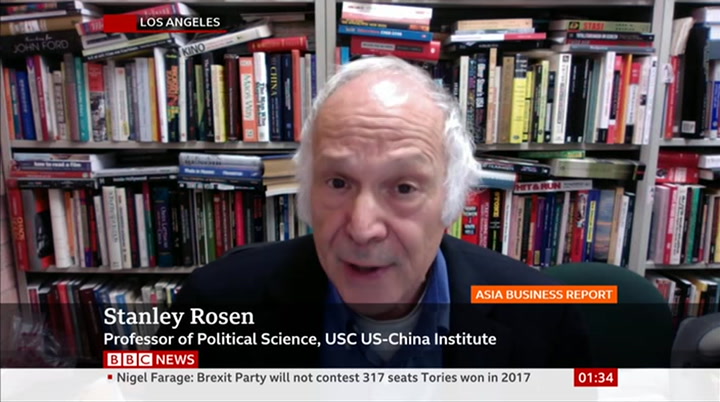 american streaming giants going to compete? i don't think they can. if it were a few years earlier, perhaps because one started out relying on korean dramas. but now they are doing much more in terms of original chinese content and have been quite successful. these companies have millions and hundreds of millions of people who watch them. it is a market that is extremely difficult in terms of regulation and in terms of the competition from chinese companies. there has in yet another signal that the indian economy is sharply weakening. this time it is industrial output data. what do these numbers tell us? what it means is that the indian economic slowdown
1:36 am 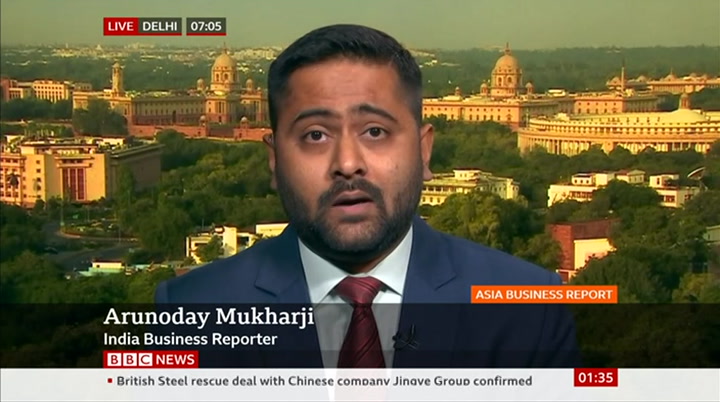 is that the indian economic slowdown is not just here is that the indian economic slowdown is notjust here to stay but it is deepening. 0utput figures have dropped by 4.3%. if you return back last year at the same time it had grown. so just look at the steep fall within the span of a few months. the core sector data also came out and the core sector industries here are the backbone of industry and they had also fallen the steepest amount in 1a years. coupled with the power of demand and consumption has dropped 13.2%, the lowest in 12 years. so what these numbers essentially do is paint a dismal pick because the indian economy, it was stated it wants to grow to a $5 trillion mark by 2024 but the current rate of growth is dismal. it is not looking very encouraging. thank you for those numbers there. it has been over a
1:37 am 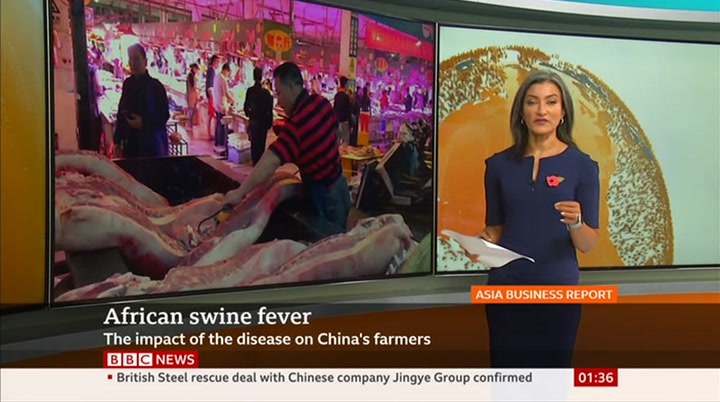 year since a devastating outbreak of swine fever first struck in china. the world organisation for animal health warned that 50% of the herd there could be wiped out. our chinese correspond —— china correspondent went to meet a farmer who has lost almost everything. this is not supposed to be a quiet lifeless place. but the indiscriminate blight of an incurable disease has wiped out chen's livelihood. this is all she has left. down the road from chen's piggery, almost all of his neighbours have shut down. gate after gate is
1:38 am 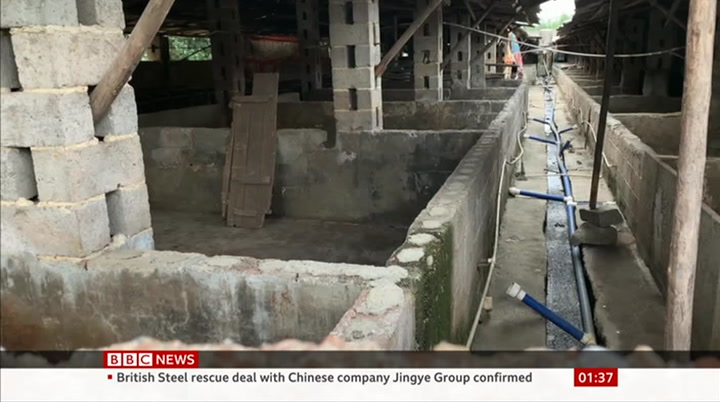 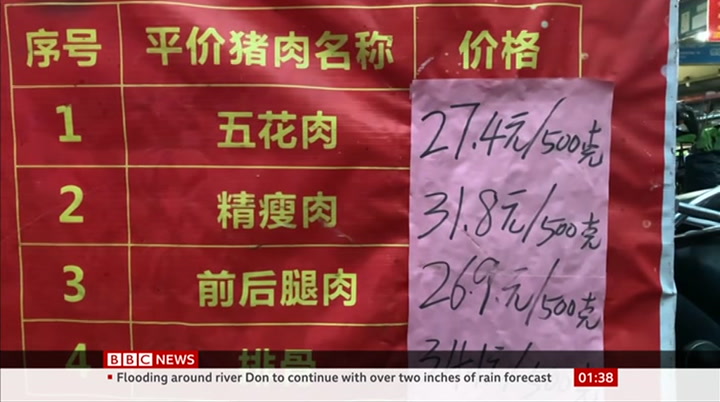 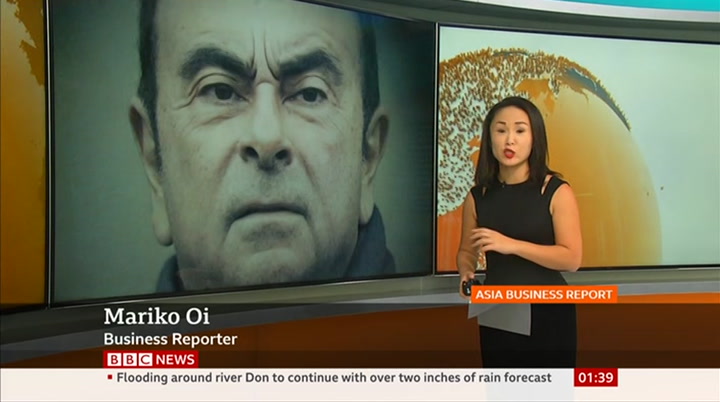 year of management crisis, what is expected? marinko joins us now. i am afraid it is not expected to look good. the management crisis mentioned isjust one good. the management crisis mentioned is just one of many issues for the company. the carmaker is struggling to sell, especially in the united states and next week it will be exactly a year since that shocker rest of carlos ghosn, the chief executive and chairman of nissan when he landed at canada airport. since he has been charged, appeared in court and he is still waiting trial on allegations of financial misconduct. all the charges he has repeatedly denied. the following his first arrest, nissan shells —— shares fell off the cliff and they have now fallen even further because the company's earnings have lunch and it has announced a cut of tens of thousands ofjobs. ghosn was replaced by this man who has recently announced his
1:41 am 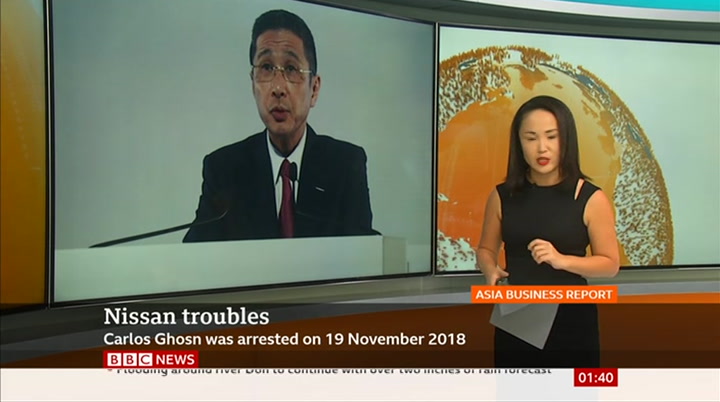 resignation and the new boss starts on december one. many challenges for the new boss. and you will be watching those results when they come out later today. thank you. before we go, a quick look at the markets. asian markets are flat. the hong kong market hasjust markets. asian markets are flat. the hong kong market has just opened higher after the falls yesterday. it fell after the unrest and increased violence in hong kong. and that is it for this edition. thank you for watching. this is bbc news. the top stories this hour. protesters plan a second day of disruption in hong kong after monday saw some of the worst unrest in five months of unrest. reports say police have fired tear gas on a university campus. two australian states declare a state of emergency as bushfires bring a "catastrophic" threat to heavily populated areas.
1:42 am 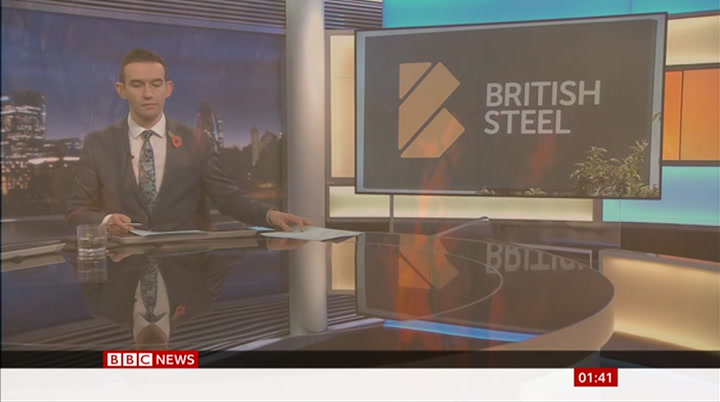 one of the uk's biggest steel—makers has been rescued by a chinese company, potentially safeguarding thousands of jobs. british steel had been facing collapse after going into liquidation earlier this year but the chinese producerjingye confirmed on monday it had agreed a buyout. it's promising to invest in british steel's main plant in scunthorpe as well as its other sites on teesside and in north yorkshire. our business editor simonjack reports. this plant has been on government life support since it collapsed in may. technically in liquidation, it was offered a chinese lifeline today, and workers on their way home welcomed it. well, it's been a big concern, hasn't it? nobody not knowing what is happening, whether they've got a job, can pay their mortgages, feed theirfamilies. yeah, it's great news. obviously, there's been uncertainty around it, but now we know, this close to christmas, that we've got a job. with 4,000 employees and 20,000 in the supply chain, the steelworks is the lifeblood of scunthorpe.
1:43 am 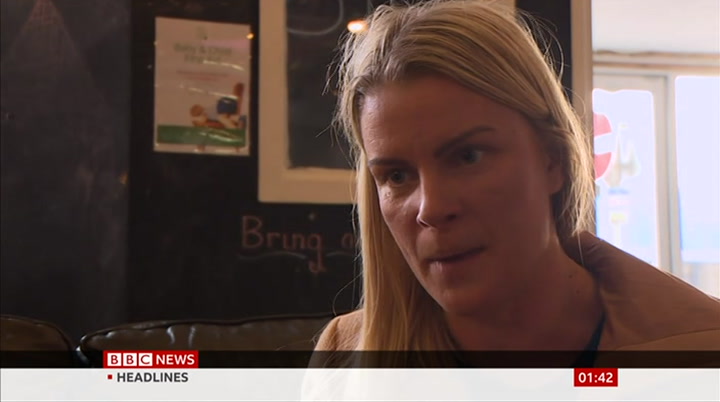 it's massive good news for lots of families and obviously for all the housing, for jobs, for younger people and older people alike, it's just great news. the thought of scunthorpe not having steel—making here really doesn't bear thinking about. charlotte charles worked there for 12 years and is now a union organiser. we're cautiously optimistic. our members have been in a state of flux for a number of months now, and so to have some concrete commitment to steel—making in scunthorpe is always going to be welcome news, but the devil will be in the detail. the due diligence has been done extremely quickly, and so now what we want is a commitment to secure the jobs and terms and conditions for our members moving forward. if the deal goes ahead, current workers' jobs are secure, according to company assurances to the government. well, i have been given reassurances that next to all current staff will be kept, and that in the medium to longer term they are likely to want to expand the workforce, so i have been given quite strong reassurances on that front. this is not a totally done deal yet, there's details to go through,
1:44 am 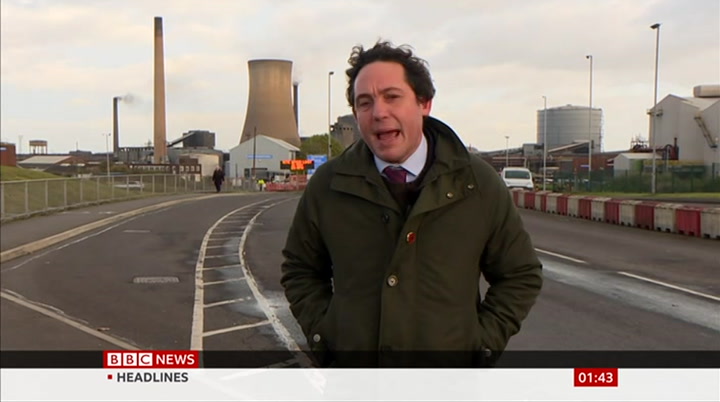 investment plans to be pored over, and we've had false dawns in scu nthorpe before. but folks here are encouraged that the prospective buyer is a steel—maker, not a financial investor — and company that doesn't make some of the products that are made here, so there's commercial logic to it. however, there are still some concerns about the economic and strategic rationale of putting one third of britain's steel production in chinese hands. hello and thanks for joining us on sport today. i'm ben croucher. coming up. rusty rafa. nadal is beaten on his return to tennis after two months out at the tour finals in london. var hasn't pleased everyone in the premier league. we'll hear from the man whose job it is to make it work. and it's a perfect 10 for 0mara durand though —
1:45 am 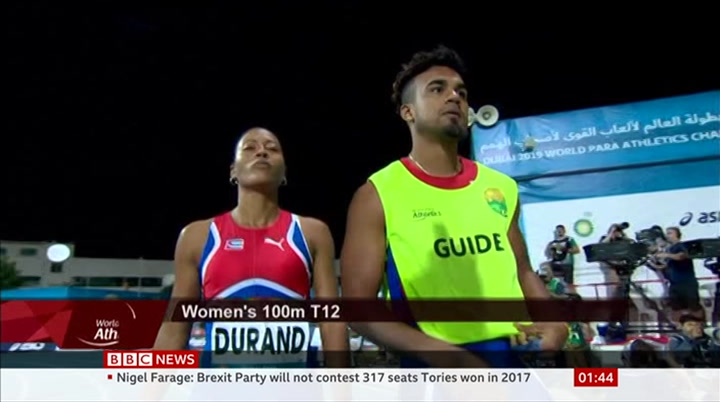 with yet another gold at the para athletics world championships welcome to the programe. world number one rafa nadal admits he simply wasn't good enough after losing his opening match at the end of season world tour finals in london. his 6—2, 6—4 loss to defending champion alexander zverev was his first since a two month layoff — but he refused to blame any physical limitations as zverev brushed him aside in their opening group game. stefanos tsitsipas was also a winner on monday. paul frostick has the best of the action. raphael nadal is the world's number one men's tennis player but the atp final is one where he not reach the summit. no doubt he is one of the best layers of all time but a new breed of talent is on its way through.
left
right
email Borrow Program
tv