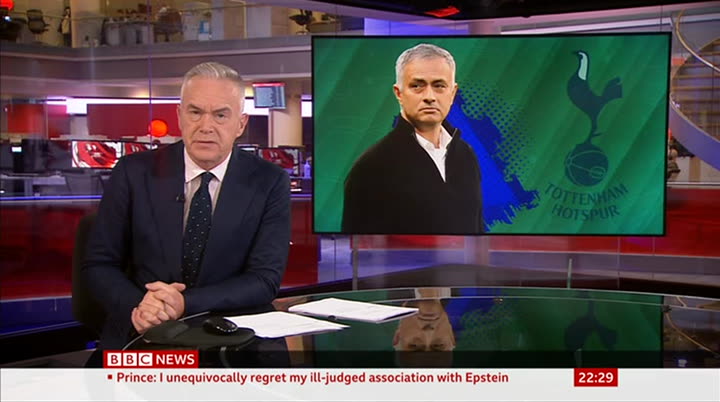 jose mourinho has been named as the new spurs manager, a matter of hours after last night's sacking of mauricio pochettino. mr mourinho, the former boss of chelsea and manchester united, praised the quality of spurs‘ squad and their "world class" stadium, as our sports editor dan roan reports. he brings trophies, but often trouble too. for almost a year, jose mourinho has been on the sidelines, but now, in a move that surprised many, one of football's most divisive figures is back. tottenham hotspur today unveiling the portuguese coach as their new manager. mourinho‘s appointment came less than 12 hours after the sacking of mauricio pochettino. in his five and a half years at the club, the hugely popular
10:31 pm 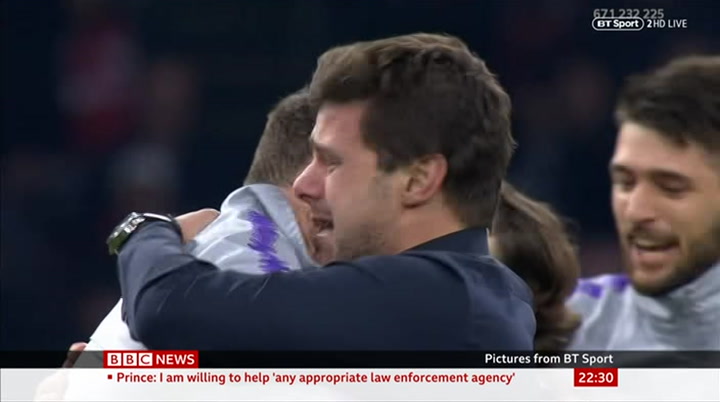 argentinian had transformed spurs into genuine contenders, unforgettably propelling them to the champions league final despite limited spending on players. but amid an alarming dip in form this year and with the club languishing in 14th place in the premier league, chairman daniel levy decided to act. it was a big shock. he's been amazing to work with for the last five years, and it's a shame to see him go. spurs‘ stunned players arrived for training this afternoon with their new manager already waiting for them. this is why he's been hired. mourinho‘s won trophies everywhere he's been. the champions league at porto, three premier league titles in two spells at chelsea, another champions league at intermilan, la liga at real madrid, and the europa league at manchester united. but there the fans grew weary at his style of play. by the time he was sacked, mourinho didn't seem quite so special. he's a dated manager, you know, the way he plays his football, it's of a time gone past. the way he plays his football, i don't think it's the tottenham way. the reason why we are allowed
10:32 pm 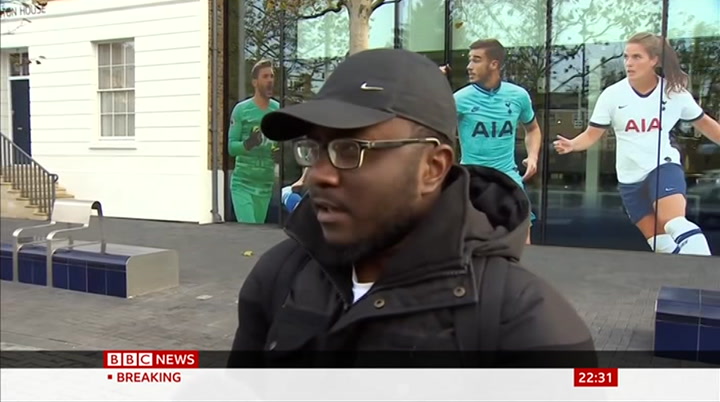 to dream the way we are is because of pochettino. so, to diminish that and completely disregard everything he's done in the last five and a half years is quite disrespectful. never before have spurs hired a manager as demanding or as confrontational as jose mourinho. it doesn't feel a natural fit. but with this £1 billion new stadium and a talented squad, they'll hope he can harness their ambition and deliver the trophies they crave, but it is a gamble. dan roan, bbc news, at the tottenham hotspur stadium. emily maitlis is presenting newsnight on the bbc two right now, with more on that prince andrew story. now on bbc one, time for the news where you are.
10:33 pm 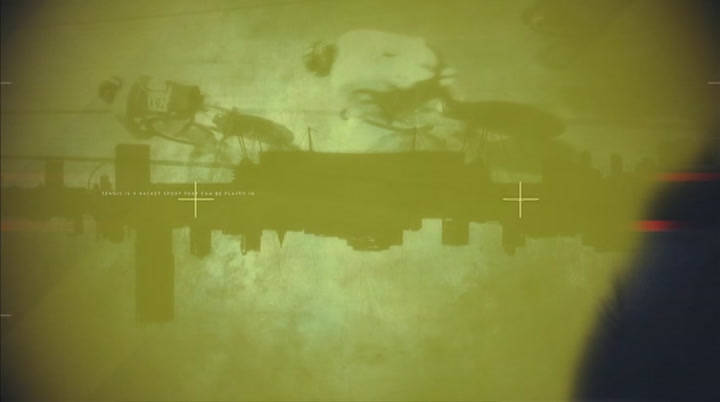 hello. you're watching sportsday on bbc news with me ben croucher. your top stories. jose mourinho promises passion and happiness at tottenham hotspur as he takes over as their new boss. not a bad way to introduce yourself in test cricket. dom sibley and england are under way against new zealand at the bay oval. and great britain are off to a winning start in the new look davis cup — with doubles delight against the dutch. thanks forjoining us. he's been the special one. the successful one.
10:34 pm 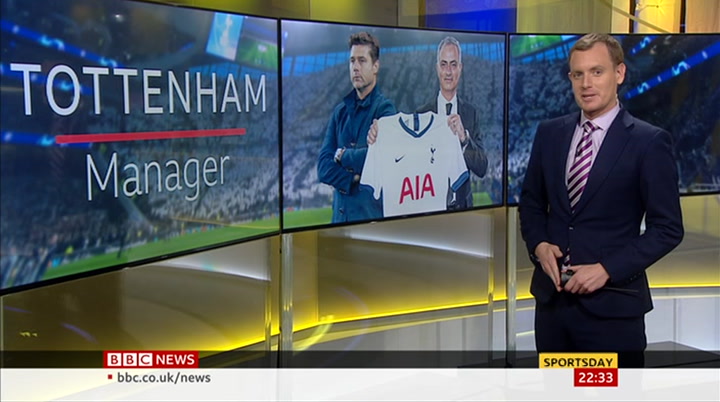 now, he's the spurs one. you're looking at tottenham hotspurs‘ new manager right there. jose mourinho is back in the premier league. 11 months after leaving manchester united, he replaces mauricio pochettino — who was sacked just over 2a hours ago. we'll analyse just what went wrong for poch shortly but let's find out just what spurs fans can expect from one of the most enigmatic men in football. starting sportsday this evening is our editor dan roan. things move very fast and premier league football. another reminder of that. just how ruthless it can be because he did come as a shock to many people in many spurs fans that despite the reported unrest and tension that had been developing between pochettino and the board, given the progress that is been made during the five and a half years and given how popular he is, i think it
10:35 pm 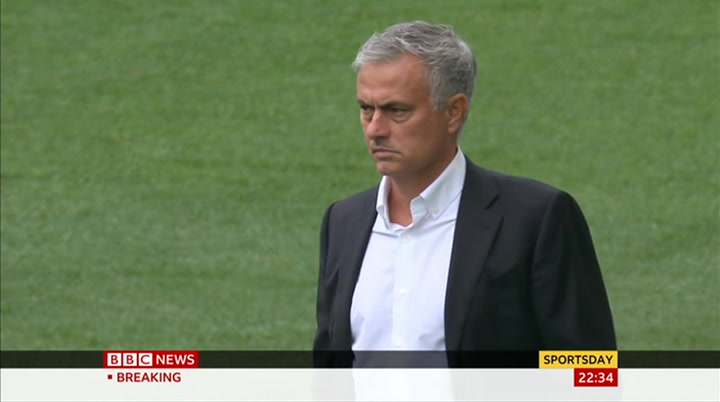 still came as a shock and then of course for him to be appointed within 12 hours of that news breaking does seem extremely quick but they have been talking to the spurs for some days, it is not something that happened in the wake of that decision but the players when they arrived, mourinho was waiting for them. it seem like a big surprise because mourinho does not seem a natural fit, surprise because mourinho does not seem a naturalfit, he is not a man known to be happy to operate within the tight budget which the spurs have insisted on recent years. pochettino had to handle with that. but the experience when mourinho was sacked, nonetheless, ithink but the experience when mourinho was sacked, nonetheless, i think it is a statement that a sign of their ambition behind me, very talented squad. perhaps they feel they are at a level where mourinho could harness their ambition and get the trophies
10:36 pm 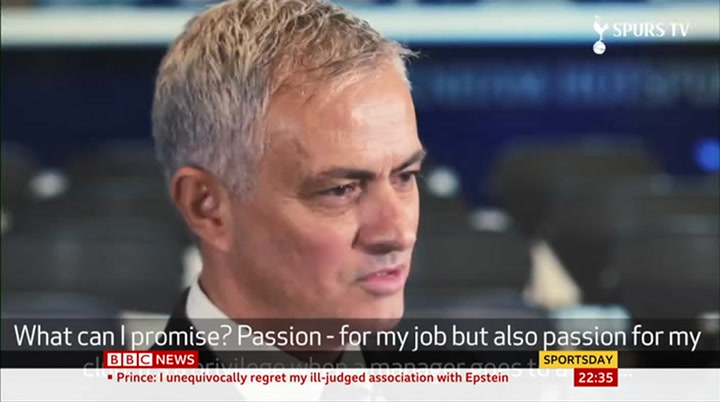 that they crave. what can i promise? passion. from myjob, and my club. and when the manager goes to
10:37 pm 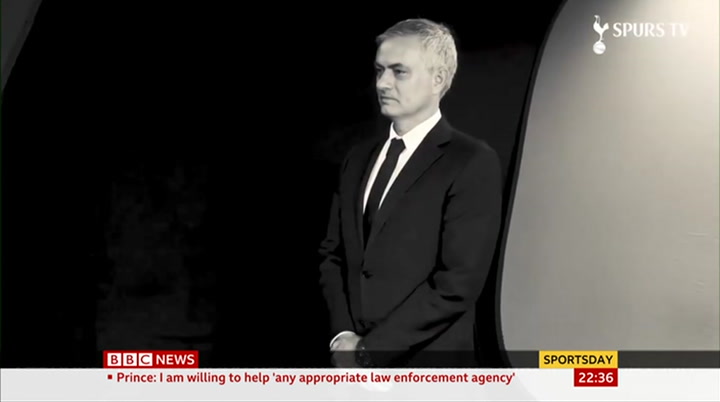 i have beenjoined by rachel martin who was on the board of the supporters and rachel, your trust issued a statement earlier, but did they say? we issued two statements, expressing shock and regret and sadness about the departure of pochettino and his team and great gratitude for all that they have achieved. today, really the statement was saying that given what has happened, we are glad that the board is not going to drift to the end of the season. some of tottenham wa nt to end of the season. some of tottenham want to know how is this going to work? does mourinho really understand the dna of the club and i'm sure that the dna will the same? it has been built on legends and it is not necessarily what we think
10:38 pm 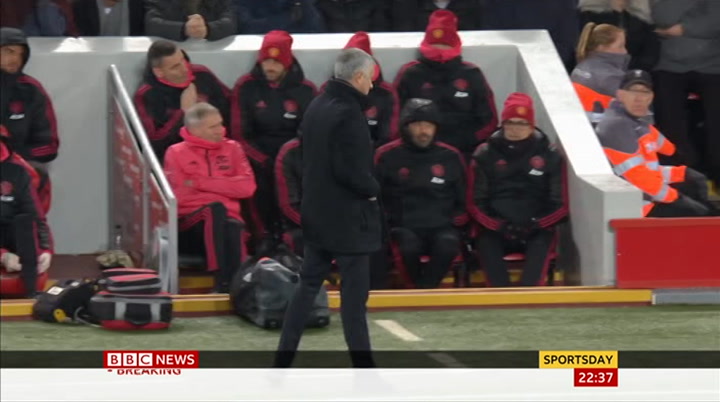 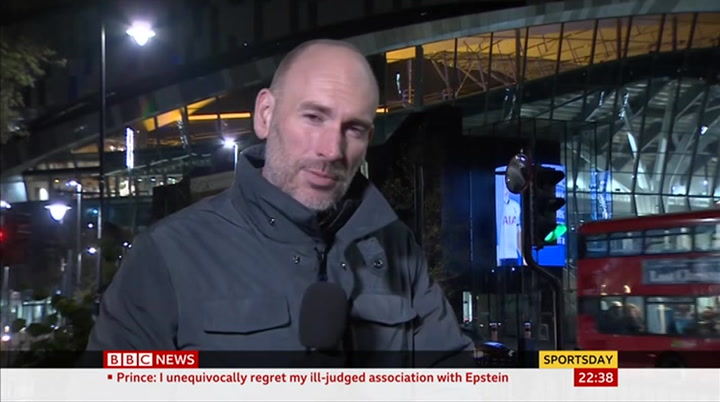 office and has won many trophies. that, despite all of the progress, that pochettino did not achieve, the hope will be that now that mourinho can get into the spurs approach and deliver the success that they have wa nted deliver the success that they have wanted for so long. so what next for mauricio pochettino? well he's been linked with pretty much every top job in european football. real madrid, psg, manchester united. is he that highly sought after? former spurs midfielder michael brown has been giving his verdict to gavin ramjaun. there will be a host of clubs, and the summer he was in real high demand, and could have gotten that for him, pointing out question to say is that his managers, we need to change that from manager to head coach, and he is not responsible for certain things. and interviews recently, he has also been a little bit unsure. he does not look like
10:40 pm 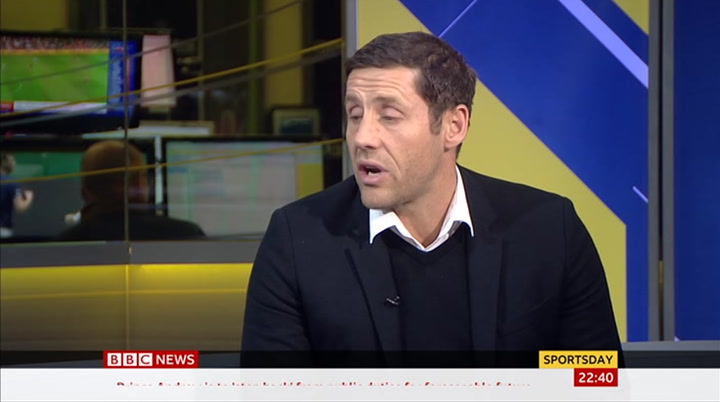 stability, can he do that because they've got the players. let's quickly run through some of the other football stories catch our eye today. ten—man tranmere rovers overcame wycombe wanderers in the pick of tonight's fa cup first round replays. kieron morris got the goal in extra time. elsewhere there were wins for ipswich, newport and walsall. gareth bale could be in more hot water at real madrid. he posed with a flag, that read ‘wales, golf, madrid... in that order‘ — during wales' 2—0 win over hungary, which saw them qualify for euro 2020. bale's been criticised in spain, for prioritising international football and golf, over club duties. former england womens manager, mark sampson, has been charged with using racist language by the football association. sampson, who's now caretaker boss of stevenage, had been subject to an fa investigation since september after an allegation by a former coach at the league two club. mount maunganui is hosting its first test match today as new zealand and england
10:42 pm 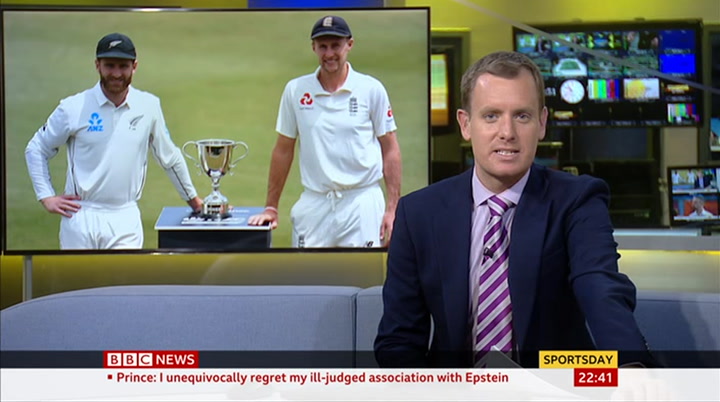 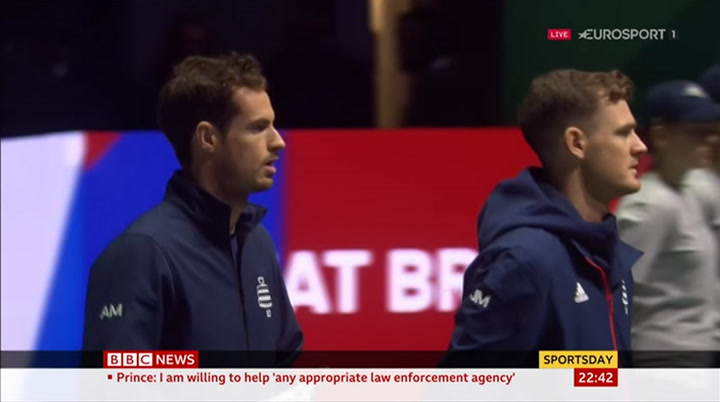 britain would need to win for five consecutive days if they're going to retrieve the trophy that they went backin retrieve the trophy that they went back in 2015. rejuvenated andy murray, the dutchman played tennis that the latest status winning the first set. he had admitted to putting on weight after the birth of his third child, but burned off some of the fat by breaking the dutchman first game and giving the british fa ns first game and giving the british fans the opportunity to burst into song. he soon add more to rejoice over when they leveled the match in britain were back in business. the power and precision returned, along with it another nail—biting tie—break, a three—time grand slam champion summoned another gear and gave britain a victory that he later said that he did not really deserve. dan evans would have won the tie for britain had
10:44 pm 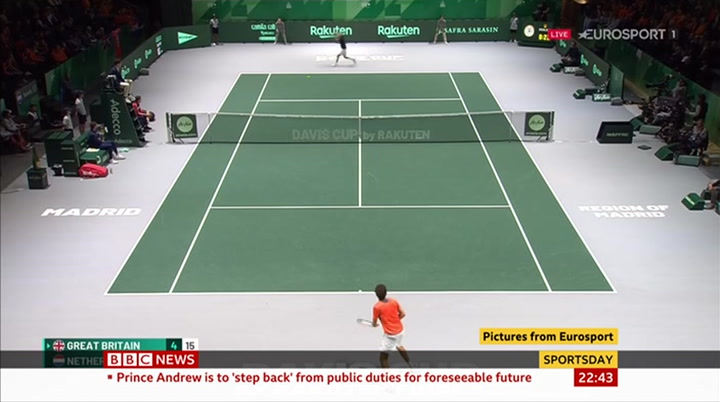 he beaten robin haase, he made a great start taking the first set 6—3. but haase fought back, levelled the match on a tie—break before going on to win the third set 6—4 and make it all square it all came down to the doubles with jamie murray teaming up with neil skupski. a straight sets win sealed the victory for great britain, with a second set tie break going the way of the british pair. captain leon smith heaped priase on his doubles team after the match. jimmy has got some experience in big matches and he stepped up to the plate and allowed neil to really flourish as well and he did a great job. it is not easy playing the deciding number, this is his first ever and he excelled. they play kazakhstan tomorrow morning. let's finish sportsday where we started it. reflecting on a hectic couple of days for spurs and spurs fans.
10:45 pm 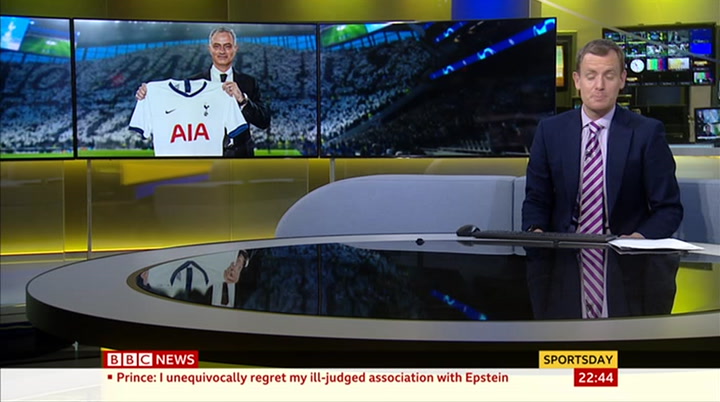