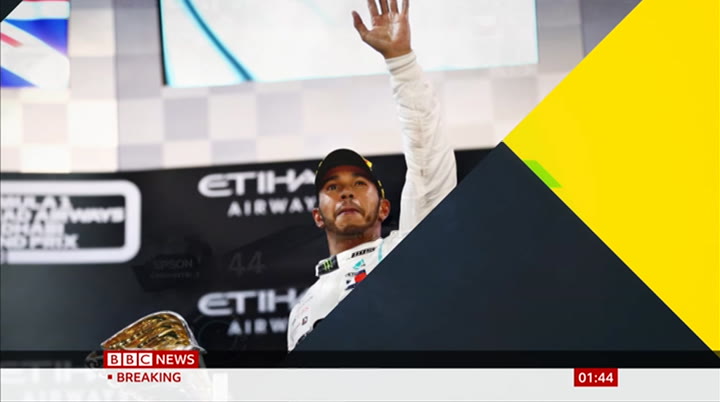 winner to beat sampdoria in sardinia. while after securing a sixth formula 1 title, could lewis hamilton be tempted with a new challenge away from mercedes? hello and welcome to the programme, where we start with the news that the ballon d'or awards have been handed out in paris with lionel messi and megan rapinoe claiming the respective men's and women's trophies. both players also won their categories earlier this year in the best fifa player of the year awards. and the win for messi comes just 2a hours after he scored the winning goal for barcelona in their la liga win over atletico madrid. it's a record sixth time the 32—year—old has taken the award and comes ten years after he won it for the first time.
1:46 am 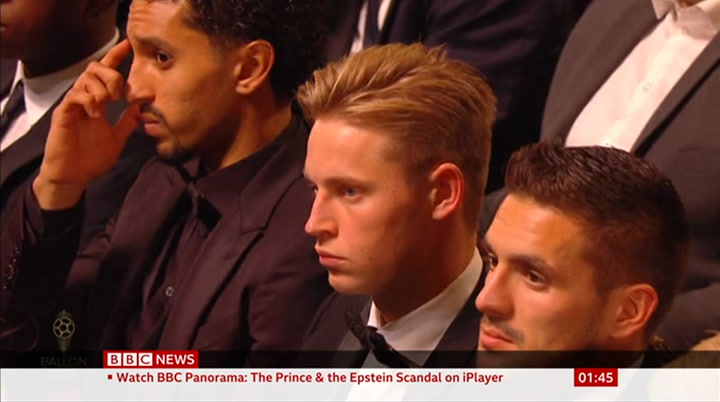 translation: ten years ago, i was awarded my first ballon d'or here in paris. i remember i came with my three brothers. i came with my three brothers. i was 22 years old and everything that was happening to me, it was unthinkable. now, ten years later, i have received the sixth one in a totally different and special moment in my personal life, with my wife and my three sons. while megan rapinoe won the women's award in a year that saw her claim a second fifa women's world cup with the usa as they hoisted the trophy aloft in france. the 34—year—old co—captain of her country is also known for being an activist and an advocate for numerous lgbt organisations. i mean, like, i can't believe i'm actually the one winning it in this field. it's been such an incredible year and women's football is lucky to have every single one of these amazing players every year. and it pushes us and pushes me to be the best player that i can.
1:47 am 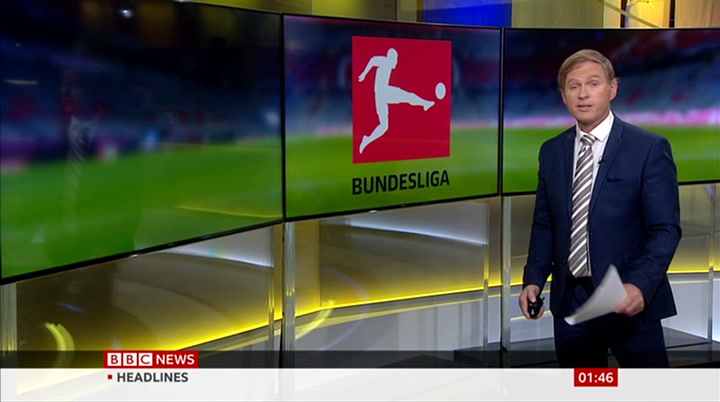 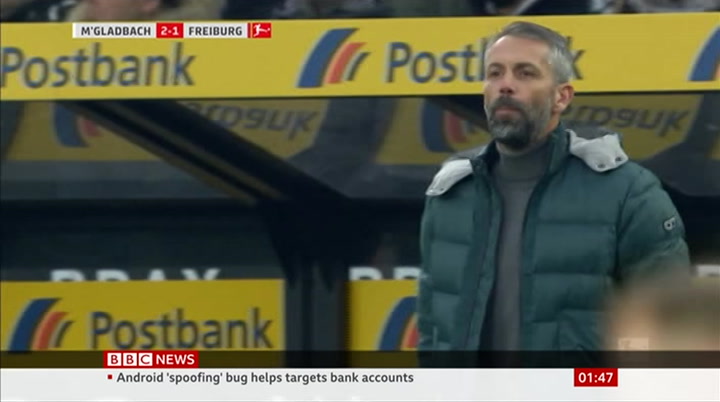 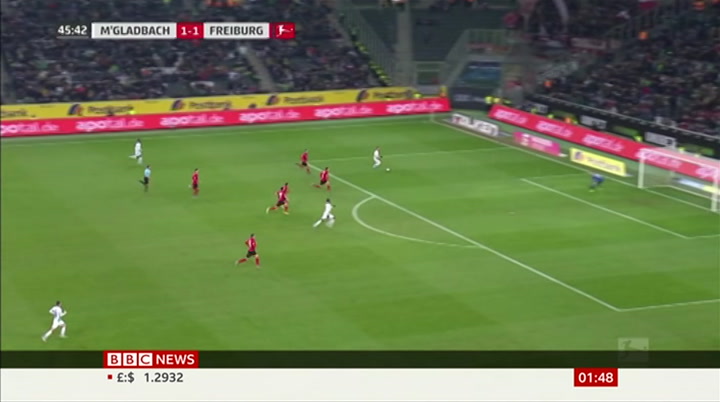 their commitment to youthful exuberance in football. but if they are to stay the course, they will need to become thoroughbreds. patrick geary, bbc news. one match on monday and that saw mainz move up three places to 12th and put some distance between them and the relegation zone. they were came from behind to win 2—1 at home to eintracht frankfurt. in italy's serie a — cagliari scored a dramatic 4—3 win over sampdoria that keeps them fourth. after fabio quagliarella scored his second to make it 3—1 to the visitors with only 20 minutes remaining it looked as though the team just two points above the drop zone would claim the win, but a joao pedro double in the space of two minutes shortly after saw matters level until alberto cerri scored the winner six minutes into stoppage time. in the fa cup, there are a couple of standout third round ties which involve premier league teams.
1:50 am 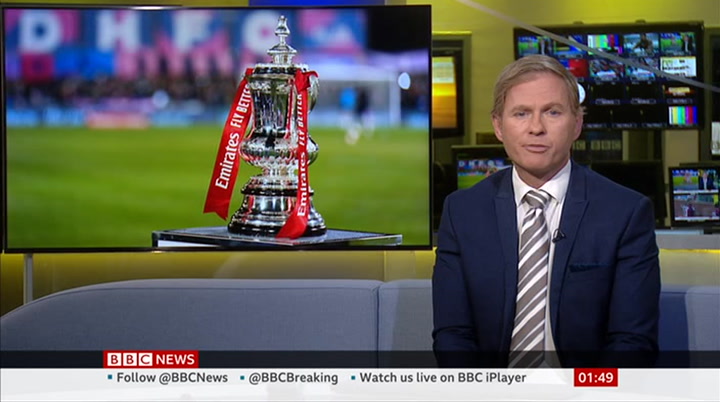 liverpool and everton who meet at anfield in the league less than 48 hours from now will face each other, again at the home of the reds. while manchester united head to wolves who knocked them out of the tournament at the quarterfinal stage last season. the future of formula i world champion lewis hamilton is the subject of intense speculation, after the final race of the season in abu dhabi. ferrari driver charles leclerc has said he would welcome britain's six—time world champion tojoin him at the team — so is it likely? here's our fi reporterjenny gow. anything is likely when it comes to lewis hamilton. he can do what he likes. his hugely successful, as a brand, his very importance of formula i and to the team as well. mercedes want to do all they can to keep him. the head of motorsport for mercedes, he reckons that 25% does
1:51 am 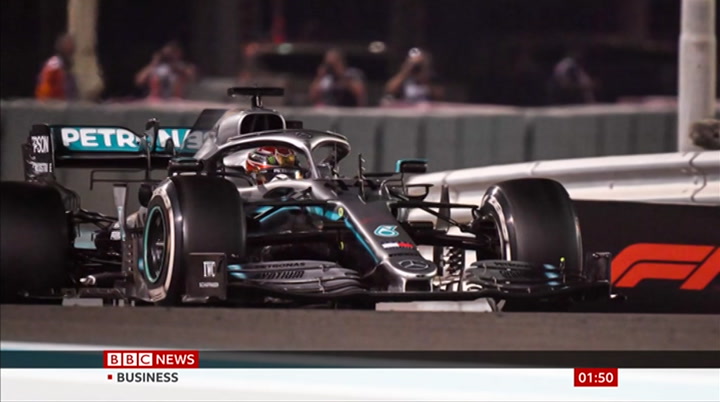 make there is a 25% chance of him leaving to ferrari. they have been chuffed about the chance lewis hamilton has met up with ferrari chairmanjohn hamilton has met up with ferrari chairman john ullman, that hamilton has met up with ferrari chairmanjohn ullman, that has neither been denied or agreed to. so i think we have to watch this space. but it's important to say at this point in time, lewis hamilton during his contract negotiation with mercedes. how much of this is generated by lewis to drive up his price, his likability, his contract details, and how much of it is actualfact? anthonyjoshua says he chose to reinvent himself after defeat by andy ruinunior and feels different going into saturday's rematch. joshua lost his three world titles to ruiz injune in a shock defeat. this fight will take place in saudi arabia but the lack of a home advantage doesn't bother the british fighter. i don't know about home advantage because it's a fight, innit?
1:52 am 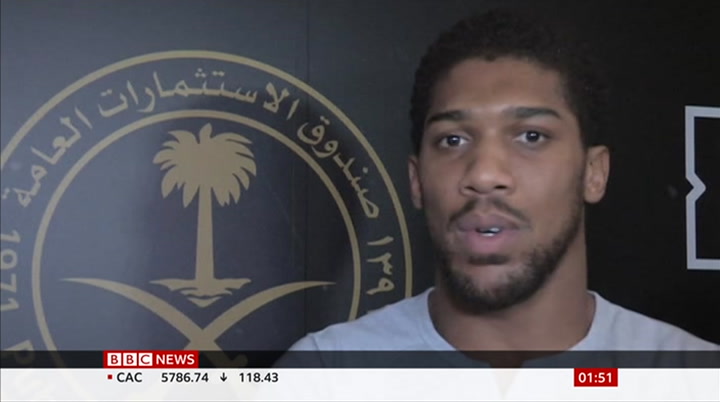 do you know what i mean? so, i don't think home advantage matters, especially at this weight in the heavyweight division. so, all good, so be it, wherever it was going to be, i'm going to go in with that mindset of a winner. it feels amazing, you know, this is what i've been working for my whole life and it's just a dream come true. i made my dreams come true, all this hard work and dedication that i've been doing since i was six years old. and it finally paid off and i know i've still got more history to do and that's going to be december seventh. in cricket news, new zealand and england are heading for a draw on the final day of the second test being played in hamilton. black caps skipper kane williamson and ross taylor have put on a partnership of more than 150 for the third wicket and are building a steady lead as england chase an improbable win to tie the series. there's been a big shock at the uk
1:53 am 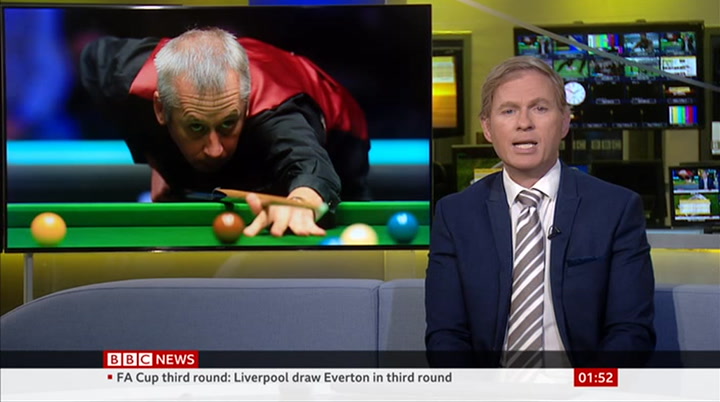 snooker championship, the world number onejudd trump's been knocked out in the third round by 54—year—old nigel bond. the englishman was runner up at the world championship in 1995 came from behind to win six frames to three and end trump's bid to become the fourth man to hold all three major snooker titles at the same time. he's the man of the moment and, you know, it's just — he's the man of the moment and, you know, it'sjust — i'm 5a, what am i doing? i played some good stuff, really, probably took a bit to settle, but once i settled, ifelt good, missed one or two, which obviously helps, but i was just going out there to give a good account of myself, really and just show people that i can still play when it's there, you know? now you may think being a 20—time grand slam tennis champion, means you'll be minted. and you would be right! roger federer has become the first
1:54 am 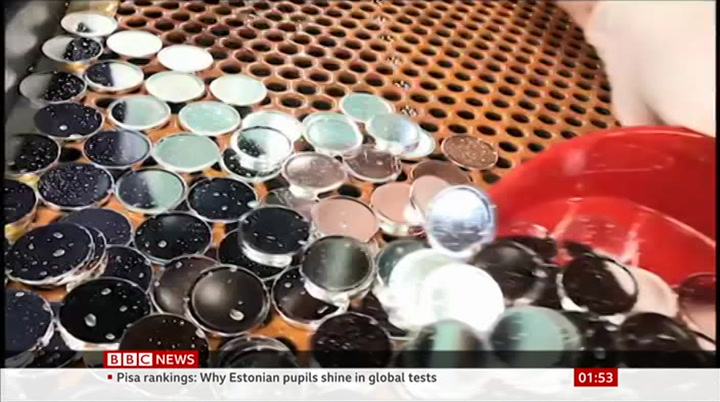 living swiss person to feature on one of the country's coins. the swiss mint has released these pictures of the very special coin being made. the 20 franc coin went on sale on monday and the website struggled to cope with initial demand. it will be followed by a 50 franc version next year. plus, in the nfl third place in the nfc seattle seahawks host fifth placed minnesota vikings getting under way in the next couple of hours. you can get all the latest sports news at our website, that's bbc.com/sport. but from me and the rest of the sport today team, goodbye. and the cricket in hamilton has been delayed, new zealand are on 241—2 with that rain delay leading by mo, it looks like it is heading to an inevitable draw. new zealand lead the series 1—0, their second and final test. bye for now.
1:55 am 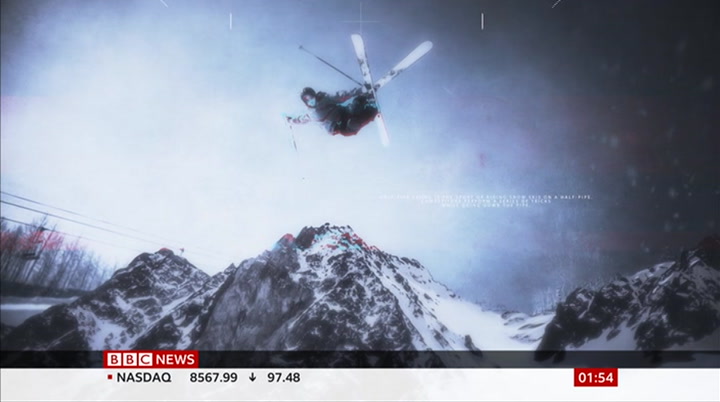 hello. monday's mildest weather was found in the far north of the uk. and it's not that often we get to say that! whereas many areas stayed chilly, just one degree in parts of mid wales, highland scotland saw temperatures climbing all the way to ten degrees because of a feed of south—westerly winds from the atlantic, bringing a lot of cloud, bringing some outbreaks of rain, but also bringing some milder air, which stays in place across northern areas to start tuesday, while southern areas have something much colder. so nine degrees there in stornoway, compare that with freezing in london. some spots a few degrees below freezing, and with the potential for some fog. a met office yellow warning was issued for the risk of some dense fog patches in an area that
1:56 am 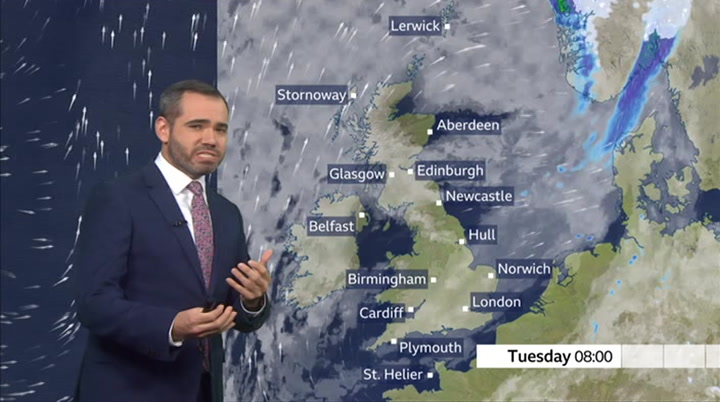 includes some key motorways and some major airports as well. and even if it isn't foggy, it's likely to be quite grey and murky, with some low cloud in places. so, poor visibility could cause some disruption and some of that fog could be quite slow to clear. but generally speaking across england and wales we should see some sunny spells developing. whereas for northern ireland and scotland, there will be a lot of cloud, best of the brightness, i tihnk, across north—eastern scotland, eastern counties in northern ireland. still a south—westerly wind here, so ten degrees in stornoway, also 11 down in plymouth, but in many spots, we will have single digit temperatures once again. now, as we move through tuesday night into the early hours of wednesday, again there is potential for fog across central and eastern and southern parts of england, another chilly night and chilly start to the day here. further north and west, milder, but with some extra cloud, more of a breeze and some outbreaks of rain thanks to this frontal system here.
1:57 am 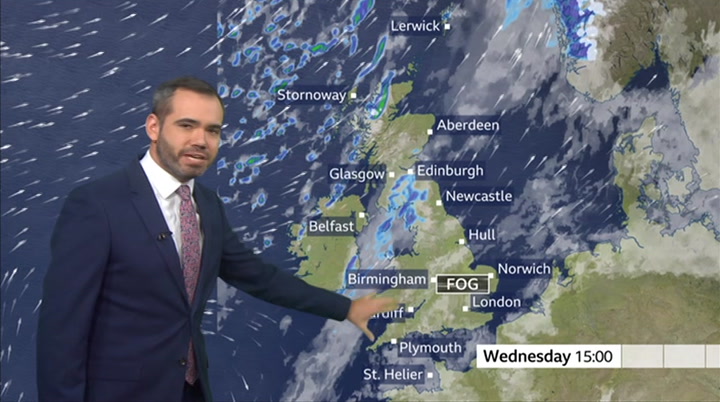 this will be working its way in from the west as we go through on wednesday and you can see quite a few light lines, quite a few isobars on the chart, there will be strong winds across north—western parts as well. that rain getting to scotland and northern ireland, eventually into the far north of england, further south and east some of that fog to start off, which could be slow to clear. then we see some sunny spells. again, single digits for most but in the far south—west, the far north—west, we'll be up at 10—11 degrees. now, as we head into thursday, we're going to see persistent rain piling on in western scotland, perhaps enough to cause some problems, maybe some localised flooding. it's going to be a windy day for many, particularly in the north—west. steady wind speeds you can see there in the arrows, gusts of 50—60 miles an hour. further south and east, not as windy, and again we'll see some spells of sunshine. nine degrees there in london, but many more spots in double digits by this stage. and it will be milder for all of us by friday, but still quite windy with some rain at times.
1:58 am 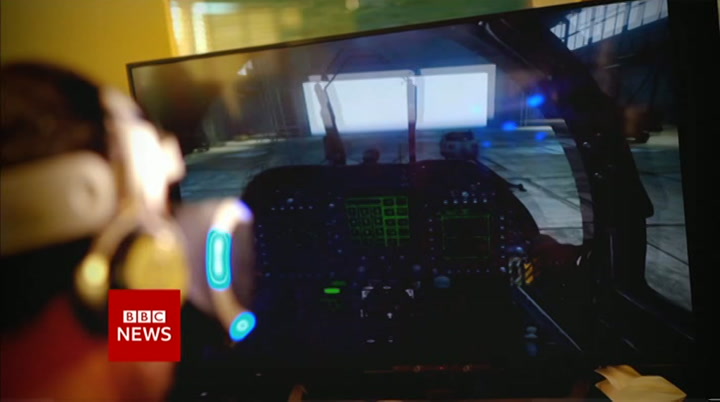 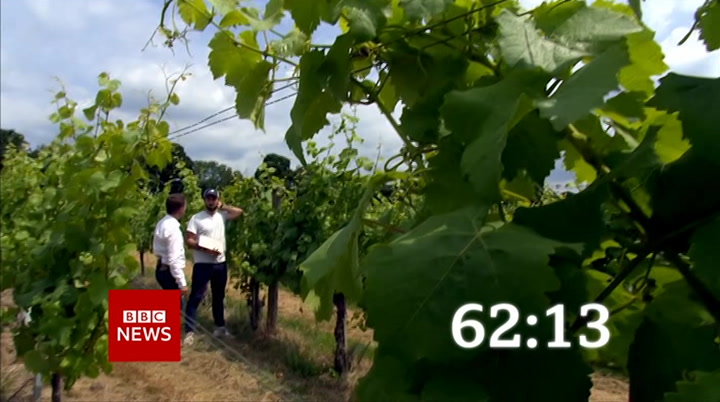 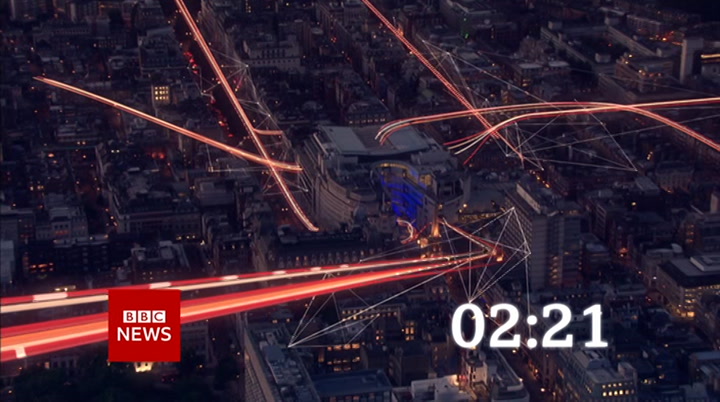 welcome to bbc news. our top stories: five women make sworn statements in the united states alleging prince andrew was present when they gave massages to the convicted sex offenderjeffrey epstein. mass evacuations as typhoon kammuri makes landfall. we are live in the philippines with the latest. a vigil is held for the victims of the london bridge attack, attended by family, friends and political leaders. the fears of some countries are heard at the madrid meeting on climate change.
left
right
disc Borrow a DVD of this show DVD
tv