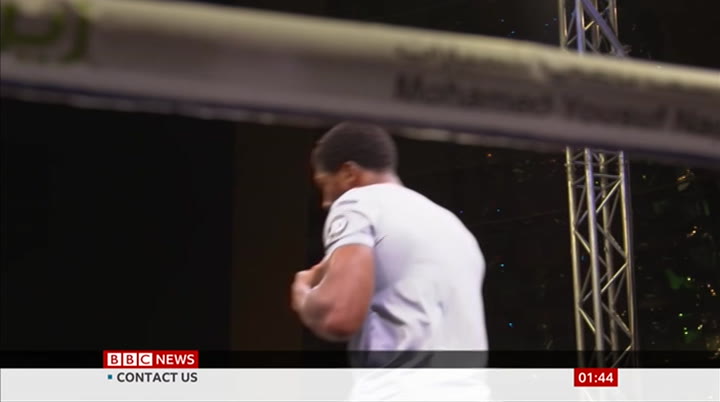 to eight points. after a seismic shock in heavyweight boxing, can andy ruinunior upset anthonyjoshua again? we'll be in saudi arabia ahead of the weekend's blockbuster. and defending champion ronnie o'sullivan is through to a last 16 clash against china's ding junhui at the uk championship. hello and welcome to the programme, where we start with the footballing news that manchester city have narrowed the gap on premier league leaders liverpool to eight points after a crushing 4—1 win over burnley at turf moor. pep guardiola's side can ill afford to lose anymore ground on their title rivals and it was a double to brazilian international gabrieljesus that set them on their way to the victory.
1:46 am 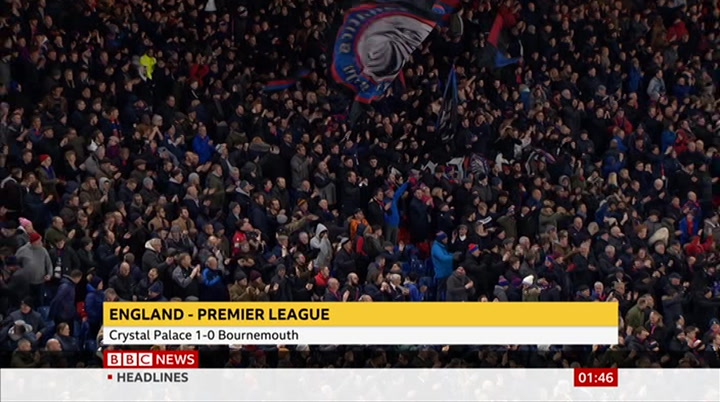 isaid, the i said, the last four or five fixtures also, when liverpool never lost. so thinking of ourselves in the next game. thinking about how many wins we have to do. what we have to do is prepare for the derby on saturday. hopefully our friends can help us make a good game. hopefully we qualify, get minutes to play and keep going. december is a crazy month. we need to get back in. crystal palace have moved up five places to fifth beating bournemouth 1—0 at selhurst park despite mamadou sakho being sent off less than 20 minutes into the game for a high challenge. ghananian international jeffrey schlupp scored the winner with just under 15 minutes remaining for roy hodgson‘s side. there's no champions league football this week with our attention turning to the coppa italia and premier league. and it could be a pivotal few days for a handful of coaches in england's top flight. with a number already kicking their heels, some are skating on very thin ice as the winter chill hits hard in the country. it's not much fun —
1:47 am

as michael redford can tell us gone, gone, gone. three premier league managers sacked in 12 days and that might be more to come. the managerial merry—go—round is in full swing. quique sanchez flores was the most recent dismissal. leaving bottom of the table watford. now looking for their third managerfor the season, watford will head to leicester hoping the only way is up. leicester are very much on the up as though mount a surprise title challenge. they have a manager problem of their own, though. their boss is in demand. arsenal reportedly want brendan rogers. he insists not going anywhere the state he is going nowhere. so if not rogers then perhaps nuno espirito santo. he is apparently on arsenal's radar as well. after they sacked unai emery. for now though, santo appears happy at wolves. and they host west ham on wednesday, who are far from happy. a weekend win at chelsea may have
1:48 am

brought manuel pellegrini time but his west ham bubble mightjust be close to bursting. mauricio pochettino‘s bubble burst at tottenham almost two weeks ago and he's already been replaced. jose mourinho back for a third spell in english football. and looking for a third successive league win. to do that, he will need a victory in familiar territory, return to old trafford for the first time since being sacked by manchester united. last december. two months on, and his successor could now also be heading toward the exit but he is not concerned. sometimes you love, you know, when you read stories about what i've said and staff. at least i know the sources that everyone is talking about, though not sources. they are just made up blatant lies. frank lampard is enjoying himself at his former club, chelsea, with his side forth in the league. although he will be looking for a reaction at home to aston villa after actor back leg defeats for the first time this season. marco silva has been looking for a reaction from most of the campaign so far. he has rarely found it. a last—minute loss at leicester live seem reportedly on the brink of losing his job at everton.
1:49 am 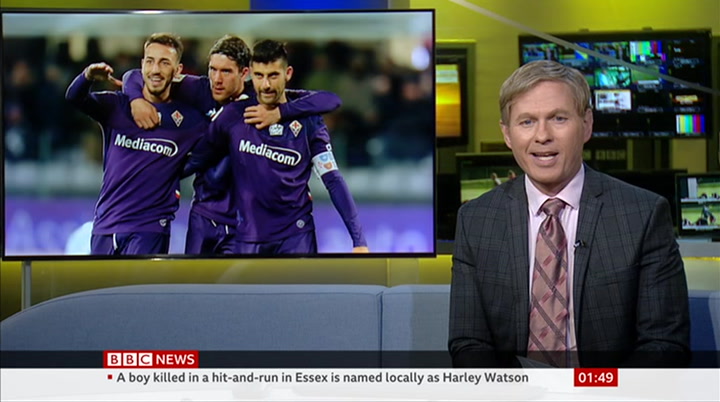 he's in need of a nice is a game, instead they will travel to local rivals and league leaders, liverpool. tough timing. should they lose, everton could and the date into the relegation zone. if southampton beat norwich. ralph hasenhuttl it is hanging on at st mary's, nearly six weeks on from that 9—0 threshing by leicester. norwich are also in the bottom three. no speculation about their manager the, with daniel farke firmly fans favourite, for now. in the managerial merry—go—round, things can change quickly. michael redford, bbc news. there were three fourth round matches in the coppa italia on tuesday with fiorentina among those moving through to the last 16. they were comfortable 2—0 winners over second tier citadella thanks to a marco benassi double and they'll now take on high flying atalanta for a place in the quarter—finals while cremonese will go up against reigning champions lazio after a 1—0 win over empoli, with genoa needing two late goals to triumph over ascoli. marseille kept up their ligue un pursuit of paris saint germain with a 2—0 win over angers
1:50 am

whilejosh maja notched a hatrick for third placed bordeaux in a crushing win over nimes. lille made sure that second, third and fourth place all picked up maximum points while brest also won out hammering strasbourg lifting them up three places to 12th. staying with football and the former arsenal manager arsene wenger was at the annual meeting of the international football association board in belfast on tuesday. wenger was appointed fifa's new chief of global football development last month. but despite his new role, wenger said he's more than happy to advise arsenal's new caretaker manager freddie ljungberg as he begins his career at the emirates. i want them to do well and i wish freddie well. he has wanted to do thisjob for a long time. he has got an opportunity and let's get him to work with his ideas and let's
1:51 am 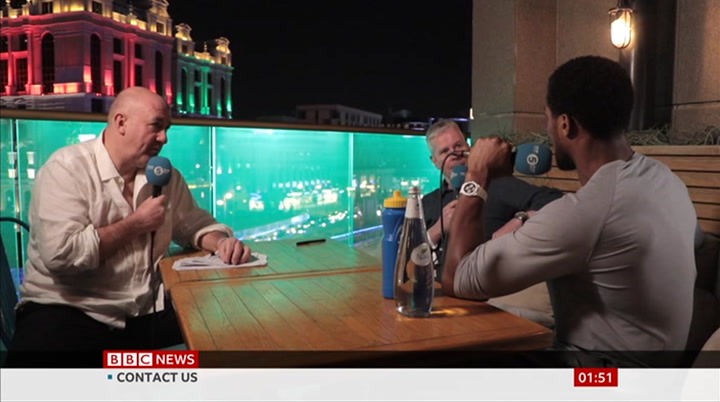 support him. it's being billed as the clash on the dunes as saudi arabia hosts the biggest heavyweight fight of 2019, the rematch between andy ruinunior and anthonyjoshua. it comes six months after ruiz‘s shock world title win in new york — notjust inflicting the briton‘s first defeat as a professional, but the manner of it reverberated around the sporting world. well they're back to do it all again on saturday and joshua says he's fully prepared this time around. it was an unknown test, i give the man his credit, he was victorious, well done to him for that. now it's my turn to kind of right my wrongs. he thinks he is probably going to do the same thing and get the same result, but i have had to check myself, reinvent myself to a certain degree. not physically, i have always been dedicated to the gym. mentally, understanding exactly what i'm doing as soon as i step into that boxing ring. well, earlier our reporter ade adedoyin gave us a flavour of how they're both feeling ahead of the weekend. anthonyjoshua anthony joshua found himself anthonyjoshua found himself unusual
1:52 am 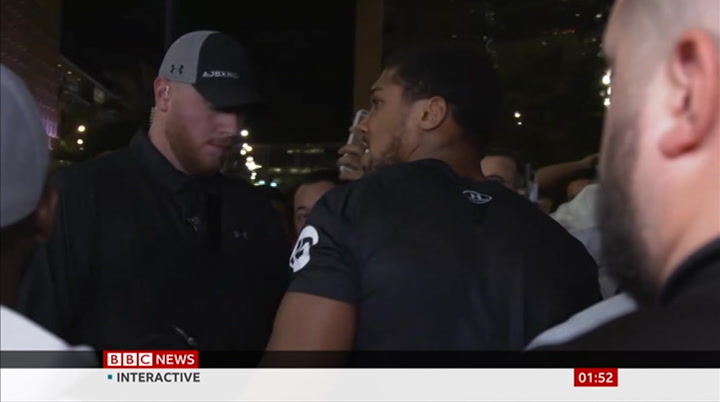 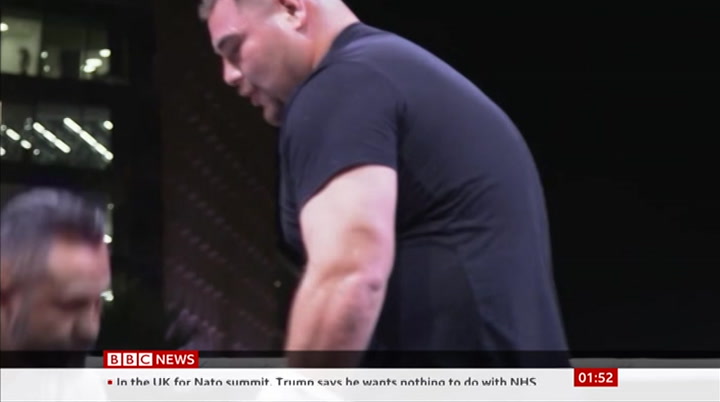 they are making him the underdog once again and he said his mindset has not changed and we will shock the world again. i have to remain champion. a lot of responsibilities oi'i champion. a lot of responsibilities on my hand. all the hard work and dedication is finally paying off. now it is time to have fun. they are still making you the underdog? they show are but that is why i have to prove everybody wrong. a final head—to—head press conference on wednesday. the buildup has very good natured and respectful but it will be interesting to see whether either man tries to up the ante. to snooker, where ronnie o'sullivan is through to a last 16 clash against china's ding junhui at the uk championship at the york barbican. the 43—year—old beat thailand's noppon saengkham 6—2 in the third round, dropping his first frames at this year's event. victory in the championship would see o'sullivan win the trophy for an eighth time but he struggled with a foot injury.
1:54 am 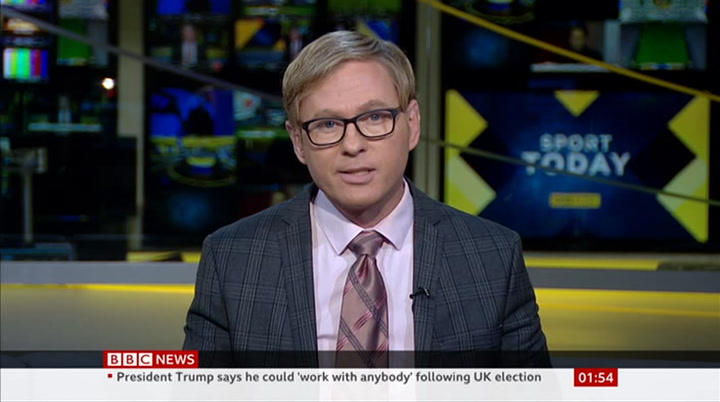 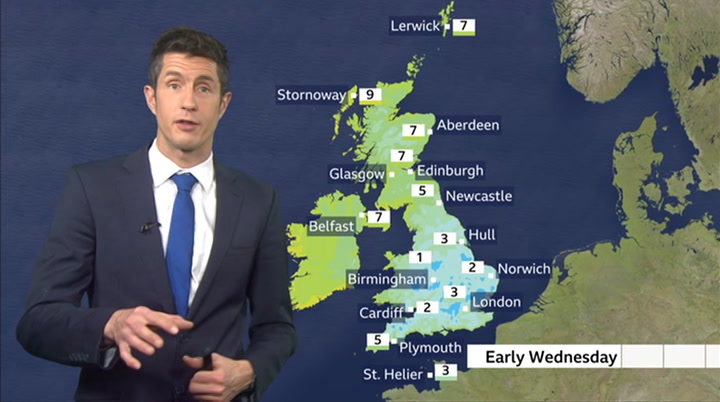 coming our way for wednesday. a stripe of weather is approaching that will bring some rain. this is a weather front that's going to be bringing rain across western areas through the day. further south and eastwards, high pleasure still influencing the weather across england and wales, where the skies are relatively clearer. now, if you'r heading outside over the next few hours, a bit of rain working into north—western areas, with strengthening south—westerly winds. further south and east with there are going to be some patches of cloud, there are also going to be clear spells. so contrast in temperatures, it's mildest towards the north—west of the uk with clear skies across england and wales, it's cold indeed, enough for frost, maybe even the odd fog patches to start the day on wednesday as well. for many, though, it's a bright start across england, wales, northeast scotland, and the rain will continue to push eastwards, reaching parts of northern england and north wales through the course of the afternoon. still bright to the south and east but it's chilly, still. highs of around 6—8, the mildest weather towards the north—west with blustery showers following into western scotland. and through thursday and friday,
1:56 am 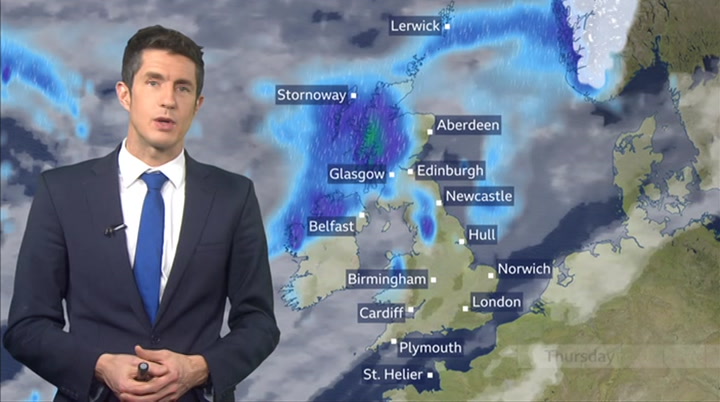 we are going to see weather fronts really target western scotland, bringing large amounts of rain here. we could see 70—80 millimetres, it may be more than that over high ground, but is enough to cause some flooding impacts. but it isn't the only place we will see some rain. on thursday, wet weather pushing across northern ireland, and the rain getting into northern england and northern wales, too. more cloud around on thursday but it should be bright enough. milder as south—westerly winds spreading across more the country. most between 9—12 degrees. what follows on thursday will be a very mild night, it might come as something of a surprise especially when you consider recent nights have had sharp frosts. as we head into friday morning, these are the kind of temperatures, 11—12 degrees. it is so mild as it is cloudy, wet and windy. initially we have the winds coming in on a south—westerly direction. but later in the day we will get these north—westerlies following in across the northern half of the country. temperatures will be dropping away. seven in stornoway,
1:57 am

mild for the midlands, east anglia and southern england, temperatures around 12—13 degrees. now the weekends looks like this. a ridge of high pressure to start things, sunday sees a weather front moving across the uk. so, saturday looks like it will be the better day of the two on the weekend, perhaps a bit of rain getting into northern ireland later in the day. sunday looks like it will turn more widely unsettled with rain at times. that's your weather.
1:58 am 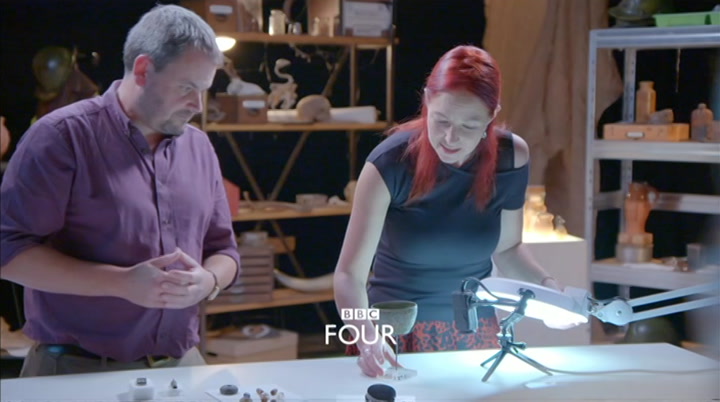 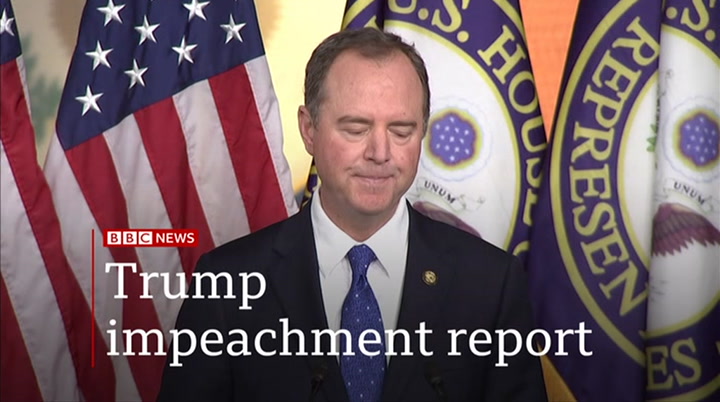 welcome to bbc news. i'm mike embley. our top stories: the us house intelligence committee releases its impeachment inquiry report, accusing president trump of putting his interests ahead of america's. he was willing to sacrifice the national security of the united states in order to get what he wanted. the co—founders of google, larry page and sergey brin, are stepping aside from running the company. the tech billionaire elon musk tells a court he did not literally call a british cave diver a paedophile. and the winner is — all of us. the turner art prize is awarded to the four shortlisted artists after they declare themselves a collective.
left
right
disc Borrow a DVD of this show DVD
tv