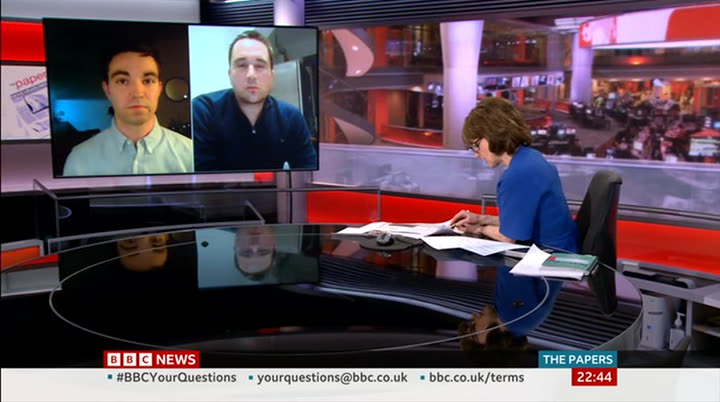 guardian, it does interesting in the guardian, it does state calls were growing yesterday for the government to announce a windfall tax on oil and gas companies to help struggling households in the government has maintained that it would be unwise to tax these companies because the money is needed for investment in green energy and renewables. do you think we might see a u—turn, though? potentially you could see public sentiment shifting. there is this horrible dilemma for the government because obviously you are facing these times where there is expectation that government should step in and obviously they have stepped in during the pandemic and they have stepped in and listen to some of the energy crisis and the expectation that should step in again but obviously they have got to actually get money coming into the exchequer, so very difficult dilemma. but what he is in this government if they do change tack quite regularly so you might do something again after this windfall tax and you can imagine the public
10:46 pm 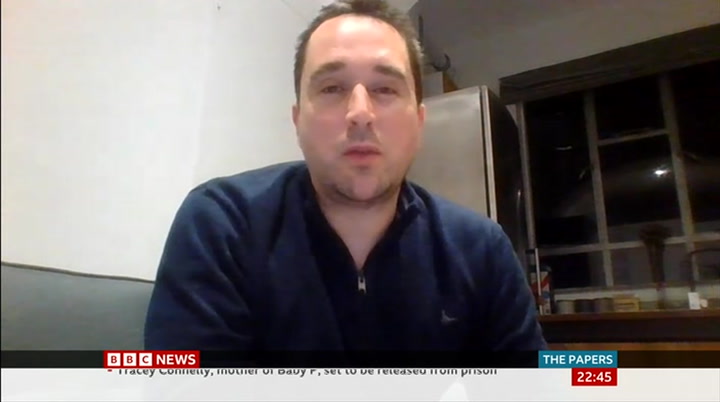 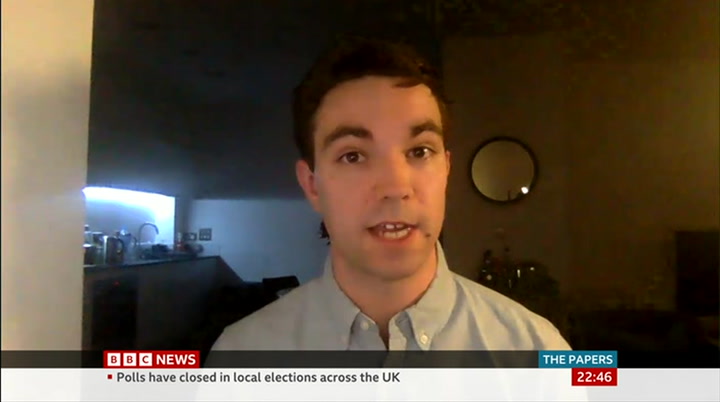 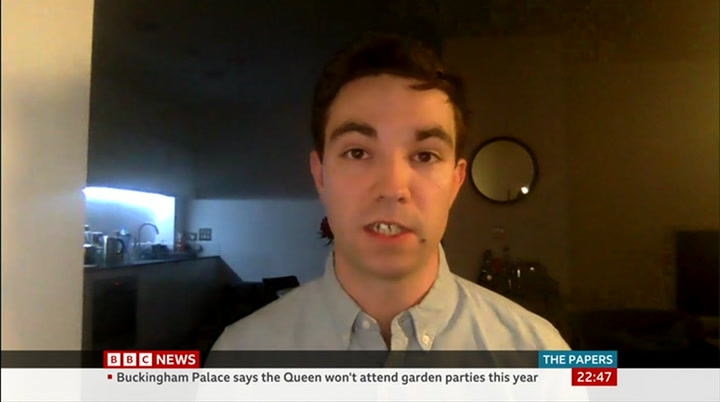 good evening. this is your update from the bbc sport centre. rangers are into the europa league final thanks to a late third goal against rb leipzig. it was incredible performance at ibrox, the side coming back from a first—leg deficit. but a night to forget for west ham, who had a man and their manager sent off in their loss to frankfurt. joe wilson reports. fireworks in frankfurt, british teams everywhere, three european semifinals, two different competitions. one deep breath. right, first to glasgow, to rangers... they began this match against leipzig 1—0 down after the first leg. they began with inspiration, with their captain... commentator: james tavernier! whatever expectations ibrox possessed, they were exceeded. glen kamara kept his composure, which meant that fans
10:52 pm

could lose theirs — joy. rangers lead. but with 20 minutes left to play, leipzig responded — it was all equal. rangers persevered, just like they've done throughout this competition. john lundstram's winning goal, a night to rival any, and a european final to look forward to. in frankfurt, west ham lost a defender to a red card in the 19th minute and conceded a goal soon after. that left them two behind in their europa league semifinal. there were no more goals, but after tempers frayed on the touchline, west ham's manager david moyes was sent off and his team went out. the europa conference league meant little to leicester city until they began to excel in it. now a semifinal, soon this... commentator: fabulous goal! that was tammy abraham, the englishman reborn in roma. there's one roman forever idolised in leicester. yeah, it's you, claudio ranieri. but a european final was a dream too far.
10:53 pm 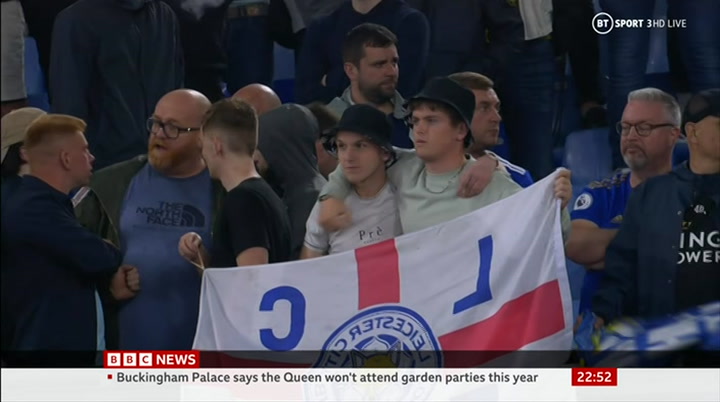 2—1 overall, leicester's run all over. joe wilson, bbc news. chris kirchner is a step closer to completing the takeover of derby county. the efl board has today been advised that a deal to take the club out of administration and under the ownership of the american businessman is nearing completion. evidence of sufficient funds has been confirmed, but a significant issue remains still about the status of the stadium and its ownership. andy murray pulled out of his match against novak djokovic in the third round of the madris masters through illness. meanwhile, british number one cameron norrie is out after he lost to spanish teenage sensation carlos alcaraz, going down 6—3 in the deciding set. the 19—year—old will face his idol countryman rafael nadal in the next round. dan evans was also knocked out. he lost in straight sets to andrey rublev. the british number two had his chances.
10:54 pm 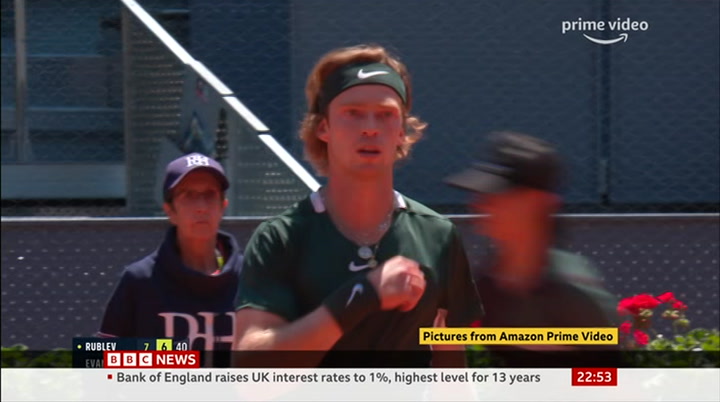 he broke rublev in the opening game of the match, and then had setpoint in the tie—break, but couldn't capitalise, losing the opening set. rublev took the second set 7—5 to win in just under two hours, 30 minutes. essex have been fined £50,000 by the england and wales cricket board after pleading guilty to two charges relating to a racist comment made at a board meeting in 2017. the club were charged over the comment itself and their failure to conduct an appropriate, orany, investigation. former chairmanjohn faragher has denied making the comment. it's day one of the british masters golf at the famous belfry course near birmingham. but there is a distinct lack of british interest at the top of the leaderboard, with the lead shared by denmark's thorbjorn olesen and australian ryan fox. they are both on 6—under par. england's women lost 4—1 to germany in monchengladbach in their final away fixture of the pro league. the result leaves england in fifth place in the table, eight points
10:55 pm 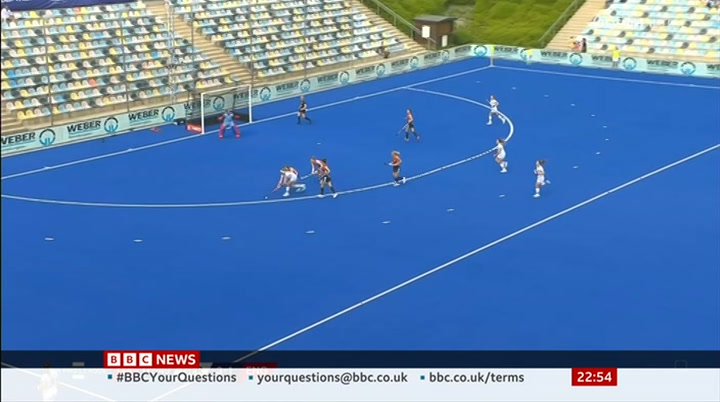 behind germany in fourth. england's men also lost to germany in the same competition 3—2, and they lie in seventh. formula 1 world champion max verstappen took time out of his preparations for this weekend's miami grand prix to throw the first pitch in the mlb game between miami marlins and phoenix diamondbacks. he didn't help miami, as they lost 8—7. and verstappen wasn't the only driver flirting with another sport. lewis hamilton, the man he beat to the f1 title last season, has been out playing golf with nfl quarterback tom brady. they were in a team together at a charity event. this weekend's race is the first of two in the states this year. it'll be at the hard rock stadium. there is a part that you're excited and then there is the nervous part. it is a new circuit.
10:56 pm 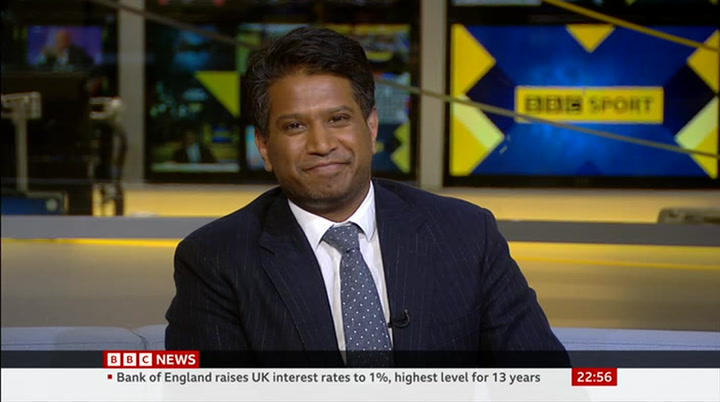 there's not a lot of time to practice, so it's exciting when you get out on a new course. you are discovering all the different features of the circuit and surroundings, and it's been a dream for our sport to be in miami. we've been here to see other sports, but our sport will hopefully earn its right to be here this week and put on a great show for everyone. reminder, rangers into theirfirst european final since 2008. and that's all the sport for now. while most places stayed dry on thursday, during friday, we're going to see some wetter weather slowly moving southwards across the uk. before you rub your hands with glee if you're in an area that's been very dry of late, the further south you are, the system will be weakening and there won't be much rain left for you by the time we get into friday night. here's the weather system, though. here it is moving southwards out of scotland and northern ireland during the day, but this
10:57 pm 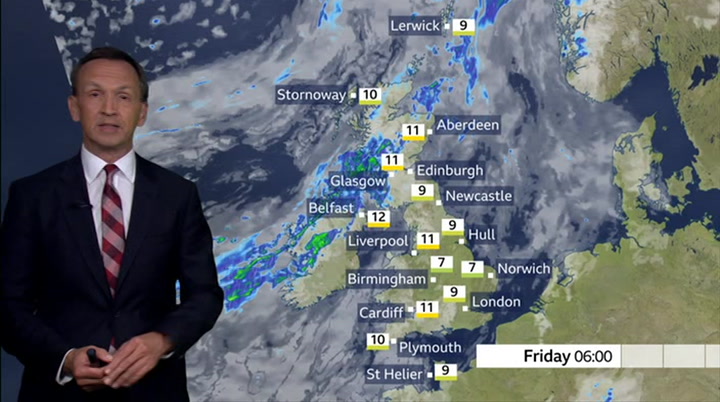 is where we will begin with the rain, a stiff breeze and a very mild start to the day. it will slowly move away from scotland, northern ireland, and with brighter skies and a few showers following on behind as the rain heads into northern england and wales. and in fact, even ahead of it, through wales and south west england, some low cloud, mistiness, some drizzle, especially around coasts and hills. much of eastern and south east england will stay dry during daylight hours with sunny spells before it gradually clouds over. this is where see the day's higher temperatures, whereas we're going to, of course, be cooler where you have the rain. but notice how it does weaken through friday evening and night. maybe something half—decent into east anglia, but for much of southern england, a splash and no more as it moves on through to leave high pressure building in behind itand a mainly dry start to the weekend. there will be some sunny spells around, but there will also be some cloud building and a few showers breaking out through central and southern scotland, northern, central, eastern and south east england during the day, though very few and far between. for many, it'll feel warm
10:58 pm 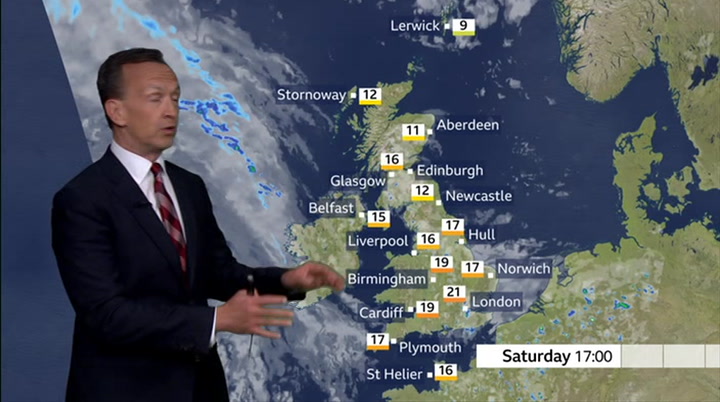 in the sunny spells, though cooler with an onshore breeze around north—eastern coasts before temperatures recover here on sunday. for part two of the weekend, high pressure keeping most places settled, but weather fronts do make some progress towards scotland and northern ireland once again. and it does mean there'll be some cloudier skies occasionally. though there's a chance of seeing a little rain on sunday, it doesn't look like anything more than that. and it will still feel pleasantly warm where you get to see those sunny spells. on monday, a greater chance of some wetter weather again in scotland and northern ireland as we see an area of low pressure pushing a more active weather front in here with a strengthening breeze. may turn a bit breezier through wales and england, too, but a lot of fine weather to come and turning warmer. it is a sign of things to come in the week ahead. now, for scotland and northern ireland, it looks to be staying quite unsettled. there'll be rain at times, and temperatures still perhaps on the warm side of average. but turning much warmer through parts of wales and england, and perhaps the warmest weather of the year so far.
10:59 pm 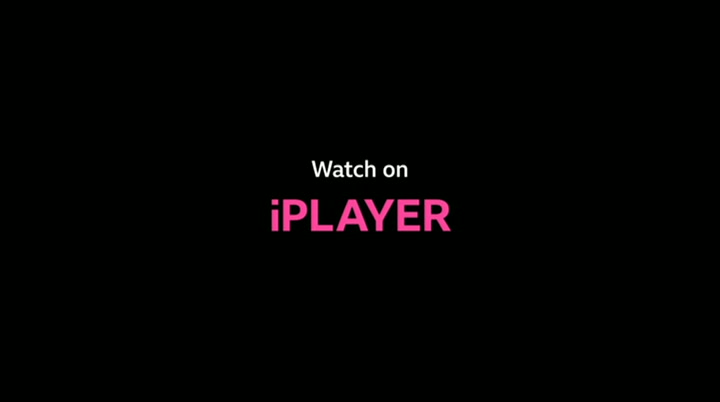 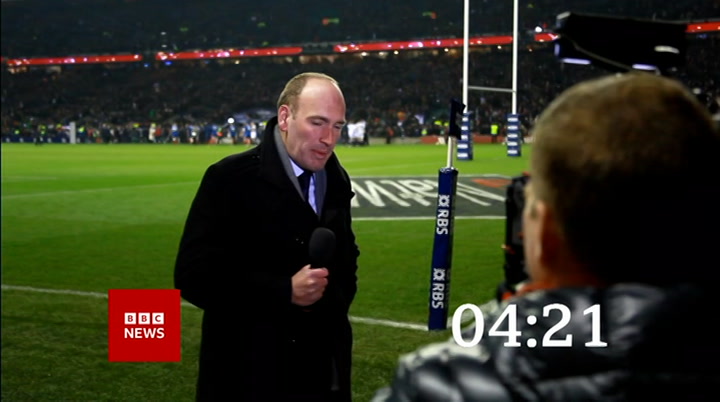 welcome to newsday, reporting live from singapore, i'm mariko oi. the headlines... russia's president putin says ukrainian fighters still holding out in mariupol�*s steel plant must surrender. it's thought 200 civilians are also trapped — in hellish conditions. millions of people across the uk have cast their votes in local elections and for the northern ireland assembly — it's seen as a test of support for prime minister borisjohnson. in the philippines, final campaigning is under—way ahead of next week's landmark presidential election. and i'm karishma vaswani reporting live from manila — polls suggest the son of late strongman ferdinand marcos —
11:01 pm