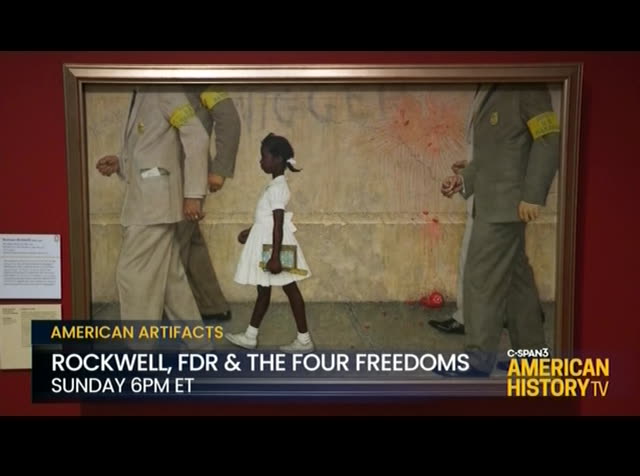 >> sunday at 5:00 p.m. eastern a discussion about shakespeare's influence on u.s. politics. at 6:00 p.m. on american artifacts the norman rockwell museum traveling exhibit on fdr in the four freedoms. explore our nations passed on american history tv, every weekend on c-span3. earlier today senate minority leader chuck schumer came to the floor to announce that the senate would exercise its option to take another vote on president trump's national emergency declaration for the southern border. under the law of the senate can boat to repeal the declaration every six months. lawmakers voted to repeal the president's declaration in march but house failed to override the president's veto of the qrepeal. >> madam president, i began this morning with news for my colleagues on both sides of the aisle. as stipulated by the national emergencies act democrats will
7:11 pm 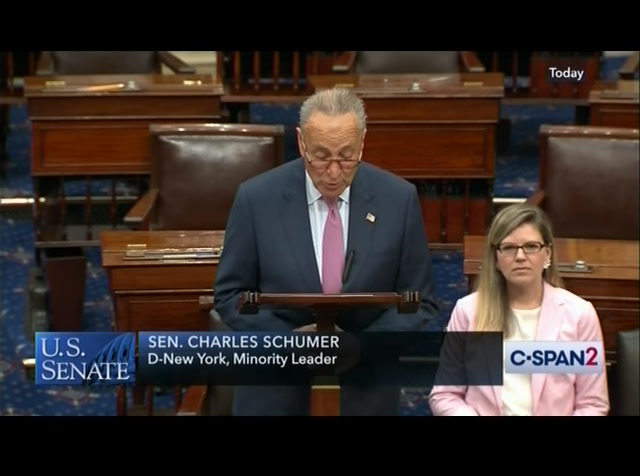 once again force a vote to terminate the president's national emergency declaration. the provisions of the national emergency act dictate that the resolution of disapproval be privileged and therefore must be voted upon. as everyone no doubt remembers, the trump administration declared national emergency in february of this year. after congress repeatedly denied the president funding for the construction of a border wall that he promised mexico would play for. a few weeks ago the administration released the list of military construction projects, it's planned on canceling in order to steal money for the presidents wall. national dent's emergency declaration was and is an outrageous power grab by a president who refuses to respect the constitutional separation of powers. i say to all my colleagues, this issue rises to a large and
7:12 pm 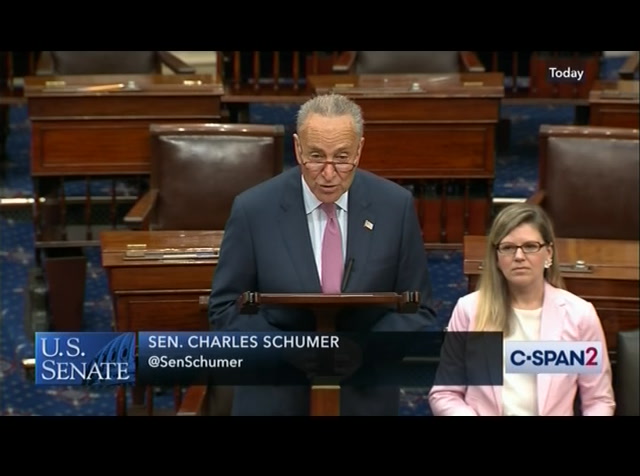 vital constitutional issue. does our country truly have checks and balances end particularly when we have such an overreaching president. we all must consider the dangerous precedent this would set if presidents made it clear national emergencies every time their initiatives fail in congress. it's outrageous. the balance of powers, the president failed in congress, he didn't say was emergency then. but he used it a national emergency which is intended for true national emergencies, floods, states of war. then overrules the will of the people as voiced in the congress. this is so wrong. the president has clearly attempted to use syrup the power of the purse given exclusively to congress by the constitution. by taking funding from projects we've approved and giving it to
7:13 pm 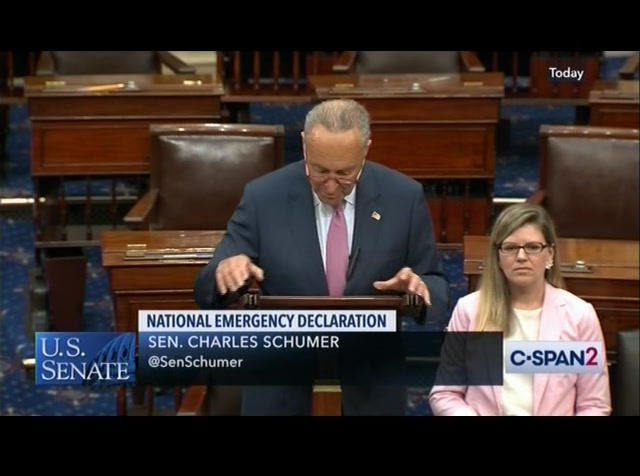 projects we repeatedly declined to approve. this goes to our democracy. this goes to how the founding fathers set up the delicate balance. we've never had such a president overreach on emergency basis. the recourse for such a brave and power grab should be an overwhelming bipartisan vote in the congress to determine the emergency declaration and reassert our constitutional authority. most of my colleagues know this is wrong. in fact, when we had a vote last time 59 senators including a good number of republicans voted against the emergencies. and you know what adds insult to injury? who was the president stealing the money from? military, projects that protect our nation support military
7:14 pm 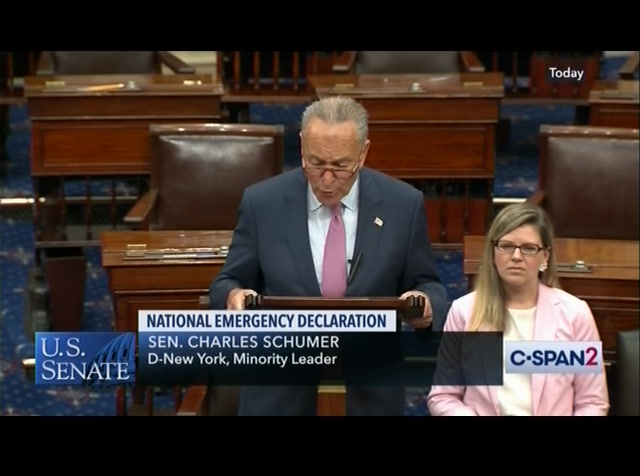 families, local economy, local schools. the trump administration has caused filtering funds in 23 states.three u.s. territories and military installations in 20 countries, including $80 million from projects in north carolina. 30 million in arizona.even a middle school in kentucky. how do we say the men and women who risk their lives for us and whose family sacrifice that we are taking their money away that the president is taking the money away and we will shrug our shoulders. not this member. not for senator. not i believe every senator on our side. not a whole bunch on their side on the republican side. we need some more people to join us. i hope we will see even a large majority stand up for both the constitution, and the military
7:15 pm 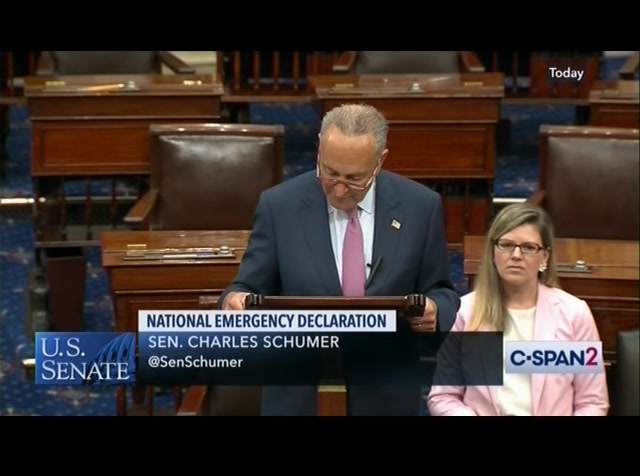 and its military members and families. democrats and republicans alike should vote to terminate the president's national emergency declaration and you can be sure we will make sure that everyone will have a chance to do so within the next month. if we don't do it, how many more emergencies where the president declared? who else will he take money from. and use uit. for purposes that he wants but that congress does into the american people are largely opposed to. on another matter, we have until the end of the month for members of both parties to work together and formed the federal government. one of the most basic responsibilities as legislators. at the end of july both parties came together to produce a budget deal that set the blueprint for negotiations this fall. the same spirit of bipartisanship is required now to move forward through the t
7:16 pm 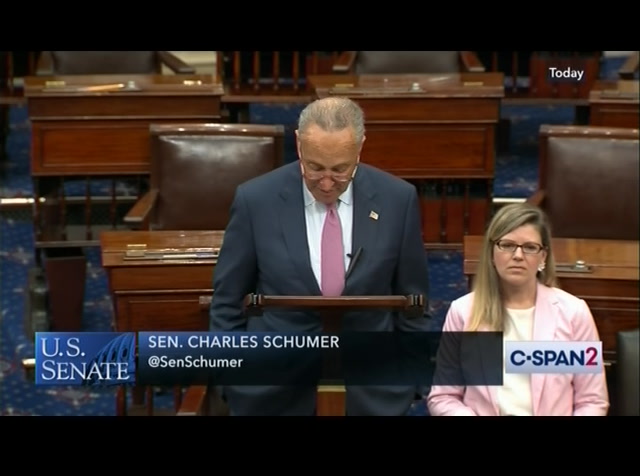 appropriations process. it starts with good faith discussions on how we allocate funding to the 12 subcommittees. to be successful that process must be fair, cooperative, and bipartisan. under a partisan process we know what happens, we all lived through it, just nine months ago. the president demanded funding for a border wall and then shut down the government when congress didn't given to him. now nine months later i read were ports that republicans are considering going down the same path again, potentially risking another government shutdown over the exact same issue. everyone on both sides of the aisle. both sides want to avoid a shutdown. certainly the republicans learn their lesson was very good for them last time. both sides want to avoid a shutdown. in both sides would prefer to have a real budget not a cr.
7:17 pm 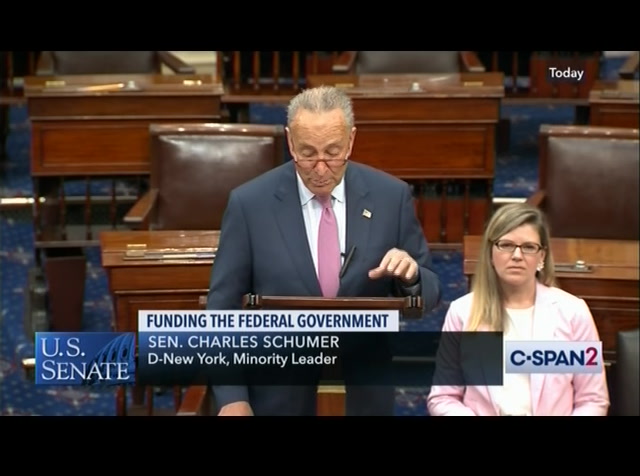 for both parties to work together and keep the appropriations process bipartisan, not for the republicans to tell the democrats, these are the 302 d's and this is the order which we will do the bill. that's not bipartisan and that's not what the bipartisan agreement called for. i'm leon guns, over the august recess leader mcconnell promise we would hold a debate on gun violence when we returned to washington. now that we are back, democrats will insist on holding leader mcconnell to his promise. a debate on gun safety should be our first order of business. the place to start a debate is a vote on the house passed bipartisan background checks will. it's the foundation on which most other gun safety laws depend. we can't make a real dent in preventing gun violence without first patching the glaring
7:18 pm 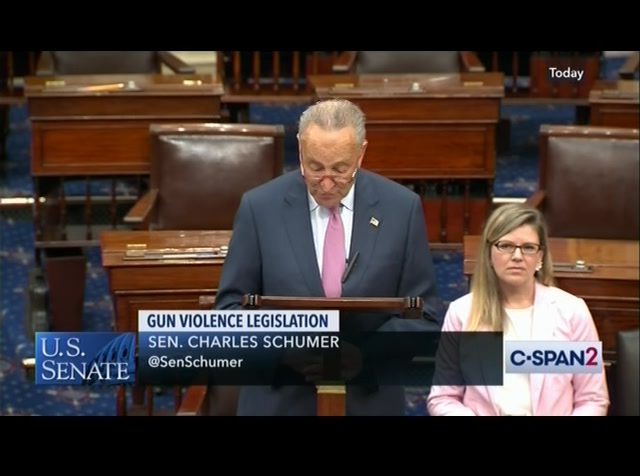 loopholes that our laws allow criminals, spousal abusers, the adjudicated mentally ill to buy firearms without a background check. some are talking about the so-called herb or red flag. the red flag doesn't work if there is no background checks. mr. jones is red flagged. then he goes online or goes to gun without a background check. the red flag doesn't work unless we tighten the loopholes. close the loopholes from the background check law. him later today republican leaders will meet with president trump to talk about the congressional agenda this fall. gun violence, according to the reports i read, is expected to be a topic of the conversation. i strongly urge my republican colleagues to prevail on the president to support universal background checks.
7:19 pm 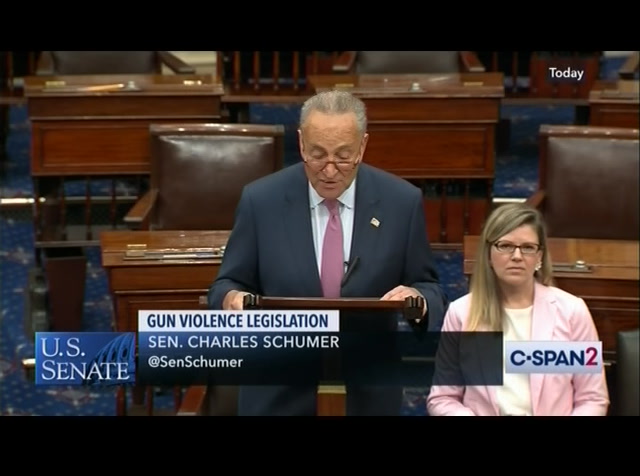 leader mcconnell has said he will bring a bill to the floor if it has the president support. that means there is a truly historic opportunity for president trump to lead his party toward sensible gun safety laws that in the past republicans have refused to support for decades. public support, public pressure is mounting from one end of the country to another. 93 percent of americans support background checks. the vast majority of republicans, vast majority of gun heowners, support it.the president can provide republicans important political cover. they shouldn't need it because so many americans are for this but they do because of the power sometimes exercise rather ruthlessly by the nra. so the president can do it. this is a moment of truth. the president, leader mcconnell, and all of my
7:20 pm 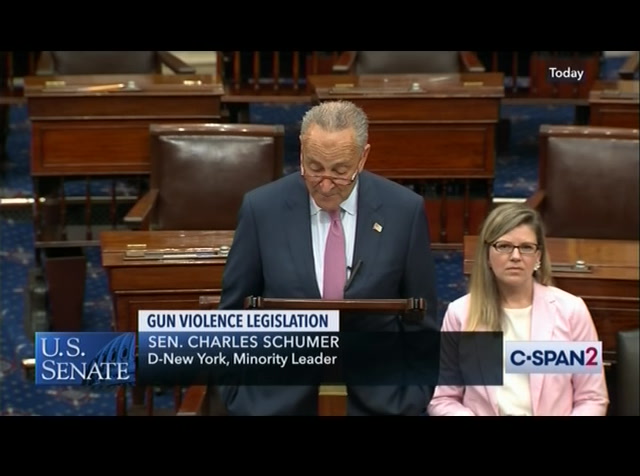 republican colleagues the american people have spent up too many people are being killed across the country every day. just yesterday waiting at the airport a man came over and grabbed my arm and said to me that his nephew was a victim of gun violence and pleaded with me for action. it's affecting more and more people. their families, their friends, their communities. i imagine every one of my colleagues has met someone like this man, i don't know his name, over the past month. the mayor of dayton ohio, man whaley, joined democrats history of the press conference. another, incredibly compelling voice pushing for some progress on this issue. we invited her to speak at our caucus lunch today and i expect my republican colleagues have mayors in their states just like her are exhausted. by the daily gun violence in their cities. republicans have a chance today to convince the president to do
7:21 pm 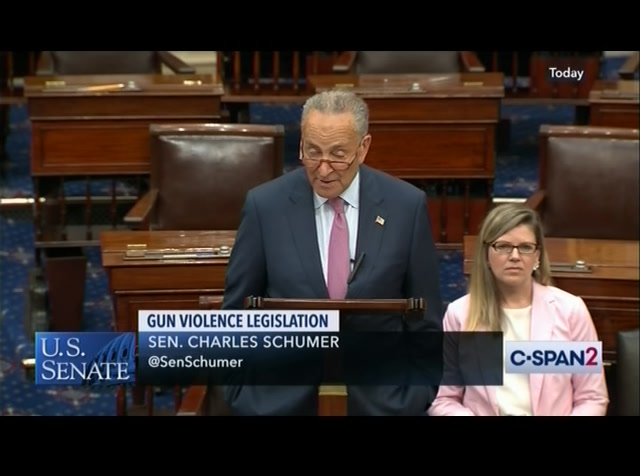 the right thing and come out and support the policy that is not a fig leaf, that is not milquetoast and will do nothing but one that will actually save lives. i strongly urge our republican colleagues, leader mcconnell, to use this afternoon's meeting at the white house to discuss supporting the bipartisan background checks bill. yielded the floor and note the absence of quorum. >> the house will be in order. >> for 40 years c-span has been providing america unfiltered coverage of congress, the white house, the supreme court and public policy events from washington dc and around the country.you can make up your own mind. created by cable in 1979, c-span is brought to you by your local cable or satellite provider. c-span, your unfiltered view of government.
7:22 pm 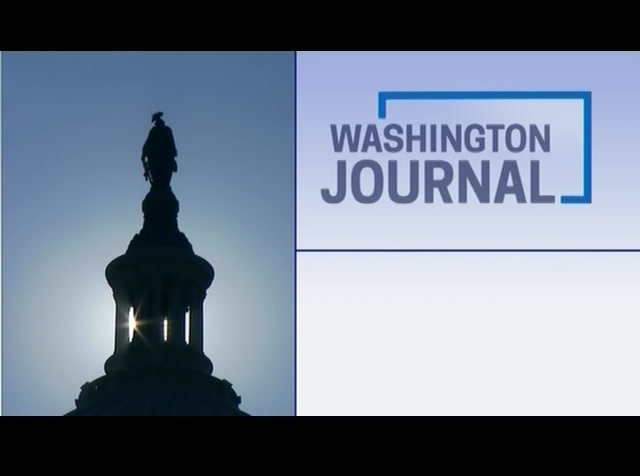 Senate Minority Leader Chuck Schumer used his leadership time to announce that the Senate would exercise it's option to take another vote on President Trump's National Emergency Declaration for the Southern Border. Under the law, the Senate can vote to repeal the declaration every 6 months; lawmakers voted to repeal the President's Declaration in March, but the House failed to override the President's veto of the repeal.