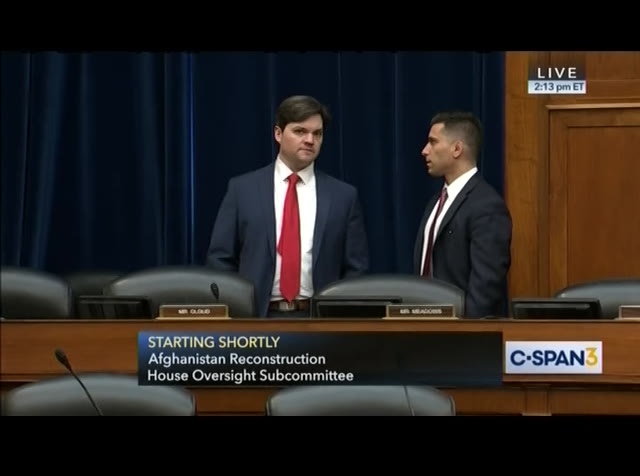 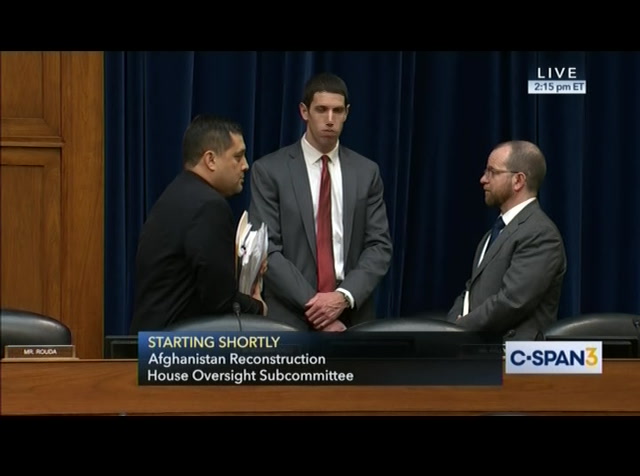 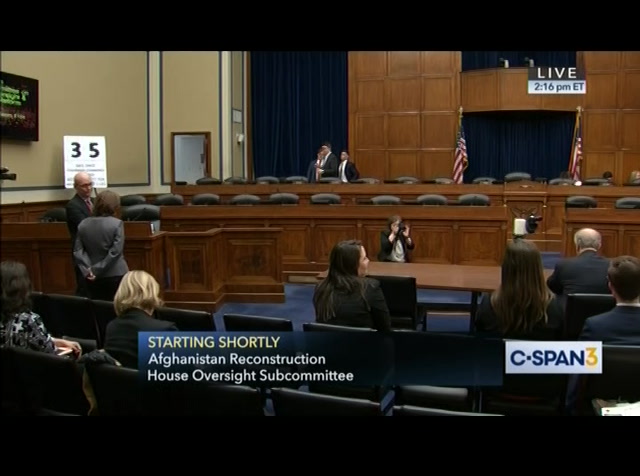 once again, we're standing by for this hearing to get underway. testifying about reconstruction efforts there. we'll have live coverage as soon as the hearing begins. right now we think maybe one more vote. as those wrap up, members will make their way to the hearing room and we'll get started.
2:17 pm 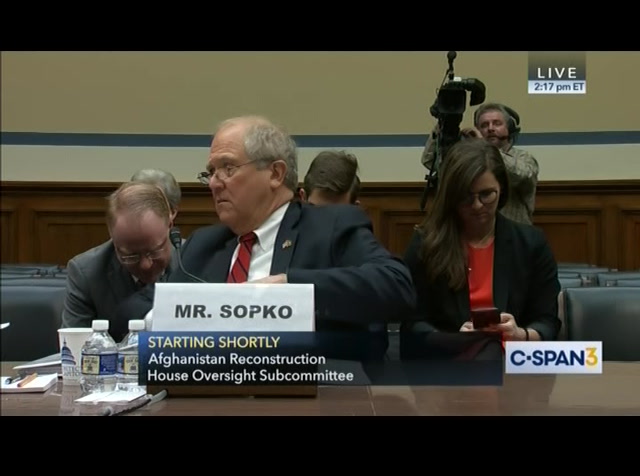 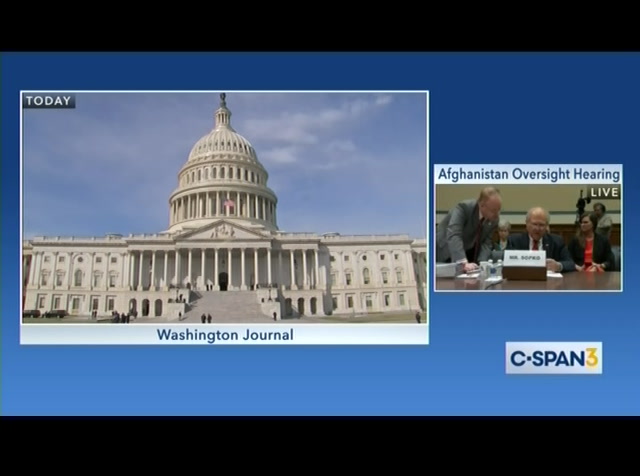 as we wait for this event to get started, let's show you a portion of this morning's washington journal. >> two hours from now the secretary general will address the joint immediate meting of congress and for about the next 40 minutes wohl talk about the history and future of nato with the former u.s. ambassador to nato from 2009 to 2013. joins us from chicago. first, 70 years later in a world where the threats have changed, what's the case for nato today? >> in some ways, it's exactly the same case it was in 1948
2:19 pm 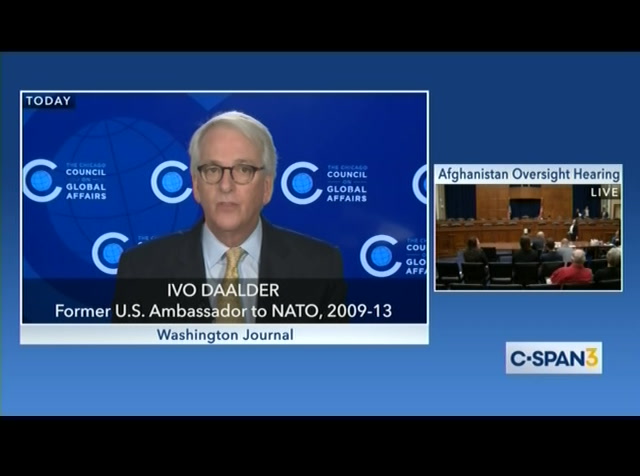 when we first started talking about nato. >> a fundamental belief in the united states and among europeans that the best way to prevent war in the european continent, a continent that had for decades, indeed centuries seen war and conflict that the best way to avoid conflict is for the united states to be engaged in europe. both in security and economic affairs and to encourage european countries to work together to resolve differences through dialogue and diplomacy rather than the force of arms. and it's been the most successful alliance in history is and it has prevented the return of war in a continent that has seen its fair share of it. >> is it more defend iing
2:20 pm 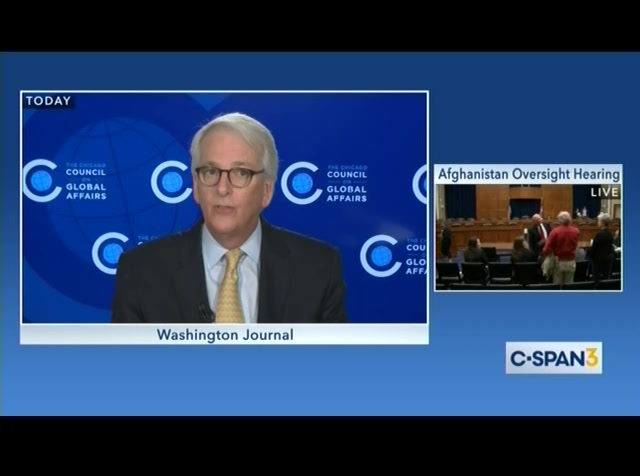 territory or the interests of its member countries wherever those interests are threatened. >> in some fundamental way, it's about defensive territory. article v of the nato treaty, it says an armed attack against one will be seen as an armed attack against all is a use of force against ally. that use of force can be different. it doesn't have beto be tanks rolling over the border. it can be as it was on september 11th, 2001, airplanes being flown into buildings. indeed it was on september 12th that nato for its first and only time invoked article v for defending the united states. but it is linked to an armed attack when it comes to the question of collective security. that said, the 29 and soon 30 countries that make up nato
2:21 pm 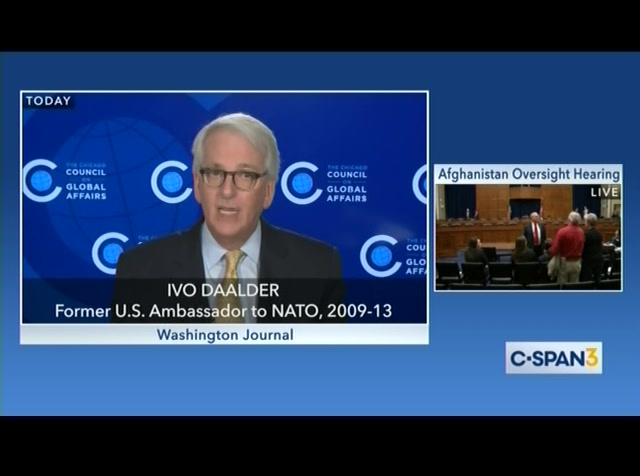 today together represent the largest military, largest democratic and largest economic block in the world. and as a result, it's a weight of that capacity that exists among the nato allies that will allow it to have a say in what happens around the world and to defend the interests of all of its members by providing for peace and security in the north atlantic area and perhaps also in other areas. indeed, nato has been involved in afghanistan since 2003. the mission in afghanistan today is a nato mission. to which the u.s. contributes about half the troops and europeans and other allies contribute the other half. so over time nato's interests have expanded beyond the immediate territory of the alliance to concern itself with the security and stability of the periphery and beyond the
2:22 pm 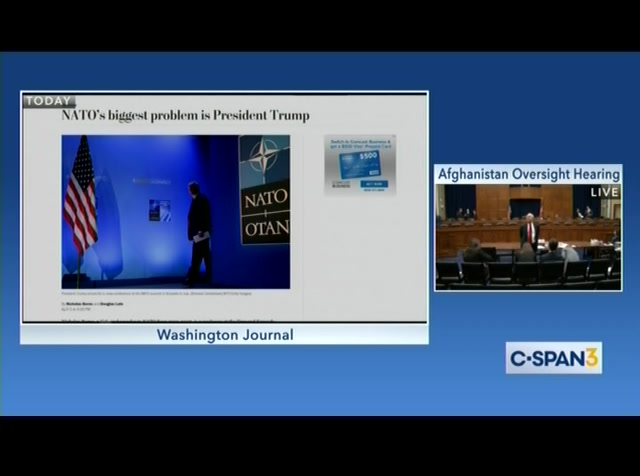 periphery of the north atlantic area. >> a former u.s. ambassador to nato from 2009 to 2013. we're talking about nato for about the next 30 minutes this morning on "the washington journal" if you want to join the conversation. the phone lines are open. folks are calling in would like to point viewers to this headline from today's "washington post." it's from the op-ed pages. nato's biggest problem is trump. it's a column written by two former u.s. ambassadors from before your time and after your time. nicholas burns and douglas lute in their op-ed today write that nato is is still the strongest military aloins, but the greatest danger is the absence of a strong principled leadership for the first time in history. what do you make of that assessment. >> i share the assess isment of
2:23 pm 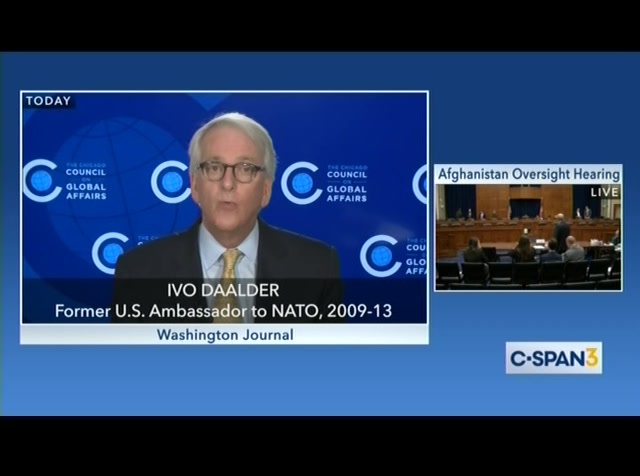 the problems that we're facing. we are in a you anemunique situ. we have an alliance that's responded strongly and very capably against the reemergence of a threat from the east, in particular in the aftermath of the russian invasion of ukraine. nato has stood up and put its forces into the eastern europe, has bolstered its presence in the baltic countries across the air space of the baltic countries. the u.s. deployed new troops into norway. which hasn't been there since the end of the cold war. and has increased spending on the defense. that's one positive element and the the united states under the trump administration contributed to those efforts. but we are seeing something that
2:24 pm 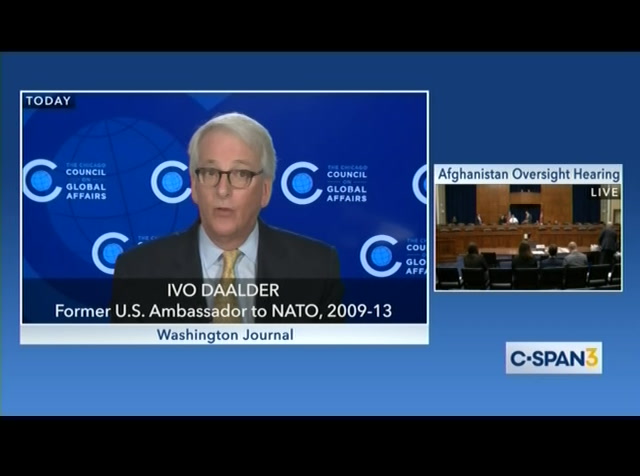 is quite new and unique. who doesn't lock as an essential part of the national security strategy. and that's a change from the 13 presidents who came before him since truman was president and sign signed the north atlantic treaty. every president has seen nato as a cornerstone of america's engagement in the the world. that we have strong allies. i want to help nato to achieve
2:25 pm

objectives. whether it was in terms of defense, whether it was in terms of arms control or in terms of diplomacy and dialogue with other countries around the world. that would not only serve american interests but make the the better and safer place. donald trump has not seen nato in that fashion. he has looked at it as a coalition of states where the only measure that matters is who spends what on defense. and if countries do not spend enough on defense, they are not worth being allies. there's no interest beyond what we spend on defense. he has called nato obsolete. he did so during the call pain and even after he was elected. he refused for many months to endorse article v, the fundamental collective defense provision ask called into question whether the united states should remain a member of nato. so in that sense, my former
2:26 pm 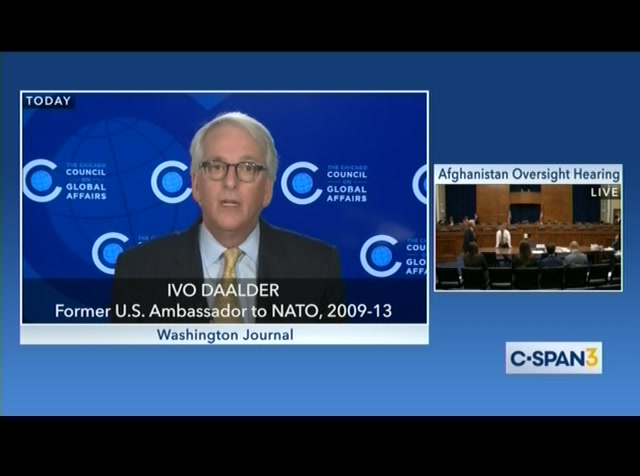 colleagues as he was ambassador to nato are right to point out that we are entering a new era. now i should add this is only -- >> we hear at the chicago council and global affairs. >> if you want to join the conversation the phone lines are own. it's the secretary general of nato who will be addressing a joint meeting of congress at
2:27 pm 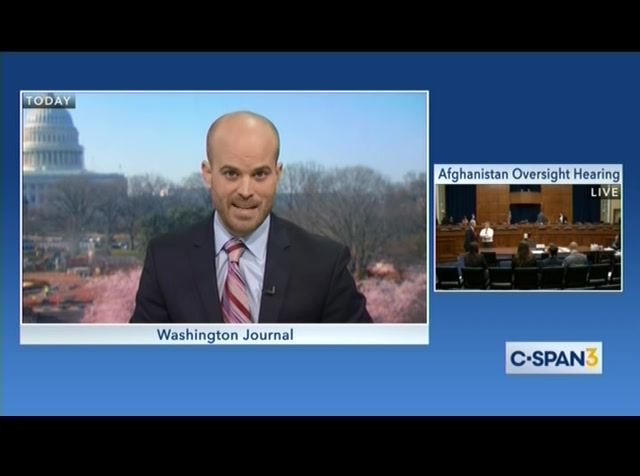 11:00 today. you can watch it here on c-span. they met with president trump yesterday in the oval office and president trump talked about the issue of nato member defense spending and how the relationship is with nato under his administration. >> we have seven of the 28 countries are currently current and the rest are trying to catch up. they will catch up. and some of them have no problems. but we're looking at the gdp level and at some point it's going to have to go higher than that. it should be higher. we're a level of 7 out of the 28. the united states pays for a big share of nato. but the relationship with nato has been very good. the relationship with the secretary general has been outstanding. and i think tremendous progress has been made.
2:28 pm 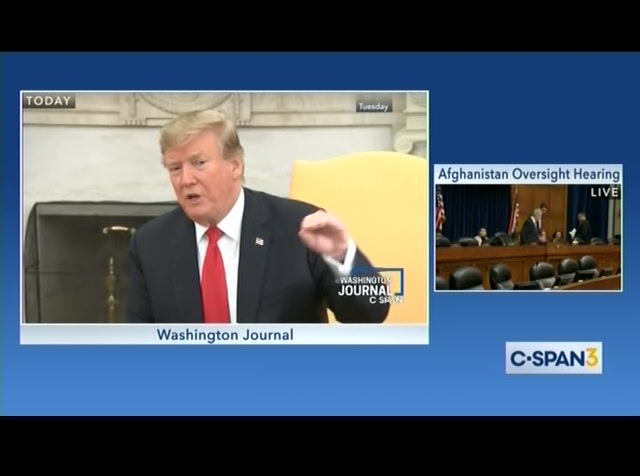 you showed me this originally yourself. it you look the at the charts and the different things, you go back 10 and 15 years and it's a roller coaster ride down in terms of payment. and since i came to office let's say rocketship up, picked up over $140 billion of additional money and lock like we're going to have at least another $100 billion more in spending by the 28 nations. that's exclusive of the united states. we'll have another $100 billion more by 2020 or into 2020. so tremendous progress has been made. and nato is much stronger because of that progress. and mr. secretary general, it's a great honor to have you with us at the white house. thank you. >> joining us on "the washington journal" this morning is is the former u.s. ambassador to nato, the coauthor of the book "the empty tloen." here to take your calls and
2:29 pm 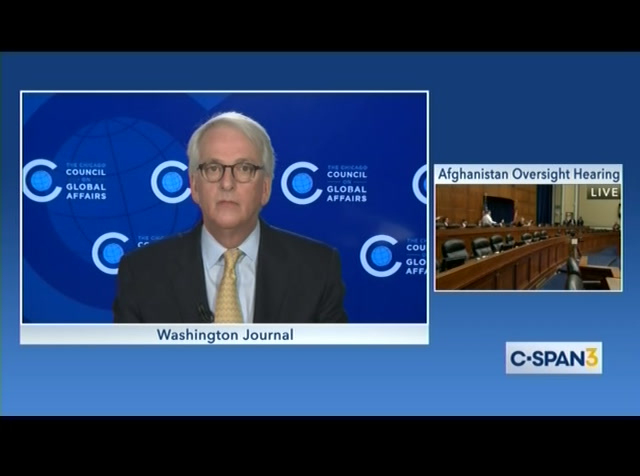 questions about nato as we come up on its 70th anniversary. ed has been waiting to chat with you from pennsylvania. ed, you're up first. >> yes, good morning. us appreciate the author's point of view and the inspector general's comments. i happen to agree with him. we seem to be is the largest in the world. even if there are deficits and all the rest. because unfortunate ly we have been known for the peace keeper. i think it's going to be a major reshuffling. that may not make america great again. that's all i have to say. >> we agree i think the united states played an extraordinary
2:30 pm 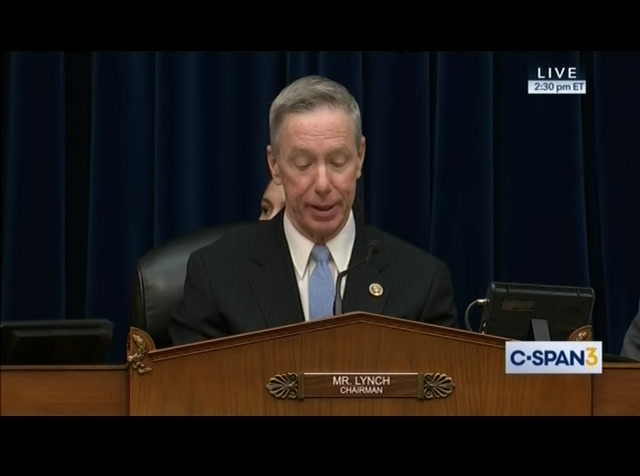 role in maintaining global peace and security for the past seven years. it was after world war ii that the united states decided it needed to be engaged in the world to prevent the recurrence of the devastation and economic depression that we saw in the first half of the 20th century. and i would add to that that wisely the united states deci decided -- this is the first hearing of the subcommittee of the national security to examine the special inspector general for afghan reconstruction high risk list of major construction programs in east afghanistan. that are at risk for waste, fraud and abuse. i will now recognize myself to give an opening statement. good afternoon, everyone. i want to welce
left
right
disc Borrow a DVD of this show DVD
tv