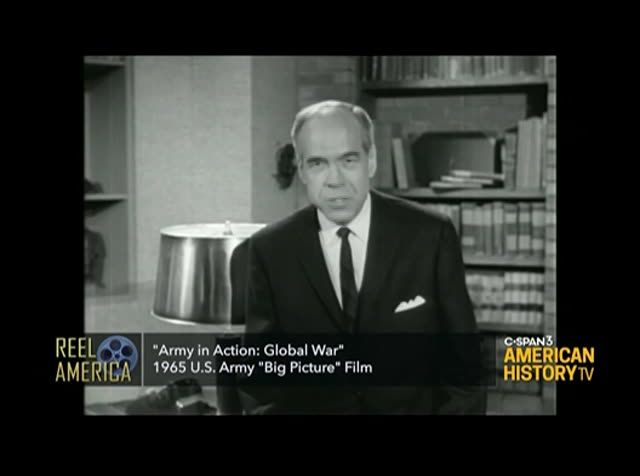 time invited the aggressor to launch his grandiose design for conquest. today, the world has shrunk in travel time and the atlantic and pacific oceans are no more than large lakes. our coastlines and inland cities are vulnerable to attack. we are a member of a family of freedom loving nations. if that family is not to be annihilated, we have the responsibility of maintaining the moral resolve and military strength to protect ourselves and those others with whom we have the common goal of the preservation of liberty and freedom. with the coming of spring, 1944, the winter
6:29 pm 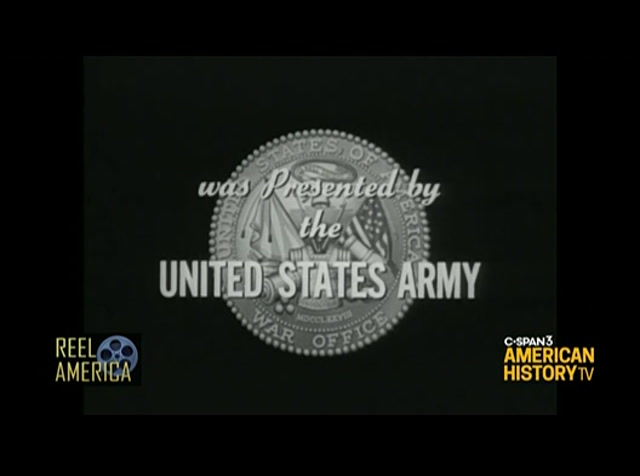 with the coming of spring, 1944, the winter stalemate in italy was broken. our forces resumed fighting their way up the west coast of the italian boot towards rome. against bitter german opposition. the british advanced up the east coast, in face of equally bitter opposition.
6:30 pm 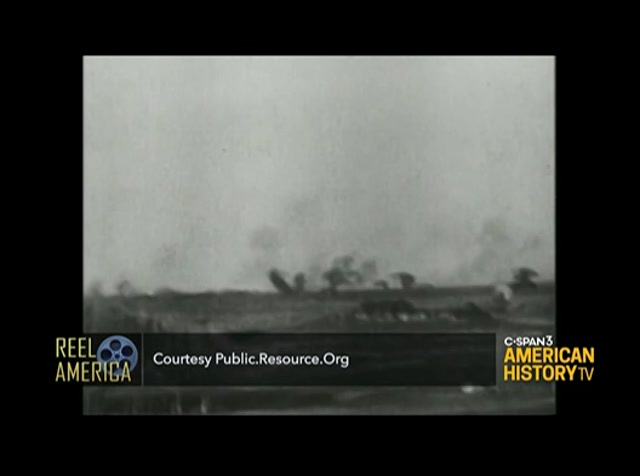 in the pacific, troops of the first cavalry division, land on the islands in the admiralty group. to wipe out all japanese resistance, and to take hold of the entire group of violence. we landed in large forces at homeland here, on the north coast of new guinea. general stillwell and his troops, were fighting the japanese in burma.
6:31 pm 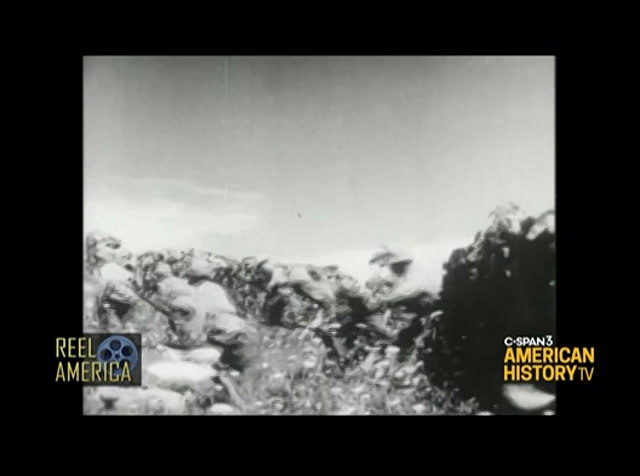 this was global warfare, on a scale never known before. less than three years before, hitler had addressed the nation. >> germany will face war on the united states to a positive conclusion.
6:32 pm 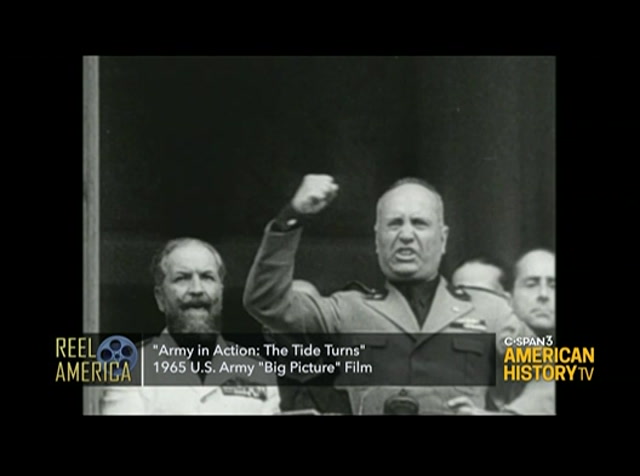 -- >> a japanese militarist, joins the chorus. >> americans have radios, automobiles, big beefsteaks, when a people have those things, they don't want to fight. americans won't sleep in hammocks, or lie in trenches. they are like a tiger who stomach is full. they are sleepy. >> the american is no soldier. the american, no soldier? and yet there he was, carrying
6:33 pm 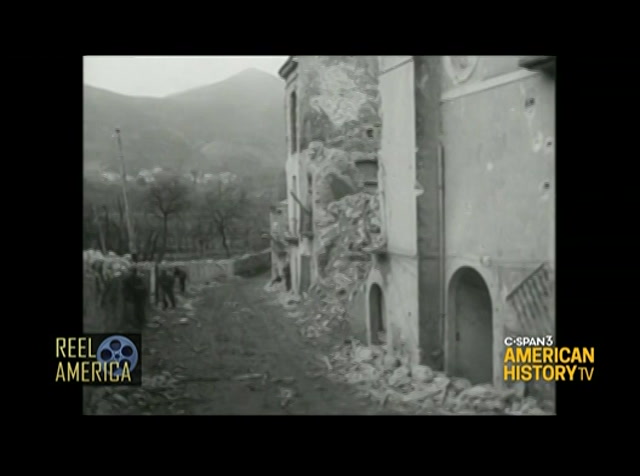 the fight to the aggressors. the self acclaimed superman, was coming to his bitter surprise and sorrow, the fighting quality of the american soldiers. it seems the aggressors had made a slight miscalculation. ♪ ♪ >> in italy, our forces
6:34 pm 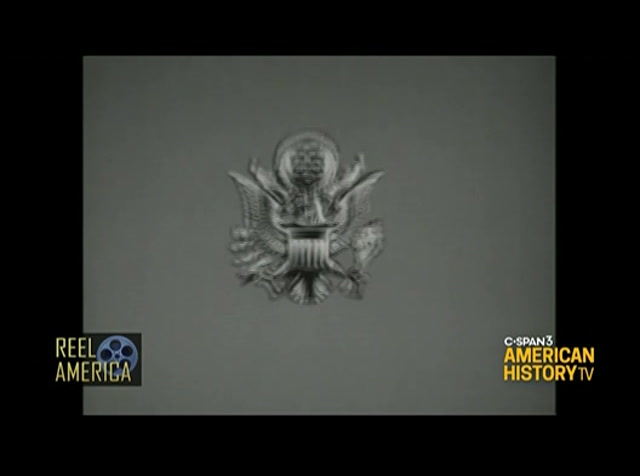 pushed on through rain and mud. over mountains, across rivers. our power drive, the --
6:35 pm 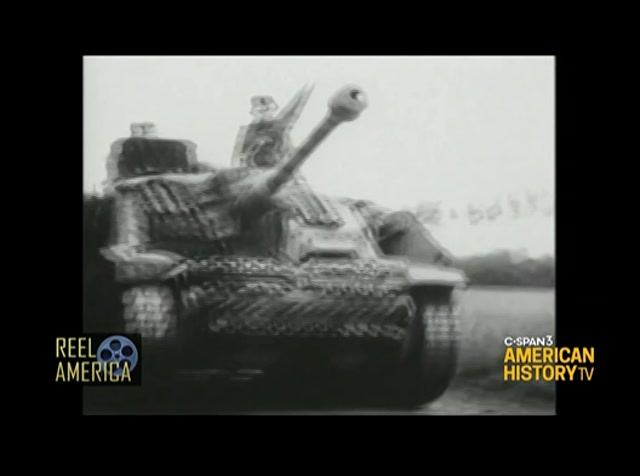 italians who forced the italians from france and the low country. our invasion of france, was soon to come. we now have an army numbering millions of soldiers. we now had 150,000 armored vehicles, as compared to the 29 tanks the army had 1940. 400,000 artillery pieces, were now engaged in the war effort, compared to the 235, available in 1940. from a 1940 production capacity of 117 aircraft a month, we were now producing 9000 planes of all types all month.
6:36 pm 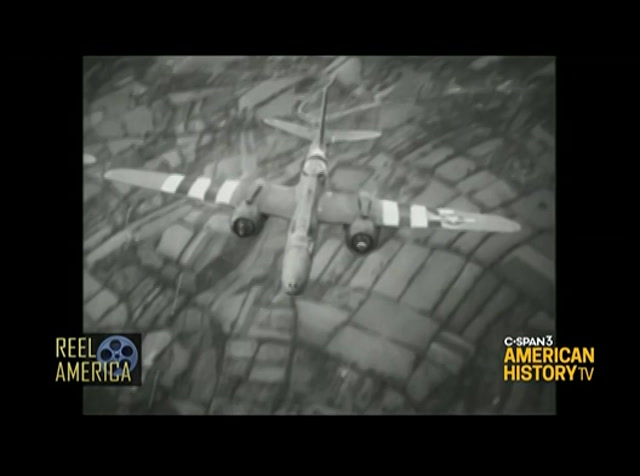 a plane every five minutes, 12 an hour. here now was an air armed 150,000 planes, to wipe out enemy industry and supply routes and communications. the american tiger, grown sleepy on a full stomach, was now fully awake, lean and fighting in the jungles. on the 4th of june, 1944, our
6:37 pm 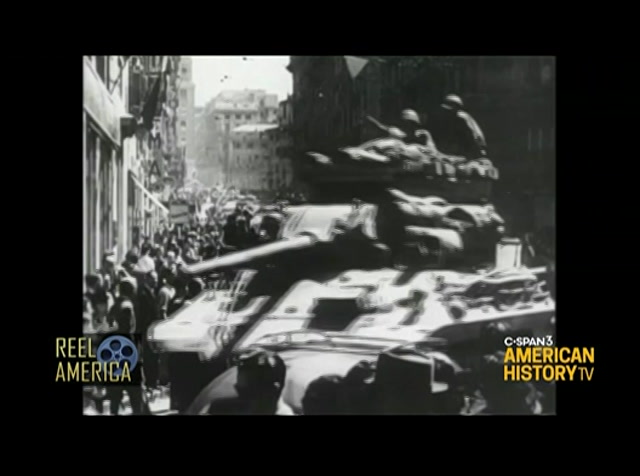 fifth army captured rome. it was a military victory yes, but a psychological effect, carried a greater impact throughout the world. for it was the first axis capital to fall into our hands. bringing consternation and foreboding to our enemy. and rejoice to the free world, and its fighting forces. in england, after months of planning and preparation, it was d-day minus two. general eisenhower, was about to put together the most a massive invasion in history. england had become a staging area for troops and material of
6:38 pm 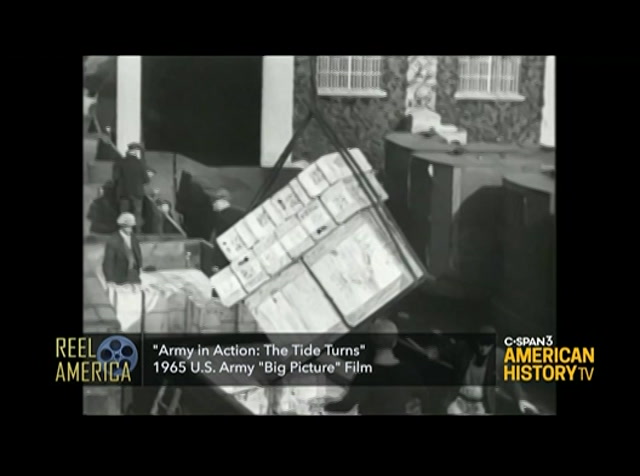 war. thousands of vehicles, ready to be assembled combat aircraft, 20,000 railroad cars and locomotives. 20 million square feet of covered storage and shop space. 44 million square feet of open storage space, for tires, bombs, shells and other explosive devices. awaiting invasion and embarkation, were support vehicles. row on row of tanks, and a wide range of artillery weapons. 170 miles of new railroad had
6:39 pm 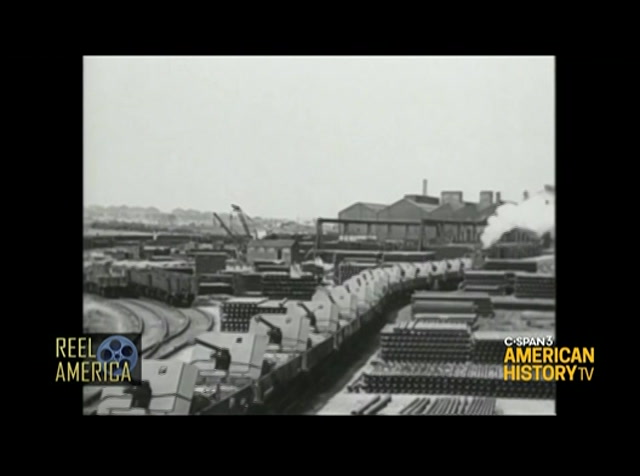 been constructed to haul 2 million tons of combat hardware to invasion ports. the united states army, had constructed 163 airfields in england, for the allied planes that were bombing germany day and night. the invasion directed by the combined chief of staff, was
6:40 pm 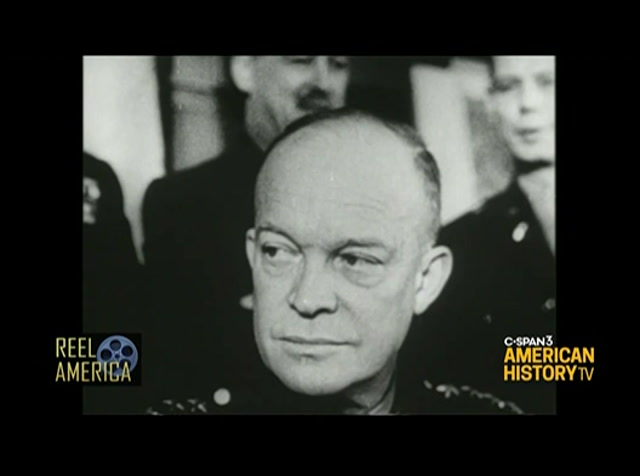 concise, general eisenhower had his orders. >> you will enter the continent of europe, and in conjunction with the other allied nations, undertake operations, aimed at the heart of germany, and the destruction of her armed forces. >> another american general was to have a central role and complying. gentle omar and bradley. commander of american forces. . d-day minus one. invasion forces began embarking, destination normandy. involved in this massive amphibious invasion were some 3 million soldiers, sailors an aircraft. 4000 ships. 20,000 vehicles of all types and an endless list of combat
6:41 pm 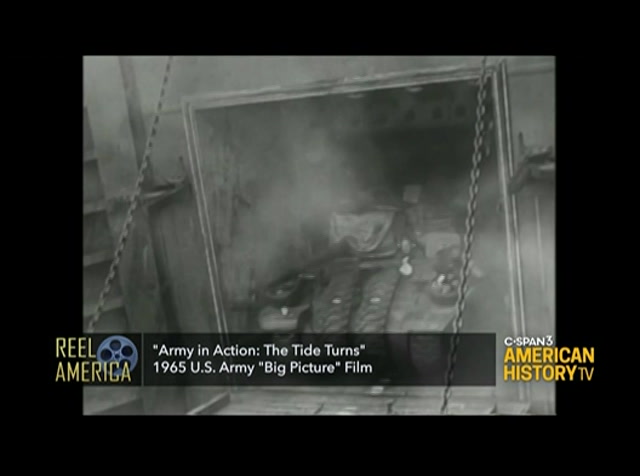 support weapons. operation overlord, the code name, was at hand. now as d-day approached, the final logistical operations were underway. in the darkness before dawn on june 6th, 1944, the great invasion began to unfold. 17,000 men of the 82nd and
6:42 pm 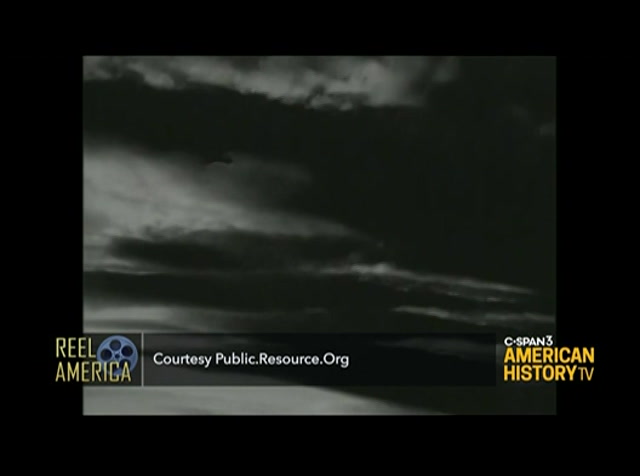 101st airborne division, with over 2 million pounds of combat equipment and supplies, where airlifted to select a drop zones behind the invasion, where they would drop to secure key road functions and other terrain objectives. the invasion armada, the largest ever symbol was now in position off the coast. while our assault forces prepared for the hour, naval power began their concentrated shore bump ardent.
6:43 pm 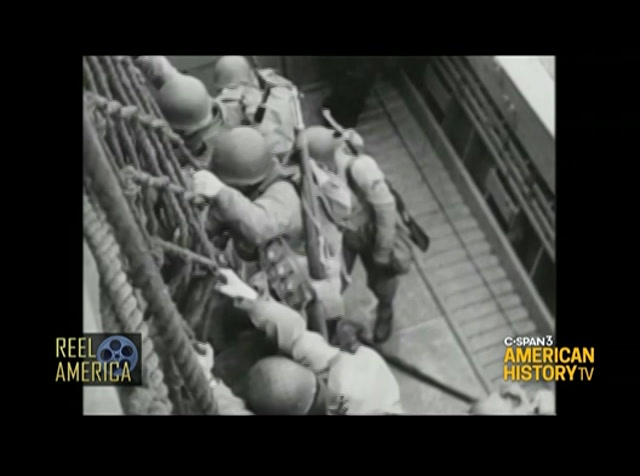 this was amphibious warfare that staggers the imagination. nothing like it had ever been done.
6:44 pm 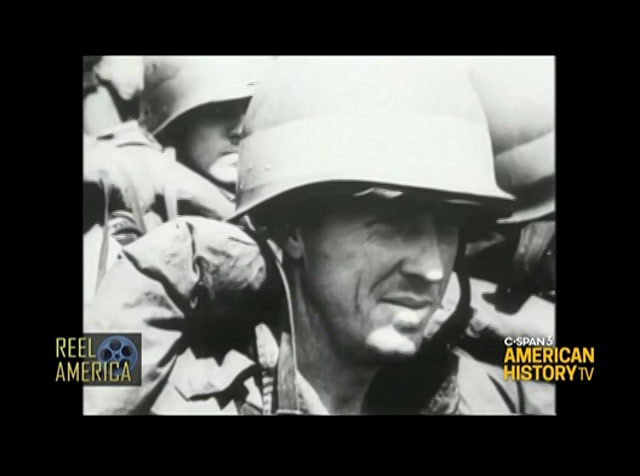 at omaha beach, 30,000 american troops stormed ashore. british and canadian forces struck in three different beach sectors. at utah beach, 20,000 american troops landed. by the end of the first day, our own invasion forced ashore totaled 120,000 men. with every passing hour, with each passing day, reinforcements streamed ashore to enlarge a beach head with tanks, trucks ammunition and supplies.
6:45 pm 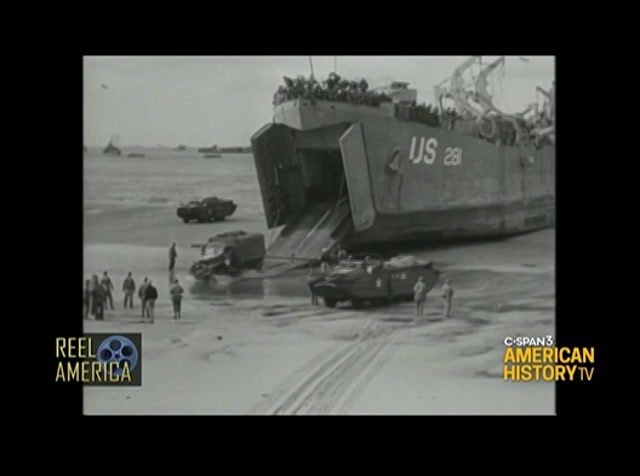 hundreds of our attack bombers and fighters were now all over europe carrying pay loads of destruction aimed at the vital
6:46 pm 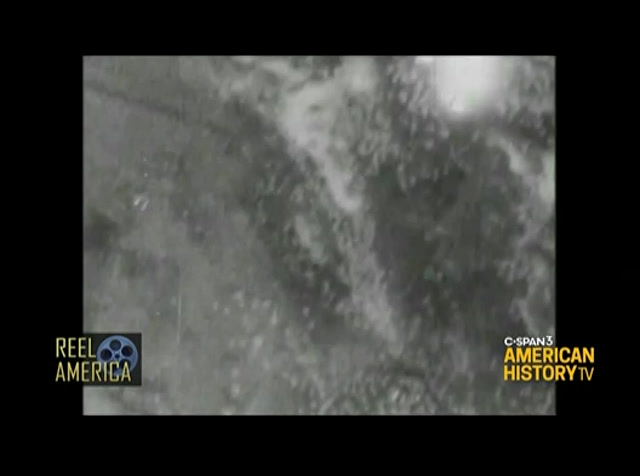 centers of hitler's fortress europe. flying fortresses in heavy formations sent 3500 tons of explosives, a ton every second on the tightly held position. our mass bomber formations were now given a canopy of protective air support by 38 lightning. together, they fought off enemy air attacks.
6:47 pm 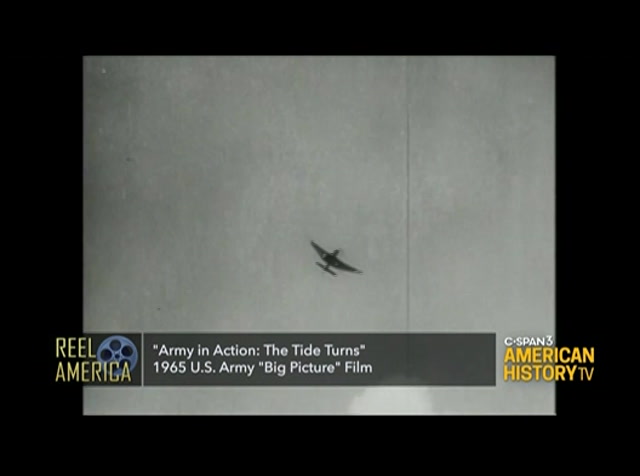 as the roar of engines and compression of palms will still ringing in the ear of the battered enemy, our ground on artillery opened up. our tanks and in the tree road forward on the peninsula.
6:48 pm 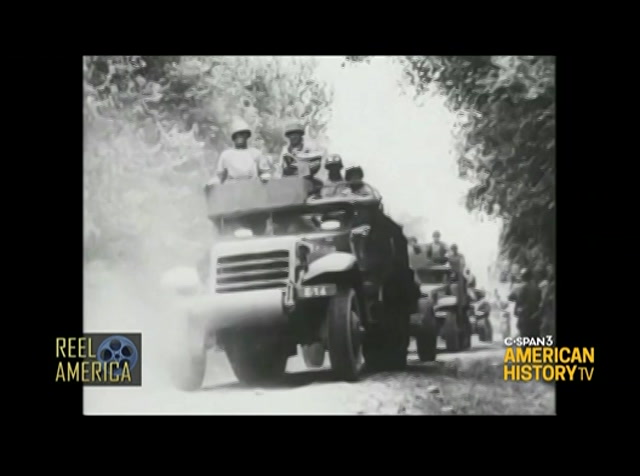 other elements pushed south. and east toward paris. what was left of ten german divisions was knocked up by the very men were told they were not soldiers and would not fight. again, the aggressor has made a slight miscalculation.
6:49 pm 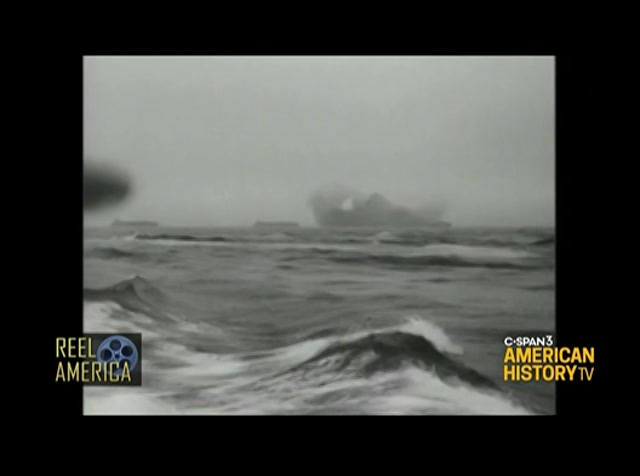 as the germans were meeting their enemies in northwestern france, the united states combat carter veterans in italy. they hit the beaches in southern france on the morning of august 15th. during that day, 50,000 men and their equipment were landed. the american sixth army corps pushed north along the rome river valley. other troops moved eastward toward the italian border.
6:50 pm 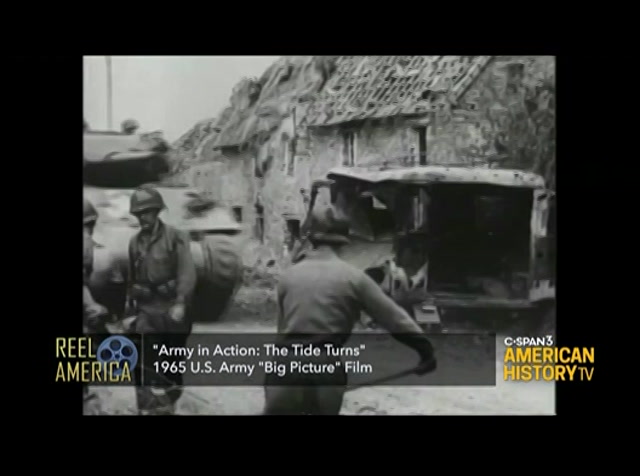 the drive into the heart of france happened now. patton's third army angled points just east and south of paris. the first army flanking the third. the seventh now is moving up swiftly from the south. ten days after the landings in southern france, paris was liberated after four years of nazi occupation.
6:51 pm 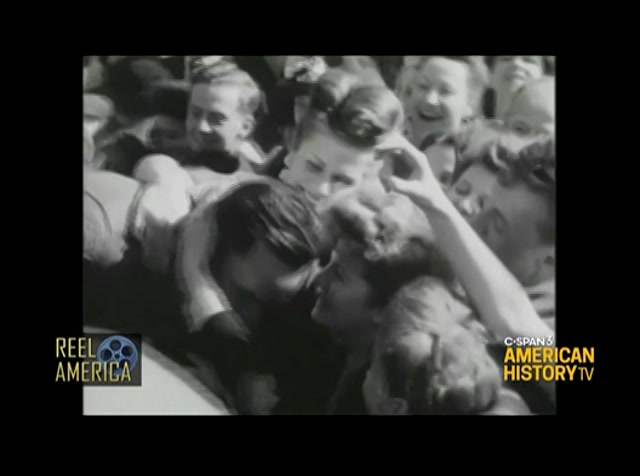 deliberation of paris, like deliberation of rome, less than three months before, it was a cause for rejoicing and the psychological effect was reflected throughout the free world. among our troops who paraded so proudly down the chandelier, our fathers had follow the same flag a quarter of a century before, celebrating another victory, which they too had one in the best traditions of the american fighting man and who had come there, not for conquest, but to liberate. but the men of our fighting forces knew it was only one more important milestone along the rugged road to victory. allied armies held bridge heads
6:52 pm 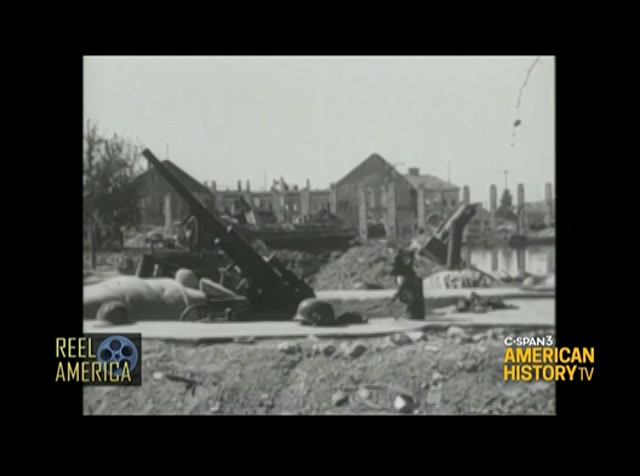 all along the line of the state. in the south of france, they captured -- and marseille. the british and canadian took brussels and the great port of and for. the first american army pushed across the border and drove on to liaise. the third third took very done. the third having crossed the rouge river reached their destination. now the allied front ran on the line all the way from the swift
6:53 pm 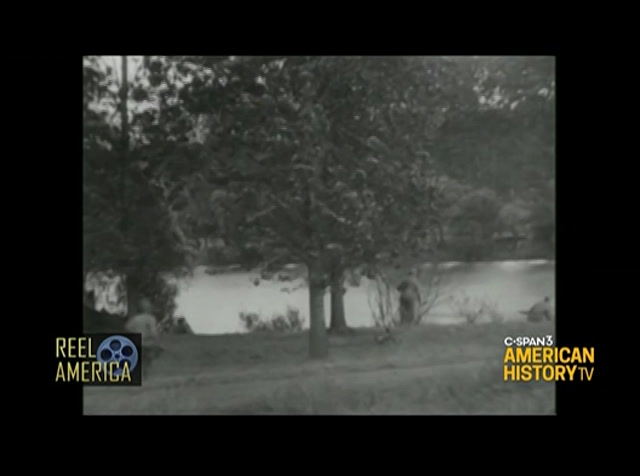 border to the lost sea. seventh army patrols coming up from the south met patrols from the third army. the two armies were now linked up, they coordinated offensives to come. retreat for nazi forces fought on the wrong side of the line was caught off. we rounded up our share of prisoners. the desperate plight of hitler 's army became more apparent as the world rejoiced over the
6:54 pm 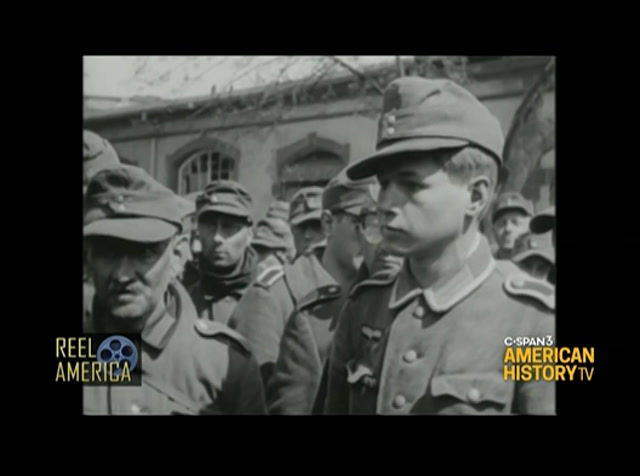 once mighty destructive force. they found themselves repeatedly destroyed by an army that was repeatedly told they would not last longer than nine hours. in the 19 seven days, the fifth corps head let the assault on omaha beach. it had come nearly 500 miles and they drove across the german border and on the soil of hitler's germany. who was it that once said the americans were no soldier?
6:55 pm 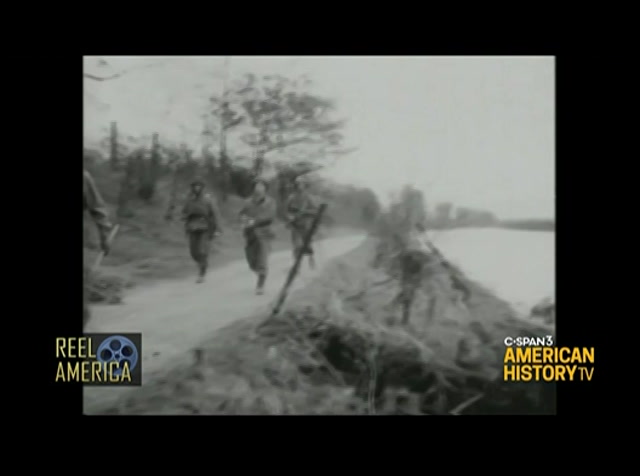 >> in world war ii, the american soldier proved his fighting quality as he always has and always will. he stands second to none and his leadership is second to none. from private to general, he has the product of a free society, liberty. to even have the power for his right to vote and free elections ensures his own commander and chief. he has a voice for making the laws. he has a precious siege to
6:56 pm 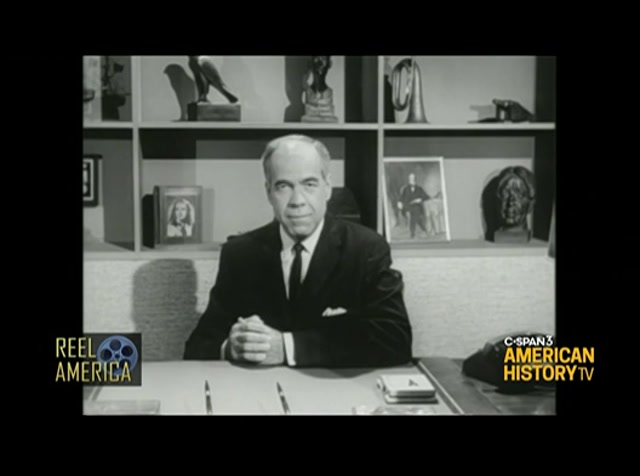 defend. much to fight for. but he must fight. to defend his good way of life, he prefers the art of peace. all men of good will do. yet, he knows how to practice the art of war. in some of the scenes filmed on the actual historic event documented in the series, you have seen the reaction to the american soldiers by newly liberated people in north africa, italy and france. to them, he was and still is a living symbol of freedom. he came to their land giving of himself. not for conquest, but to liberate, to defeat and destroy a ruthless aggressor. or we might well say, the aggressor. who like evil throughout history, lives on and who has
6:57 pm 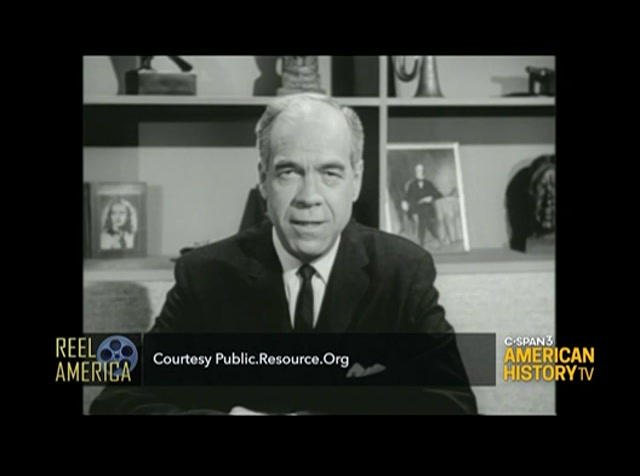 been known by many names. the aggressor. who would dictate and impose his will on those he conquered and enslaved. not the least among those who stood up to him is the american soldier. he knows the price of freedom is eternal victory. >> there is an ancient saying
left
right
disc Borrow a DVD of this show DVD
tv

Episode seven of a ten-part U.S. Army documentary from 1965 examines World War II in the year 1944, from Pacific Island campaigns to the D-Day invasion, liberation of Paris, and first incursions into Germany prior to the Battle of the Bulge. This aired on the "Big Picture" television series.