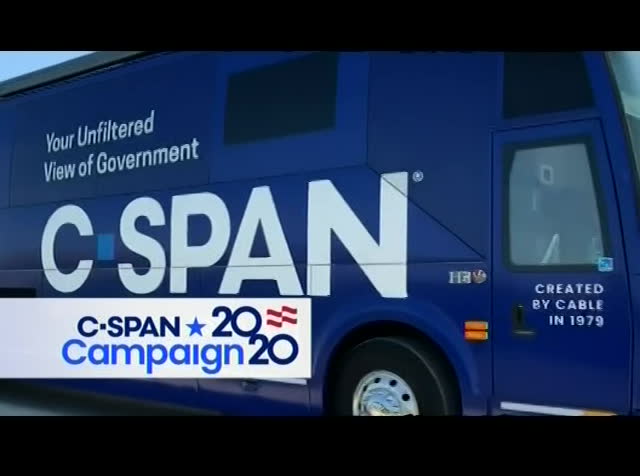 >> voices from the campaign trail, part of c-span's battleground states tour. former new york city mayor michael bloomberg traveled to norfolk virginia for his first cans pain stop -- first campaign stop. mr. bloomberg spoke about his decision to enter the race and took a few questions from reporters. >> thank you and good afternoon, it is great to be here. i'm happy to say i supported 14 other virginia democrats who won election, next to the good work of so many volunteers and supporters who knocked on doors.
6:54 pm 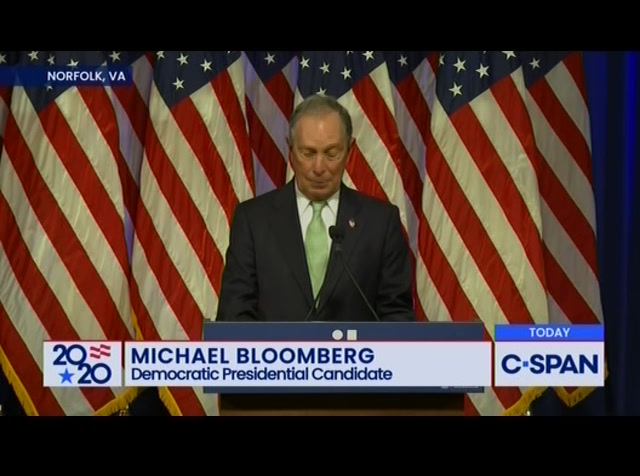 in january democrats will take charge of the state government for the first time in 25 years. it's about time. 2018 i supported two congressional candidates here in virginia who won. strong campaigns helped the democrats capture the u.s. house of representatives and began holding president trump accountable for his dangerous abuse of power. that's one of the pieces of good news we had recently. kicking my why am i campaign off right here in norfork? it's because southeastern virginia proves that with the right candidate we can turn areas from red to blue. we need to do that all across this country. i'm glad to announce i am
6:55 pm 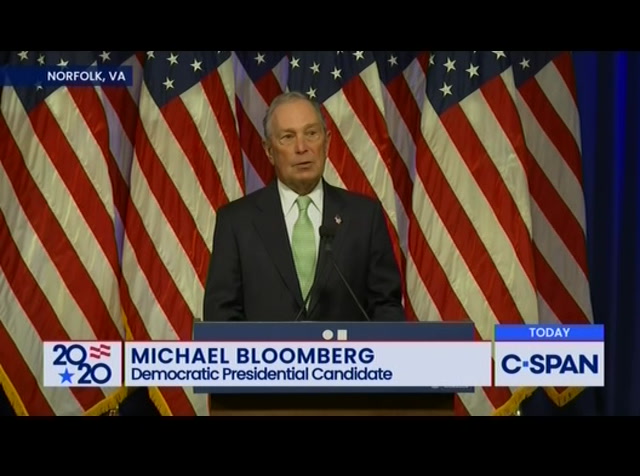 running for president to defeat donald trump and to unite and rebuild america. we cannot afford four more years of president trump's reckless and unethical actions. he is an existential threat to our country, to our values and our national security. it seems to bring another example of just how unfit he is to serve as our president. read the president forced out the secretary of the navy. a marine veteran. , "ietary spencer wrote cannot in good conscience obey an order that i believe violates the sacred both sides of to support and defend the constitution of the united states." that is an extraordinary rebuke.
6:56 pm 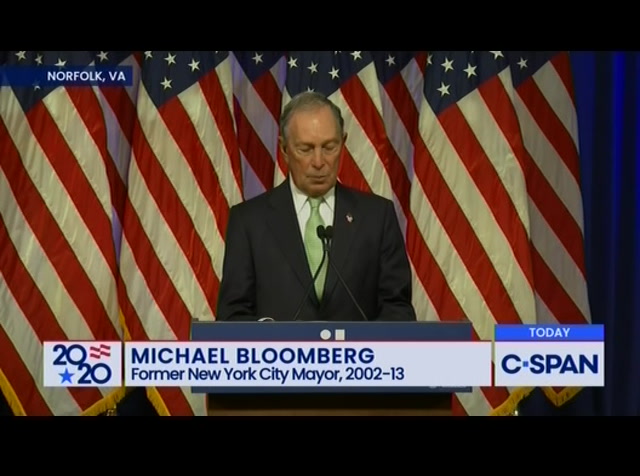 here in the city i salute notetary spencer for flinching for his duties. have at remains we president, a commander in chief who has no respect for the rule or for the values that truly make america great. if president trump winds another term in office we may never recover from the damage. by investing here at home and restoring our nation's capital at and moral leadership abroad. i believe my unique set of experiences and philanthropy will enable me to both win and lead. i will rally a broad a diverse
6:57 pm 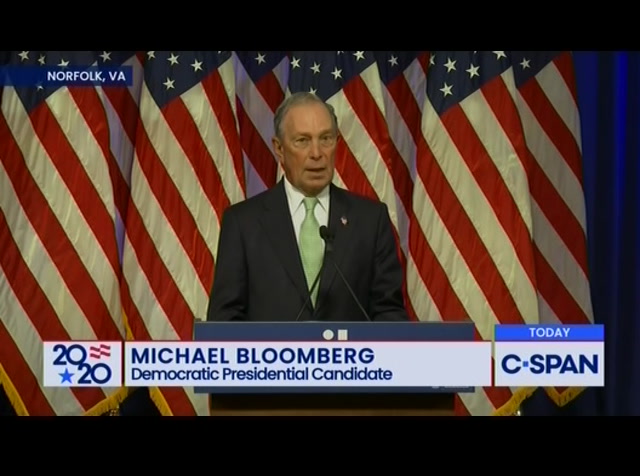 coalition to win. i will have the skills to fix what is broken and our great nation. there is a loft broken. that isan economy tilted against most americans. we have a health care system that costs too much and doesn't cover everyone. we have communities ravaged by gun violence. sure mass shootings has become almost routine. we have to put an end to this madness. make gun trying to islands a major issue of my campaign, just as i made a major issue of my life in government and philanthropy. and not stopping now. across the country we have schools that are preparing our
6:58 pm 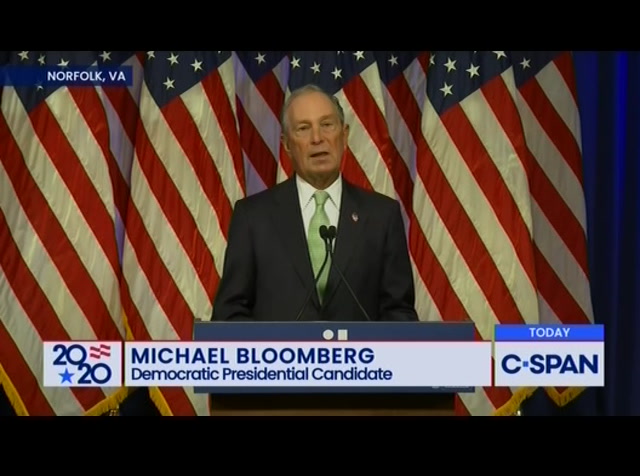 children. we have an immigration system that is cruel and dysfunctional. we have climate change growing worse by the day. and we have special interest that corrupt washington and black progress on all of these issues. should -- i was taught to believe in the promise and potential of america. at its best when we work together to find meaningful and lasting solutions to our big challenges. we need a president who understands truth and who can do it rather than just making promises. i offer myself as a problem solver. we say we have to be trump.
6:59 pm 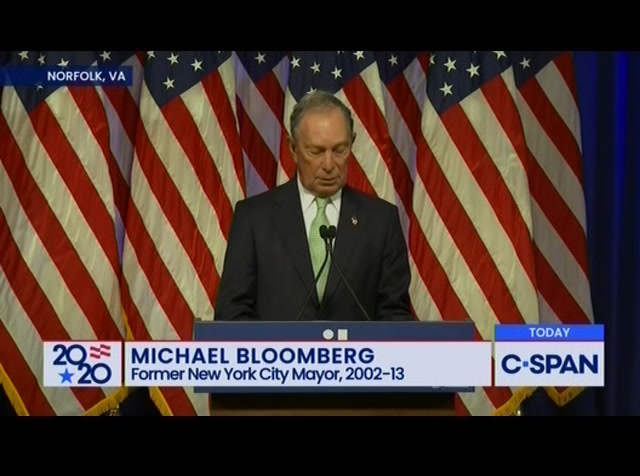 i want stronger gun laws and states across the country. i took on trump the climate denier and led efforts to close more than half of the nations power plants. trump is carrying water for big tobacco. i know what it takes to be -- to beat trump. defeating trump and rebuilding america is the most urgent and important fight in our lives my resolve is to stand up to the bigotry and hatred of wrongheaded policies he is anchored in, and in my belief in government as a force for good. it has worked well in business and in running the country's largest progressive city.
7:00 pm 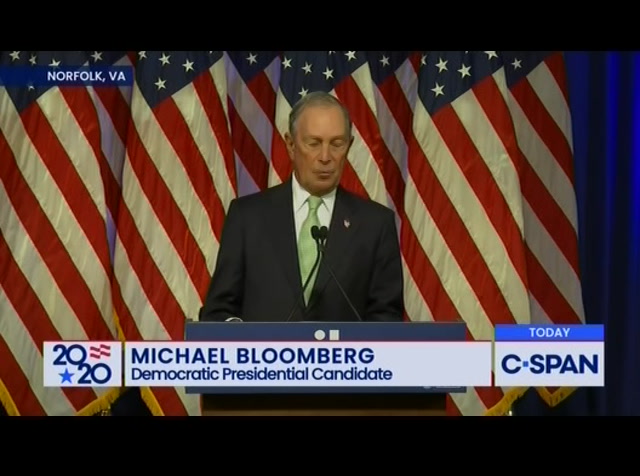 my father never earned more than $6,000 per year. i worked my way through college and got an entry-level job in new york. i've got laid off. i did have an idea to start a company. company employs 20,000 people. my company's please get well paid. if someone has a baby, the primary caregiver gets six areas maternity leave that's the same thing i brought to city government.
7:01 pm 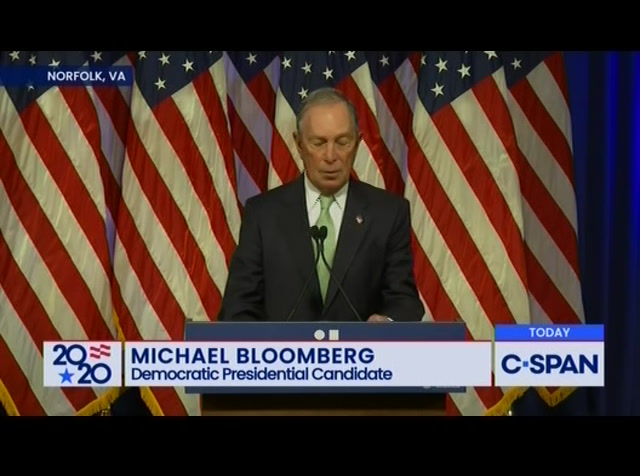 failing schools and lack of opportunity for those who were discriminated against. that'sople said to me just the way it is. why don't we do something about it? lucky enough to be elected mayor of america's most diverse city just weeks after the attack of 9/11. it was a frightening time for our city and country. we work with her teachers to negotiate the largest raids in america.
7:02 pm 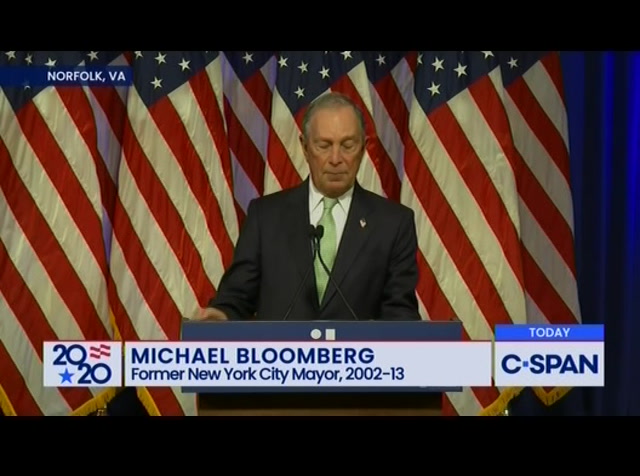 we also cut the city's carbon footprint by 14% and create new programs to combat poverty. and we expanded health care. i know government can improve people's lives. we should never settle for anything less. i foundaving city hall the largest gun safety group in history. today we continue to win battles against the tobacco industry. i know how to take the powerful special interest.
7:03 pm 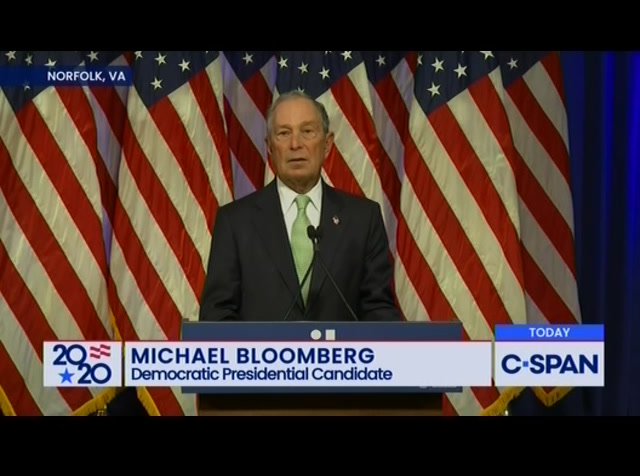 in ways we can be proud of, someone with the experience to hit the ground ready to go. just as i did for 12 years in new york city hall. over the course of this campaign i will tell you what i will do as president. providing good quality health care for every american. reducinggun violence incarceration. protecting lgbtq rights. supporting our veterans.
7:04 pm 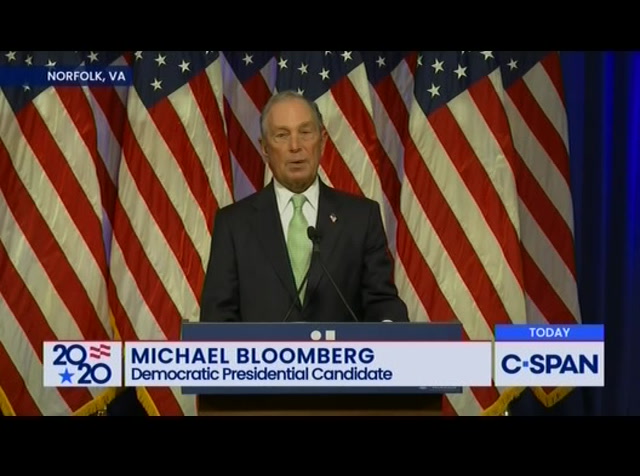 and reestablishing america's place in the world. to roll up my sleeves, to motivate our country. i'm ready to get to work. be happy to take a question or two. >> you get a chance to reach out? >> i was lucky enough to receive some very flattering calls between whoever made the call and if they want to talk about it for them. i would not violate their confidence. i didn't grow up in a world where a new famous people. when you get a call from one of them i pinch myself a little bit.
7:05 pm 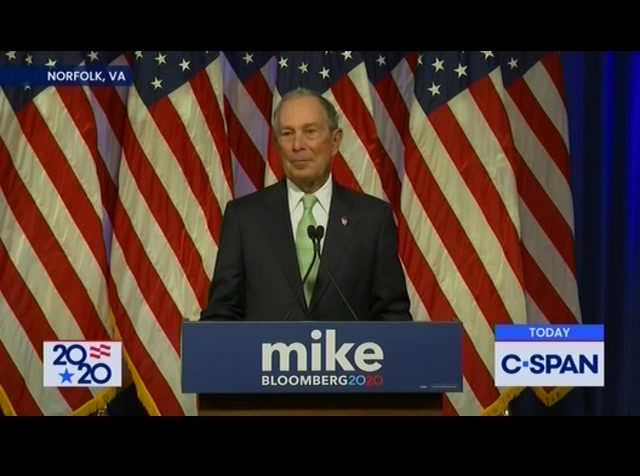 >> a lot of your democratic opponent are saying you're going to be spinning a lot of money that you are accusing of trying to buy your way into this race. i trying to buy the presidency? >> i have been using my resources for the things that matter to me. it has been very successful and i used all of it to give back to help america. committed to stopping climate change. i'm committed to doing things that i was lucky enough to be able to help with the house. from republican to democratic control, so that the house provided some oversight of the president. turning virginia from red to blue, both houses are now blue.
7:06 pm 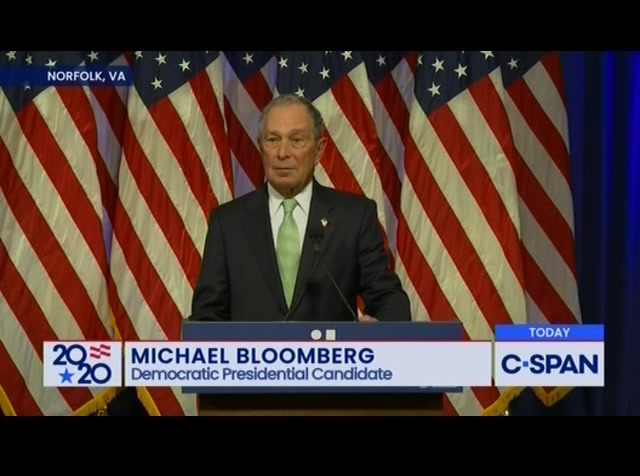 i'm fully committed to defeating donald trump. i'm going to make my case. smart voters make their choice. >> let me phrase it this way, i think there is a greater risk of having donald trump being reelected. remember the democratic convention in philadelphia in i said -- in 2016, donald trump was not suited to be president of the united states.
7:07 pm 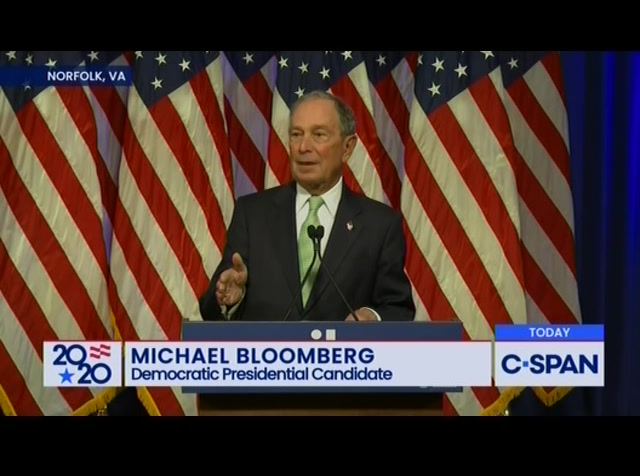 we have to do something about donald trump. i think i know how to beat him. that's what i'm going to focus on most. >> on impeachment, do you believe the hearings will fire back and turn voters away from the democrats? conclusionome to the that while impeachment is a very serious thing, and we should let november, i think heardnduct we have described in these hearings is such that if i were a congressman i would vote for impeachment. >> how do you plan to win over some of the minorities you need to win a democratic nomination?
7:08 pm 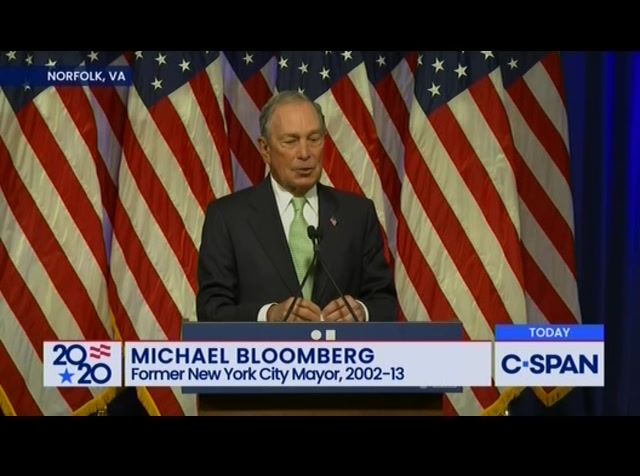 an awfulk i have done lot of things and have worked hard to make sure we track -- we tackle discrimination. new york city has had a record that's not perfect, but i think we should be proud of in terms of making it it a city to everyone. i have been a big supporter of gay rights and against any kind of discrimination i see. down andhe crime rate an awful lot of lives. we would have lost a lot of young people. i did the best job i could. have you talked to the dnc about how that might work? and if can set the rules
7:09 pm 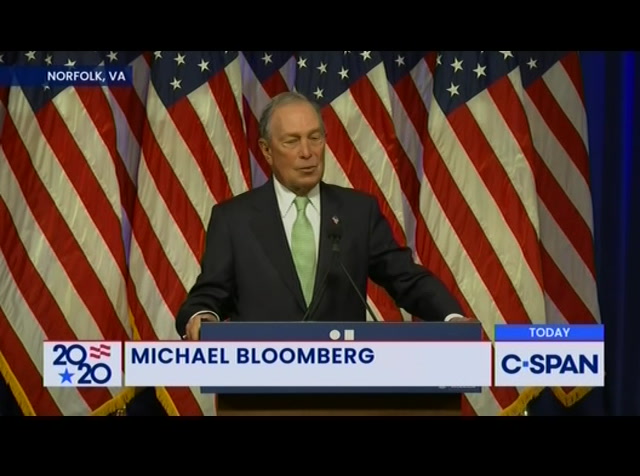 they set the rules where i qualify, i would certainly debate. what i want to do is talk directly to the public and andain what i have done what i would do and give them some comfort in the past. i want to thank the people from virginia. to phoenix, arizona tomorrow. i have no idea but we are going to do that test, and it's called voting.
7:10 pm 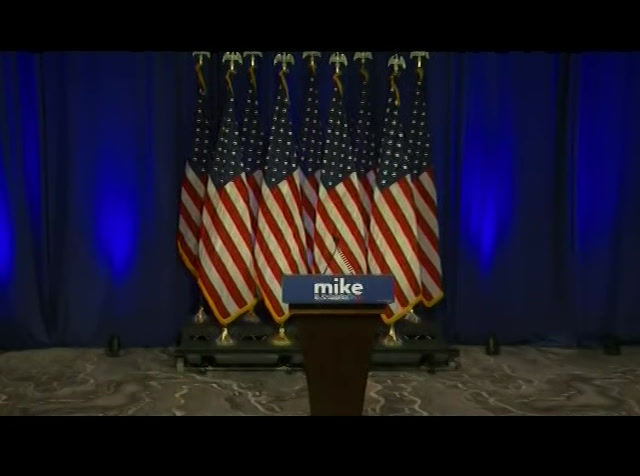 his first rally in the state since taking his official residence -- changing his official residence from new york to florida. live coverage starting at seven eastern on c-span. >> a preview of what is available every weekend on c-span three. starting tonight at 8:00 eastern. historian and a park ranger gives an illustrated presentation on boston's role the origins of the revolutionary war. on three pivotal events, the boston massacre, the boston tea party, and the battles at lexington and concorde. this is part of a daylong symposium.
7:11 pm 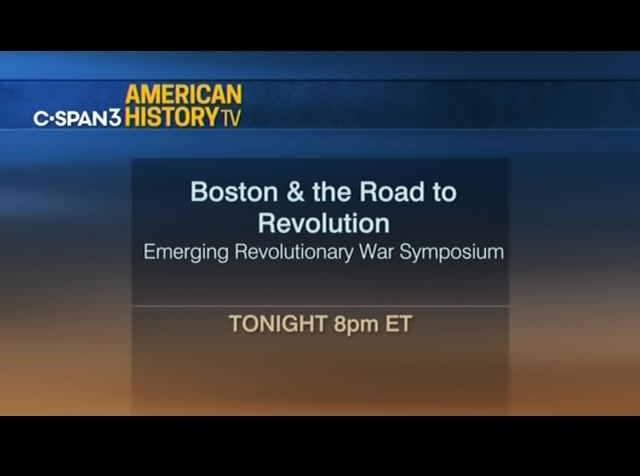 Michael Bloomberg, a Democratic presidential candidate and former New York City mayor, spoke to reporters in Norfolk, VA, after meeting with voters in Selden Market. This was his first campaign event since announcing his candidacy for president. Mr. Bloomberg gave brief remarks on why he decided to run for president, and then answered questions from reporters.