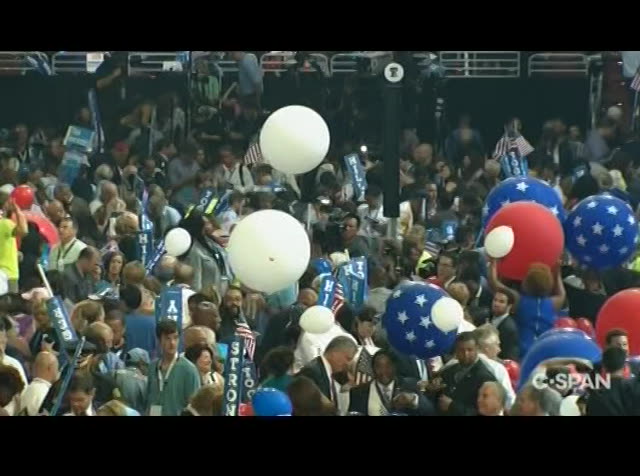 differs from all other political coverage for one simple reason, it is c-span. we have brought you your unfiltered view of government every day since 1979. this year, we are bringing you on unfiltered view of the people hoping to steer that government. in other words, your future. this election season, go deep, direct, and unfiltered. see the biggest picture for yourself and make up your own campaign c-span's 2020, brought to you as a public service buyer television -- by your television provider.
5:33 am 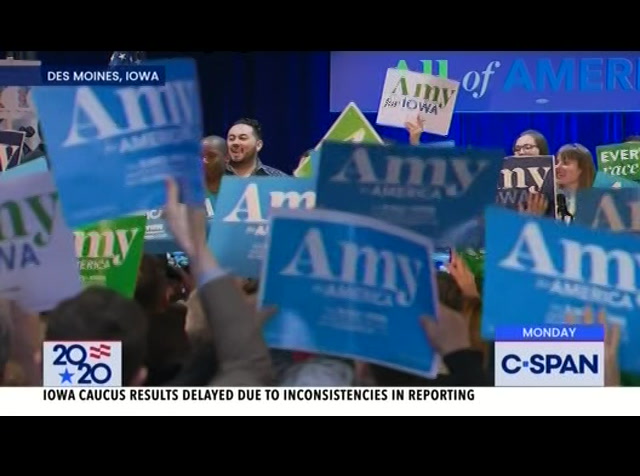 >> now from des moines, we will hear from several democratic presidential candidates on caucus night as they spoke to supporters before there was a declared winner. according to a statement, there were inconsistencies in the reporting which led to the delay. >> [crowd chants "amy!"] sen. klobuchar: thank you so much. unbelievable. you probably heard we do not know the results. but i do not want to let another minute go by without thinking all of you. [applause] we know there are delays, but we know one thing, we are punching above our weight. [cheers] my heart is full tonight. one, because i have my great chair here.
5:34 am

two, because i have a fantastic staff. and three, because my husband and daughter are here with us. i want to thank them and our tireless field organizers, the unstoppable volunteers who would never give up, and we are feeling so good tonight. i cannot wait, somehow, some way i will get on a plane to new hampshire. [cheers] we are bringing this ticket to new hampshire. so even in a crowded field of candidates, even during the well-earned impeachment hearing of donald j. trump, which kept me bolted to my senate desk for the last two weeks, we kept fighting, and you kept fighting for me. we have started in a blizzard,
5:35 am 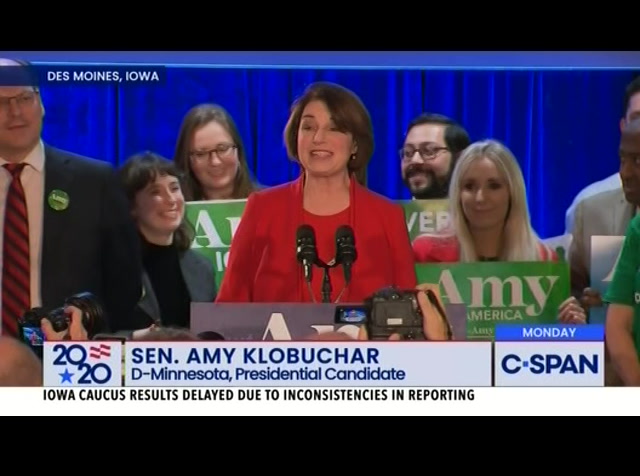 and a lot of people didn't predict i would finish that speech. in the summer they kept saying, will she make it through the summer? then after debate after debate, and all i can say is we are here and we are strong. [cheers] and with the same grit that got us through the blizzard, we are ready to head to new hampshire. my friends in iowa, you know we have beaten the odds every step of the way, we have done it on the merits and with ideas, and with hard work. [cheers] we know in our hearts that in a democracy, it is not about the loudest voice or biggest bank account, it is about the best idea and it is about the person
5:36 am 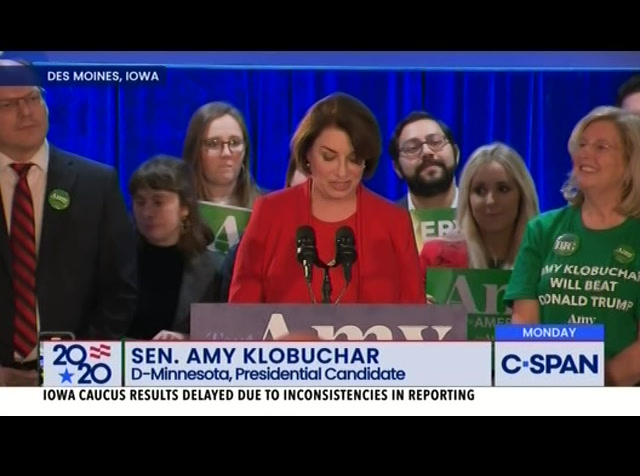 that can turn those ideas into action. we know that our party cannot win big by trying to out divide the divider in chief. we know that we win by bringing people with us instead of shutting them out. donald trump's worst nightmare is that the people in the middle, the people who have had enough of the name-calling and mudslinging have a candidate to vote for in november. donald trump's worst nightmare is that fired up democrats will march to victory alongside a big coalition of independents and moderate republicans who see this election just as we do, that this election is yes, and aonomic check, but it is also patriotic check. it is a decency check. it is a simple idea that the heart of america is so much bigger than the heart of this guy in the white house. [cheers]
5:37 am 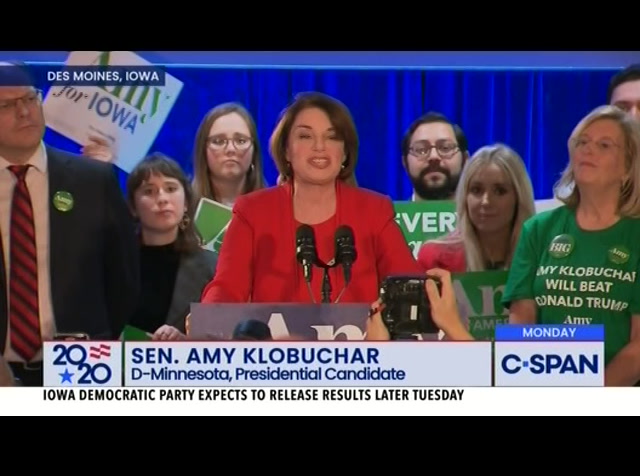 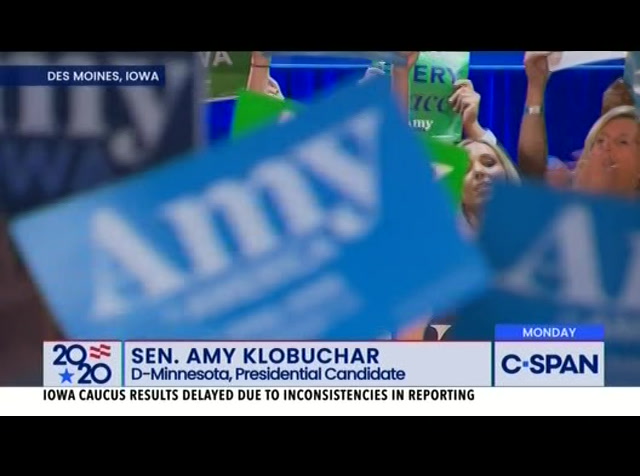 hundred bills as the lead democrat in the united states senate. that is how i have won elections in the reddest of red congressional districts, in the bluest of blue congressional districts. the president might as well have a sign on his desk that says, the buck stops anywhere but here. look at what he has done, he blames everyone for our problems, he blames everyone, people that should not be blamed. he blames immigrants, he blames barack obama, he blames the fed chair that he nominated, the energy secretary he appointed, the generals he commands, and, yes, the king of denmark. he even recently blamed justin trudeau for cutting him out of
5:39 am 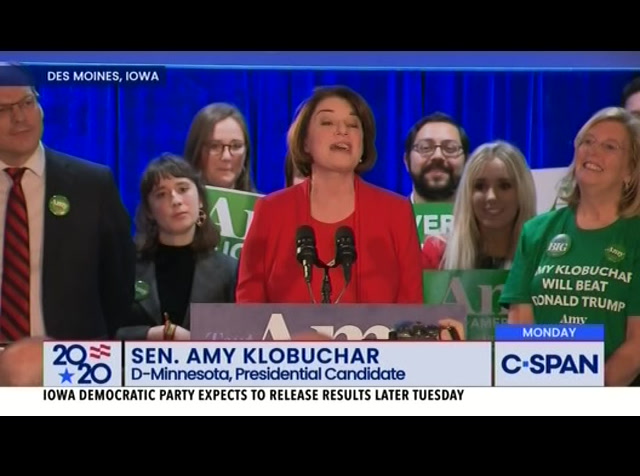 the canadian version of "home alone 2." [laughter] who does that? who does that? so let me tell you what i will do. when i am behind that desk, i will take responsibility instead of passing it on. i will reach across the aisle and work with americans in good faith. instead of picking fights, i will bring this country together instead of pushing it apart. some of you may know that old story about franklin delano roosevelt, a story about how after he died they put his body on a train and it worked its way to washington, d.c. there is a story of a reporter who came upon a man who was crying by the side of the tracks, and he had his hat on his chest and he was sobbing. the reporter said, do you know president roosevelt? and the man said, no, i did not
5:40 am 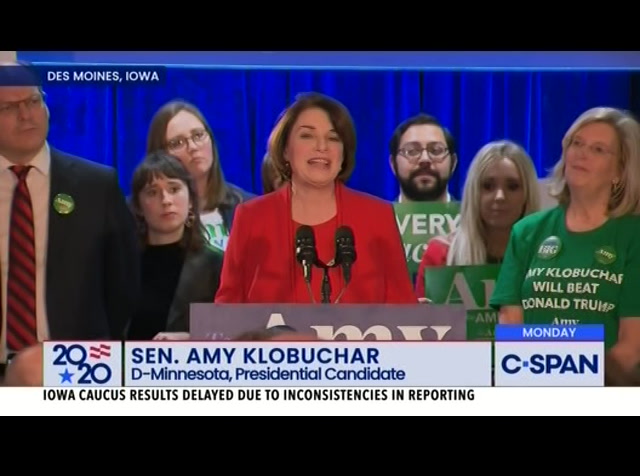 know president roosevelt, but he knew me. he knew me. what we are missing so much right now in our country is that sense of empathy. we are missing that caring. and i promise you this, i will bring back that sacred trust between the american people and the president of the united states. [cheers and applause] if you are sick and tired of hearing how great the economy is when you do not feel it, when your paycheck is stretched to the breaking point month after month, i know you and i will fight for you. if you are sick of choosing between paying for daycare for your kids and long-term care for your parents, i know you and i will fight for you.
5:41 am 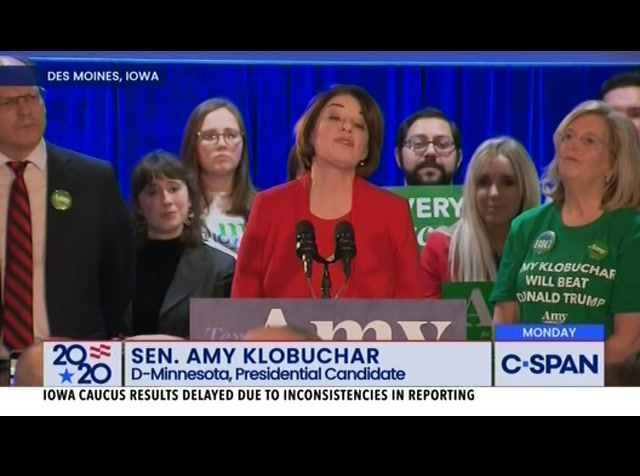 if you are sick of being torn between filling a refrigerator and filling a prescription, i know you and i will fight for you. if you want a democratic nominee who can make our tent bigger and our coalition wider, and our coattails longer -- [cheers and applause] [crowd chants "amy!"] sen. klobuchar: if you know that, i will fight for you. have a home with me. -- if you are sick of the noise and the nonsense, you have a home with me. so please join our campaign at amyklobuchar.com. join us because we will be here
5:42 am 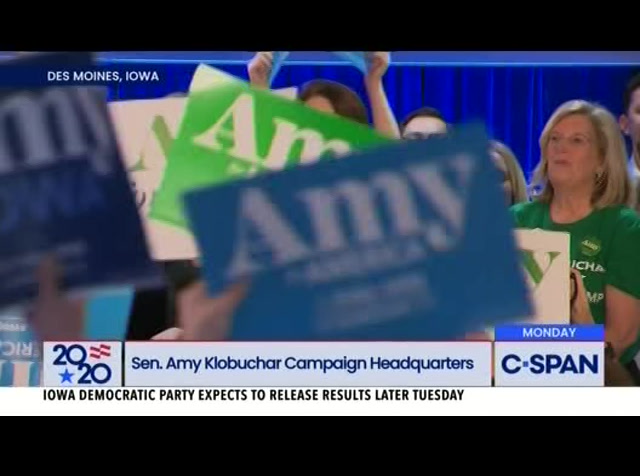 it looks like a really long time tonight. you will have plenty of time to join us. stay up, let's stay in a good spirit, because you know what happened out there in those precincts, you know we have been punching well beyond our weight. and despite limited resources compared to bigger bank accounts, we are way on the board. let's stay up, let's stay happy, and let's go to new hampshire. thank you, iowa. [cheers and applause] >> [crowd chants "amy!"]
5:43 am 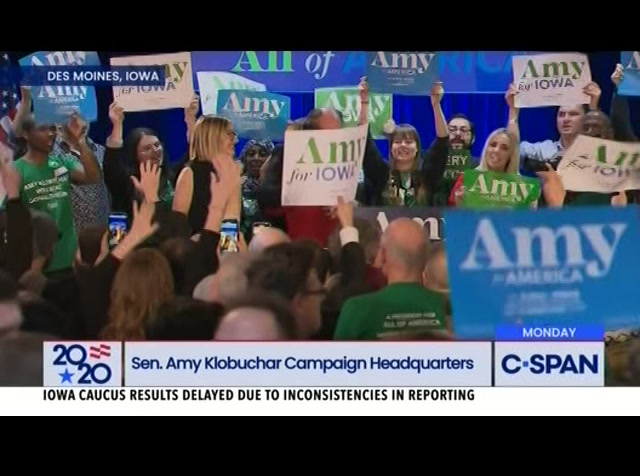 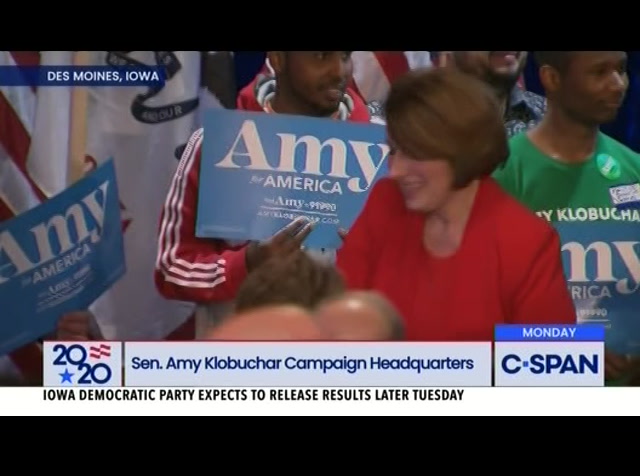 . klobuchar: you guys, i want k one very special person, lauren dillon, our incredible stage director. [cheers] say she is from brooklyn, iowa, and has been with us from the beginning. she has put together an incredible team, a happy team, and we have had an amazing time
5:45 am 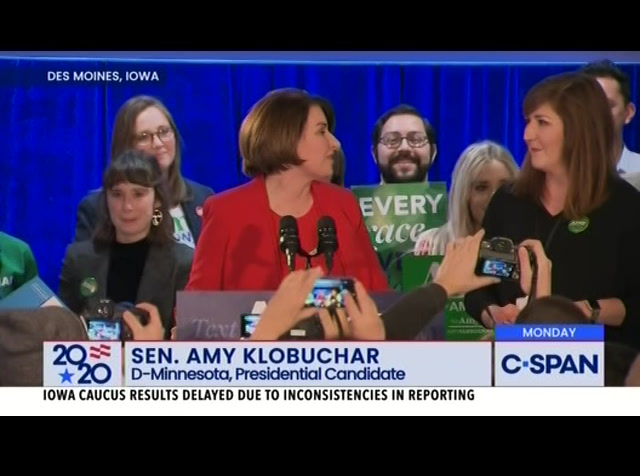 with all the volunteers. thank you for everything you have done. [cheers] ok. we can put the music back on. [indistinct voices] ♪
left
right
email Borrow Program
tv

Senator Amy Klobuchar (D-MN), a candidate for the 2020 Democratic presidential nomination, delivered remarks to supporters after the close of Iowa's first-in-the-nation caucuses. At the time of the speech, there was a delay in the caucus results due to inconsistencies in reporting.