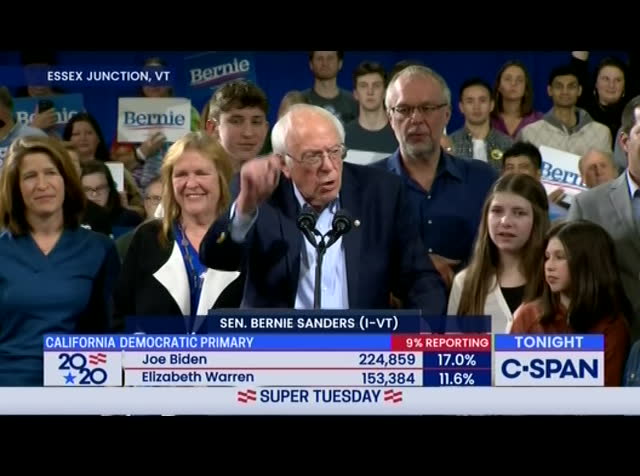 our hearts, thank you all very much. house.o on to the white thank you! [cheers and applause] ♪ ♪
12:09 am 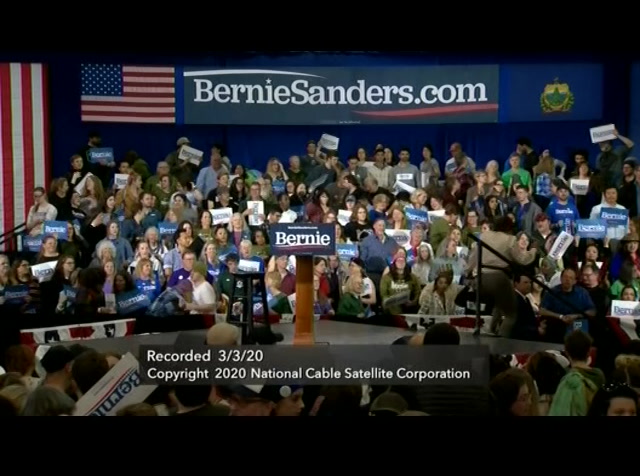 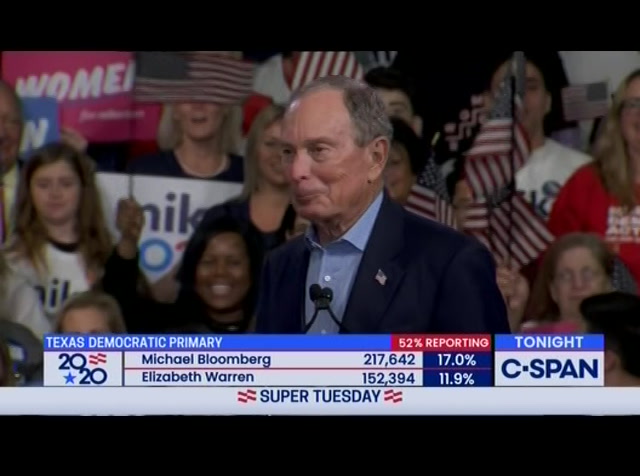 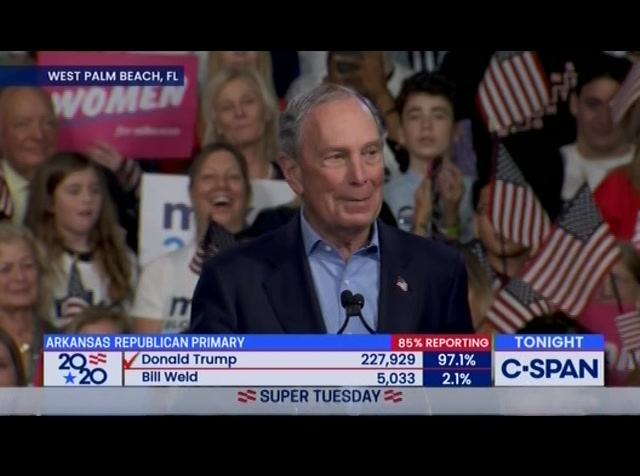 [laughter] [cheers] i came here because winning a november -- in november starts with florida. [cheers and applause] and if i'm the nominee, let me make you this promise. we will beat donald trump here in florida and in swing states around the country. [cheers and applause] now tonight, the polls are still open in a number of super tuesday states. and as the results come in, here is what is clear. no matter how many delegates we win tonight, we have done something no one else thought was possible. in just three months, we have gone from 1% of the polls to being a contender for the democratic nomination for president. [cheers and applause]
12:12 am 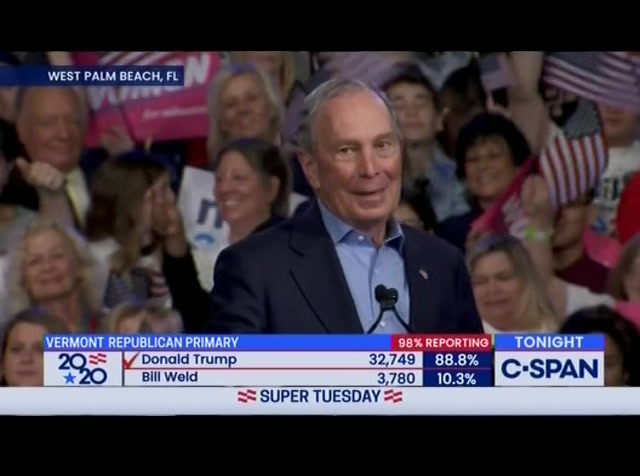 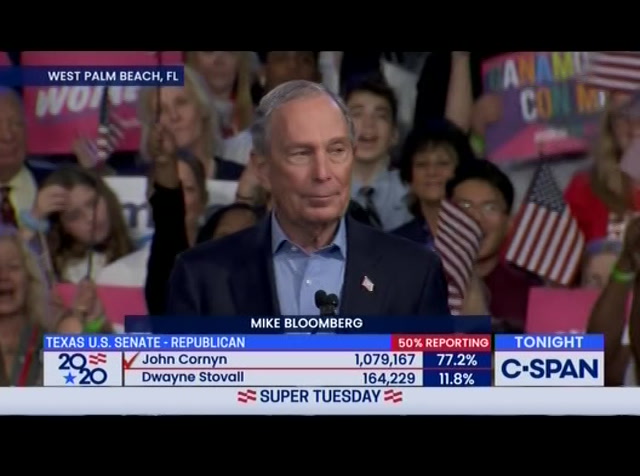 [cheers and applause] and this is a campaign to bring our country back together. and put the united act in the back inut the united the united states of america. [cheers and applause] that is the message i have been delivering not only to democrats, but swing voters who actually decide who will be our next resident. [cheers and applause] and tonight, we proved something very important. we proved we can win the voters who will decide the general election. and isn't that what this is all about? while my fellow candidates spent a year focusing on the first four states, i was campaigning against donald trump in the states where the election will actually be decided, like wisconsin, and michigan, and
12:14 am 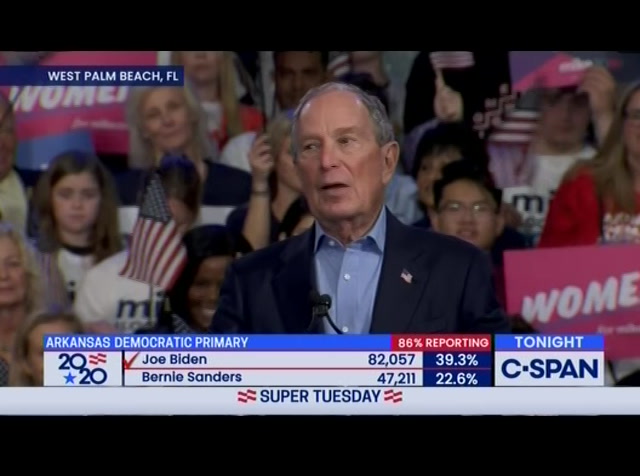 today, he sent a tweet out urging people not to vote for us. gee, i wonder why? [laughter] clearly, trump is scared stiff of facing us, and for good reason. in every campaign i ran for mayor, we built a broad coalition that brought democrats and independents and moderate republicans together. donald trump the other day called me short. i said, donald, where i come from, we measure people from the neck up. [cheers and applause] that is how we are going to beat donald trump. i believe we need a leader who is ready to be commander in chief, not college debater in chief. so if you want someone who talks turkey and has a record of a college -- of accomplishment on
12:16 am 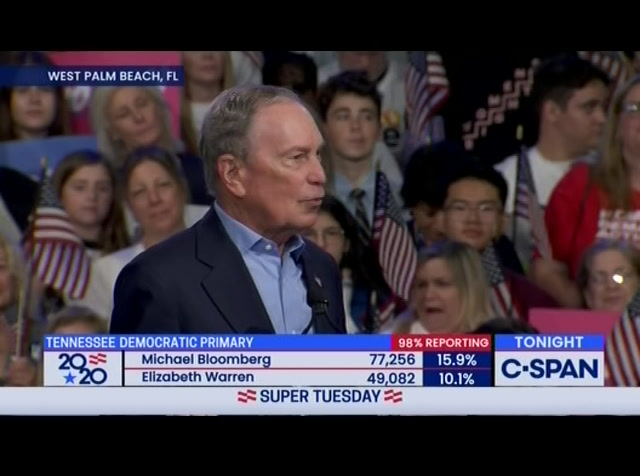 all the big issues facing our country, and who has the resources to beat trump, i am your guy. [cheers and applause] and while trump tweets, i follow facts, respect data, and tell the truth. my whole career, i have been a doer. and i believe we need less talk, less partisanship, less division, less tweeting. [cheers and applause] in fact, how about no tweeting from the oval office ever again? [cheers and applause] now you've probably heard our will getslogan, "mike it done." let me tell you what it is. the it means winning in november and sending donald trump back to mar-a-lago permanently. [cheers and applause] but that is just the beginning. because getting it done means
12:17 am 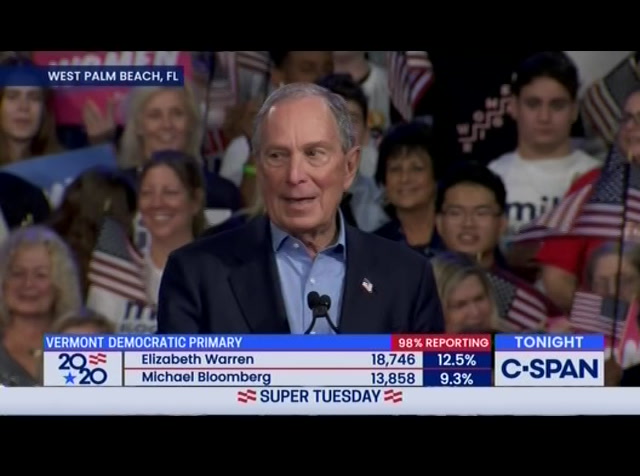 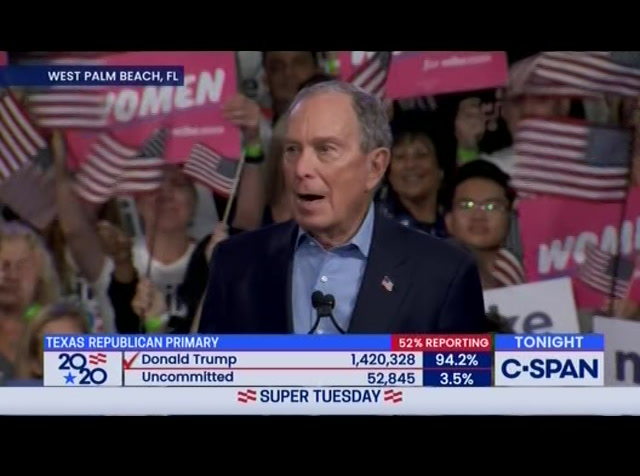 our campaign is a fight for america's ideals and values. it's a fight to build a better future for everyone. not to bring back a past that left so many out. it's a fight we cannot afford to lose. so i need your help, and i need your vote. and when you talk to your friends and families, tell them, if you want quality health insurance for everyone, not just empty promises, if you want to combat inequality with fairer taxes and better jobs, if you support my commitment to public education no matter what zip code you live in, if you share my belief for opportunity for all and not just a few, if you're ready to protect and defend the constitution of the united states of america. [cheers and applause] and if you are ready to clean out the oval office and get things done.
12:19 am 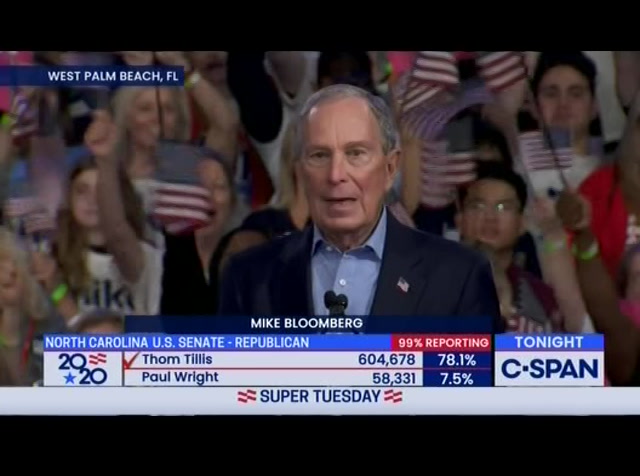 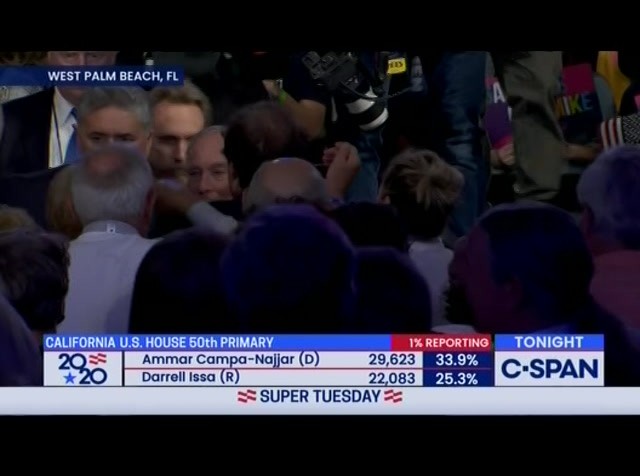 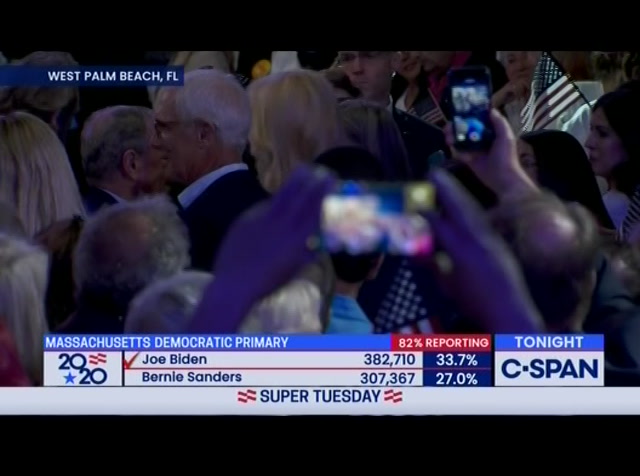 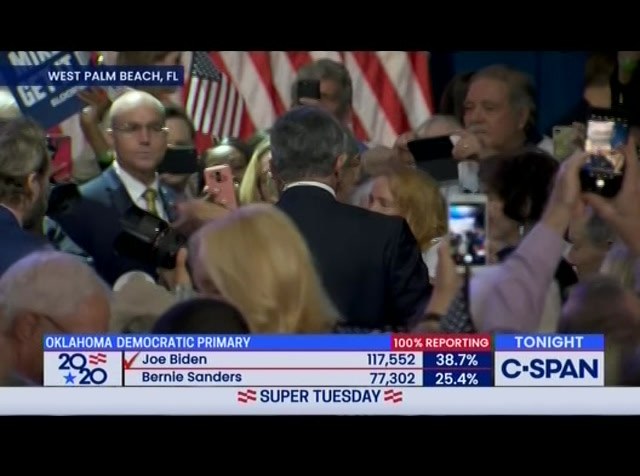 ♪ announcer: during this election season, the candidates beyond the talking points are only revealed over time. but since you can't be
12:23 am 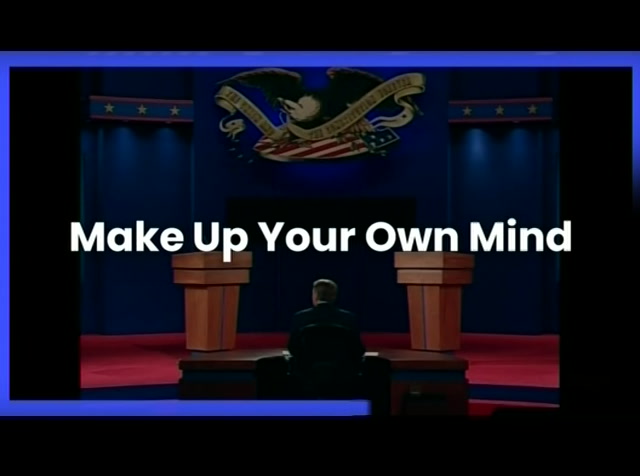 everywhere, there is c-span. our campaign 2020 programming differs from all political coverage for one simple reason, we bring in your unfiltered view of government everyday since 1979. this election season, see the biggest picture for yourself -- direct on and unfiltered so you can make up your own mind. --ught to you by are by your cable or satellite provider. announcer: c-span's washington journal live every day with news and policy issues that impact you. coming up wednesday morning, we are getting your reaction to the primary results from super tuesday. join the live conversation all
12:24 am 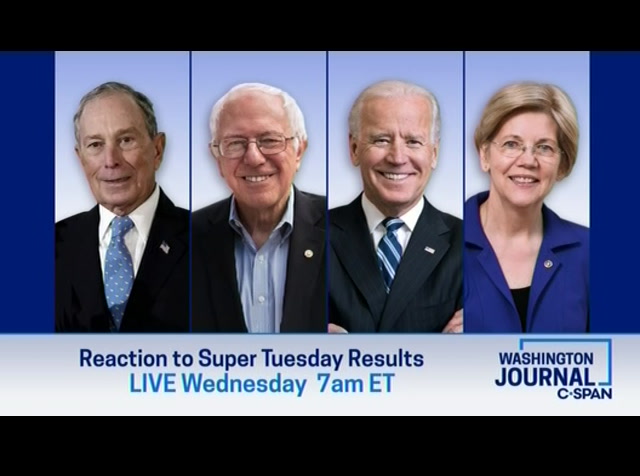 morning with your phone calls, facebook comments, text messages, and tweets. be sure to watch c-span's washington journal wednesday morning at 7:00 a.m. eastern. join the discussion. is a look at the live coverage one thing. on c-span, the houses back at 10:00 am eastern for general speeches followed by legislative is this at noon. aey are expected to work on bill dealing with the rights of tsa officers and make -- may take up emergency supplemental funding for the coronavirus. at 10:00 a.m. on c-span2, the u.s. senate convenes for geothermal research. on 10:00 a.m. on c-span3, the national institutes of health testifies for the 2020 budget for the agency and work on the nih researching the
12:25 am 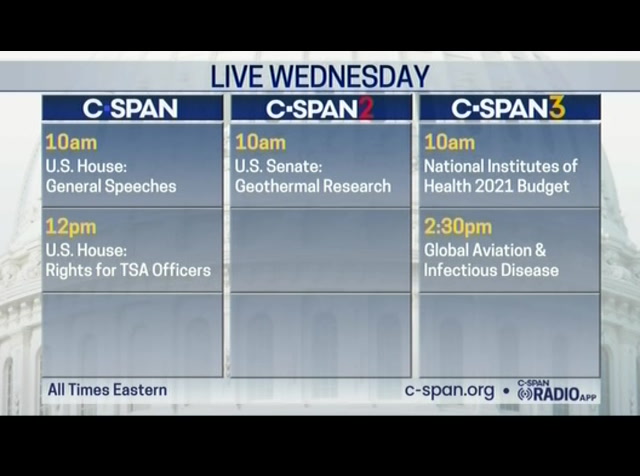 coronavirus. a 2:30 p.m., a hearing on global aviation and containing the spread of infectious disease. acting u.s. customs and border protection are commissioner, mark morgan, is among the witnesses scheduled to appear before the senate aviation subcommittee. announcer: c-span, your unfiltered view of government, created by cable in 1979 and brought to you today by your television provider. massachusetts senator elizabeth warren spoke from detroit on super tuesday. she lost her home state primary, finishing third behind joe biden and senator bernie sanders. ♪
left
right
email Borrow Program
tv