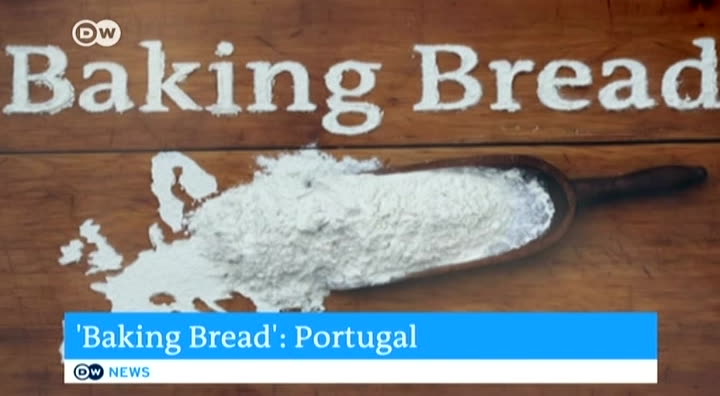 and series baking bread will. be all that matters who's making his way around the europe. the sixty ninth burn in film festival is about to get underway and it will be the last one for a festival directed to a costly he's been in charge for nearly two decades and in that time he's raised its profile by one of the major film festivals in the world. by colleague melissa holroyd about what's in store this year but first a look back ten yeah. we caught up with to talk us look at butlins film and television museum. the current photo exhibition there on the history of the belly nala also tells his story as festival director. he took over the helm in two thousand and one. for me to act as you see it was exciting because it's such a huge festival. number of initiatives we've expanded the film market the
7:46 am 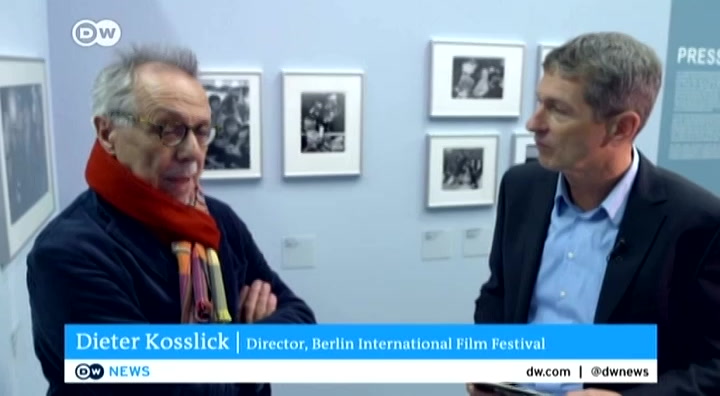 co-production market cooperation with the book and the biggest project was the talent campus called simply talents today. more than seven thousand young people have been. nearly ten percent of the films we've shown each year have involved someone from the talent companies whether as a director actor rule set design to. design a. coslet also gave german sentiment a special platform including inviting german directors to the main competition. i repeat this is to was really the first year that we started always having german productions in the competition the entire sometimes as many as four and interestingly when you look at the statistics these german films all the actors in these german films have won a lot of silver bear awards and feeling a bit. and german turkish director fattish akon even won the main golden bear prize
7:47 am 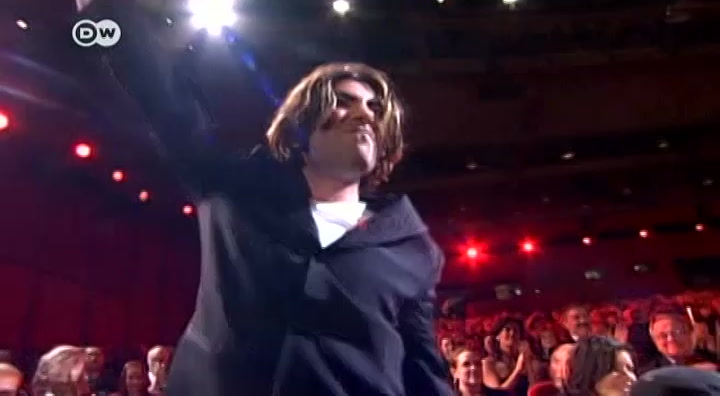 for best film in two thousand and four for his powerful relationship drama head on . that's right was the moment that was a big moment i realized that on the red carpet arab language t.v. stations were suddenly there the whole world flew in from i want you for all i know when the rolling stones walk down the red carpet in two thousand and eight that was a dream come true for a cause like a passionate music fan they presented their documentary shine a light directed by martin scorsese. for off the bicycle and for the leader of the press conference he said he would thank you ditto for inviting us on the father and i wasn't there but someone ran out and said hey you should download that as your ring tones. thank you i didn't download it but it was
7:48 am 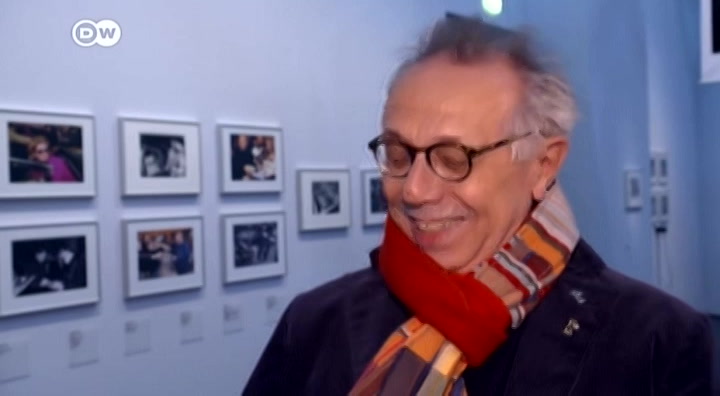 a great evening one of the best experiences i've ever had here and it was the d.c. i did because like has skillfully struck a balance between hollywood glamour and powerful films addressing politically relevant topics in twenty fifteen the jury awarded the golden bear in absentia to a rainy and director jeff harp on a he was forbidden to leave the country the next year the main prize went to fire it see an italian documentary about the refugee crisis cost. also turned the belly knowledge into the world's largest publicly accessible film festival with hundreds of screenings across the city film fans have the chance to see their idols up close even global superstars like shah rukh khan. trouble khan to decent shah rukh khan did the red carpet and went up to his fans even hugging which never happened people usually just take selfies i don't think anyone has as many fans as he has. after eighteen years in the spotlight this is
7:49 am 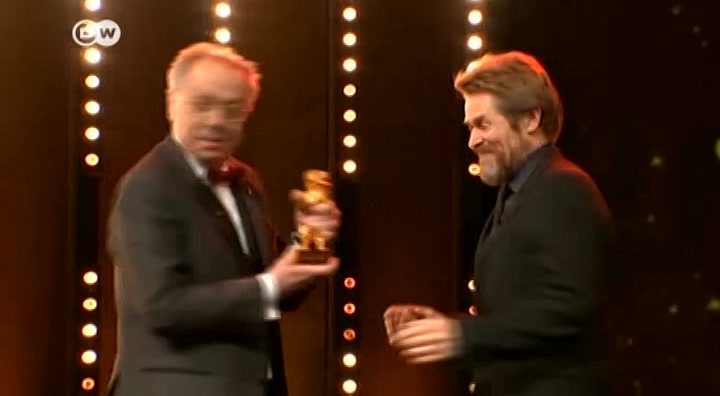 due to a cost looks final barely nala he leaves behind a legacy that will go down in film history. my colleague mr horowitz and now now it's his song but he's leaving behind a pretty vibrant festival he's leaving behind. a very very good legacy he's certainly raised the billion dollar to be among the three best festivals in the world the other two festivals can venice there are a lot more focused on the competition itself but the berlin nala is really a festival for the people which is also why it became so big it's also a very political festival what i think is interesting is that what he's praised for here what we've just seen is also what he's been criticized for people say that the berlin ali is too big and that that means the standard has gone down and they also say that he's willing to like to take political risks but not really cinematic ones
7:50 am 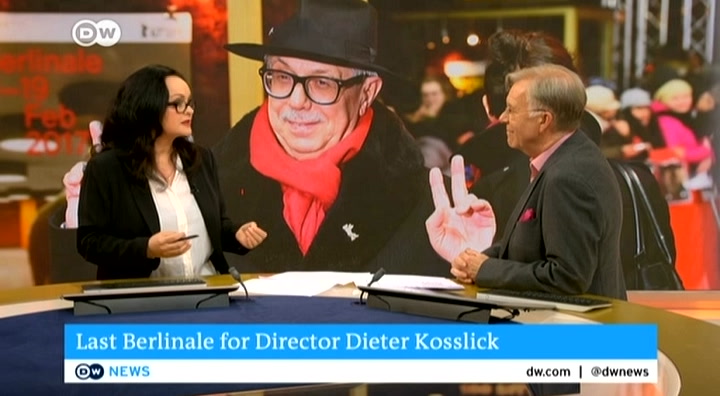 it's always going to happen i was there i mean ok it's his last belinelli what's in store for us well over four hundred films for a start seventeen of those films are in competition for the golden bear and seven of those seventeen have been directed by women just thinking about the venice festival where only one of their films in competition was directed by a woman in twenty eight ok let's look briefly at the competition. what's call your art the opening film for a start the kindness of strangers that's called by danish director lone a share. it's a modern day fairy tale about outsiders who cross paths in a new york restaurant ok and mr jones enough to choose another film by star polish director agnieszka holland it's about a journalist who travels to moscow in one thousand nine hundred eighty three and discovers the myth behind the communist utopia ok for the moment thank you let's
7:51 am 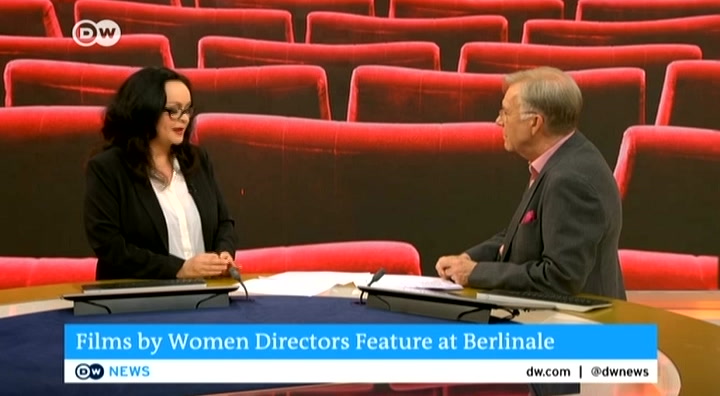 have a look at. from the ok so you. see. i'm on my way to marco now that i've been trying to reach you so we're coming here . again this time arranging an interview with please tell me you know way go through what we do around here you see a secret. prison on. the phone i read. something. like. paul. paul. you know what i ate oh. ok that cup of films accomplished what
7:52 am 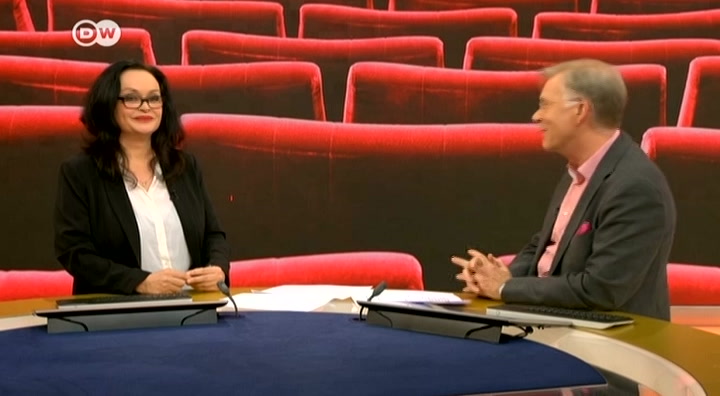 about other ones in the panorama section there is a film called flatland by jennifer cobe asked which tells the story of three very different women in south africa who embark on a journey of self discovery. the images here. and we've talked about being female directors who is a few and. the world judy have been all shot this year is the jury president absolutely yes she's a very very welcome jury perjury president a lot of people are very very pleased about that she said and a huge career herself both in france and around the world will well actually we're going to have more on juliette binoche and shahram things getting a lifetime achievement award as well she's getting a golden bear for
7:53 am 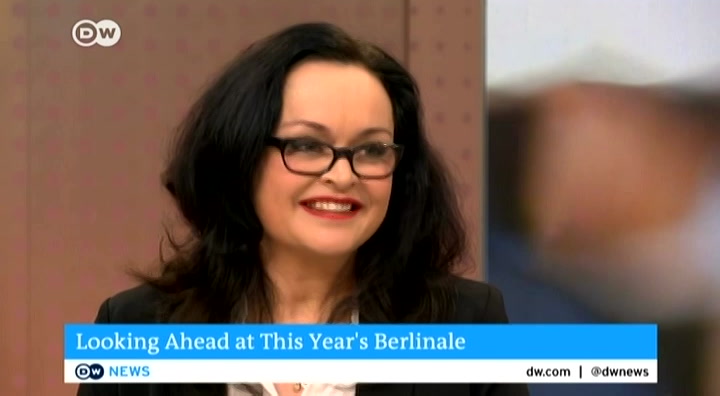 a lifetime achievement that's right all right thank you for fun. thanks very much melissa sorry and that's just a taster of course we'll be diving into the festival on a regular basis here on arts and culture over the next ten days now it's time for our series baking bread our europe correspondent matters is a passionate bacon has taken on the task of baking the national bread of each european union member states including britain will have to do that one quick anyway he mixes it also with some local history as well this week it's portugal. a little bit. that's what they used to say about this part of the you. know country of aging infrastructure traditional dances melancholy people and even more melancholy fish want to go is the oldest state in europe its borders have remained
7:54 am 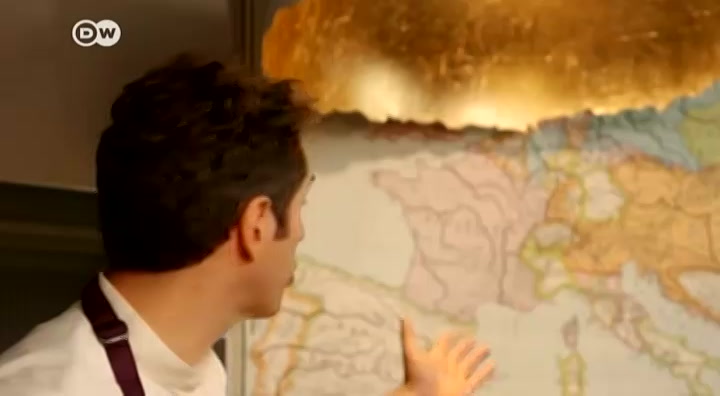 the same since the twelfth century but the country has changed radically. today portugal is hot just like it's cornbread the plough the middle. welcome to the captain's kitchen. corner was first brought support to go by sailors from the new world. it was much cheaper. and quickly became a food staple for the poor. take polenta that's a kind of medium ground corn meal and at the tables of sea salt and boiling water mix well and let it cool dissolve one teaspoon of sugar in lukewarm water and
7:55 am 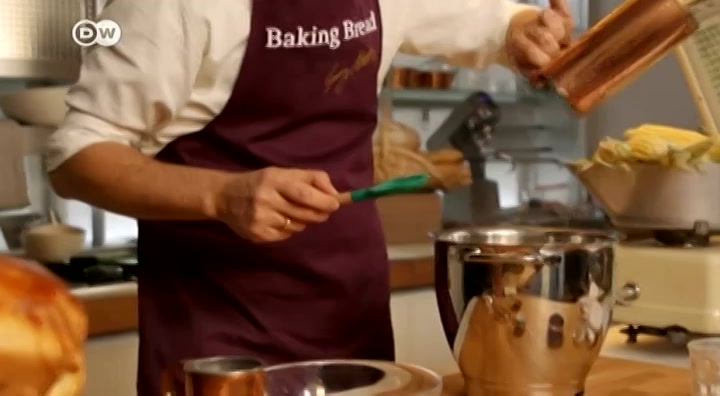 sprinkle over the yeast after ten minutes mix everything together with plain flour . the traditional way of doing that is by hand. but dictatorship kept portugal underdeveloped for decades until nine hundred seventy four when the portuguese showed their flower power not this flower that's what i'm talking about the carnation revolution it brought the dictatorship to a peaceful end and slowly turned the country. towards modernity so feel free to use an electric mixer for a meeting. this should take about eight minutes until the dough is elastic now and dries to roughly double its size just like the portuguese economy and today's european union it's risen steadily out of the deepest recession and many
7:56 am 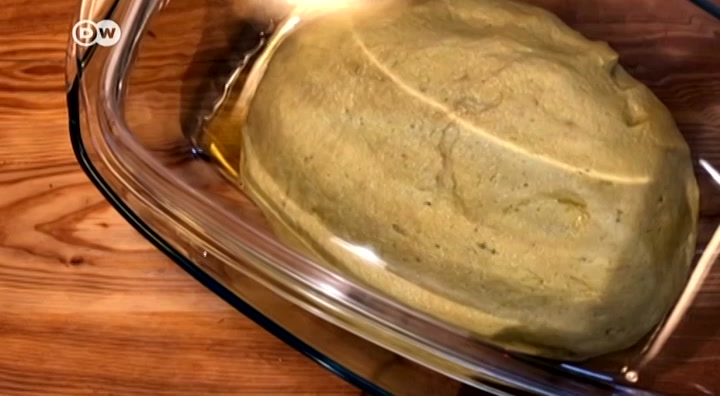 people say it's thanks to this man. mario seventeen on the head of euro zone finance ministers he michette to portugal's recent economic comeback. is that what they feed you in brussels. those puny rolls ok that's better. seventeen of those of course that if you need column e. goes into recession it's bound to bounce back. if you punch down the toe when that's the next step. let it rise again. yes it will take some time but that's what a country just like a loaf will need in this case one hour. to. score the bread. and bake at two hundred twenty degrees celsius for forty minutes.
7:57 am 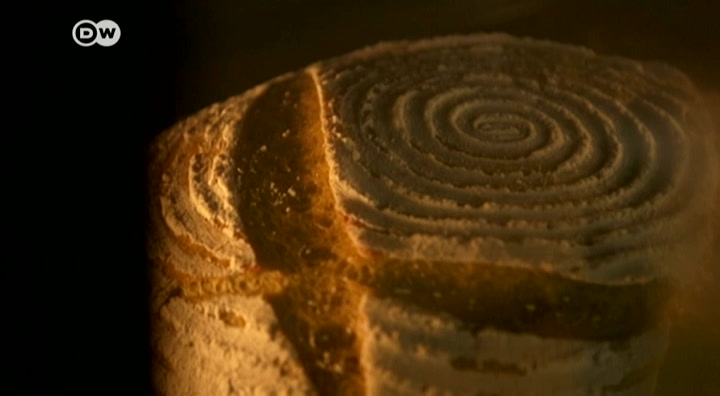 with this cornbread and a glass of red wine you can chase away even the most severe case of economic news. yes. he really does have a great job and the rest of his figure holds baking our facebook page at facebook dot com slash d.w. don't cha that's all for today thanks for watching a joint as again very soon. in .
7:58 am 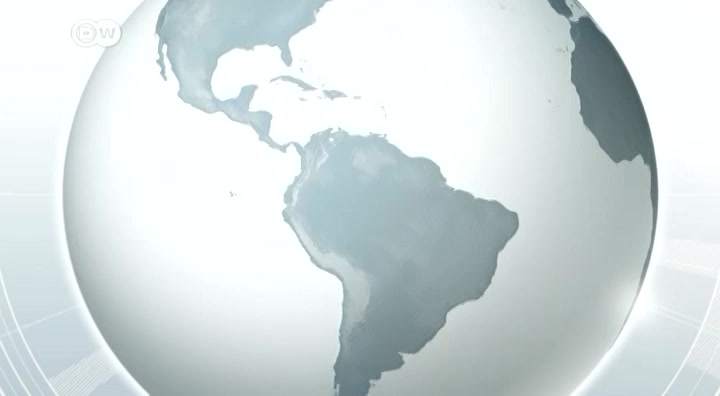 organized crime in the nursing profession. nurses from boss me are highly skilled so they have a good reputation throughout europe. but now all the nurses have been hit by a fraud scam. the fake nursing school diplomas are being sold on the black market and it's an. possible talk of forgeries from the real thing. thirty minutes w. . i . do not know how they will not succeed in dividing us so that i will not succeed in taking the people off the streets because we're tired of this dictatorship.
7:59 am 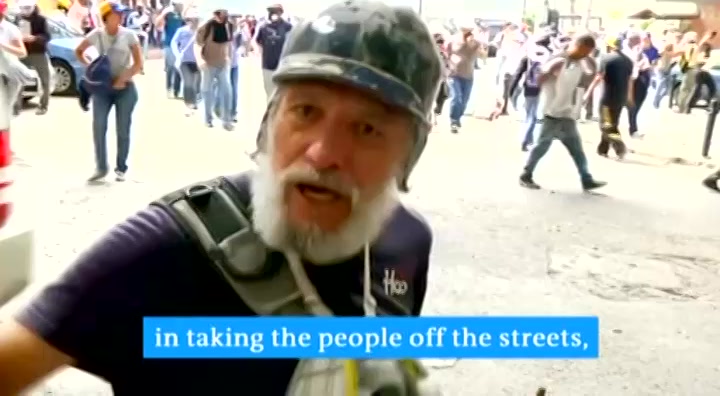 taking the stand globally was that matters. made for minds.
8:00 am 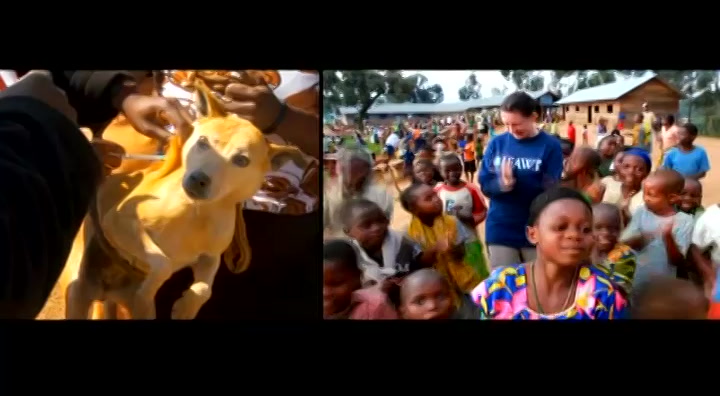 this is news live from berlin desperately needed food and supplies become a pawn in venezuela as political showdown president nicolas maduro orders a military barricade to block aid from crossing over the colombia border but self declared interim president calls for troops to defy it were.
left
right
disc Borrow a DVD of this show DVD
tv