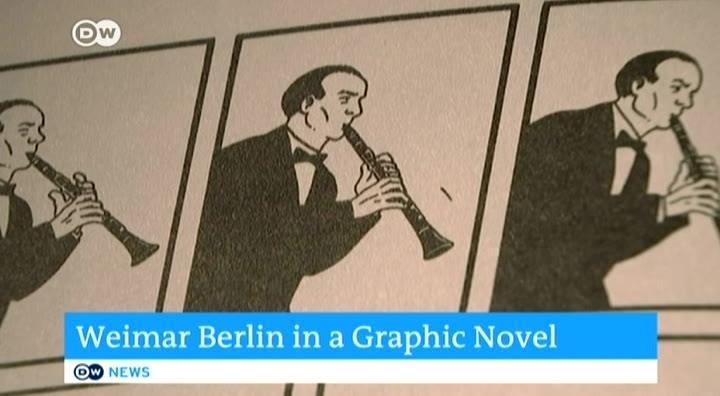 jason lutes the author of a popular graphic novel set in the fire era. but i'm going to begin with a quotation from the wall street journal from al jolson i'm a west a prince and the annals of popular entertainment are filled with the inevitable figures into their ranks with the germans saying. i'm quote he and his probably. big stars here in europe are making waves in america and elsewhere max rob is my guest in just a minute but first his music thanks. to our. very very. good morning to the other three. drama and the plaster cast record classic tunes of the one nine hundred twenty s. and thirty's as well as their own compositions which sound convincingly as if they
7:46 pm 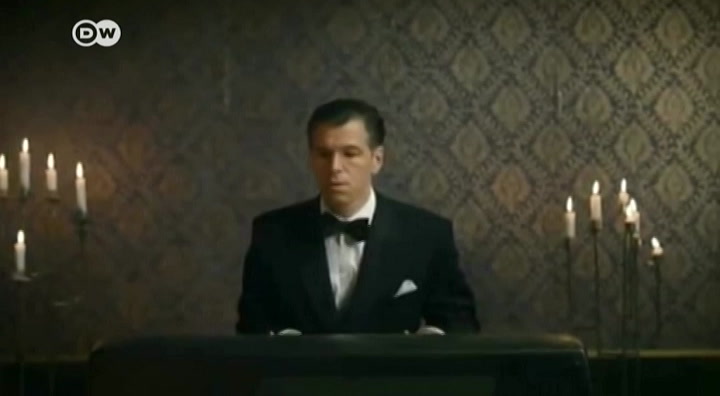 came from that era from then. you are going to. cause ironic and witty style has endured him to audiences both in germany and abroad. he's even made several appearances in films most recently and one about betto priced and a film version of his threepenny opera. with my. father. isn't living totally in the past on his last album from twenty seventeen he updated his style combining the spirit of early twentieth century music with a more contemporary sound in school. he's on this trying. my. dream enough i've.
7:47 pm 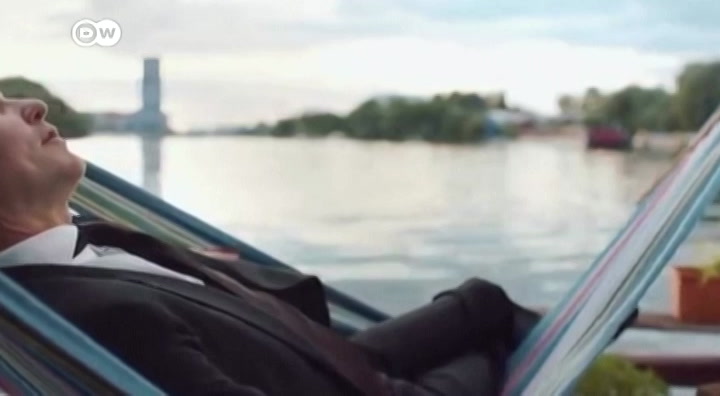 done to keep. and i'm joined by the man himself max roberts welcome to the show. the music you specialize in music from between the two was from the weimar republic the twenty's the teas long before you were bold and so what sparked your interest it was the human elegance of the compositions and the humor of the. i mean even the. especially the german songs of course but. it's a feeling like this song by called portia that if it's a speech you move from time to time on very funny and simple and this elegant orchestrations and that was the reason why i was interested since i was a voice saying to me was you want this thing to pop music as well as of course.
7:48 pm 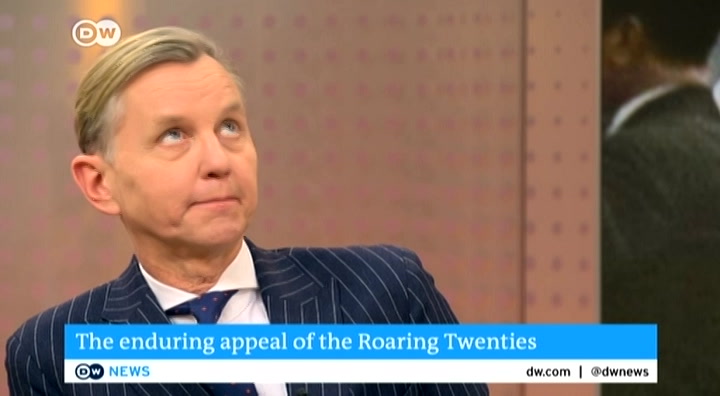 because we don't have my mom my brother had everything and i was completely familiar with the just what todd gamma ray off. the cuff the cuff eq. and you mentioned the underlying human now there's lots of humor when you perform as well does that also is that old taken from the twenty's or is not invented by you in the opus rosewall so when we play in germany of course we have the old these german songs and a few english songs but when we go out. in other countries for example in the united states we have half and half and the german songs. translated just with a few lines of folks often it's a song called. gate i say it comes love goes and everybody has a feeling to understand what's going on in the song even if it's a funny song about our own balkan in mind how it's find every women needs
7:49 pm 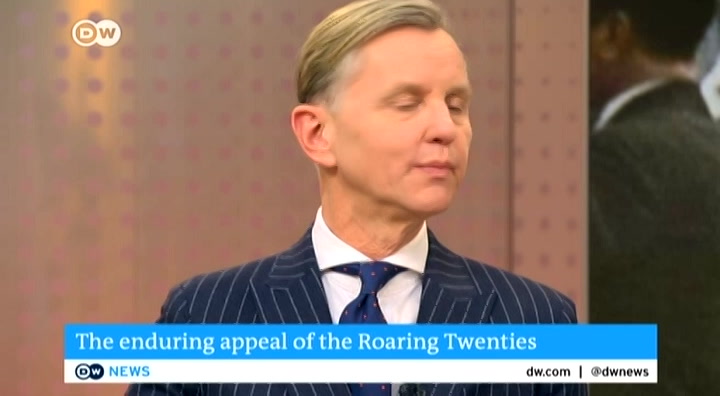 a friend or whatever so. where can we get together you and me for a kiss we just don't need your hoss bend so leave him where he is so and do it with that line you've got some point what's yes it's the whole song now we've been talking about the. culture all this week you actually appeared. in a big opening the big opening celebrating you know the festival director dieter caustic who's leaving there was a song that you sang with a famous german comedian. did you write that song a few years ago and we. did a bit of. caustic and words for him and lines for him and it was a pleasure to sing it because i'm getting a good answer to it because it's normally i sing it or alone ok well thank you for the moment but don't go away to the international film festival now and there are a lot of music documentaries being presented at the festival we've chosen three in
7:50 pm 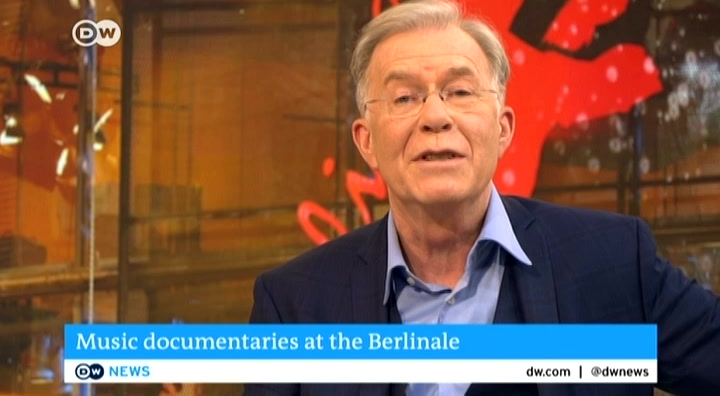 completely different styles starting with the queen of soul aretha franklin this is . sick and. these images have never been seen by the public before the queen of soul aretha franklin joining the recording of her album amazing grace it remains the top selling live gospel album of all time the film. amazing grace documents the making of this groundbreaking record in one thousand nine hundred seventy two aretha franklin records the songs together with the choir in a church in los angeles. what. was. originally the material was supposed to be used for a documentary but the project was abandoned and the footage sat on the shelf for
7:51 pm 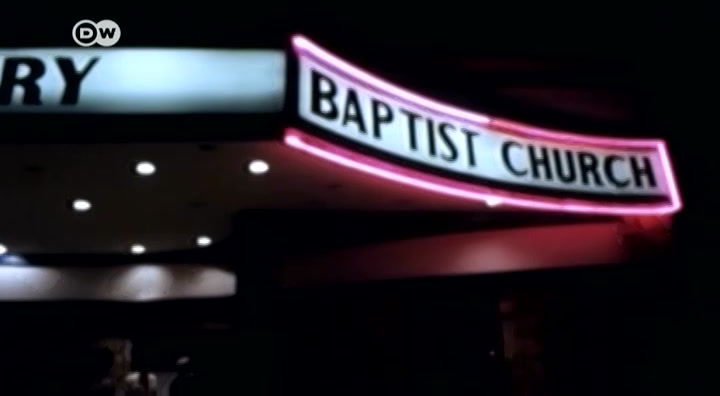 more than forty years until now amazing grace a tribute to the late queen of soul aretha franklin. another woman who was accompanied by cameras during the making of an album p.j. harvey on the road in kabul the british on the lookout for inspiration and material and this search takes her not only to the capital of afghanistan but also the usa and costs about. one hundred six demolition project hobbies knight studio album was released in twenty sixteen director seamus murphy documented the whole process in his film a dog called money. thank you certainly go up a notch when it comes to do tort and holes in the documentary bulgy new i'm mile lengths
7:52 pm 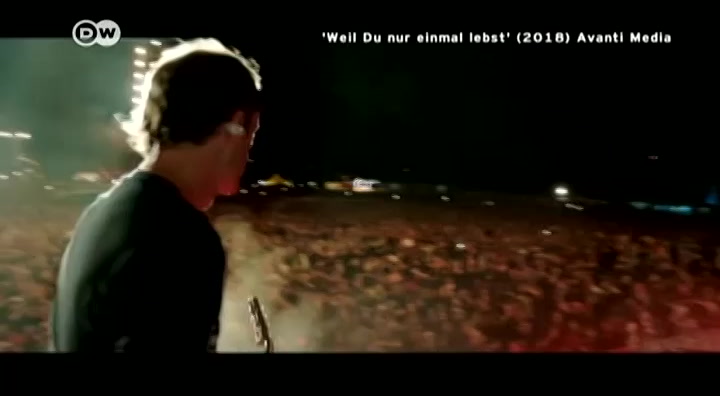 to you only live once shows the german punk rock is on to it in twenty eight change for a director portulaca it's forced follows the boys from dusseldorf all the way to watch and chain out one of the things the documentary explores in seeing a campaign zero seven hearing loss. oh i get it you always tell yourself that everything's fine and then suddenly something happens and it's all over the world. you only live once torn hose and on to a. celebrates its world premiere. my guest is max raju you know that the road you've been on tour a lot it's tough one to ask you as a singer because i know this can affect sing is do you get nervous do you get stage fright from time to time but very sound because you're on stage i should say for people that you're super cool. facade no i'm not i'm nervous like
7:53 pm 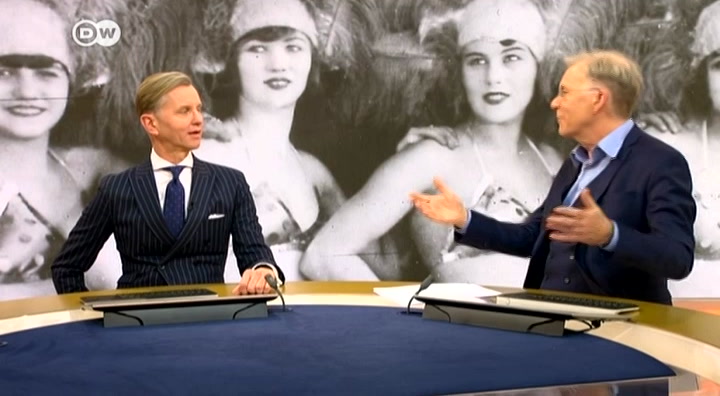 a horse. before start run but now at last it works and i have the whole band behind me so i know what i'm doing and at last. as well you know you talk about the music translating that but your announcements in germany things people do wait for it can be very funny in german then do they translate yes in a way yeah it's small it's not doesn't pens on the boats it's more the train of thoughts which so which is so strange and i speak about the songs. are not pretty but at last it could be an announcement to add to the song it's possible to the slave but i don't want to talk too much about this now. let's hear
7:54 pm 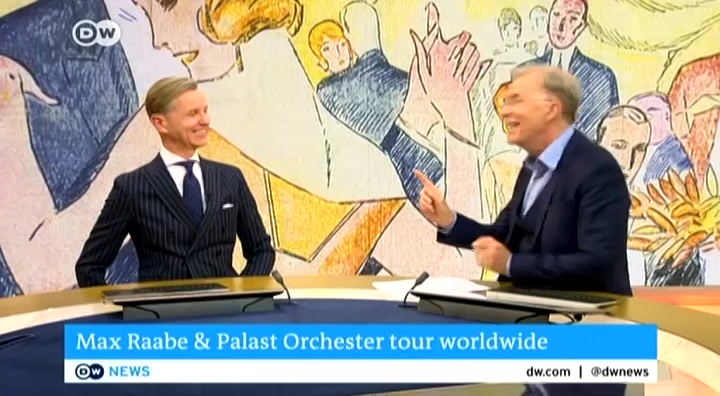 some more music from you from a song you wrote yourself called christian can manage to live and it would translate as. you call it has a lot. of it's i love it hello and you. know . you know. you know. i just. know it's a wonderful dog particularly like that song actually very much of course your main repertoire is that from the twenty's and sex and of course some great songs we're going to actually hear you sing in english a little later a classic from jerome kahn. would you have liked to have lived in the twenty's and
7:55 pm 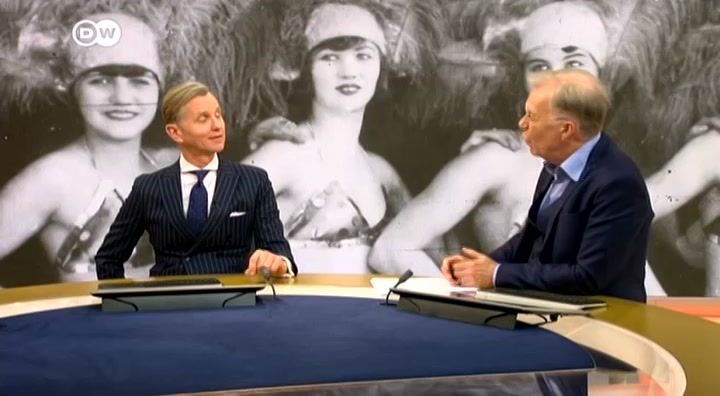 the early thirty's before that awful man came along this border. no i'm very happy to live our days and you know i have a central heating and i'm tired of bringing up the old coal in the fourth floor so i'm very happy with with living today and have warm water whenever i want just i'm taking bath. for the moment thank you that is just a nostalgia boom from the twenty's and thirty's at the moment currently the huge t.v. series babylon berlin is a good example loud american graphic novelist jason lutes has been making comic books about era for over two decades in small. the roaring twenty's or rather just before their end the city of bell in stands on the edge of the abyss insights into the time leading up to hitler's seizure of power in the
7:56 pm 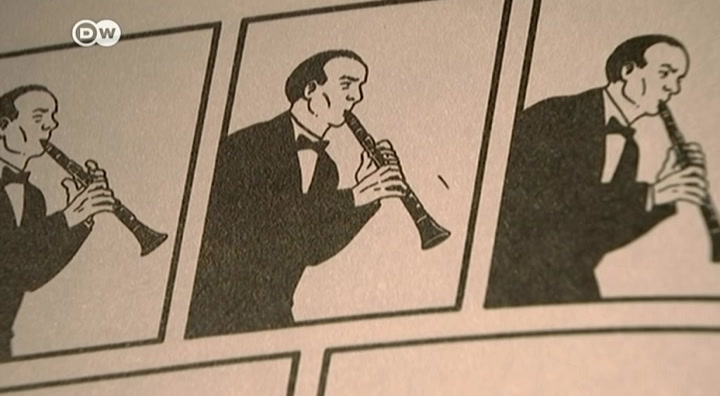 weimar republic a place in flux where anything goes. the american graphic novel artist jason lutes has long been fascinated by this time he started working on his six hundred page comic twenty two years ago. this period is back in the consciousness the collective consciousness of of western civilization because of all the similarities a lot of the same forces are now in resurgence populism nationalism. in my country and all over the world. eludes creates an image of a city an image of a time his figures a based on real people observing them in their everyday lives so the reader might just get a feel for what life was like back then. you're off to america on soul to seattle on march eleventh san francisco on the twelfth
7:57 pm 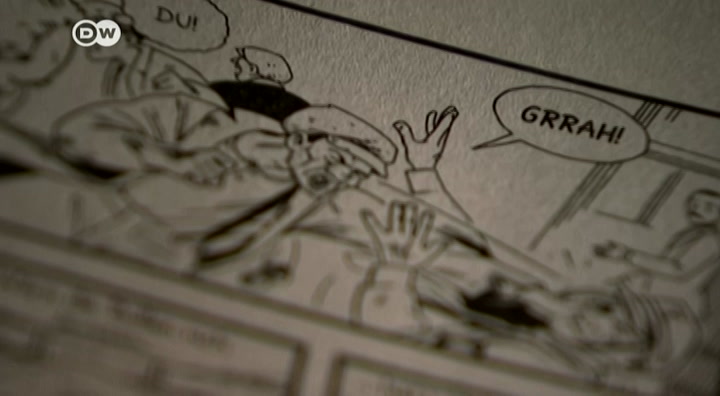 a lot more on our website. with the whole issue of course we're going to leave you with a little bit more jerome kern i was dance marks robert thank you very much for being with us. don't ask me. quadriga international talk show four journalists discuss the topic of the week
7:58 pm 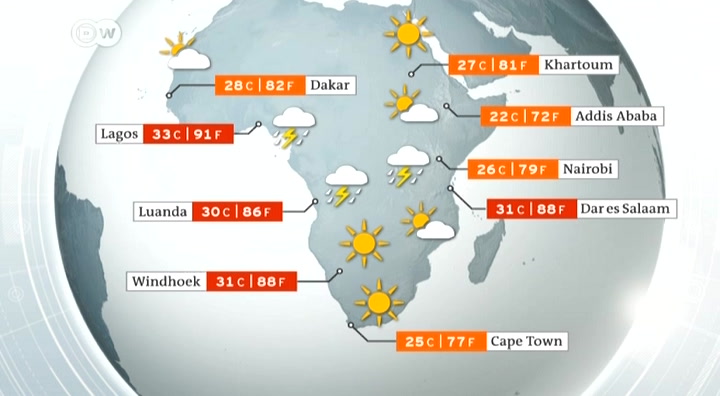 next week the vatican will host a conference on sexual abuse by clerics pope francis is trying to restore faith in his sacred institution can he do it join me as we discuss the catholic church's darkest secret one hundred. quadriga thirty minutes w. . torah . says the god hundred german streets on d. double. take her similarly i already with all the wonderful people understand that make the game so special. for all true fans god was financed by. the god more than
7:59 pm 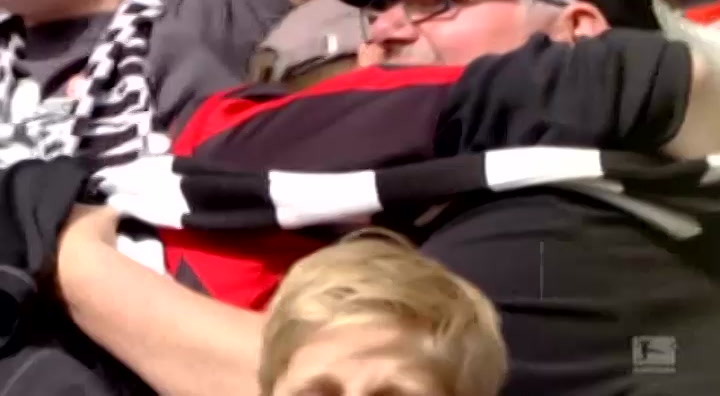 football online once upon a time there was a young girl. with a burning ambition. to become a conductor. i was a very curious child and very excited and in love with music and i would go to concerts with my parents and always. near him for being on stage with the musicians and being part of that magic was a difficult the first. real. world famous conductor eleven of the nine eleven. did you marry a t r d w.
8:00 pm 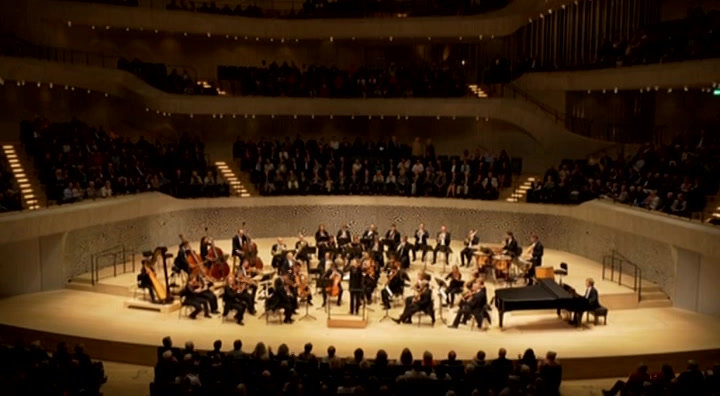 play. business news live from for lent a year after the u.s. my shooting that mobilized young people on gun control when school students in florida hold a moment of silence to remember the seventeen victims that were joined by hundreds of thousands of cross the country we find out what's happening since also come aboard. another day on the path to britain's exit from the european union another tough to feed.
left
right
email Borrow Program
tv