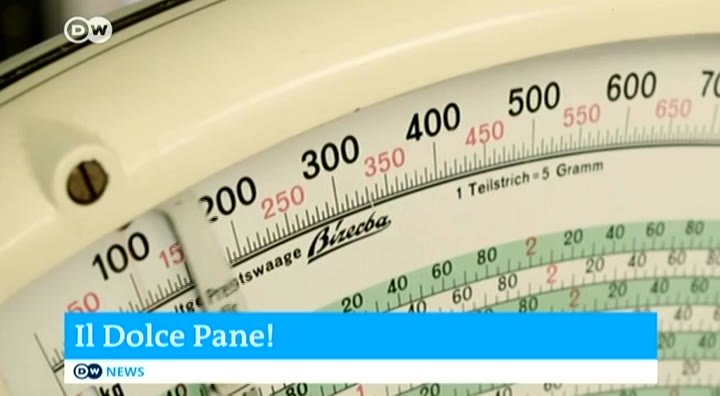 and we're off to italy where a delicious because your recipe or give you a taste of a bell pay is a beautiful country. but first it's a very special year for the netherlands two thousand and nineteen is rembrandt's year marking the three hundred fiftieth anniversary of the great touch painters death and amsterdam's rights museum is pulling out all the stops for the artist whose prolific seventeenth century self portraits some say laid the groundwork for what we see today on social media. selfie with rembrandt the old master of self portraits tourists are paying almost to an artist they see as something of a role model i've been to his house and museum and i've seen that in many of his paintings you can see himself in the back and it's very funny because he was kind of the inventor of selfies. this is a nice memory of
12:46 am 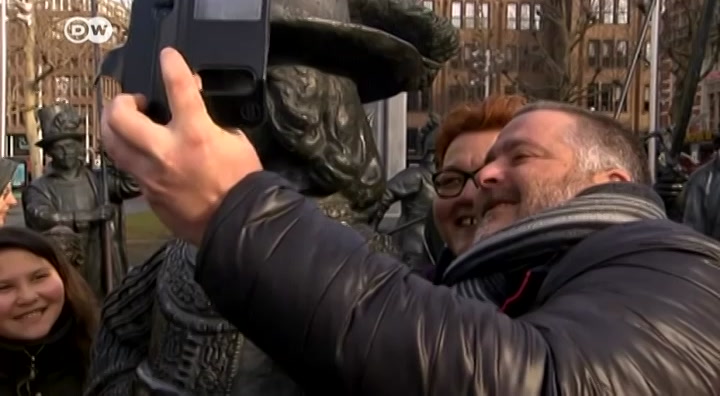 a holiday family together with a great artist behind us. i think i have to thank him. my instagram page actually because these everything is spotted by him apparently for the first time ever all the rocks museums rembrandt's on show at the same time almost four hundred works by the self-portrait superstar rembrandt's humble beginnings as a young artist he mostly painted himself he was after all the easiest model to get at the early stages of his korea klein the studio in small sketches for which he pulls all sorts of she faces so it's great that an artist learns like this asking how can i do that depicting emotions. there are more than eighty self portraits with broad noses and wild curls rembrandt was obsessed with detail he presented himself unadorned at all ages he didn't censor unlike the selfie generation which
12:47 am 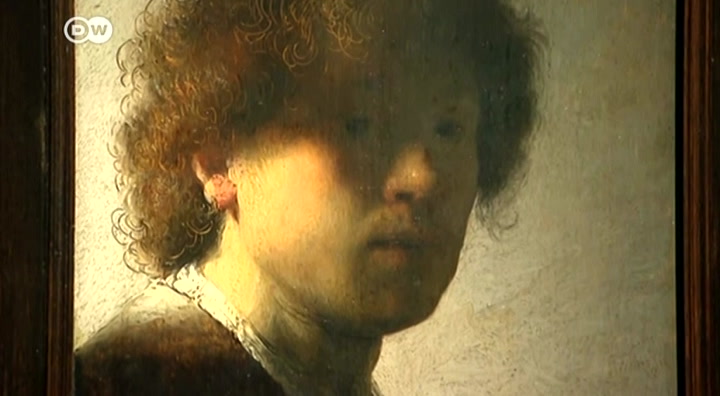 is not averse to concealing blemishes behind flattering filters. rembrandt became adept at expressively capturing emotions his paintings are dynamic records movement and situations as here in one of his most famous works the night watch he especially depicts the play of light and shade. on the clue he also dollars according to where the light falls he uses only white yellow. very bright tones from there the colors become darker and darker red and then brown this use of color intensifies the light's effect. even here he smuggled himself into the picture today the self-portrait master would have it all too easy but would rembrandt really just reach for his mobile phone to immortalize himself. now
12:48 am 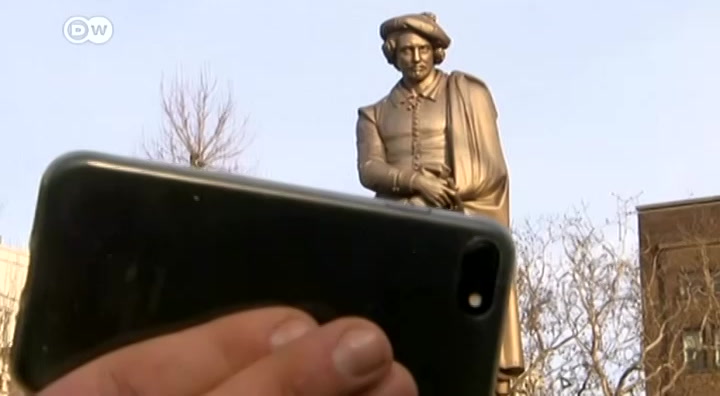 a little heads up starting this july rembrandt's painting the night watch is getting a full restoration and you can watch it happen either at the rights museum or you can catch the whole restoration process live on their website now here in berlin a very different exhibition is on display it's about desire sexual desire it's about the female body as a tool in advertising. women. the women are so beautiful that's what you want curation. to take a critical view of harvey image of women in advertising has changed over the decades. been used to introduce products and in fact it still works back when most women were housewives they were in charge of
12:49 am 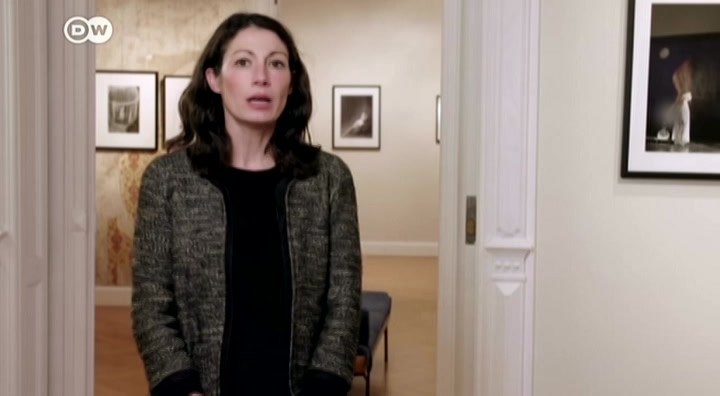 buying products whether they were intended for them or for men. on the day we live in a sexualized society and we have lots of six in the movies and music you know not just in advertising. so our ideas of beauty i linked to images of women and height is. made a difference as. we see how advertisers have off to the sex factor over time to grab customers attention. it's supposed to be a bit provocative to catch iran otherwise it'd be boring canadian photographer michelle perez is best known for his sexy sensual launcher a adverts. what is sexy is a really fine line you know between going overboard and really.
12:50 am 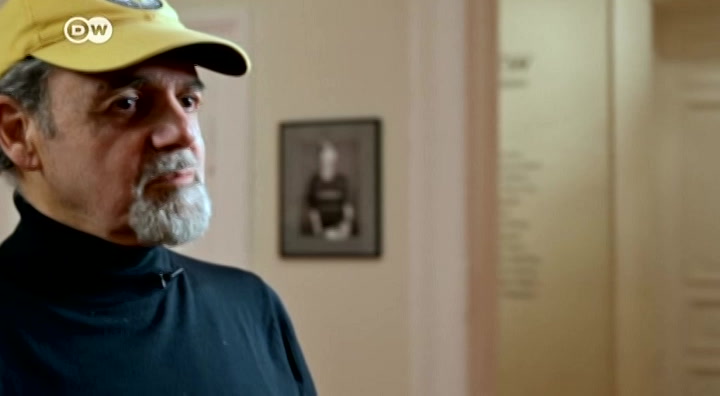 you know within the parameters of good taste but i have my own view of women and trying all my life to truly put forth that new which is you know to not abuse women to really respect them. across the board respect has never been the main focus. is supermodels of the nineteen ninety's did command a certain level of respect there unmistakable faces and lean figures became a seal of approval for whatever product fay touched most of the one hundred sixty five shows in advertising posters in the exhibition in berlin one made by men in this field women artists are still the rare exception. now my colleague melissa holroyd is just back from that show one thing that just struck me it watching that report as this exhibition is billed as being critical of representations of women
12:51 am 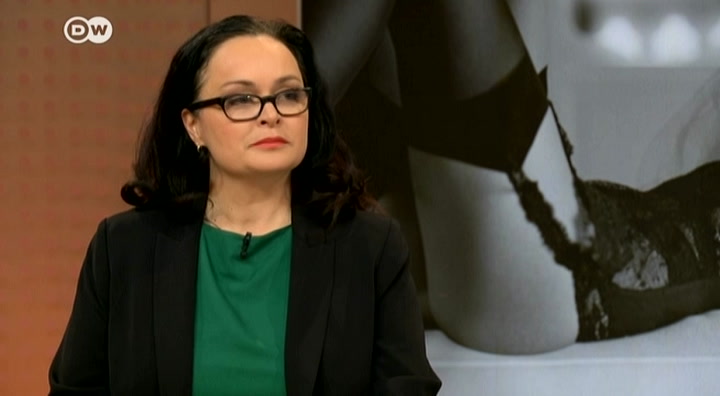 the visitors we talk to actually have positive things to say about these images what do you make about. well i'm not surprised that had positive things to say these images or images that everybody knows we see these images everywhere and they are the norm what you do get to see in this exhibition is you get to become aware of the trends that exist a lot of the women of faceless a lot of them you just see different body parts for me in this exhibition i felt like there was an element of criticism that was missing in the room because we know this stuff so well now this exhibition does cover several decades in that time span the history of advertising who are these images of women targeting are they more for the male gays are they more targeting women i have to say that probably targeting both the exhibition shows how women's images for example were used as a distraction from the horrors of the second world war these ones here by german
12:52 am 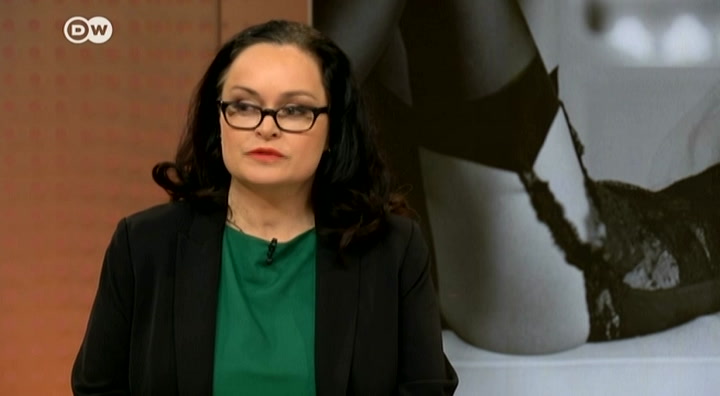 american fashion photographer horst p. horse after the war the u.s. helped reconstruct twist germany and that also meant spreading american products including the pinup the women would see these ads first in magazines but because they need to get the money from their husbands the ads have to appeal to both because they have to grow they have to take these ads to their husband and say oh by me oh well things have changed a lot haven't they now let's fast forward just a little one major shift that's also covered in this exhibition is the sexual revolution that started in the one nine hundred sixty s. how does that play out in that. it had a massive influence the sexual revolution source six moving into the public sphere and the world of advertising really leapt at the opportunity. we're going to have a look at some pieces here here we have a piece from oh we should be we have a piece by frank over the telly for the yves saint laurent from one nine hundred
12:53 am 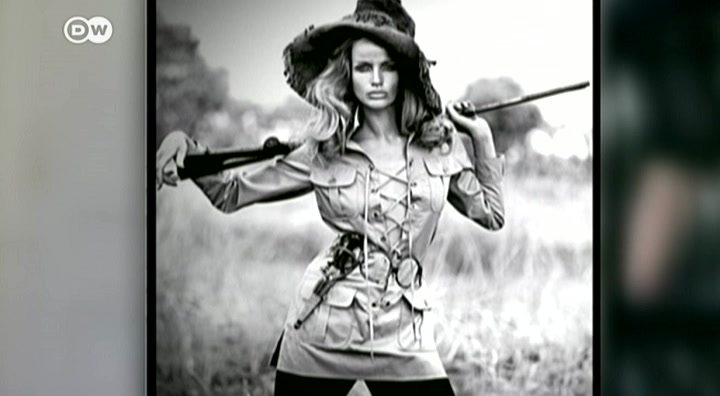 sixty s. this is a very cool to adventure. and here we have a person add the woman is in a submissive position but the beach and the sun are also symbols of freedom but of course to be remembered the most important thing is you have to be remembered you have to be remembered and to do that you have to shock people a little bit more so horrid we could talk about this all day thank you so much for your insights thank you know what you eat. so a lot about who you are here in europe people eat a lot of bread and as d.w. as europe correspondent can tell you it comes in all shapes and sizes each week combines his loves of baking and politics taking us to a different country in the european union today we're off to italy barely might be equally pret friends ok great philosopher once that showed me a nation's no and i will show you. now here's
12:54 am 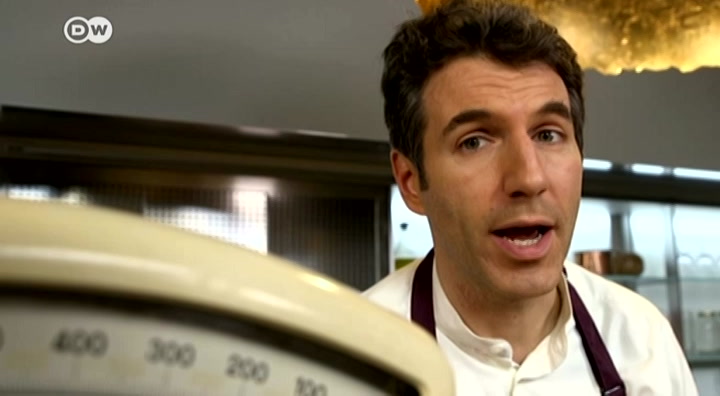 a four catches italy has had sixty five different governments since the end of the second world war. italian governments are like kucha they go stale most of a lot are very fast so always bake fresh. all you need for four culture is water plain flour salt east olive oil tomatoes and rosemary to be authentic you need to use a very fine kind of flour label to zero zero grain dissolved fresh yeast in warm water at the plain flour and salt mix it all together now grease a mixing bowl using of course each value in order for oil the best you can find why because your bread should be in a league of its own cheap oil it's look like it will give you what you need just
12:55 am 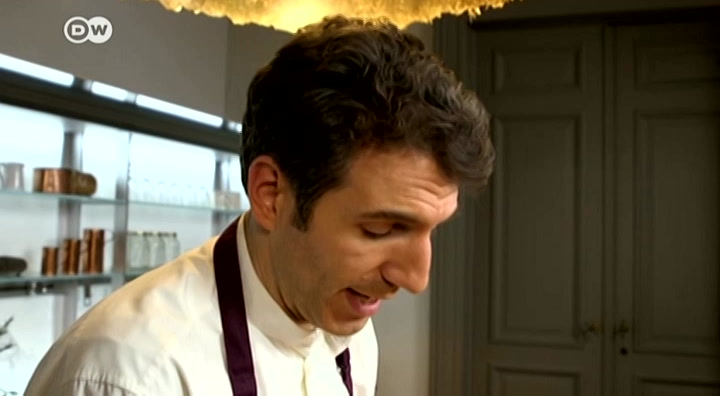 like italy's populist politicians. but they made lots of free radicals when heat this saturated fact. let the door rest for four hours folding it wants power. it needs to puff up just like the eagles italy's full time prime minister. silvio berlusconi must rise and fall. no sex no financial scandal ever stopped him from making yet another comeback place the dough gently a live baking sheet lined with parchment paper and leave for another ten minutes time to press out the dough with your fingertips so wash your hands clean hands were also important in the early one nine hundred ninety s. when judges expose the kickbacks and bribery that fueled italy's national politics
12:56 am 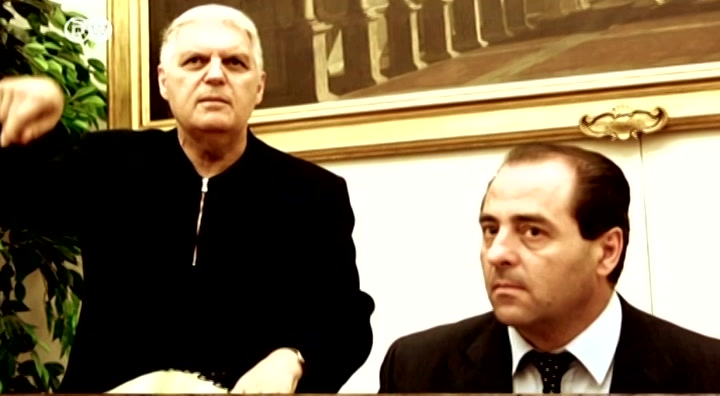 the so-called clean hands operation squash corruption. the right toppings for. keep it simple tomatoes and rosemary for cutter has always been the food of the common people. they catch two hundred forty degree celsius for around twenty minutes then remove from the often not be you that is. i know there are high levels of skepticism but there's no need to fear and intellects. even italy's populace don't want to leave the club they know when something sounds hollow. and that's what you'll hear when you tap the bottom of your perfectly baked for culture.
12:57 am 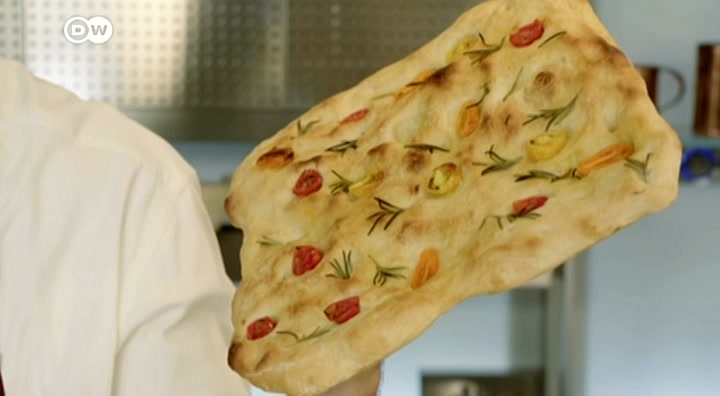 savory bread unsavory politics that's all we've got time for today if you're still hungry for more culture news though you can check out our website at www dot com slash culture now for me and all of us here in berlin thanks for joining us see you again soon.
12:58 am 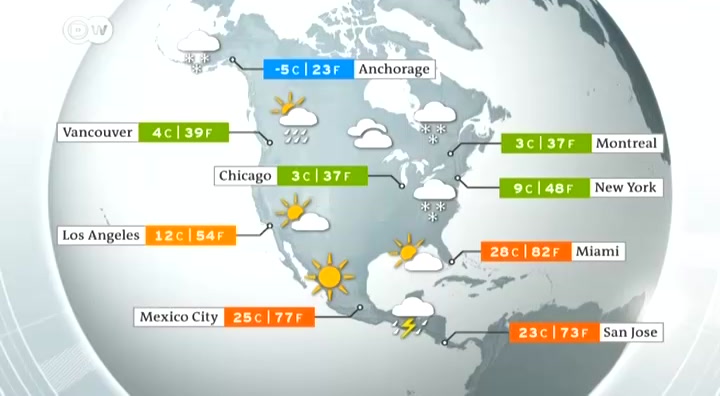 enter the conflict zone confronting the powerful. this week comfort zone is a b. and you'll security conference in munich because. of my guest here is jim risch chairman of the powerful senate foreign relations committee come damage against this transatlantic demise and how committee is the trumpet ministrations tonight so complex so feel. one hundred million tons of sound cause a mistake everything is cut back with deadly consequences. just storms may come of global menace. once they start there's no stopping
12:59 am 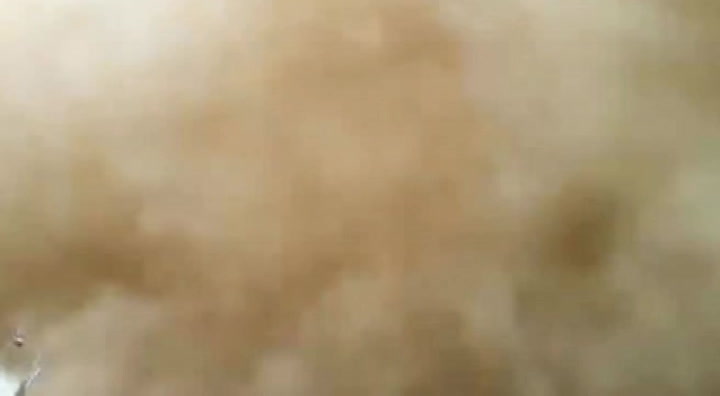 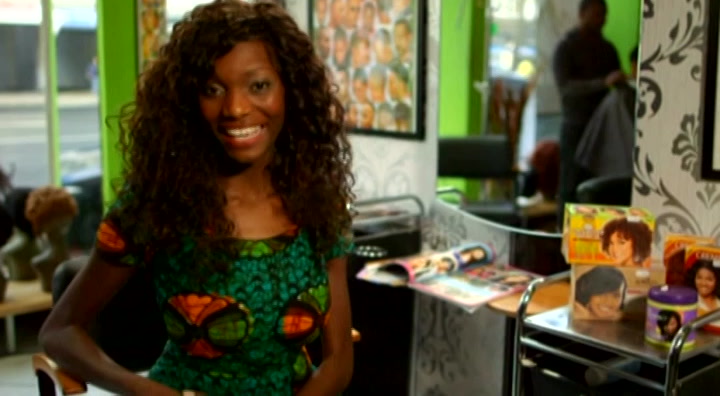 a day. that's a lot of time that needs to be filled so people at the salon talk about what's happening in their lives. i became a journalist to be a storyteller and i always want to find those real authentic stories from everyday people who have something to share. with all the time i spent at the salon i had no good quality here when i see ads and a good story when i hear it. my name is elizabeth and i work at. a russian president vladimir putin has threatened to target the u.s. and its allies if washington decides to place missiles in countries neighboring russia putin made the comments during his state of the nation address his threat comes after the u.s. announced plans to pull out of a landmark arms control pact earlier this month. following
1:01 am