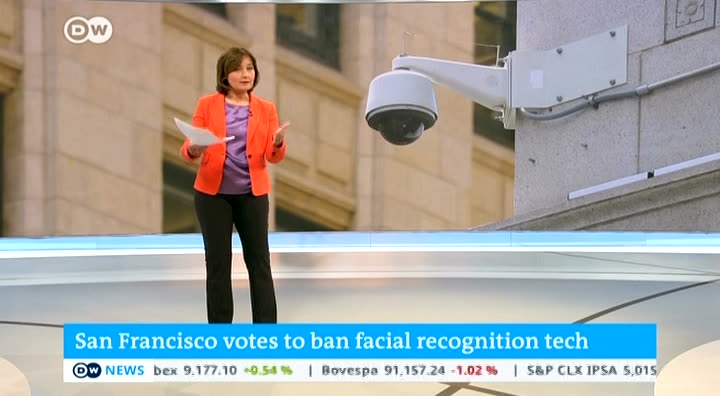 ripples around the world certainly was security is concerned san francisco is banning facial recognition technology once signed into law it will be the 1st american city to make it illegal for local government agencies to obtain retain access or use the surveillance. send francisco home to many of the world's tech manias is blazing a new path. it's restricting the use of facial recognition technology by the local government. it's psychologically unhealthy when people know they're being watching every aspect of the public realm out on the streets in parks that's not the kind of city i will ever give this as the difference whether the technology can still be used by the u.s. federal government and private businesses in san francisco in the rapidly evolving facial recognition technology is already in use the world over at airports on social media at sporting events and even in smartphones. big players like amazon
6:46 pm 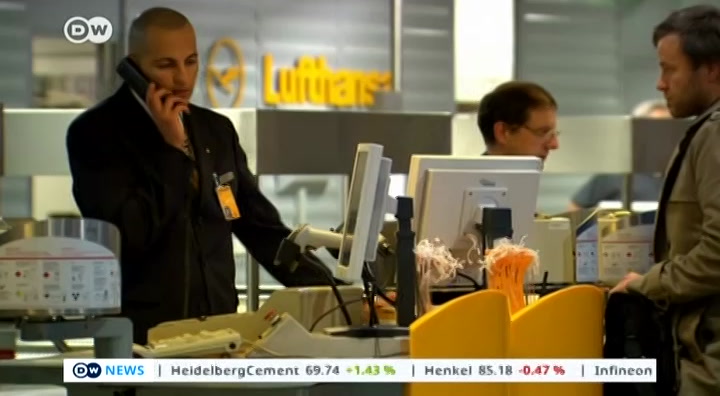 facebook and i.b.m. make billions helping both private companies and governments utilize their software the $4000000000.00 industry is expected to quadruple in size over the next decade. here in berlin the german government has started experimenting with the technology of public train stations after a terror attack at a christmas market in 2016. and companies maintain they show recognition software can improve consumers' lives like at this market in china where cameras automatically identify consumers and charge purchases to their account. thank you jack how is it critics of the technology say china's extensive use of facial identification software should serve as a cautionary tale. the country's camera surveillance systems tracked millions of its citizens automatically. the government has even outfitted taxis with cameras that automatically identify passengers and log their trips in
6:47 pm 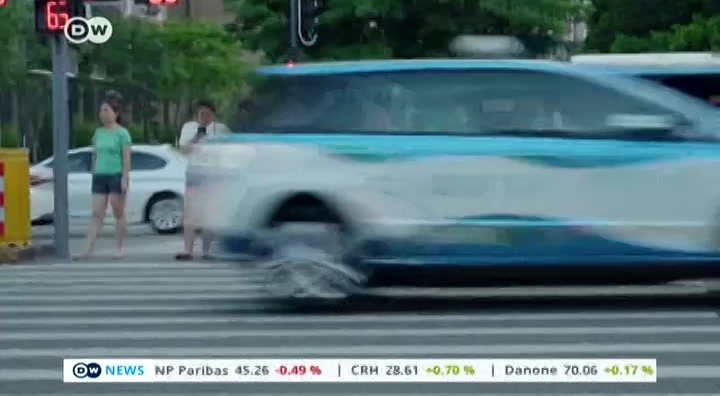 a central register officially it's to improve consumer safety however critics warn such uses are an invitation to government abuse still as we just saw there this kind of technology does appear to be here to stay authorities around the world have been adopting it including in india where plans are underway to introduce facial recognition at the bangalore international airport the biometric technology will identify passengers as they move across the airport removing the need to present boarding passes and passports multiple times so quite practical but what do indians make of it well let's bring in a giant p.k. co-founder at fact a daily in bangalore good to have you with us so face all recognition as we've heard now several times is quite controversial what do indians think about it. yes so it's largely controversial and you will see that indians like technology as
6:48 pm 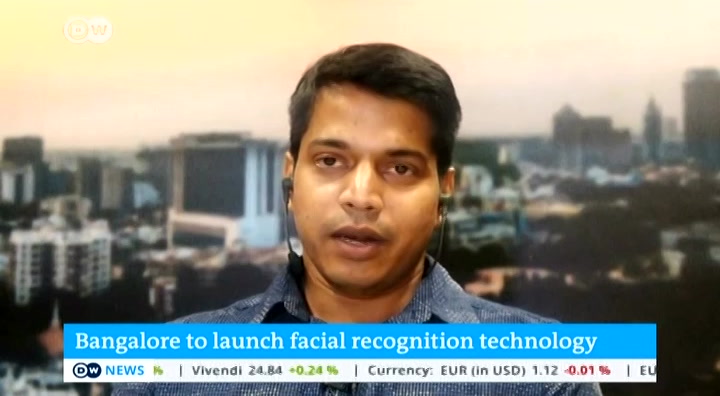 long as it makes their life easier for example you see india has the largest biometric database all of 1000000000 people in rolled in that database over the last 5 to 6 years now if it makes their lives easier they are likely to adopt it however there are huge concerns around privacy data security and information protection which will be called out in the days to come so in if you look at bangalore which is a really busy airport you have a lot of software professionals coming in and out of the city and these users are really are aware of what's happening around them and privacy is a huge concern for them india doesn't have a data protection law as yet saw there likely protests that what is going to have happen to my data am i going to be singled out am i going to be racially profiled there are many questions around this this technology saw we're likely to see a lot of protests in the days to come but also the fact that you know india is not
6:49 pm 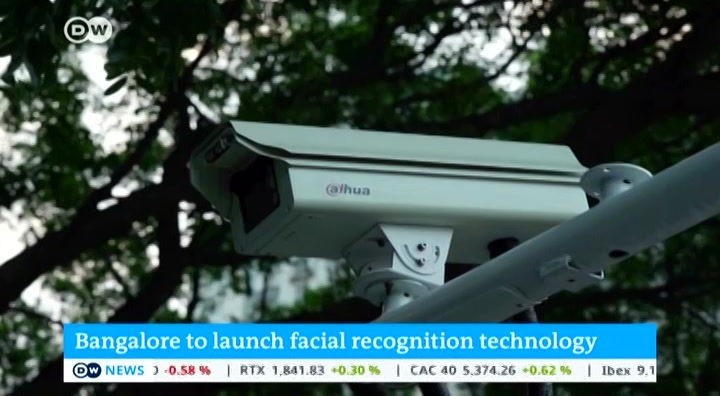 averse to using technology for if it makes their life simple so suddenly bangalore it'll sort of trigger a whole raft perhaps of new measures also in terms of data protection do you think it will also kick off a facial recognition technology across india in all sorts of different places not just airports. so we do have many instances of facial recognition technology being piloted across the country for example you know many police. institutions or law and order of institutions across the country in different cities have used our camera technology to identify criminals or even you know to identify lost and missing children and there have been it has been put to good use but most of the times it's been the data or the face of the place that is quoted against a very specific limited database of criminal. database and
6:50 pm 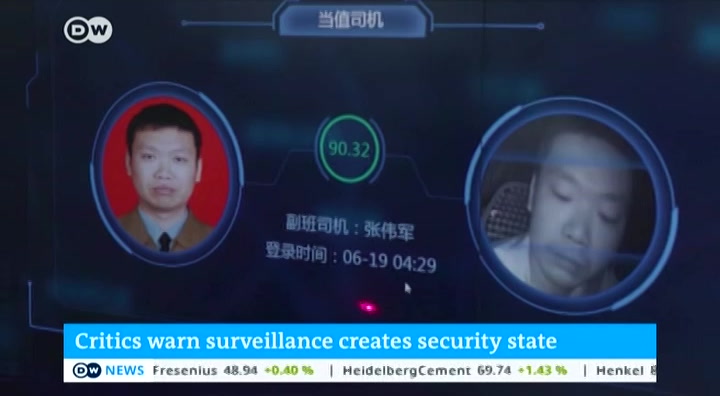 that's not so bad as long as you know there are safety and there is there are laws around safety and privacy there have been instances where thousands of kids are children who have been lost. in crowded places who have been found you know and returned to their parents in cities like delhi where facial recognition has been put to good use ok p.k. there co-founder of fact a daily in bangalore thank you so much. now the trade dispute between the united states and china has been playing out for well over a year now and the chances of a resolution appear to shift dramatically from one day to the next among those who have found themselves on the fault line of the conflict a story being pharmacy in ohio. if you've ever wondered how the trade spat between
6:51 pm 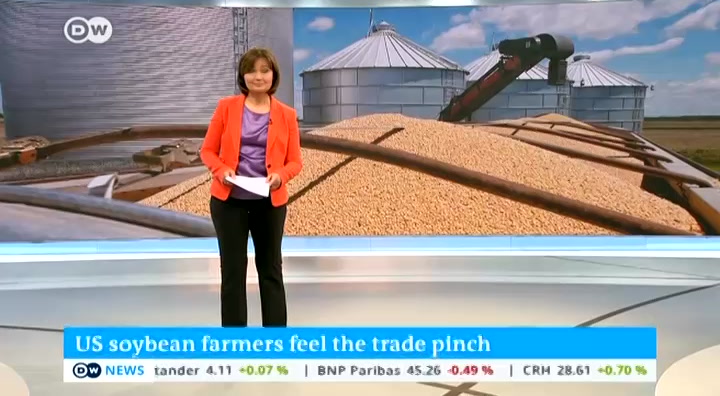 the world's top 2 economies is playing out on the ground look no further then rural ohio. soybean farmer brad davis used to sell a furry defense project to china but a 25 percent tariff imposed by paging is crippling his business. compared to or year ago. we're looking at. $3.00 or a bushel so on that. $14000.00 morsels of beans that we have. that be almost a $45000.00 loss earlier this week the price of soybean futures sunk to an 11 year low of confidence that a deal could be struck deterioration the lower mood was largely prompted by the united states and china imposing a fresh set of tariffs on each other a move that left business owners in both countries feeling confused. and the world
6:52 pm 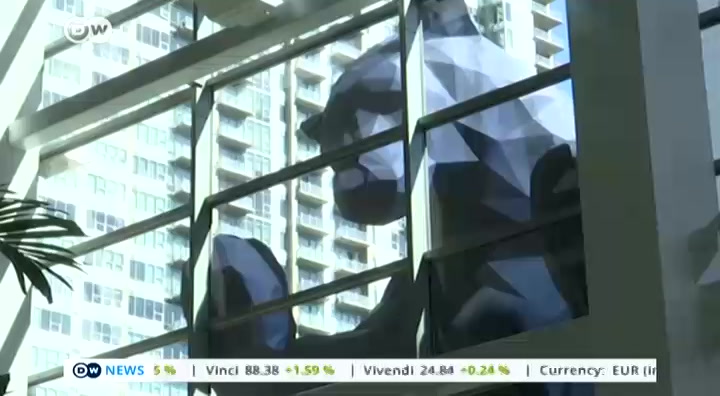 trade center has helped us here in denver and we get calls every day ranging from you know what's the new terror of today we're since yesterday and how can i mitigate we've increased or so we have been helping companies rework their supply chain understanding regulations both here in the u.s. and also in the country there. but a lot of people are really concerned no one more so than soybean grower brett davis who's continued livelihood could depend on an agreement between washington and beijing. while germany has managed to dodge recession despite all the trade uncertainty official figures show that the economy expanding its founding by point 4 percent in the 1st quarter driving factors domestic consumption and a boom in the construction sector while the trade war and to breaks it up and putting the brakes on further growth the german government and leading economic institutes recently scaled back their growth forecasts for the year as
6:53 pm 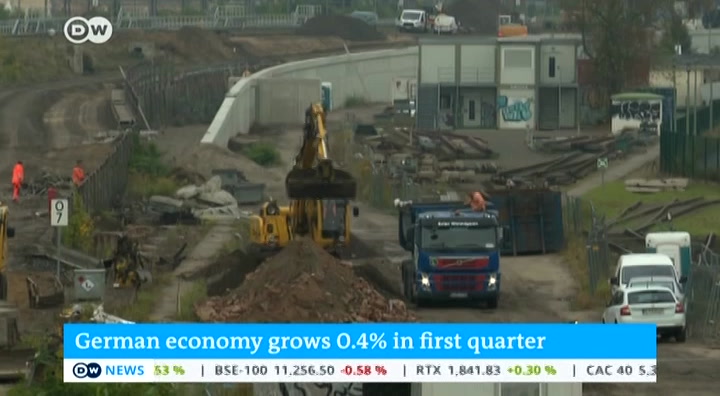 a whole. but europe strongest economy is still growing if only a little bit let's bring in our shores funday of the frankfurt stock exchange as she does has the latest data gone down in the financial world. monica there is a sense of cautious optimism optimism because the numbers finally have thrown out of the vindu any concerns about long long term economic slowdown but this question this because there are concerns about the u.s. china trade war escalating and that is not good for germany because germany is both the u.s. and china are key markets for german exports also there is the specter of for tariffs on auto imports of from auto imports from europe to the the auto explore sorry to the u.s. so there are concerns of that it's on that and that's again
6:54 pm 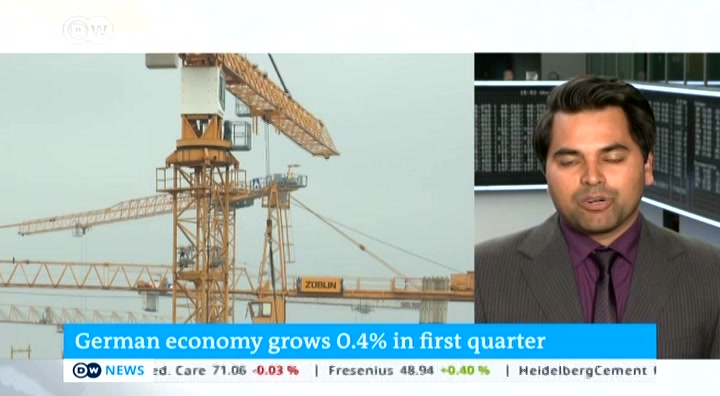 a hugely problematic for germany germany's a huge exporter of automobiles and it's a console in the 70 percent of the. imports to the u.s. right from the euro zone i mean of course we've seen in recent years that to germany always managed to weather the storm some how would you say it's still a safe investment. well there are certainly encouraging signs the unemployment is at record lows the wages growing and that augurs well for the domestic consumption the domestic economy is strong as you just mentioned but there is a major caveat and that is how president trump and president xi jinping of china are going to act in the next few weeks because that's going to determine german the head of the german economy ok i should touch monday there in frankfurt thank you so much. well it is a sad fact that coral is dying the world over climate change destruction by
6:55 pm 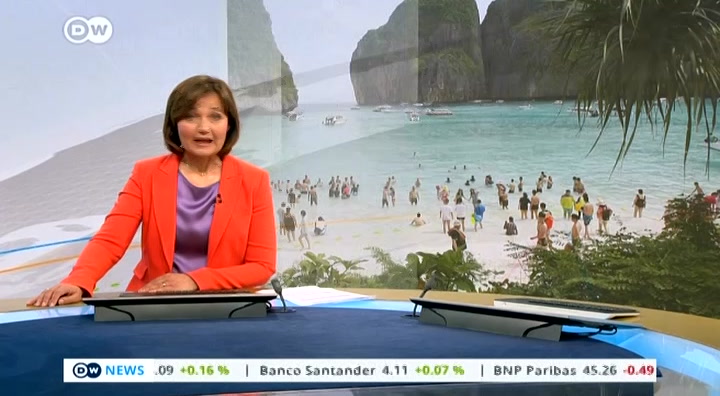 carelessly most and yes even the sunscreen many tourists love of themselves with a killing coral at an alarming rate to preserve what's also a major tourist attraction and source of income for locals thailand keeps one of its most popular beaches closed for 2 more years to help it recover. with crystal clear water temperatures it's not hard to see. most popular beaches but the $2500000.00 tourists which visit it shores each year have taken a major toll on fish and native to the bay killing much of the reef and the local ecosystem and that depends on it. no the thai government has closed the bay for 2 years to clean the beach well local marine biologists work to restore the damaged ecosystem. and that closure is also taking its toll on locals who depend on tourist dollars to feed their families.
6:56 pm 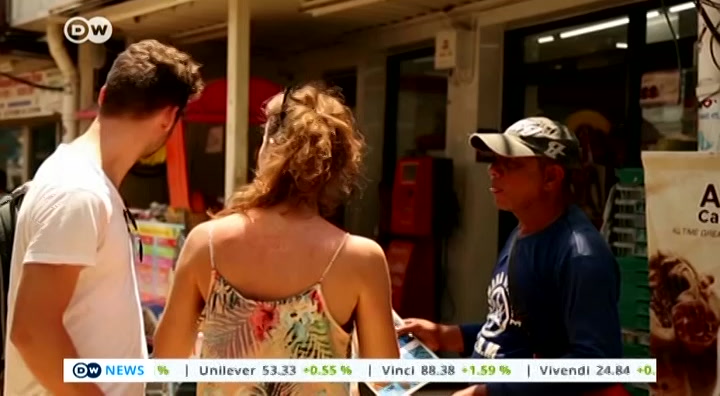 it's really affected us in sea island is closed down maya bay is the heart and stomach of us all. the island needs to close down for rejuvenation in like course it's affected my income i would like my a bit to reopen so that our boat service communities can resume their work and earn again my boiled up when my m.b.a. is reopened the trash may be gone but it will likely take decades for the ecosystem to recover. business asia thanks from me and the team and belin.
6:57 pm 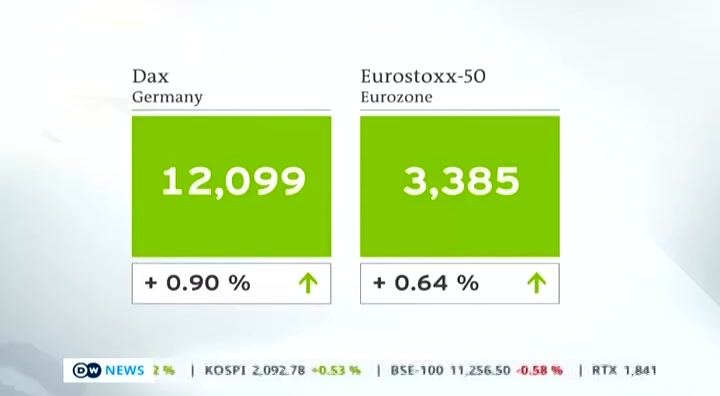 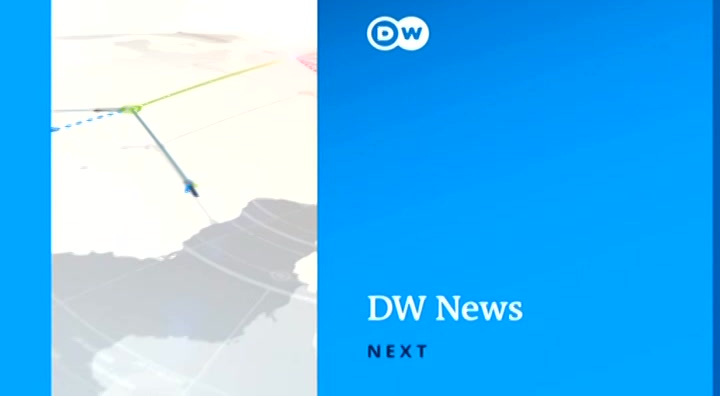 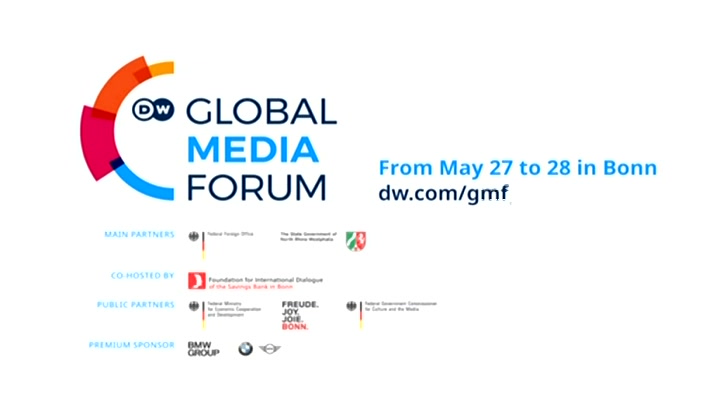 where i come from but all of that to get to cisco just like this chinese food does measure of where i am as a risk reminds me of home after decades of living in germany chinese food is one of the things i miss the most but that taking a step back i see something new to a difference with knowledge plenty of fluids 1st as an articulation that exists to other parts of the law which haven't been an immense as in china that's me if i'm not to china it's people wondering if they're going to say that most of the people have the right to another close and that is this is their job just under the law how i see it and others why i am not up to my job because i tired to do it exactly it is a great day my name of the uninsured and i work at d w. 2
7:00 pm 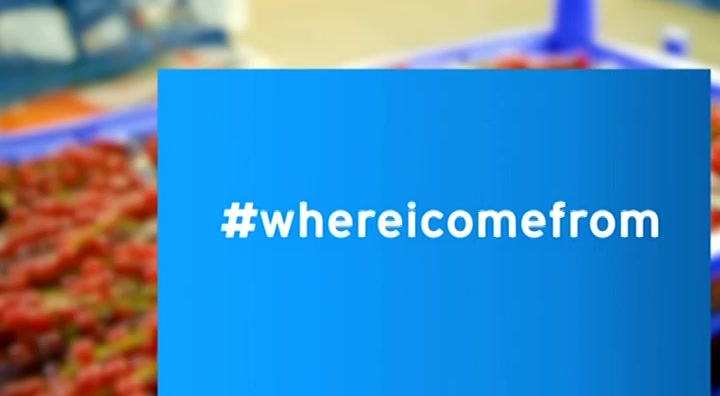 a to. load the to. play. this is the wor from dublin the fury i asked. most restrictive. because your state of alabama have been protesting against new legislation that criminalizes of almost all circumstances does that make they want to overturn limits reproductive rights across the country we'll hear from one of the bill's supporters also on the program. the opposition to agree. to democracy.
left
right
disc Borrow a DVD of this show DVD
tv