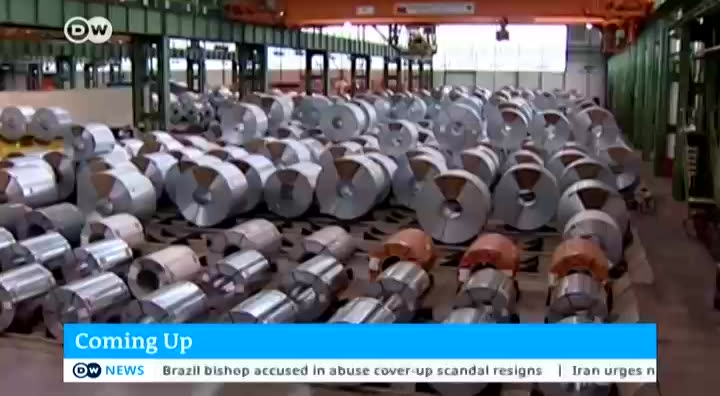 thanks very much for. well the german government is to pay out compensation to victims of a former german sect in chile the notorious colonia dignidad was founded in 1961 by paul shaffer the cult leaders collaborated with the chilean military dictatorship and for decades they forced labor and child abuse into common place practice it wasn't until 2016 germany admitted to failing to protect the victims. many of those who lived in the colonia dignidad are now old age and trauma have taken their toll but their efforts have played a key role in germany's decision to pay reparations to the colonies victims it was not an easy task in the bundestag the stakes were high each affected person will receive up to $10000.00 euros. it's scandalous that we're still talking about this and 2019. because so many of them
11:16 pm

are still traumatized and have no means to live. the shoot the guilty to the lies with the military dictatorship and the paedophile sadist polish a fuss about what he was already wanted to hear from the station and rape and the german state chose to look the other way. after schaefer fled germany he founded the colonia dignidad in rural chile he claimed to be running a god fearing community but it was in fact a dictatorial regime he isolated members from the outside world using them as forced labor torture and child abuse were common one former member for had different children brought to him every evening the colony was also used as a torture center by the military dictatorship secret service. to god i don't expect for the victims to have the feeling that everything is now all right that can never happen after the terrible lives they fled the torture well
11:17 pm

they were cheated out of their lives the german government or at least certain ministries didn't just look away sometimes they even helped. the victims don't just want compensation they're demanding legal justice department top was allegedly the colony 2nd in command trained as a doctor is accused of sexual abuse and administering psychotropic drugs he fled while awaiting trial and went to germany where he's live free in the town of craig last week german authorities and their probe of top citing a lack of evidence. to london now where talks between the u.k. government and the opposition labor party intended to find a bracks a compromise collapsed labor leader jeremy corbyn ended the negotiations saying instability within prime minister teresa mayes government had some doubt that any deal between the 2 sides would be capped talks had been underway for 6 weeks in an effort to break a deadlock on the terms of the u.k.'s departure from the european union. here's
11:18 pm

what those 2 leaders had to say after the talks ended when the german corbyn says actually these talks have been constructive and we've made progress to the areas where we have been able to find common ground but other issues have proved to be more difficult and in particular we haven't been able to overcome the fact that there isn't a common position in labor about whether they want to deliver it wrecks it or hold a 2nd referendum which could reverse it the government has not moved its position fundamentally were fundamental disagreements we want to have a customs arrangement with the european union protects jobs in trade and we want to have a dynamic relationship on rights we put those used very strongly to the government we would not rule which is incredible for them but it would be a referendum to something 60 to be a referendum event and no to castro protects it from the european. turning now to sri lanka and saturday will mark 10 years since the end of the country's
11:19 pm

long running civil war but it's still struggling with the scars that that conflict left behind the war broke out in 1983 pitting the single east military against the tamil liberation tigers the tamils were fighting for an independent state for the ethnic minority and may have 20 of 2009 these 3 long can military defeated the tunnel separatists but at a large human cost it's believed some 50000 fighters and 100000 civilians were killed many of them thomas today at least 20000 people are still missing their fates are unknown w. went to northern sri lanka where survivors are taking the search into their own hands. 10 years of demanding an answer j. of anything still doesn't know what happened to her missing daughter the war was winding down she says when masked men tore 16 year old jeromey from her arms and fled. not going to get where did i let go of her hand i was lying on the
11:20 pm

ground and a man stomped on my back with his boot i screamed and when i looked up the launch vehicle carrying my daughter was already a column of dust in the distance that's how fast i took off work. many people haven't heard from their loved ones for even longer in some cases several decades their stories might be different but the family share the same sense of suffering without proof their children are dead they hold on to hope. when i have other children calling for their mothers i have my daughter calling for me i hear her voice and i immediately look thinking she's come back to me. the task of finding out what happened to people like jeromey will land here at the office on missing persons or on pete it's a new commission being set up by the current administration to independently investigate the disappeared the chairman understands some people are skeptical it
11:21 pm

is extremely challenging because they have been many institutions many commissions established in the past to address the issue of the missing and for the families feel that they have had no on says we do not want to give people false promises of false hopes and b.b.b. comedically it that we try it we was trying to establish itself we would try to find it had been defined on says but that is going to take time building trust between state institutions and the people especially in the northeast has been no easy task human rights lawyers to bodge make his show and in says the o.m. p. could gain the public's confidence once they set up local offices but he also says some families are afraid. you know people may give testimony today but may have a fear that it will fall into the wrong hands so some families have said they may have more faith in the process if a foreign government or international body what with. some others like
11:22 pm

j. about a fast say they will only accept an independent and foreign led investigation. they demand and then there's a b o m people come and start from the very beginning it's been changing islam and more time will go by and that will be that. the civil war may have ended a decade ago but the families searching for their loved ones are still waiting for closure. well taiwan's parliament has legalized same sex marriage it's the 1st in asia the past such landmark legislation the bill overcame several hurdles including attempts by conservatives to move any reference to marriage despite the outcome of the vote the issue of same sex marriage continues to divide the country . the an emotional day for l g b t rights campaigners as they celebrated their victory outside parliament in taipei. the legislation survived a last minute attempt by conservatives to pass
11:23 pm

a watered down version. today the very significant day to us because we could finally pass a law is out to protect my family we've been fighting for for this change to ease. off for 5 years for me personally if it were i even my children and now that i do anything for the work. it's a happy thing for me that taiwan compounds such a lot of it although there were divisions it's still a happy occasion and i'm quite emotional 3 different bills were tabled for friday's vote but only one used the word marriage a bill satisfactory for rights campaigners the other versions backed by conservative lawmakers left out. the term marriage altogether opponents say lawmakers are ignoring the will of the people in a series of referendums last year and more than 2 thirds of voters said marriage should only be defined as a union between a man and a woman but that's far from the minds of these rights activists celebrating what is
11:24 pm

a landmark day. all right joining me now is kyle nighties an elegy beach he writes researcher for human rights watch in new york i mean this has to be seen as a great success for taiwan's.
left
right
disc Borrow a DVD of this show DVD
tv