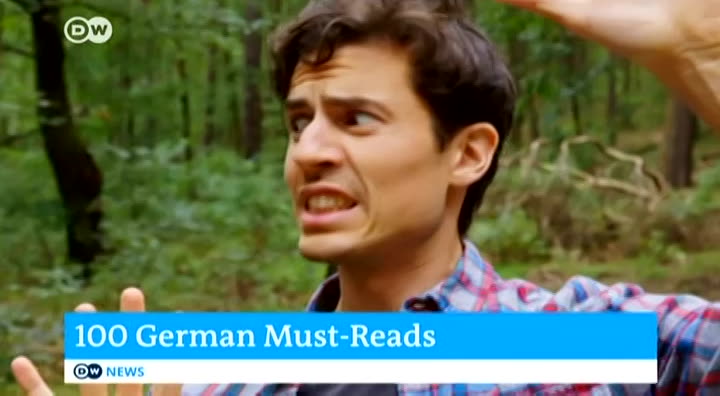 in a forest behind an invisible wall favored leavitt's with another great book writing my report makes us wonder just how little american film director terrence malick former winner of the palme d'or is back at the cannes film festival with his latest movie a hidden life it's based on the true story of an austrian conscientious objector in the 2nd world war who refuses to take the oath of allegiance to hitler as an army conscript and suffers the consequences here he is only on in the movie returning home to his family from military training.
8:46 am 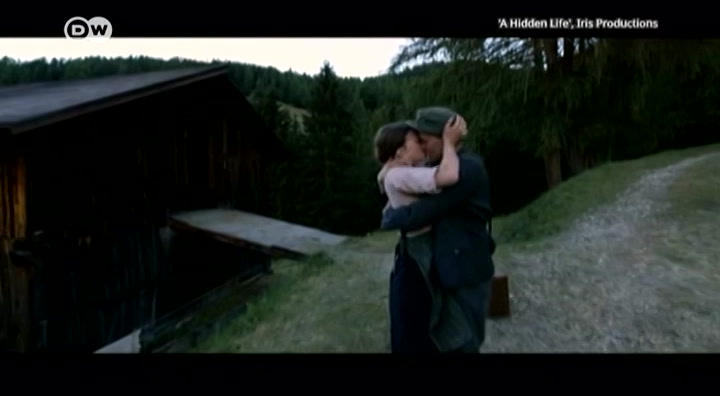 for the. world. and joining me now from our vet in cannes is all man scott ross from scott some lovely acting there i thought some heart warming scene there in the movie you've seen the whole movie did you as a good. yeah you know i think it's really spectacular i mean if you
8:47 am 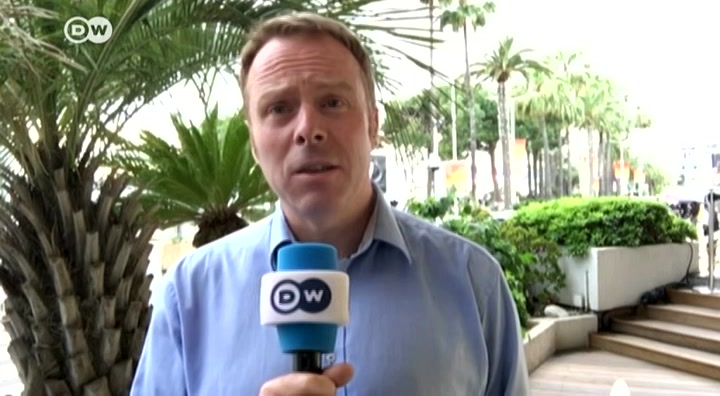 know talent terrence malick films like days of heaven or the tree of life you know he likes take on really big subjects you know more reality faith the the meaning of life itself and this is the case here as well with an incredible performance central performance by steel the actor i was the as fun this conscientious objector who would rather martyr himself than fight for fight for the nazis very very powerful movie it is quite long it's 3 hours long and as very slow as malice films tend to get you tend to be but it really really works on you in the end packs i know incredible emotional wall up now my late no recent movies by him haven't done so well and he's been accused of being self-indulgent is this is this now a return to full. definitely definitely last 3 films were incredibly self-indulgent as you said i'd even say they're bordering on self-parody but but this film really sees him go back to the the kind of movies he
8:48 am 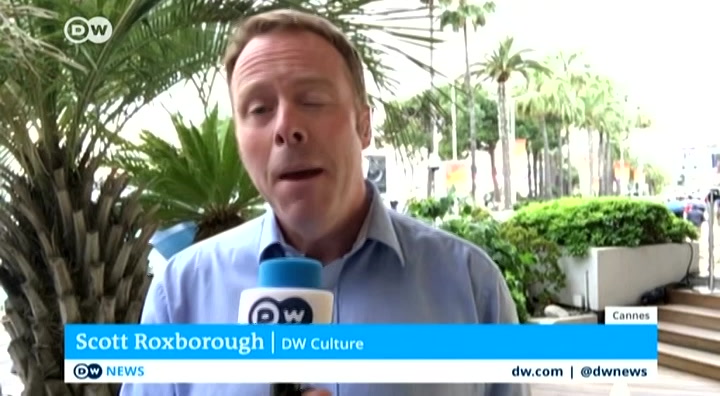 was making back in 2011 with the tree of life which similarly took on issues of of morality of faith and it did it beautifully that won the palme d'or here in 2011 and this film i think is just as good so maybe it will repeat the feat this year. oh wow about be interesting if you want to go now one else has course you or i this year it can. yeah i like to recommend a great film but i just saw today it's for the 1st time american director michael angelo. the film is called the cline and it's the story of a friendship of 2 guys told through 6 key events in their lives a very simple story but beautifully told very sweet very touching and also laugh out loud funny it's by far the funniest movie i've seen here in cannes called the climb definitely mike at the camera used to be ok not
8:49 am 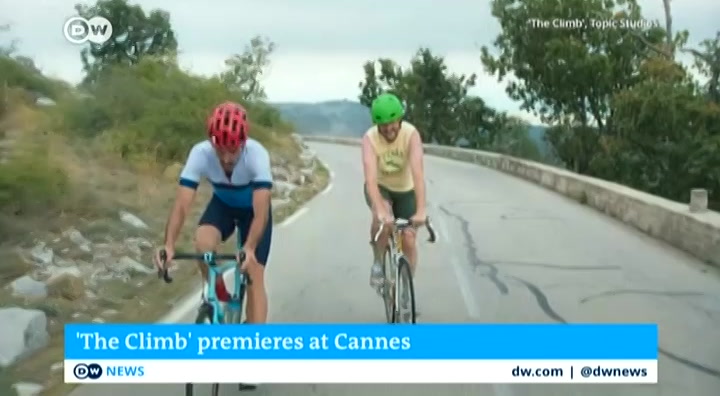 a lot of cowman often that can be said that finally school the newtown until you know movie will will premium suit huge anticipation not only the cost of course but the title it treats rewards upon a time in hollywood sounds interesting i guess you're looking forward to seeing the . film is the hottest ticket in town by far yeah it's called once upon a time in hollywood we don't know a lot about the movie except that it set in hollywood in the 1960 s. sort of around the time of the of the manson murders stars brad pitt the capital margo roby and it's going to premier 25 years to the day here in cannes that pulp fiction premier and of course launched quite an amazing year as i say i don't know a lot about the movie but you know always knows how to surprise us and i really can't wait yeah i think brad pitt seems to be the stunt double of of live in order
8:50 am 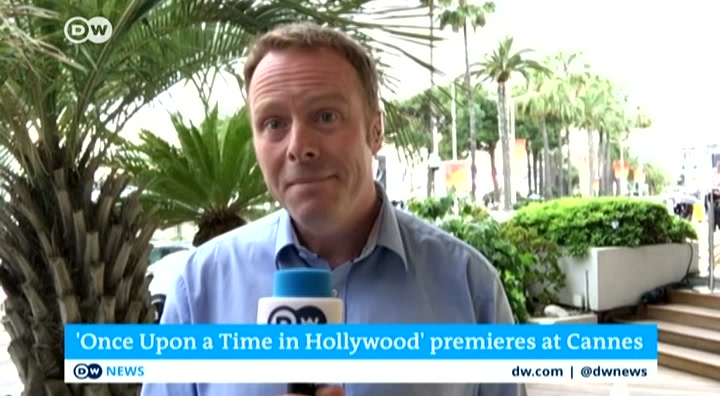 to capture it it sounds wonderful i know i know you'll be back talking to us about that scott ross perot fanatic thanks very much. and we stay in france for our next report strauss book is sometimes called the heart of europe as it's the official seat of the european parliament and leading up to e.u. elections this weekend we're visiting artists in various e.u. countries to see what they think about current issues and stress boys national theatre is reflecting the armrest on the streets against emanuel crawls reform policy. protests against the president's reforms have been raging on the streets of france's big cities for months now. the neglected province against the rich capital . the underprivileged against the elites. stanislaus not day an actor and the director of straw sports national theatre
8:51 am 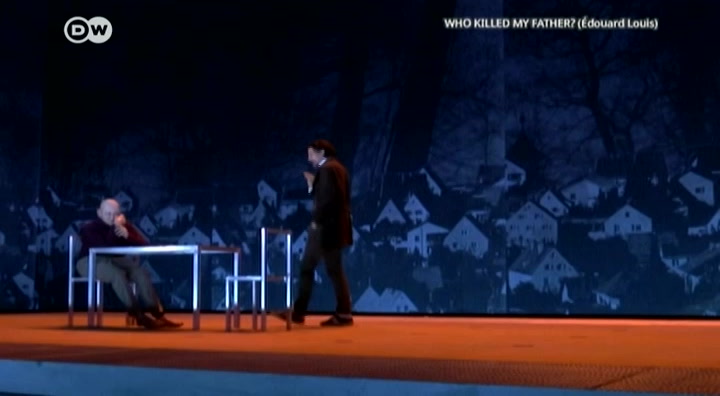 decided to explore the social tensions on stage. in france there are no children of factory workers or of agricultural workers among the elite there's a kind of sticking together and i think there's a form of line as it's also indicative of a more general problem in our western democracies. is all of society really represented by elites. this is a rehearsal for the edouard louis play who killed my father. it's a polemical work against france's social policies to sit. between. the. leaders in the dark workers as characters on stage. the theatre wants to give all sectors of society of voice and
8:52 am 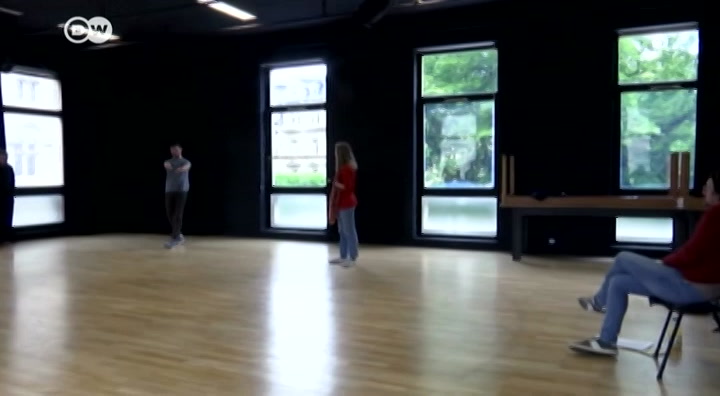 a stage and this approach is also that of the theatres drama school of law school use among france is very much behind the theater scene is desperately white this does not. french society. so what's the difference is. not today is working to change the ensemble so that it reflects french society better with all its ethnic groups and all its social differences if positive discrimination is needed to recruit young people from less educated families so be it he thinks that otherwise everything will stay the same. straw sports national theatre is the only one to enjoy special national theatre status outside of paris many small cities don't have any theatres at all centralisation is one of france's major problems and there is a huge gap between the center and the periphery of. this imbalance is also reflected within europe itself. this is the subject of fark race does play i am
8:53 am 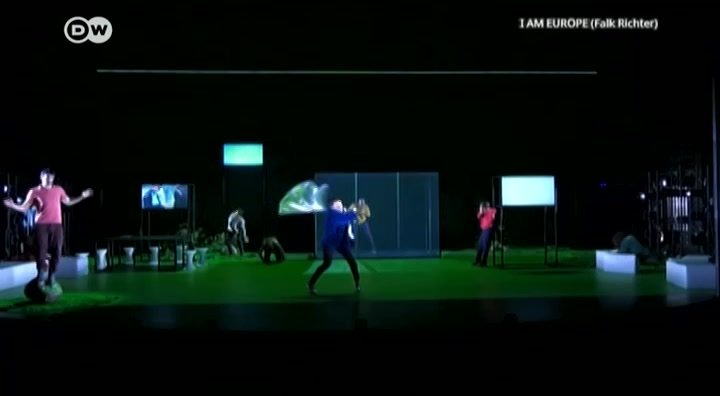 europe which studies last nor did a staged at the beginning of the year. let me tell you that. we. saw not only france is in crisis what is no days vision of europe. it's a place where people come together because they have something to say to each other just because they want to try things i can all make arguments and not enough it's not enough to say that france alone wouldn't be able to negotiate free trade agreements that's a bad argument i think people need to have something to dream about. in our continuing series 100 must reads featuring famous german language books that
8:54 am 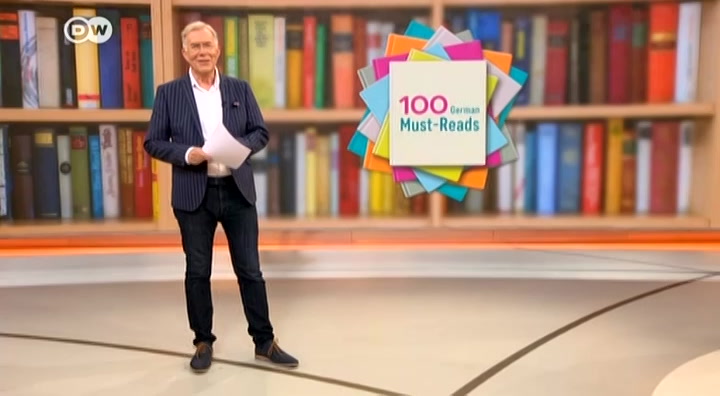 are translated into english today's novel is called the wall by the austrian author mollenhauer. there's a cataclysmic event. at the beginning of the novel which means the main protagonist whose name we never found find out is alone in the world behind a kind of wall anyway here's david levitz to explain more. what if my arms were right and you could actually get trapped behind an invisible wall and what if you were trapped behind an invisible wall alone in the forest and you were possibly the only person left on the planet. in. austrian author molly and household for wrote about this mysterious invisible barrier almost half
8:55 am 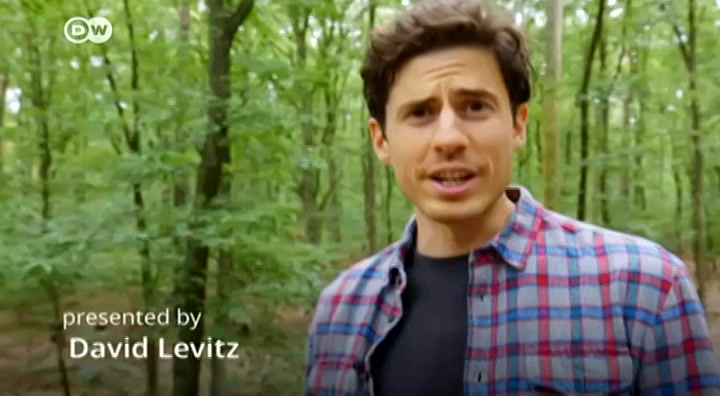 a century before stephen king got the idea of. the main character in her book the wall writes a journal about survival in this solitary confinement not because she likes to write or has anyone to write for she does it to preserve her humanity. not that i'm afraid of becoming an animal that wouldn't be too bad but a human being can never become just an animal he plunges beyond into the abyss i don't want this to happen to me it's out of that fear that i'm writing my report once i've reached the end i should hide it well and forget about it i don't want this strange thing i might turn into to find it one day. to survive physically as she learns to kill animals to survive emotionally she learns to love other animals a cat a cow and a dog as her own children. in the film version actress martina gay dick plays the nameless protagonist the movie was austria's entry for the oscars whether it's the
8:56 am 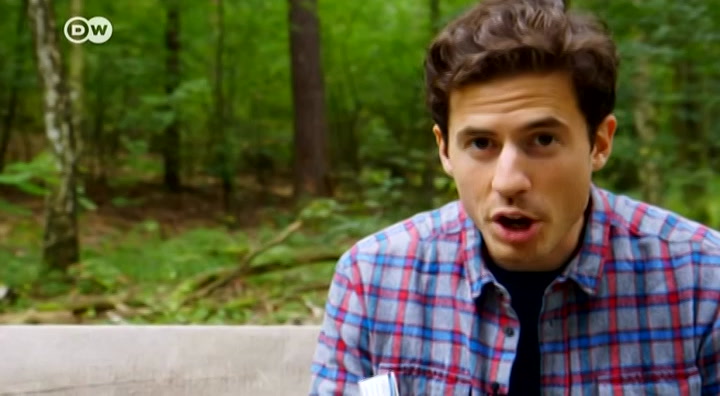 film or the book the wall makes us wonder just how little it would take to turn us humans and to beasts. these traps but they've been back next week that's it for this edition of arts and culture i leave you with pictures from the cannes film festival and the next time you see him on my mascot roxboro will be reporting on quentin tarantino's new movie once upon a time in hollywood but he is the glitz and glamour of the red carpet of life in that.
8:57 am 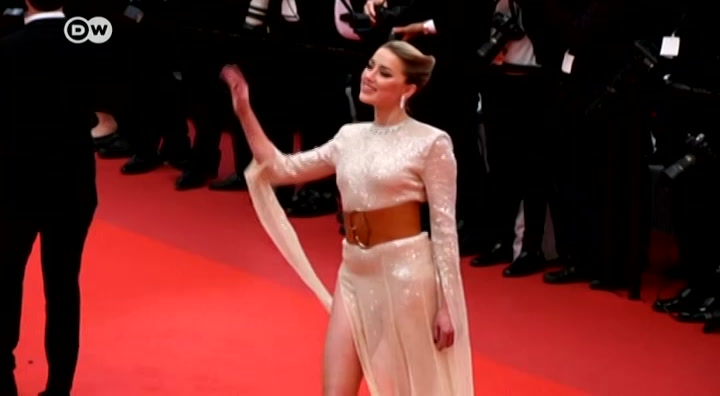 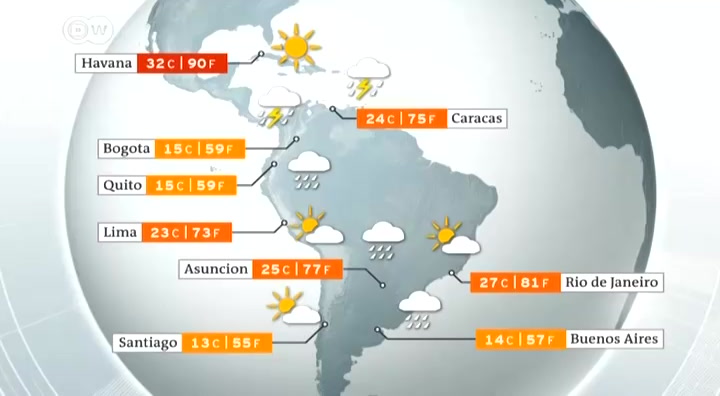 well so if i'm not playing even anything with alan skill. one last match day to scold going to saeed to say goodbye life is a most celebrated business model munich of a champion and a damn. good. 30 minutes gone done. he takes a good personal way. with all the wonderful people and stories that make the game so special. for all true fans.
8:59 am 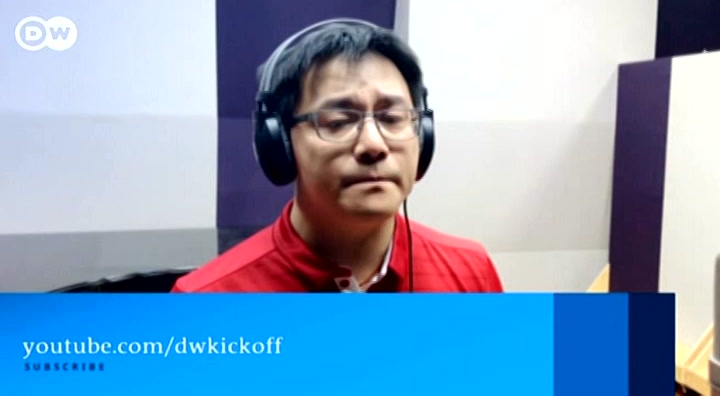 pick up more than football online. early the global tourist guide function is booming capital i love berlin the scope of the multicultural metropolis you know or you're a mix series the band i. like the term. i love the even was sure it was a swiss unlike some swiss like me spices 50 nations 50 stories and 50 very personal tips on berlin's very best chums. now an early start may 25th on t.w. .
9:00 am 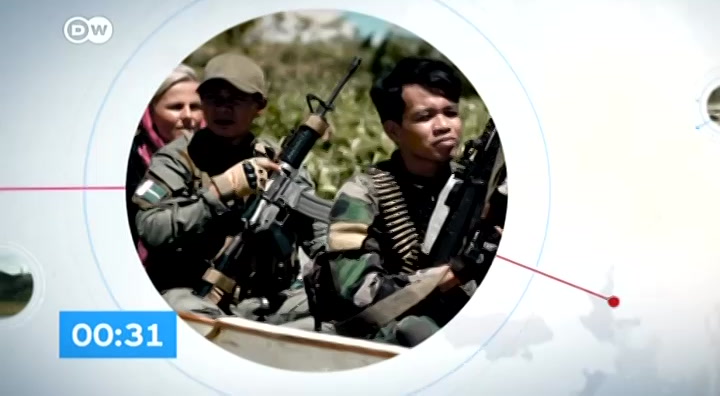 this is news coming to you live from a formula one racing legend niki lauda has died his family say he passed away peacefully in his sleep it was known for his remarkable comeback from a horrific crash in the 1970 s. a look back at his career and his achievements beyond the truck also coming up.
left
right
disc Borrow a DVD of this show DVD
tv