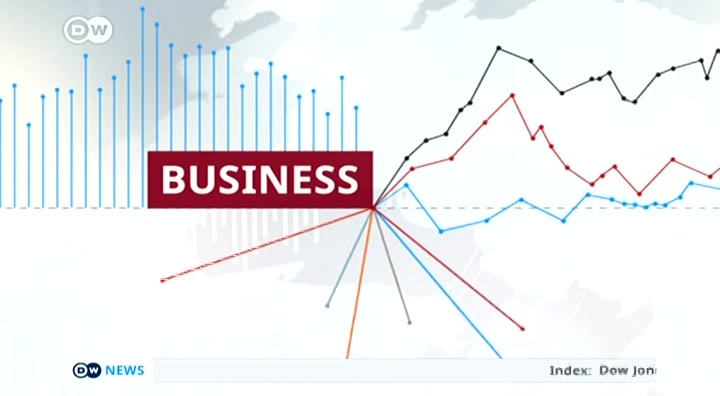 2 decades of negotiations and a deal at the end the european union and the south american tourists try to strike a trade agreement signaling their push for opening markets at a time of increased protections also coming out of the g. 20. of the most important countries of the world meeting japan hoping that an end to the toxic u.s. china trade dispute his insights and italy may have one of the highest unemployment rates in europe but it's also home to one company that could put even more people. are welcome to the program while the future of u.s. china trade ties hangs in the balance at the g. 20 summit europe is blazing ahead on a different front. european union south american economic club marcos or have announced they've reached a deal on forming the world's largest free trade zone both sides are hailing the
5:03 am 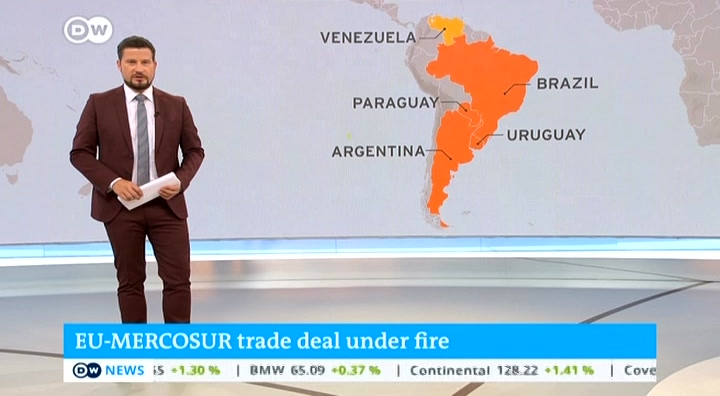 historic breakthrough after 2 decades of negotiations but the deal is not without its critics. in brazil large areas of amazon rain forest are being destroyed to make way for cattle farms much of the meat is exported to europe. now that the e.u. and south america's mercosur were block have struck a provisional trade deal it could result in higher quotas for b. thank sports to europe. german chancellor angela merkel had pushed strongly for the lucrative agreement she hopes it will give a further boost to german industry for example through car exports i like many e.u. leaders she's looking to multi-lateralism at a time when the u.s. is pulling back from free trade. the draft agreement ends nearly 20 years of negotiations between the e.u. and sewers full members brazil argentina uruguay and then now suspended venezuela.
5:04 am 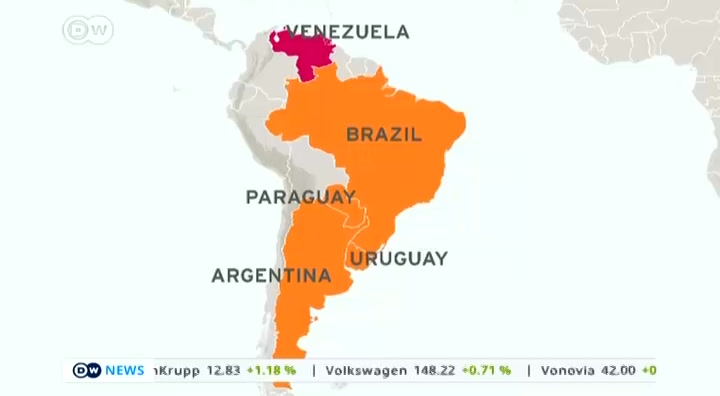 but the deal faces hurdles before it's approved harsh criticism has come from european farmers and environmentalists you have beat that action brasilia of people to action in europe so what's the point shipping the same product of atlanta this is our 1st point the 2nd one is that cows in europe affect that a lot of soy which is scroll in farm areas that they are so you have different station brazilian presidential year both so narrow has lauded the deal but there are concerns that he could make good his threat of pulling out of the paris climate accord and then even more rain forest could be destroyed to push exports of beef and floyd beans. it's crunch time and all soka leaders have started their talks on global trade foreign policy and climate change at the g. 20 summit the most anticipated and counter will take place on saturday when u.s.
5:05 am 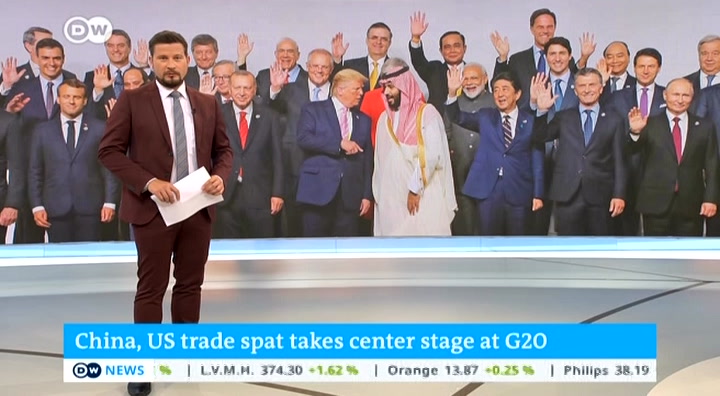 president trump sits down face to face with chinese president xi many are pinning their hopes on this meeting to finally end the 2 sides bitter trade dispute that is increasingly taking its toll on the global economy. as global leaders in the world's biggest and fastest expanding economies gathered no saka for a g. 20 family photograph the group mostly men mostly wearing suits it was all business . as of every g 20 summit there were plenty of core duo greetings in a move that could easily xyzzy in financial markets u.s. president donald trump and china's president xi jinping show comes. to trade dispute between the world's 2 largest economies is uppermost on everyone's mind. it's a cloud hanging over the g 20 meeting. trump's america 1st trade policy is causing particular headaches for the export relined brics countries. china russia brazil india and south africa. under these conditions it
5:06 am 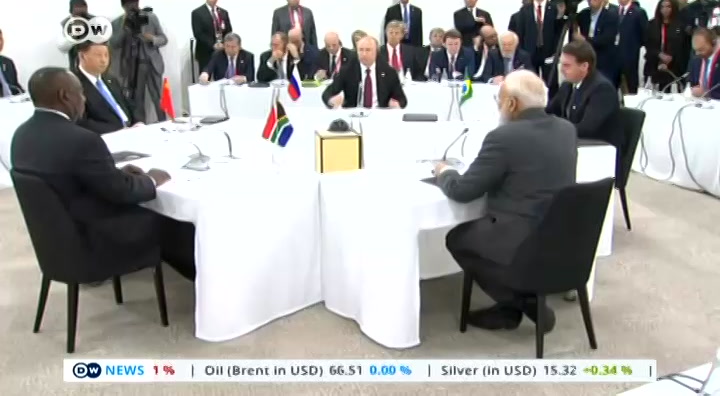 seems the brics states should take the initiative in shaping a more equitable and sustainable model of global development based on the principles of equality respect for sovereignty and taking into account the interests of all countries that you can use a. laser japan shinzo a host as a dinner for the leaders including trump and she they are due to meet on saturday to see if they can resolve their trade conflict. ave raised his glass to a successful summit and the leaders enjoyed some traditional japanese theatre a breakthrough on fixing the global trade issue would be truly dramatic. let's get a quick check on financial markets shares of tech company apple have been under pressure after long time designs chief jony ive announced that he's leaving the
5:07 am 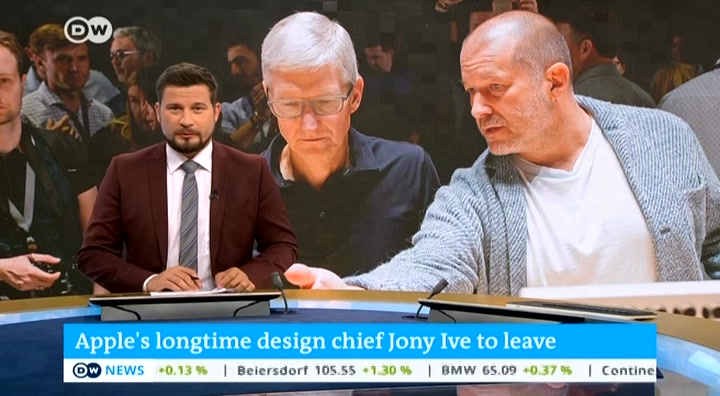 british born designer has been behind the look and feel of some of the tech giants most iconic products not only the popular colorful eye and their computers from the 1990 s. but also the i pod i phone and i pad apple says i have is setting up his own company. for more of the story let's bring in you have scored our man on wall street yes how will this departure impact a company whose entire marketing strategy is based on the unique design of its products. yeah was crucial to bring back apple in the ninety's from near bankruptcy and jim well that's your hinting the devices if you look for example of smartphones the i phone or the samsung devices for example are not that much different if you look at what those devices can do so design is king in that regard to but since 2010 was the introduction of the
5:08 am 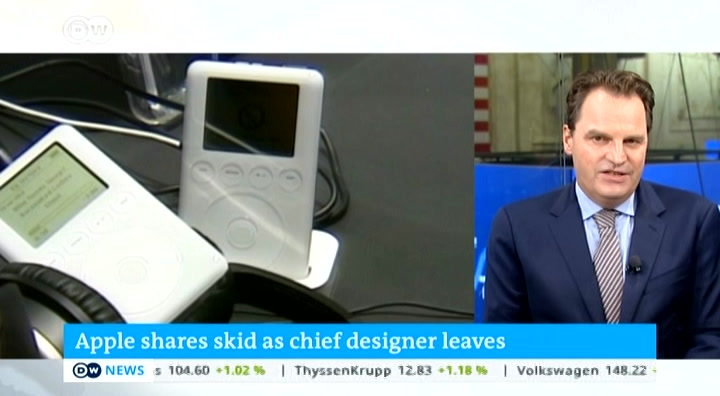 i pads apple did not really have a new killer devise out and the decision still that johnny ifas leaving the company is a clear sign that f.l. is not so much for posting anymore on hardware but services that is supposed to be key for apple future but analysts on wall street are a bit concerned that johnny ife is starting his own company and leaving apple even if you claims that he will still work closely together with his former company yes thanks for now we'll come back to you in a moment overall wall street wrapped up the best june in decades also thanks to a boost from banks financial stocks were among the big winners in friday's trading session earlier the federal reserve announced that 16 banks including j.p. morgan bank of america and even beleaguered deutsche bank cleared the fed's annual
5:09 am 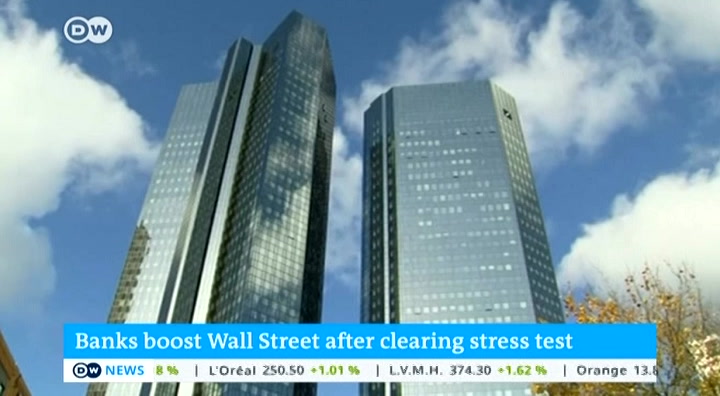 stress test inspector you in new york are good news for major banks and they're already making the most of this announcement. yeah you can definitely say so we already got major announcements for dividends and also for share buybacks in the billions goldman sachs for example is announcing it to increase the quarterly dividend by almost 50 percent and you could clearly see that here on wall street and the dow jones industrial average for instance goldman sachs j.p. morgan being the leader of the pack and talking about the pick now we did finish not just the months not just the quarter but also the 1st half of the year and the s. and p. $500.00 in the 1st 6 months of $29000.00 gained about 17 percent and with that it's the best 1st half year on wall street since 1997 so in more than 20 years so now
5:10 am 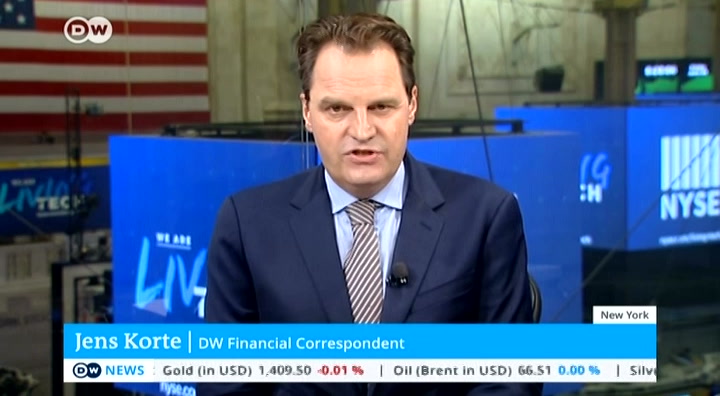 the hope is that all will go well with trade talks in japan and that also that the federal reserve will cut interest rates by the end of july and go to new york thank you. now to some of the other global business stories making the news as a bank could slash as many as 20000 jobs in an effort to stay afloat more than 20 percent of its global workforce that's according to the wall street journal. having has been telegraphing deep cuts but has yet to give numbers profits and share value have plummeted and torture in recent years lego may already own the rights to sell the london eye as a toy but now parent company is going to buy the real will lego owner kirkby will take over britain's merlin entertainment marilyn also owns madame tussauds b. will combine forces with the u.s. privately private equity who brags blackstone and a canadian pension fund together paid $5600000000.00 euros german investment firm
5:11 am 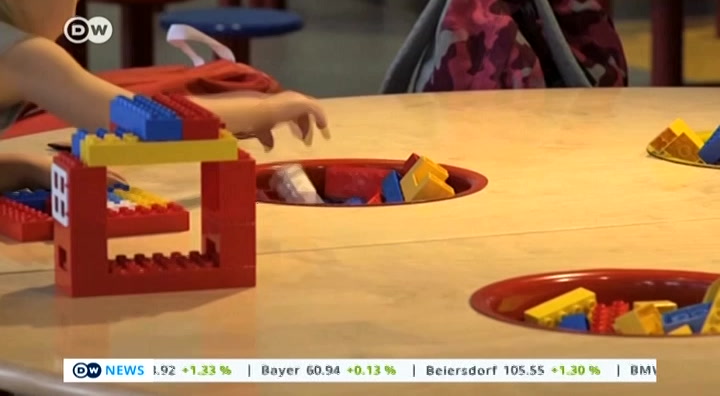 tenner is buying a stake in bonds the club have to believe in $425000000.00 euros the deal is said to be the biggest in the german league's history tenor had last been taught said he believes the big city club can make more money at officials say they'll use the funding to invest in players. italy has one of the highest unemployment rates in the european union so it is perhaps ironic that one italian company is leading the way in creating technology to replace human workers but it insists it's a force for good in the jobs market. in an ever more automated world putting things into boxes is one of the jobs thought to still require the dexterity of human hands . but even that is changing thanks in no small part to c m c a family run business in the italian town of she taught to cuss teller it supplies some of the biggest players in internet shopping with fully automated packing machines and he's making
5:12 am 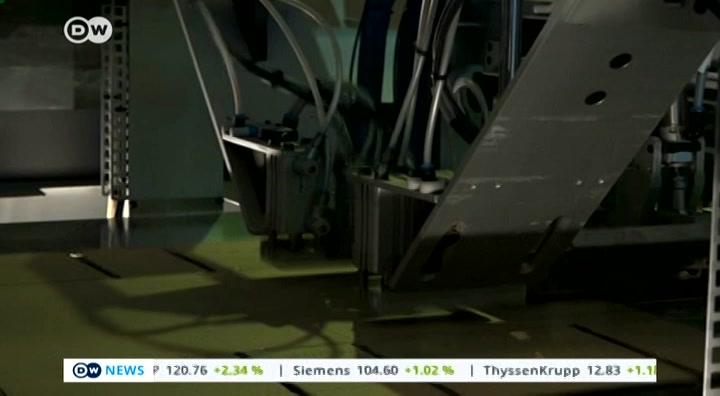 good money out of it we double our over the last few years and i think we will double again next 3 years to see m.c.s. biggest seller is this a system that measures goods as they come down the conveyor belt and sizes the boxes accordingly the company and its $300.00 staff produce 5 or 6 machines a month its management denies the technology could drive up unemployment by removing low skilled jobs from the market keep the mission to people that work in the mission and the quality of the war will be much better off there is nothing. without reason wal-mart gucci and french retailer le claire all using its machines c.m.c. has this corner of the automated market hall wrapped up. and that wraps up our program if you want more check out the w dot com slash business or follow us on facebook or twitter i'm chris cobra bill and thanks for watching here's
5:13 am 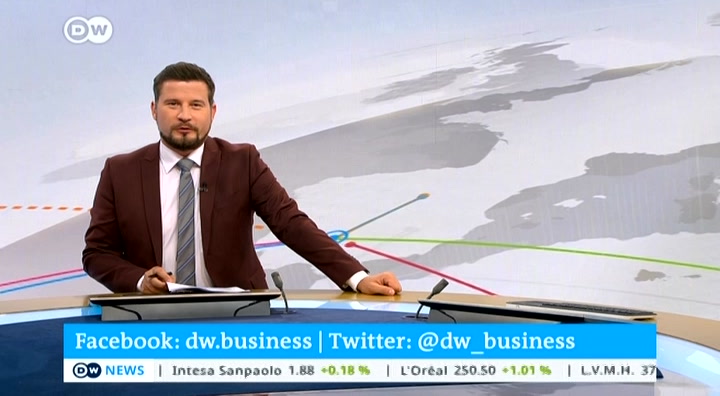 a quick look at how well the markets are trading after south africa.
5:14 am 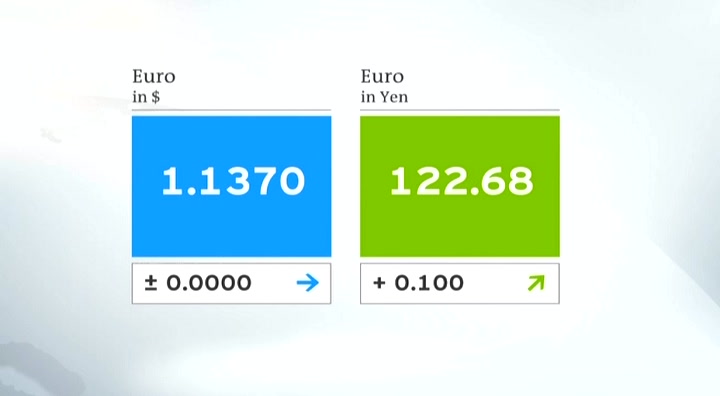 closely. listen carefully. since. this is a good employer. discovered. subscribe to the documentary to. never has it been the stock. is facing mass extinction. you could say that topic suffers in danger. but there is
5:15 am 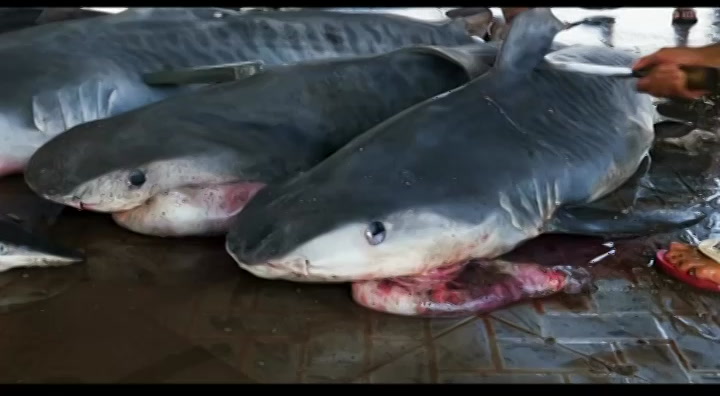 a glimmer. because companies are uniting to create a global. village. not only animals. to. the lion's share of the conservation. this is d.w. news africa coming up in the next 15 minutes the place where there is no space for criticism human rights watch says that place is rwanda we'll hear from one woman who says she's made big sacrifices to deepen the political debate in the country and will keep doing so. and then president and also in south africa a community living in the midst of cold tawa stations is suing the government for violating people's rights to a healthy environment more on day case coming up.
left
right
email Borrow Program
tv