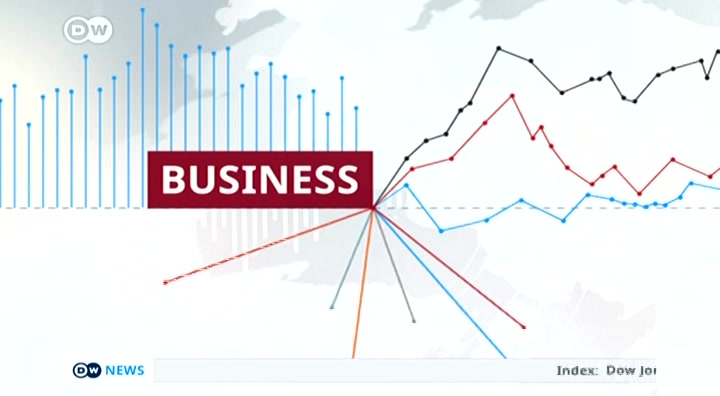 a 12 punch practically designed to take off donald trump he's responded in kind after china hits the u.s. with a fresh round of tariffs on american goods and after the feds jerome powell didn't respond the way trump wanted him to. some worries they can't drink away french pensioners are anxious over donald trump's threats to slap levies on their wine. a historic free trade deal between the e.u. and the bloc may go up in flames as pressure mounts on brazil over the wildfires raging in the amazon. this is the business i'm joined in berlin welcome now this may surprise you but china's earlier unveiling of a new round of retaliatory tariffs on about 75000000000 dollars worth of u.s. goods triggered an angry response from president donald trump he's an entire tariffs on chinese goods starting in september that's after an earlier tweet storm
3:03 am 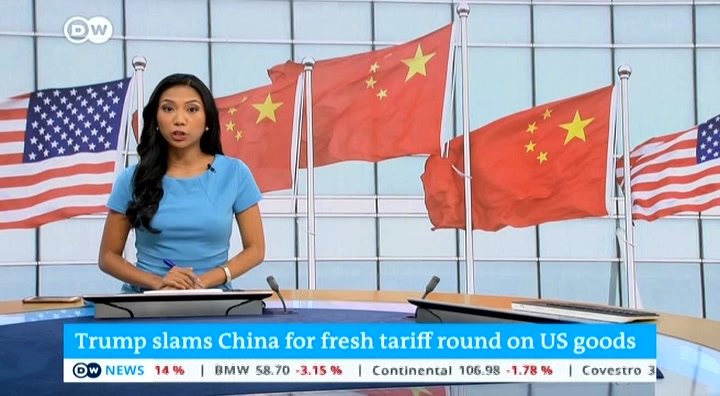 accusing china of costing the u.s. trillions of dollars he also said u.s. companies were quote here by order to immediately start looking for an alternative to china now just as a reminder the latest round of tariffs from beijing was a response to washington's last move to tax an additional $300000000000.00 worth of chinese goods taking effect on september 1st and december 15th which have now been increased to 15 percent from 10. joins us now from wall street younes when trump says that american companies should look for alternatives to china apart from shifting manufacturing back to the u.s. what does that even mean. well i mean clearly the u.s. president can force the u.s. corporations to move their business away from china about to it clearly marks an escalation point in the trade relations between china and the u.s.
3:04 am 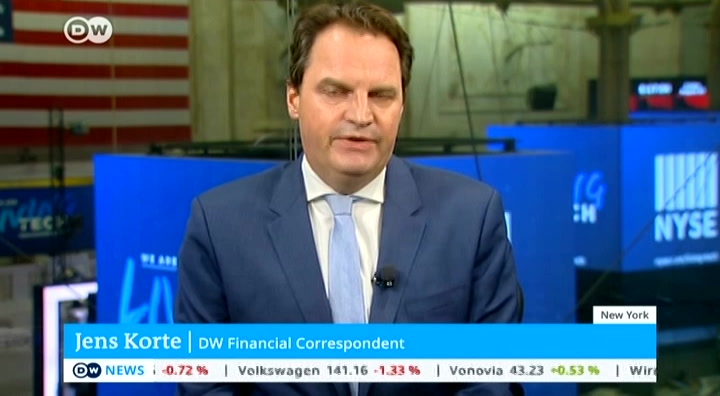 and after the market closed here on wall street u.s. president on a drum announced that he is going to increase tariffs on chinese imports and investors on wall street clearly got to call it on the wrong foot and then specially shortly before the weekend nobody really wanted to have too much risk in in the market before the weekend and we saw quite a sell off here on wall street at some point. by about 800 points by the end of the day blue chips were off by a good 600 points and that marks the 4th consecutive week of the losses here on wall street a fast moving story right before the weekend we can all relate but stick around because there's more to get through and to another target of trump's ayer u.s. federal reserve chairman jerome powell has been under pressure from the president to slash the interest rate soon a powell has given little and the occasion of any change to interest rate policy in his speech to the u.s. central banks will gathering in jackson hole wyoming here he is walking with
3:05 am 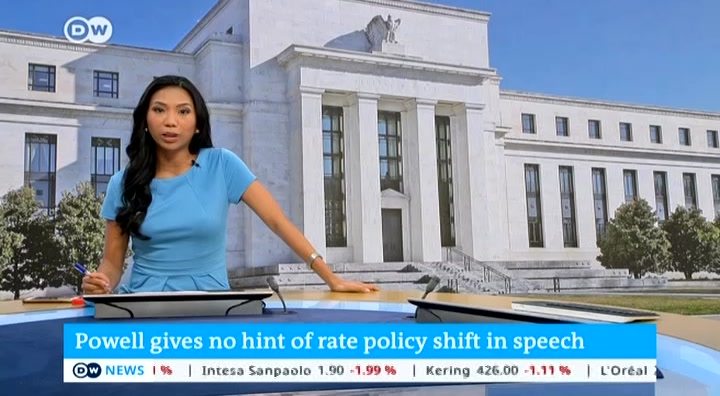 outgoing bank of england governor mark carney after delivering his remarks the world's most powerful central banker said the u.s. economy continued to perform well but he did note the risks linked to its trade war with china and said monetary policy alone cannot fix all the potential economic fallout from it. and we're back with yes quarter on wall street now again what is wall street expecting now with regard to future rate cuts. jerome paul as expected stood not clearly mentioned that we are going to see another interest rate cut anytime soon he said that he's going to he and his fellow. members of the federal reserve are going to close the observe the developments and then act accordingly but the bets on wall street are crystal clear investors here see 100 percent chance that we will see another rate cut at the next meeting mid september
3:06 am 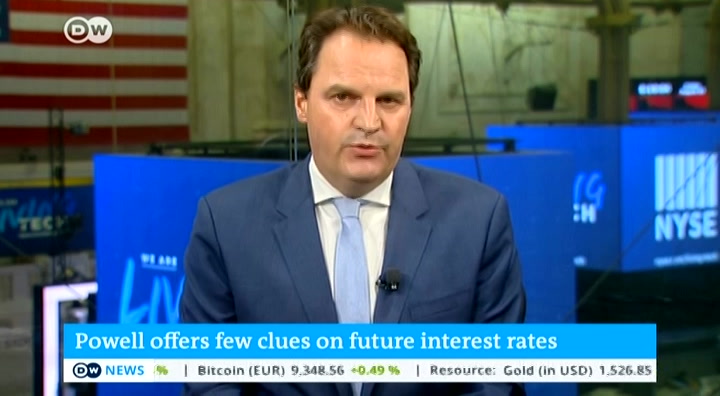 and chances for another rate cut in october stand at more than 70 per cent so wall street is convinced we will see those rate cuts and that actually the market a little bit before we got this tweet storm from a u.s. president donald trump. card to there with us on wall street thank you very much. and returning to the topic of tariffs at this time from the u.s. on french wine wine is france's 2nd biggest export their u.s. is by far its biggest market and last year it imported 3600000000 dollars worth of the stuff washington has threatened to slough slopped huge levies on it a move which will play serious pressure on vintner's across fronts. at the end of the summer trimming the vines of their excess leaves is one of the last tasks wine makers face. after that it's wait for the harvest this year vindu
3:07 am 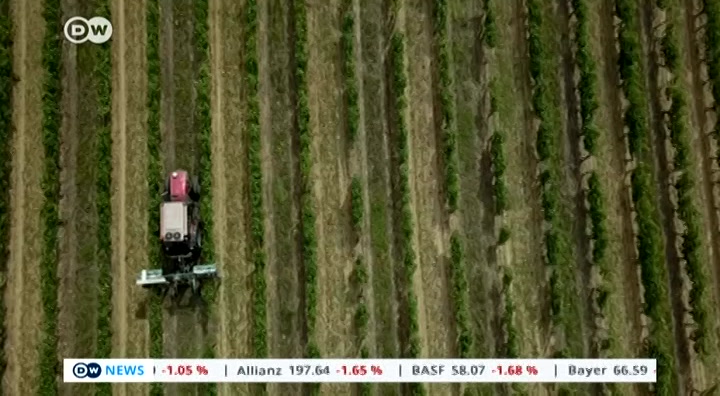 pierre thomas thinks his bordeaux could turn out fairly well. so far the year has gone smoothly and he could only august the wine harvest is in early october so we have a bit of time before we know for sure. so i and mark. less predictable is what will happen to sales especially to the united states after president trump said he would slap a huge import tax on french wines a threat pierre's brother in law is taking seriously the family has worked the vineyards here for 3 generations and he says every penny counts. i think he was already that's his character. but i hope he is not serious. if he really doubles the customs duties are french wines really i don't
3:08 am 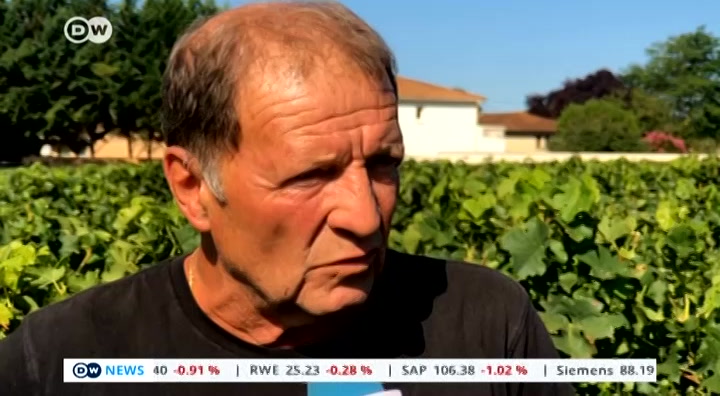 know if we will be able to make any money on the wines we exported to the united states. maybe in some time in young some $2400000.00 cases of wine are produced every year wine making here goes back to roman times the region was even declared unesco world heritage site the finest vintages always find a buyer but wine merchant maxine peake says meat market producers will suffer. or die points they might survive it and new markets will come i mean if it's done they're going to us they will go to another place is when you heard the best in something you would already have them and so that's i my opinion not the big problem and another layer of uncertainty to a laborious production process a process that is already being threatened by stream whether that most scientists put down to climate change. and i should leave for hector's of our vines froze this
3:09 am 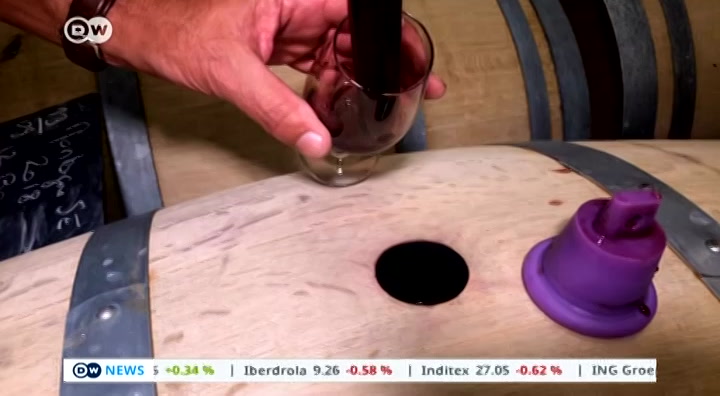 year and it can hail any time before the harvest there are many weather patterns we just can't predict it. pierre and his family are confident the french president will stand up for them at the g. 7 summit whether or not he wins the political battle could affect wine lovers all around the world. french president. has promised that this year's summit of g 7 leaders and berets full focus on the fight against inequality it's a tall order given that the g 7 been talking about this issue for years now with little to show for it at least that's what she 7 critics say. ahead of the summit the organization set out 7 key issues it says the g. 7 must act upon. for years oxfam activists have shown up at g 7 summits to protest against social inequality. this time around and berets is no exception. the g 7
3:10 am 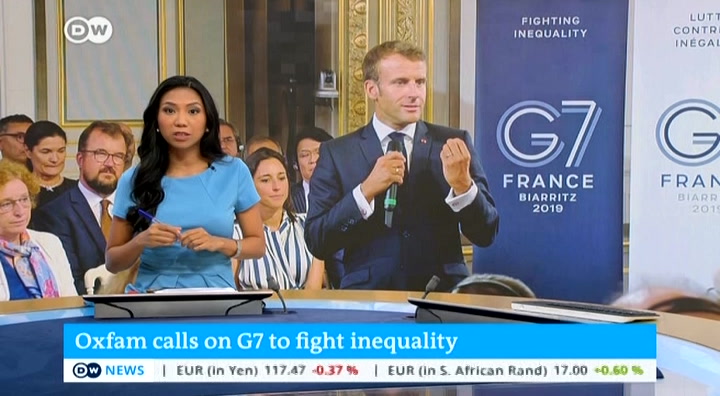 countries oxfam says have to get that act together. the protesters dumond's include increased climate protection more funding for education and health fair tax systems gender equality. because we need to show that there is a difference between the acts of all the press and present here on the reality and the there is a lot of speeches very interesting all the warts are there but not and we need to tell them that is time to be brave time to be brave time to act against inequalities time to act against poverty. some of these points like the one concerning gender equality came up in talks on friday between among the president of g 7 host country france and you know representatives but several protests calling for an end to empty promises still slated to take place on the sidelines of
3:11 am 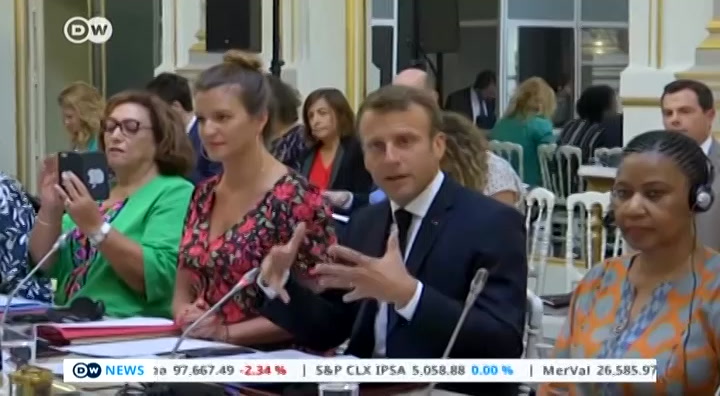 the so much. the free trade deal between the e.u. and south american bloc markets or took 20 years to negotiate was finalized in june but now it's on shaky ground france and ireland say brazil has were nega on environmental commitments in the deal and they will block it as a result that's amid an international outcry over wildfires raging in the amazon. the amazon fires may be an environmental disaster but they are being found by the country's crippling recession. populus president jar about so narrow is using his country's economic plight as an excuse to allow corporate interests free rein in the wilderness under both the narrow deforestation has accelerated wide swaths of the rain forest have been cut down for temblor or even worse burns down to make room for cattle for soybeans or to be developed by mining companies there are rich reserves of copper in the area a treasure trove for
3:12 am 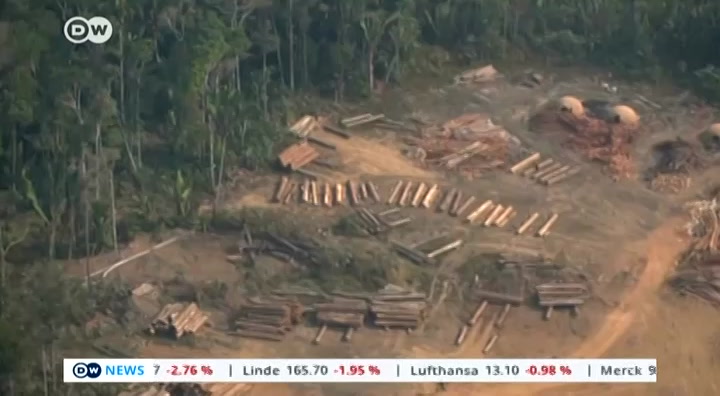 a populous president many experts say the dire economic situation and much of the country has unable to bounce an arrow to implement his agenda. by using we have a country an economic recession and this kind of thing is happening so dizzy the father has under the tree are saying it's illegally done by people invading areas that shouldn't be ok pyatt. both scenario planned on wednesday that environmental groups are responsible for the fires without evidence when pressed for evidence he said it was simply his feeling the fires are strongly suspect to result from the recent intensification of deforestation in the amazon brazil has seen an 84 percent increase in forest fires this year more than half in the amazon region. that's it for me and the business team here in berlin for more business news and features check out d.w. dot com slash business are follow us on social media i'm john el-gamal allen thanks
3:13 am 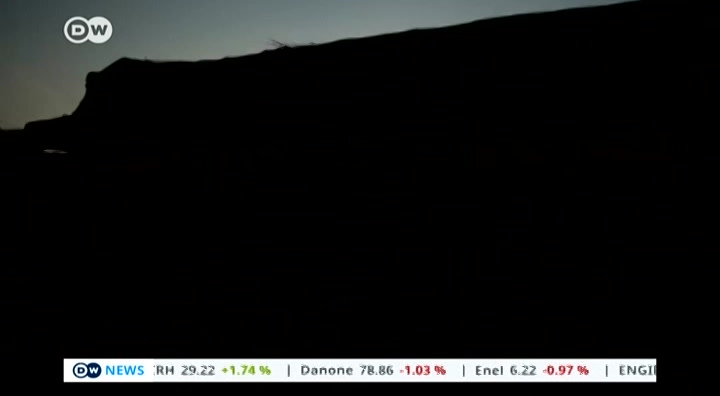 for watching and have a happy weekend. when we were. 80 percent of americans at some point in our lives will experience
3:14 am 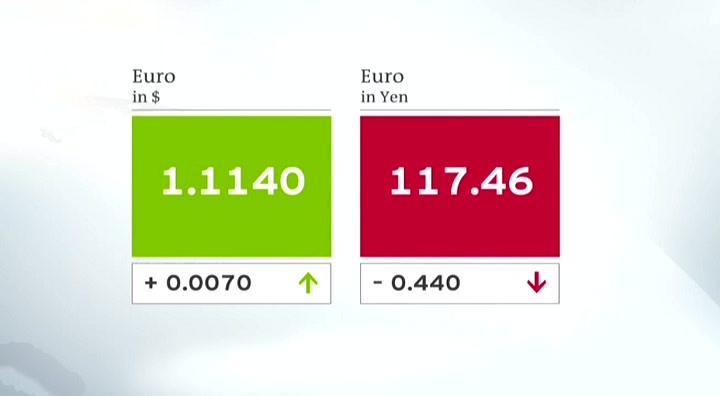 hardship that. technology. market. made ensure. your business magazine. her 1st day of school in the jungle. ready first listen. the. door is green the moment arrives. join the regular turn on or turning back to freedom news you know we're interactive documentary. the world the entertainer
3:15 am 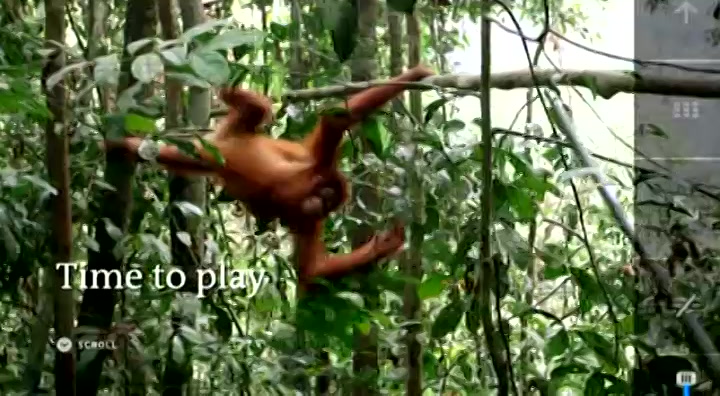 returns home on t w dot com the times. this is africa coming up in the next 15 minutes the zimbabweans who've been tortured a comedian is in hospital often lost man abducted and tortured hit she saves her attacker has accused her off undermining the government with his kids while they have as she lay in search. detachment in the muscle and told me to do what soldiers do in training. they shoved my face in the water then they said drink the water. as if you will goggling salt water. and the poison generation.
left
right
disc Borrow a DVD of this show DVD
tv