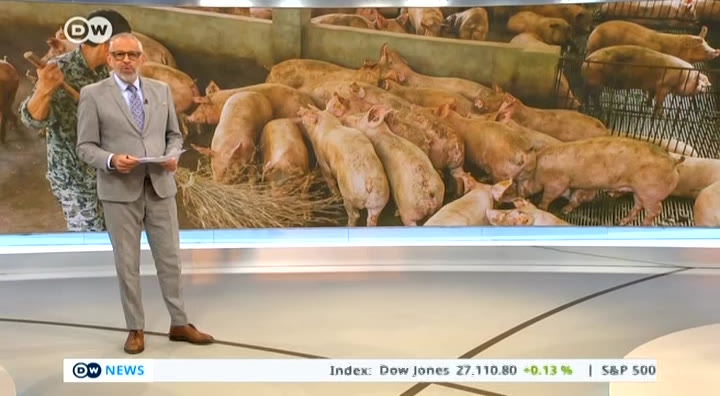 his address to supporters certainly had the tone of a victory speech for his blue and white party. v. had get so tired mr courting to the initial results netanyahu did not succeed in his mission. and that he we on the other hand prove that our idea called blue and white a project we established just over 6 months ago is a huge success and here to stay. that you could have. this man immediately cast himself as kingmaker avigdor lieberman the backing of his secular right back to new party will be vital to the formation of any governing coalition. when are. we have just one option. a broad liberal unity government. formed of years real bring to new. likud and blue and white. voters defied predictions of fatigue and turned out in
3:46 pm

larger numbers than the last poll in april now they want a path forward many say after 10 years in power it's time for netanyahu to go. you know you sure you know who has probably run his course and his time has passed about as well though. as so often in the end netanyahu is like a phoenix when we think he's finished he rises up again but i really hope that the government will change i think he was a good leader but i think is about time too and a chapter or period. benyamin netanyahu is political survival is on a knife edge long deemed a political wizard this election may turn out to be the one that broke his spell. the deadliest on the korean one joins me now from jerusalem tanya more information is coming out there what's the latest you can tell us. yes the central election
3:47 pm

commission has released the latest figures now 90 percent over 90 percent of the votes have been counted now and this translates into 32 seats for blue and white and 31 for the likud now what analysts do here now immediately is to look at the different blocs what it means for the center left a bloc which includes blue and white they would come up with $55.00 seats and the religious and writing group would come of this $56.00 seats so nobody actually is on a clear pass to form their own majority government now who comes in here as a possible kingmaker this is most likely it appears to be of it to leave them and is retained or he has obtained 9 seats and he already made clear that he would like to see a unity government but there is also talk at the moment but other scenarios for example like a minority government that would also be possible so very tight result in the
3:48 pm

election that what does it mean for netanyahu israel along with 7 prime minister. well i mean it's a major setback and he seems to be have be really in a weak position now after this rerun of the elections he failed last time to put a coalition together and he failed to put a coalition to his liking reese would have been a right wing coalition with the ultra also talks of parties and this in light of course over his legal troubles he faces possible indictment over corruption charges and the pre-induction hearings are in october so it's not quite sure you know what scenario you're going to be looking at but if you ask me could supporters say not just quite. prepared to give up on mr netanyahu yet but there's also a sense in israel that nobody wants to see a 3rd election also the president has made clear he wants to proceed. quickly with
3:49 pm

a consultations now and then to toss to the leader who things has the most chances of putting a coalition together turning a crema in jerusalem thank you very much for that update on the israeli elections that let me bring you up to date with some other stories making news around the bond saudi arabia has promised to provide evidence linking iran to saturday's attack on its own industry supply facilities it initially knocked out half of a saudi production yemen's hoofy movement which is that's why iran said it had to use drones to assault state oil company around cause the site. militants have been wounded at least 10 people in attack on a government building in eastern afghanistan they detonated explosives before gunman entered the building in the provincial capital jalalabad then brazed running gun battles with security forces no group has claimed responsibility as yet.
3:50 pm

spanish voters will head to the polls again in november caretaker prime minister better sanches announced new elections after no party was able to form a government with the socialists and led by sanchez won the most seats and april's election but fell well short of an absolute majority in one of your vehicles a little at least 11 people have died in severe flooding in coastal regions of cambodia the high water submerged entire villages and forced evacuation of many 10000 families officials expect water levels to rise further. turning now to south africa on a surge of anti foreigner violence is taking a toll on the country's biggest city johannesburg that's in addition to an economic downturn already hurting the country businesses are keeping their doors closed and visitors are canceling trips to one of the city's most popular areas because of the recent unrest. the johannesburg in the city has been rocked by
3:51 pm

chiefs of violence hanging mobs looting and destroying anything in the park with foreign owned businesses feeling the brunt of the anger. there is nothing that just such a in the form of the stay fit between south africans. the foreign nationals church or that it was dealing with guillotine rather than see if it was a moment when whatever it is the effect has been devastating on my bernanke in a city hub for tourism culture cuisine and entrepreneurship. this is what the damage looks like and go through the big crowd of. people just thrown stones bricks businesses have seen a significant drop in visitors since the un respect damn. putting serious pressure
3:52 pm

on the hospitality and tourism sector is which rely on the city's estimated 5000000 annual visit is. how are we going to sustain this to invest it was with the sort of the chaos that always worries me that will always stresses me out police have increased their numbers on the ground conducting raids and patrols across johannesburg we want to make sure that their parent and last time their people read routing a shops it doesn't it can act in or it doesn't spread at all at the areas where it be remaining in the hot spots or in our the areas that we effect up until we are sure that everything is there to not know my analysts argue the damage is already done this city is the most unequal in the world and it took a long time to begin to get people in the middle class to go and say eat on sidewalks that restaurants and go up in the town and this definitely is
3:53 pm

a psychological barrier to continuing the reintegration of class and race you know are awfully divided cities it's a tragedy. and it's not only restaurants hostels bars and her tells feeling the pinch in a city commerce is taking a serious hit i just have this feeling they might come back my customers as they've been calling me they cannot come and collect the stuff some of the stuff has been damaged so. it's never going to be the same again. although authorities claim the situation is slowly normalizing the unrest has already cost $12.00 lives in the city of gold remains on edge. the european commission president claude younker says a deal to ensure a smooth break british exit from the
3:54 pm

e is still possible but warned that the risk of a no deal begs it is very real at the european parliament in strasbourg you said a no deal would never be the choice of the european union the easiest chief drags if they go see it in michelle been here said the 2 sides should all.
left
right
email Borrow Program
tv